The path of a Handyman to riches

Between Relaxation and Frustration

House Flipper is a simulation about either helping people to change or clean up their homes or finding worn down houses to refurbish and sell them at profit. The PC version has seemingly garnered a positive reception but can it replicate its success at a lower powered console such as the Switch?

Imagine taking care of houses of other people on demand. Clean, refurbish, rebuild, etc. it’s a lot of work but it pays well for saving them the time to do it themselves. 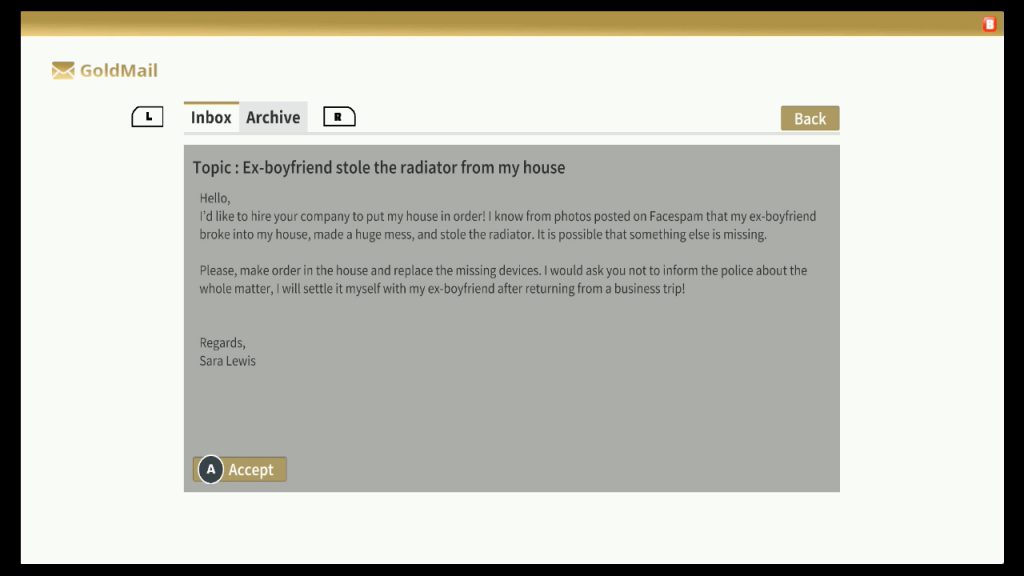 Your Email inbox is open for requests and this is where you will be having your tutorial and go through all your different tools and skills.
The good news is, there is a progress tracker and a map that shows most of your targets. Go to the specific rooms and it’ll show you what you have to do and how much you’ve already finished. Though some missions have too much text and get cut.

So what does it all entail? 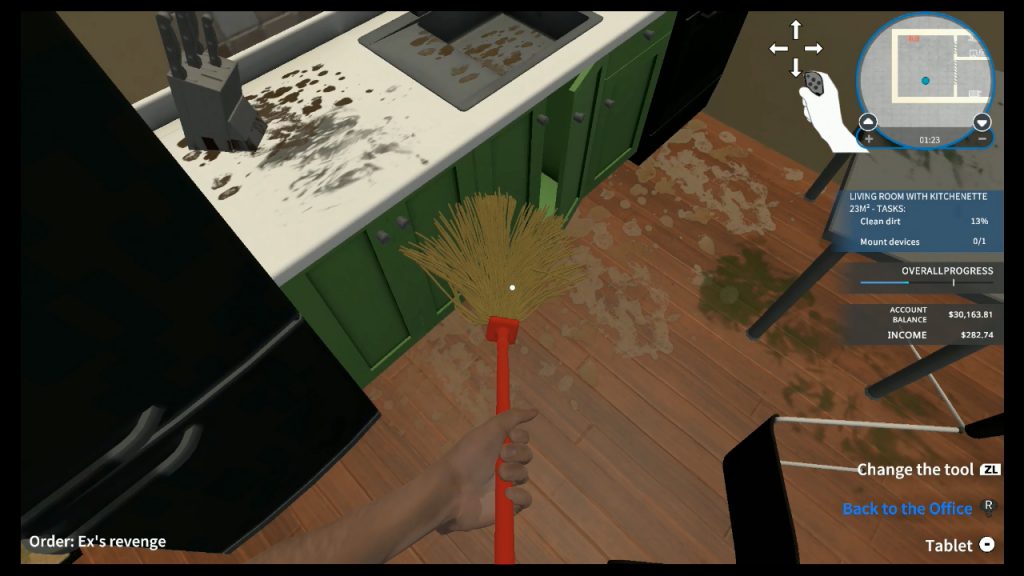 Get your cleaning gear ready as it’s time to get all the stains, gems, and webs out to make it more fitting to live in. Sometimes when you get called for a cleanup, you will start to ask yourself whether there is a human living in that house…
Remove trash at the push of a button but you still have to aim at them. Other things will require specific tools.

You have one special tool for most of it which is nothing more else a scrubber! There are exceptions such as glass shards which requires a button push to switch to the vac.
Another one are the dirty windows that get activated just like the vac as soon as you go in front of a dirty one. It activates another mini-game that requires you to clean it manually with a window cleaner. A bonus to it is you can use the Switch Gyro to do that but it’s not available in handheld mode. 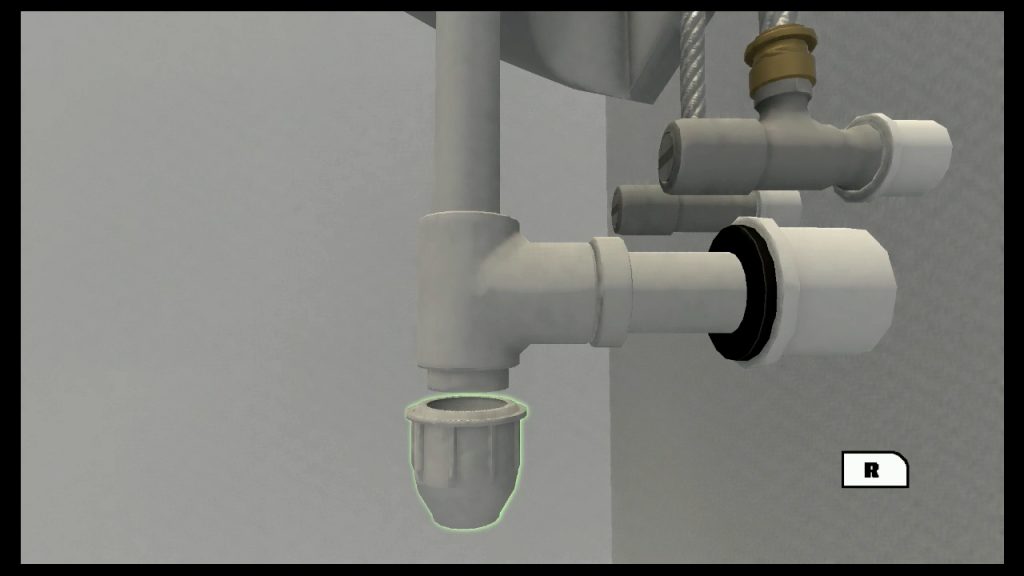 Not everything is as easy and cheap as cleaning. Luckily, you don’t have to wait for things you order to arrive. You can install things such as radiators to specific spots that have the required connections. Each of them will initiate a mini-game that requires you to push and hold specific buttons that are prompted.
Make sure you have enough money in the bank as you have to front the money first before sending in the invoice for your job!

Walls and Selling
Break’em! Sometimes things aren’t just suitable for the current plans like getting a new family member. This calls for some drastic measures like tearing down walls. Pick up your hammer and make the walls regret ever standing there. There’s no need to be afraid of getting the wrong ones because it’s marked on your radar. Doors are going to be your favorite obstacles as you can sell them for some profit. Just use your selling tool and beam them away!
I fully recommend getting the hammer upgrades as soon as possible to increase efficiency and less time-consuming. These walls are split into strips that have in the last 3 parts. Hammer them down and don’t worry about the clean up as there’s no need for it.
What you taketh, you can also maketh. You can also build up walls to create new rooms and it’s easier than breaking them. Just make sure you have your doors ready put down because you don’t want to waste time in tearing your freshly build walls again. 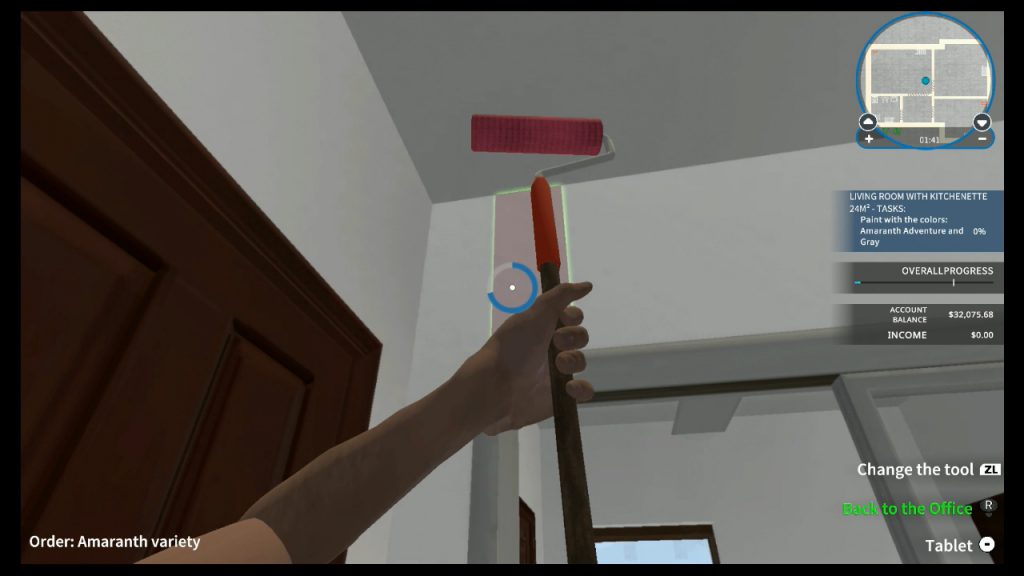 Get a lot of paint and your paint roller ready, there’s a lot of work to do. So how does this work? All of the walls are separated into strips like when you’re building them. Since this is a simulation you have to buy the paint and keep refreshing your roller.
Make sure you use your level up points as soon as possible because there are very important upgrades to unlock. Like limiting the use of your paint to non-painted areas. Another important one is to be able to paint multiple strips at once. Without them, it’d a huge time waster, especially with the Switch controls. 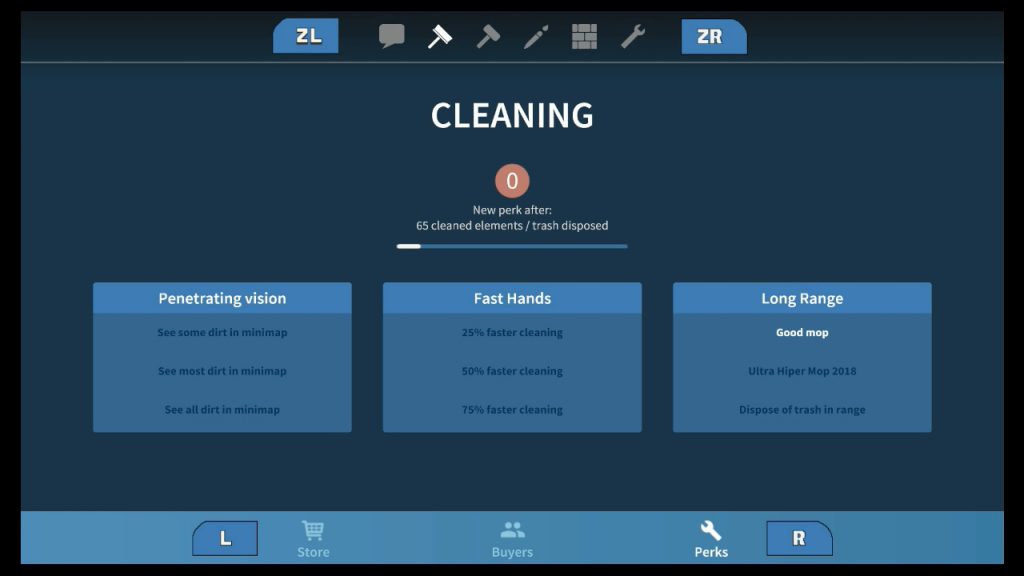 Tiling and Wallpaper
This one is practically an even more tedious version of the painting job because you have to buy the piles of tiles and put them on the wall one by one. No shortcuts, no multiple at once. Back and forth.

Decorating
This is just a mix of your skills and finding the right objects to place. When you’re flipping houses, you can let your fantasy run wild for a little bit. 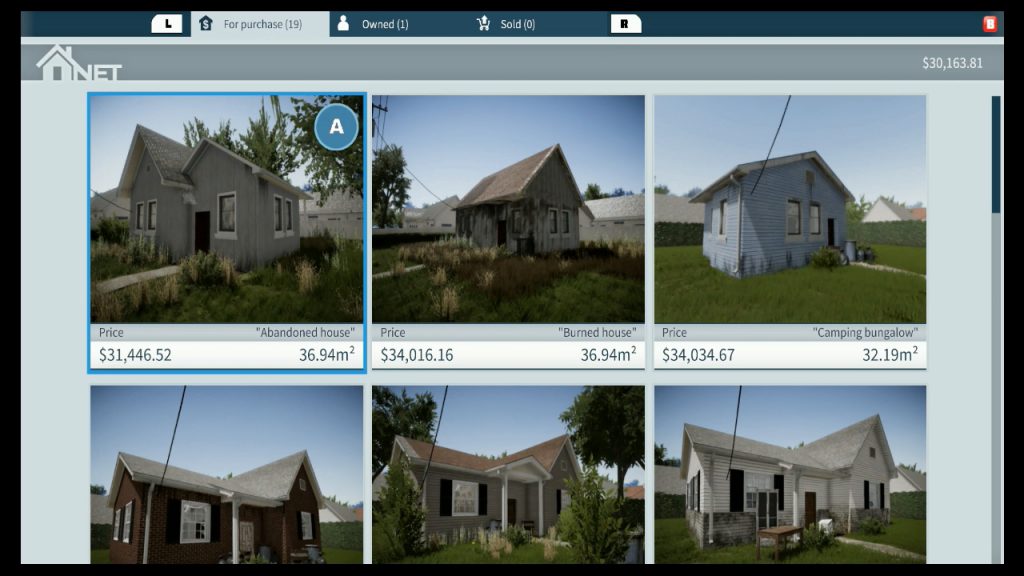 Ok, this is where the name of the game comes in. You buy houses that are close to being a dumpster and make them habitable and hopefully beautiful once again. Here comes the kicker. You have multiple clients that will be vying for your remade house. Each of them will value different things and you can see their reactions on the left side while you’re doing your job.
You won’t know their needs in the beginning but the more you sell the more you know about their preferences. The more of those preferences boxes you tick, the more it’s worth. Once you’re finished it’ll be auctioned off and you can see the different bids. 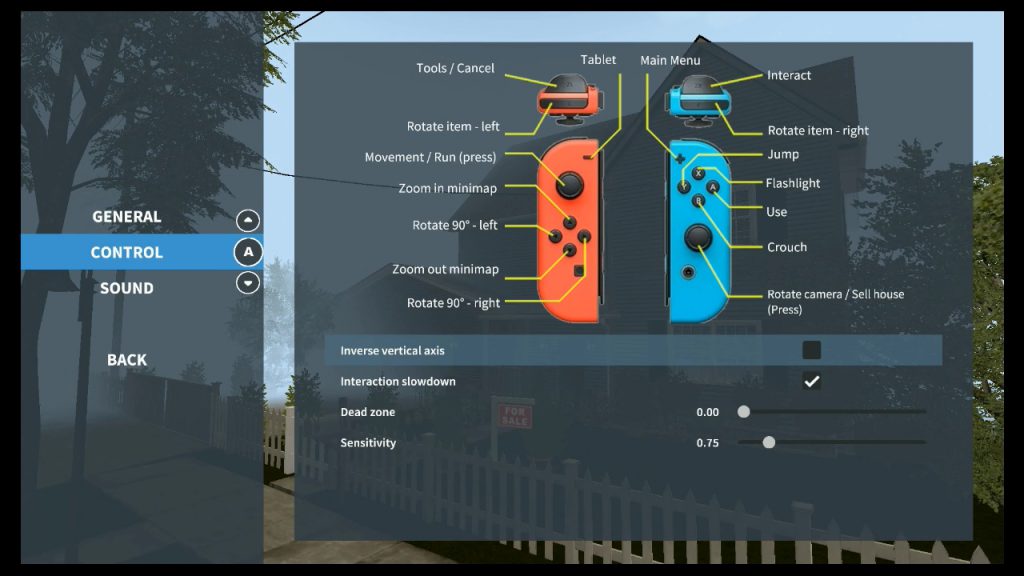 This is the elephant in the room. Some games are made for PC and Consoles in mind, then there are rare ones that go above and beyond for Consoles (Diablo 3).
House Flipper is neither. It doesn’t have any “auto-aim” to support you and all buttons are in use. What makes House Flipper on Switch so egregious is it’s comparable to a Hard Mode because the controls are imprecise and the options can’t solve it. Make your stick sensitivity too high and you will overshoot, make it too slow and it gets extremely tedious (remember the painting and tiling?).
There are painting perks that will take care of the overshooting but tiling? Not so fun. The biggest issue is the lack of precision that makes it more difficult, tedious, and frustrating. You will immediately notice that this is specifically made for the PCs Mouse with very little consideration for the Controller. 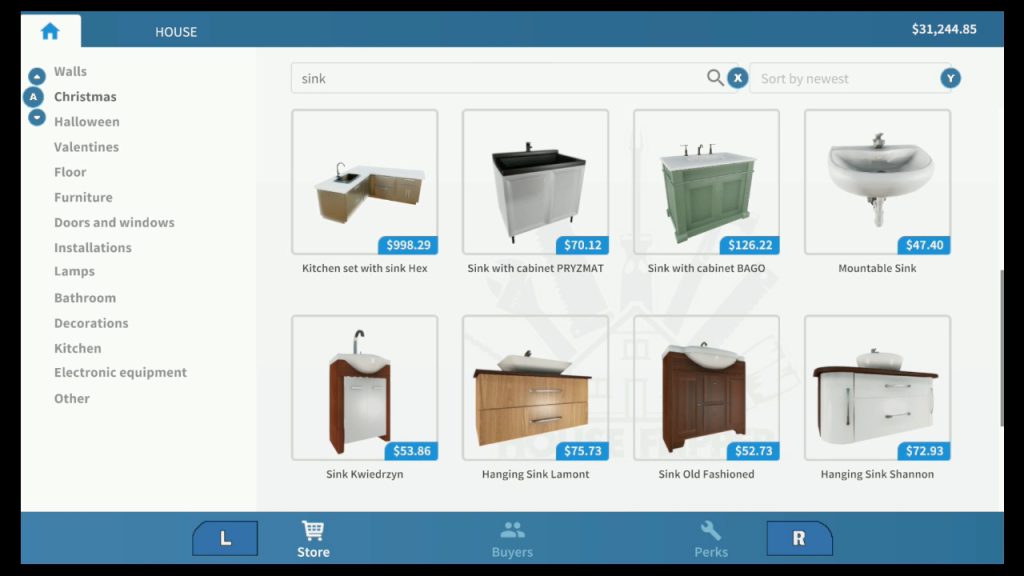 The store controls get another special mention here because the store is stacked with a lot of items. Not only are they notably laggy, but you also have to input words for a manual search. Yes, you can use the touch screen but it’s not an option when it’s docked and even then it’s not optimal. It’s without a doubt made for the Keyboard.

If you’re somebody who doesn’t mind taking extra time to get things done then it won’t present any issue for you.

The first thing I want to talk about is performance. Even docked it won’t be fixed 30 FPS. Expect some dips and a lack of smoothness.

Graphics have taken a big hit due to the limited power inside the machine. If I had to make an estimate it should be at around the PS3/360 generation and even then it’s certainly not on the upper echelons. Very modest but doesn’t have any effect on the gameplay. If you like nice graphics, this isn’t going to be interesting for you.
As for Sound? There isn’t much to talk about. The sound effects are fine and like with most Simulation games it comes with elevator music to accompany your mundane work.

Initially, I was looking forward to trying House Flipper because it has a very interesting premise of working on a house. But once the game started, came a revelation… the controls are not optimized for the Controller.
In that aspect, it’s a game where your miles may vary. The simulation aspect has something relaxing to it if you can overlook the controls.
My recommendation is to get the PC version if possible. The switch version is less than an optimal version of it in every single aspect. Make sure what you’re getting into before pulling the trigger.
In that regard, I’m giving the Switch Version a Save for Later as a middle ground.