Having a problem of paranormal nature? Detective McQueen and Officer Dooley are on the case.

We are Detective McQueen, and together with our good friend Officer Dooley we are in charge of a special division of police department – to handle the paranormal cases. The game is split into separate cases, all of which are happening within the same city. As we complete each case, we unlock the next one. Don’t be expecting the game to take itself too seriously though. Strap yourself and get prepared for a casual, light-hearted fun full of silly humour and witty one-liners. 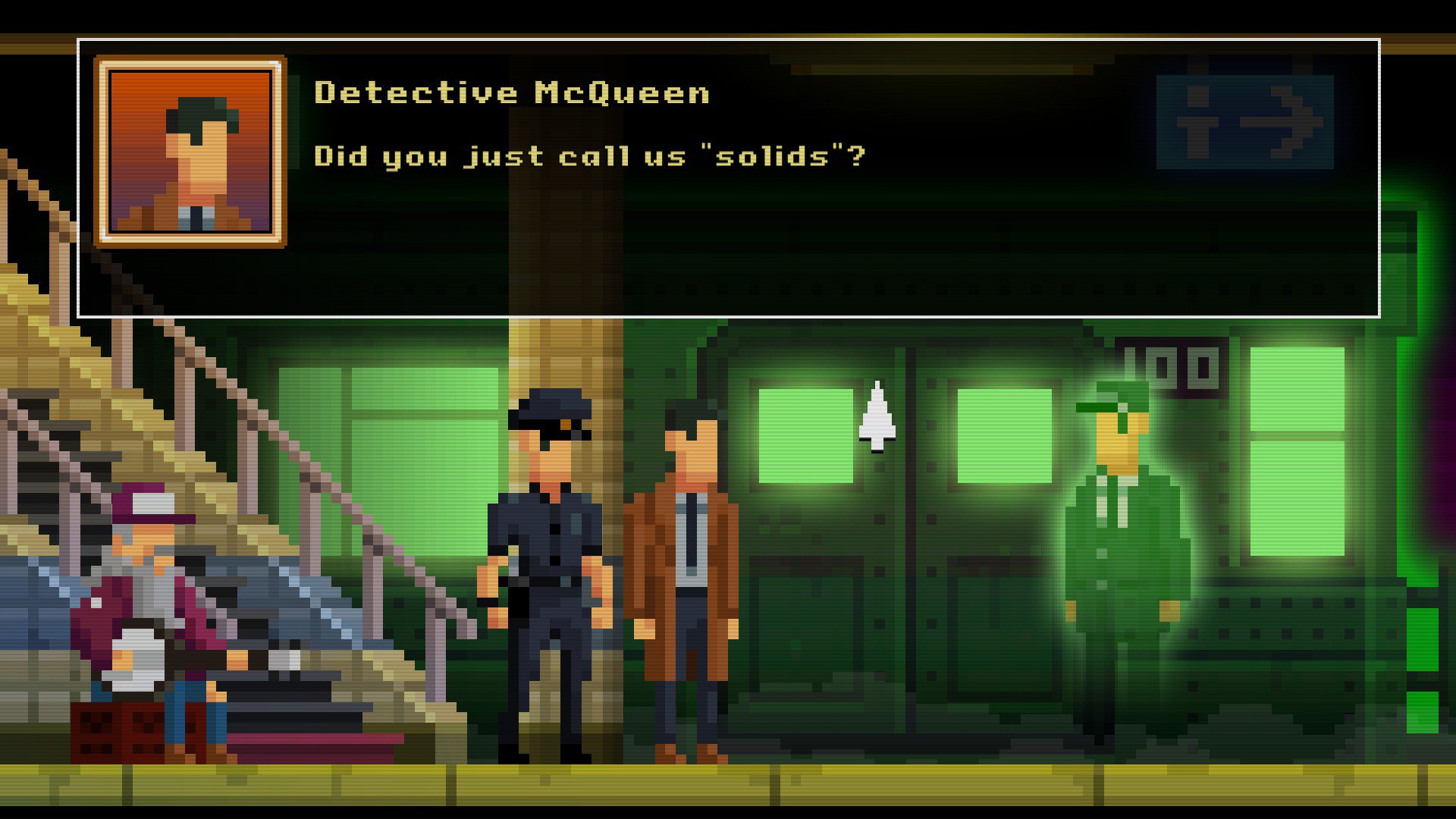 The story has us tackle 6 separate cases involving paranormal events, from the original release, plus also 3 extra cases that were added in further updates, making it a total of 9 cases! The cases aren’t particularly long and each one will probably take you between half an hour to an hour. They are full of humour and various references to pop culture. 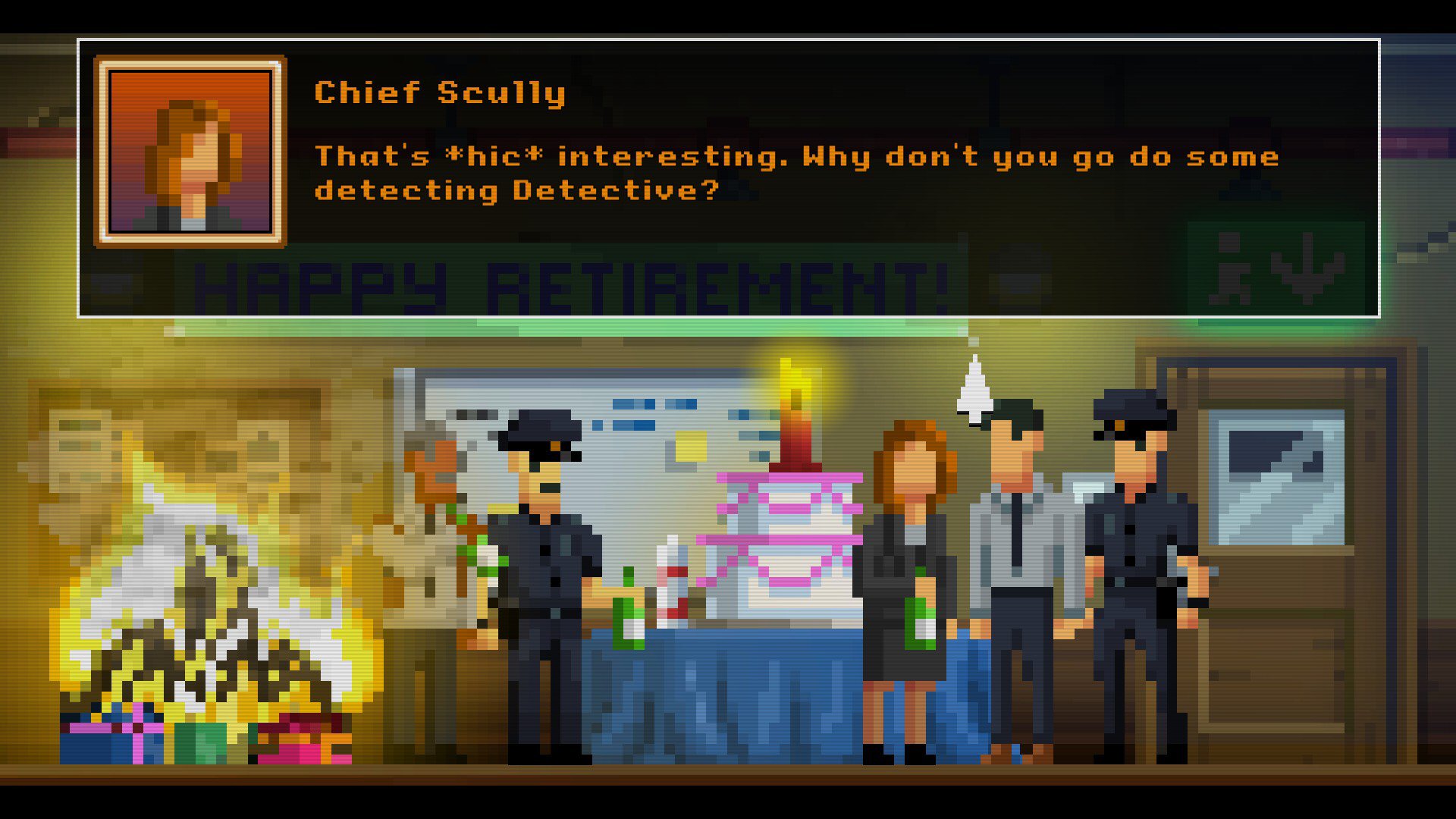 For a small game like this that doesn’t take itself seriously, it has a surprisingly well-crafted world. Each case we handle might seem like an isolated incident at first, but they’re all connected to the lore involving a parallel world that exists in the game’s universe.

The characters are also developed well. They all have fun personalities and a good chemistry with each other. And their comments on events or parts of the environment can be hilarious. This goes especially for Officer Dooley, who is our sidekick and is with us on nearly every investigation. 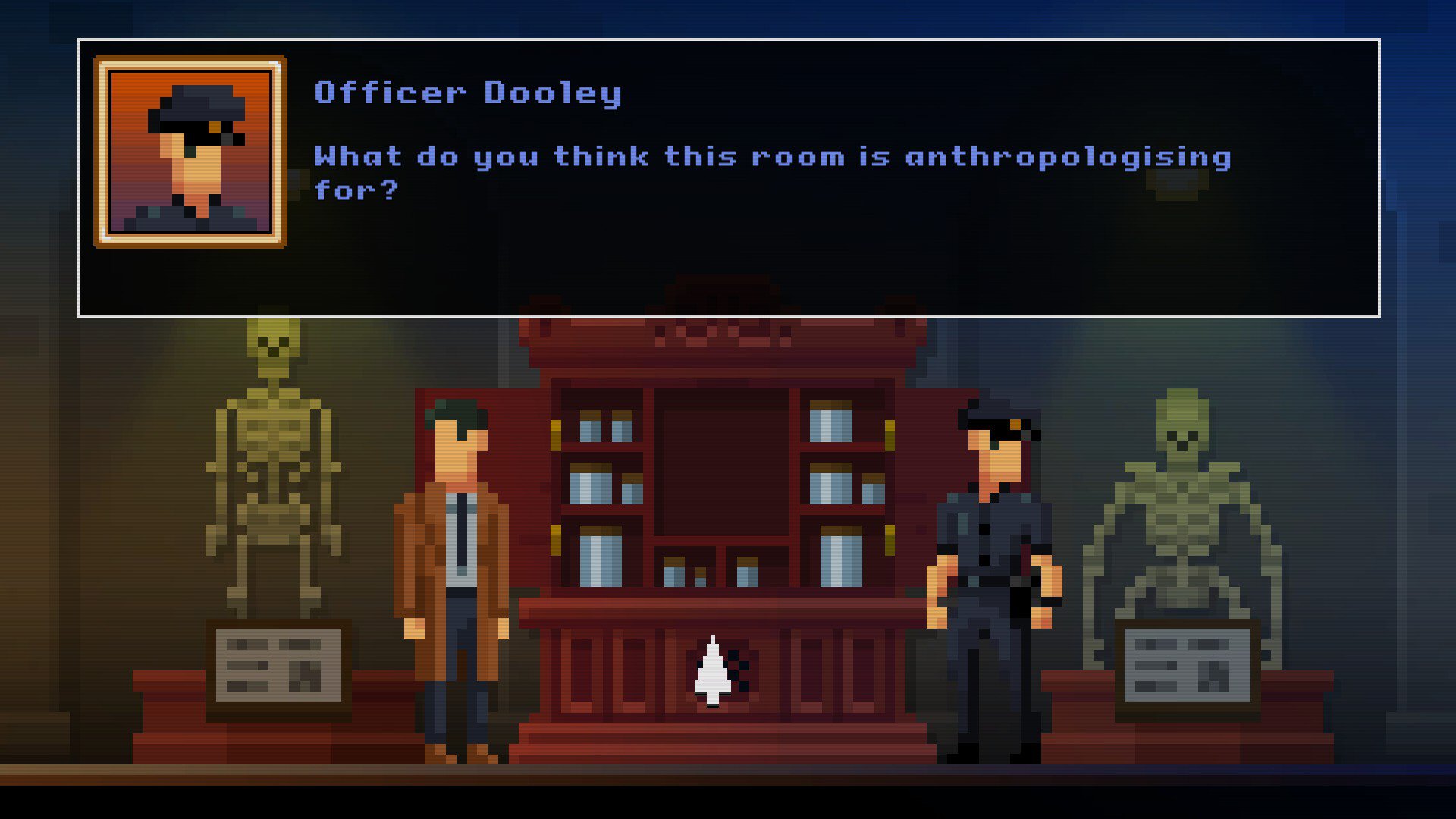 The gameplay is a simple point-and-click. We interact with the environment, hear one of our characters make a witty remark, and at times grab some items to keep in the inventory for use later. There is nothing over the top difficult here, though with some puzzles we do need to use our brain and come up with a plausible solution. Most puzzles are intuitive and there’s a good feedback from the characters to the player if we’re missing something. If we’re missing something and try to use an item on a part of the environment, the main character will hint on that. 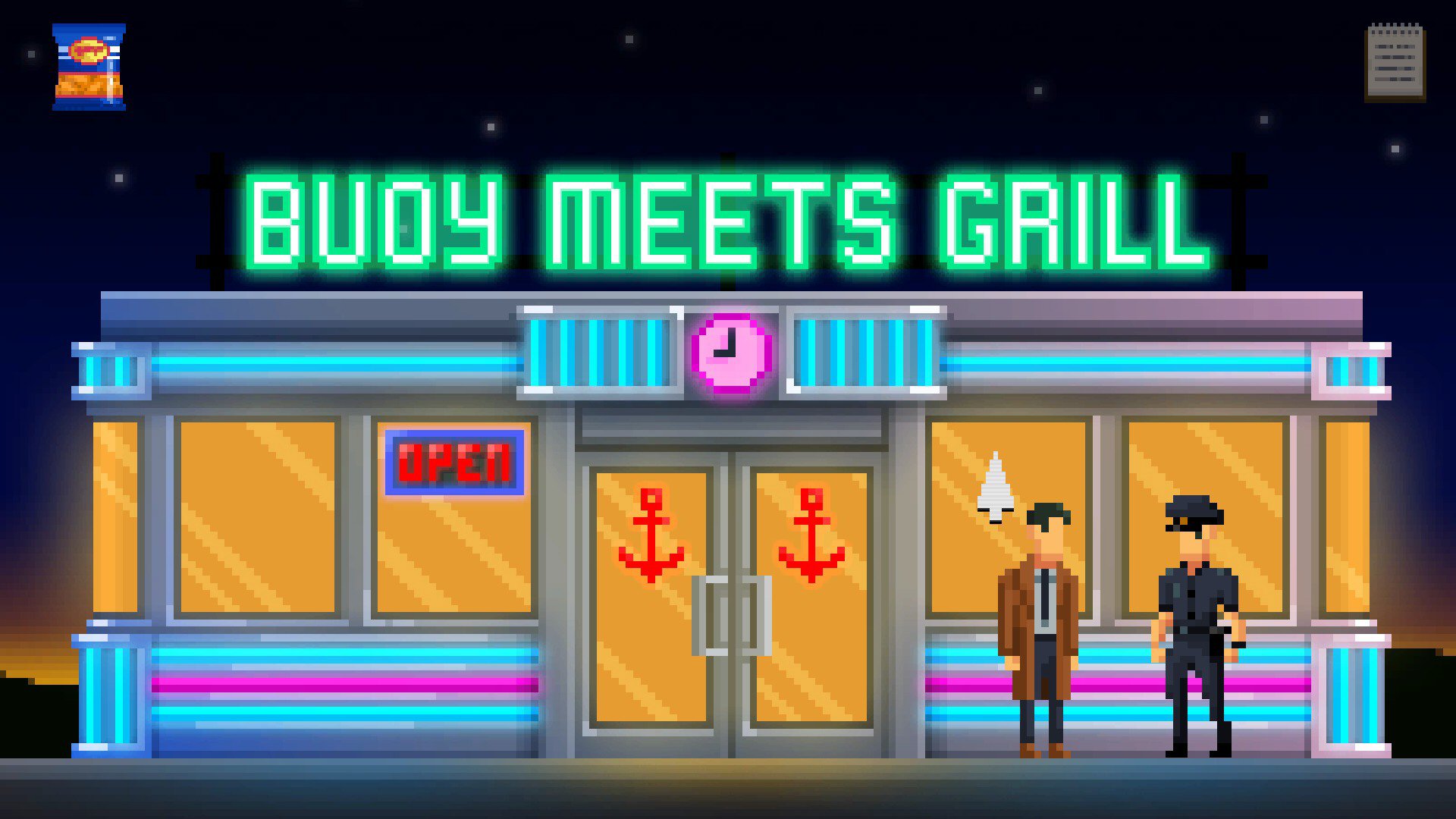 A few parts could leave you stuck for a bit, mostly because the main character wouldn’t pick up some items until a certain point during the case. So you’d occasionally need to revisit the rooms you’ve been in before and try to interact with the same items again. The timing with this can feel a little unintuitive, and it makes you wish you could pick up some items whenever you first come across them as they look like they can be useful later on.

Some of the puzzles take form of fun minigames, such as picking a lock with some broken dinosaur bones, matching correct symbols to perform a ritual, or trying to outsmart a computer virus. These are all really fun and are executed well. 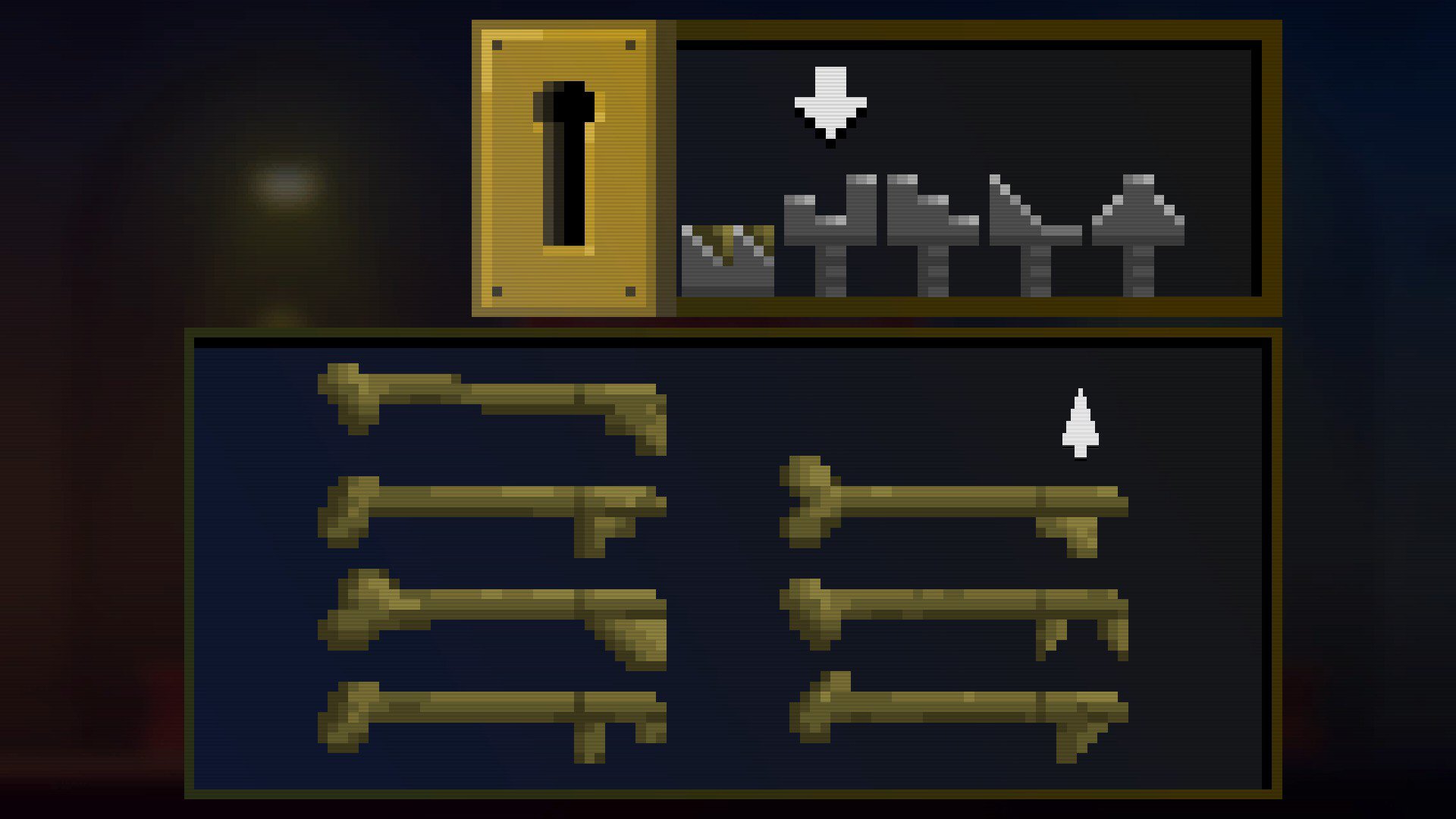 There are also dialogue options to pick when talking with NPCs, though these aren’t story choices. Rather they are all part of gathering of information that we need for solving the present case, so you’d normally go through every dialogue option with each NPC.

The visuals are designed in a somewhat simplistic but charming pixel art style. They might not be on the level of beauty as some other pixel art in indie games nowadays, but they serve the nature of the point-and-click gameplay and a light-hearted story well enough. The environments are all colourful, the levels are easy to navigate through, the characters all look distinct and have features that make them stand out, and the use of different coloured text makes it easy to go through dialogue and know who is talking (yes, this is something some games forget to use to their advantage).

Music is also quite simplistic. It fits in well with the old-school retro visual style and it’s atmospheric enough to keep us immersed in each mission. There’s no voice acting, which for this type of game is certainly not necessary. 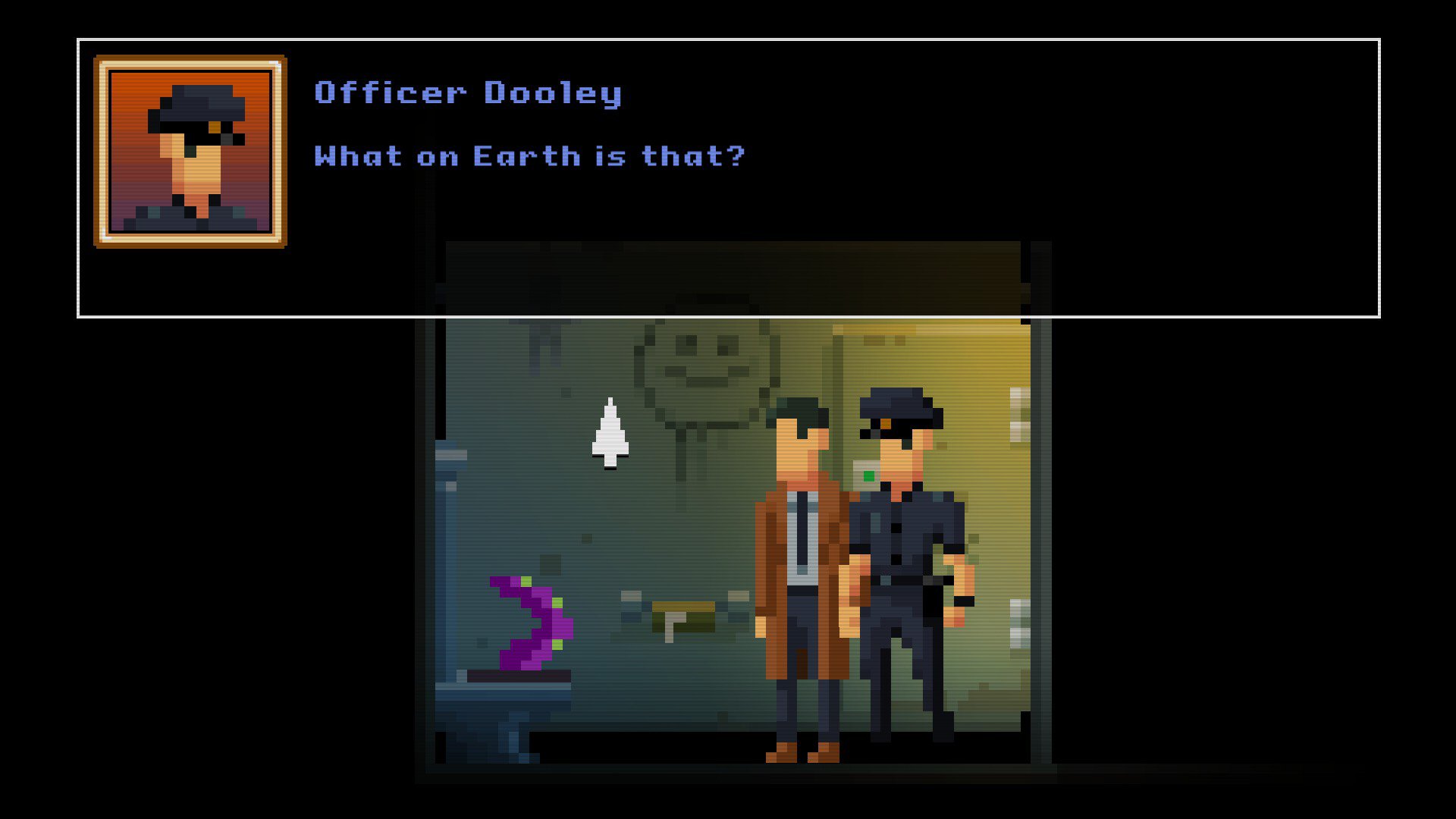 ‘Darkside Detective’ is a fun and light-hearted point and click adventure that is good for passing the time and getting a few laughs. Each case you do is like an episode of a comedy TV show. In that sense, it will likely be more fun to play in shorter bursts, such as 1 hour at a time. It’s the kind of game you can jump into really quickly and not worry about trying to remember what the heck you’re supposed to do.

Season 2 of ‘Darkside Detective’ has already been in the works and is planned for release later this year, so that is something to look forward to for those who have enjoyed this first game.

I’m giving this game a ‘Save for Later’ rating because I think it’s relatively simplistic and doesn’t do anything extraordinary to set it apart from other games in the genre. However, it is a nice little game that can deliver a lot of fun, so I’d consider it a high end of ‘Save for Later’, and perhaps once the sequel comes out, the whole series can be a solid ‘Save’ rating.