Mask of Mists is a very enjoyable exploration based puzzle adventure game. I personally loved it and would gladly recommend it to any fan of the genre.

Mask of Mists is an exploration and puzzle based adventure game that has some light action adventure elements as well. The game is split into various areas and includes some Legend of Zelda-esque dungeons. If this sounds like something you’d be interested in, do give this review a read, I’ll be covering various aspects of the game.

Truth be told, the story to Mask of Mists takes a bit of a back seat in this game. It focuses more so on its gameplay and puzzle solving elements than its story, and its gameplay is quite solid making it quite fun. We’ll get into that shortly though. The backstory to the game revolves around an archmage who has gone missing, and you’re hired to investigate his disappearance and bring him back. This investigation leads you to various areas around a small town, which has since been abandoned. Getting to each area often requires you to solve an item based puzzle in order to proceed. Most puzzles in the game are pretty simple to work out but others can be pretty sneaky. Word of advice, look up from time to time. Some story is told through notes left around the game world which also act as hints on how to solve various puzzles, so definitely check your journal if you get stuck. It’s also worth mentioning that there’s a secret ending if you collect and place all 10 stone masks in the game. You must do this before you enter the portal at the end of the game though.

One of the game’s most often visited areas are its dungeons. There are 6 dungeons in total and at the end of each one, you must activate a navigation crystal. These crystals are your main objective in the game, well, they’re the only objective in the game to be more precise. The dungeons have a variety of different puzzles to solve and there’ll be a few monsters to fight along the way as well. There are no bosses at the end of each dungeon but there is a final boss at the end of the game. The dungeons were pretty fun to work through though, and if you’d played The Legend of Zelda, you’ll know what to expect from them.

I normally enjoy a lot of color in the games that I play and Mask of Mists definitely hits the fantasy feel on the head. The game’s graphics are quite excellent and it looks superb at 4K resolution as well. The game’s graphics almost feel cel-shaded at times, the dungeon photo above is a good example, but they do fit the game very well. Dungeons and caves felt quite atmospheric due to their lighting and fog effects, below you’ll see a screenshot of one of the caves in the game.

Audio wise, it was pretty good too. The music fit the game very well, and the sound effects weren’t bad either, nothing to write home about, but they weren’t awful. 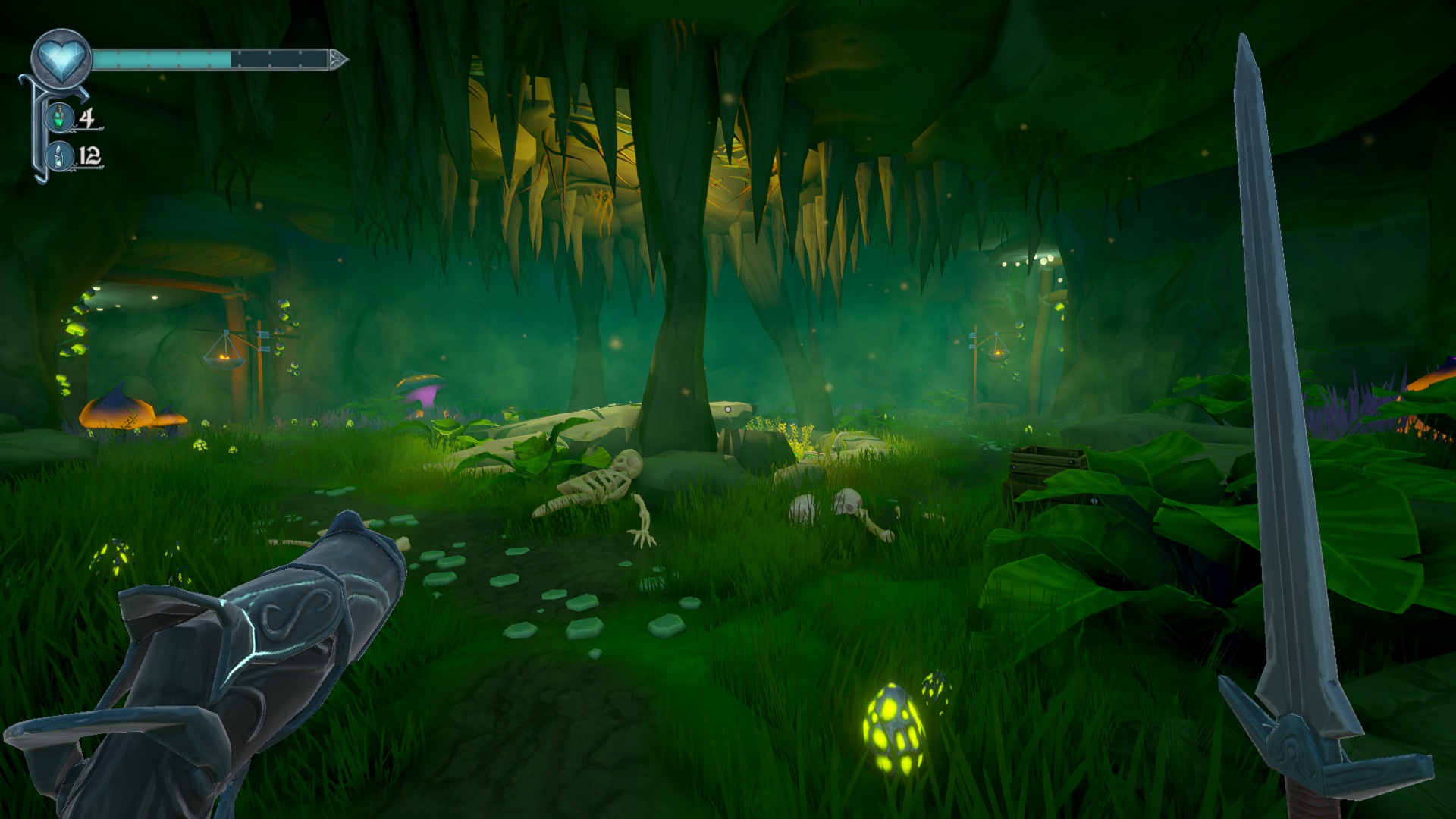 Overall, I enjoyed Mask of Mists quite a bit in the end. The game took me a little over 5 hours to complete but I breezed through many of the puzzles so it may wind up taking anywhere from 4-7 hours depending on how quickly you can get through the puzzles. It’s a pretty straightforward game and a relatively linear one as well. I honestly have nothing against linear games though as I still feel they have a place in the gaming industry (Not everything has to be open world). Mask of Mists does give you a fairly large area to explore, lots of puzzles to solve and it’s quite the enjoyable journey throughout. What more can you ask for in an adventure game. So, I’ve decided to give this one a SAVE, I loved it and would gladly recommend it to fans of adventure games.