Wow, the Principal really does hate his students.

Back in 1981, a particularly snowy winter settled down upon the area that those attending a boarding school called Wintermoor Academy won’t ever forget. Did that particular winter set a new record or were the students snowed in that made it memorable? No, something worse. Like many other schools, Wintermoor Academy lets their students form and be a part of clubs so they can meet people with similar interests and do activities alongside their schoolwork. The clubs here range from the normal Knitting Club to the strange Psychic Detectives Club. However, this all changed one day. 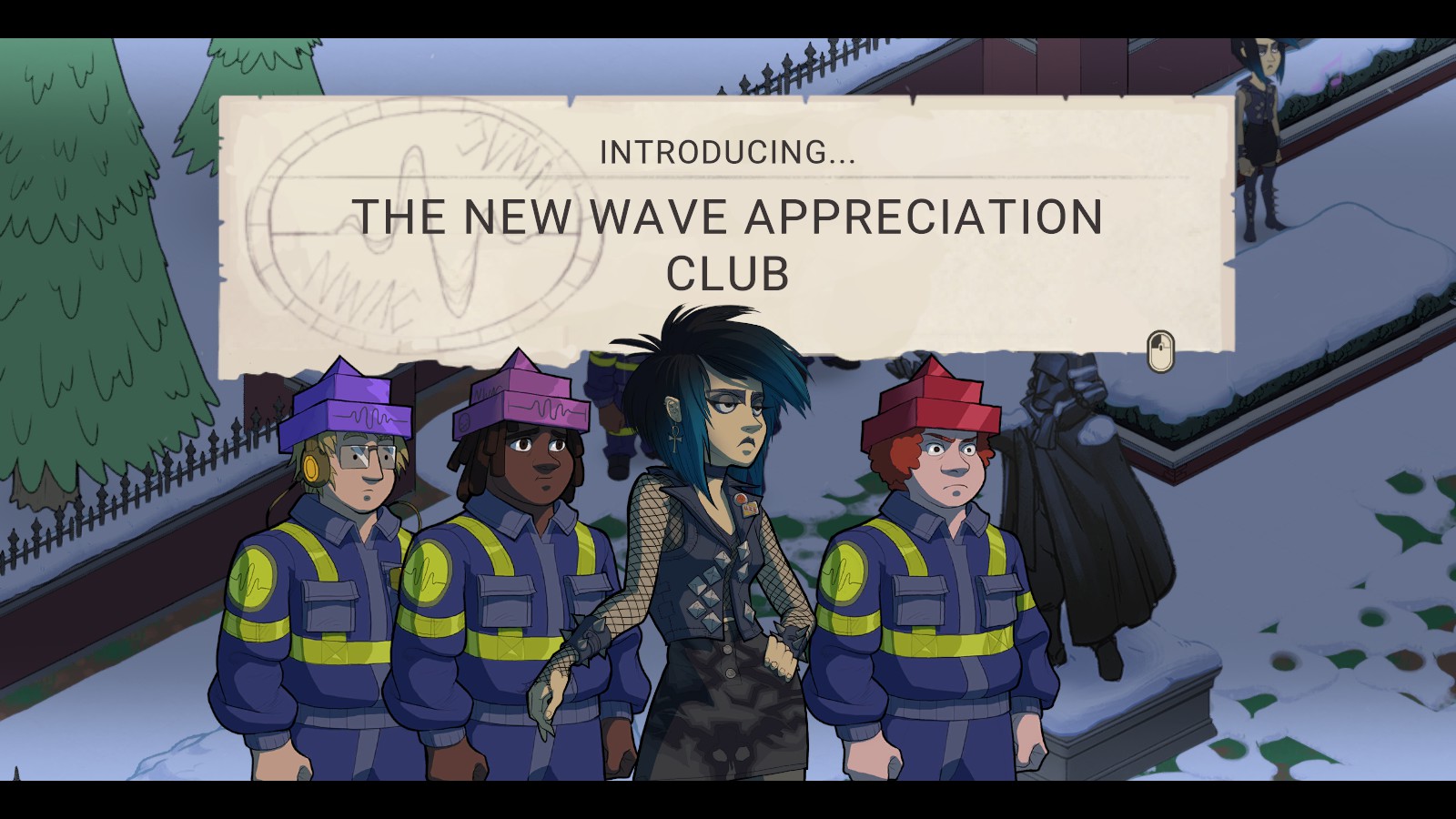 As we’re going through what happened during the fateful winter of 1981, we follow one student named Alicia and the club she was involved with called Tactics Club. Tactics Club, made up of Alicia, Collin, and Jacob, revolves around playing a tabletop role-playing game called Curses & Catacombs (or C&C). However, one day Principal Enfield called for an assembly for all of the clubs and, you guessed it, it wasn’t good. He announced a snowball tournament that all clubs must participate in. If your club is the one that lost, it must disband permanently. With only one club able to be win and be deemed as the Ultimate Club, the Tactics Club is dedicated towards winning so their sense of belonging can stay with them throughout their school years. 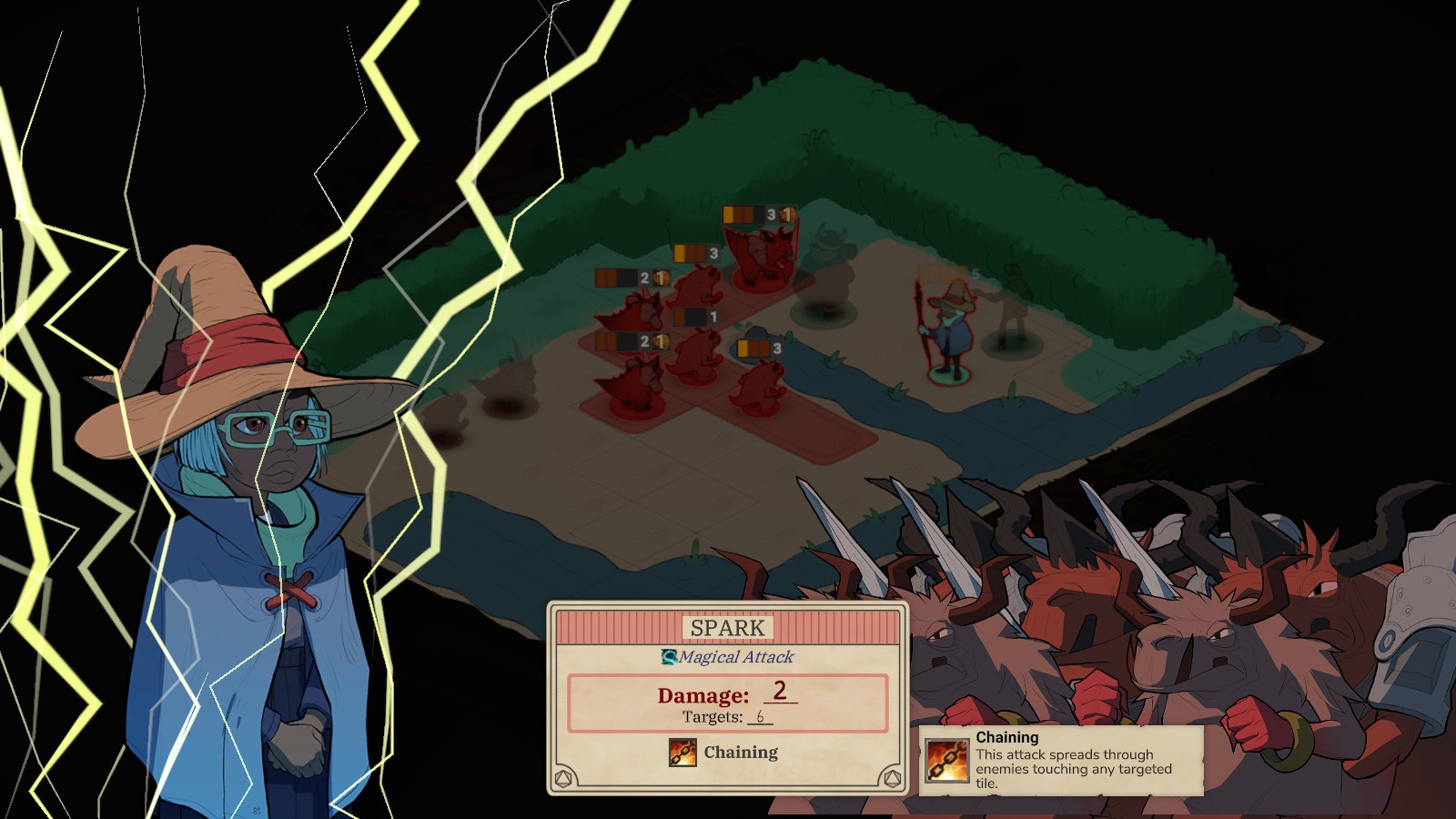 The majority of battles in Wintermoor Tactics Club takes place in the club’s C&C campaign that Collin runs (and occasionally Alicia). Thus, combat takes place on small, tile-based maps the replicates what it would look like if it was drawn on paper. Every turn gives each active team member and enemy a chance to move and attack if they’re able to. Each character and enemy type has their own abilities and quirks that goes along with their design. Each enemy type (including enemy club members) also has their own qualifications for who they’re targeting (like targeting whoever is closest) and will show you who it’ll be. Though, your team in particular has special combat abilities called Tactics Power. However, Tactics Powers can’t always be used as they have a one turn cooldown timer and you need enough Tactics Points, gained by successfully injuring enemies. Going over our main three: Alicia plays the mage Anjaya who can cast a ranged chaining electric attack with a strong line attack Tactics Power; Jacob plays Rogey the rogue that is quick on his feet with the ability to kick away or pull enemies as well as throw a damage reducing smoke bomb as a Tactics Power; and Collin is the paladin Eodwald with the only character with armor, can taunt the enemy with his attack, and does a skull cracking Tactics Power slam that dazes enemies caught up in it. 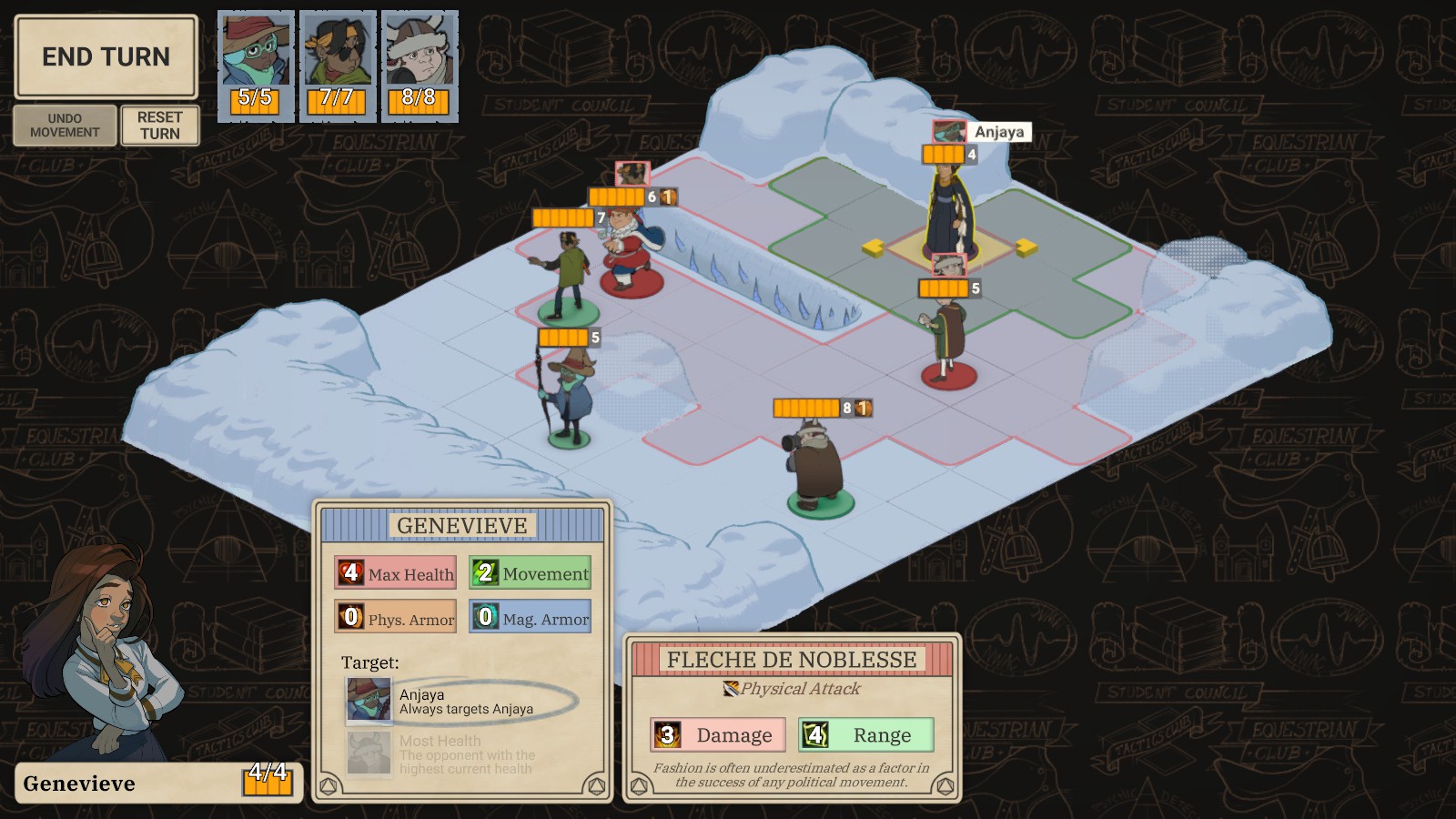 When it’s time to go head to head with another club for the snowball tournament, the school field where it takes place is re-imagined as a C&C board. So while your characters would be throwing snowballs in reality, you’ll still have access to each character’s abilities as well as a familiar set up. 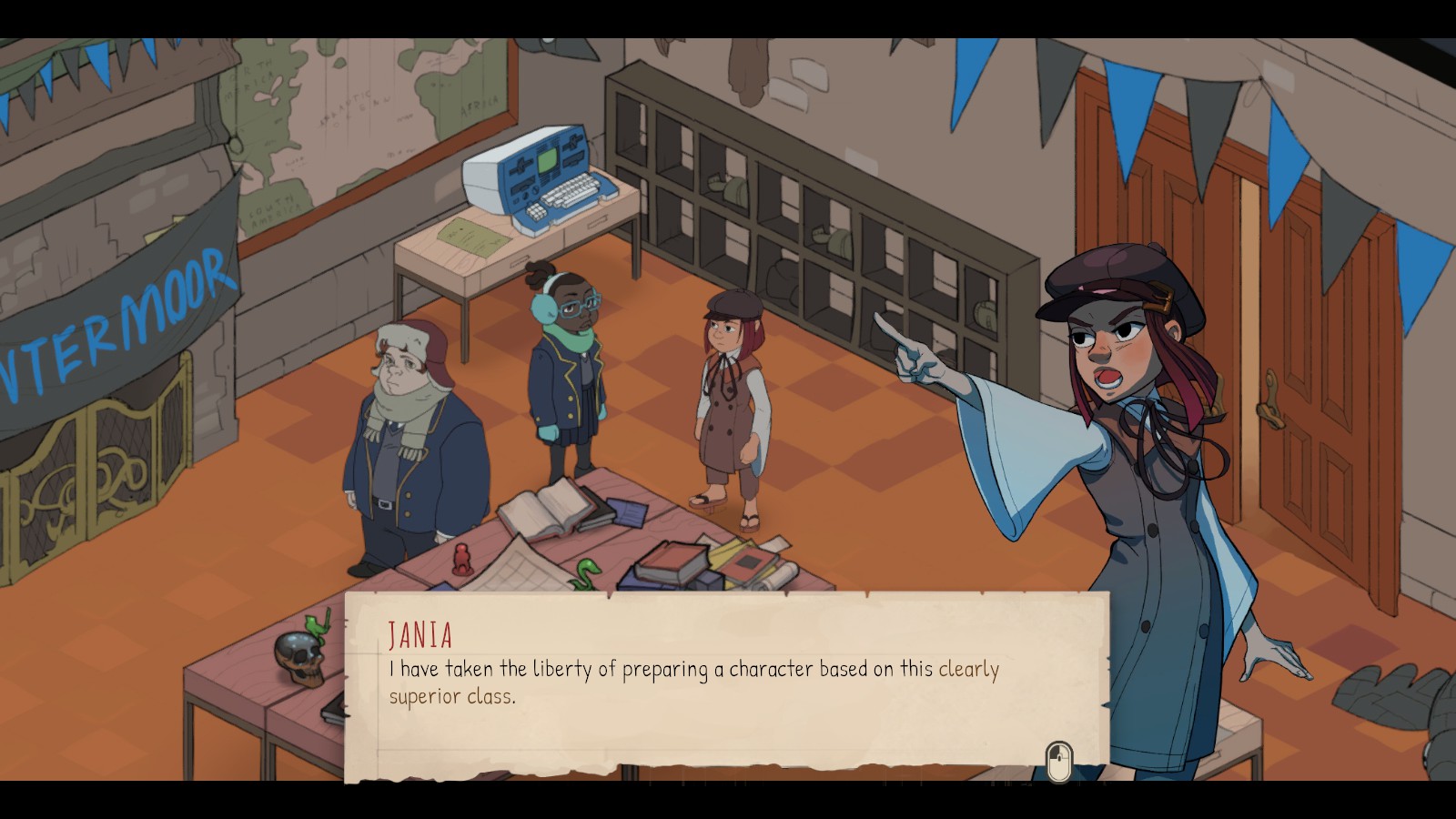 Your club does get more members over time, so you won’t stay with only having three characters to choose from for long. Each time someone new joins, you’ll be able to introduce their C&C character and hopefully help out with their personal problems with a campaign Alicia writes (with the help of you choosing between various options). Not only giving that new club member a sense of belonging despite just joining, but also introducing the player to their character abilities. The new characters are pretty helpful, unique to the others, and comes with their own pros. For example, the first new club member has a ranged, AoE attack that lowers magic resistance and a chaining Tactics Power that forces an enemy to target their own teammate. 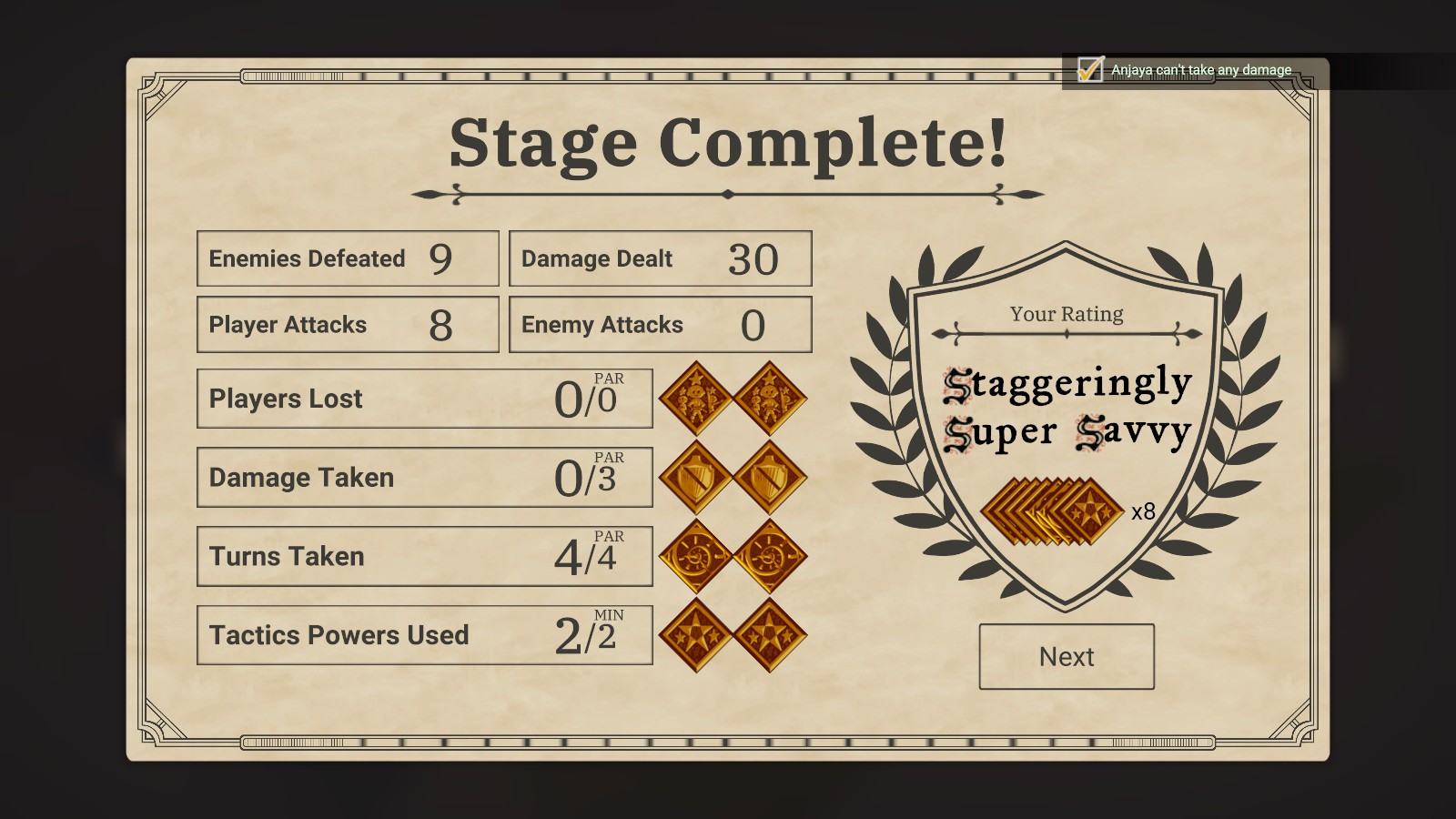 After you complete a battle, you’ll be awarded medals based on your performance in various categories like how many turns it took you or how much damage your party took overall. The maximum/minimum amounts vary depending on the battle, but if you’re planning on getting all medals, you’ll be up to a challenge as some later battles does get a bit tricky. On the other side, if you’re having trouble with a particular battle, you’ll also get the option to activate a No Fail Mode so you can continue on with the story if you so wish. Of course, you could also mess with enemy/party health in the options as well.

Unlike other turn-based tactical RPGs, Wintermoor Tactics Club does not have a leveling/experience system in place. While there are going to be people that won’t pick this up based solely on this, I honestly didn’t miss it. It was nice playing a casual tactical game for once where you don’t have to worry about keeping everyone’s levels up or worry about permadeath if a character is defeated in battle. So how are the characters going to get more powerful later on if not by leveling up? Well, each character has unlockable equipment and an unlockable Tactics Power. 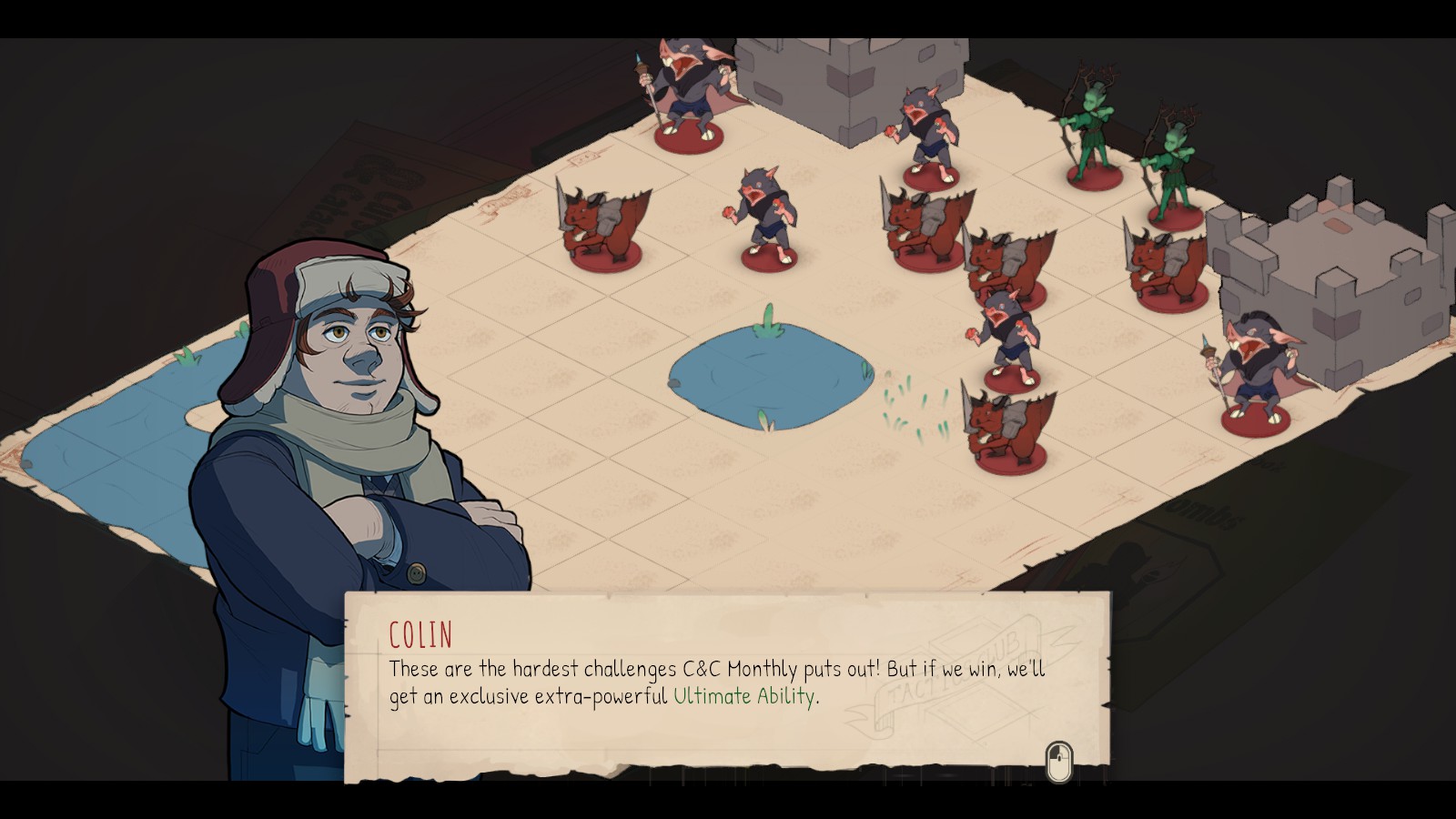 As you’re going through the story, Challenge Levels will pop up for individual characters. First Crucible Battles and then Mastery Battles. These challenge battles gives you a challenging scenario, like not letting anyone but this one character take damage, and you’ll get a reward if you manage to win. You’ll first be given Challenge Levels that grant you new equipment for the target character, but later on you’ll be rewarded with a new Tactics Power (although they require double the points to activate). 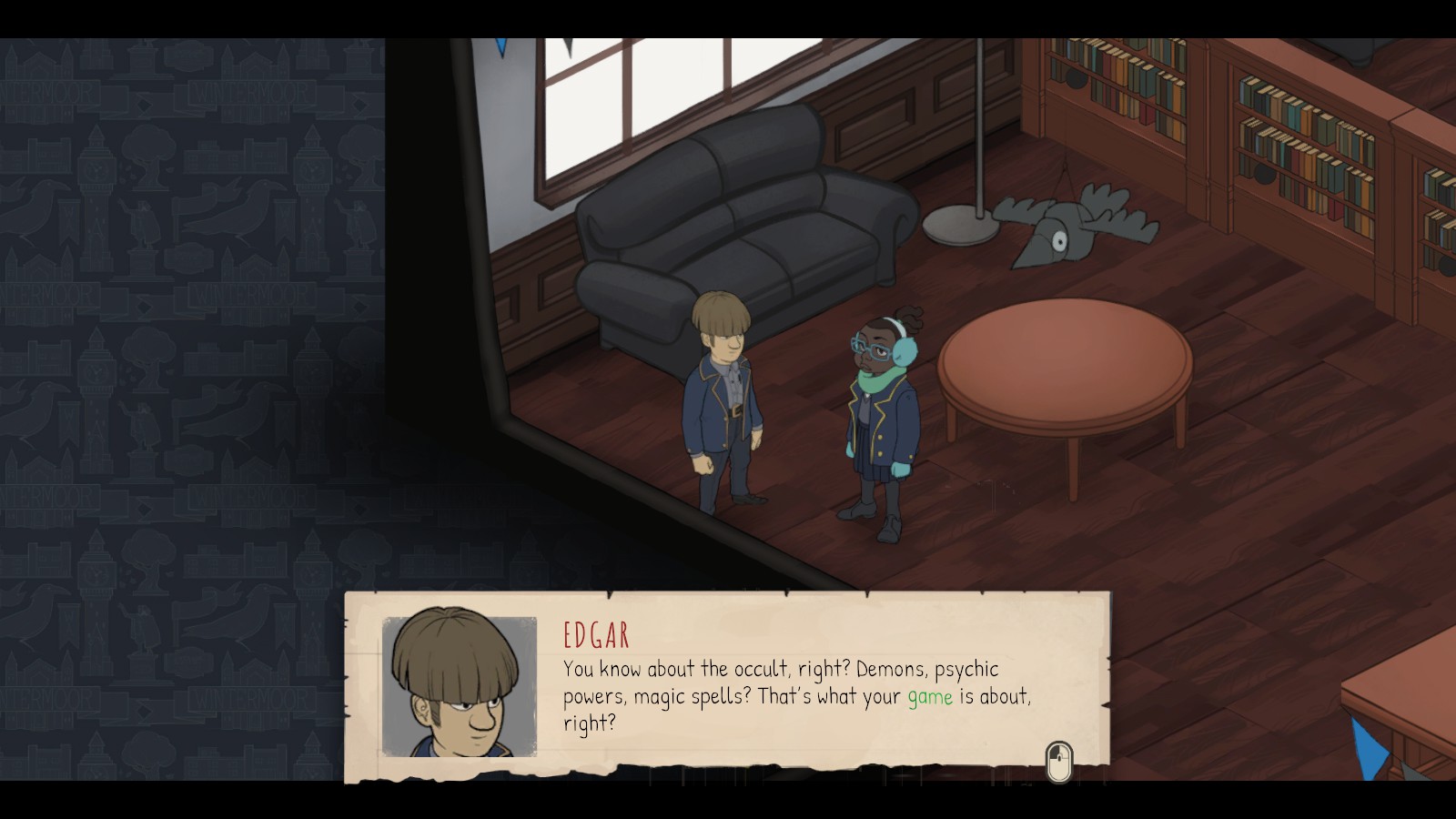 Between C&C campaigns and participating in the snowball tournament, you have free reign over where you want to go within Wintermoor Academy. In each location, you’re able to talk to your fellow classmates as well as examining anything that gives you the option. Sometimes, a character will have a side quest for you to do (which you’re alerted by both the map and the equipment list). These side quests do mostly involve you running between locations and talking to characters, but you’re rewarded with new equipment and new interactions (well, if you enjoy the characters in Wintermoor). Equipment can give an ability a new affect or even give that character a new ability to use. Since Wintermoor Tactics Club doesn’t have a leveling system where you have to choose between abilities or specialties that a certain character will be stuck with, it lets you swap equipment as you see fit. So if you find that a certain equipment won’t necessarily help you in a battle, you can easily switch it out with one that will when you reset the battle. Not to mention that later on, you’ll be given access to Specializations. 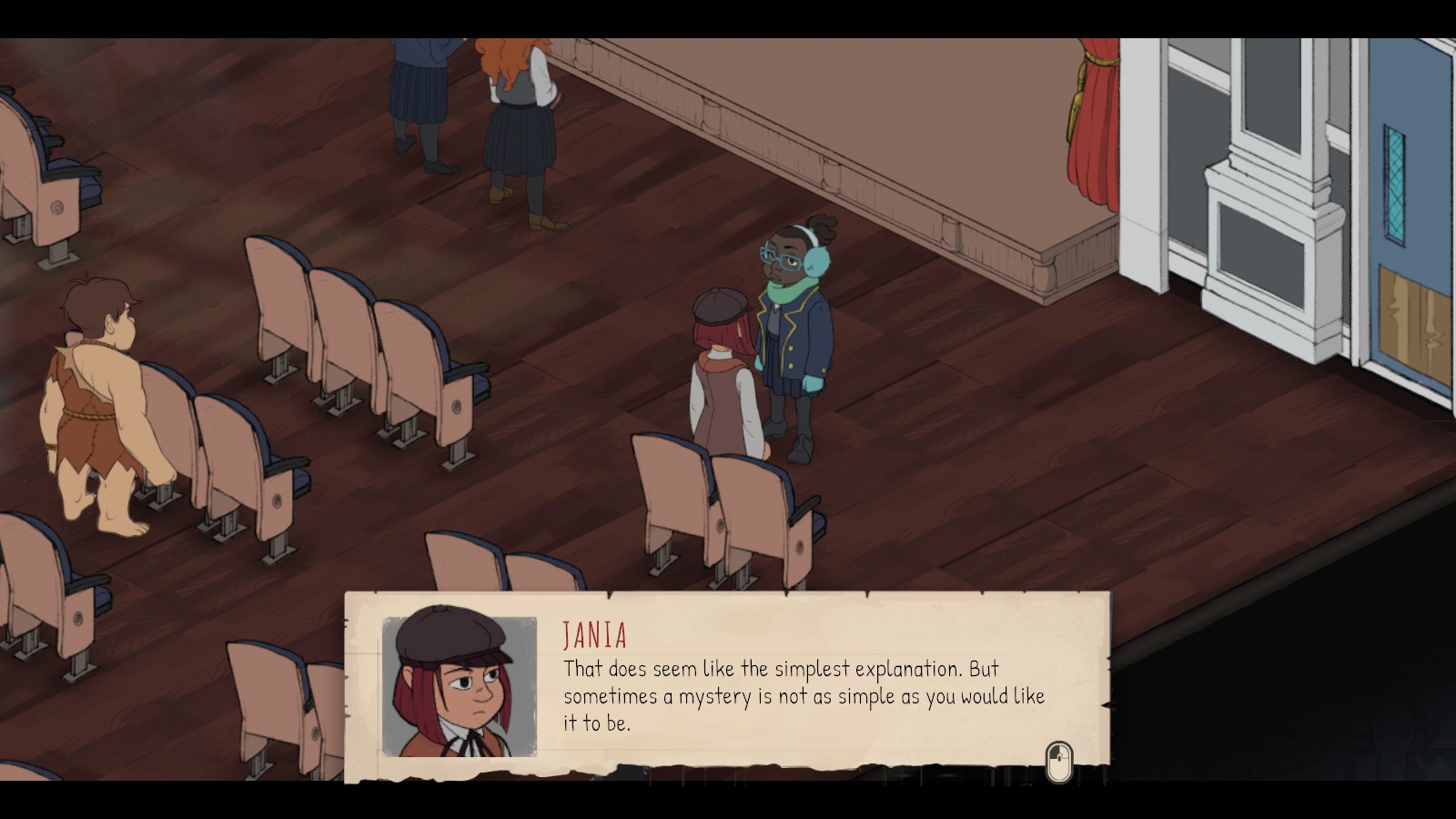 Other than characters, the environment are wonderfully done and feels like a school that you most likely won’t be mad at having to live at. I particularly loved how the environment all the battles takes place on was designed. I love how it looks like it was drawn on paper by Collin or Alicia and how it easily tells you which tile can’t be stepped on. Not to mention how you and the enemy looks like they’re actually miniatures both with how they look and how they move. 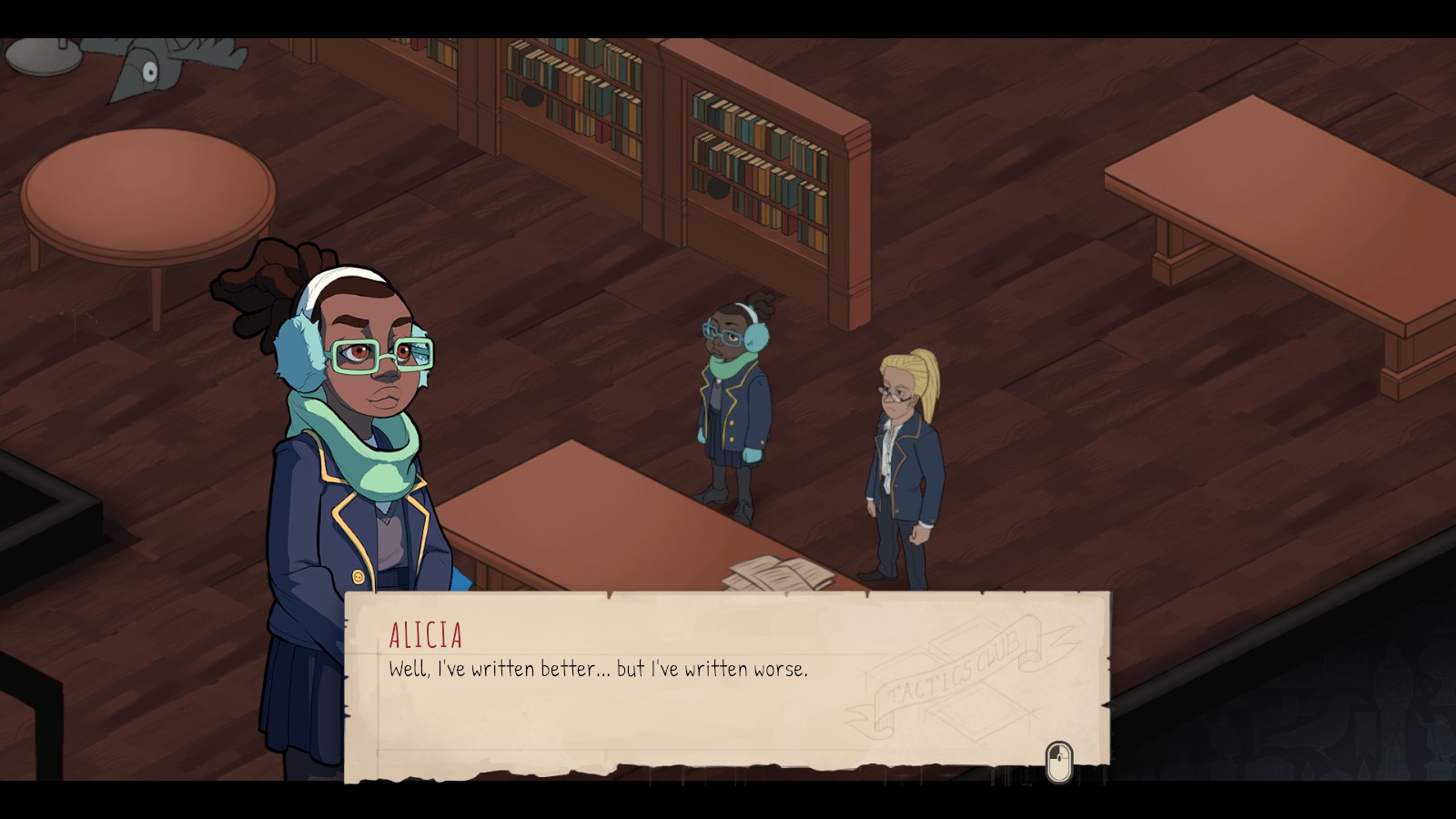 Wintermoor Tactics Club is a delightful tactical RPG that kept me hooked from the very beginning. While it is admittedly easy for the most part, it does have an interesting story, interesting characters, and has depth for the combat that’s there (both with easy customization and secret qualities that pairs well with other characters. This game will make for a great first step into turn-based tactical games for beginners as well as just an overall relaxed experience for those that aren’t looking for challenge.