Arboria is looking like it could be a very interesting third-person hack-and-slash ARPG, but so far it’s just a demo.

The game begins with a Yotun — a sort of warrior troll, from what I can gather — called Gobbok, being woken by a “Rata” — basically an ugly fairy — in the ruins of the troll village. The Rata introduces you to some basic controls as she guides Gobbok through the village. Along the way she shows Gobbok that Father Tree is sick and shows him how to heal Father Tree’s roots. Eventually Gobbok finds a strange hat on the corpse of another troll. He puts the hat on his head and goes a bit nutty, attacking the Rata and leaping down a weird sort of hole / portal into the ground, which apparently leads to the “Godz”.

The Rata then flies back to the Troll Shaman, who says Father Tree will spawn as many Yotun as needed to track down Gobbok and destroy the cursed hat. Cue your typical Rogue-like random character spawning, though with a decidedly strange flavour. 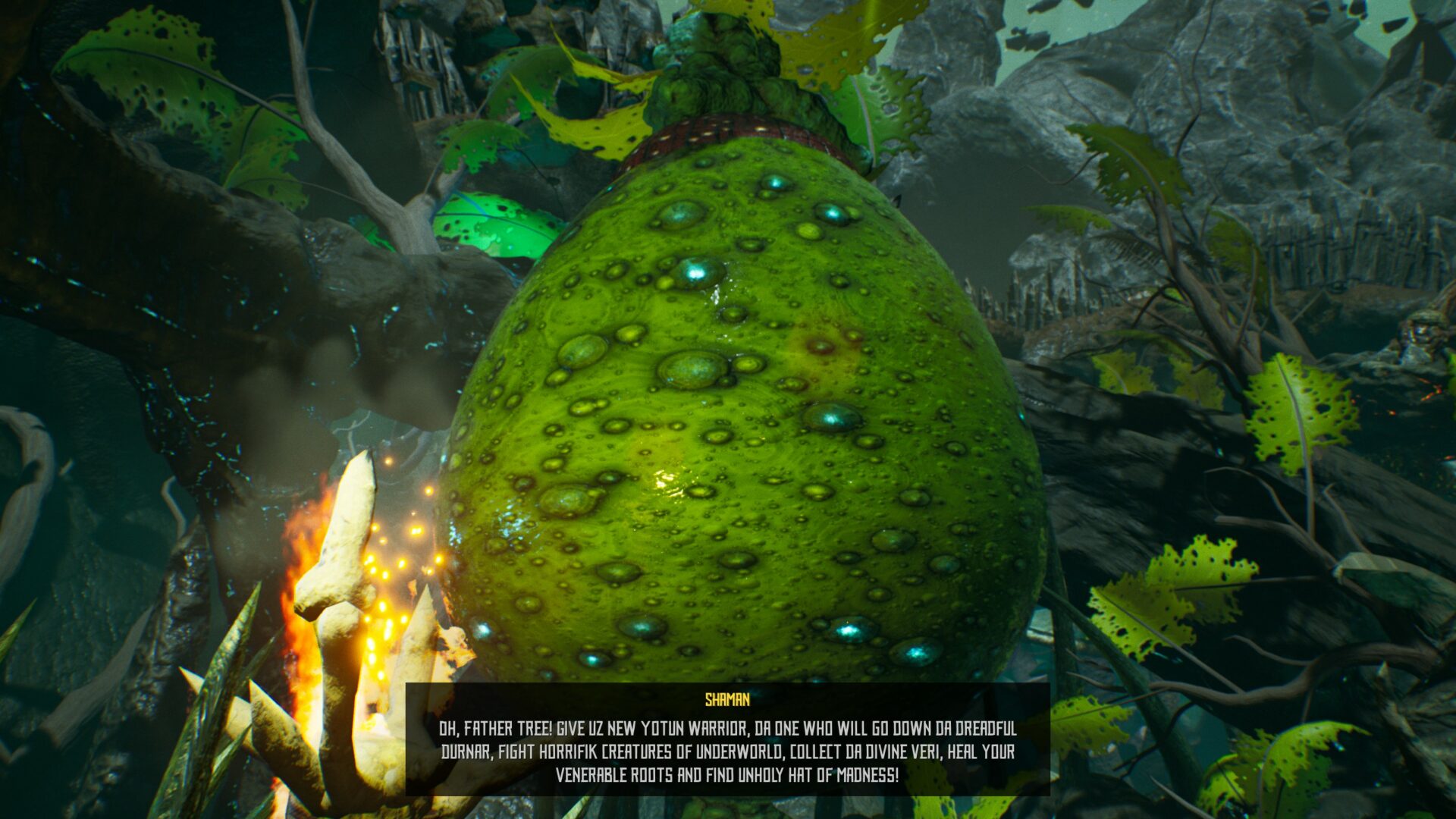 The world is, simply, weird.

I don’t know what the developers have planned for its history, but from what I can gather, the Trollz inhabit a sort of dark fantasy world that is built on top of a technological one. The Godz seem to be technological in nature, whereas the Trollz and the enemies that inhabit the dungeons all seem to be organic. Weapons are “symbionts” and seem to fuse themselves with the wielder’s body: an axe, sword, or scythe blade becoming a natural extension of the Troll’s arm. Armour seems to be similarly infused with life, though it’s made of Troll hide or bone, and carries the memories of those whose bodies went to make it. 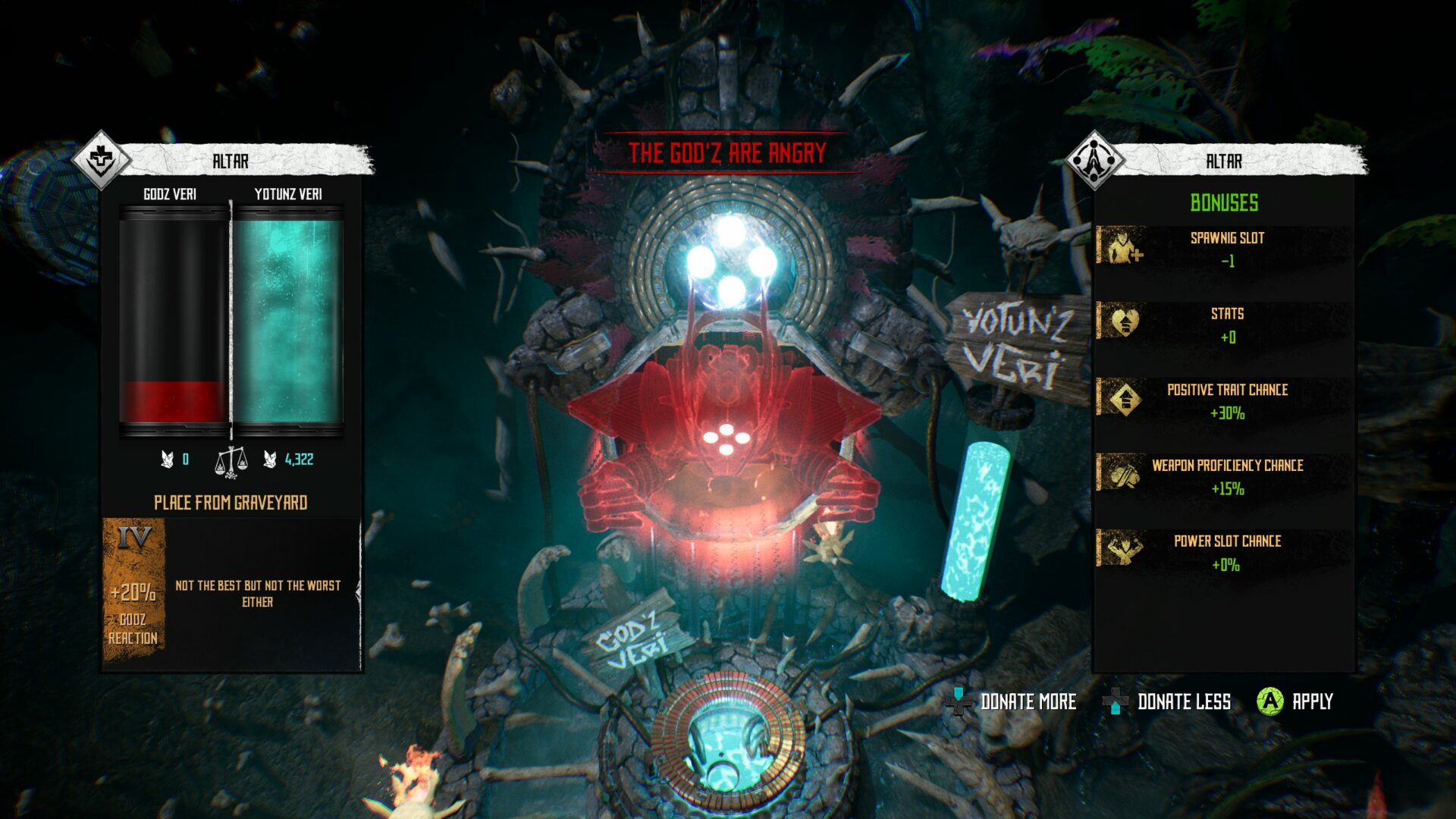 Cut scenes show the Rata or Troll Shaman doing crazy stuff, the whole tribe dancing as a newly spawned Yotun is propelled downward into the dungeon abyss, and the Rata spewing glowing torrents of veri — a sort of crystalline life force that she eats as you find it — into a weirdly sort of techno-organic machine, which somehow pumps it back up to the Trollz village at the end of each level. It’s a mix of a sort of organic fantasy, technology, and even horror, unlike anything I’ve seen before, though it reminds me a little of China Mieville’s “weird fantasy” worlds.

It’s all rather grim, but most definitely fascinating.

Graphics are used to wondrous effect to enhance the atmosphere of the world. Weapons really do look like they’re part of your Yotun’s body, discarded armour runs off screen and disappears when you swap it for something better, and the teleport effect is rather gruesome, indeed: the Troll rapidly collapses into a puddle of fleshy goo, moves to the designated position, then reforms again. It’s really impressive to behold! 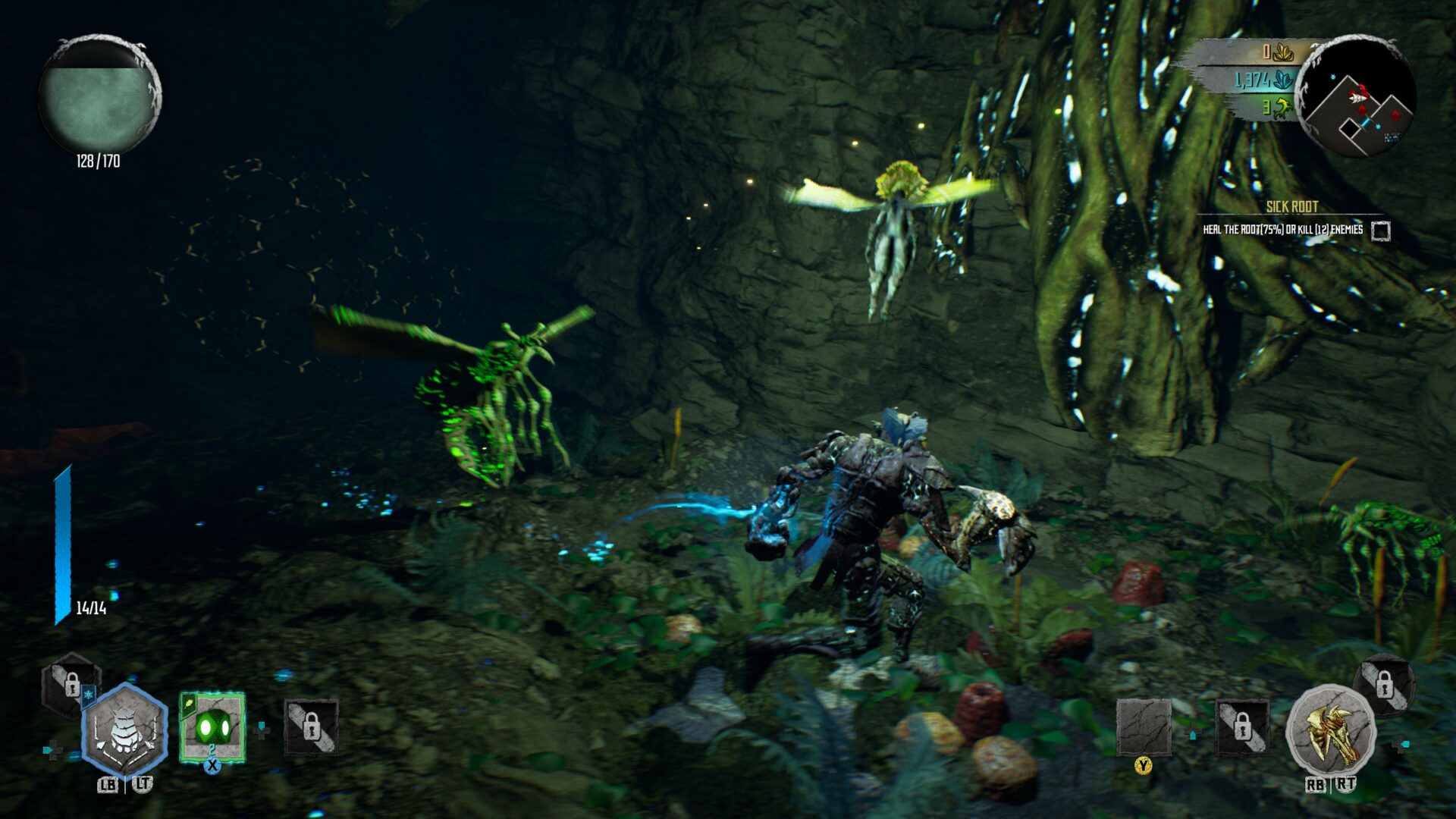 Sound and music are reasonably nice, but fairly limited in variation during play — and no effects at all during cut scenes — with a few different music tracks. These fit the atmosphere perfectly. Dialogue is all written text. I think this is probably better than overacted spoken word, but some Trollish grunts or mumbles might have been good as voiceovers.

Arboria plays like many other third-person action-adventure games, with a similar sort of interface and basic gameplay to many console games, from Deathtrap Dungeon to Bayonetta. There’s full controller support, which I used extensively, but mouse and keyboard are supported as well.

The controller setup is the usual sort of thing, with left stick controlling movement, right stick giving you free control of the third-person camera, and buttons (in this case the trigger buttons) controlling attacks. You can run, dodge, and roll as well, but there’s no jumping. Yotuns are large and quite slow, so you’ll need to familiarise yourself with the speed of animations, different weapon attacks, and enemy attacks as well, if you want to excel at the game.

It features Rogue-like elements, primarily permadeath and procedural generation of levels, enemy spawns, and loot, though the loot variations are limited enough to make this a bit pointless at the moment. 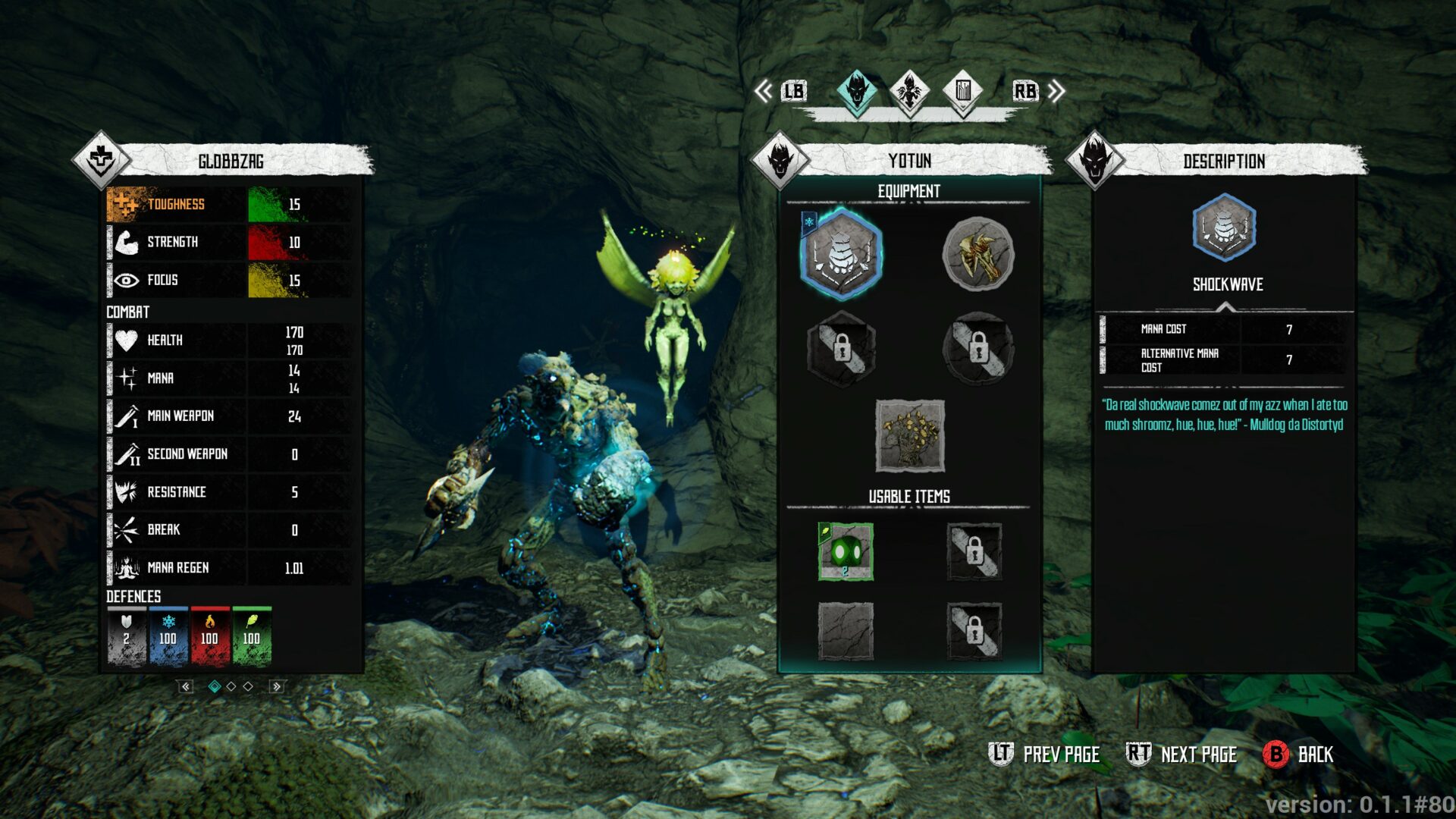 Progress is measured in three ways: collecting veri, for unlocking meta-progression improvements and giving bonuses to future Yotuns by donating it to the Godz; healing Father Tree’s roots, which provides an immediate full heal for your current Yotun, but more importantly unlocks further improvements back in the Trollz village; and reaching the electric door to the next level down, which lets you pass through a little anteroom where you can transfer veri back home and improve one of your Yotun’s attributes by five points, as well as watch a little hologram of Gobbok’s recent progress. The Trollz village has a number of different paths and areas that appear to be currently unavailable, most with Trollz standing about working on them. I’m assuming these will provide further avenues for progress and will be revealed in future game updates.

This means that combat itself is actually pointless, which is a questionable design decision for this type of game. Killing a creature grants no measurable improvement, no experience points, no loot, no veri, … there’s absolutely no point in engaging in combat if you don’t have to. 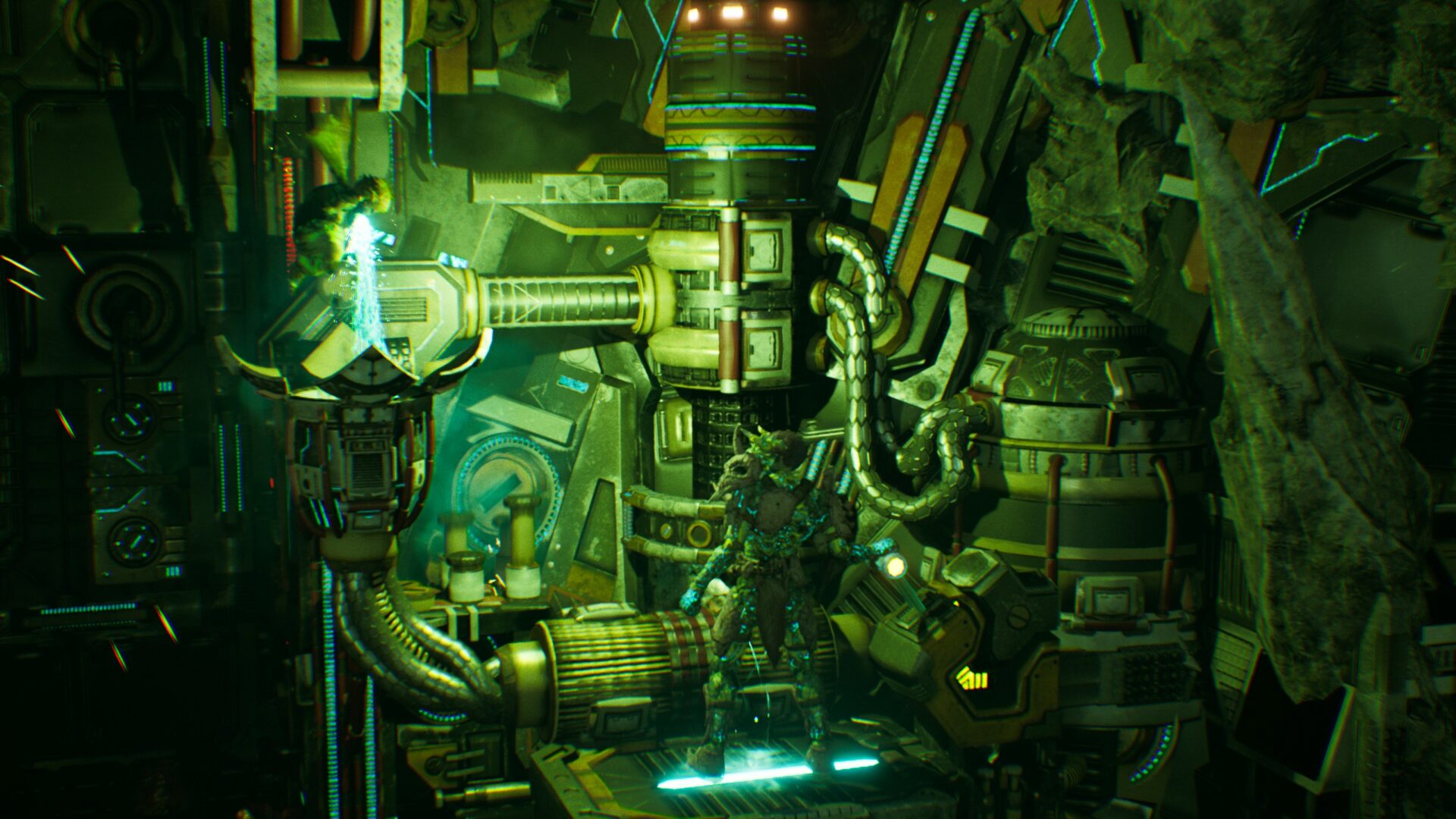 Arboria is very limited at the moment. Though the core is there and it’s easy to see how it could be expanded to produce great variation in symbionts, runes, upgrades, characters, and the like, at the moment there’s very little available, and the game consists of only a few short levels.

From my few hours with the game, completing all the currently available content, I believe there’s a single healing rune, which you’re given at the start; three ‘spells’: teleport (overpowered), shield (broken), and shockwave; two types of light, medium, and heavy armour, which are just incremental improvements; and a few weapon types, sometimes with unexplained modifiers — what does “break” do, for example? There are many things not yet explained, in fact; more than I’d like in a game that’s this weird.

Each of the three procedurally generated “dungeon” levels (after the intro) plays basically the same as the others, with the enemy roster comprising three types of flying insect and three (I think) types of ground-based creature, with a single boss at the end. Once you pick up teleport you can defeat any enemy without getting hit if you’re careful, and a lifesteal weapon lets you heal whenever you want to anyway. Healing Father Tree’s roots is usually a simple matter of avoiding death for a minute or so while the healing occurs; the wave-based heals are only slightly more difficult.

The levels themselves quickly become very “samey” to look at, with the same enemies, models, and textures, causing my initial interest from the setting to wane. I assume the developers will have each group of three or four levels representing a different setting within the dungeon, as is common for the genre, but at the moment there’s only the one “biome”. 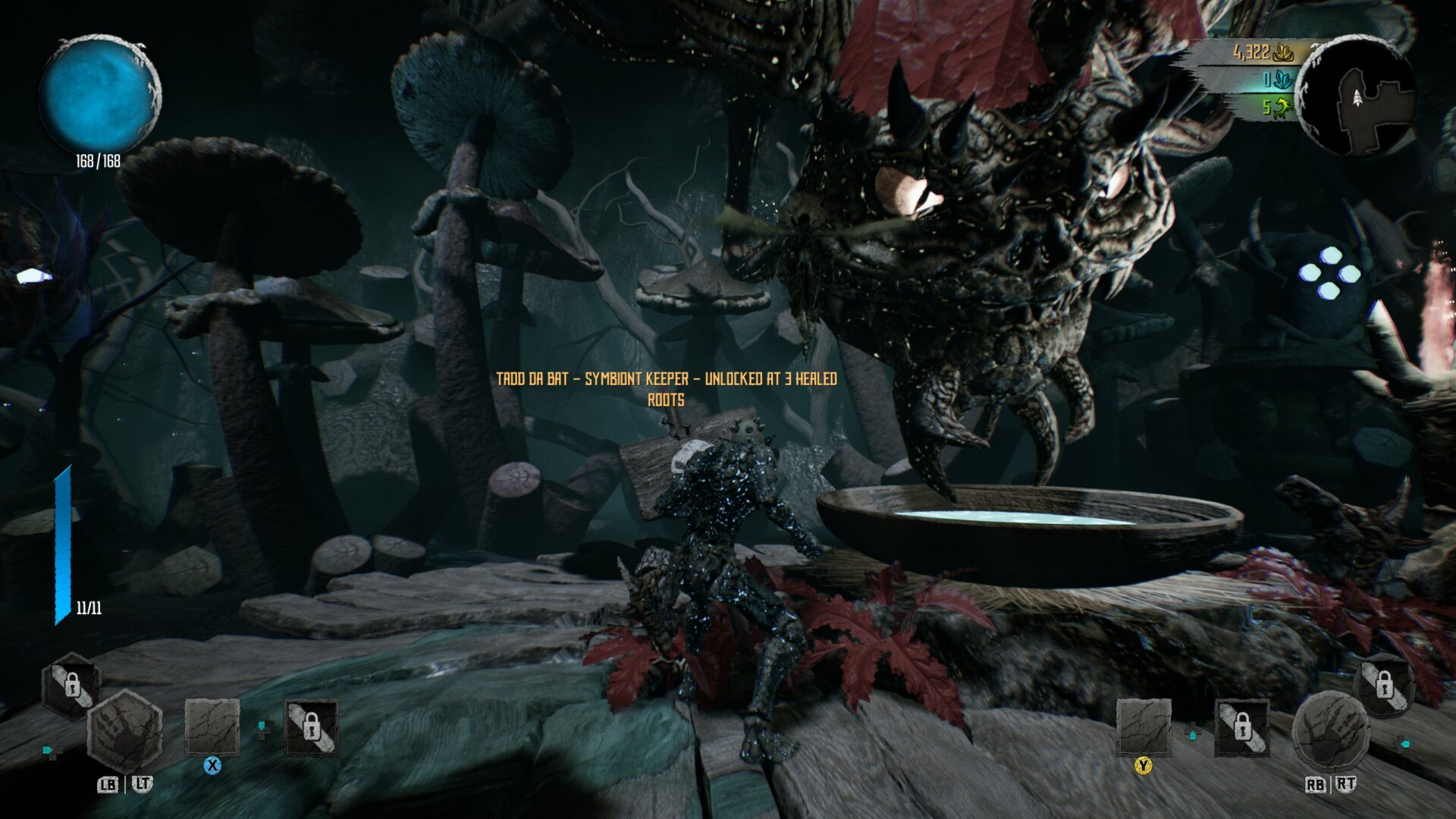 Unlockable areas in the Troll village seem to be currently limited to only symbionts and mutations, so even if I wanted to redo the existing dungeon levels a few more times, there’s not actually much to unlock as far as meta progression is concerned, anyway.

There are also a couple of severe bugs that I’ve encountered: the shield ‘spell’ seems to stop working after a while, completely locking up your spell slots until you restart the game; and the enemy lock on function drops off way too easily, making combat much more frustrating than it should be. Both of these have been reported to the developers by a number of players, but they’re still a problem in the current version.

For some reason the visuals seem to be restricted to a maximum resolution of 2560×1440, but it’s fair to say they look and perform very nicely indeed on my RX5700-based system at that resolution. I still would have liked to bump the resolution up.

Obviously the game is in very Early Access, but potential buyers need to be aware that it really is just a demo at this point. Don’t expect more than a few hours of entertainment from the current version. 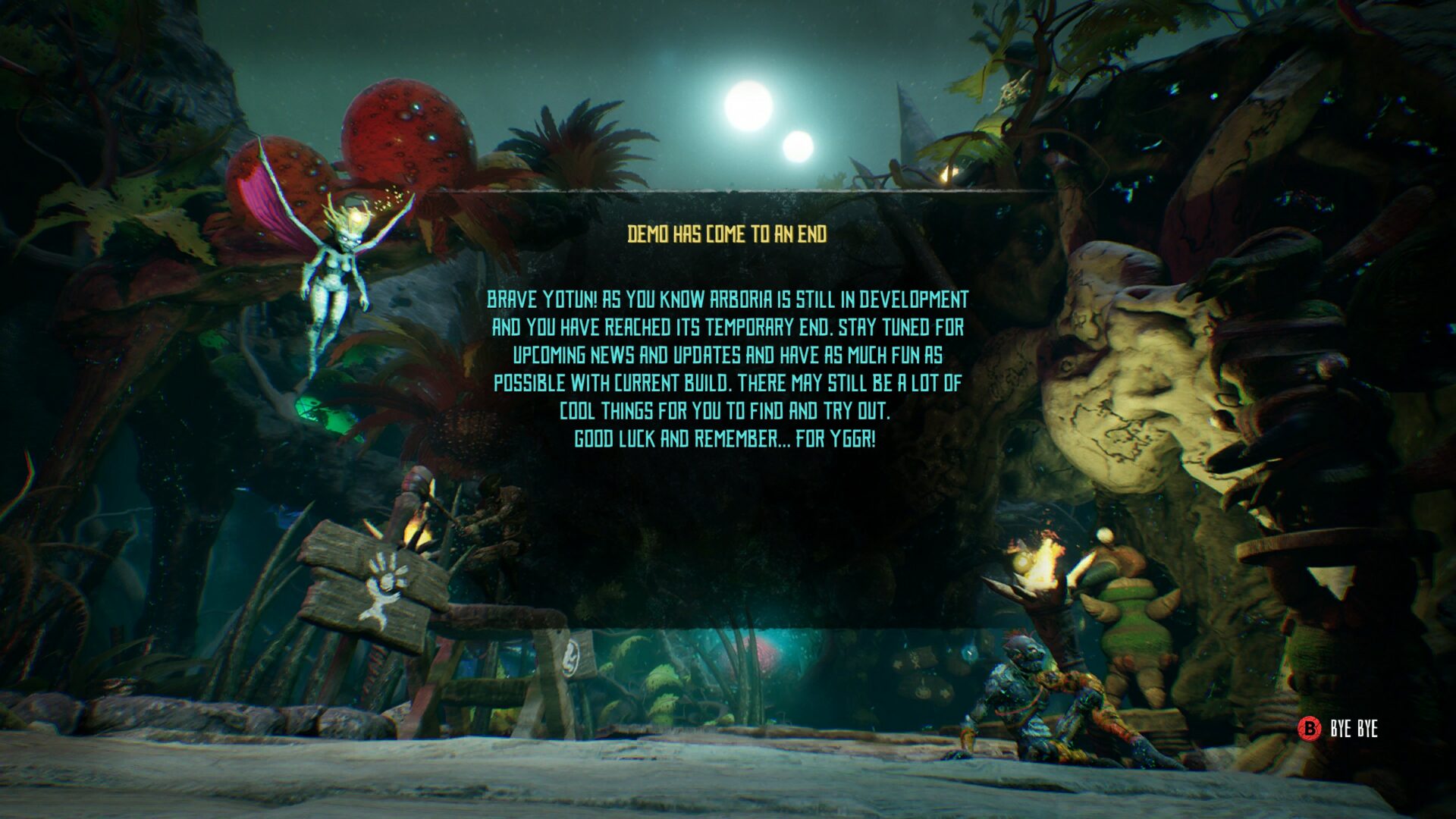 At the moment Arboria is only a short demo with a taste of an interesting backstory, a few similar-looking levels, and a handful of enemy types and enhancements, so it’s very easy to recommend holding off until it’s been developed further. The core gameplay is solid, bugs and issues notwithstanding, and the concept is unique and interesting. I’m looking forward to seeing what happens with Arboria and playing the finished game, but there’s simply not enough content to warrant a purchase yet.

If you want to support the development, then by all means pick it up now, just don’t expect more than a couple of hours of gameplay at the moment.