So far, yet only a fold away.

A Fold Apart focuses on the difficulties on a long distance relationship between two characters, which you can switch around the genders of if you want to before starting. To make things easier, I’ll call them Red and Blue. After meeting at a library, they hit it off pretty quickly as they make many memories together, start dating, and soon enough live together. However, they hit a snag one day as Blue is offered his dream job of designing an important building in the city. After talking, Blue decides to accept the contract and temporarily move to the city until the job is done while Red stays in the country and begin her dream job of being a teacher. The two communicate with each other through text messages, but it only takes a couple weeks for problems to arise. 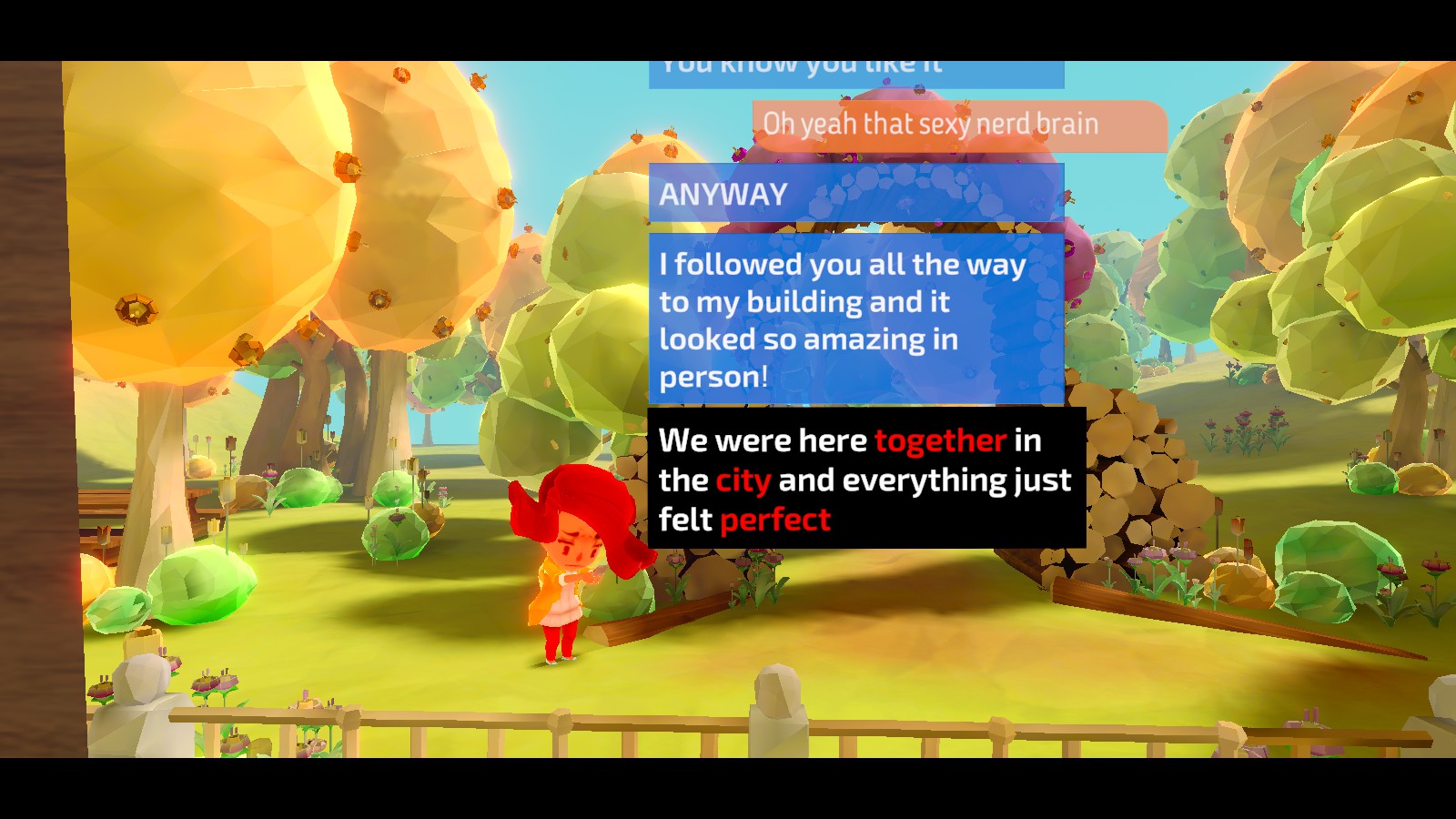 A Fold Apart gives us snippets into Red and Blue’s relationship, showing us the times when problems emerged for either of them. Each chapter starts you out with controlling either Red or Blue and right when they’re texting each other. Every so often you’ll be able to choose between two choices to send out, but it doesn’t necessarily change the story. It all seems like everything is fine until something brings them over the edge, whether it be a text or their own doubts. Thus, we’re taken into their thoughts where they’ll walk through their mindscape as their thoughts are both shown with the changing scenery and text. This is also where the puzzles reside. 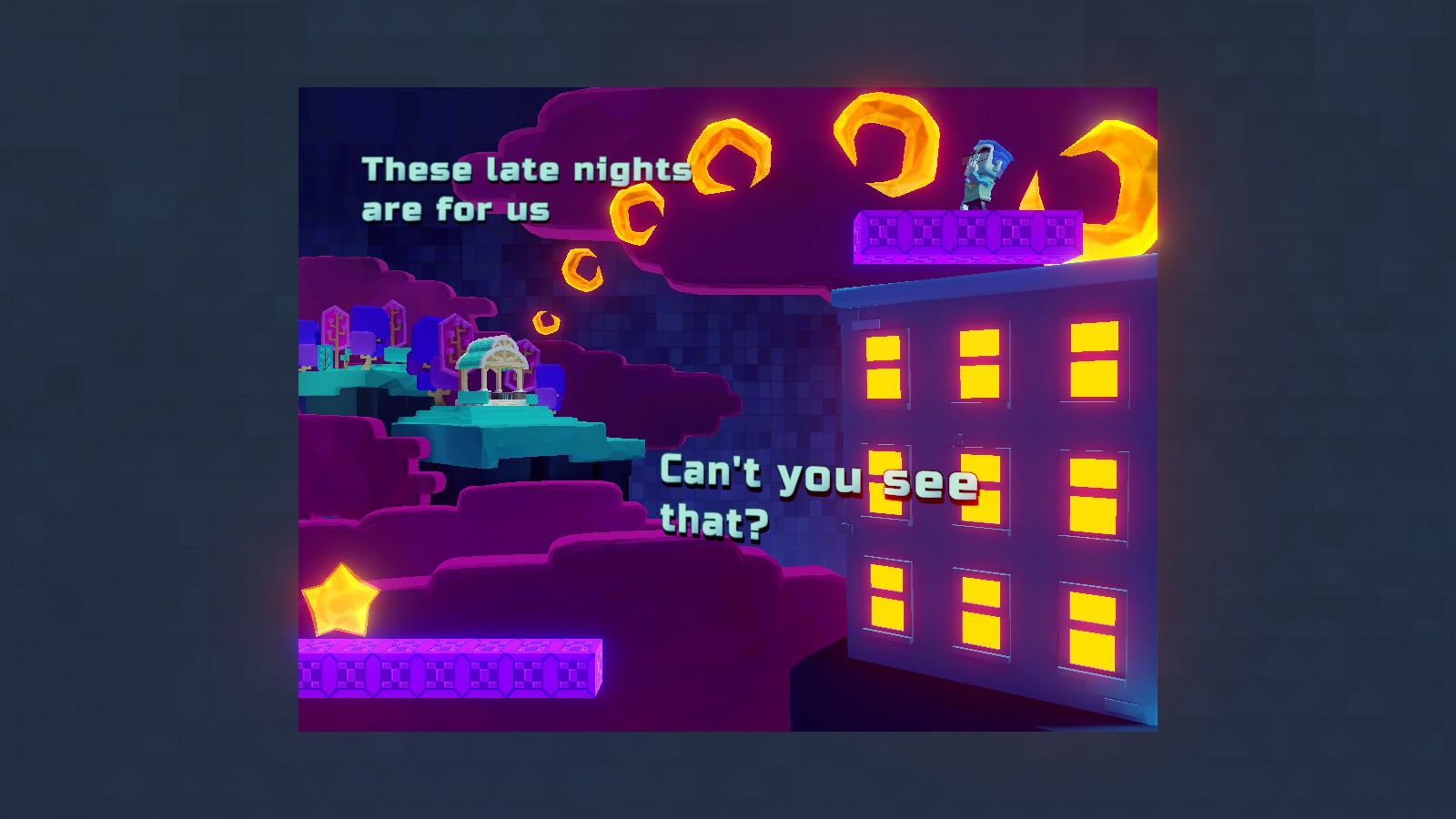 As you can probably tell, the puzzles here are focused on folding paper. Most levels require you to figure out a way to get to a star to advance. It starts out pretty simple. At first, you can only flip the paper to see what’s on the other side and fold a side or two to get you used to combining platforms together and knowing that you can overlap obstacles. The only thing you can’t do is folding the paper over Red or Blue. As time goes on, more elements are added in and become a bit more complicated. Soon, you’re able to fold all sides, fold the corners, flip the paper, and have to deal with platforms that disappear if folded. Of course, these aren’t introduced at the same time, but by the end, you have to solve puzzles with most of these in mind. 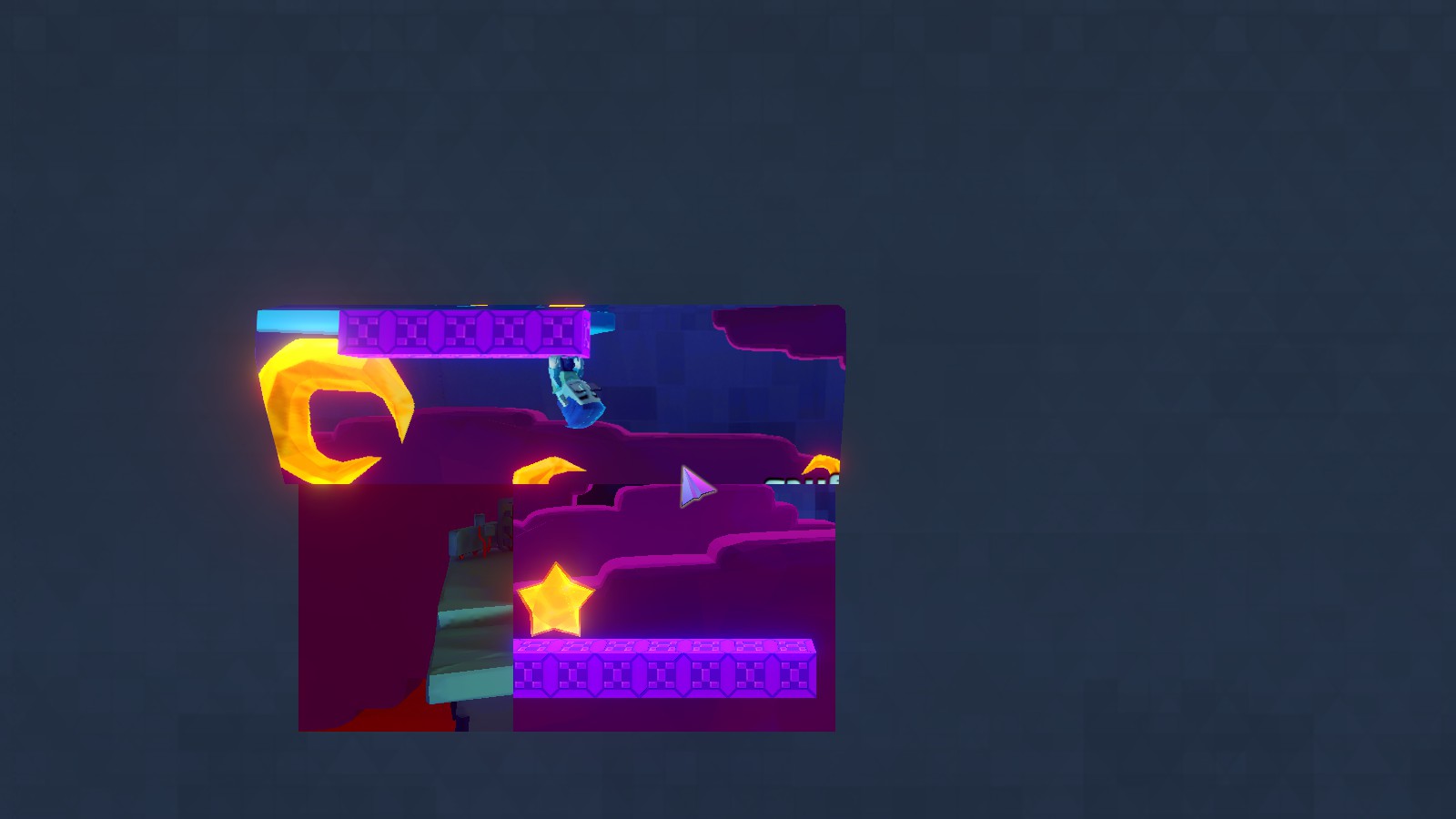 If you do come across any trouble, there is a hint system that you can access through the pause menu, but the hints are more doing a step for you rather than giving you a nudge in the right direction with an actual hint. It also resets the puzzle to the beginning. So it’s good news if you’re just completely lost on what to do, but not so much if you just need the last push and would rather not be giving the solution outright.

I did have some troubles with A Fold Apart though. Sometimes, I had trouble climbing onto platforms despite being right beside it. Making me try multiple times before it registered me being right beside a platform ledge (and in some cases had to use the hint system). On puzzles that let you fold the sides and the corners, I also had some problems of the game thinking I wanted to fold the side rather than the edge. 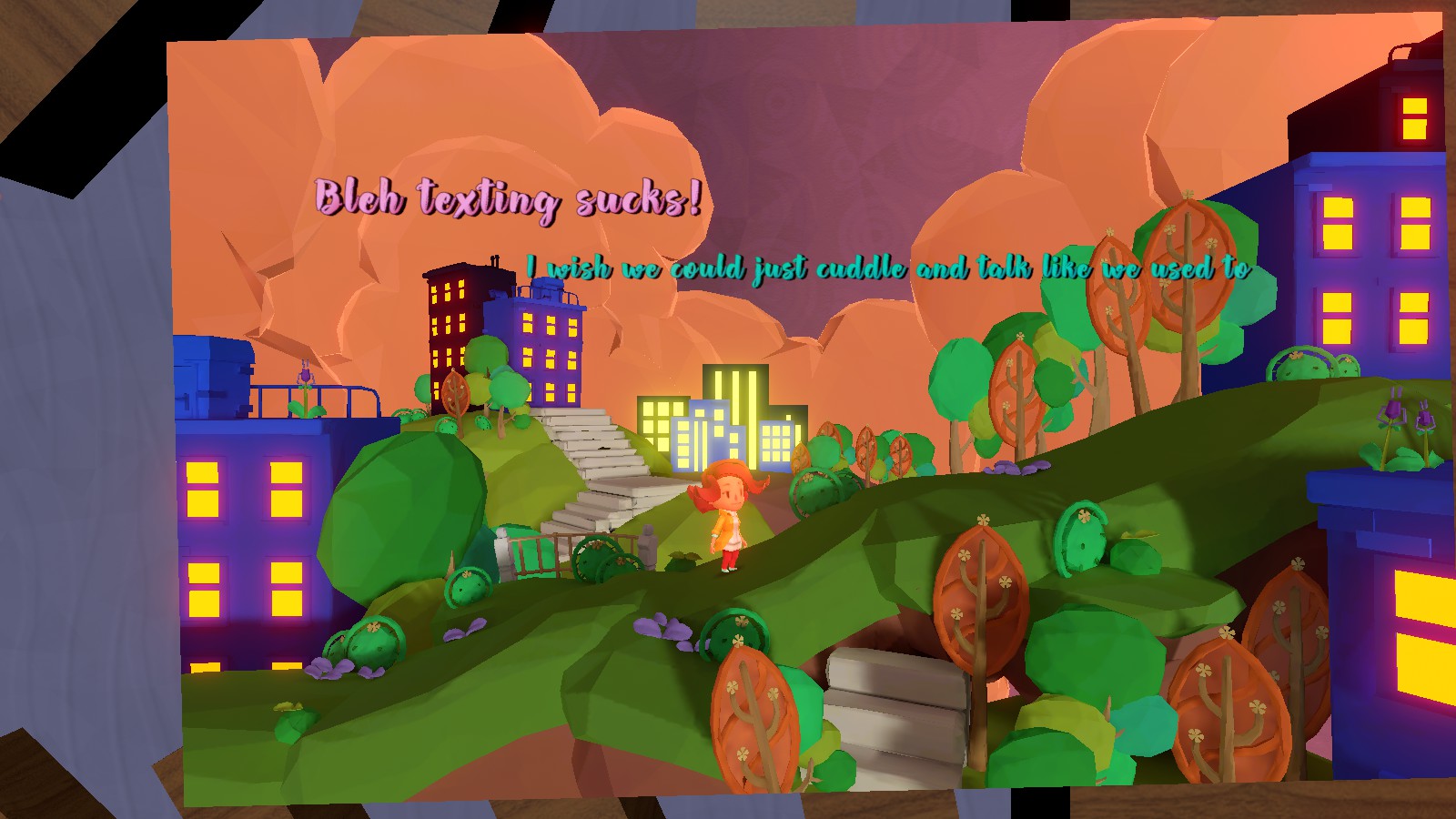 Also, it may just be me being inexperienced in the dating scene, but I found the conflict a bit silly at times (which evolved into annoyance). You’re told pretty early on that they prefer talking face-to-face rather than over text, but we never see them doing the next best thing by talking on the phone or video chatting. Another was that they read way too much into some of the texts. Like at one point Red says that Blue should take care of himself so he doesn’t get sick. Blue gets upset and goes on about how long work nights are for her before realizing that Red means well. It also doesn’t help that they don’t really communicate. Like Blue wants to rest up during his visit instead of during a bunch of things Red has planned, but he keeps it to himself rather than telling Red since he thinks it would cause a fight. I’m sure Red would have understood especially after telling her that he’s been working long hours and he’d be incredibly stressed once he gets back.

I don’t know, maybe I just didn’t resonate with the story as well as others have and expected them to work more on their communication and other problems that popped up rather than ignoring it and blaming it on the distance (or on Blue for taking the job). I do see how it’s realistic, especially since I’ve had times where I get anxious when texting or just sit on a message for hours combing through it despite knowing it should just take a couple of minutes, but I guess I expected them to actively improve their communication and try visiting more (especially on Red’s end) rather than (spoiler) defaulting to Red having Blue choose between his job or the relationship. 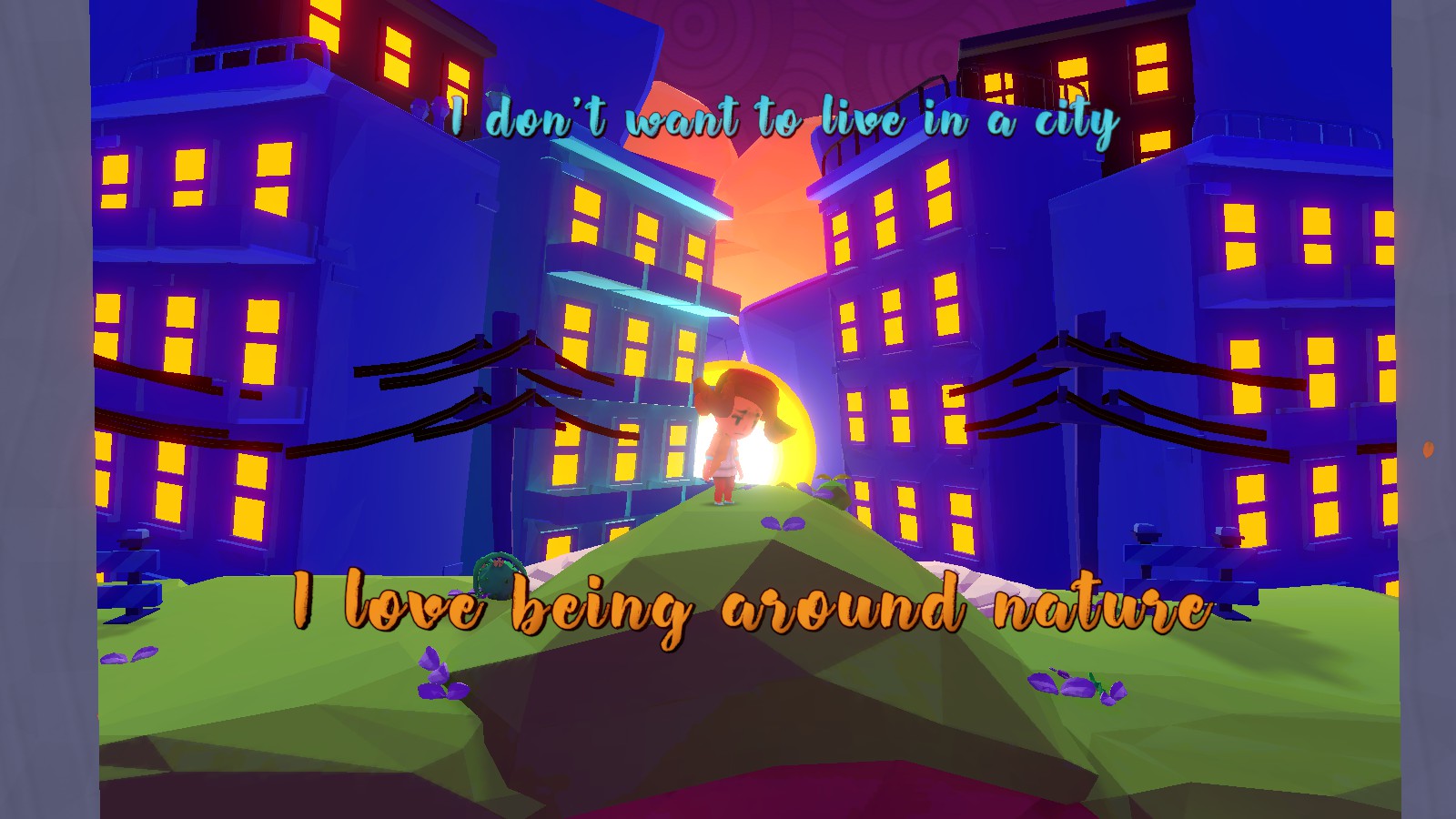 That said, I do love the aesthetic and how it stuck to it. I love the art style and how bright and colorful everything is even when it darkens up during the low points. It’s great how the environment when we’re going through the character’s thoughts change as well. Like when Red mentions that she hates the city, all the buildings start to swarm her to express how it makes her feel cramped. Lastly, I like how it stuck with having this take place on paper rather than just having it only during puzzles. Each piece of paper is one area snippet and the next area is placed down so you can walk on it. Though, my favorite area was definitely when it acted as a train. 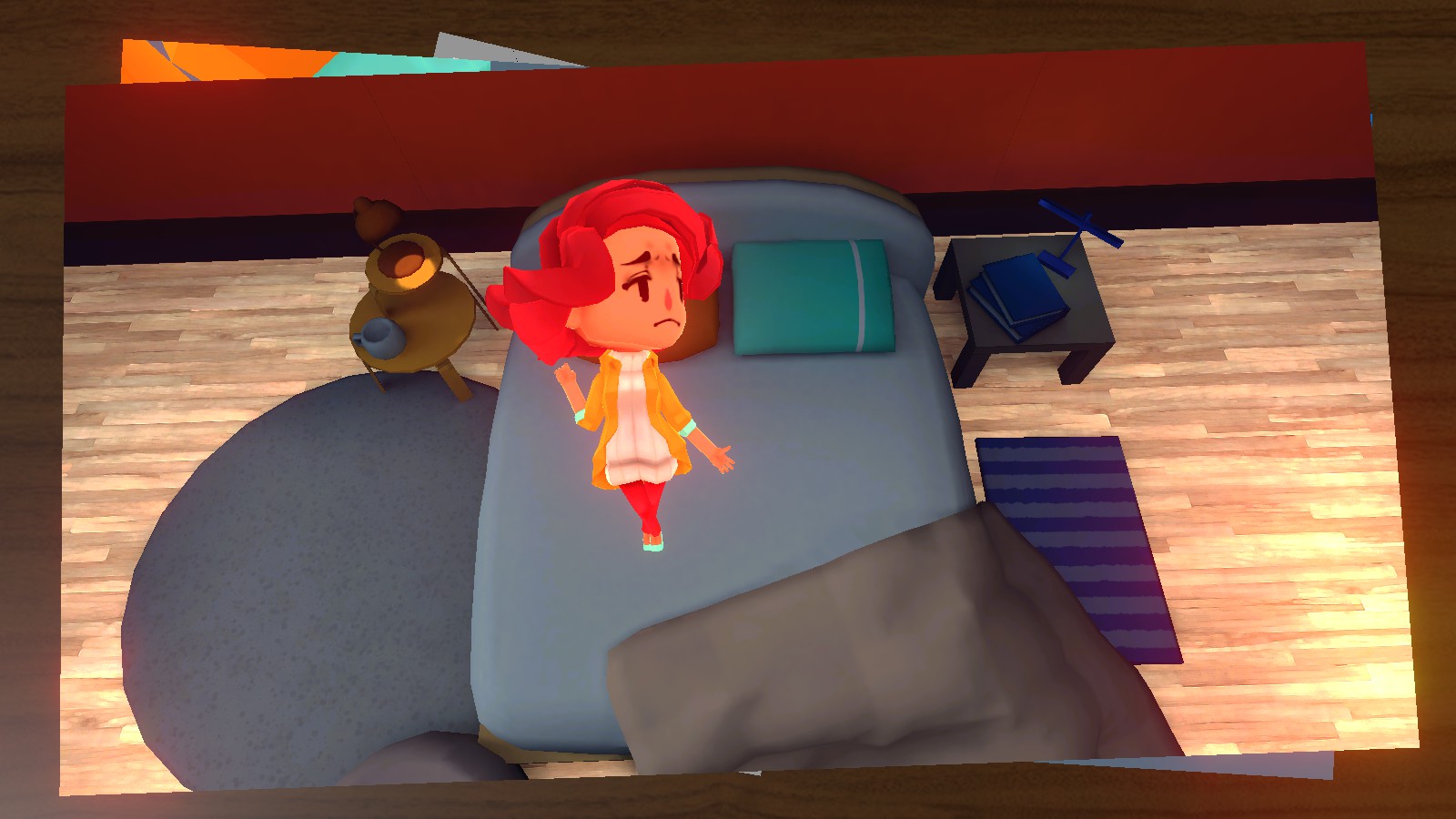 While I did enjoy A Fold Apart for the most part, I’m not sure if it’d necessarily recommend it. While I do love the art style, how paper is used throughout, and how the mindscape was used to link towards Blue’s or Red’s thoughts, there are some aspects that can turn you away. If you’re looking to get the most bang out of your buck, A Fold Apart won’t help in that regard. It’s only about 2-3 hours and there’s not that much replayability. It also depends on whether or not you want to play through a story about a long-distance relationship that’s pretty lacking in the communication section and where both sides often look too much into things. I also won’t recommend A Fold Apart if you’d get annoyed at the constant reinforcement of long-distance relationships being hard and how often the inner dialogue kinda repeats the same message. Otherwise, look out for a discount or consider picking it up on iOS.