The creators of Break Arts are presenting their next game and this time in VR. Soundart is a rather simplistic VR Music game that comes with 3 visual themes and close to 40 different songs, including the ability to use your very own favorites as well.

The Performance
From a technical point, there were no issues. The game runs smooth and the controls were responsive. No complaints on that side.
Though there seems to be a weird bug that completely tanks the performance and makes the VR screen flicker like crazy. The solution I’ve found so far was just trying to close the Steam VR headset popup while in the game and canceling it. 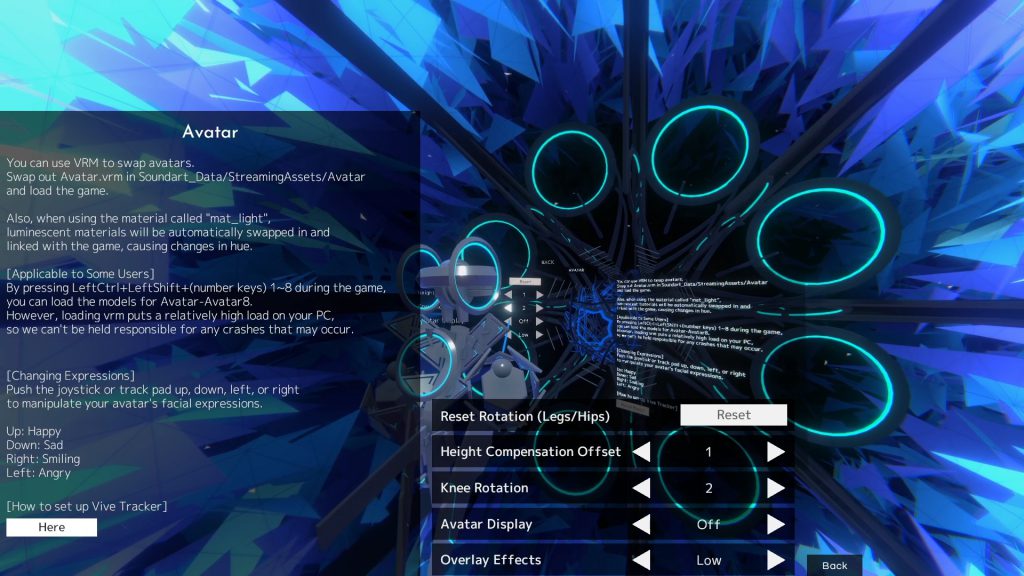 It comes with a single robot avatar but if you’re looking for something fancier you can look or create your own using external means as it supports the .VRM data format. Up to 8 can be prepared but there’s a warning in the game that trying to change the Avatars while it’s running will lead to high load on your PC and possibly leading to a crash.
Overall a neat feature and something to consider if you’re playing with an audience.
Another thing worth mentioning is the fact that there’s some stream chat integration adding extra notes with special commands.

Custom Music
Unlike Avatars, it’s very easy to utilize your collection of music since it offers an in-game browser for that. Just locate and pick your tracks and you’re good to go. The supported sound formats are: OGG, WAV; AIFF, MP3.


Soundart is kind of made with streaming in mind as it offers two different views at the same time. The player within the VR Headset is locked to the First Person View while on the normal monitor screen you’ll see a more dynamic view with frequent changes in camera angles to make things more appealing for the viewer.
There’s also the option to manipulate the camera but you’ll require an assistant to do that since you’ll be busy playing the game. 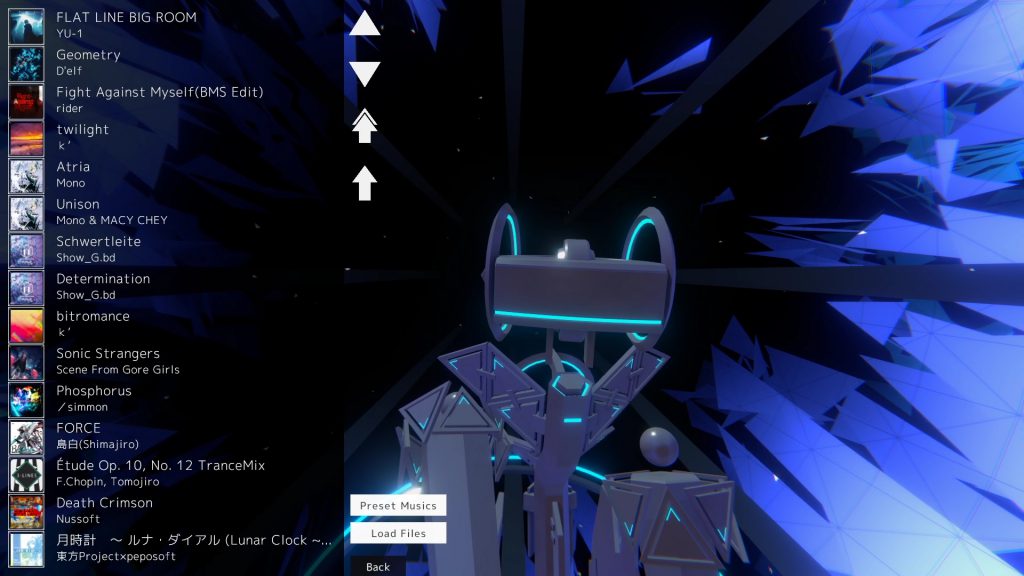 Not only can you use your very own favorite music for the play, but there are also close to 40 tracks that come with Soundart. There’s a nice variety of songs, some have vocals and there’s most likely also a few cameos from other indie games as I’ve noticed that Fight Crab is present with a song too! 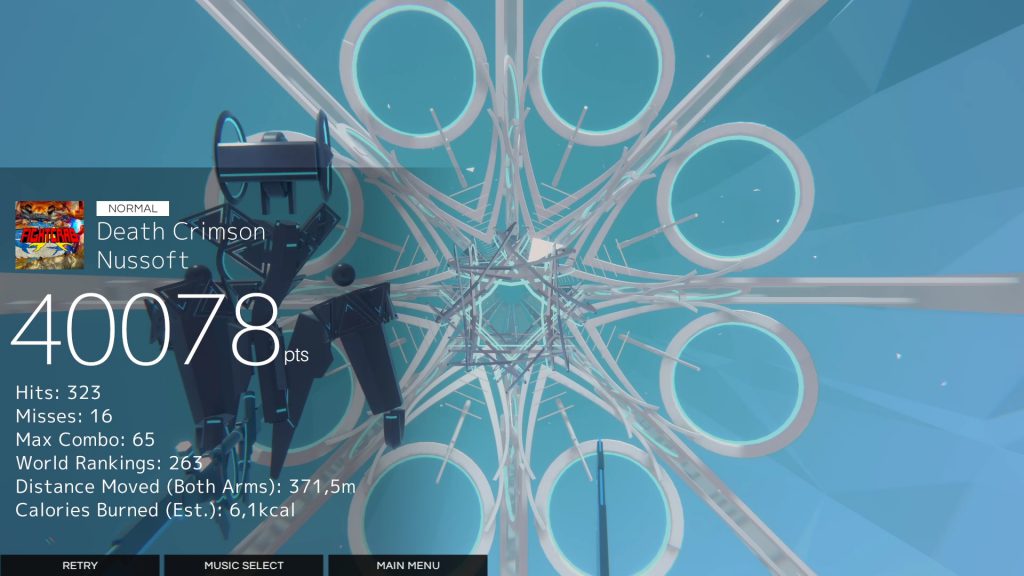 There’s a leaderboard for every single music. I have no idea how it works or if they are split into different difficulties as I wasn’t able to find any indications of that, especially when it comes to custom music. Yes, you read correctly the custom music also has a ranking.

The controls are very easy and are limited to motion controllers to move around the petals, we’ll get to that soon. There’s no need to move around which means you can play it in limited space. The buttons are only required for maneuvering the menus. 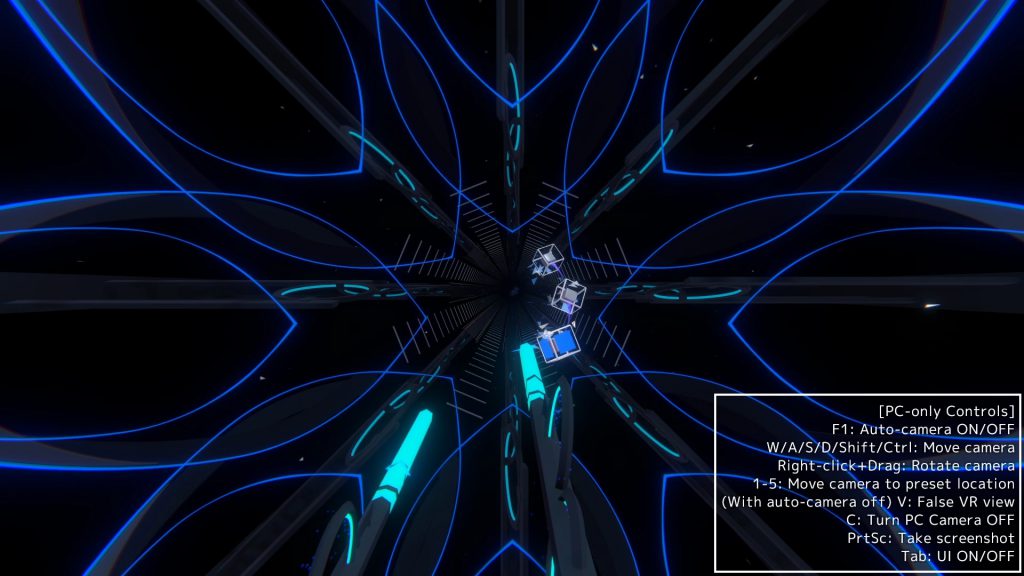 First things first, there’s a short Tutorial option that introduces you to the gameplay of Soundart. Which consists of cubes flying into the direction of one of your 8 drum petals. The petals are very moderate when it comes to activation so you don’t have to drum it like you mean it and are just more about your stick coming into contact.
Considering that the cubes are flying at you, it might turn out challenging for some to find the timing but fortunately, there’s another extra help for that. The insides of the cubes are filling up which makes it much easier to discern the timing. Once they are about to be full you can touch the petal.

Your Tools and Handicaps 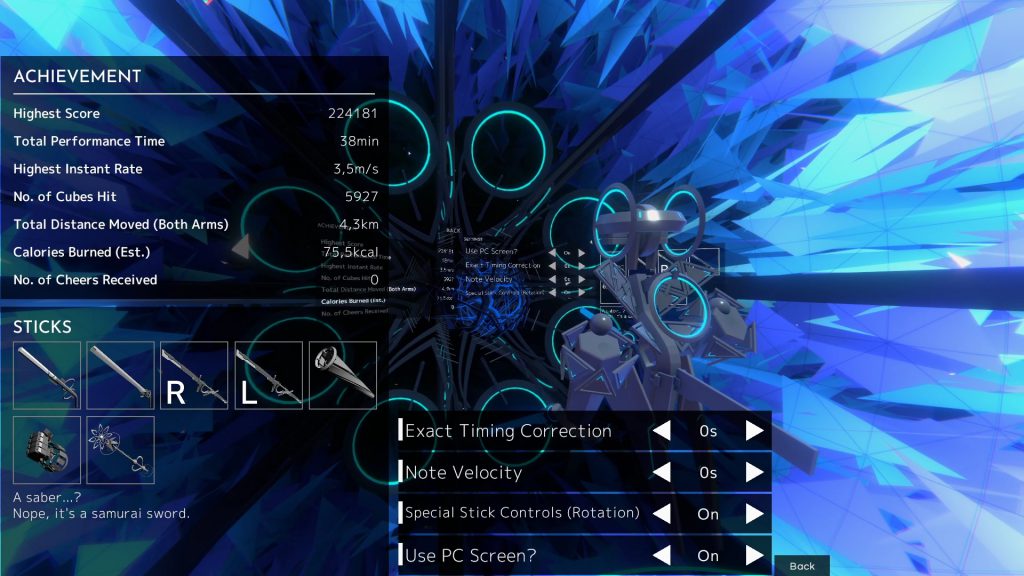 The game features 6 tools that you can use for putting the petals to notice. Most of them come in pairs, are just visually different, and bear no consequences on gameplay such as Sticks, Katana, Torch (which comes with extra visual effects), and Magic Wands.
There are two exceptions: Gloves and Single Handed Sword.
The Gloves have a shorter range and you most likely have to be a little bit more active when it comes to touching the different petals while it gives you a 1.1 multiplier.
The Single Handed Sword comes in two versions: Left or Right. That’s right, you’ll only be using one hand if you’re deciding for this handicap and it’ll give you a multiplier of 1.2.

Playing while seated?
Considering that you’re only using your arms for this game, it’s certainly possible to play it while seated. But if you’re looking to add some visual flavor to your performance then you can add some stepping to it as it tracks your movement a little bit.
There’s also a height calibration at the start of each music to make sure everything is in order. 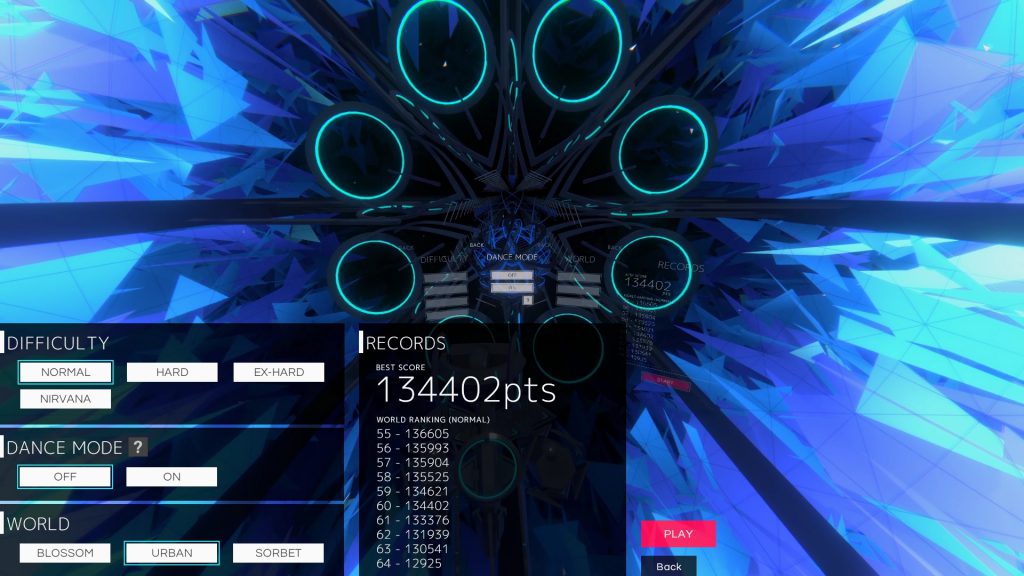 The most notable one is the difficulty selection as it comes with 4 choices: Normal, Hard, Ex-Hard, and Nirvana. Truth be told, anything past Normal is extremely frantic and certainly something more of a choice for hardcore players.

Then there’s the Dance Mode which adds a little intermission within the gameplay for you to let out some creativity that also comes with a special effect plate that reactions upon hitting it. While it has no bearing on the score, you can use it for some extra entertainment in case you’re streaming or capturing it as a video.

Last but not least, there are 3 different backgrounds to choose from Blossom, Urban, and Sorbet. The names are pretty much self-explanatory. Urban looks a little bit more mechanical while Sorbet comes with soft colors.

Single Cubes
The most common one and comes in quick succession most of the time. Very easy to hit as it only requires a touch.

Dual Cubes
Two cubes at the opposite spectrum are coming at you at the same time. They are visually signaled by a line between them. You either hit both sides using both arms or make a fast swing to catch both of them. The latter is the only possibility if you’re going for the single-handed swords.

Swing Cubes
These are chained cubes with each of them moving one spot away from the other. Technically, you can hit them with fast hits but it’s easier just to do a quick swing and get them all in one swoop. These chains come in different lengths starting from 3.
They are visually highlighted by a solid color for the very first cube in the chain.

Mash Cubes
Kind of like Swing Cubes but the difference lies that the Mash Cubes are all at the same spot which requires you to hit it fast in succession. They are highlighted by solid colors for all of them, unlike the Swing Cubes that only highlight the first one.
Using both arms to hit them could prove to be a solid tactic.

Thrust Cubes
The most visually striking ones that change the color scheme of your stage and counts as a multi-hit combo with a single strike. 8 Cubes will come at you at the same time and form an opaque plate for you to thrust through.

Gameplay Impression
The gameplay is extremely simple and I wasn’t able to spot any penalties… So you could be flailing around like a madman and it should still work as long as you hit all the cubes.
Ergo, it’s very easy to pick up and play. The only cube that managed to give me trouble was the Swing Cubes because they are rather peculiar in timing.
The normal difficulty can already present a challenge when you’re putting on some fast beats as there will be an increased amount of cubes flying at you in quick succession. The higher difficulties increase the amount by a lot so godspeed if you’re going for it.
Another thing to note is the fact that the cubes don’t feel in sync with the music because there are times where the most noticeable notes aren’t represented or represented well. This falls upon both whether it’s the pre-set music or your custom music but it’s certainly more noticeable on the latter ones.

Lastly, the shattering of the cubes does not add to the music itself due to it being a simple glass shattering sound. If you’re expecting something like Rez where there are some extra sounds integrated you’ll be disappointed. Thus, it’s another point to mention because this kind of feature helps to get you into the rhythm game.

The dance option is something interesting as it doesn’t have any gameplay value in itself and is targeted towards the audience. This reminds me of the DDR freestyle Style of play where the players do a lot more than just getting a high score and are putting on an extra performance.
Considering the gameplay and controls, Soundart is suitable for more or less smaller rooms that make it hard for full-body movement games such as Beat Saber.
Another assumption can be made that it could be very suitable for the Japanese Para Para dance style as it’s a style that focuses mostly on arm movement and small steps. There is one little catch behind that thought because it’s hindered by the fact that it utilizes tools to hit the cubes instead of giving you the ability of hand gestures.

There’s not much to say here since the graphics are pretty simple but come with vibrant visuals. Seeing the colors change and sometimes some more elaborate effects taking the stage will give you some interesting sensory experience.
There are no frequent changes in color which make it easy for the eyes. Otherwise, there isn’t much to talk about as what you see is what you get: Backgrounds, Cubes, Avatar, and Visual Effects.

Same with the sound. The provided music is interesting, to say the least, especially if you’re looking forward to something more on the Japanese side of music.

Soundart opts for a much more simplistic approach than Beat Saber VR for example and thus decreases the room required for playing. Hitting the petals is very easy and some might not even find it challenging due to the seeming lack of penalties and heavily relies on player honesty.
The cubes and the music don’t seem to match up that well either or at least I wasn’t able to get the feeling of synchrony like in other VR games.
You should probably look at it as a fun activity rather than something challenging. Customization and Streaming could offer another interesting tidbit to your time with Soundart. Can you make it into an Art? Maybe.

Overall, there’s some good fun to be had in case you want to listen to your favorite music with some extra activity. Considering the modest price of about $19,99 and the sheer unlimited choice of music, you can get a lot of mileage out of Soundart. If you’re looking for a hardcore VR Rhythm experience then this won’t likely be the game for you as it can’t match the carefully designed levels in comparison to the auto-generated ones in Soundart.
Weighing the pros and cons out, it was a difficult choice that is settled barely on a Save.