The best in the series.

Borderlands 3 is the best game in the franchise; not only it fixes all the massive design flaws all the previous games had, but also massively improves the gameplay and how the skills and progression are made, all partially thanks to the upgrade to the Unreal Engine 4 (from 3).

The game has the best gameplay of the franchise, the balance of it is near perfect and massively beats my previous “Looter-Shooter” RPG addiction (Destiny 2); however, it missed the mark on the dialogue (as all Borderlands games do, honestly) and performance, which makes it a cautious recommendation with any computer that doesn’t beat the recommended specs.

After the events of Borderlands 2, Lilith’s quest with the Crimson Raiders continues by trying to find more vaults to open (typical Vault Hunter activities), but ends up not noticing that bandits slowly uniting instead of fighting each other, and forming a massive cult across all of Pandora, the planet of the first 2 games. After a while, the Children of the Vault are born, uniting all bandits under one banner – lead by the Calypso Twins: Tyreen and Troy. 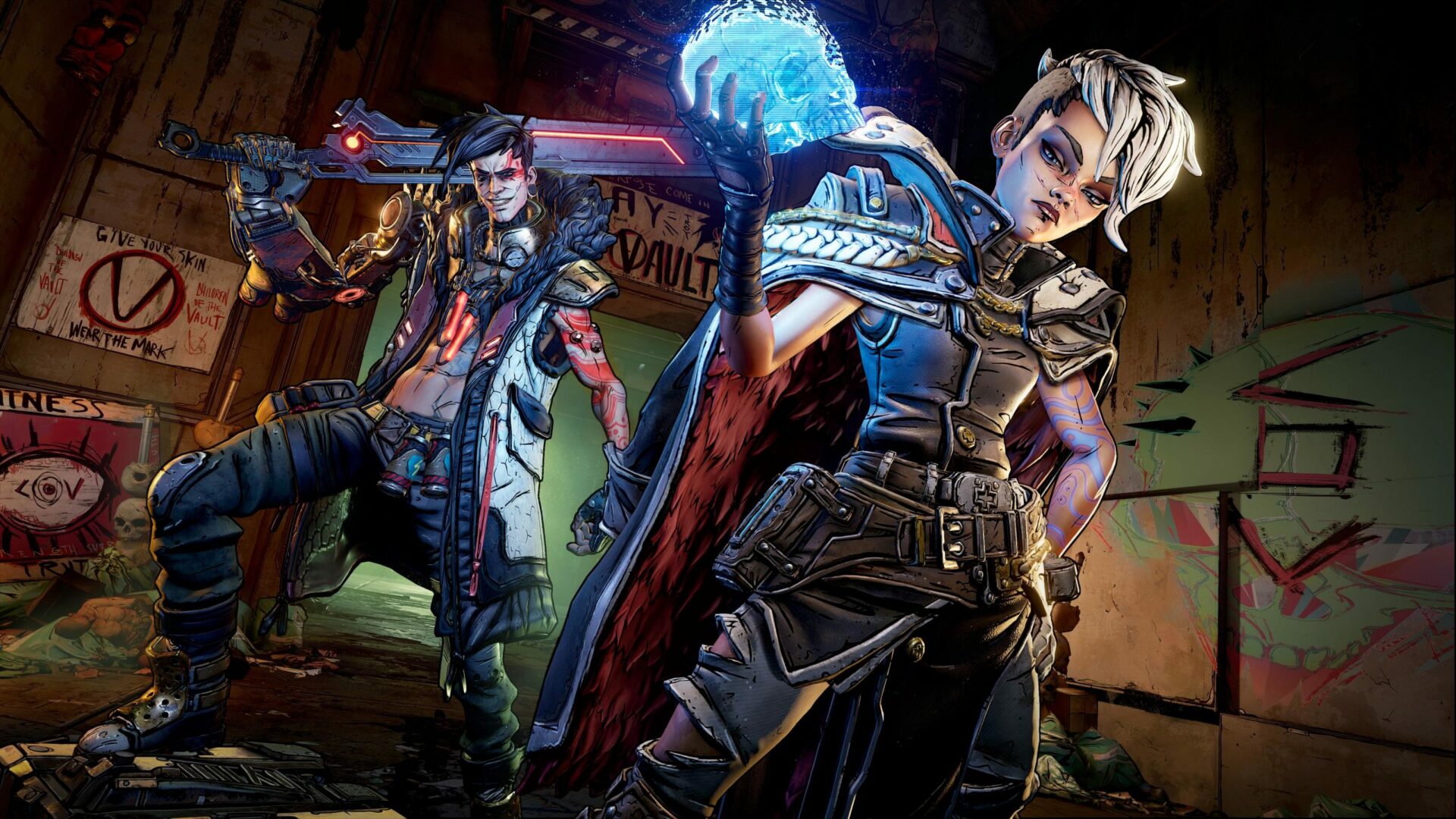 The story is actually pretty good, at least better than the previous games and has a solid pacing of jokes, character introductions (and deaths) and new planets (yes, planets! The game is much bigger is scale than any other in the franchise). The dialogue really suffers, unfortunately, and the first half of the game is borderline terrible in terms of writing and dialogue in general; the second half of the game improves it quite a lot and was quite fun to listen to in general. One exception is Tyreen’s voice actress that manages to have great delivery throughout the entire game, even when the writing is criminally poor – she nailed it to perfection, in my opinion.

Overall, an improvement over the previous games, hurt by its mediocre writing (that is quite better on the second half, though) that is sadly a constant in the franchise.

The best part of the game and of the franchise, Borderlands 3 feels absolutely phenomenal to play, and I don’t just mean the shooting – the exploration is great and a lot of fun due to a much bigger focus on collectables (mini-bosses, vehicle parts, audio logs and even loot drops), an added mantle system, allowing your jumps to feel much more responsive as you can reach double the places you simply wouldn’t in the previous games without a mantle system.

Vehicle handling is, again, controlled by the mouse/camera and is quite clunky; the exception is the Cyclone motorcycle – fast and light, it controls beautifully, surprisingly enough and I ended up using it during my time with the game.

The gun play is what you’re be doing for most of your time with the game, either shooting them or simply looking at stats and evaluate which gun you should be using: one of the 50 on the ground from the mission you just did, or the under-leveled guns you love but know they suck since you’ve been using them for the past 10 levels or so (true story).

Gun play is simply fantastic as pretty much all guns feel powerful thanks to smooth animations and great visual feedback from using them; guns can have elementals tied to them – from the classic incendiary, shock and corrosive to the Pre-Sequel-returning Cryo (which feels more useful in this game than in Pre-Sequel) and the brand new Radiation element (which doesn’t seem all that great, honestly). The gun play is directly tied to skills as they will change how you fundamentally play the game – from the type of weapons you use to the preferred elementals and even the overall combat approach/strategy. 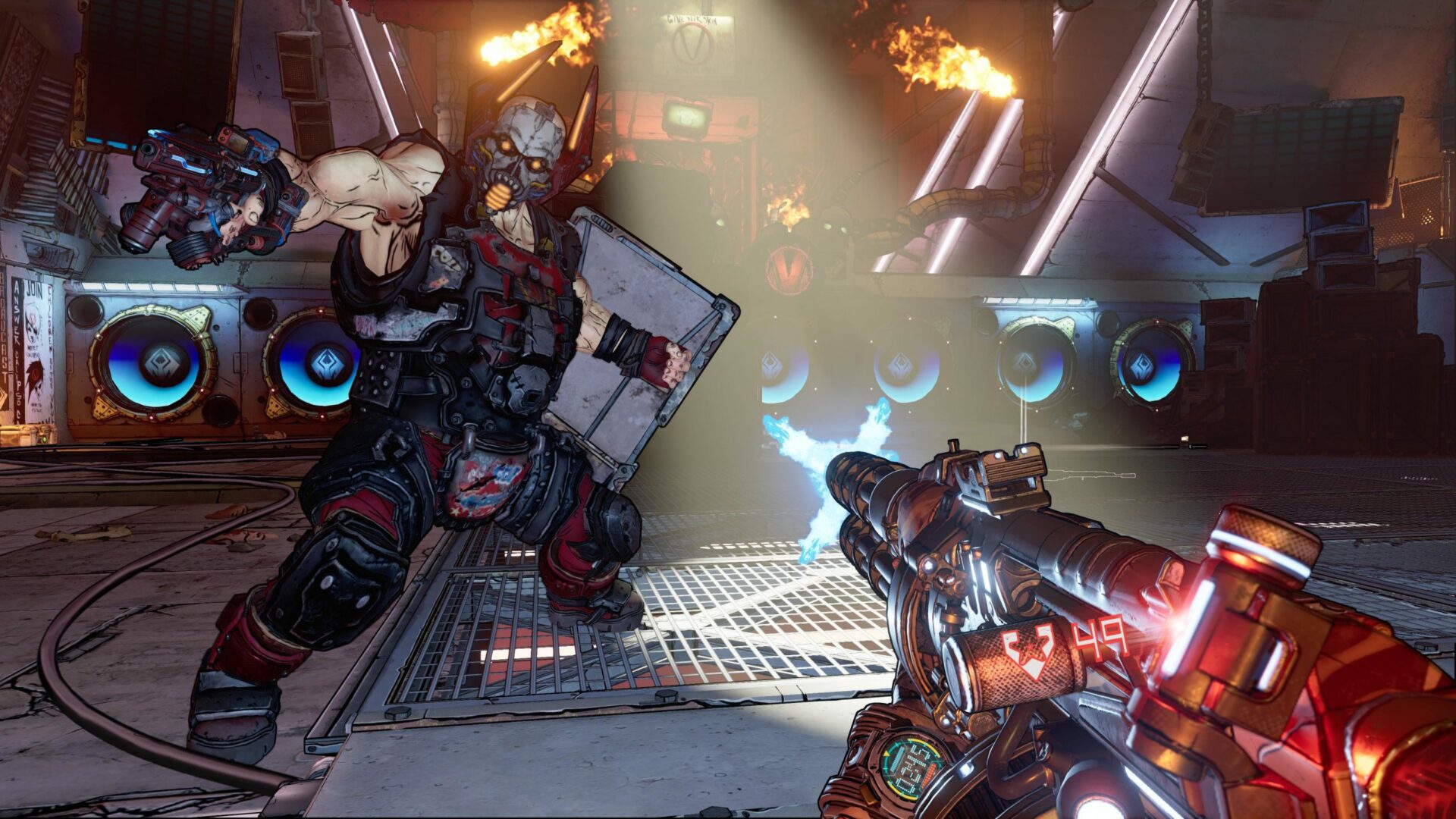 Skills are now much improved from the repeated lazy design of the previous Borderlands games where you only had 1 skill per class, you now have 3 fundamentally different skills you can switch between at any time (though if you change skills, your build might get screwed so a respec is advised), each associated with a skill tree which usually ties to a specific mechanic or build. I can’t speak for all classes and builds by the end game but I’ve played Amara (the Siren) for most of my time and I can at least vouch for her great power at the highest difficulty possible: True Vault Hunter Mode (essentially a fancy name for New Game Plus) with Mayhem 4 activated (will explain later Mayhem). Most of my time was played with a friend using Moze (the Gunner) which also seemed like a viable class – what Moze lacked in survivability and crowd control, his single DPS was far greater than mine. Besides these two, another two classes exist: Zane (the Operative) and Fl4k (the Beastmaster), both with quite interesting.

Amara is still the best, fight me.

Anyway, about the endgame – unlike the previous Ultimate Vault Hunter Mode (in Borderlands 2) where Slag (an elemental effect absent from this game) was literally 95% of the gameplay and the only way you could truly deal damage, Borderlands 3 removed both Slag and Ultimate Vault Hunter Mode and added Mayhem mode. Mayhem is something you can increase or decrease out of 4 levels (from Mayhem 1 to Mayhem 4) which increase the health, armor and shield pool of enemies and add random modifiers to the game. While enemies are more difficult and bullet-spongy, their resistances are increased and maybe they deal more damage or shoot more bullets (these are the more standard modifiers you’ll encounter), you’ll also have modifiers that buff you so the experience is more balanced – you’ll still feel the difficulty by a maxed Mayhem mode but it doesn’t feel as unfair as it could and it proves to be a pretty great challenge for endgame builds.

Mayhem overall feels like a step in the right direction over how boring and limited Ultimate Vault Hunter Mode felt in previous games, but an overhaul is planned for April, titled Mayhem 2.0 so it’s a matter of waiting and seeing what this new phase of the endgame for Borderlands 3 will be like (after the Steam release and the newly released DLC) but Mayhem didn’t seem to need that much of a change so it will be interesting, but also exciting to see what Gearbox will come up with.

Level design is vastly improved overall thanks to a bigger focus on collectibles and the movement improvements (mantling and sliding). Every level feels a lot busier and every location within levels feels fun to visit to find what quirky miniboss may be there, or audio log or even a new vehicle with a new part to customize your cars! Borderlands always had an issue with levels often feeling empty and/or too large, simply wide as an ocean and deep as a puddle. From the very first level on Pandora to the last, all levels feel more packed with content to do and the new traversal mechanics make running around, vaulting rooftops or scaling towers and sliding down slopes the most fun ever when it comes to running around Pandora, questing and adventuring. 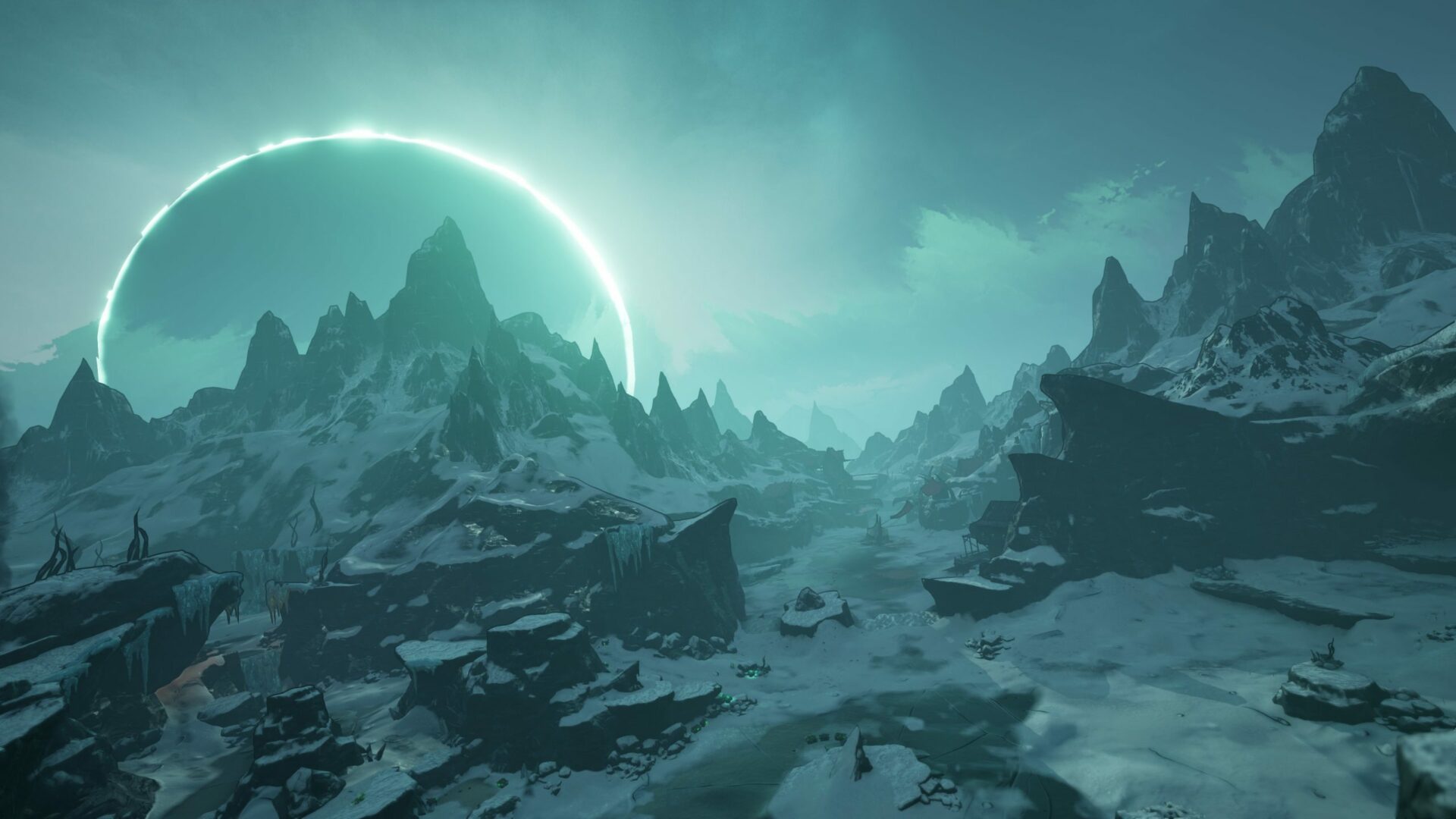 The game now includes other planets besides Pandora and thus exploring the galaxy/universe of Borderlands further, from the calm monk-inhabited Athenas, to the swamp-filled Eden-6, every single planet looks different and even some levels within a planet change their look at even the enemies within them, giving the game great variety and replayability.

Overall, I could sit here all day talking about everything Borderlands 3 has to offer but essentially the game has decent endgame (while fun to play, it’s mostly just repeating the game over and over and only one raid exists right now), great environment variety, fun movement and excellent gun play; the classes are the most interesting in the franchise thanks to the skill variety allowing for even more play styles. The co-op also works great with no crashes or lag. I did find a few bugs during my co-op experience so it’s not as flawless as Borderlands 2 was.

Borderlands never had a truly good soundtrack since the original in my opinion, but 3 fixed it and it’s really fun to explore while listening to the soundtrack of the game – even the epic moments during the main questline are riddled with great tracks!

Gunplay is also enhanced thanks to great gun sounds, reloading has great sound assets and simply everything sounds great, even enemies screaming while fighting you or their death screams on nonsense (“Tell my children… I wish they were born” cracked me up the first time I heard it).

And finally voice-acting – Tyreen, BALEX and Ava are the best in terms of acting but also dialogue/writing overall and are seriously great, top of the series. The rest is well voice acted but felt a bit like going through the motions and simply weren’t as fun to listen to (or even care about), Tannis and Typhon are exceptions but still not at the level of the three greats I mentioned just before. 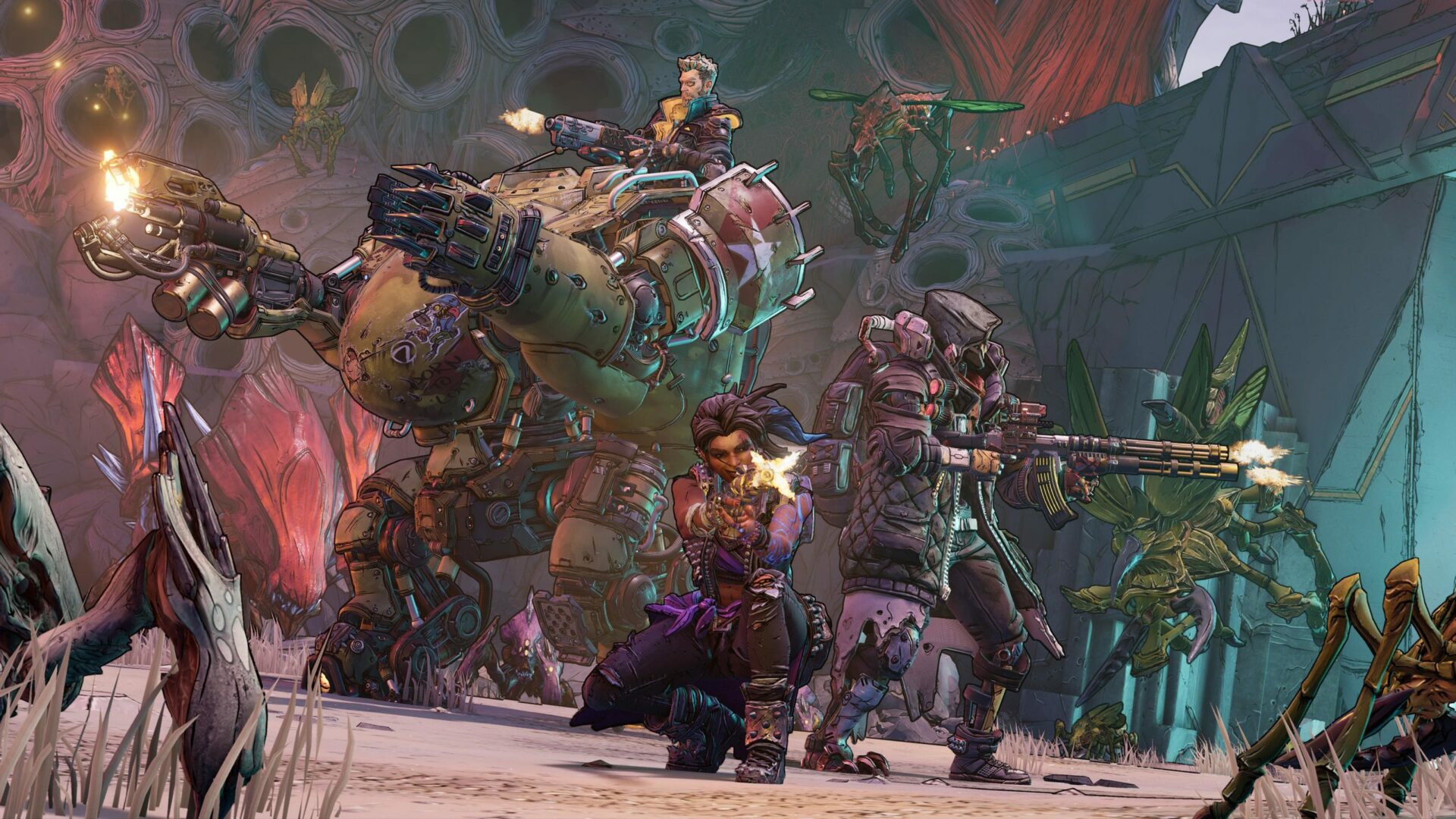 Overall the game is still probably the best yet in the audio design and reduces all the annoyances in the previous games (where comedy was mostly done through screaming and nonsensical dialogue). At least I ended up laughing in this game far more than in 2 and Pre-Sequel, which were close to never, honestly.

Upgrading to Unreal Engine 4 was a great choice for the most part – the graphics and effects look great, on top of the cell-shading. The cutscenes are more abundant and look great with the classic Borderlands style. The graphics options are extremely customizable in order to configure your best setup (by the end, so many effects and explosions will be around you that turning a few settings down a notch is recommended), from an extensive FOV slider to resolution scales, you can change pretty much anything in the game.

Sadly… the performance is beyond terrible, even at 720p and 50% resolution scale I had roughly the same framerate at 1080p and 100% resolution scale which makes absolutely no sense. The performance, while roughly at 60FPS in most combat scenarios and even in moments with a lot of stuff on the screen (not just effects but also buildings, materials, etc. even without combat), my framerate was oscillating more than it ever should, even with my PC which beats the recommended settings.

The best of the franchise and one of the best looter-shooters I’ve played, Borderlands 3 is absolutely worth your money, though I’m recommending with caution due to the performance issues, and occasional co-op bugs.