REVIEW: Iris and the Giant

The constant struggle within

Well, it seems that I can’t stay away from deckbuilding card games even though I’m well aware that I’m terrible at them. At least in this case, I’m not a stranger to a deckbuilder that destroys your card once you play it as I absolutely loved Phantom Rose. While I was drawn to the visuals and the narrative, it only got me more interested when I found out it was another game where your cards are destroyed after one use.

Iris and the Giant focuses on a girl named, you guessed it, Iris who seems to be suffering from anxiety and depression. All the player knows about Iris is that she loves Greek mythology and she takes swimming lessons. One day during her swimming lesson, she perceives the other kids laughing at her as she stands on the diving board. As the emotion swells inside her and threatens to spill out, she dives. However, before we see her hitting the water, we’re teleported to another world. Instead of a swimming pool, Iris is dropped off on an island with a ferryman giving her a pouch full of cards so she can fight her inner demons. 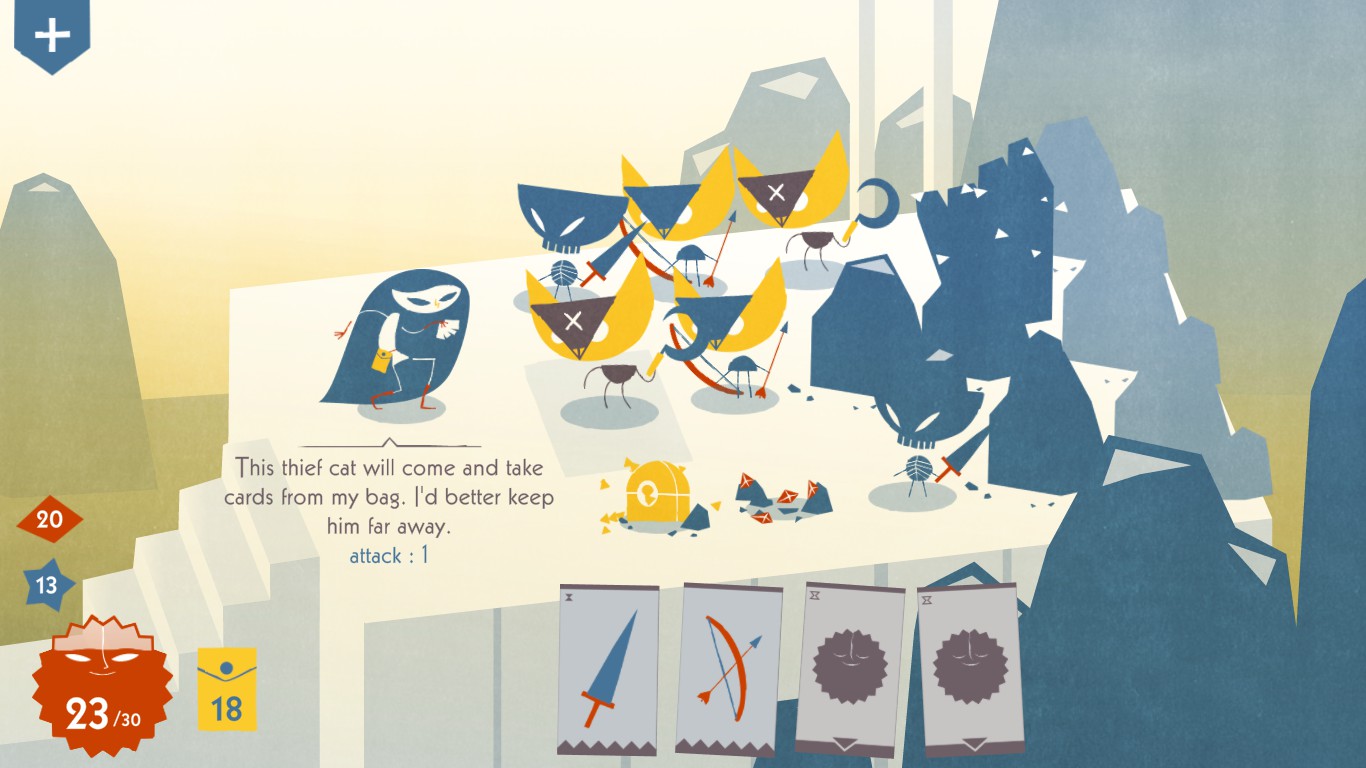 From there on, you’ll be tasked to get Iris to climb the various floors until she reaches the top. However, demons have taken up residence on every floor and are dedicated to not letting Iris get past them. The demons won’t hesitate in attacking her, so Iris isn’t as she uses her cards to attack or protect her. Instead of battling one or two enemies at a time, Iris and the Giant puts you up against many as enemies fill up any spot open to them. Each column contains a mix of enemies, rocks, chests, crystals, and jars with you only being able to see what’s in the first three rows. 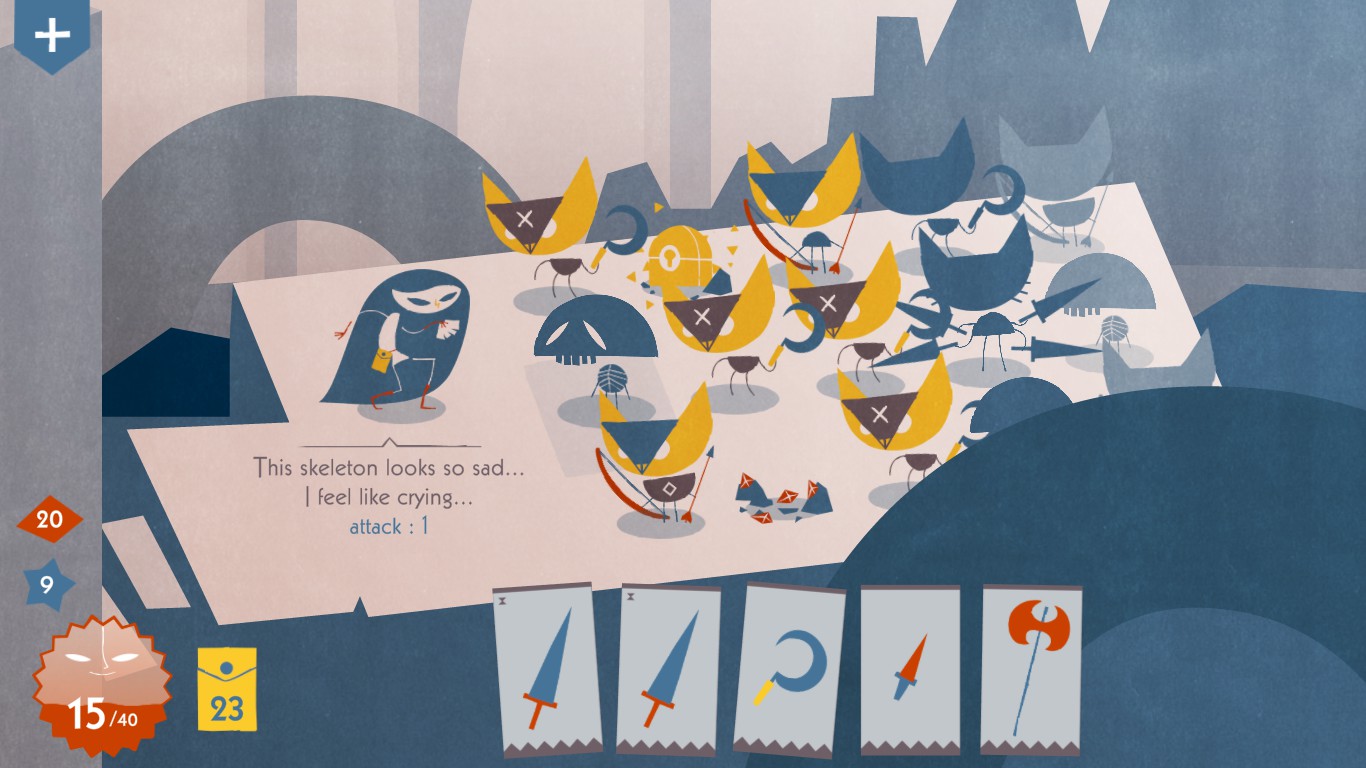 Every turn starts with you drawing cards, assuming you don’t already have a full hand, and playing at least one card to pass the turn off to your enemies. There are 51 different card types, but to make things simple you have cards that will attack your enemy, give you a shield, or heal your Will. Your attack cards will either be normal or magical and vary on their range and how many enemies it’ll hit. Enemies are more varied. Most enemies are melee-based, with only a few being ranged, with the ones with specific abilities taking on a new look. Considering that only the first three rows are visible, those only those enemies can act, you can try to avoid killing an enemy on a row so an enemy that would cause problems won’t slide forward. Once you get far enough, enemies will also start wearing armor and the amount of diamonds they have indicates how many hits are left before it breaks. All enemies that can attack you will on their turn and if a space is empty, they’ll slide forward and reveal what’s behind them. 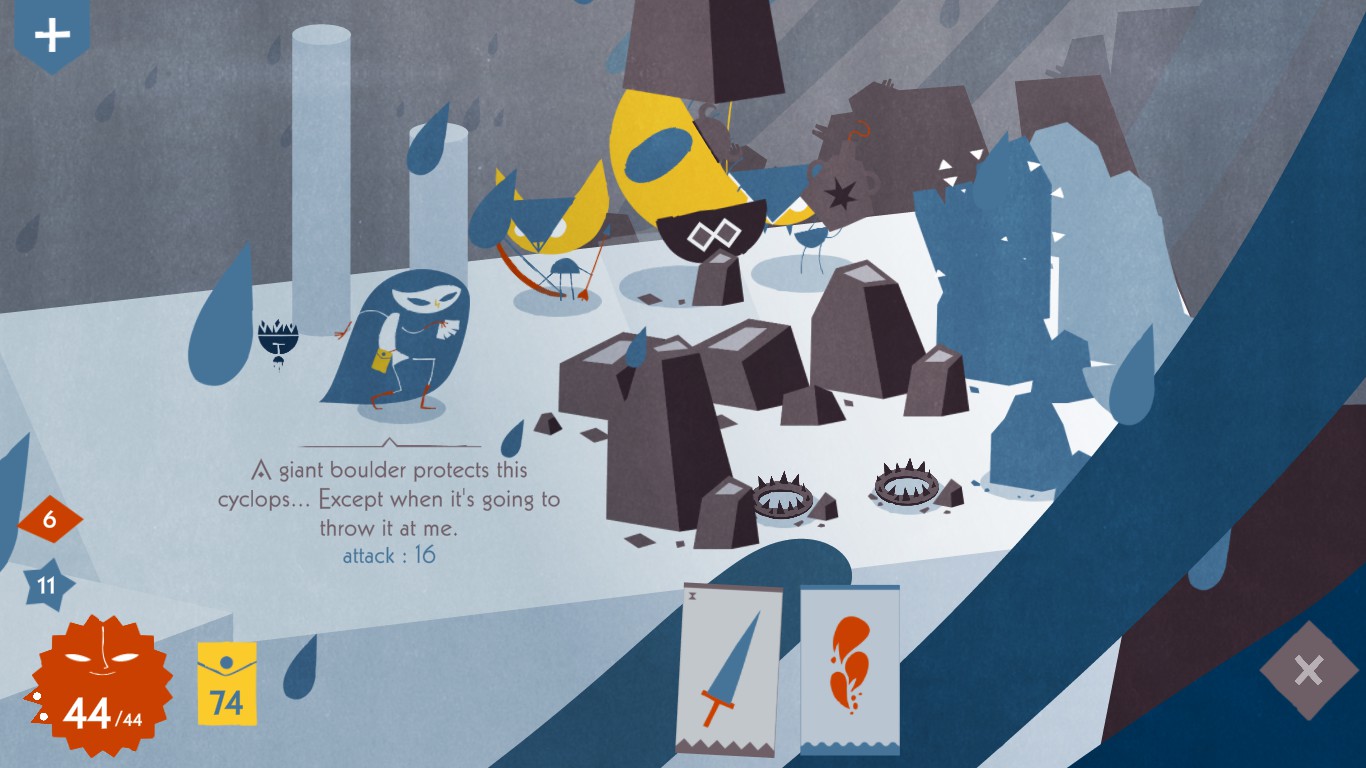 Every enemy you defeat will give you one star. After you get so many stars, the amount you need is visible above your Will, you’ll be able to improve your abilities (or personality) or open a chest. If you think you need more Will or want to increase your draw hand, you can improve the corresponding personality. Or pick to open a chest if you need more cards. In addition, big enemies (or in most cases bosses) will grant you a magical power upon defeat. Magical powers are just advantages like improving an attack card.

Of course, enemies are not the only things taking up spots. There are chests that will give you more cards, crystals that will give you a chance to pick up a rare card if you pick up a certain amount, jars that will have stars or cards depending on the run, and rocks which are mainly to block your way or can even contain chests or crystals. Lastly, there are stairs which lets you go to the next floor and gets you ever so closer to the top. However, some floors do have secret stairs that are hidden behind rocks as well as some having a secret path only revealed if you defeat all the enemies (though I haven’t revealed any of these yet). 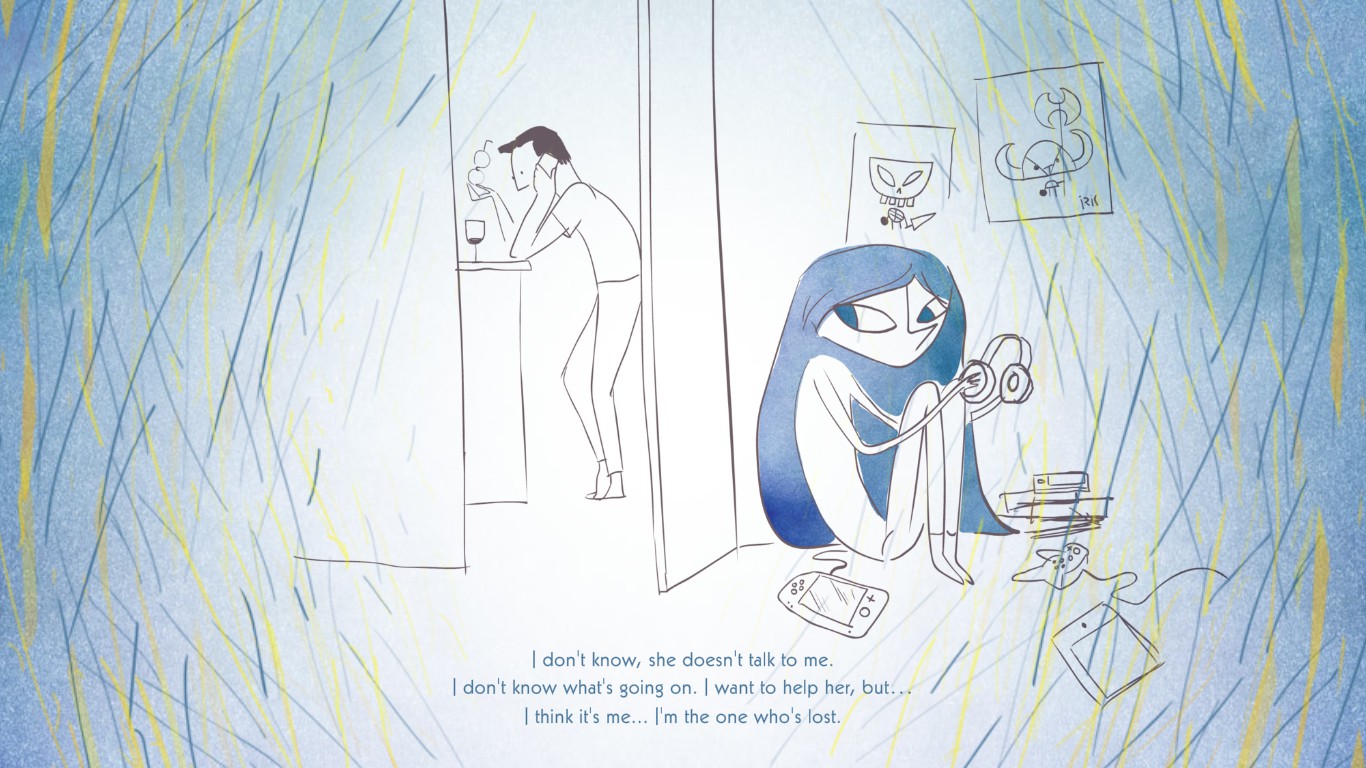 If you run out of cards, your Will gets down to zero, or your only cards are Sorrow cards, you lose. Don’t worry too much, as Iris and the Giant is designed around you losing so you can come back stronger for your next run. This is more evident on your first few runs as you can’t win until a couple of things are unlocked. After that, you’ll get gifts depending on how many stars you collected that will give you a temporary advantage that will only take effect for your next run. There are also memories, which spawns on a floor every so often, that will give you a snippet of Iris’ past and give you a way to gain a permanent advantage like being able to grab a certain card in chests as long as you have it selected. Lastly, there are imaginary friends which require you to complete their challenge before you can actually use them. Imaginary friends are another source of a permanent advantage, but some friends come with drawbacks. 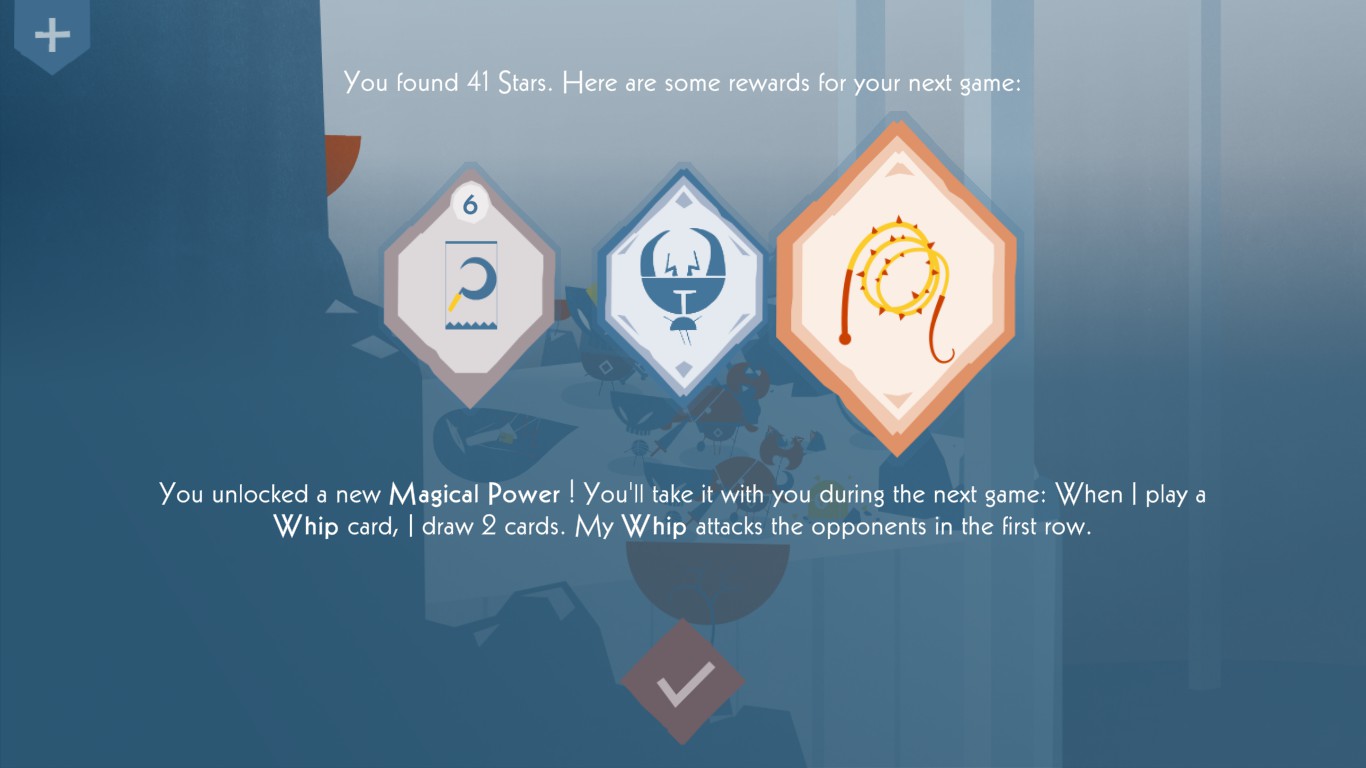 Iris and the Giant is the type of game where the positives are easily it’s negatives as well. The game does put focus on the player figuring out how to fight new enemies and bosses aside from a hint, but at the same time, a good handful of enemies require certain cards. Like there’s an enemy that won’t take any damage unless it’s from a magic card and there’s a chance these enemies have armor. The bosses also suffer as some will also need you to luck out on enemy positions due to those bosses not being able to be targeted directly. There also isn’t a way to redraw (which is what Phantom Rose benefited from) unless you manage to get the gift that lets you do it four times. Iris and the Giant isn’t a bad card game. The art is simplistically cute, but still able to communicate basic information, the music and voice acting are good, and I do like the gameplay and how it wants you to learn by doing. However, at the same time, it’s frustrating when you can’t combat your enemies due to not having the card type or the enemy positioning. If you’re someone that doesn’t mind that your cards are destroyed upon use, don’t mind that you’ll come across situations where you can’t defeat enemies, and looking for a card game where runs are quick, Iris and the Giant might interest you.