Love Esquire starts off on your birthday. You’re just a lazy farmboy in Caerulia that dreamed of becoming a knight since you were little. Well, your birthday comes with good news and bad news. Good news, you’re now squire! A knight named Hugh decided to take you as his squire and this is your glorious debut. You’re now one step closer to your dream. Bad news, a war is coming up. Yep, couldn’t have picked a better time to become a squire. You see, there is a horde of barbarians named the Gegners that are dead set on destroying everything in their sight. With this massive threat, Caerulia actually forges an alliance with another kingdom called Alkosi despite their troubled history. The war is set to begin in four months so in this time, you’ll have to say goodbye to your darling cow Bessy, train up so you’ll hopefully survive the war, and get laid so you don’t die a virgin. 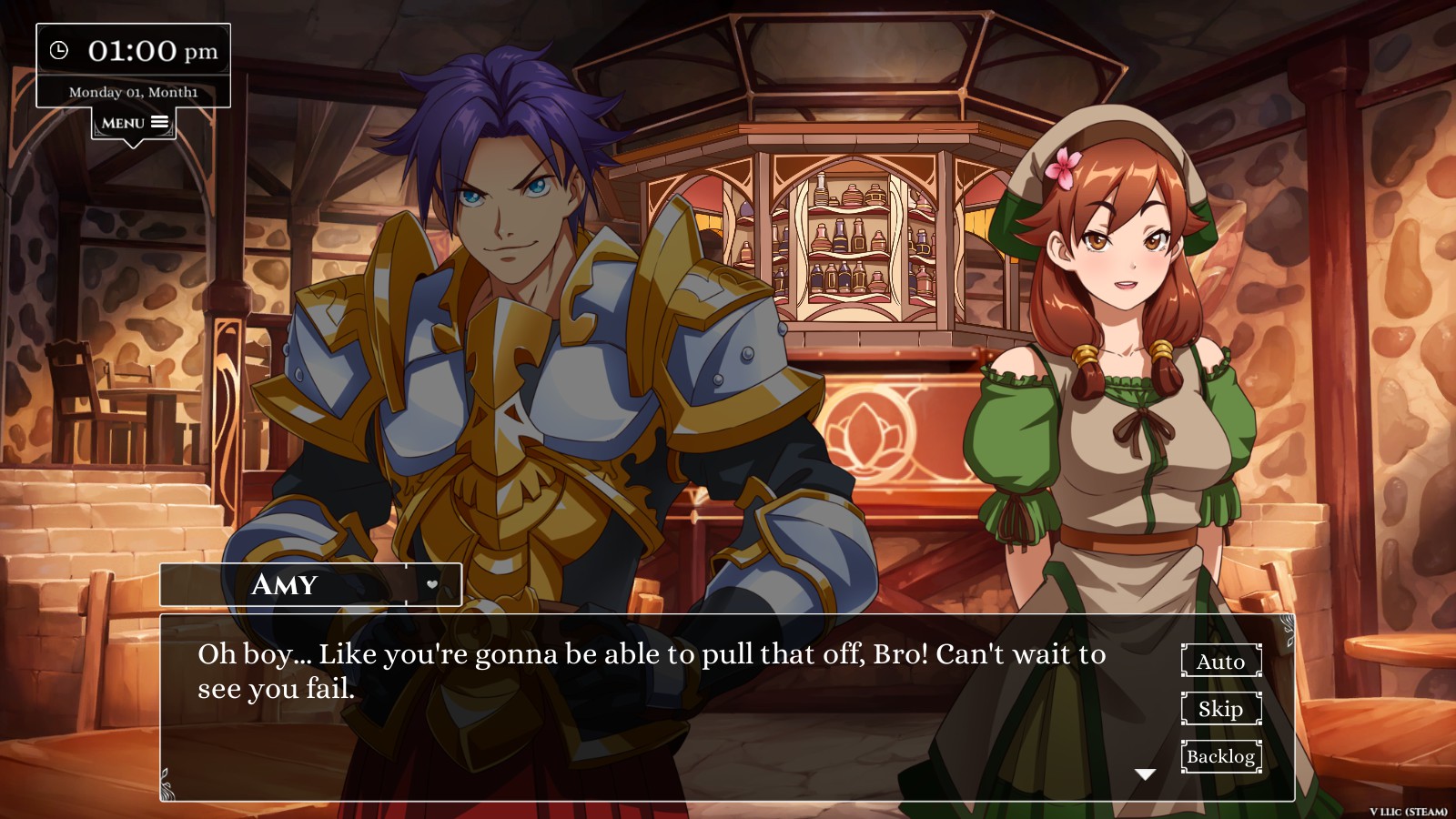 Considering that you only have four months before you’re sent off for war, time is precious. A part of Love Esquire is about managing your time wisely as mostly everything you do will move time forward by at least an hour. Travelling between areas takes 1-3 hours depending on how far away you are, training takes a big four hours, campaigning takes time, and talking to the dateable ladies takes an hour. So once you get the feel of everything, you’ll plan out your day or even week. Especially when each day ends at midnight and it’s best you get home at or before then. Sure, you can stay out and not return till right at midnight, but there is a penalty. If your arrival time is after midnight, you’ll sleep in and wake up at noon rather than 6am. 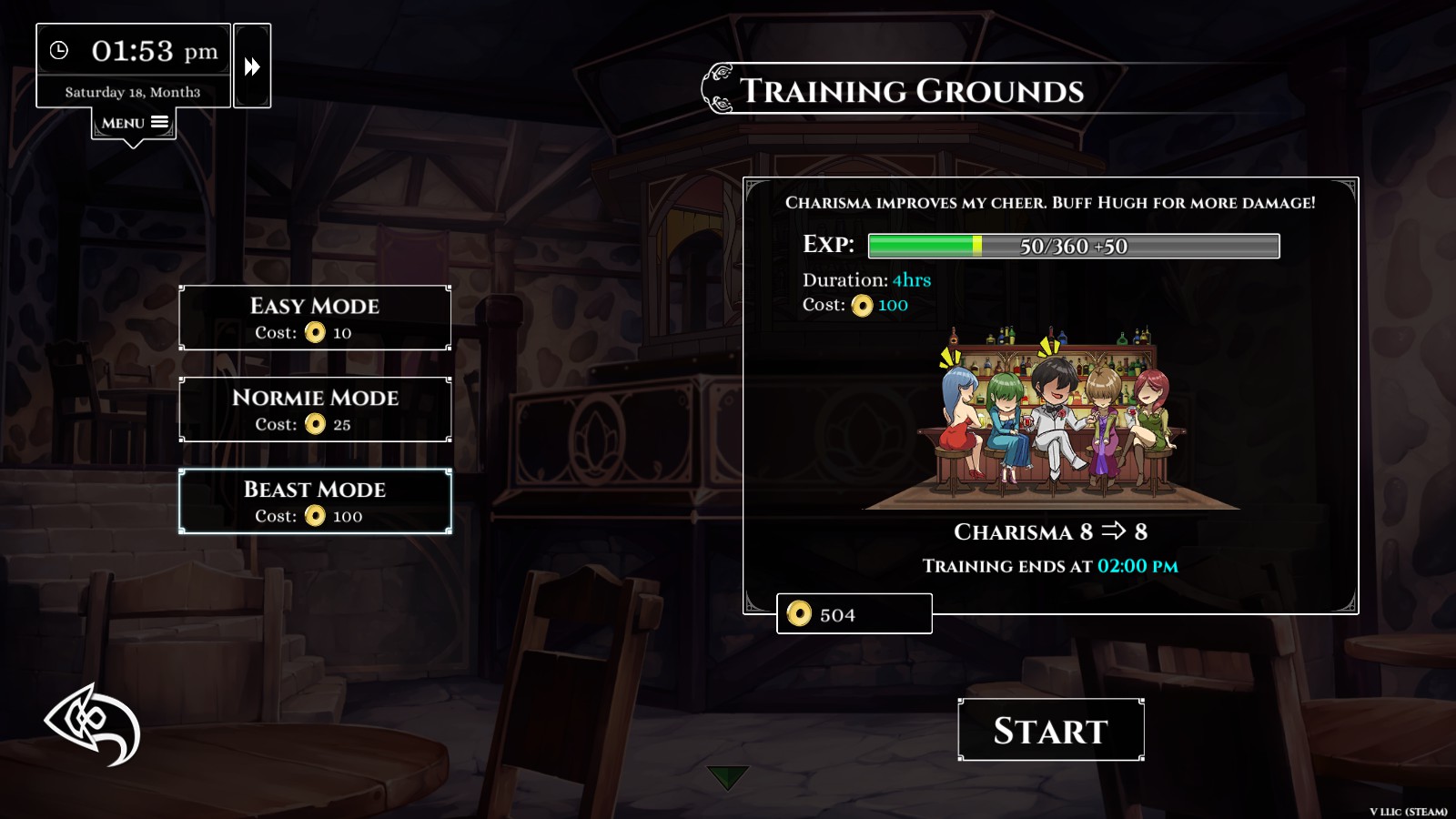 With a war right around the corner and you being a squire, it’s time to train up. Considering that you have many aspects to take into account and you most likely want to romance one of the ladies, you thankfully only have three stats: Charisma, Strength, and Intelligence. You can train up your Charisma at the Tavern to improve Hugh’s damage input, Strength at the Barracks to improve your and Hugh’s damage input, and Intelligence at the Archives to increase how much you heal for. Of course, training doesn’t only cost time but gold. While you do unlock different training modes that let you gain more EXP, these different modes also cost more gold. Sooner rather than later, you’ll run out and then you’ll have to either sell items you find or go out and fight enemies with Hugh. 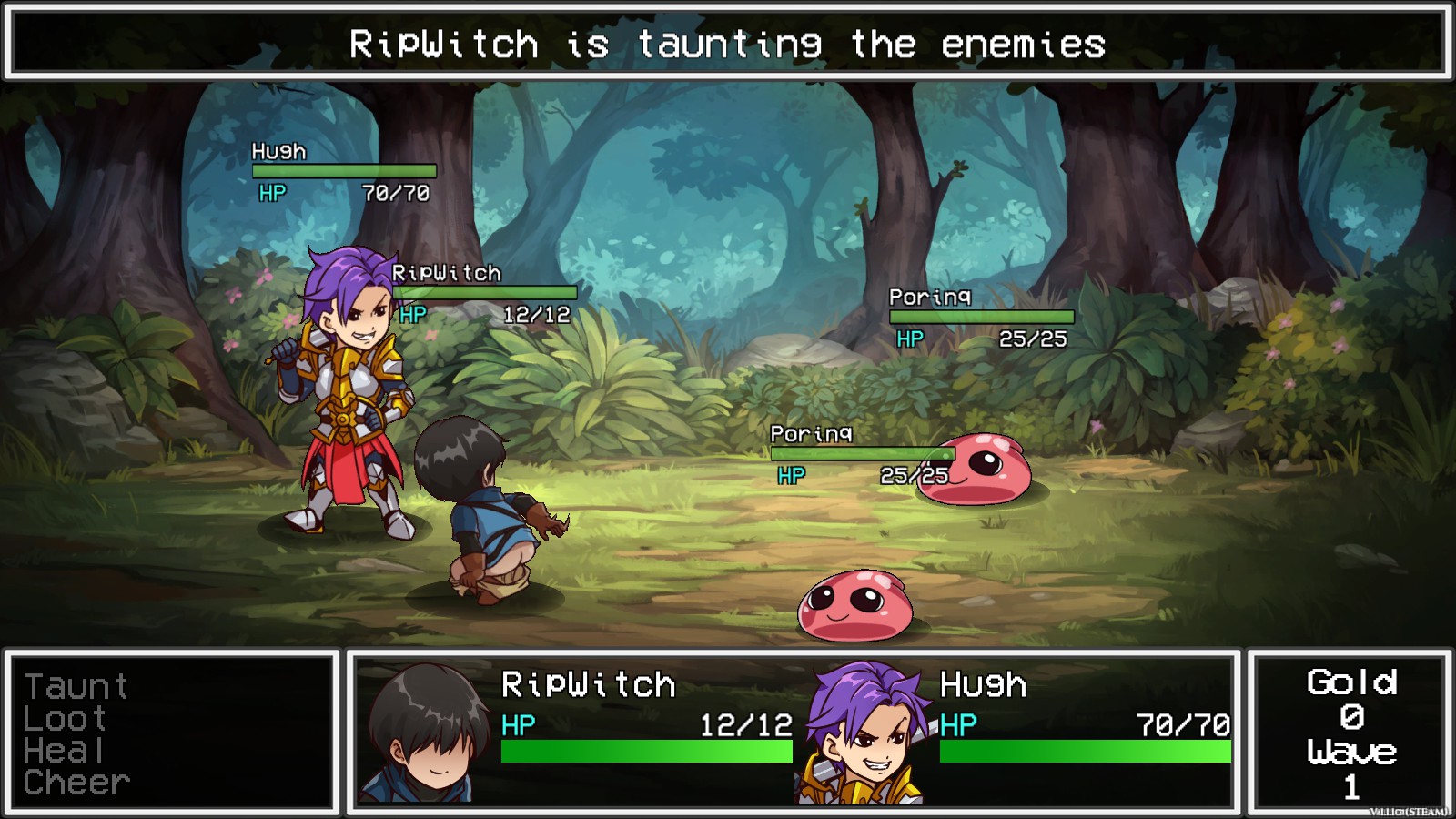 What’s the point of training if you can’t get practice fighting actual enemies am I right? Well, Hugh will also run campaigns almost every day. Though you have to be at Caerulia’s Outskirts before noon or he’ll leave without you. There are 15 campaigns, each unlocking as you complete the previous one. Campaigns are basically your main source of gold and where your stats will be used the most. Though, rather than you fighting, you’re supporting Hugh like the good squire you are. As Hugh is only set on attacking, you’re tasked with making sure he doesn’t get his butt kicked. If you want Hugh to go a turn without damage, taunt your enemy and take it instead. Cheer Hugh on with boobs so he’ll attack all enemies (and hopefully wipe them all in one go). When you two, but mostly Hugh, are in need of some health, it’s your responsibility to heal. Once an enemy dies, they’ll leave behind some gold. Since Hugh doesn’t pick it up himself, it’s also up to you to loot the gold. If you are dedicated to maxing out your stats so you can survive longer you’ll eventually be able to limit break an action, which is the more powerful version. So doing a limit break heal will heal you two more and give regen for a couple turns. 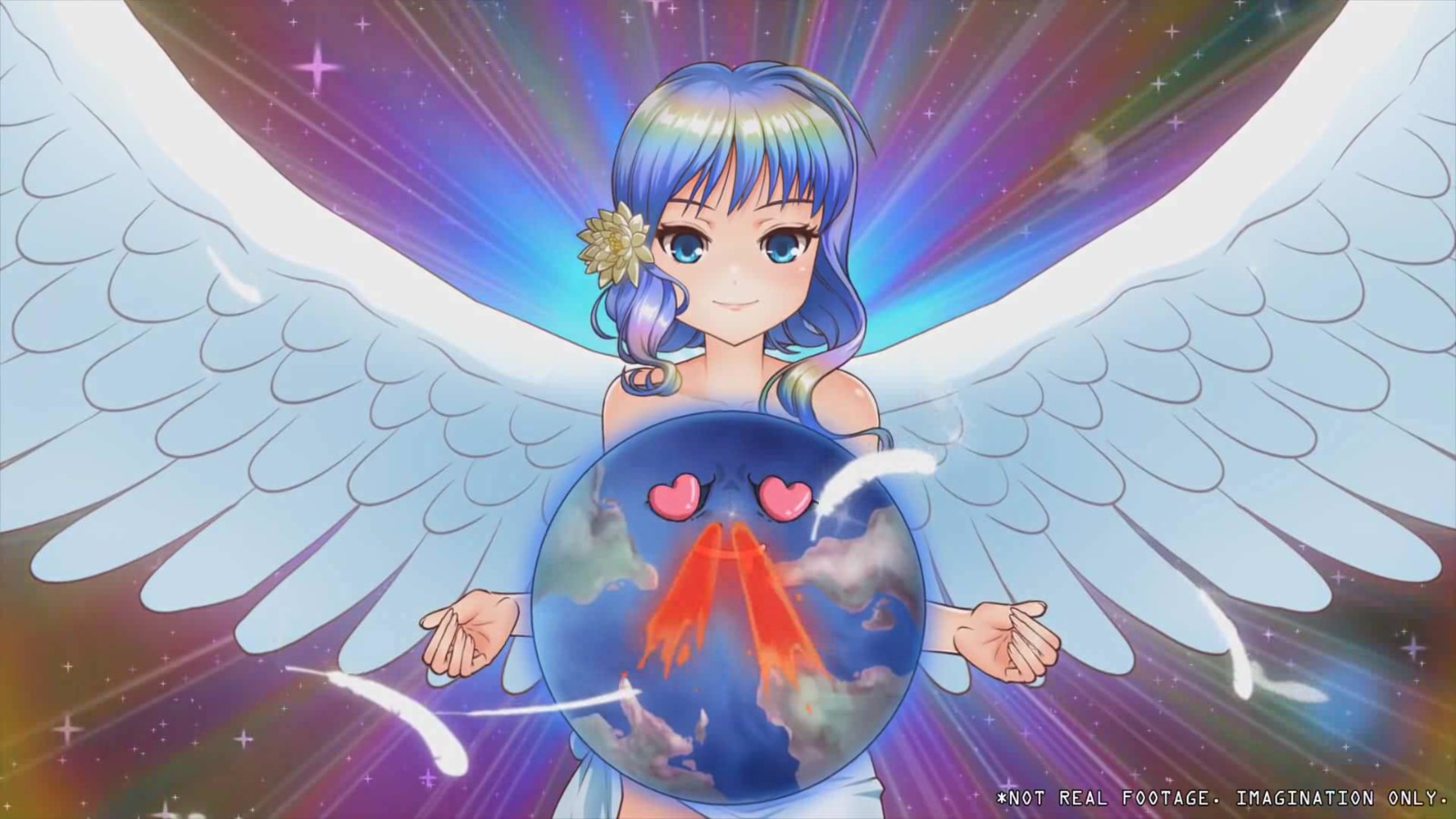 While you’re not the one attacking during combat, you have to figure out what action to take at a given time and even plan out your actions in the later campaigns. Are you going to risk looting or cheering this turn or are you going to play it safe with one of the other actions? Should you prolong the battle to get more gold or just get it over with before Hugh dies? Just make sure you train up and you should make it out fine. If enemies happen to overwhelm you and Hugh faints, you can always train and try again. Luckily you do get gold if you fail, but not as much as you would if you succeeded. 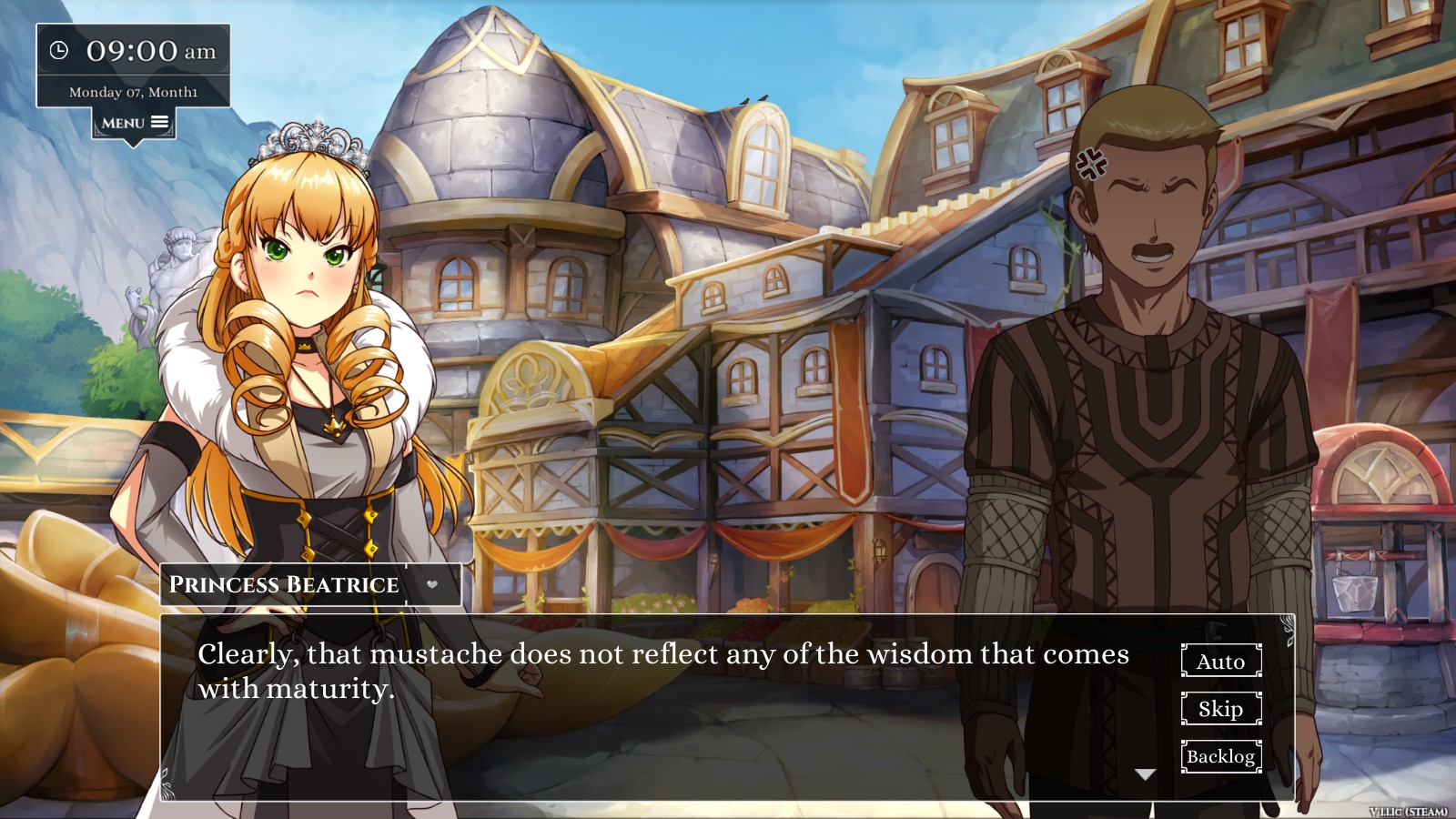 When you’re not training or going on campaigns, it’s time to chat it up with the finest ladies in Caerulia. You have five romance options consisting of a smallfry (Vel), a reclusive nurse (Giselle), two princesses (Beatrice and Kamala), and your sister Amy (wait what). This is actually the best part of the game since the writing here is fantastic. First of all, you’ll have to build up your relationship points with the one you want to go for and to do that, you have several ways. Each day, you’ll be able to talk to them about a certain topic and gift them an item with the more they like it the more points you’ll get. Their arc scenes, which becomes available as you increase your relationship level, gives out the most points as you’re going through their story and being there for them. The arc scenes in particular also determines which ending you’ll get (bad, friendship, or romance) depending on which dialogue choice you choose in certain scenes. Lastly, there are special scenes that are hidden here and there to give you more scenes to enjoy and gives you context on what they’re doing between each arc scene. 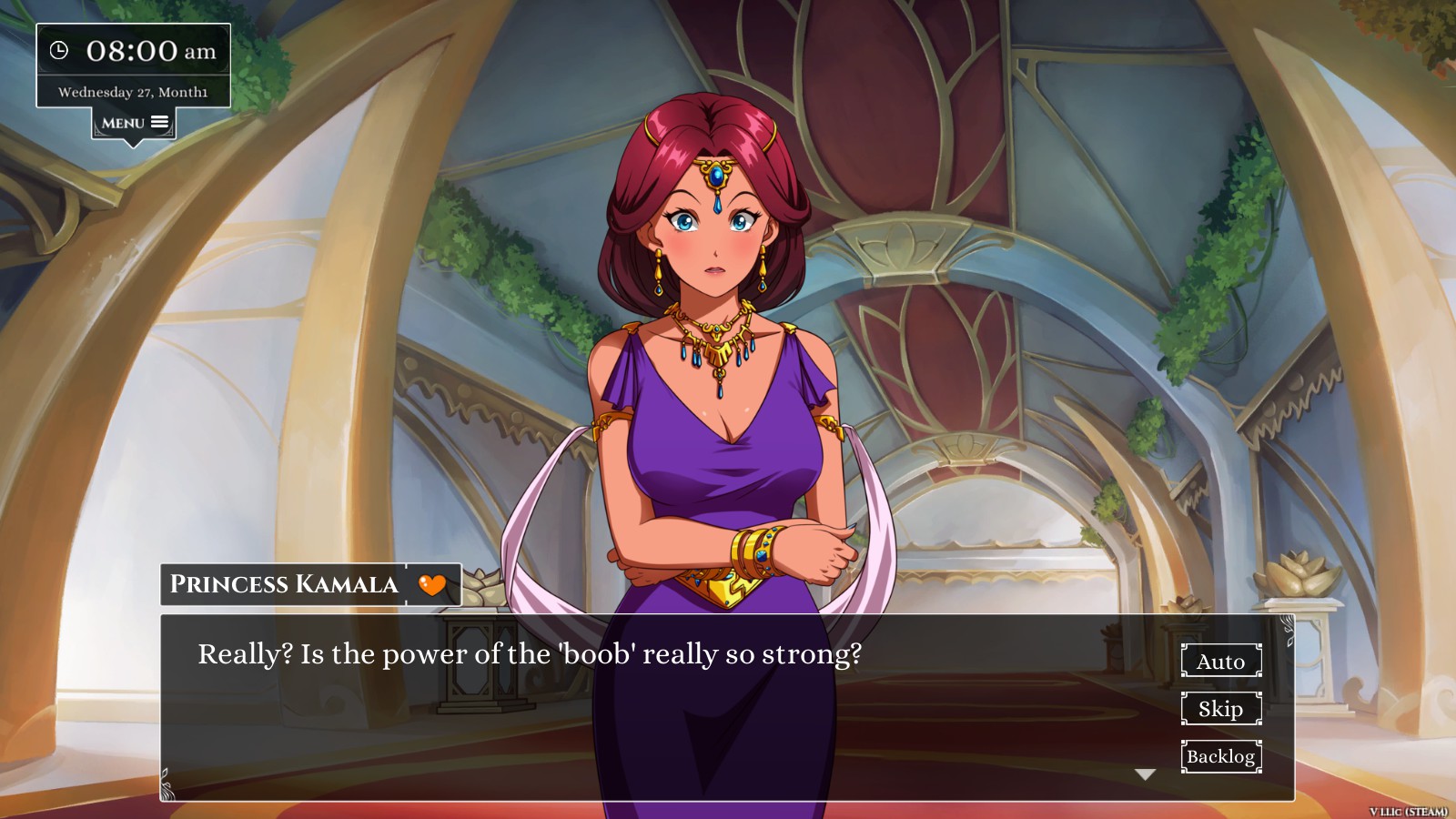 Now, onto why I ended up loving all the ladies and why you should play through all of them if you decide to pick up Love Esquire. When you’re first introduced to all of them, you’ll obviously prefer some over others. I started out only liking Amy, who isn’t that hard to not like, and Giselle. Though, when I actually went for the others their characters really shined as you get to know them. While Amy is your happy go lucky sister (who isn’t actually your blood sister since her family more or less adopted you), she truly cares for you and is deeply worried over you going to war in a few months. She actually doesn’t want you to participate in the war since she’s worried over you dying like her mother and you’ll later have to deal with a family secret. Giselle is reclusive and doesn’t exactly know how to express her feelings, but seeing her slowly open up to you is a great feeling. With Giselle, you see the inner workings of being a nurse, hear her history as well as your character’s history, and the hardships she has to deal with due to her unfortunate history. Vel is a smallfry that goes between rowdy and timid, but you get to see her struggle of keeping a huge secret that’s at the heart of her story, being one of the few survivors of Bordemer (which was destroyed by pirates and the Alkosi is blamed for it), and not wanting to get involved in a group of rioters that publicly condemn the Caerulia-Alkosi alliance. Beatrice is a bratty princess, but you see her struggle of being in charge, dealing with other nobles who are constantly trying to tear her down, trying to make an impact in the form of the Caerulia-Alkosi alliance as she’s the first female ruler and wants to be a role model for future female rulers, and how the rioters affect her. Then lastly, Kamala is the Alkosi princess and diplomat that wants to experience and learn about Caerulia’s traditions and culture, but you get to learn about the hardships she faces in Alkosi, learn about Alkosi, and see the backlash she’s getting from the rioters and how she’s dealing with it. 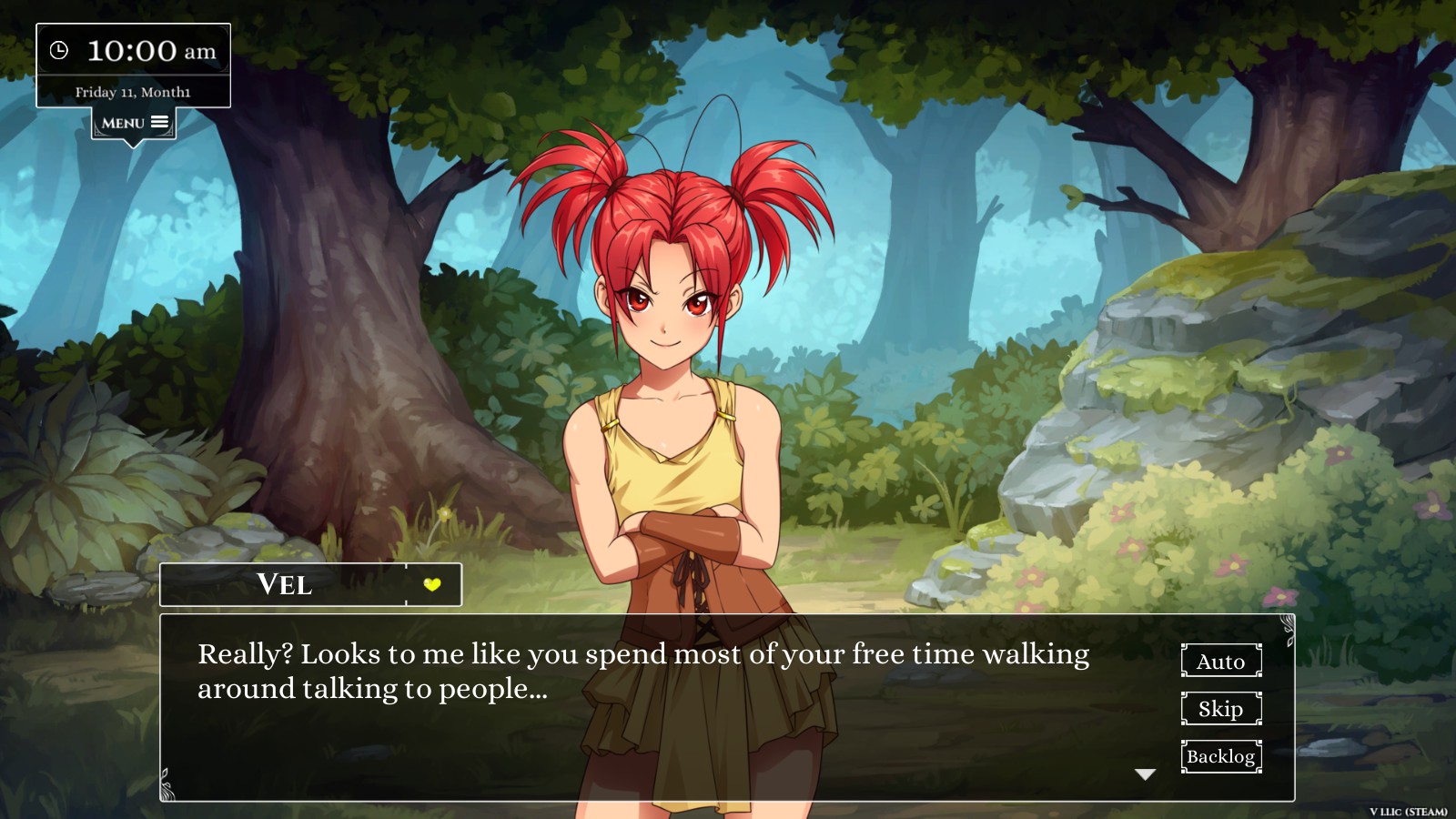 None of these romance routes necessarily intersect, but they do have aspects in common like the rioters are part of Vel’s, Beatrice’s, and Kamala’s story. I really liked how Love Esquire’s story is based on who you’re romancing, with you becoming a squire right before a war being the framing device and time limit. While this means that you are missing chunks if you don’t romance all of the ladies, it does give a more personal touch to your relationships with each one. Otherwise, it doesn’t make sense why you would run into certain information if it was a set path (like why would Amy or Giselle know about the rioters when Amy doesn’t care about the nobles and Giselle only cares about her work). 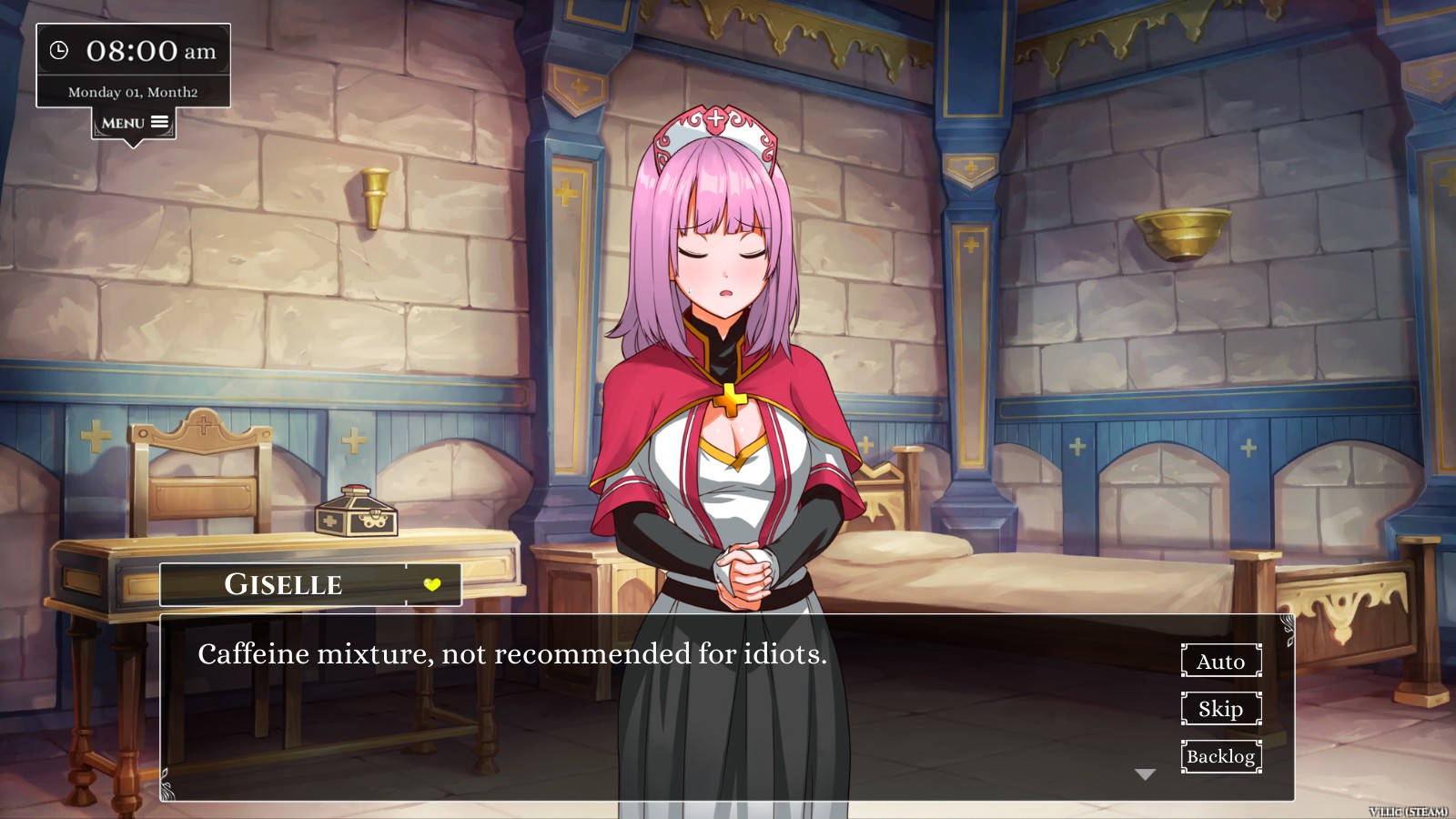 Love Esquire is also surprisingly fully voiced, but this also has the one truly negative aspect of this game. At one side, the audio level is perfect and the delivery is great. Some lines were made even better with the delivery the voice actors did and we got the absolute gold voice that is Amy’s. However, on the other side the audio level constantly fluctuates and there are some lines with poor sound quality. You’ll have a scene where it’s at the perfect level, but then it goes to the lines being too soft where you can barely hear them or the quality suddenly changes. Then you have the absolute worst lines that are both too loud and have a bad audio quality. If you ever encountered a Youtube video that suddenly got really loud and purposefully recorded it poorly, it’s that. Hopefully this gets fixed soon for future players. 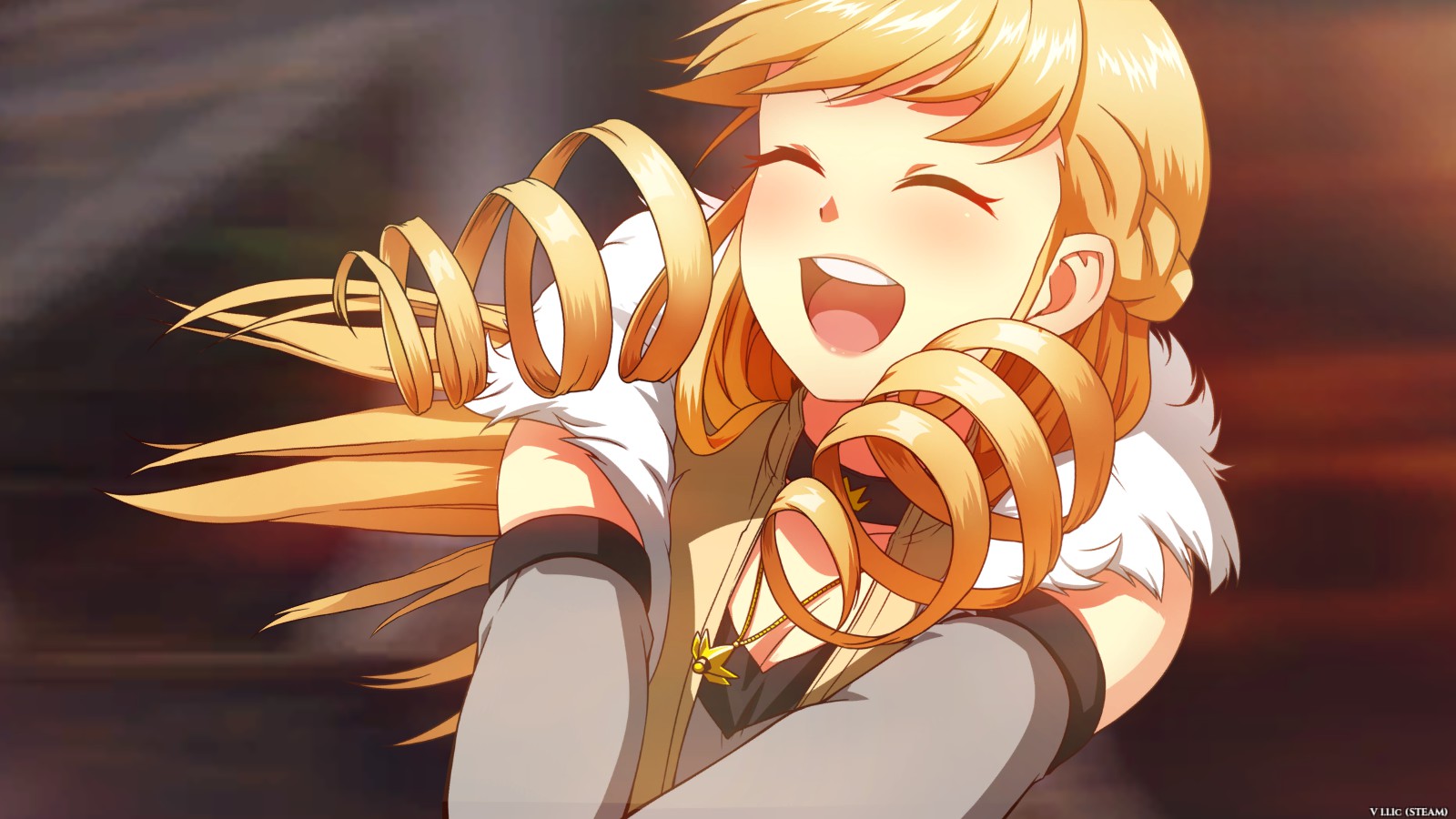 Once you complete your first playthrough, you’ll be able to enter NG+. NG+ transfers all of your stats, items, gold, and relationships so you don’t have to redo anything or lose what you didn’t use. As well as unlocking all topics for the girl you just romanced just in case you didn’t go through all of her dialogue, lets you go to sleep at any time, and will give you the ability to reset relationships for the characters you fully romanced. This makes it way less tedious to replay when you’re going for the other ladies and the other endings for each (psst there’s a harem ending). Though, I am surprised there was no way to reset your stats.

If you’ve been wondering whether or not Love Esquire is worth the price, I can say it is. The writing here is fantastic and the five ladies you can romance are wonderfully written. Even though you might not like some of them when you first meet them, when you actually go through their story you’ll most likely will by the end of it. Even the main character isn’t as annoying as you would think. Usually I hate characters where their only purpose is to make sexual jokes or worse, constantly ruin a serious scene with them, but the main character is tolerable. I can only suspect that it’s because he does grow and his character isn’t zeroed in on getting laid and making sexual jokes. And when there are sexual jokes, it doesn’t fall flat and is placed appropriately. It also helps if you’re not going in Love Esquire expecting the focus to be on the rpg half and don’t mind the combat style this takes on.