Imagine you’ve just opened up what looks like another R-Type game. Shooting up aliens in your spaceship, it’s straight forward, and you are untouchable. Then you misjudge a hitbox, you think you’ve just lost your first life, but then your weapon changes completely without taking away your ship. This new gun is shooting everywhere except in front of you, but now enemies are coming from the top, bottom, and behind you so it kind of makes sense. Another hit, but you still haven’t lost a life, you shot a power-up and something was announced in German. This is not the game you thought it was 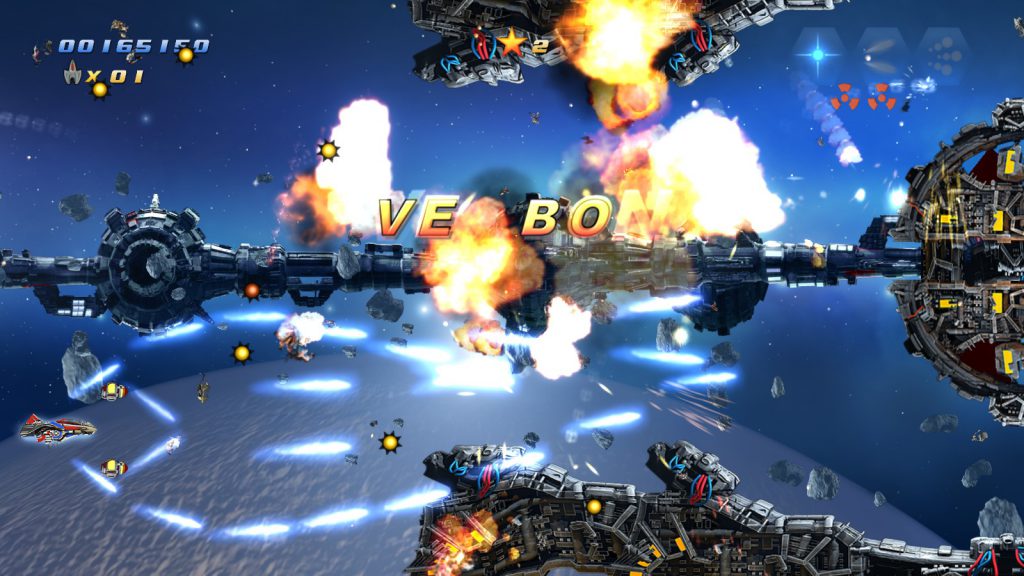 It’s pretty forgivable to skip reading a game’s manual nowadays: most games hold your hand or use level design to take care of this part, or they follow the design philosophy of “easy to learn, but hard to master.” But Sturmwind EX manages to lie just outside either of these scenarios. Selecting play from the menu will give you the option of mission mode, arcade mode and how to play, and the last option is key.

The three different weapons behave very differently. The Northwest can be fired 360 degrees depending on when the fire button is released, the Rudel fires a narrow stream of bullets, and the Lichtblitz fires 2 streams of bullets that flare out and then converge again. The weapons can be cycled through freely, and you’ll have to think carefully about which weapon system you are using when you pick up power-ups to upgrade your weapon system with drones. The weapon system has to match the power-up in order to upgrade, so that means shooting the power-up careening towards you and then swapping to that weapon. Getting hit takes away your current weapon system and its upgrades, but picking up its power-up will restore it. And in this dance of juggling weapon systems, the player can find bliss and eternal life. 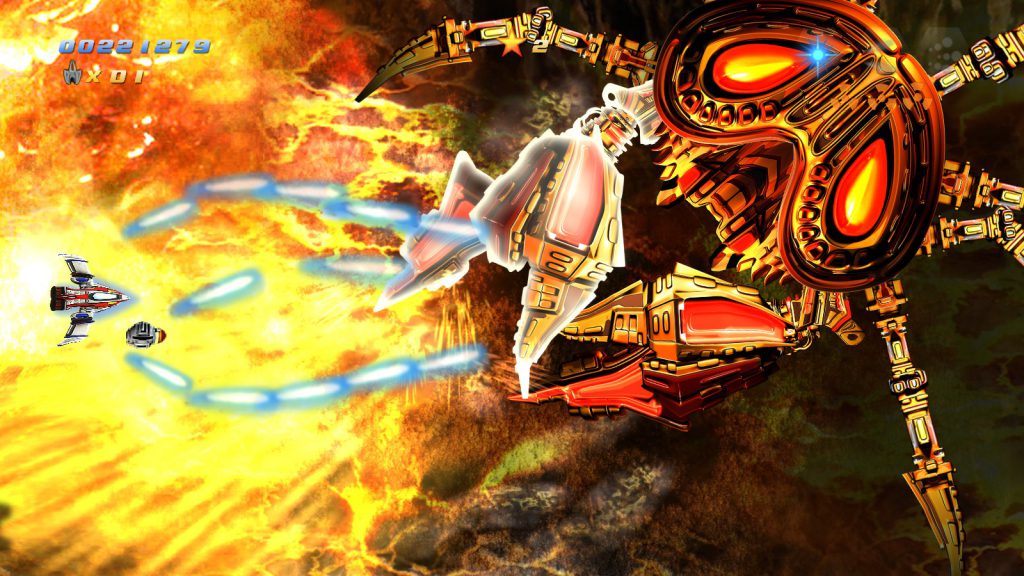 Past the tangle of weapon systems, there is the rest of the gameplay. You have a smart bomb that will obliterate everything on the screen and deal heavy damage to bosses while also giving the player some invincibility frames. The player can also switch to shooting backwards which will be handy for shooting the many enemies that either attack from the left side of the screen or like to swirl around the player. Shooting behind also rearranges your drones so that they will fire forward while the main weapon fires back. Lastly there is a high-powered but volatile beam that can be charged for damage, but charging it too much will overheat the ship and destroy your weapon system. I rarely used the beam due to its spicy nature.

With all of these pieces in place, players are given a bevy of options to tackle the enemies. The standard enemy ships are also accompanied by many headache-inducing hazards. The yellow-hued mines that swarm the screen frequently melt into the many red and yellow tones used in the game for effects, projectiles and backgrounds. Some times debris, mechanical arms, giant fish, or explosions also cause damage. Also, at one point there is a wrecking ball and I’m nominating it and every debris in this game for the best villain of 2019. The game kind of gives a warning by dropping a signpost and pointing out danger, but it doesn’t actually negate the need for trial and error. It’s also worth mentioning here how the game also uses limited view at points or shifts vertically in addition to the usual horizontal. Chalk it up to cheeky coin eating level design, but it was also frustrating. 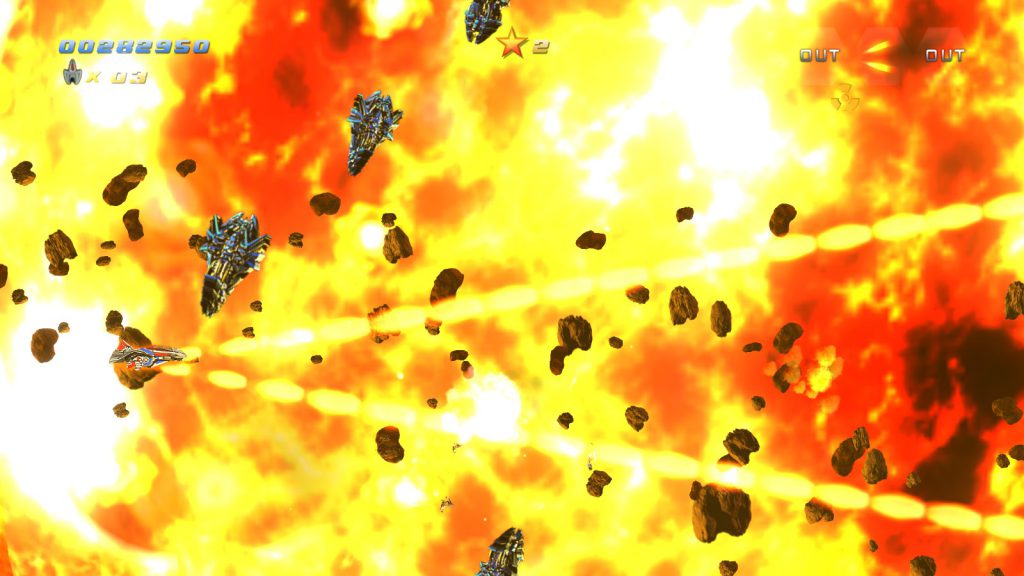 The art style is detailed. Lots of intricate pieces with both 3D and 2D surfaces, background, foreground and objects to spare. There is also a nice variety of environments inspired by horrific water monsters as well as biomechanical art that also fit the thump of the Euro club music that I won’t mention any more. 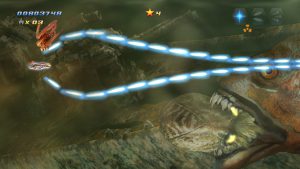 The boss designs are also quite eclectic with mechas, a kind of evil octopus head, and a praying mantis with tubes running out of it. I guess what I’m saying is that focal point of the visual style here is to inspire that one edgy middle school kid to not actually read Lovecraft but still constantly insert it in every scenario he can. As much as admire the intricacy and variety of the design it was a bit cluttered and incoherent for my tastes, and the inconsistencies of what counted as something that could hit your ship was annoying for how busy the screen was with pulsating fish or giant vacuums. 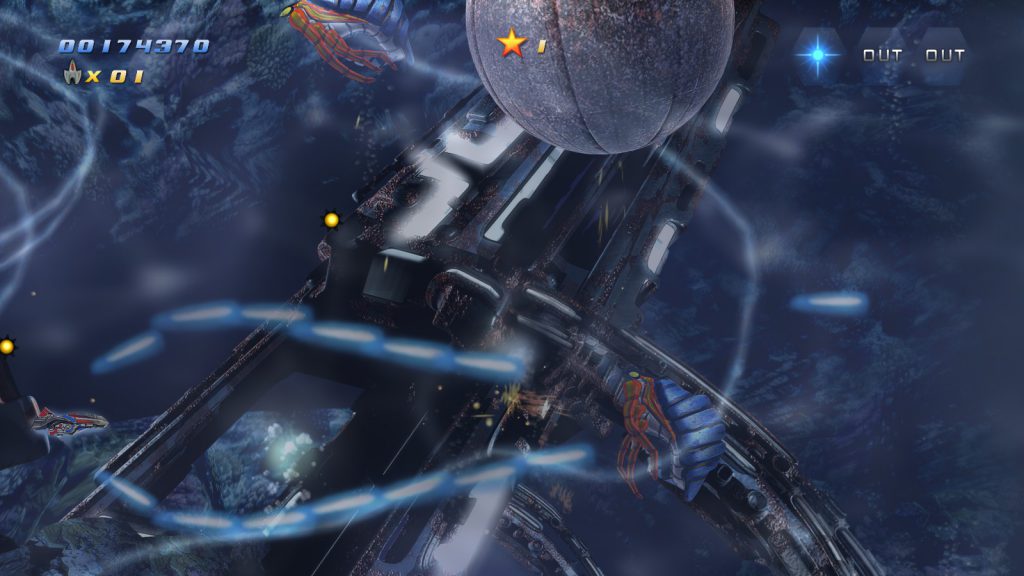 Sturmwind keeps players on their toes and constantly occupied with dizzying puzzles and projectiles. Questionable hitboxes are a pretty stock complaint for any shoot ‘em up, outside of that it would be nice to have more content in the game. The difference between difficulties in mission modes comes down to the amount of things on screen and arcade mode challenges players to go through the entire game without retries. Outside of this, it would have been nice to have leaderboards at the very least, but co-op, a proper training mode or art gallery unlockables are also not uncommon with current shoot ‘em up releases. Still, this is a solid entry into the genre even if parts of it feel dated.

If you’re interested in playing Sturmwind EX you may be in luck! Ask JimDeadlock on our Discord server and he may have a free key for you, if you’re quick!