Another year, another array of creative games to play with your friends!

Jackbox Party Pack is always one of those games you either get your money’s worth with some buddies or, if you don’t have anyone to play with, plain and simple don’t even think of buying. Veterans of Jackbox will be glad to hear that this pack is quite good, probably having both the highest and the lowest of the series as a whole, in my opinion. Despite this fact, don’t let it stop you from buying it, there is enough excellence here to make it worth a buy and play with your friends until Jackbox Party Pack 7 inevitably gets released. This review will be a bit different as I’ll review each minigame individually and give a final conclusion as there isn’t much else to discuss about gameplay/story or graphics (only artstyle, honestly, which is the lovable cartoony style we know and love which varies from game to game, giving each minigame the uniqueness it deserves).

Given a word, you must all create a definition that gets voted by everyone else. The one with more votes is selected and you must then pick a synonym (that also gets voted) and an example sentence using the new most-voted synonym – the winning sentence gets picked and the top definition, synonym and sentence are all joined into a final Dictionarium entry for the originally given word. 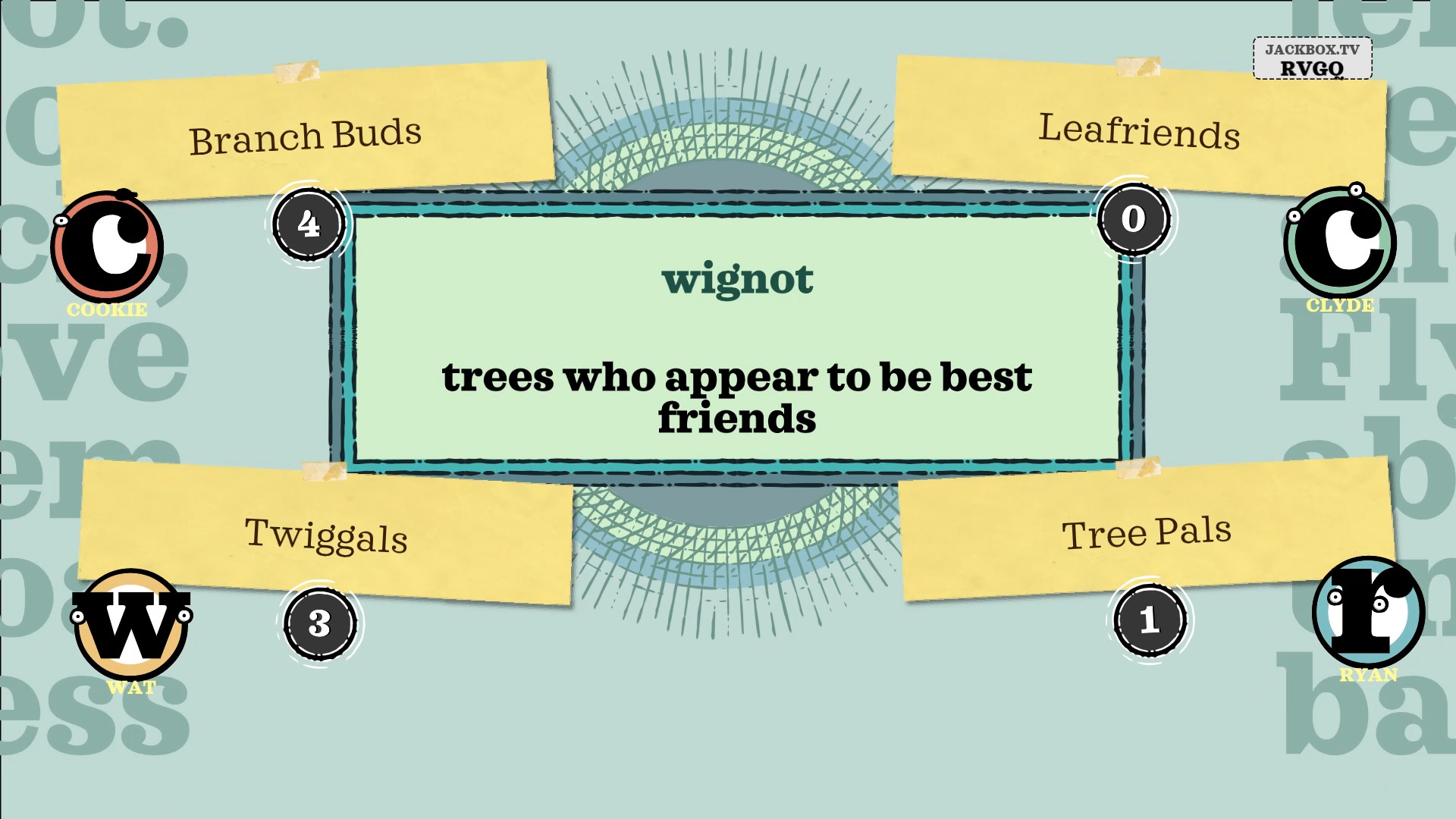 Sadly, very big hit or miss. It wasn’t as fun the first time around but I must admit seeing everyone dropping sex puns to define “hero cream” was quite hilarious but it really depends on both your sense of humor, creativity to make a definition for a random word/pair of words that ideally should be good to re-define or make good puns about – if all these stars align then sure, Dictionarium is a pretty great minigame but it shouldn’t be fun only with a few “if’s” attached to it and for that reason, it’s not a reason to buy this pack, more of an extra if anything that I wouldn’t bother much with.

However, there’s a record (a Dictionarium, if you will) with all the new definitions, words and example sentences you made with your friends that is well organized and can give a great chuckle at the good ones you made. Hats off to the developers for including such a neat feature.

As “comedians”, you’re tasked with writing punchlines for given sentences based on other player’s given words. Most voted jokes give more points and by the end, a winner is picked.

The cutscenes are funnier than the minigame itself. Sadly Joke Boat, while taking great ideas and inspirations from Jackbox Party Pack 5’s “Patently Stupid”, writing a joke where you can only complete a half-sentence with the final punchline renders the minigame quite weak overall. Most of our jokes were just not funny because of how the game in itself restricts your joke creation. 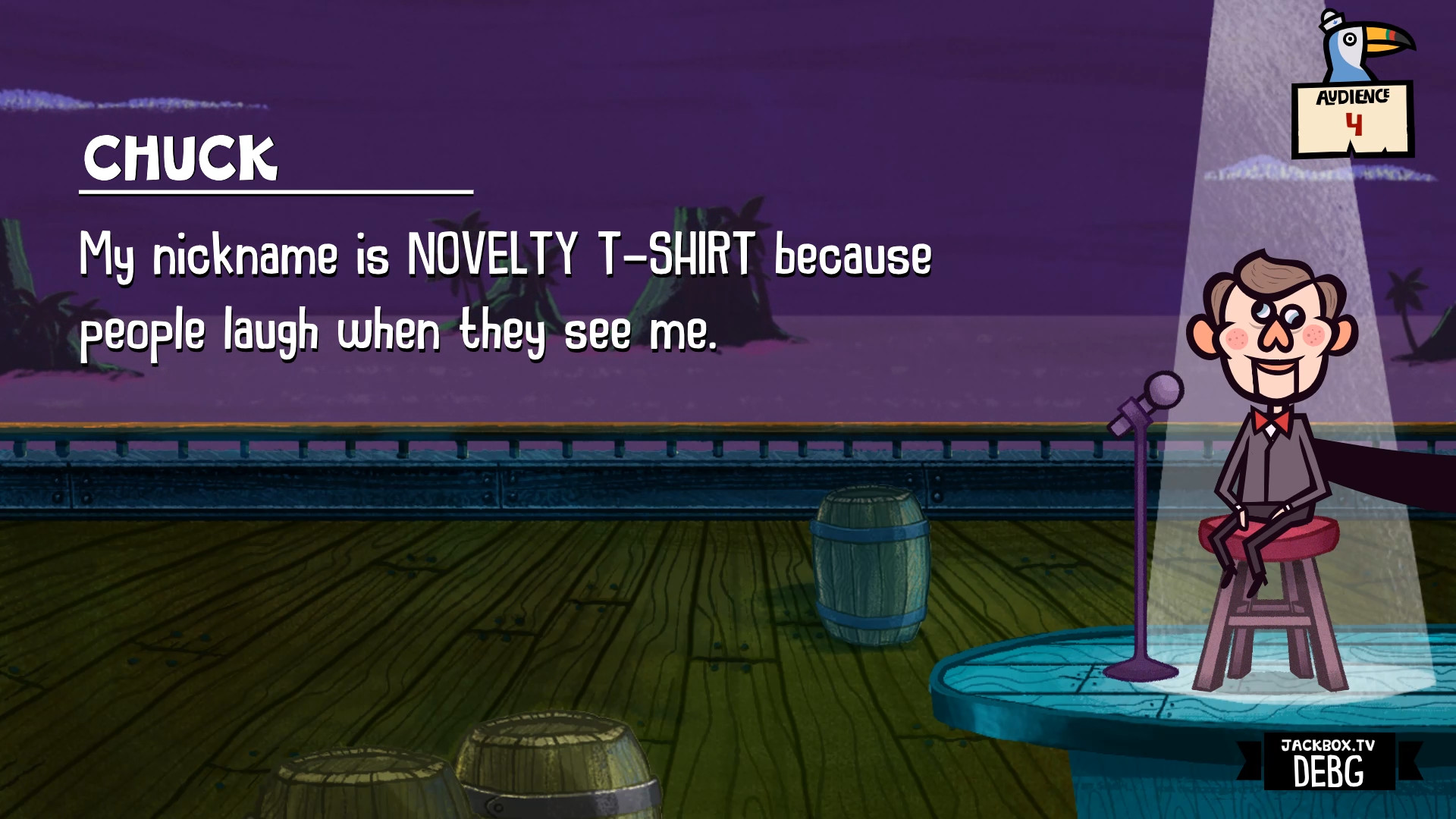 The idea is great but taking other people’s words or sentences, adapting them to your own punchline is restrictive and forces you to adapt to the initial sentence – it just isn’t fun to play. We ended up laughing more at how unfunny everything was rather than at the jokes themselves.

Much like Disctionarium, Joke Boat seems very dependent on how lucky you get with the sentences given, and we weren’t very lucky with it overall and thus, I found Dictionarium more fun than Joke Boat, ironically. It’s worth noting that the cutscenes this minigame has are pretty great and funny, adding to the irony of it. I’d also skip this one unless you have a friend with really great comedic potential/timing, otherwise you’ll just cringe most of the time.

One of the best and worst minigames of the pack. Given a picked theme, you’ll use terms/words from that theme (could be characters from “Friends”, birthday party themes, career paths, you name it) to describe each of your friends, in an attempt to describe them without actually using any adjectives. The concept is great, to see how well you know them (if friendships don’t get broken by the end, of course) but the themes given are sadly limited and unless you know… everything, you’re screwed. 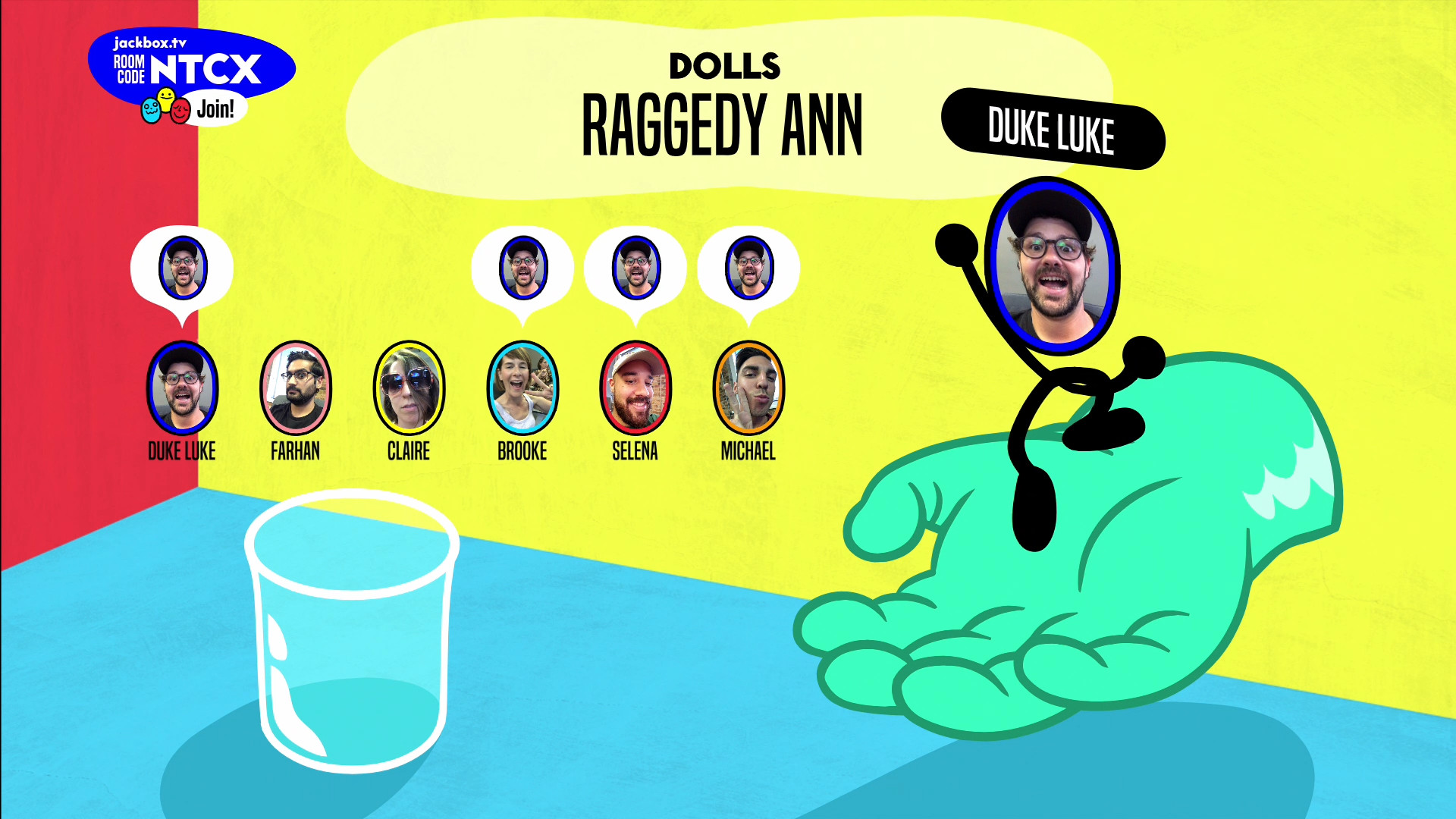 Sometimes we got some arrays of themes we knew nothing about so we ended up picking random things for eachother and just laughed as some people were voted the same choices and so on. It was funny, yeah… but not the way the game intended and that’s a massive criticism I again must point out: alot of luck and knowledge in the categories given are a must that not all your friends may have, rendering some rounds really fun and another rounds… not so much.

While not the best of the pack, it’s one of the best of the entire series! TMP2 (to abbreviate) is a series of questions thrown at the players – those who get it right are safe, the ones who get it wrong enter a random minigame where losing against the other players who missed the question renders them dead. By dying, they will be behind in the final race showdown, where some rapidfire questions are thrown and the one with most points wins. 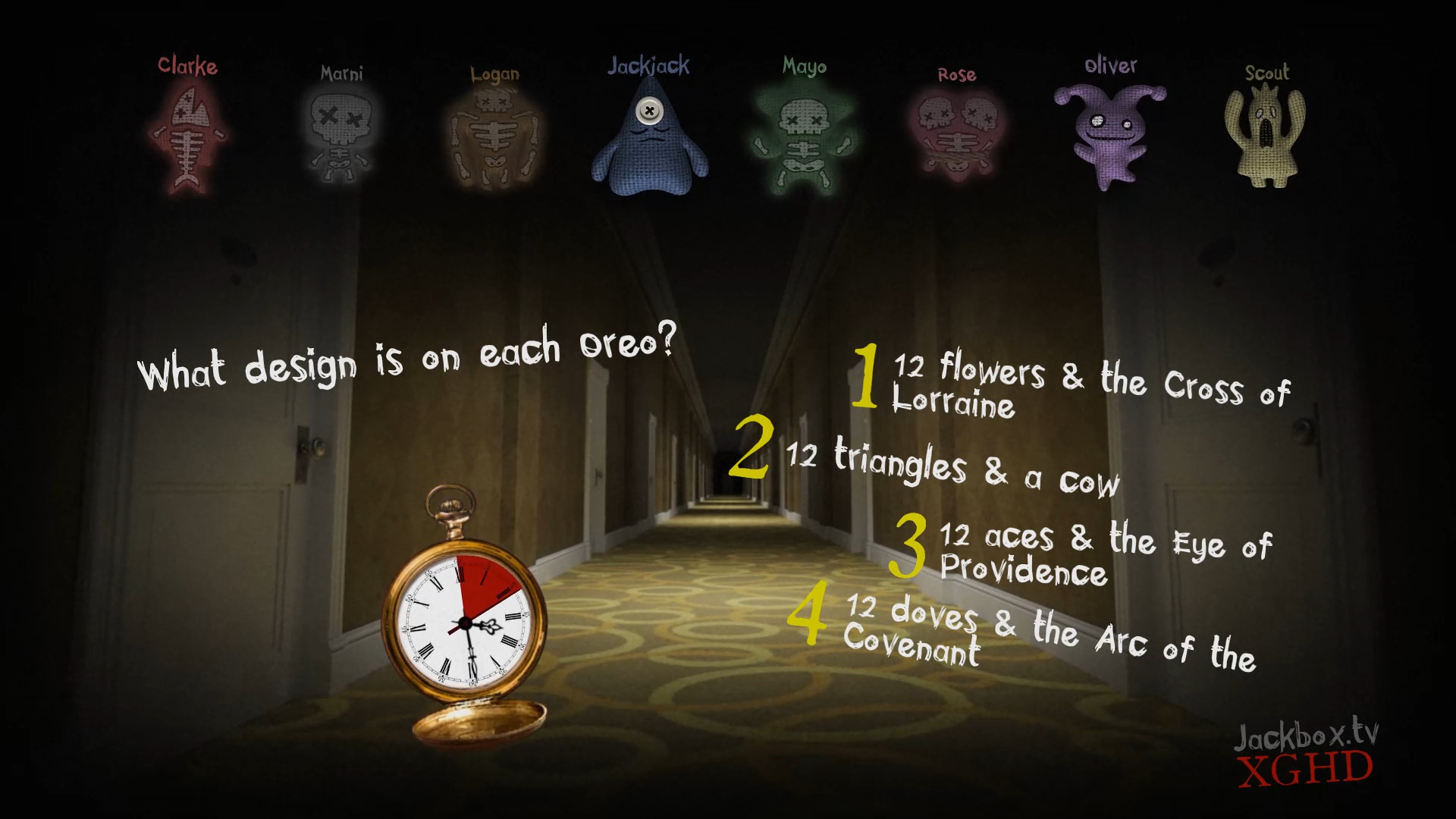 It’s exactly like the original TMP everyone knows and loves with a few extra gimmicks – many more games are added and they are all REALLY DAMN FUN! I can’t count how many times we all just overreacted when a new minigame occured and it sounded hard for the poor players who had to go through them.

The final race also has an added feature where to reach the end and win, the player must answer the “passing question” with all options correct, which the original lacked: this adds a fantastic new layer of tension as being ahead means very little as the guy in 4th trailing or so can just jump in, nail every option in a question and win the match out of nowhere (yes, it happened while I was at the top and it was as hilariously annoying as you can imagine).

Here’s your reason to throw 25 bucks at your screen. Probably my favorite minigame of the Jackbox games combined, Push the Button is a unique version of games like Mafia (the card game) or Town of Salem where 2 of you are aliens disguised as humans and the rest are humans on a spaceship. 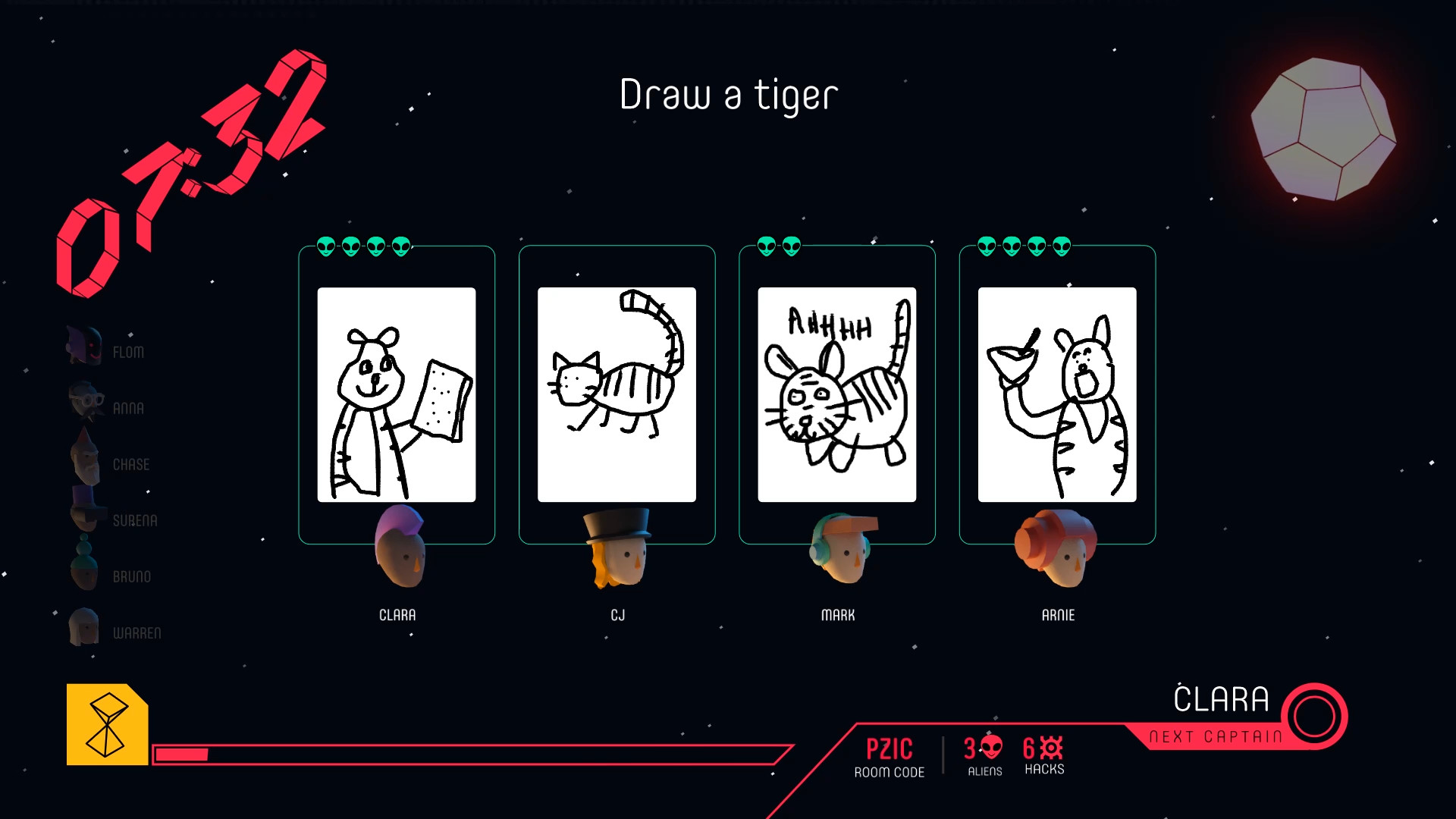 Every round consists of doing tests (drawing something, answering some questions, doing a puzzle) where the alien’s requested question/puzzle/drawing is slightly different from the human’s so that you can all review the final result of each test and try to discover who the aliens are.
Aliens can, however, lie and even hack humans to get wrong prompts or hack the other alien so he answers correctly to the human prompt in order to reduce suspicion. By the end, once the aliens are surely detected, you can then

(seriously, it’s awesome when the announcer says it at the beginning)

Anyway, pushing the button leads you to a room in the spaceship where you can put any 2 people there, vote to confirm and if the vote passes, drop those 2 picked characters into space to die. If both are aliens, humans win, otherwise (1 or 2 aliens are still in the ship), aliens win.

I absolutely love this minigame as it involves talking, manipulation and deception and it’s just a blast from start to finish.

With 2 of the best minigames ever made in the Jackbox series, Party Pack 6 is a must-buy for fans of the saga. Newcoming players would probably find better value in other packs such as 3 or 4 with a bigger discount. This one, however, is worth risking the full price of 25€ as Push the Button and Trivia Murder Party 2 carry it easily.

A solid recommendation overall. A blast with friends (or even randoms if you manage to get enough of them).