Too cute to say no.

Sometimes, you just need a happy, feel good game in between other games with dark themes or when going through tough times. Often, the go to are are simulation games like Animal Crossing or Stardew Valley to distract their mind as you do various tasks around your town or build up your farm. For others that can’t get into those types of games, there are a plethora of games in various genres (like rhythm or rpgs) that will boost someone’s mood. It all just depends on the person. Songbird Symphony aims to fit right in as it’s cute, heartwarming story tries to bring a smile on the player’s face. 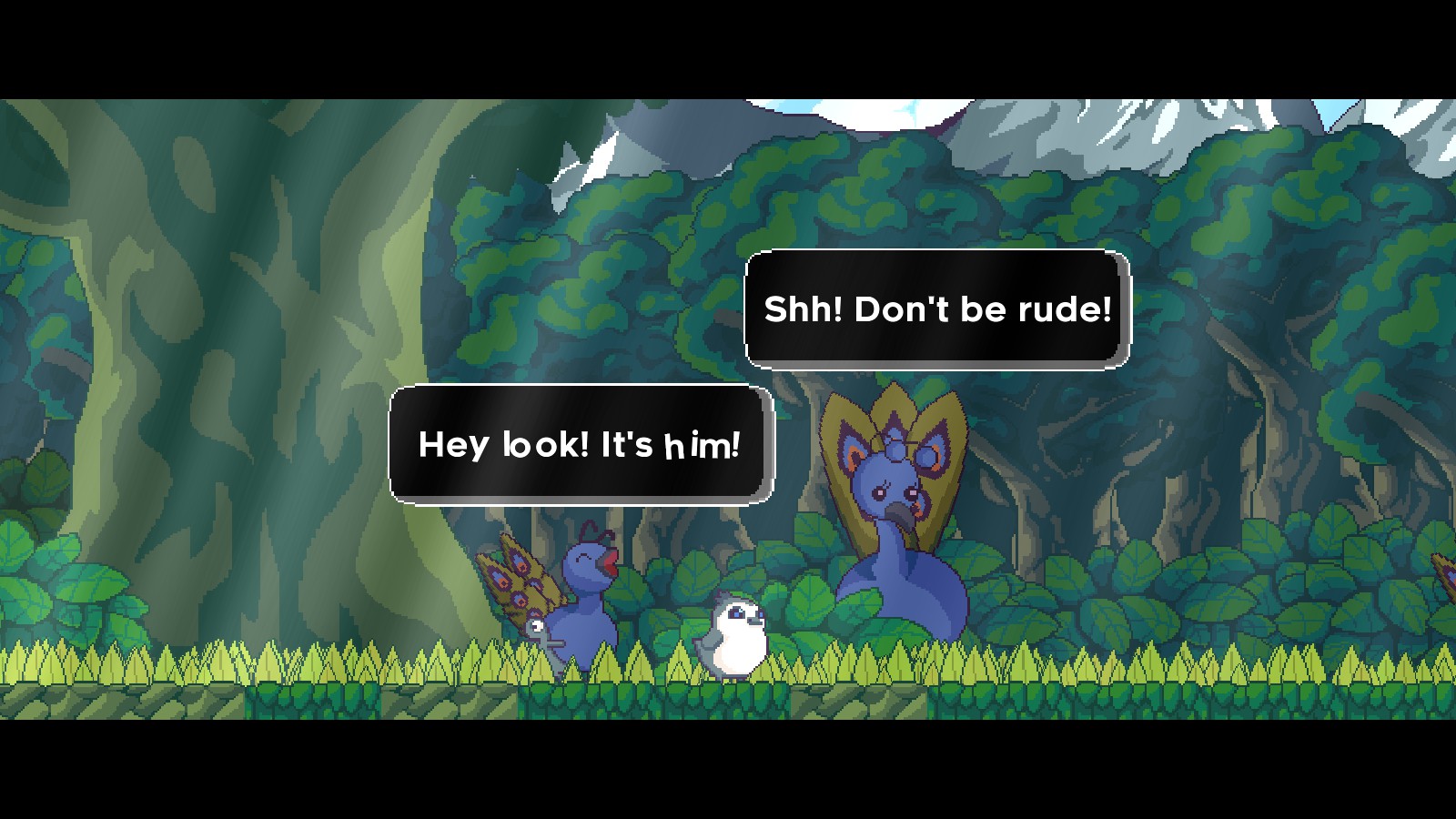 In Songbird Symphony, you play a cute baby bird named Birb. Birb’s first memory was hearing a song while he was still in his egg and then, once he hatched, a worried bluebird hovering over him. It turns out that Birb was actually adopted and raised by a peacock by the name of Uncle Pea. One day, after Birb wakes up with no Uncle Pea to say good morning to, the community of peacocks he lives in makes it even clearer that he isn’t like them. The other kids don’t even look like him, not even close, and don’t hold back on pointing out how weird he looks to them. Even some of the adults wonder why Uncle Pea took him in. After Uncle Pea avoids Birb’s question on whether or not he’ll look like Uncle Pea when he grows up, Birb sneaks away. Curiosity gripping him, Birb travels to the smartest bird he knows, the Owl. Owl agrees to help, but it isn’t going to be as easy as Birb thought. After finding out that Birb can easily learn notes from other bird species, Owl sends him out to gather the other four. Once Birb learns them all, Owl will be able to find out who his parents are. However, some birds might try to stop Birb from visiting Owl. 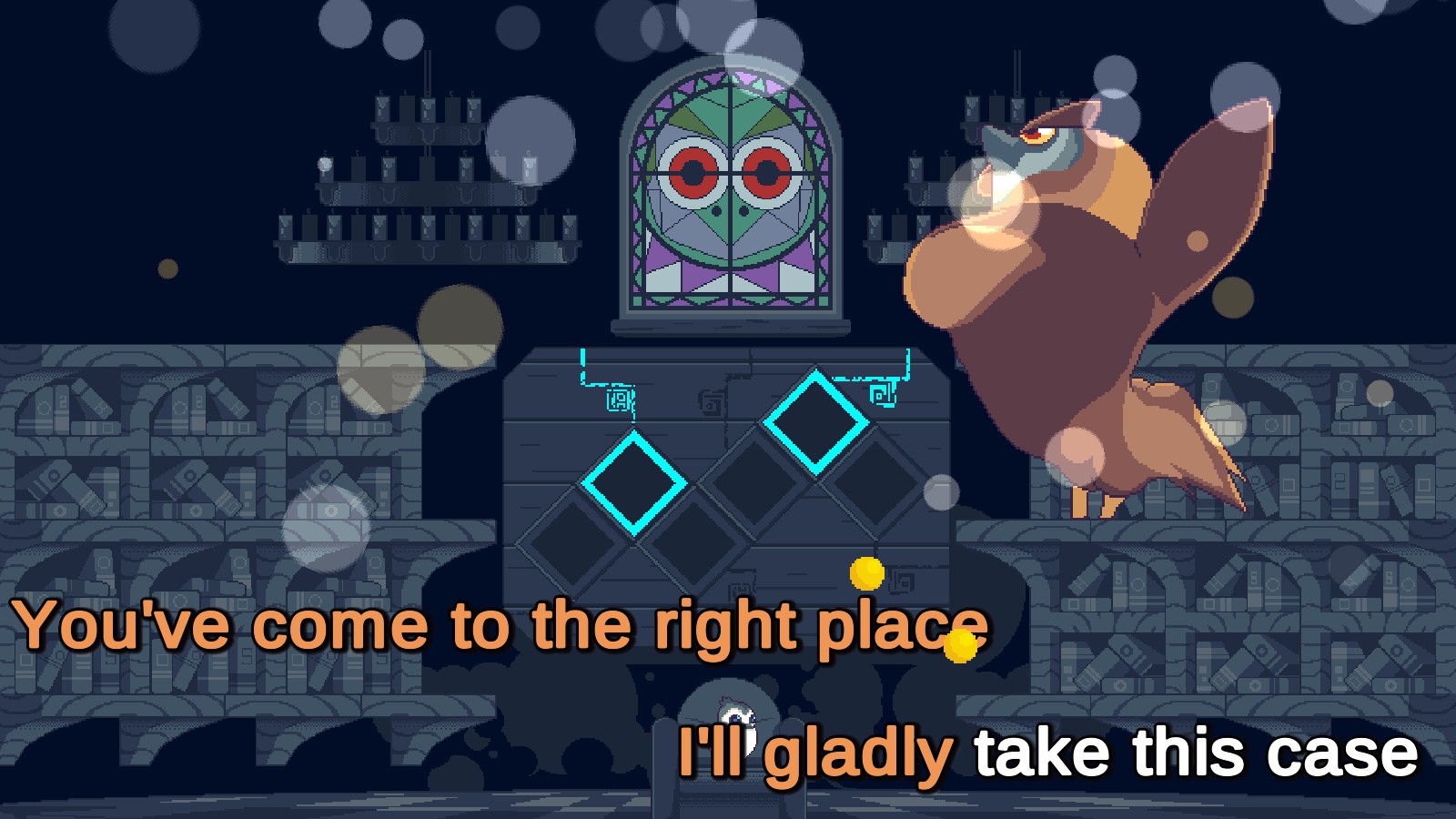 And thus, Birb’s adventure starts! To gather all the music notes, you’ll travel through various areas to meet up with other bird species. This brings in the platforming part as you can explore each area and complete tasks so you can get a song with the bird that has the note you need as you travel through pipes or platform through a castle. Even though you may not be in a rhythm section, it doesn’t mean you can’t sing. The platforms, in particular, require you to sing a tune alongside it to activate it. There are puzzles here as well, but all of them are easy enough with some requiring some time to figure out. You really just have to figure out how to push all the boxes in the right place so you can destroy compacted dirt or cover a hole so you can push a quest item to the needed area. You’ll also meet a lot of birds, which you need to sing to start the conversation. 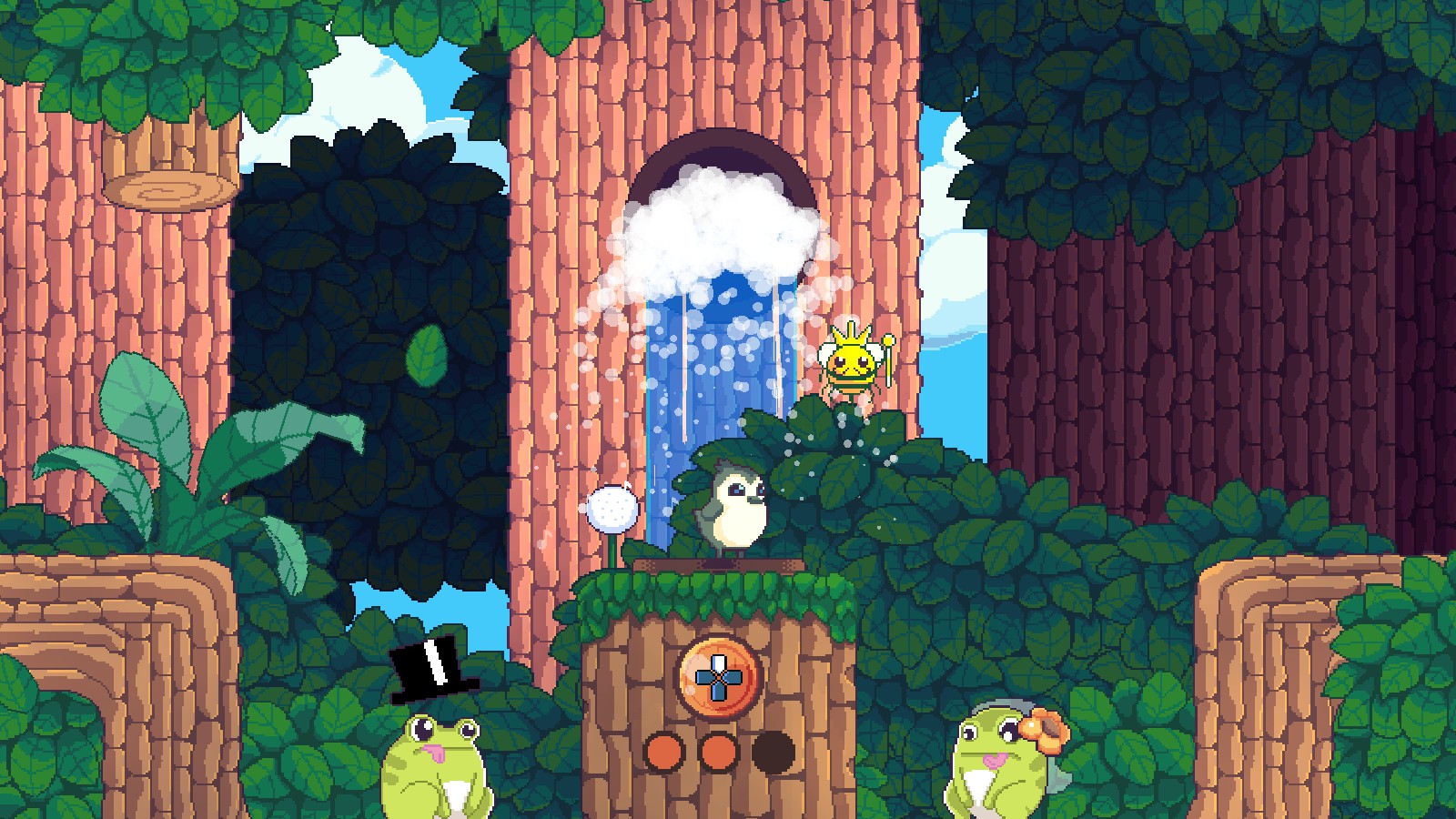 There are two collectibles you can find in every area. First, there are world notes. Some world notes are rewarded through story-related events, but the vast majority are from exploration. As you’re exploring each area, you’ll come across other animals that might need help, use other things to create notes, or just do something fun. You’ll go between helping a mother gather her babies to gliding through targets some fireflies made. Although, it may not be wise to ignore the world notes as there are a few doors that require you to have a certain amount of world notes. If you gather all the world notes, there’s also a secret room that contains the developers chilling out. You can also find feathers, but it takes more than just finding these sneaky things. You also have to find the bird that owns that feather and most of the owners are hidden away. Once you do, you’ll get a little excerpt in Birb’s journal. Luckily, some feathers belong to birds that you’ll sing with, so those will automatically be filled in. 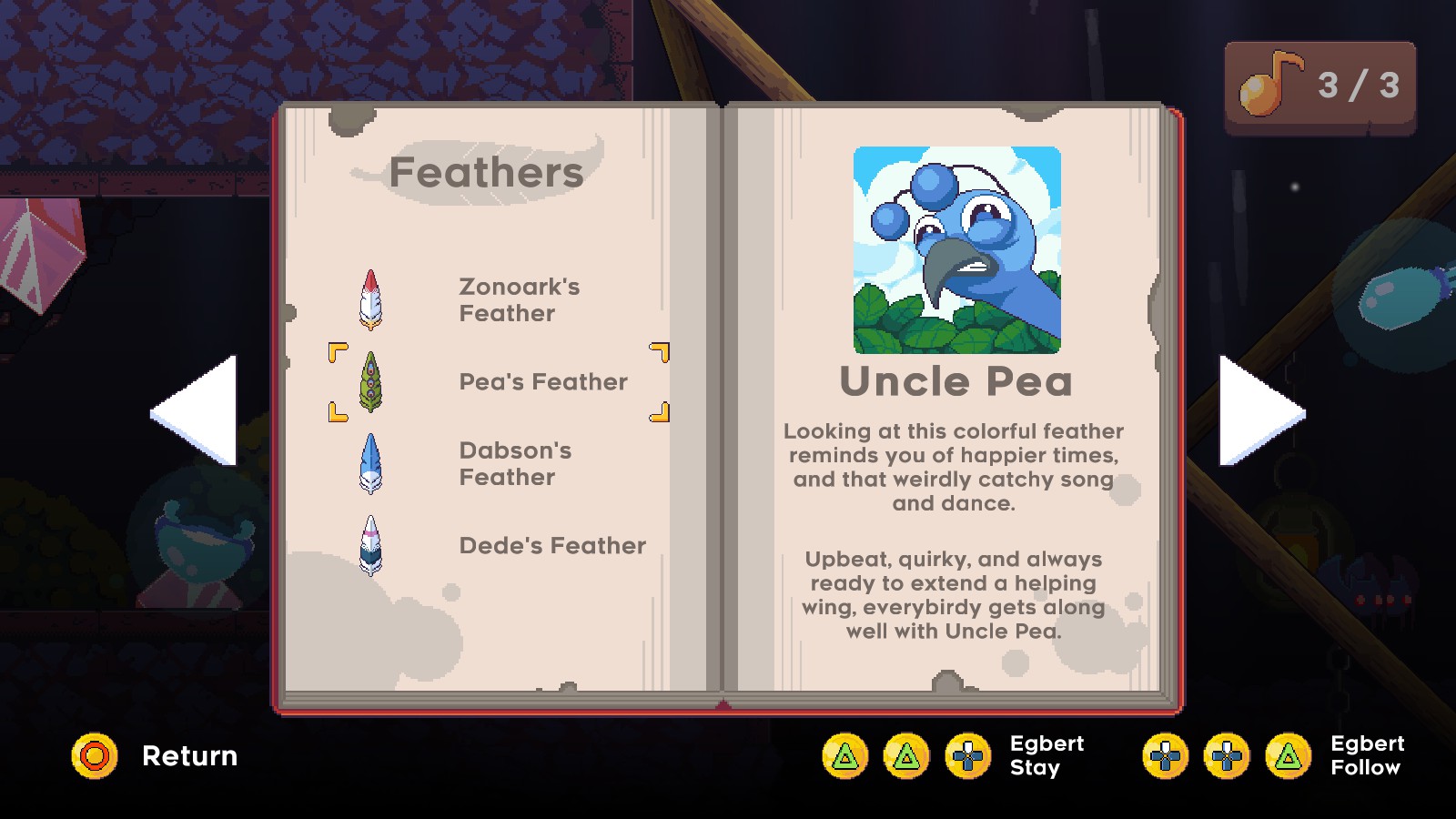 Every area will have at least one rhythm section where you mimic the other bird’s notes. Some areas will have you sing with another bird first so you won’t go long without getting some rhythm action in. During these sequences, the bird will also sing their song, which all of them are charming. While the songs are sung with tones, only having a vague hint on what it would be like with actual voices, each one fits the character from the lyrics to the rhythm they sing at. 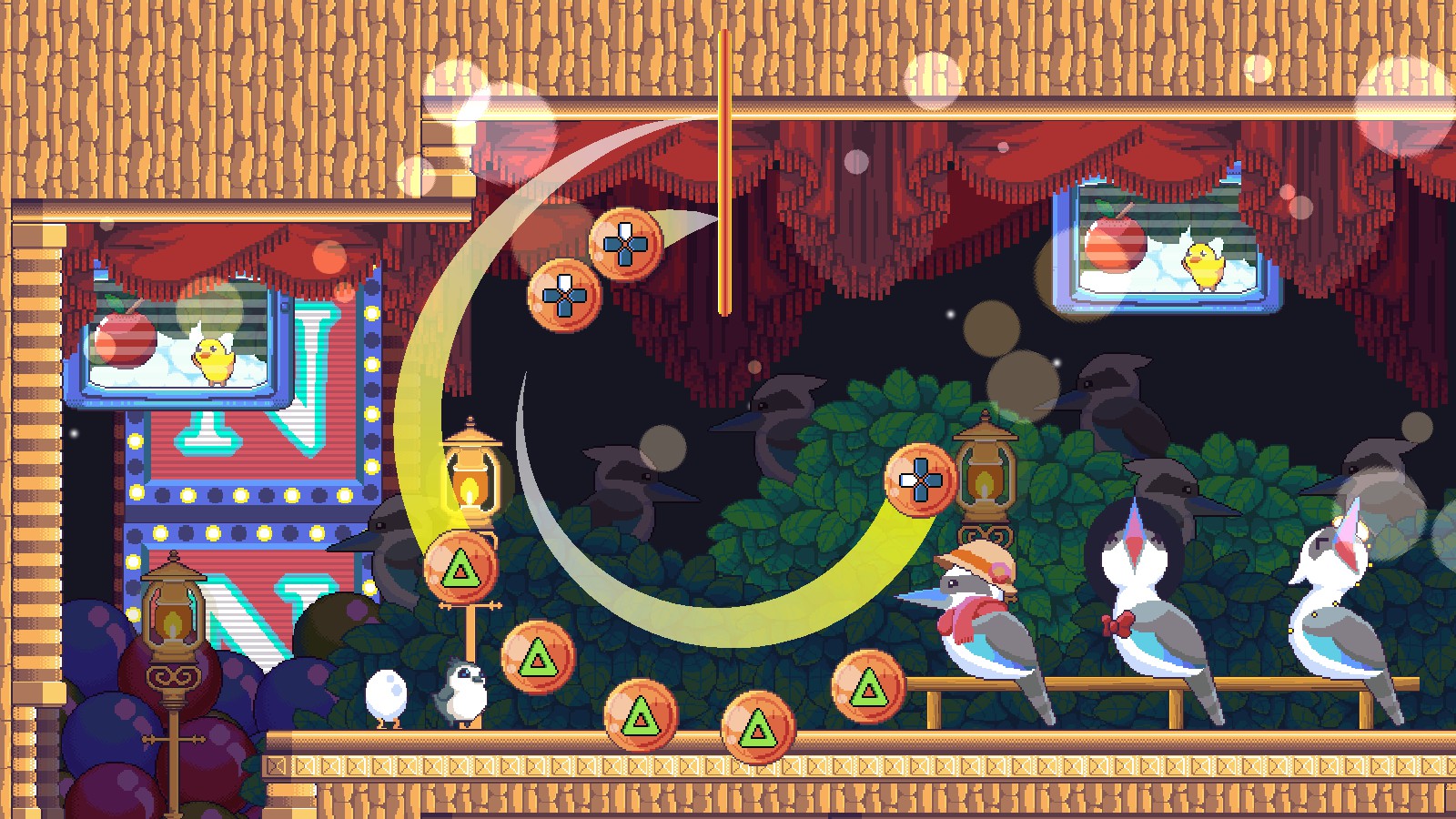 Each main song brings along a new rhythm design. You’ll first start with a design akin to sing-alongs and soon encounter new ones like one where the buttons are thrown up in the air before falling down. Though, the songs in-between these uses a combination of all the ones you encountered so far. While it does keep things fresh, it will also make some sections difficult for some players. Personally, I had little problems with designs that are the classic “hit the button when it hits the zone”, but I did have difficulty on the one that had notes fading in and out and one that was like Simon Says. The final song also is a jump in difficulty as the speed is upped and has every design and note you encountered, but don’t worry too much. If you’ll have trouble with certain rhythm designs, or just bad at rhythm games in general, Songbird Symphony won’t lock you out of the story. No matter what score you ended up getting, you’ll be able to continue the story or replay the song if you liked. There’s not even an achievement that requires you to get a certain score on every song (thank goodness). 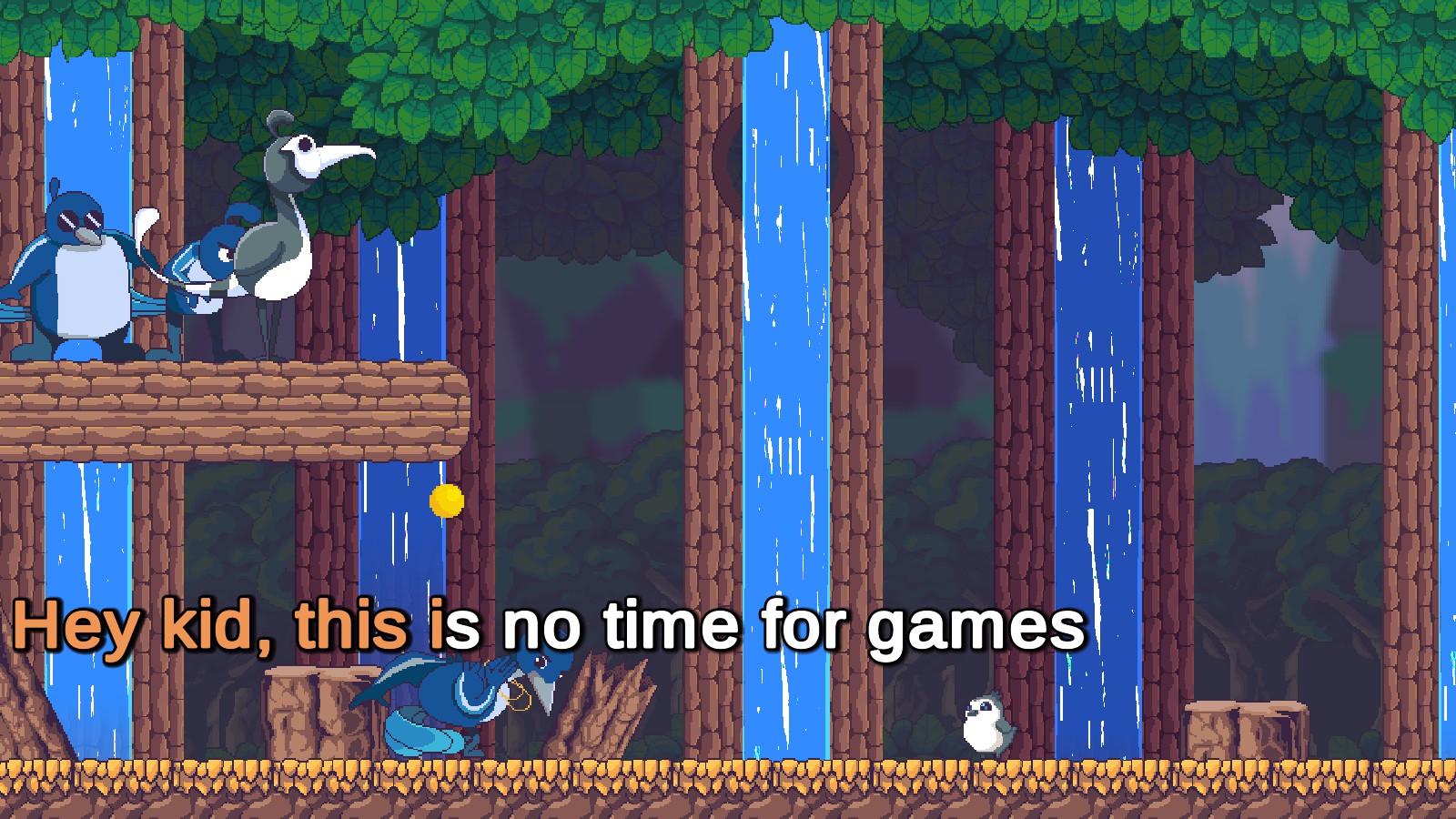 Songbird Symphony is a delightfully wholesome and cute rhythm platformer about acceptance and belonging. While the story beats are pretty easy to figure out, it reminded me of last year’s Wandersong, which is a good thing. In addition, there’s nothing going against Songbird Symphony other than the missed note sound being slightly annoying and being too easy for those who will be looking for a challenge. If you’re looking for a game to wind down, this will be just your thing.