Clearly paying homage to the tactical RPGs of yesteryear, Himeko Sutori borrows much from past entries in the genre but also introduces a number of systems to create its own unique experience.

A modern take on the classic tactical RPG genre, Himeko Sutori throws you into the role of three noble sisters who find themselves in the midst of a life-changing catastrophe. With the aid of a few old friends and a number of new allies, you’ll battle a variety of foes that will test the might of your rapidly growing and customized army as you fight to restore the rightful order to the realm.

As a huge fan of the tactical RPG classics, the concept of this game intrigued me immediately upon seeing it. From an early age I found myself enthralled by the likes of Tactics Ogre, Ogre Battle, Brigandine, and X-Com: UFO Defense and that interest hasn’t waned in the slightest as the genre has evolved and given us entries such as Divinity: Original Sin and the XCOMs of this decade. Himeko Sutori revisits the classics and brings a new title to chase our nostalgia while adding several more modern aspects that make it familiar without being a simple clone.

The features of Himeko Sutori that stand out the most are almost entirely based on the systems that allow you to customize the ever-swelling ranks of your army. Every character is composed of a large collection of stats and must be assigned to a lance to partake in combat, the first unit to be assigned is its captain. This aspect of the organization of your army reminds me of Ogre Battle and it’s great to see it revived and utilized in this way.

Character progression overall is done in a slightly different way than we’ve seen in the past. Stats are placed into one of three columns on a character’s sheet, some of them are familiar but they fit together in a way that is an interesting twist on the formula. For the sake of describing them, I’ll refer to these categories as classic, color, and talent stats. Classic stats are easy enough to recognize as we’ve seen them many times before such as strength, intellect, and charisma. Color stats are a bit of a twist as one of them is considered the primary stat for class abilities and improves the efficiency of the class that it is tied to. A good example of this is the blue stat that boosts the leadership and damage potential of knights and mages which is opposed by the red stat that does the same for berserkers and warlocks. Finally, talent stats include those like blades, for improving damage with swords and daggers, and healing, which you may have guess increases healing capabilities for all healer classes. 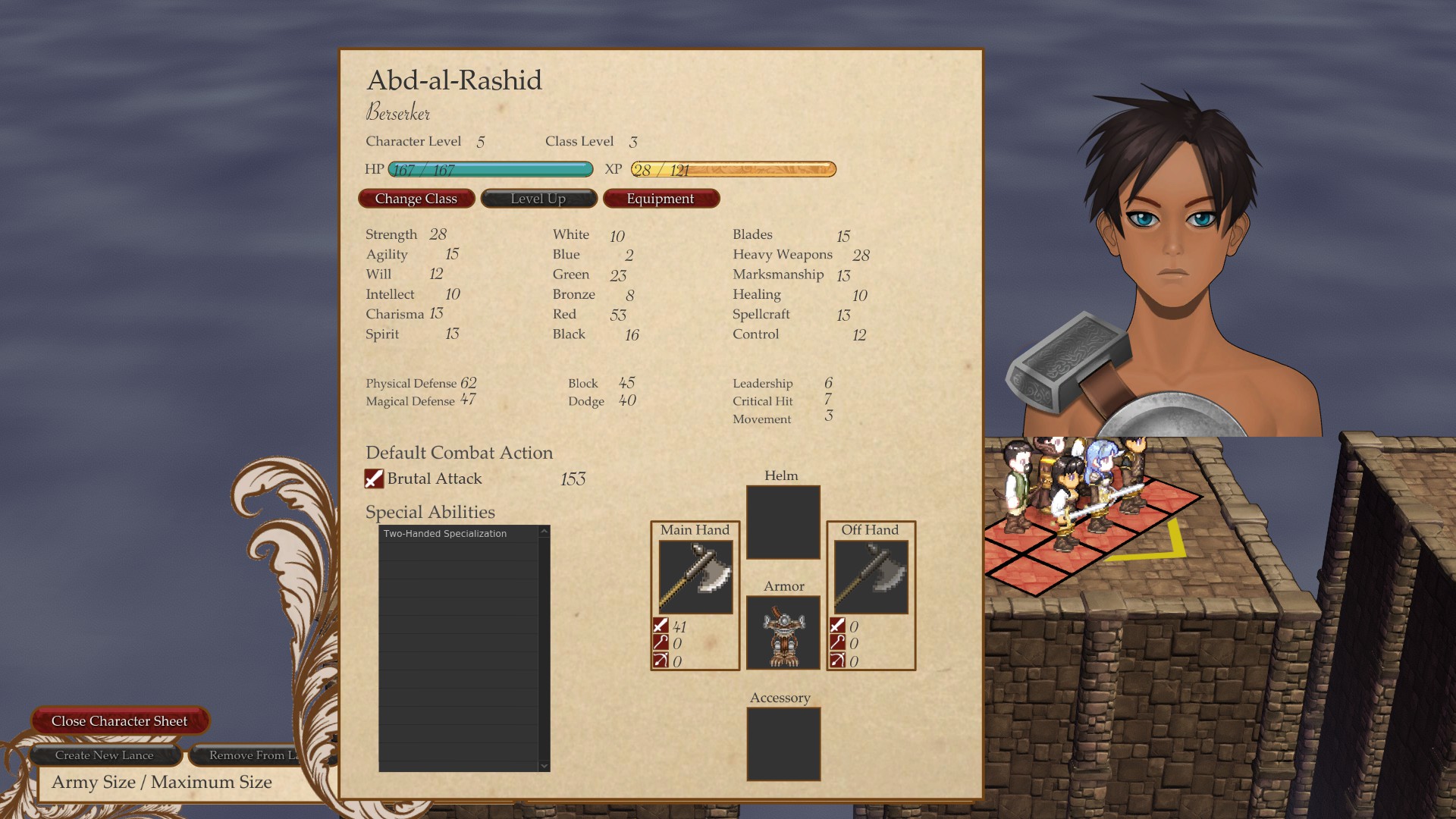 Upon gaining enough experience to gain a level, a character will gain a predetermined amount of these stats based upon their class though you’ll also choose one of three cards from that class’ deck to further enhance the character. These cards can be anything from an addition sizeable boost to one of the previously mentioned stats, reaction moves that take place when the character’s lance is attacked, leadership abilities that boost the efficiency of a specific kind of unit if this character is the leader, and so forth. Classes are also unlocked via the card system and you can unlock any class relatively quickly, though it is interesting to see that there are pros and cons to flying through the class tree to a third-tier class. Classes that are of a higher tier tend to be more specialized and are capable of equipping better gear, though if you spend some time in the first or second-tier classes you’ll level more frequently. I found that your characters can be efficient whether you push straight for the third tier or if you attempt to master each class along the way, though skills that you gain through the level up cards can be carried from one class to the next which can be quite a boon once you’ve started to achieve an understanding of the system.

Speaking of classes, you’ll find that there twenty classes across three tiers that keep you tweaking your army and I’ve found that I enjoy all of them. Each has a primary ability that is triggered when their unit is activated, such as a ranger firing their bow or a warlock conjuring a pillar of flame, and every one of these has a trio of stats that are picked, one from each category, to determine its power. For example, an illusionist’s capability to hinder their foes is determined by a combination of its charisma, black, and control stats as well as a significant boost from whatever items you have equipped at the time. 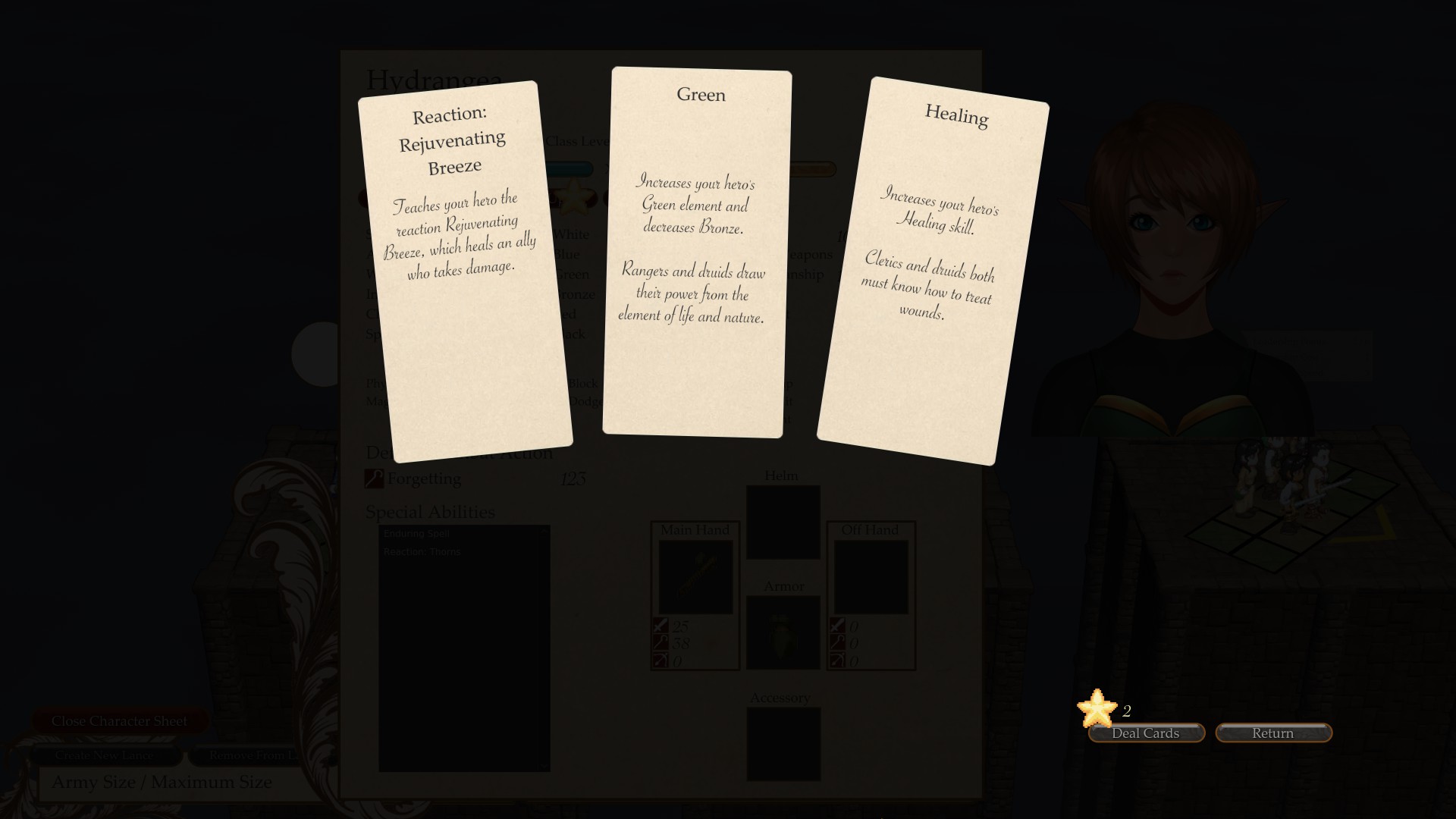 Now That You’re Organized, To Battle!

Battles are turn-based on a grid and are a double-edged sword for your army. It is in these that you gain the experience that leads to the improvement and customization of your units but it is also here that you face the most feared foe of them all: permadeath. You’ll want to be effective but also particularly cautious in your strategies or you’ll end up watching your personalized and unique army slowly erode into nothing as you suffer permanent losses at the hands of your enemies. Fortunately, combat is easy enough that veterans of the genre will pick it up almost instantly but complex enough that you can secure victory through a number of maneuvers. 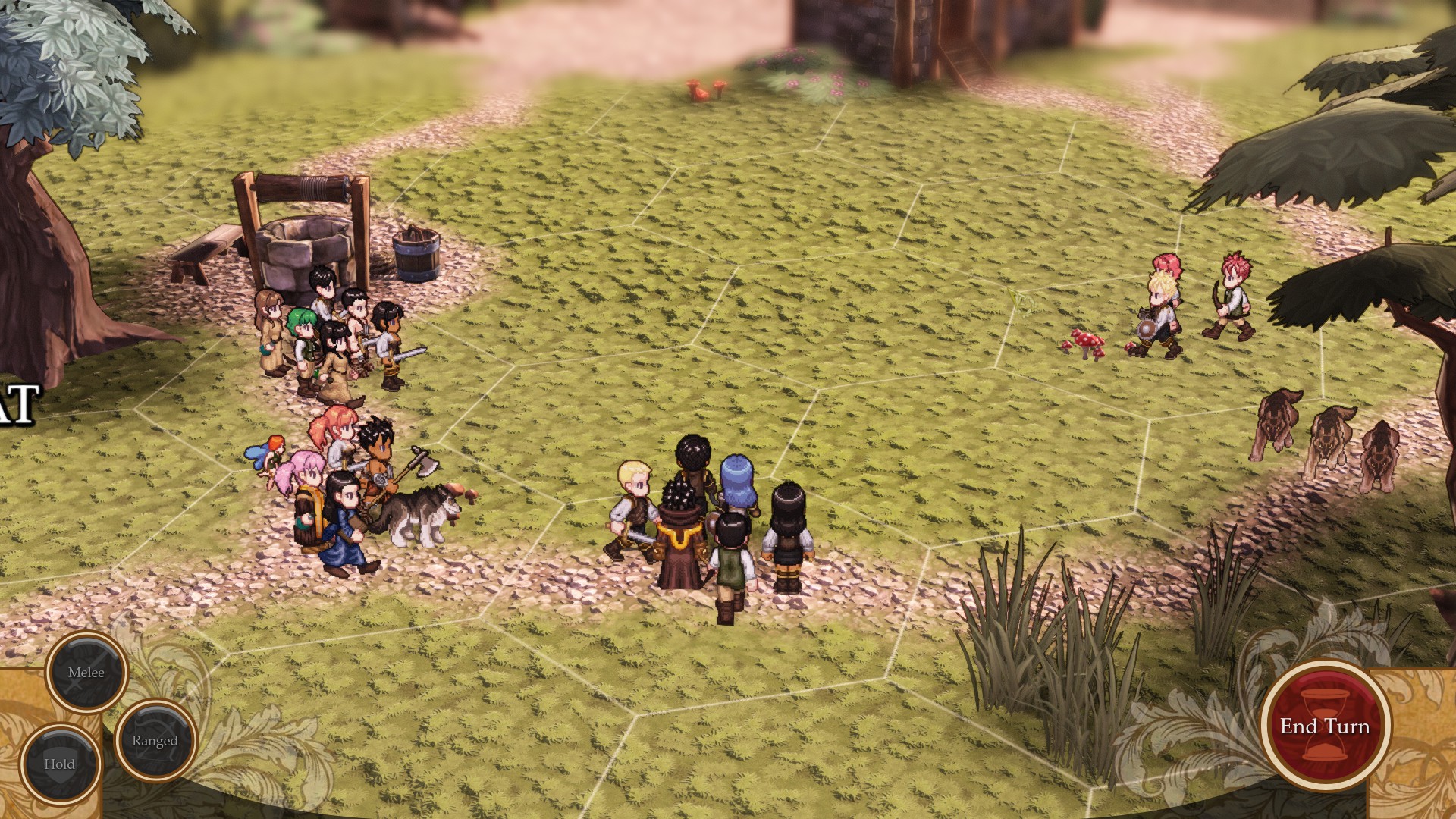 Unit positioning is extraordinarily important here as each lance has a number of spaces that you can assign your characters to (again, think Ogre Battle) and their position means life or death for them when push comes to shove. When a unit attacks another, every member of each unit that still has their action left will attack whichever enemy is the most convenient for them to reach unless they have a unique ability that aims for a specific target (nasty rogues). This means that if one unit flanks and attacks another that is exposed, the cleric and alchemist sitting in the back will receive most of the attacks from half a dozen knights, berserkers, gunners, and so forth, and will be utterly demolished. Goodbye, squishies, we hardly knew ye. 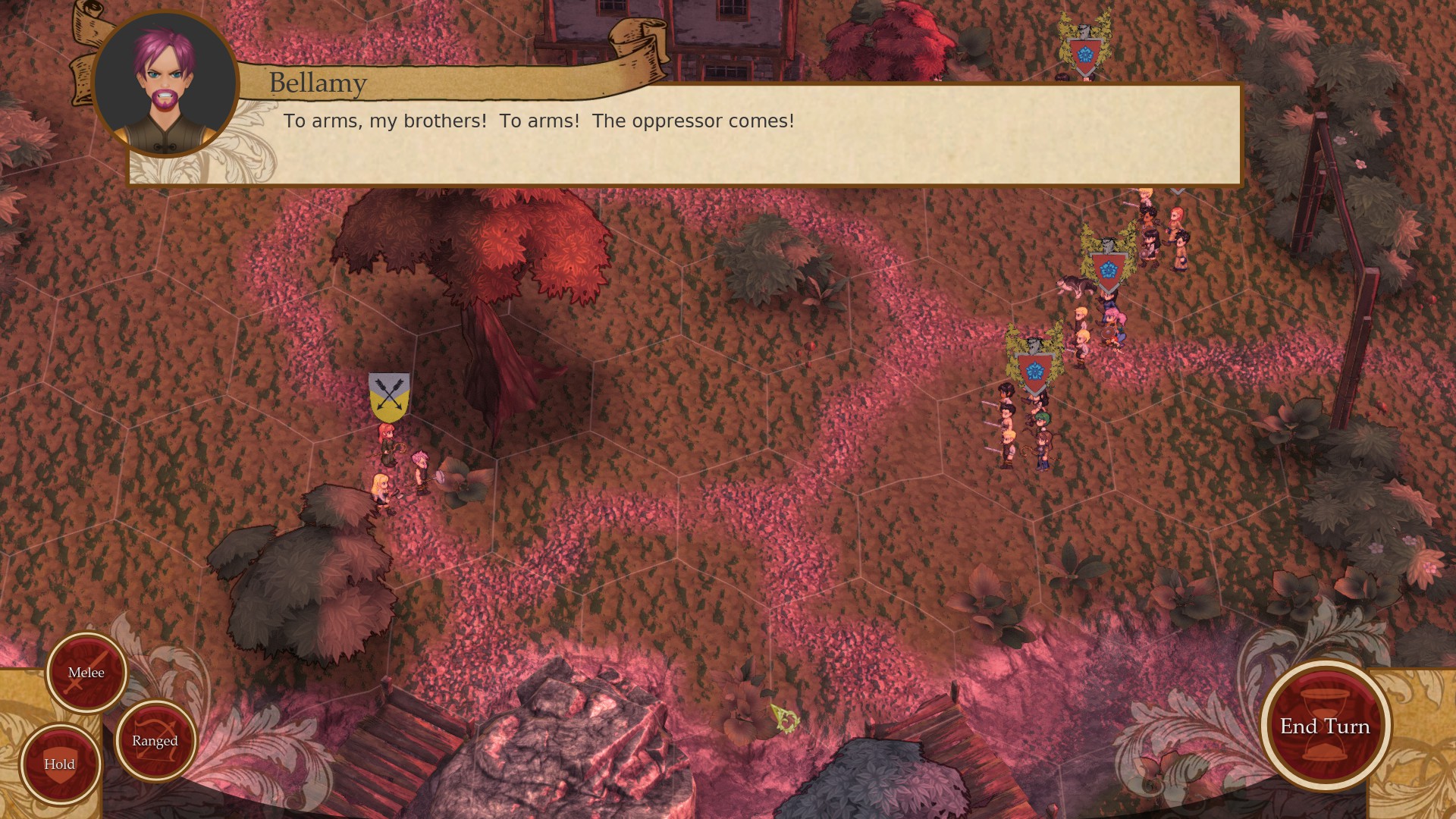 The World That You’re Fighting For

The setting and atmosphere of Himeko Sutori are interesting enough but it’s clear that the focus of the game is army management and combat. The story has its own flavor added to the old formula but fans of RPGs will find it very familiar all the same. I didn’t find this to be much of an issue as the mechanics were the draw for me and I felt myself feeling somewhat similar to my time with Disgaea, having a blast but not being overly immersed in the tale that was being told. The music was fitting and didn’t interfere with the experience but I didn’t find it to be anything particularly special. I did enjoy the day and night system and the developer earned a nod from me when I noticed that different characters can be interacted with depending on the time of day, a touch that certainly isn’t new to RPGs but one that was a welcome addition. As for the game’s graphics, the sprites do their part and I have no issues with them but the character portraits are definitely one of the low points for me. It’s clear that the portraits of every character, whether a main character or a randomly generated recruit, are pieced together from a simple and low-quality generator that results in everyone looking very similar to one another. I would go as far as to say that these portraits were unimpressive and hurt the overall atmosphere of an otherwise very enjoyable game. 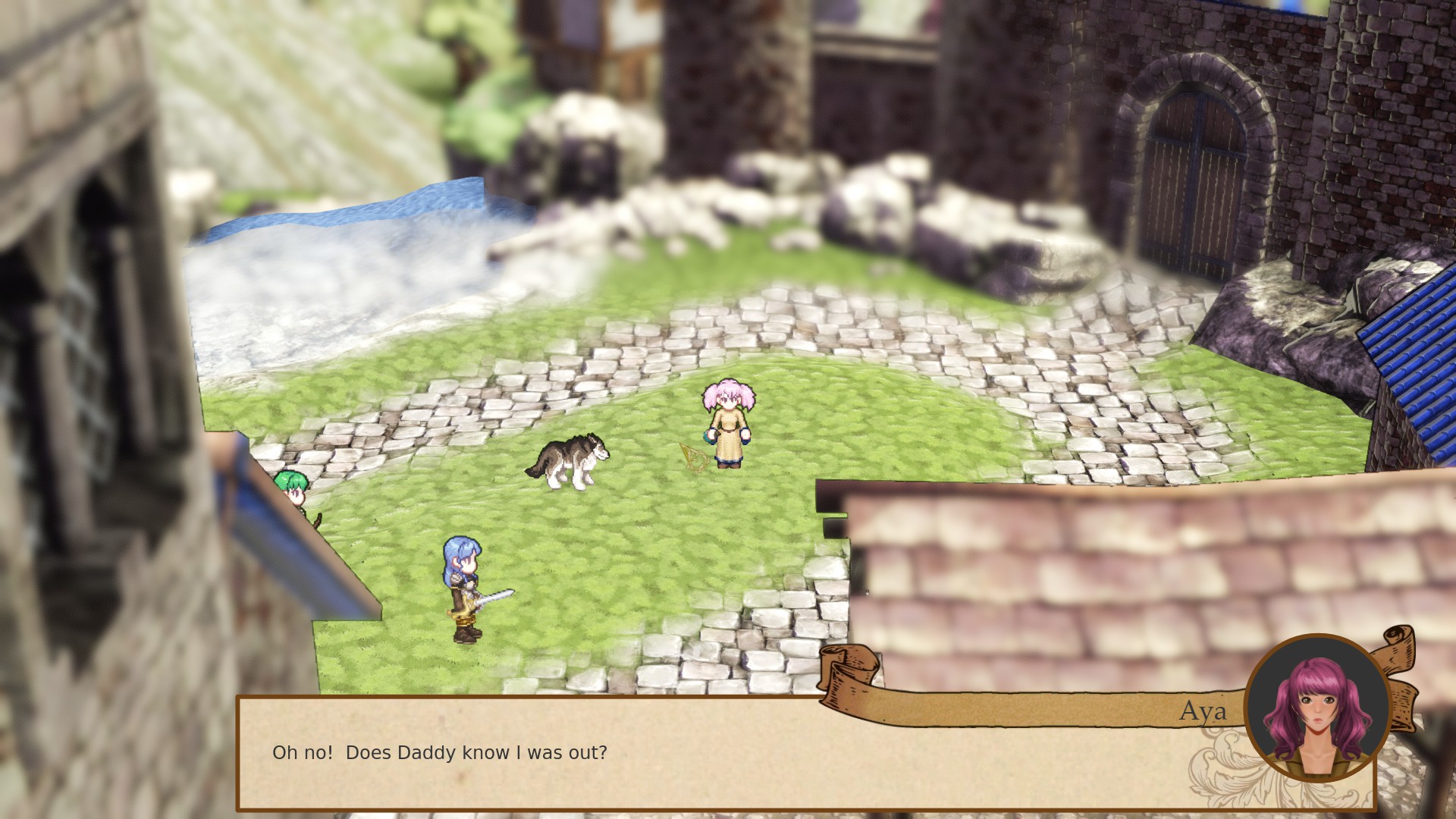 Himeko Sutori is an example of Early Access done right. The developer clearly has a passion for their project and is consistently available to their player base to discuss both the future of the game and current issues being suffered within it. Army management is its high point and if you enjoy grinding for character progression this may very well be a game that you should get your hands on as it’s provided me with many hours of entertainment and will certainly continue to do so. However, Early Access is Early Access and the game is currently still rough around the edges. The developer is still working on adding to and improving the story, classes, foes, and technical side among other aspects. I encountered a number of issues while I was playing, most of the minor such as missing text from an item, though I did experience a bug where I fell off of the map instead of changing zones which also ruined the autosave costing me a couple hours of progression. I was mentioning my thoughts and issues to the developer as I was playing, thanks to their open forum for the game, and I was provided with a fix for that particular issue and an explanation of what may have caused it.

If you enjoy the bumpy ride of Early Access and you would like to support a model developer in creating what may become a strong entry in the genre, pick up Himeko Sutori; for all of the flaws that it still has it’s been a lot of fun to play. If you want to play a finished game without any issues along the way, I would wishlist this one for later as it still needs further development before it reaches its full potential.