We take the role of Di Renjie, a new and bright detective who is called into a compound where secret political matters are resolved because of the murder of one of the ambassadors there. Detective Di uses his sharp intellect and deductive reasoning to make sense of the situation, but this is only a start of what appears to be a string of several murders that lead our detective into the city Chang’an to become the magistrate of the Empress Wu Zetian. The Empress gives him a task of uncovering this mystery and to find the killer. 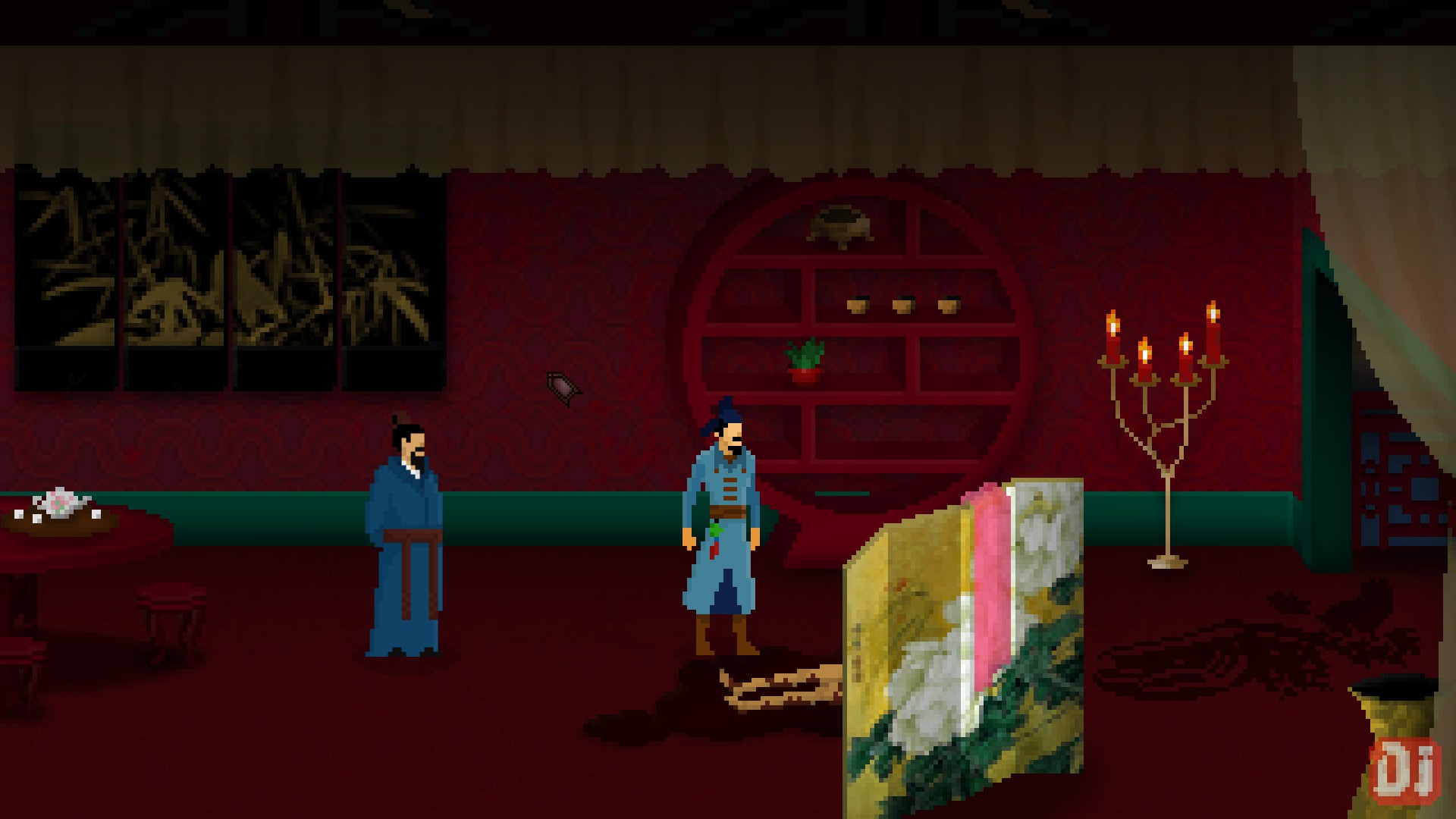 The story is easily the strongest aspect of the game. In fact, it really surprised me. I was expecting a mildly good story, but what I got was so much more captivating and addicting to follow. I finished the game within 4 nights or so, completing about a chapter each time, and it felt like I was following an amazing murder story, desperately wanting to know what happens next and, along with Detective Di, trying to deduce what was going on.

The story has great pacing and constantly reveals new twists and turns as we explore a new murder scene each time. It’s edge of the seat stuff and some moments are even shocking. As we analyze each murder scene to try and understand what happened there, it serves as a puzzle piece for the overall story, and we can’t help but wonder how all those murders are connected.

The main character we play as is very likable and resembles honorable qualities we all strive for, being a sort of the young idealist who is committed to his principles, and many of the other characters were also noteworthy and nicely developed too.

If you enjoy a good murder mystery story, then you shouldn’t miss this. It is clear that the plot was given a lot of attention and was written by some talented people. 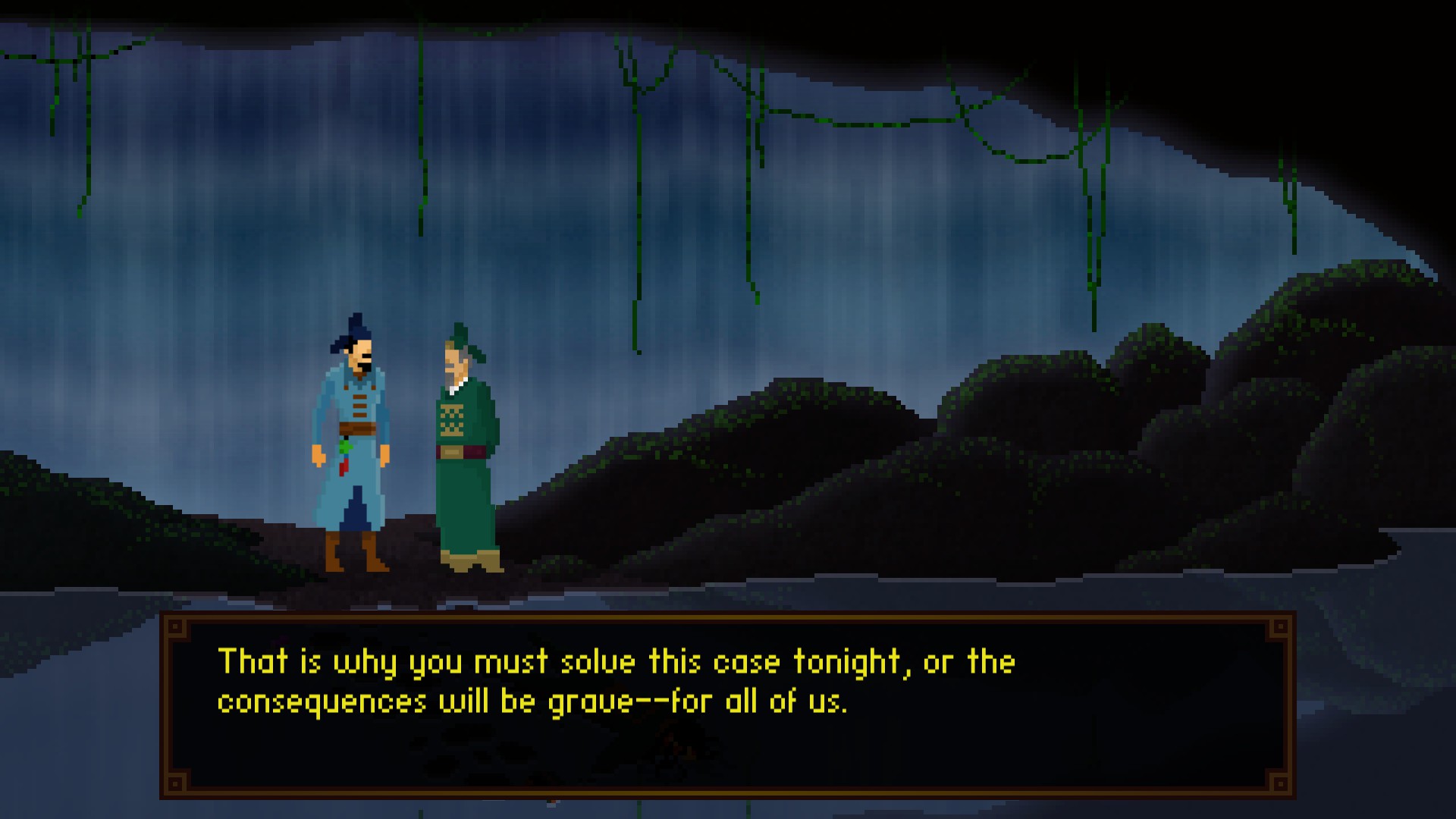 This game plays out quite similarly to most traditional point-and-click games. We interact with parts of the environment, collect important items in the inventory for use later, and uncover parts of the backstory by chatting with the NPCs. Since most scenes here involve murder investigations, we get to really put some of our intellect to use, to analyze murder scenes, to gather clues surrounding the mystery, and to try and deduce the events that transpired. 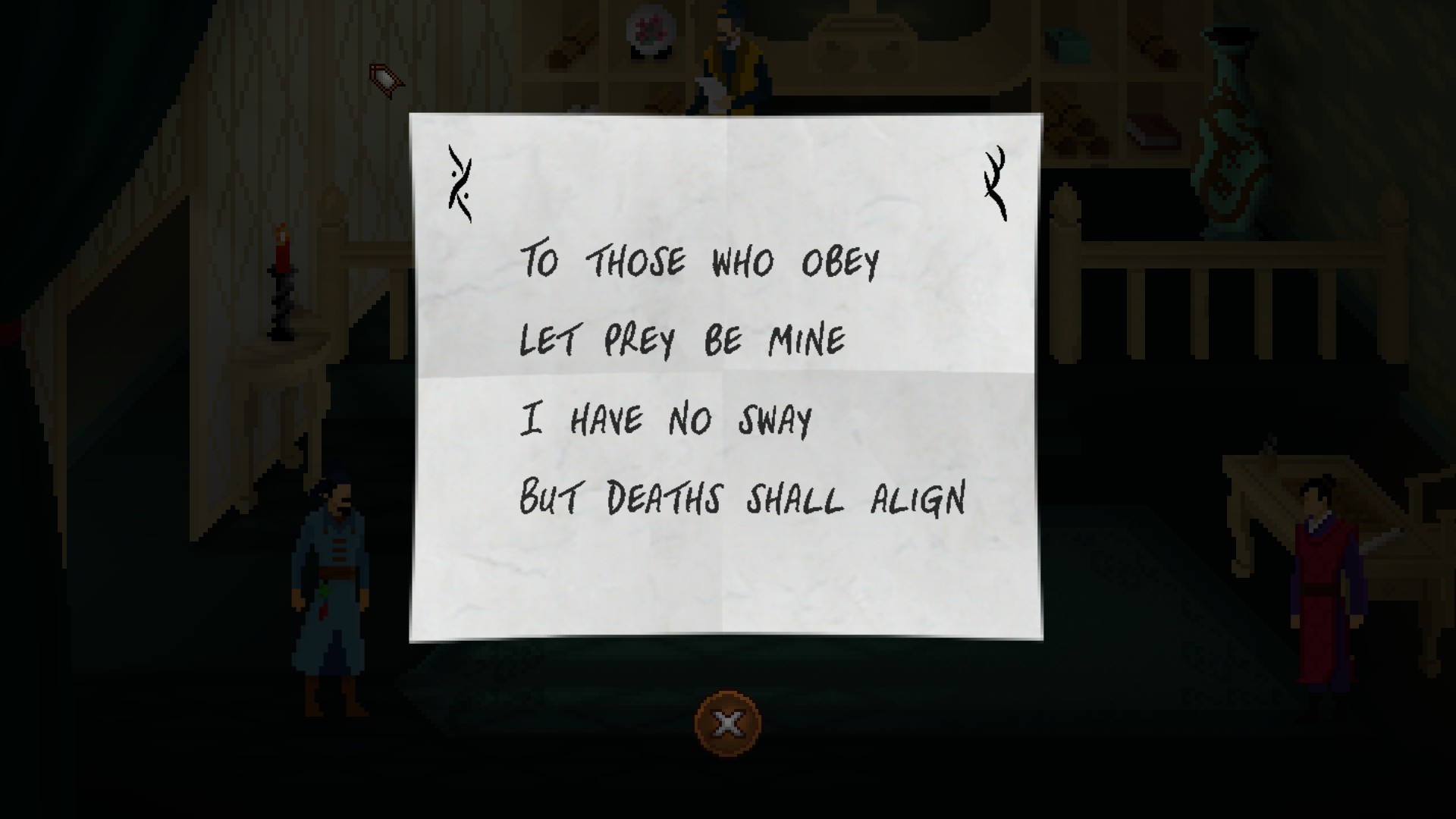 As we analyze each crime scene, we have a deduction board for that murder where all our key finds are noted. Once we’ve collected all the pieces of evidence for that crime scene, Detective Di reports all this along with his deductions to one of the important NPCs. At that point, we get to see a case re-enactment, which I thought was a really great touch. Instead of simply talking about what happened, we get to see it as a sort of a flashback, with Detective Di’s explanation on top of it as we see the scene unfold on the screen.

In many instances, we also come across various puzzles where we must figure something out in order to make progress in the story. Most of those puzzles were nicely done and satisfying to solve, but a few were a little on the annoying side and required some trial and error due to vague information given, such as a certain puzzle where we had to solve a couple of riddles to figure out two words that make up a title of a book, or one where we had to find a hidden message in a letter.

A few of the puzzles also seemed unnecessary and were out of place in a game with a serious plot like this, such as one where we had to lure a cat down with a fish treat. That one felt almost like a filler.

However, I think you’d find some annoying or out of place puzzles in virtually every point-and-click game. And despite having a few of those, most other puzzles in this game were pretty nice and fitting. 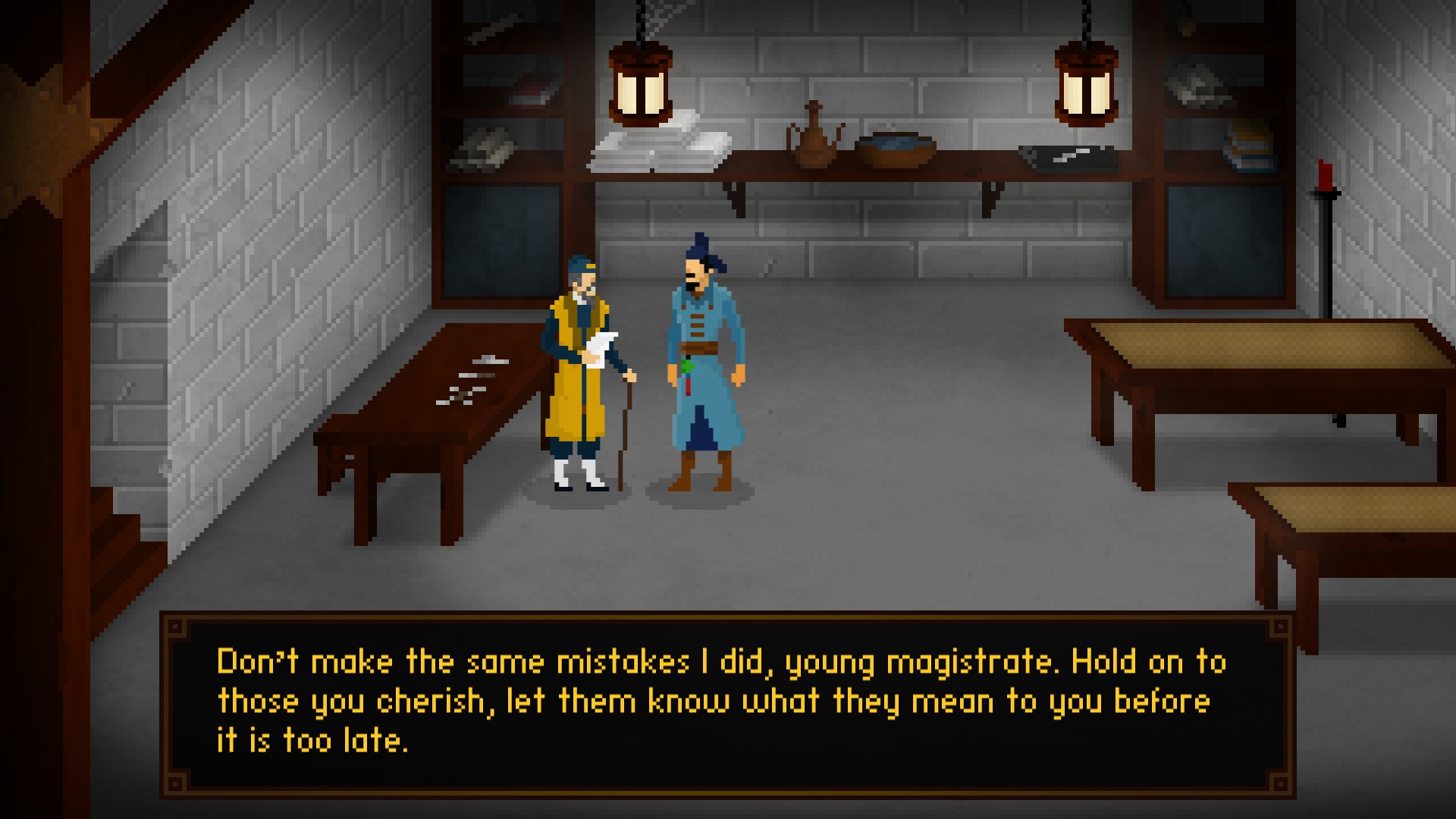 The characters and environments are all drawn in a nice pixel style. It might seem unusual for a game about a serious murder plot such as this, but somehow it works and manages to convey enough of a shock factor to have an impact. Perhaps our imagination does the rest to fill in the gory details that aren’t too clear from pixel sprites alone.

The music is pretty great in most parts of the game and really amplifies the atmosphere during the tense scenes. The tracks that play during crime scene analysis and case re-enactment were my favorite as they were particularly tension-inducing in all the right ways, and uncovering new disturbing finds while these tracks were playing was a great experience. 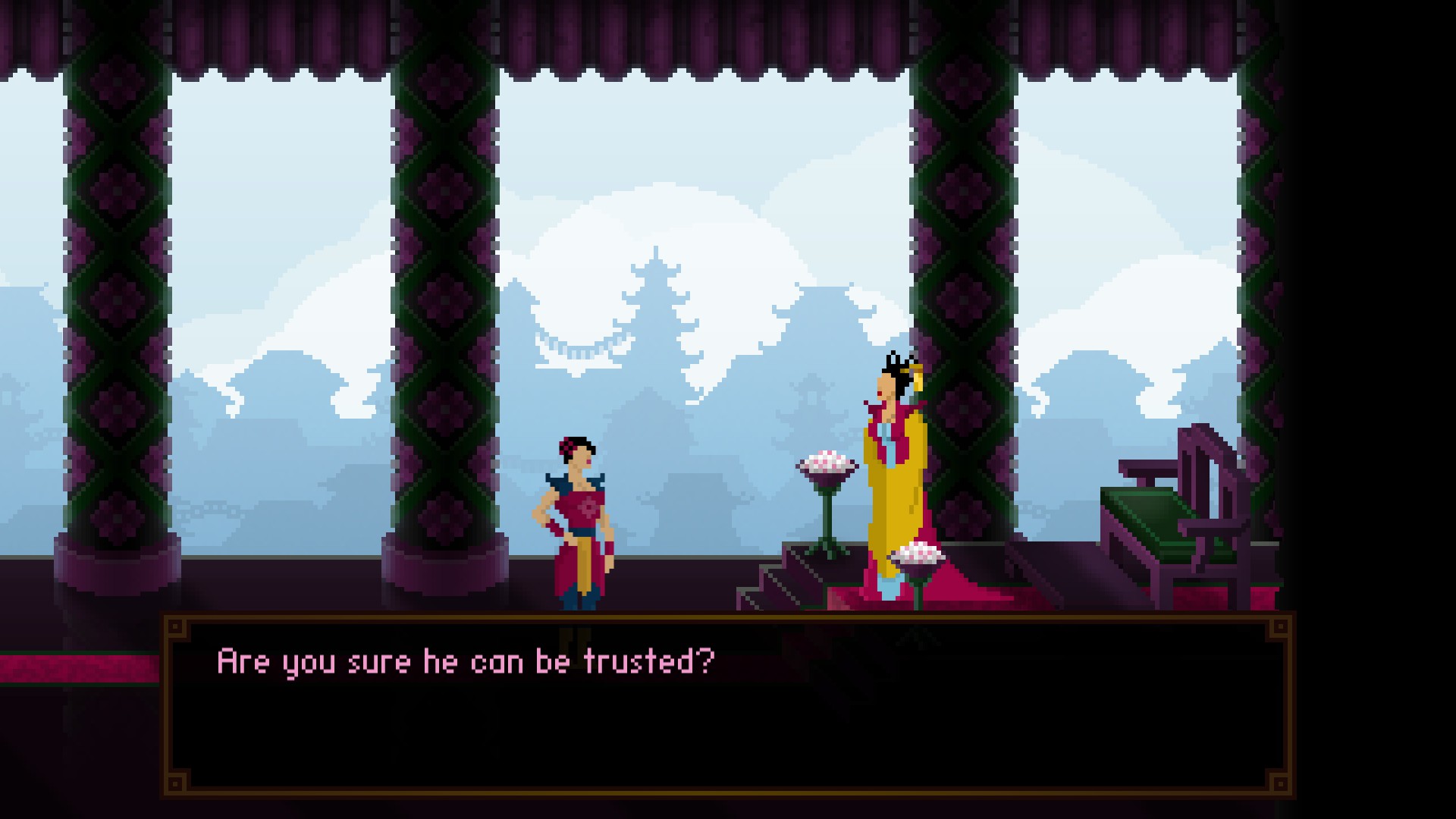 A captivating and well-paced murder story that will keep you guessing and coming up with your own theories on what’s actually going on. This great story is supplemented with a traditional feel to point-and-click gameplay, an Ancient China setting, a good soundtrack, and an old-school pixel art style. Some of the puzzles might get you scratching your head and using some trial and error, but most are executed well and fit with the pacing of the game.

‘Detective Di: The Silk Rose Murders’ is one of the best stories I’ve encountered in video games, and no doubt, I’d recommend it strongly to anyone who enjoys a good murder story or anything concerning Ancient Chinese culture. This gem deserves more attention.