REVIEW: The friends of Ringo Ishikawa

REVIEW: The friends of Ringo Ishikawa

Break out your smokes and channel your inner delinquent as you brawl, study, and hang with your friends during the autumn of your senior year in this open city, narrative-focused, action- RPG.

The friends of Ringo Ishikawa intrigued me with my first impression of its overall concept but caught me by surprise with its narrative depth. I was expecting a city-sprawling beat ’em up with character progression with a side of characterization and story but in reality my expectations were reversed. This is a game that keeps you entertained with gang fights and city exploration but differentiates itself from its peers by using them as only part of the whole that is Ringo Ishikawa’s life, parts that you can mostly ignore if you so choose.

Put Up Your Dukes

Your introduction to the game isn’t pulling any punches as you are thrown into Ringo’s shoes while he and Ken, a member of his crew, are getting jumped while riding on a train. You’re outnumbered but you and your boxer buddy are a couple of badasses and you can clean them up pretty quickly. This duo roughs up another group prior to catching up with the rest of the gang who have already found themselves mid-brawl with yet another group. After being the victor in this fight as well, you’re introduced to a couple of cutscenes that offer some insights into the characters and the world around you before officially handing Ringo over to you for the remainder of his final autumn at school. Will you turn his life around by making him a model student and stepping away from the image and reputation that he’s built? Will you prioritize getting a job even though it will eat up valuable time including some of which that you would normally be in class for? Will you skip class altogether and rule the streets with your fists? These are all questions that you’ll be answering in one way or another as you play. 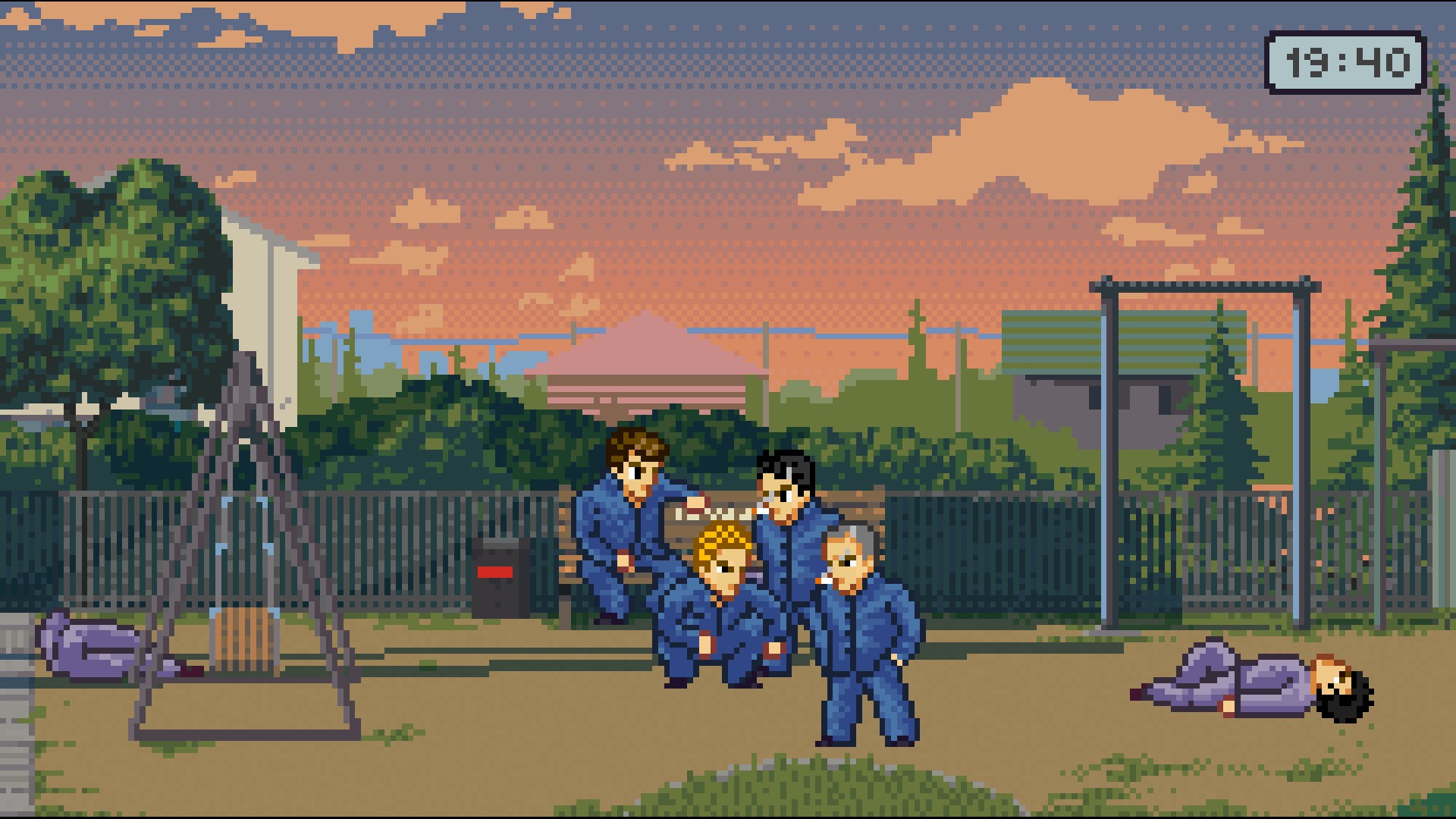 A City And Its People

The depth of the characters and setting are far deeper than you would assume at first glance. Through Ringo’s adventure you’ll have many conversations that lead to a deeper understanding of those around you and the lives that they live. I found myself genuinely interested in the characters and this curiosity extended to not only Ringo’s gang but to his classmates and the other residents of the city as well. Many of the characters will even surprise you with their depth after you think that you know them by a surprise revelation that makes you understand them that much more.

Dialogue is exclusively text but feels more natural and authentic than most games that I’ve played; it’s not often that I feel immersed in a 2D side-scroller but the developers succeeded in that department. It only adds to this immersion that the majority of these dialogues are optional and can easily be missed depending on how you’re living your life. 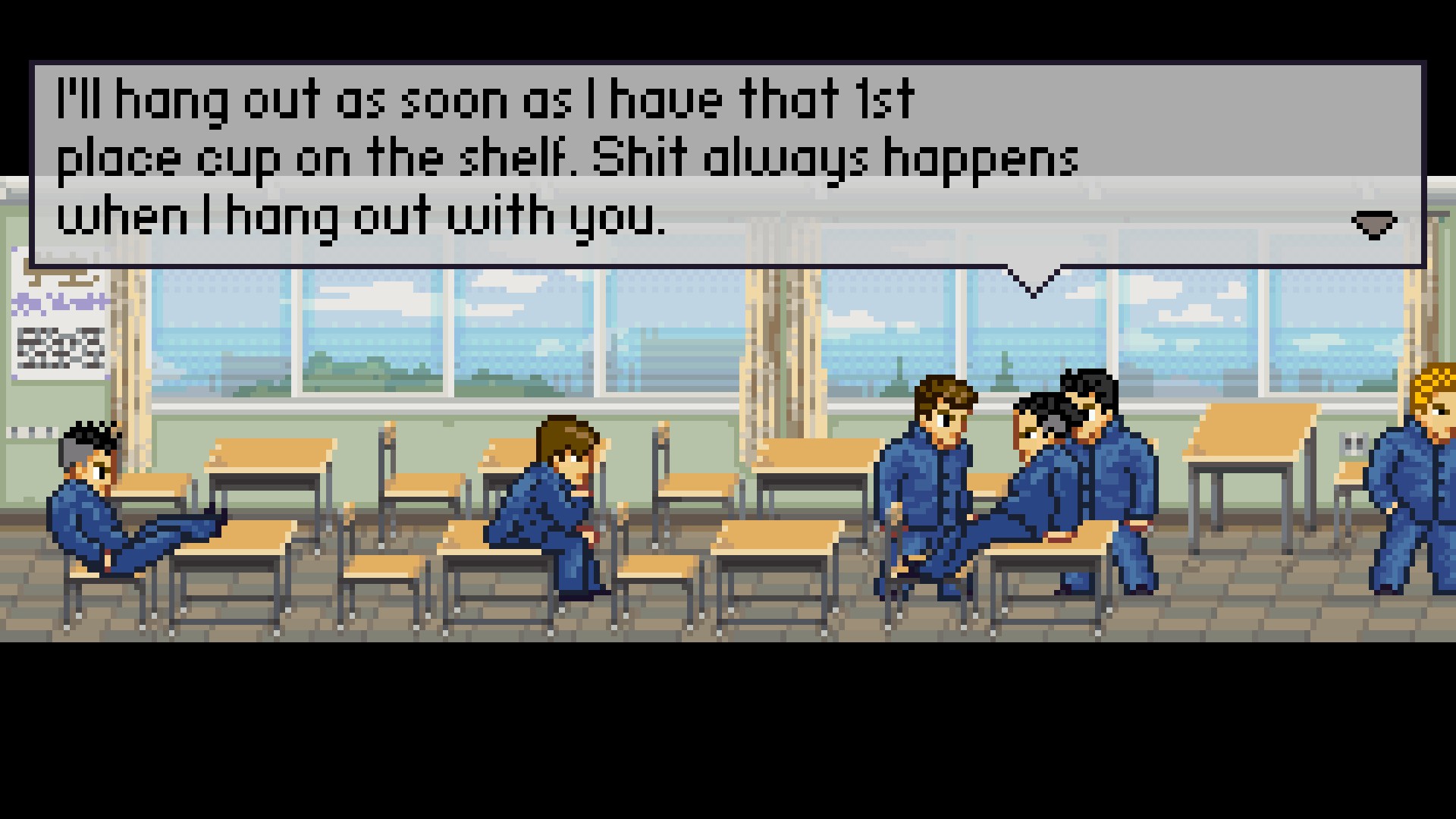 A Day In The Life Of

Ringo’s life is ruled by the law of time much like our own. He’s subject to a seven day week and all that it entails as well as a clock that is always ticking forward. Although you are always free to do as you wish at any time, the school, businesses, and even residents have schedules that will restrict some activities that are available. If you’re wanting to get a fresh cheeseburger at five in the morning or go to class on Sunday, you’re out of luck.

The city itself certainly isn’t the largest game world that we’ve seen but I never felt restricted by it and it was always more than enough to create the desired environment. There is a particular scene in the game that involved a heart-to-heart with Ringo and one of his crew that drove home the point that the few neighborhoods around them were their entire world; even other parts of the same city were like foreign and distant worlds to them, a place that they might escape to one day. Additionally, each location in the game is different from any other and this uniqueness combined with the contained area that Ringo knows within the city creates an atmosphere full of memorable locations that make you feel like a resident as opposed to a visitor.

With all of the freedom that you have at your fingertips, it may come as a surprise that holding onto yen can be quite the challenge. The simplest remedy to this is to hit the streets, rough some dudes up, and rifle through their pockets for some cold, hard cash. Profits tend to be limited in regard to each individual, but they can quickly add up particularly if you and the boys decide to go out and wreak havoc for an entire day. If you’re playing a more respectable Ringo, your excellent grades can get you scholarship funding which goes straight to your wallet with an amount that increased in proportion to your grades. If you decide that you would instead like to enter the workforce and get a part-time job, you’ll lose valuable time but gain a hefty sum of yen with each shift. 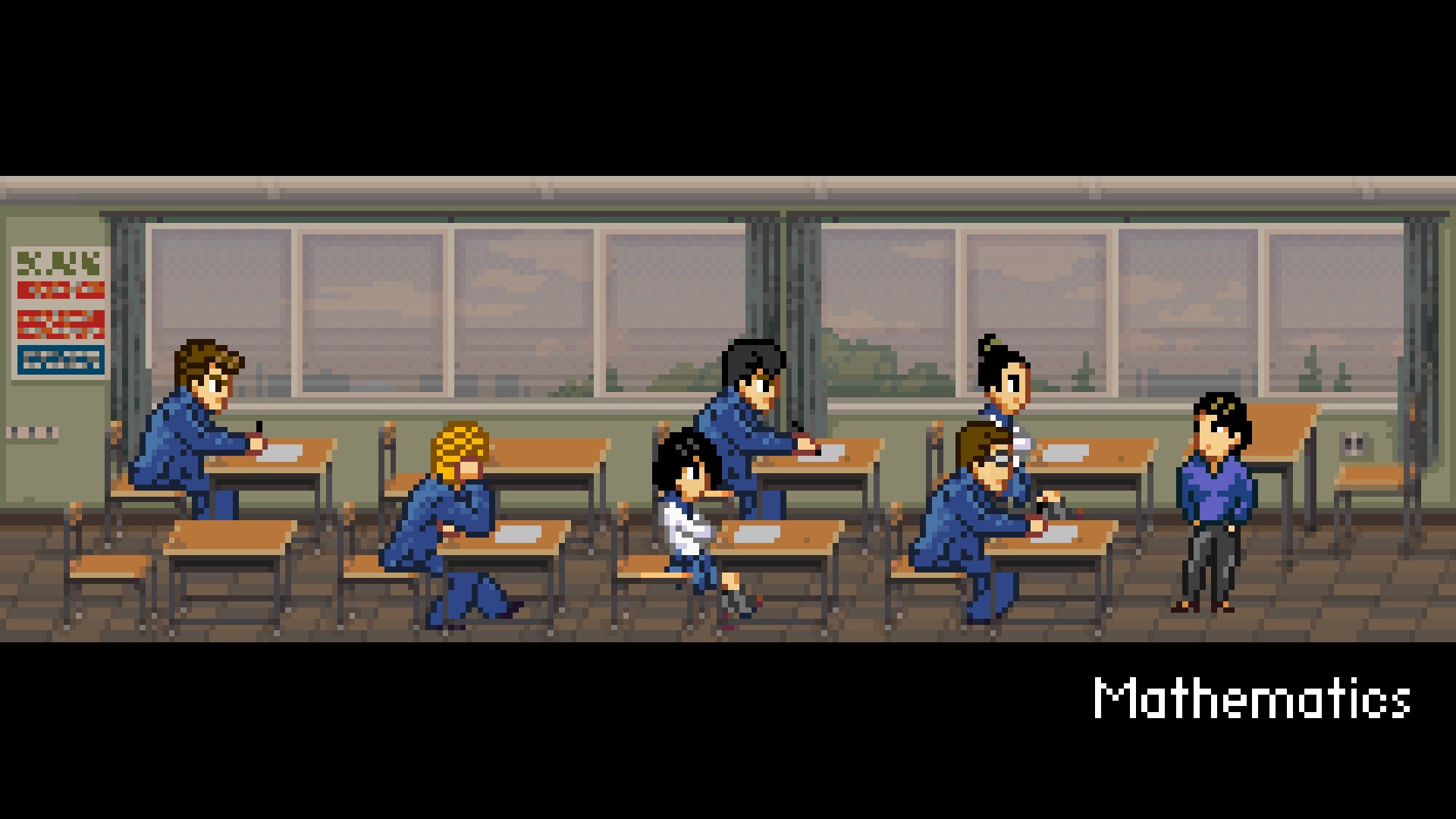 There are a number of character progression systems in place that act relatively independent of one another. If you’re out on the town pounding faces, you’ll likely be gaining experience for leveling up as well as developing your punch, kick, and throwing attributes and their defensive opposites. If you’re cranking out pull-ups in the park or banging out some reps at the gym, you’ll be increasing your maximum health. Attending classes and studying the materials of each subject at home will increase your knowledge of these subjects individually and are required for achieving any kind of decent grades on your Saturday exams. Meanwhile, reading books, watching VHS tapes, and spending time with trainers can teach you new abilities, both passively applied and actively used, that can drastically improve your effectiveness at achieving whatever goals you have set out for. 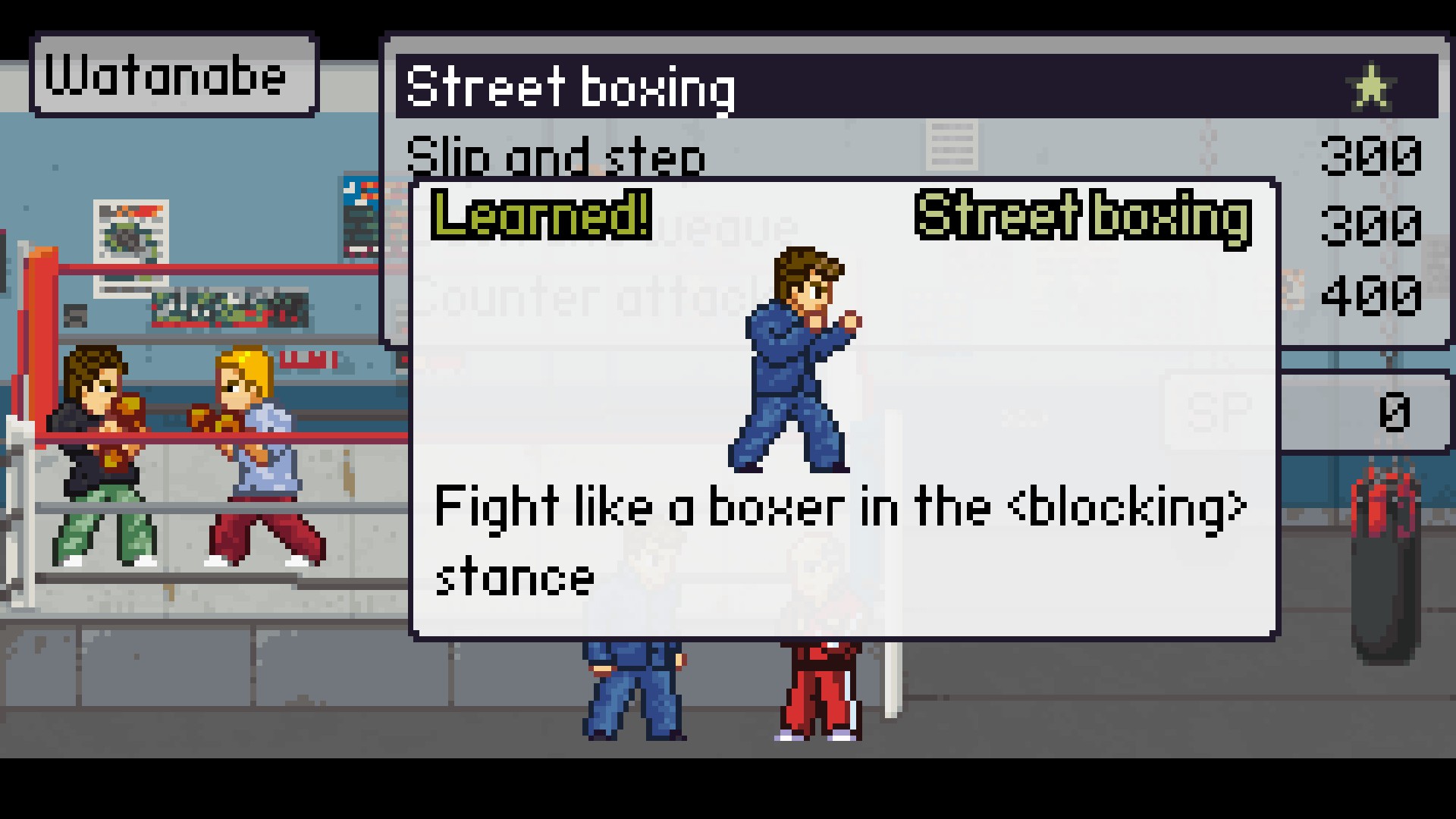 A Black Eye Or Two

Although I enjoyed my time with The friends of Ringo Ishikawa, it certainly has its flaws. Most notably, literally nothing is explained to you. If you were to play without seeking outside resources it is entirely on you to discover every aspect of the game and its mechanics. There are several items in the game that I still have no idea what effect they have, particularly the more expensive ones that I decided not to gamble my yen on. I can almost guarantee that most players have or will enter this game in either a state of confusion or a belief that it is a far shallower experience than it actually is.

Another complaint that I have, though far more of a minor one, is that you have to awkwardly maneuver yourself to straddle unconscious foes to loot them; there’s no simple blinking out of existence for your defeated foes as they turn into bouncing coins. It certainly adds realism to have the area littered with delinquents but it leads to a significant amount of time to get the positioning right particularly if a number of them have been defeated at the same spot. I started kiting foes so that they would drop in convenient areas when defeated and that certainly was not beneficial to my immersion.

Finally, a bit of a nitpick as opposed to a true complaint, I would have liked to see this game really double-down on its strengths. The dialogue and setting that the game provides are already excellent but I would have liked to see every character have even more to them, some characters have something new to say every day and I would have enjoyed it if this were the case for everyone, no matter how mundane it may be, as opposed to specific individuals. This would have made the game very replayable as it would have enough narrative content that it would be impossible to experience it all in a playthrough or two. I have to put emphasis on the fact that the game is not lacking this, but I would have liked to see it built up a little more as I occasionally ran into a character that I wanted to keep learning about and there would be a number of days that they wouldn’t have anything to say. 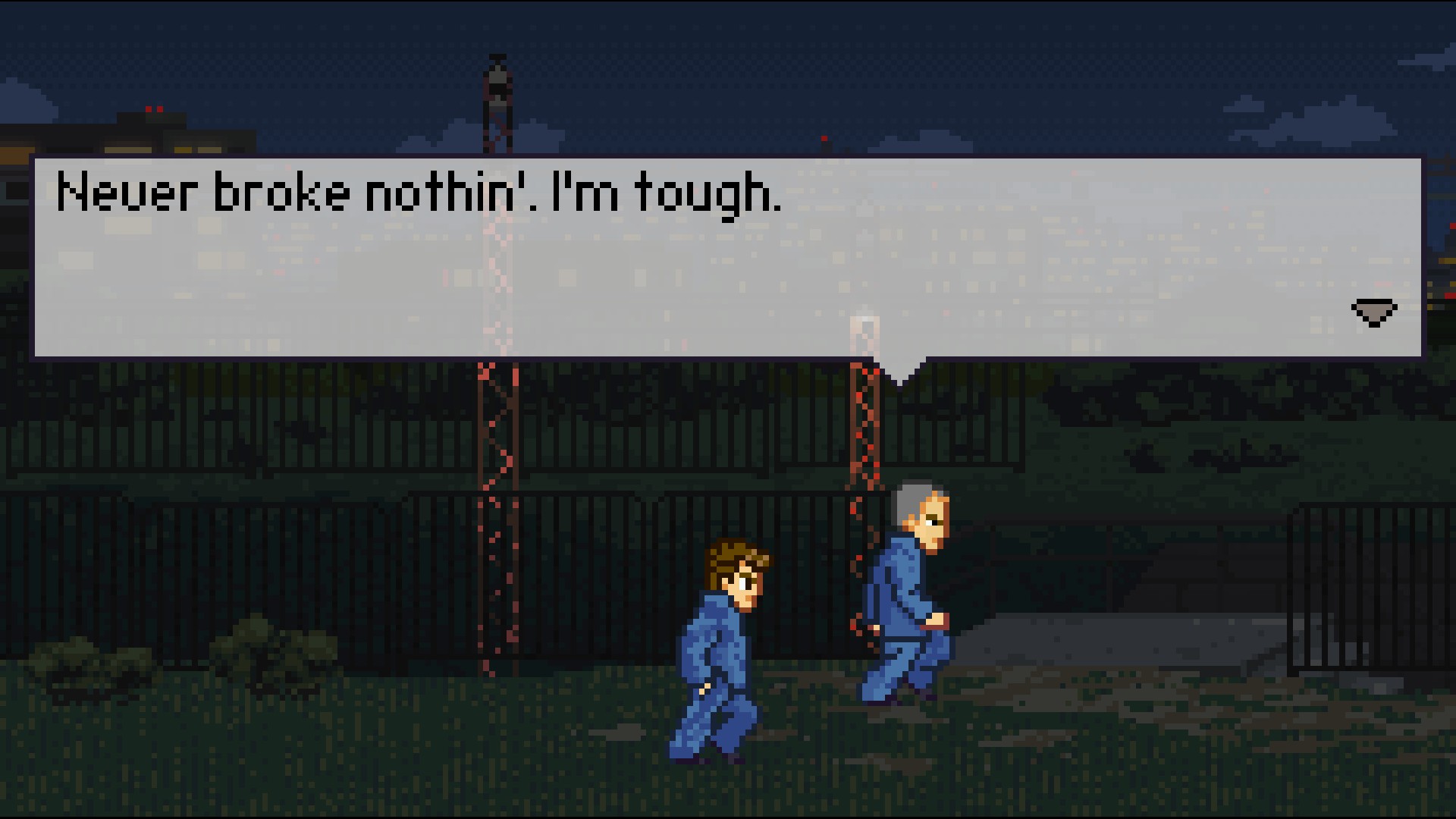 Welcome To The Streets (Some Newbie Pointers)

There’s not even a shred of hand-holding from start to finish here, so I decided to add this section into this review to give a few words of advice to those who are interested in the game. If you want to fight the odds and figure it out all on your own, I would recommend skipping right to the verdict. Otherwise, here are a few pointers that I would have liked to know earlier than the points that I discovered them:

1) This game is very open-ended. There are no wrong answers, you don’t have to do anything that you don’t want to, and you’ll probably have the most fun engaging in the activities of your choice and deciding on your own set of goals. If you’re trying to find out what the game wants you to do, you’ll eventually discover that it has no preference.

2) Hit up the park for early fitness gains that are free of charge. You can find it by heading one zone to the left of the one that your home is in and taking the steps down that you can see on the backside of the bridge. Once you do this, just keep heading to the right and you’ll know when you get there. By jumping up to the different kinds of equipment that are there, you can perform pull-ups and dips once per day for small, permanent maximum health gains. Your time may be better spent at the gym later but, for now, this place is far more affordable.

3) Speak to everyone… and keep doing that. Not only does this help you catch events and dialogues that you would otherwise miss, there are certain unlockable features that require that you speak with a certain individual a number of times over the course of the game. Spoiler: some of these features are very useful.

4) If you’ve decided that Ringo just can’t let go of brawling in the streets, remember to bring “The Squad,” particularly in the early game. Early fights can be a challenge and being ganged up on against outnumbered foes can end up with you waking up at 6 AM having lost a lot of time from being KO’d. The best time for gathering your friends up is during school hours; they’re all there somewhere and they often gather up on the roof after hours. 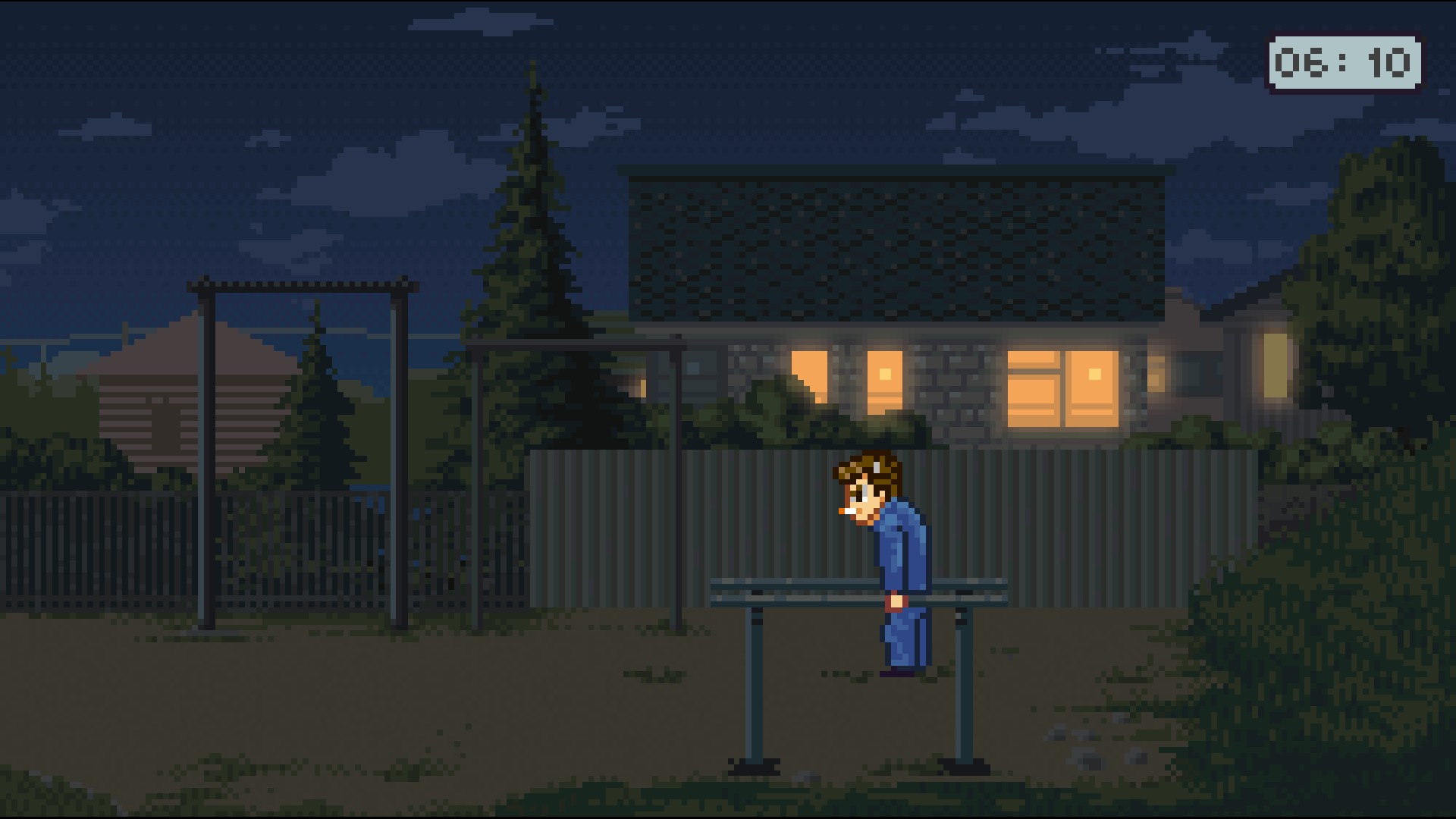 A genre-bending and fairly experimental game, The friends of Ringo Ishikawa is not a game for everyone. If you demand clear objectives and clear details that explain the game and its systems, I’d bet my bottom yen that you’ll be frustrated by the game. Similarly, if you’re looking for a new River City Ransom-style citywide beat ’em up, you may find a lot of what you’re looking for here but you’ll also encounter more text and characterization than you care for. However, if you’re looking for an interesting and unique experience that combines old-school brawling mechanics with an engaging life simulation with great characters, this one is certainly worth your time. Even with its rough-around-the-edges design, I very much enjoyed spending the final autumn of Ringo’s school career beating up dudes in the streets while maintaining decent enough grades. 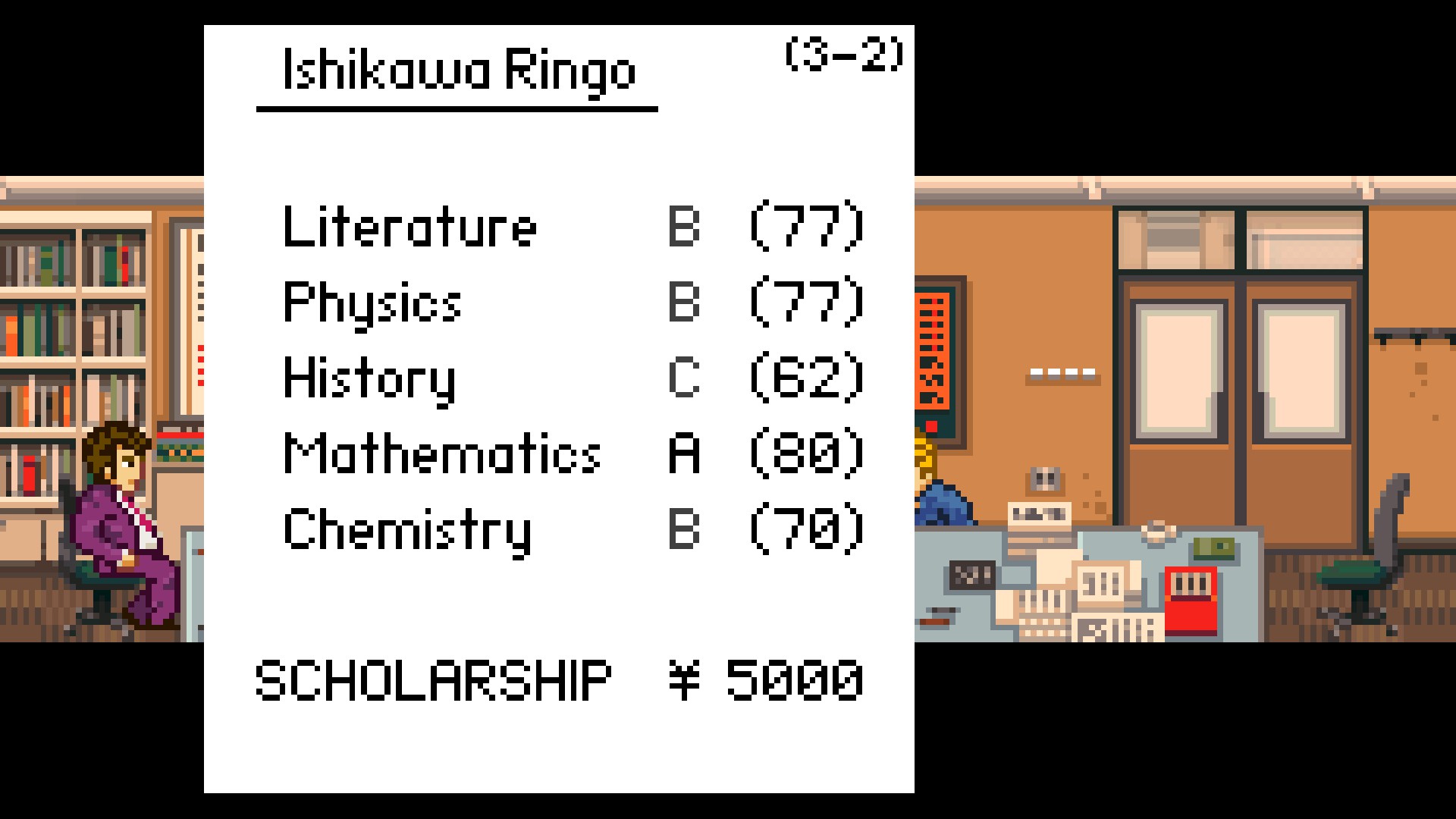