An action-RPG with a clear focus on deep customization, M.A.S.S. Builder is shaping up to be a one of the most entertaining mech games around.

I have some great memories from my early years of gaming that are defined by giant robots beating the hell out of each other. When I became aware that a new mech game with a focus on customization was heading into Early Access, I knew that I couldn’t resist its allure for long. So far, MASS Builder lives up to the expectations set by its predecessors and has the potential to become one of the best mech-based action-RPGs available if its development stays on track.

Spend Some Time In The Hanger Designing Your Own Armor…

Where MASS Builder truly shines and stands out the most is in the vast customization that is available to the player. Each MASS (Mechanical Assault Skeleton Suit) is divided into twenty-six different parts with dozens of pieces of armor that you can combine together though many of these are locked initially and you will need to collect them from defeated foes. Each of these parts has three to four regions that can be painted any color that you’d like; if your desired color isn’t on the extensive list you can use the palette that’s provided to blend your own.

For those who have a penchant for building their own mechs, there are thirty-two hangar bays available to you, each housing a mech within them that is immediately available for you to turn into your next unique masterpiece of a killing machine. It’s even more convenient that once you have unlocked a part it is available to use as frequently as you would like across as many suits as you wish with no further expenditure of resources. 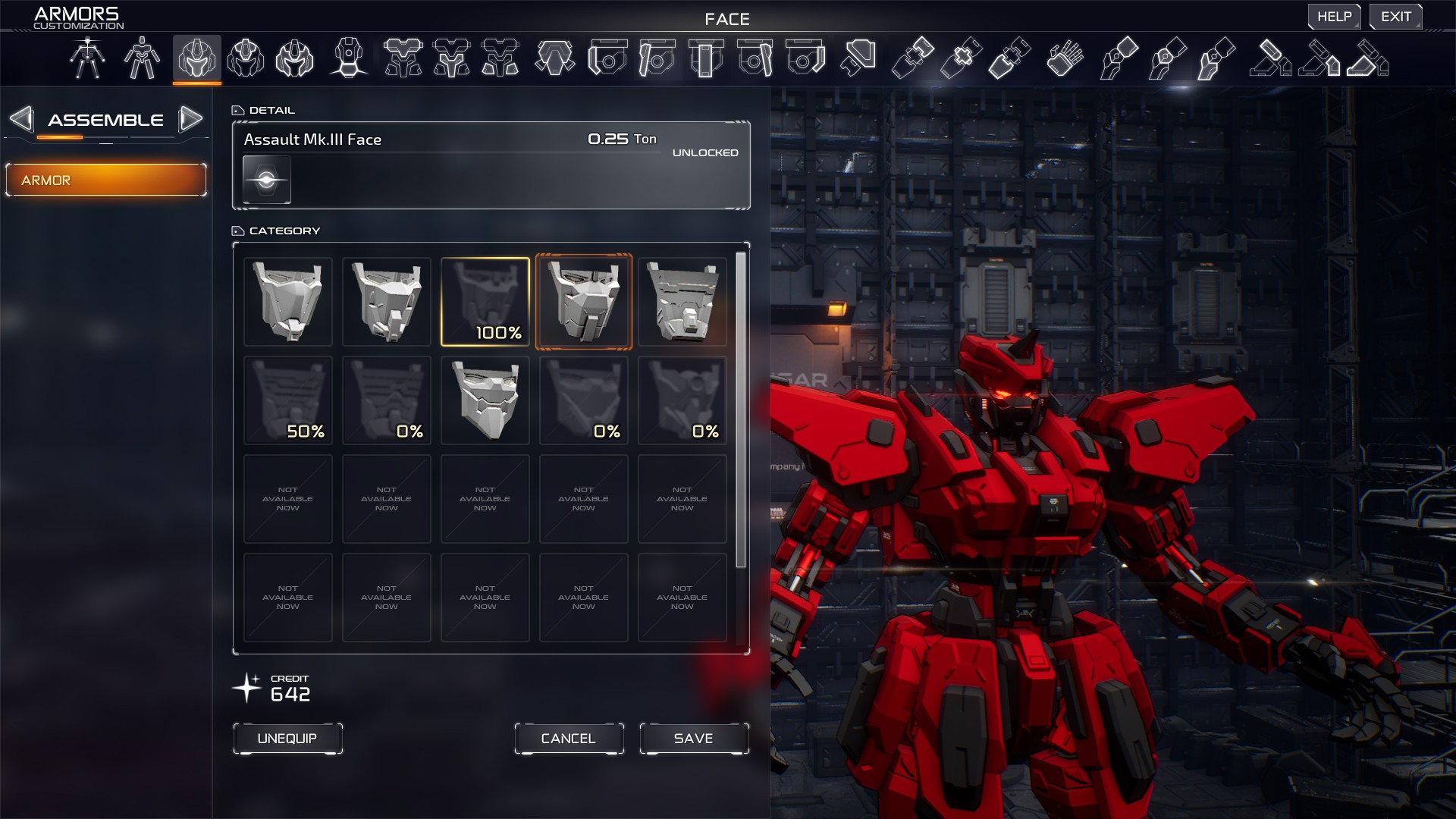 …And Your Weapons, Too!

If you enjoy deep customization options, you’ll be happy to see that they aren’t restricted solely to armor designs and that your weapons are ready and waiting for your unique touch as well. Although there are far fewer locations on your weapons than there are on your armor, each location has significantly more parts to choose from. You’ll also notice that weapon parts don’t solely exist to look awesome, they also significantly alter their function leading to varying fighting styles. Another nice touch is that you’re able to name each and every one of these that you make to truly seal in the fact that they are a part of your unique arsenal.

Each MASS is capable of having access to eight close combat weapons and four each of bullet shooters, energy shooters, bullet launchers, and energy launchers. Within each of these weapon classes you can have half of this arsenal equipped at a given time but the ammunition will be split between each weapon chosen from the same category meaning that it’s up to you to decide whether you want a pair of weapons within the same class for versatility or if you want to double down on one to maximize the amount of ammo that is available to it. 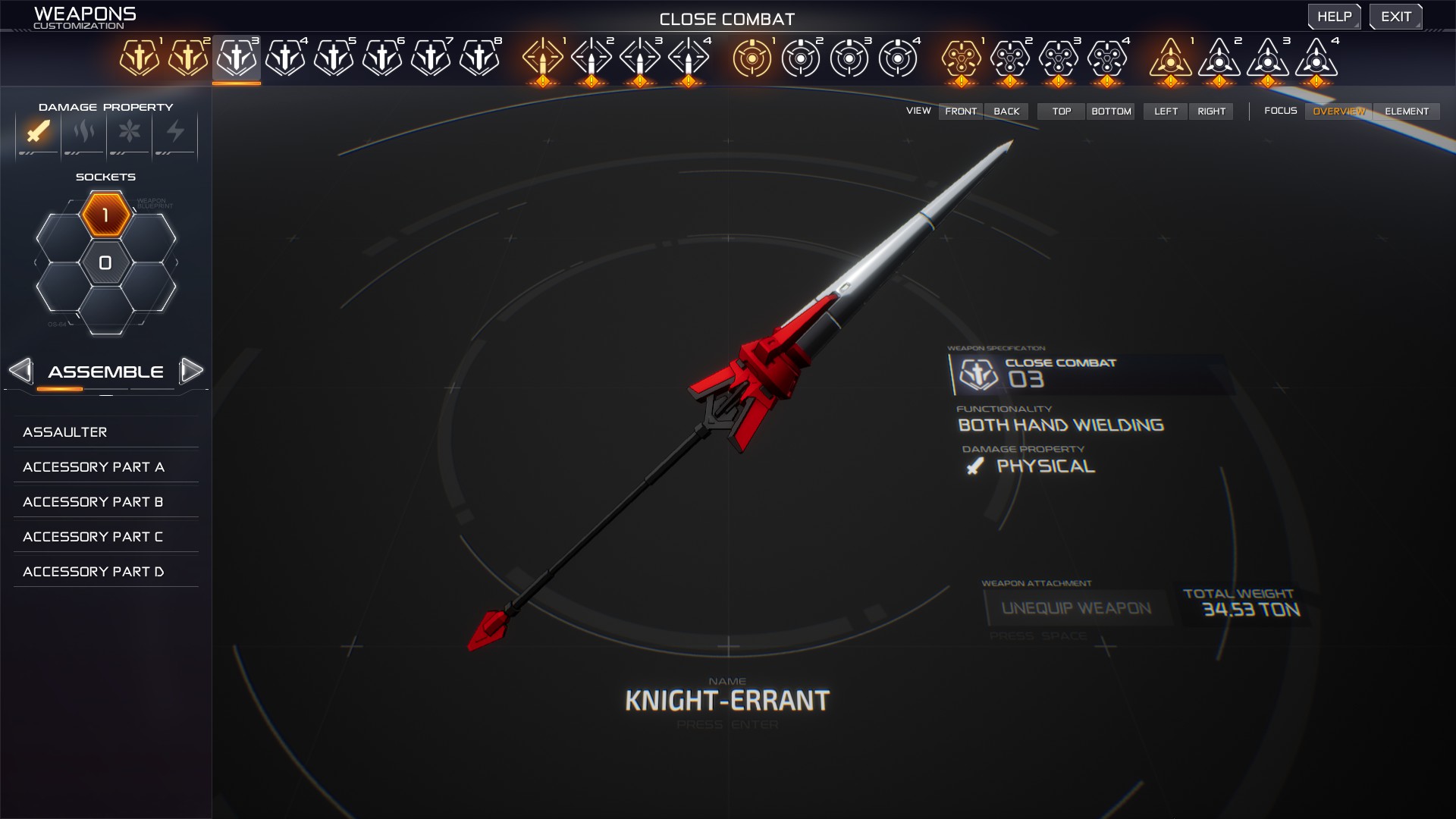 After gaining a number of parts and some experience in combat, I found that I preferred the short reach, high damage provided by a dual-wielded set of what were basically brass knuckles with a slot but wide arcing lance for backup if I found myself getting into too much trouble being in the enemies’ faces all the time. I added some ranged firepower to that by designing my bullet shooter as a chain gun that ate ammo like candy but tore through enemies supported by a single shot energy rifle for when my bullets inevitably began to run low. I doubled up on bullet launchers by equipping one that fired a pair of nukes and another that released a salvo of a dozen rockets that peppered my targets. Finally, I had a single energy launcher that consisted of a pair of laser-shooting drones that would hover around and attack and target that I was locked onto. I enjoyed testing out the weaponry to see how my preferences developed and I’m sure that different players will end up have varying armaments as they all seemed to be balanced impressively well for an Early Access release. 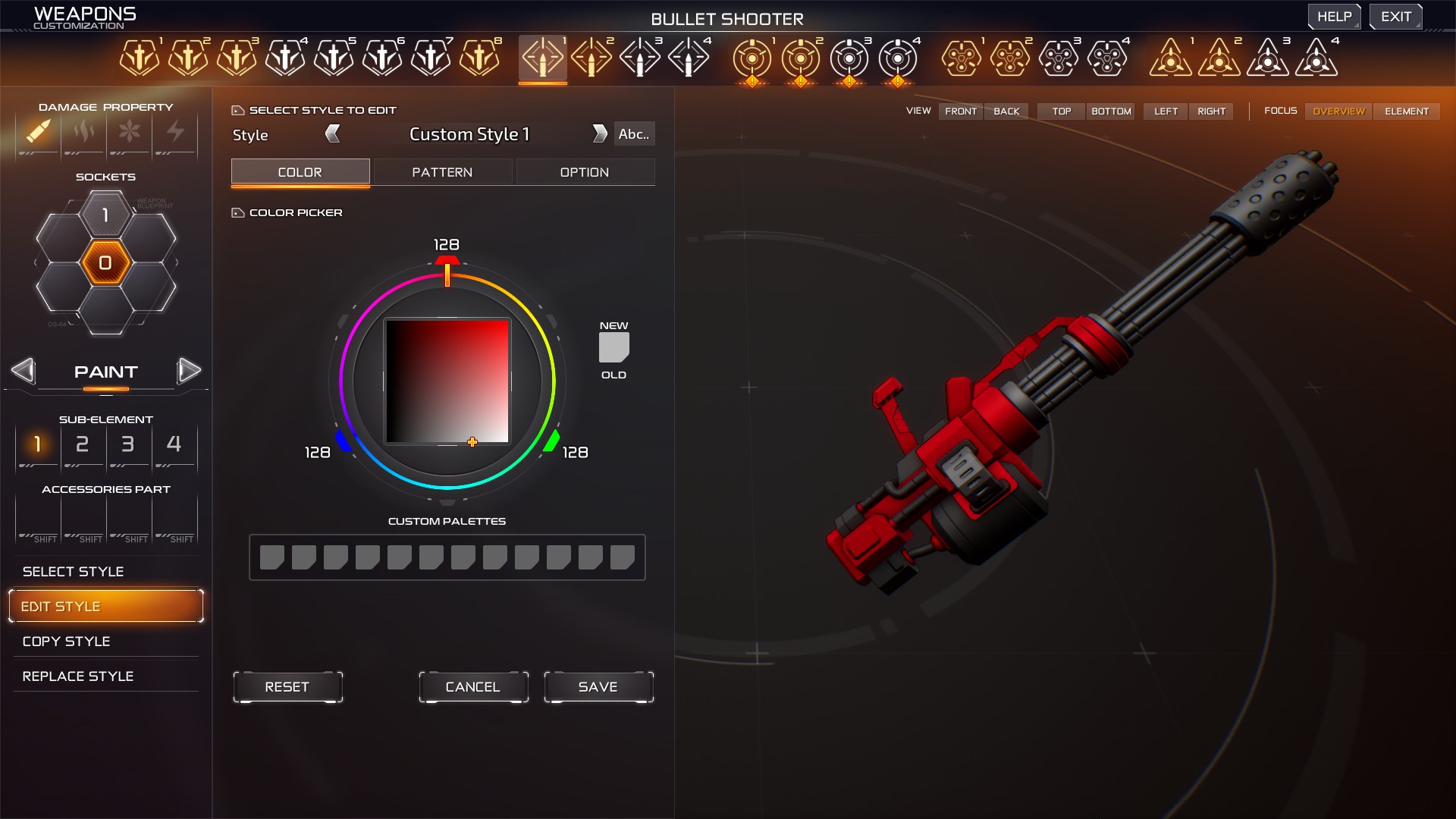 The customization of your mech’s armor and weapons is further deepened by a system of character progression that adds yet another layer of depth to building your MASS. Tuning your suit allows you to equip engines, operating systems, and frames that offer what resembles three skill trees that you’ll likely be building up simultaneously, as resources permit. These three core components act as a base where the lion’s share of your statistics is derived from and, although every model starts with the same combination, there is a wide variety available for each role that results in vastly different builds. These builds can be further tweaked to your preferences with the addition of a variety of enhancements that can be slotted into each of these core components. 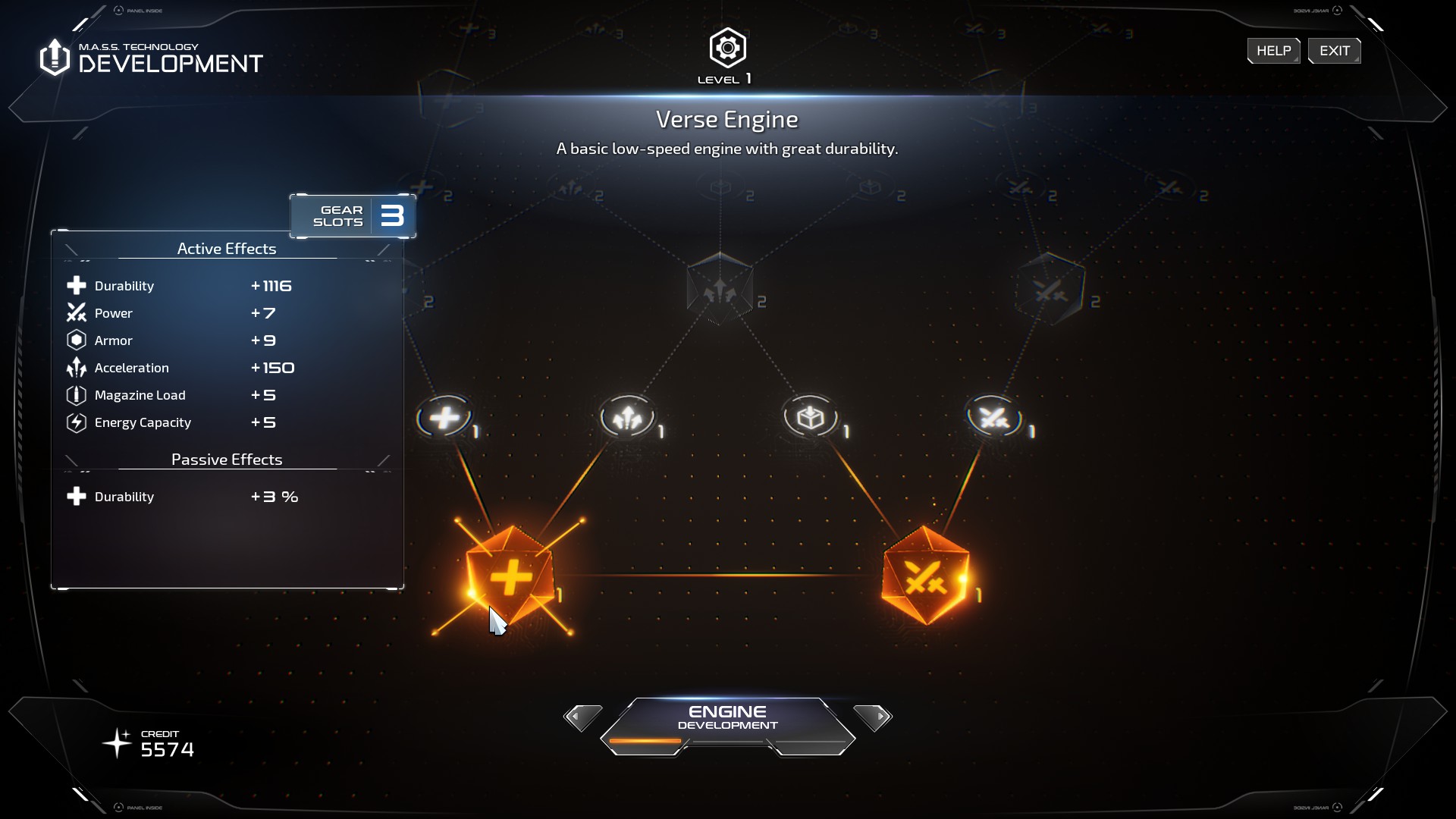 Each upgrade, whether it is one of the core components or one of the enhancements, requires both materials and currency to develop. You’ll frequently find yourself planning ahead to decide on which path your next tuning will take as they tend to be expensive and acquiring the necessary resources takes time. 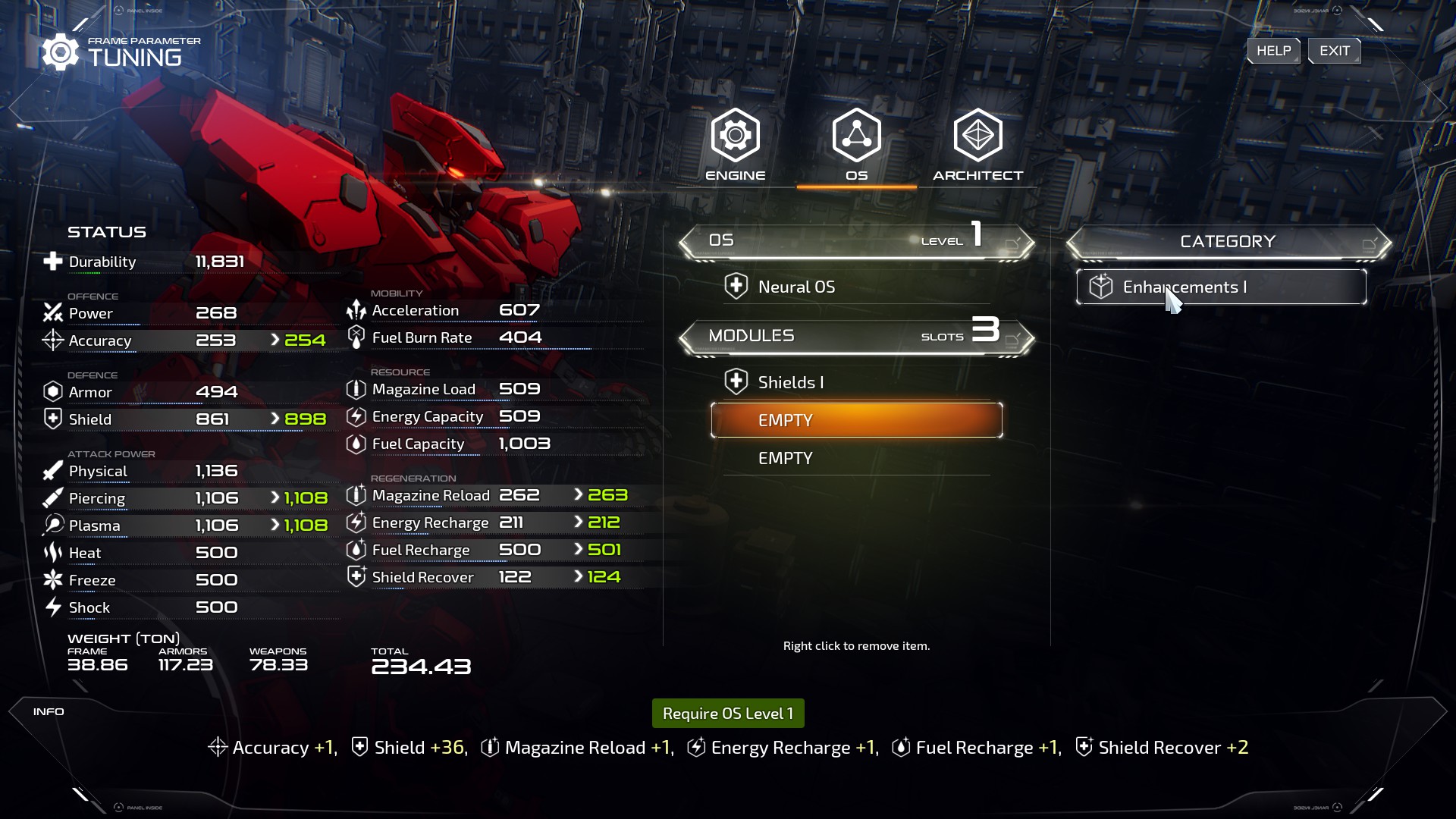 Why Not Blow Something Up With It?

Once your MASS has its initial design and is ready to go, you’ll start progressing through the story and undertaking missions where you’ll actually use it in combat instead of just staring at it with pride. These are currently split into two types: missions and hunting grounds. The former is tied directly to the story and are composed of objectives and individual gimmicks to keep them interesting while the latter is more or less an arena where you’ll be slaughtering enemies for resources. Both types are repeatable, a fact you’ll be taking advantage of, and both are relatively simple as they are composed mostly of trenches connecting open areas full of enemies to one another. If you’re looking for exploration and beautiful environments you won’t find them in MASS Builder.

Combat itself is solid as it employs a number of enemy types, universally of the species referred to as Quarks, that come in a variety of forms. These alien creatures will keep you on your toes as you’ll be leveraging your entire arsenal to effectively combat the hordes of them that are coming for you. I was surprised that there were no enemy mechs as of yet, though the Quarks are a very solid group of enemies that fulfill all of the necessary roles to keep your battles challenging and interesting.

Your weapons play an integral role in your combat strategy but there are a number of other factors that you’ll be considering as you fight against your foes. Throughout your contracts you’ll be keeping an eye on your durability (health that doesn’t recover during the mission), your shields (barriers that regenerate during the mission), and your fuel (another stat that regenerates but that is used exclusively for fast movement and evasion). 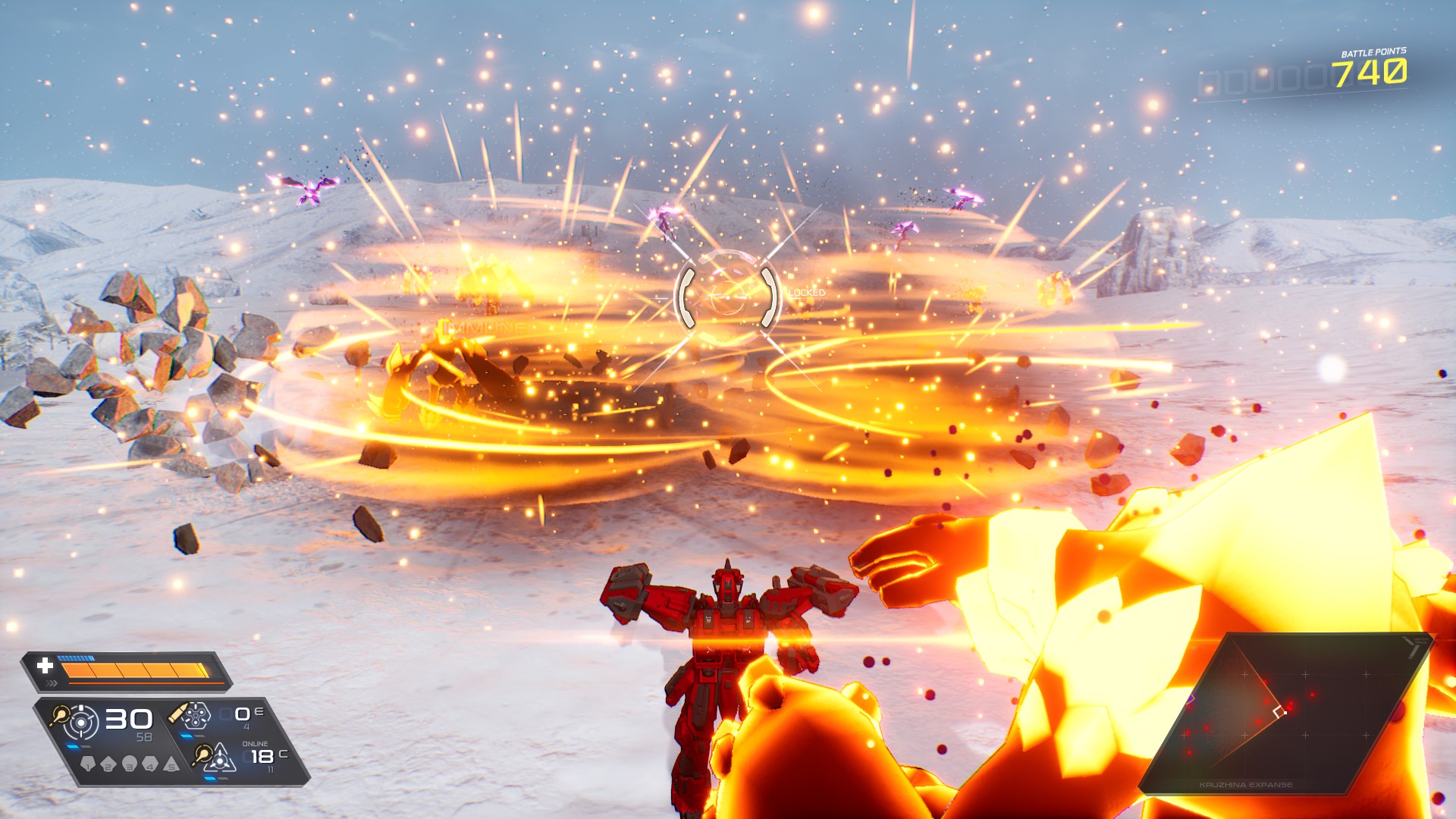 With all of the aspects of MASS Builder that are already implemented, it is easy to forget in your first few hours that the game still has a long way to go in its Early Access state. The tuning development trees show upgrades up to the seventh tech level but the first two are the only ones that aren’t locked. These restrictions are seen almost as heavily in the armor and weapons parts as well; anywhere between one-half and one-third of the parts are simply represented by a placeholder that states that they are still in development. To further add to this point, accessories, additional parts that you can add to your weaponry, are simply not implemented at all as of yet meaning that the majority of the weapon locations are inaccessible. Although this may be a personal preference as opposed to the overall vision of the developers or other players, I would have also liked to have seen additional model types for the mechs, such as the tank treads or alternatively jointed legs seen in previous entries in the genre, or even mechs that have legs that are replaced with boosters that allow them to indefinitely float above the ground.

The dialogue that we currently have is in a state that is very clearly a poor translation. It’s easy enough to get the gist of what’s going on but I certainly never found myself immersed and even zones out of a few of the conversations because of this. On the other hand, the game succeeded in drawing me into its lore not via its story but its archive which, while still mostly in development, had a couple of sections for materials that you can collect and detailed them quite nicely. 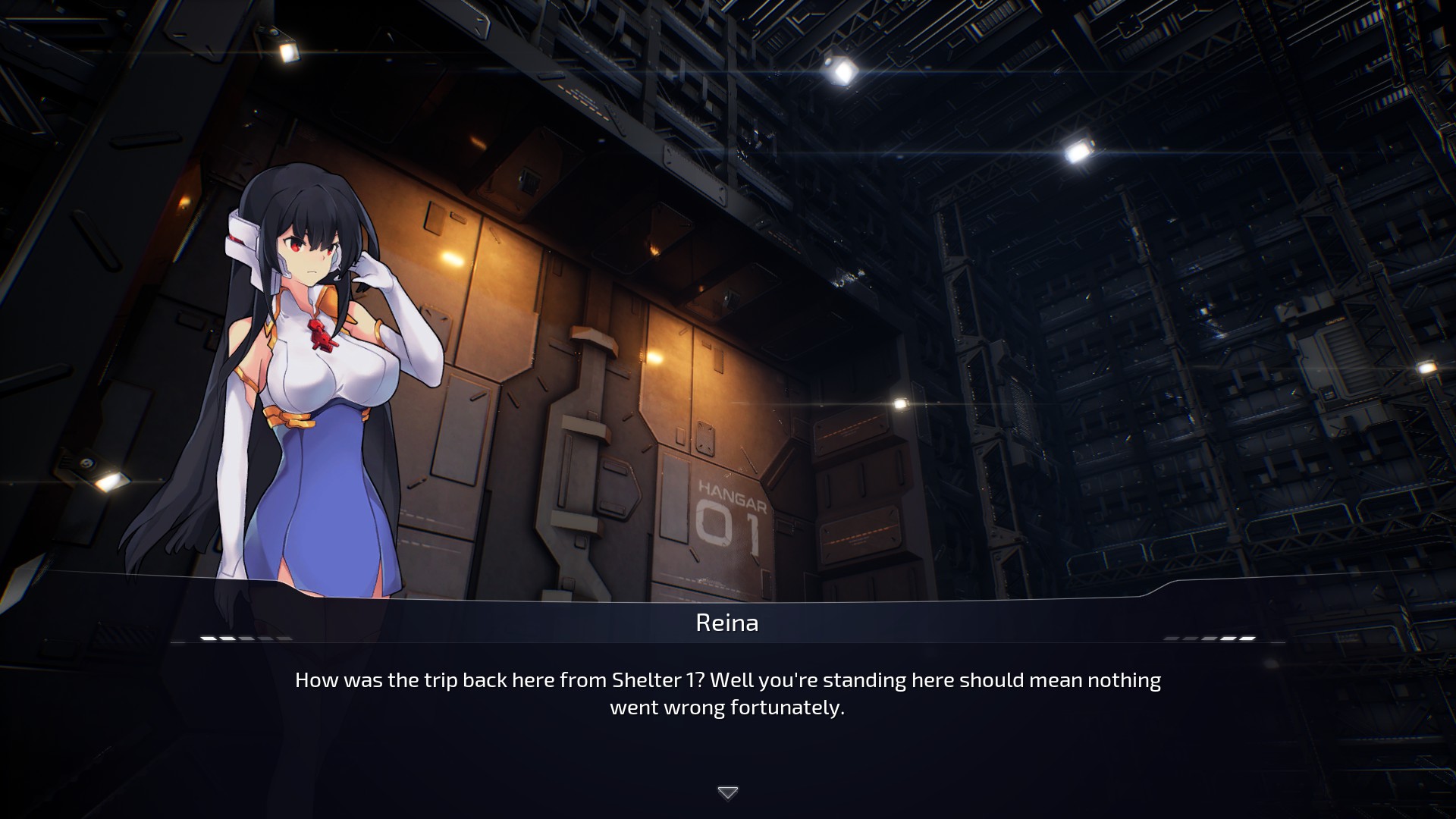 MASS Builder is shaping up to be an incredible mech game with customization that pushes the limits far beyond where they’ve gone before. Unfortunately, we’ll have to wait for a time for it to truly live up to its potential as it is severely lacking in content and due to that it is nowhere near its current asking price if you’re looking for your money’s worth. If you’re as excited to see the finished product as I am and would like to make an investment and play the early build, it certainly wouldn’t do any harm to support Vermillion Digital in their lofty goal and get your hands on an early version that’s already an entertaining experience for a handful of hours. If MASS Builder continues on the path it’s on and doesn’t give up on any of the milestones that it is seemingly trying to hit, it may just be the best mech action-RPG we’ve seen yet. 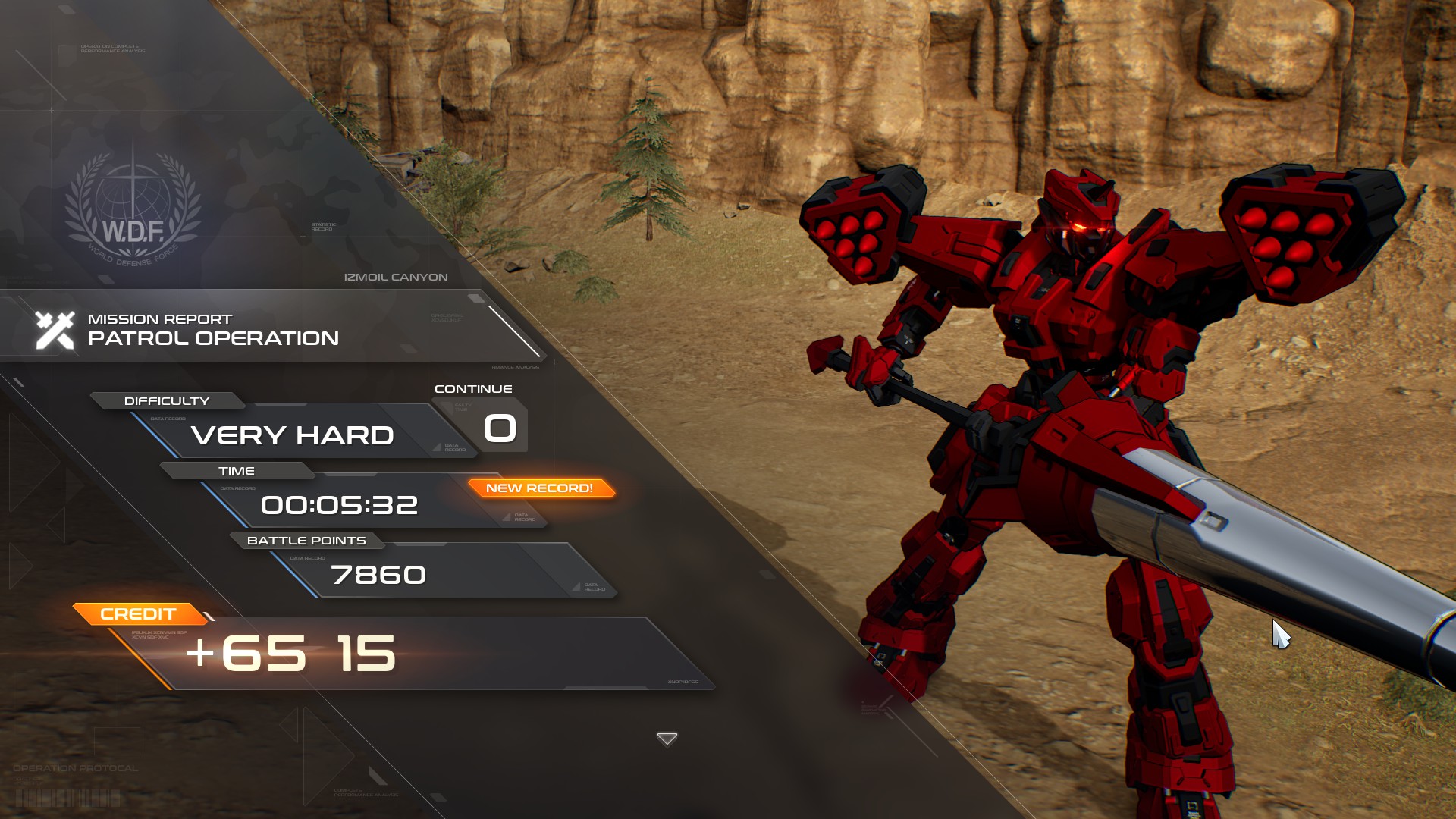