A game that doesn’t really grind my gears.

If you’ve ever owned (or even looked at) an Xbox 360, chances are you’ll have heard of Gears of War at least once. This gritty cover-shooter series is among the most popular Xbox exclusives and, dare I say, is almost as popular as Halo itself. While the series is, for the most part, exclusive to the Xbox 360 and the Xbox One, you ARE able to play the first and fourth games on PC. Back in June, Microsoft had announced their plans for the PC market, which included taking it seriously from here on out, and Gears 5 was going to be the first example. Gears 5 was released on both the Microsoft Store and Steam and has been praised so far as an incredible PC port. But do those claims hold true? Is it even a good game? 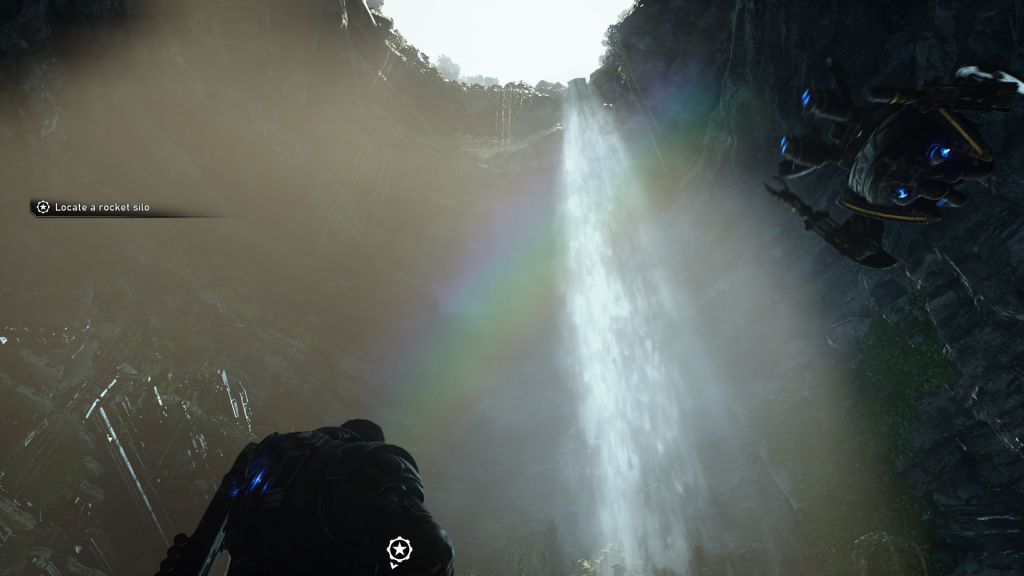 Fans of the franchise will not notice much of a change in terms of Gears 5’s core gameplay, everything plays almost the same as the previous games in the series. There are four different game modes you can choose from; Campaign (which can be played singleplayer, split-screen, or co-op), Escape (a co-op Left 4 Dead-esque campaign), Horde (a co-op survival mode), and finally Versus (a PVP mode complete with ranked for those who REALLY want to git gud.) Most of my game time upon writing this review went into the campaign, as it should. So I’ll be talking more about my experiences with the campaign than with other game modes.

Before starting the game, you’re given a full recap of the story of Gears of War 4. While it’s recommended you have at least played that game first, you won’t miss much (if anything) thanks to the recap. The story of Gears 5 follows Delta Squad once again as Del, JD, Kait, even the ever-gruff Marcus Fenix, once again working with the COG to better fight the enemy known as the Swarm. While Gears 5 starts off pretty standard, after Act One it turns into Kait’s story, taking you off onto a rather interesting path to find out the truth about her family and her connection with the swarm.

In Act 2 onward you’re given a few semi-open world areas, which is a first for the franchise. However, they prove to be rather overblown as it’s just an excuse to ride a skiff through an empty expanse. You’ll be able to go to the main mission area or change your course to explore surrounding areas, with points of interest being pointed out by a big flag. These points of interest often have one of two things; either you’ll find a side mission, which provides a unique upgrade for Jack’s tools (I’ll explain below), or you’ll find relic weapons, which function the same as their normal counterparts with some extra benefit or gimmick attached to it.

As I mentioned above, you’ll have a robot companion, Jack, that actively assists in combat. Not only can it fight on its own, but you’ll get skills for Jack throughout the story that can function as utility or offense. Throughout the game, you’ll be using Jack in far more than just your occasional firefight, too. There’s plenty of different situations where you’ll need him to get past a certain barrier.

Those of you who are completionists or just prefer to take your time to explore will be happy to know that there’s plenty of collectibles to find. You can split the types of collectibles into two categories. The first one is simple enough, there are components that are necessary to upgrade Jack’s skills and/or his basic functions. The second form of collectible involves loads of different items. Documents, pictures, hard drives, letters, while these collectibles are all different in form, they all provide little snippets of the lore to flesh out the world around you. These collectibles don’t provide any sort of benefit to your game and are purely lore-centric. 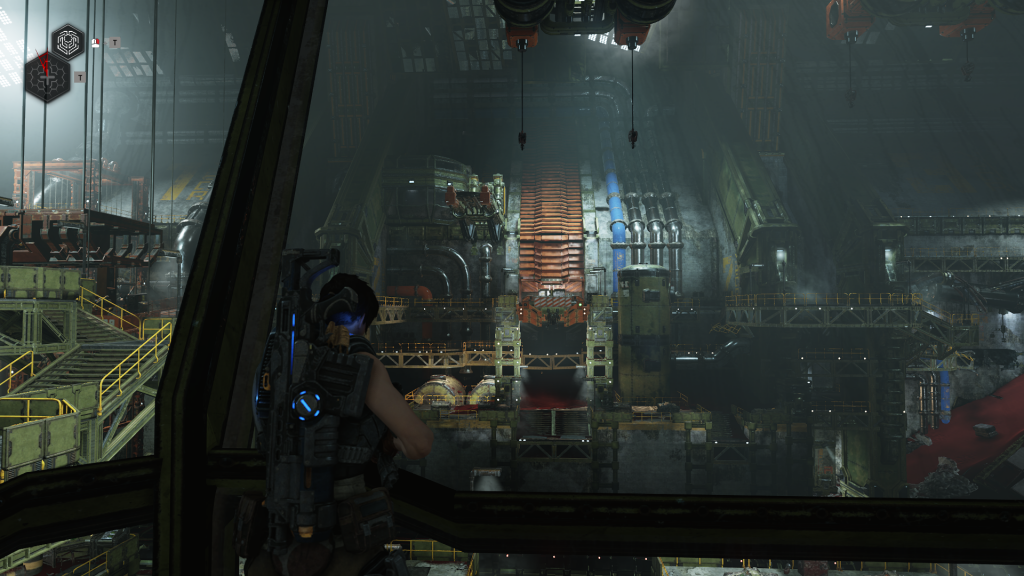 Gears 5 is an absolutely beautiful game.

One thing that really bothered me about the gritty and grim games of yesteryear is the fact that they all had a washed-out color palette. What could look like a vibrant-yet-hellish landscape is oftentimes washed out with a dull brown, green, grey, etc. Thankfully games these days are realizing that having more vibrant colors doesn’t affect the game’s overall feel, and Gears 5 is no exception. The game is absolutely gorgeous and flush with color even in the most destitute of areas. Each new area you visit has a completely different color to it. You’ll be going from a lush, green tropical environment into the cold, icy colors around New Hope. One thing you’ll notice more often than not is the blues. Whether it’s the lights on your armor or something in the environments, the blues are certainly a highlight.

When the game wants to go for a certain feel, you’ll certainly be feeling it. When there’s a large conflict going on, there’ll be fire and havoc all around. When there are more upsetting moments, the voice acting and the animations will portray those emotions fantastically. When you’re in a dark room, and things are too quiet, the lack of music or talking makes traversing the area all that much more stressful. In situations like that, you aren’t provided with a flashlight either. Jack provides the light, which gives off a cool blue glow that looks like something straight out of a horror movie. That said, I can’t tell if I’m glad nothing happened in those instances or if I’m disappointed that I didn’t get my pants spooked off… 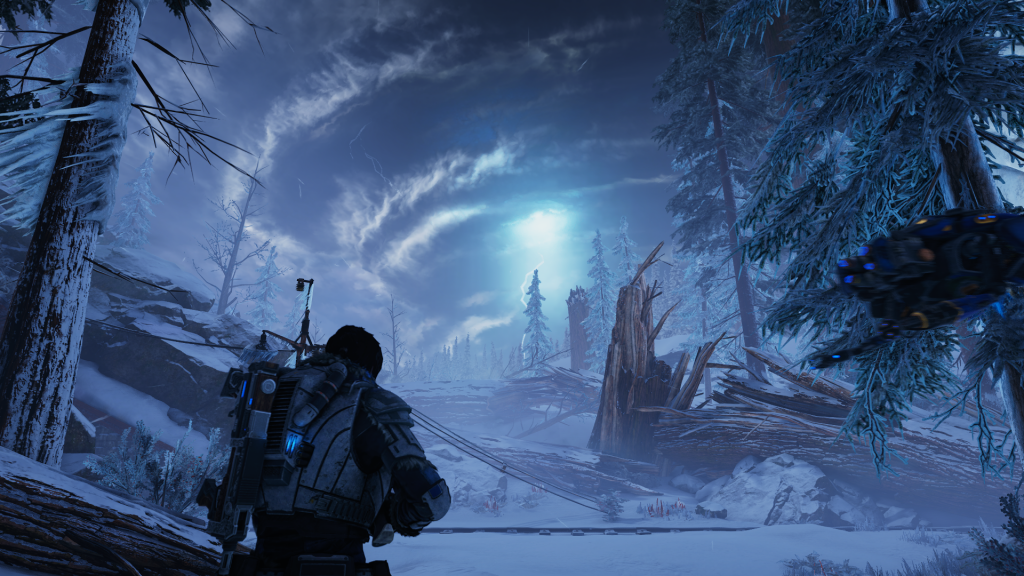 When The Coalition/Microsoft promised to make the PC port as high-quality as possible, they certainly meant it. For me, the game has been running smoothly throughout my singleplayer playthrough. From the larger, more expansive areas to the more compact areas fraught with activity, my rig managed to maintain 60 fps no matter what. The game has a benchmark feature to test if your computer really is up to the task. I consider my computer to be mid-tier, so seeing Gears 5 work perfectly AND look good is always a plus. Below is a picture of the results of the benchmark done on my PC, so you can see my specs for yourself and see if your rig can manage Gears 5.

On the technical side, fortunately, the game seems quite stable. There hasn’t been any sort of performance dips nor any crashes or technical glitches, a very welcome sight in today’s Triple-A environment. Regarding connectivity and stability involving multiplayer (PvE strictly, sorry!) it works perfectly fine. 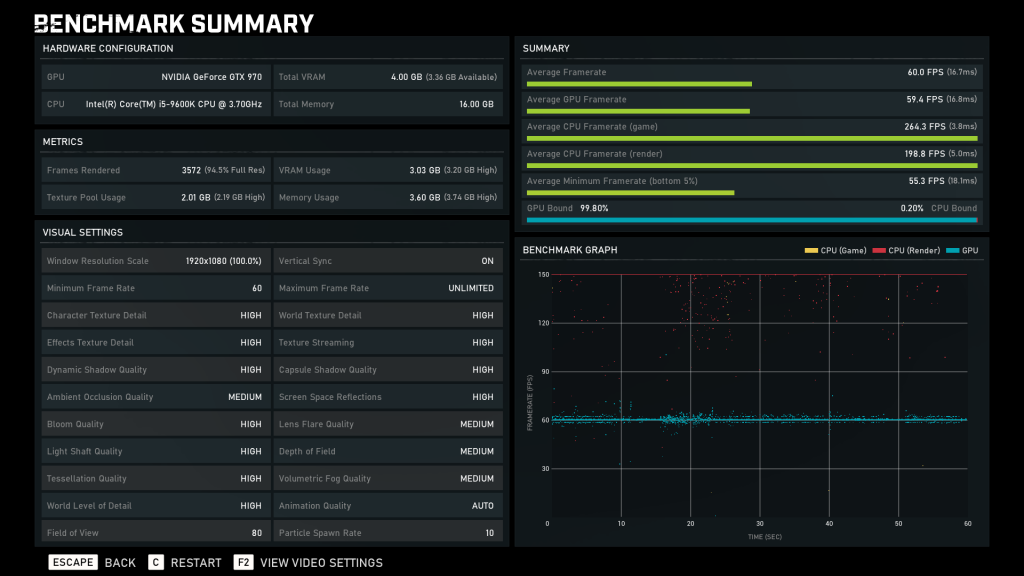 Not all gore, guts, and glory

One of the biggest problems I’ve noticed with Gears games is that the NPC companions you fight alongside can be very dumb. They can get stuck in terrain, they can die because they refuse to take cover and/or run up towards the enemy like lemmings. This problem is especially apparent in a mission in Act 2, where you have to escort Jack out of a mine. Jack will run out into the fray, leaving you to frantically gun down whatever Swarm pops in. If you happen to get knocked down, good luck getting back up. Chances are Del got stuck in some terrain at the start and cannot move. In some of these circumstances, fortunately, The Coalition put in a failsafe and had your allies warp to your location should you need more than just one person to progress. However, it can be a bit immersion-breaking seeing your allies blink into existence.

The animations, specifically for reloading, are quite disappointing. Throughout the series, failing a reload felt more impactful, the animations really did give off a feeling that the gun really was jammed. In Gears 5 however, it feels like the animations took a hit so that they could be smoothed over. Jamming a gun feels like they just don’t try hard enough to unjam it, just one quick smack and it’s good to go.

Pacing is off in certain areas as well. For example, when you are sent out to defend Settlement 2 from a massive Swarm invasion, it’s meant to be pure chaos. The Swarm are everywhere, you’re with many other COG soldiers to clear each and every area and extract a large group of civilians. Yet after every fight, when you’re given time to look around the area, everything turns quite dull. Even if you aren’t interested in looking around for more than just some ammo to restock, the music settles and the sounds of battles in the background are nothing more than a few shots in the distance every so often.

As I previously mentioned, I didn’t really care for the open-world areas. It feels like The Coalition wanted to create more of a space for people who love going out of their way to explore, yet fell flat in trying to make it interesting for everyone else. There are no potential threats when using the skiff, which is quite a disappointment when it has a minigun that Delbot (or the second player) has to mount.

One final issue I have is more a gripe than anything; Horde mode takes a long time to complete. The game mode goes up to 50 waves, with each getting obviously harder. I wound up getting to wave 30 before we eventually gave up, and that took us an hour and a half, with the waves getting longer as the enemies got more and more health. Bear in mind that I’m a big fan of co-op games like Killing Floor, and Horde just felt a bit more tedious than necessary. 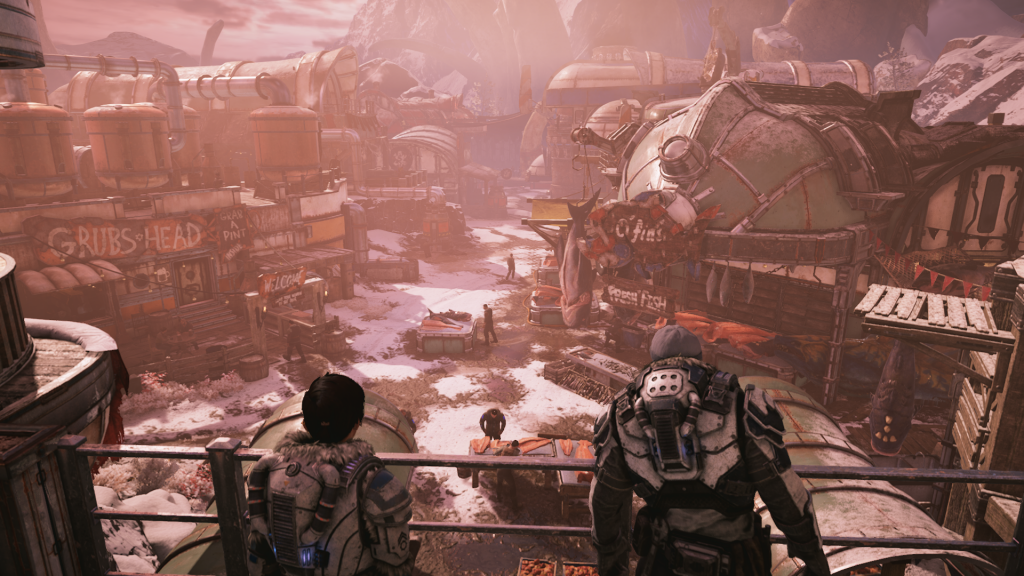 Whether you prefer playing singleplayer, going into PvE, or getting more competitive with the PVP/ranked modes, this game’s got plenty for everyone. The visuals in Gears 5 are often absolutely breathtaking, and the combat is absolutely visceral and addicting. Whether you pick it up for the typical triple-A price or play it through the PC game’s pass, it will definitely be worth your while.