ARTICLE: Amnesia: A Machine for Pigs – Dehumanization of Industrial Capital

﻿A Marxist analysis of Pigs’ reveals how the dehumanization inherent to capital industrialization serves as a foundation for its horror.

My name is Anna. I am the curator for both Malkavian Madness and Elite Gaming. I have played Amnesia: The Dark Descent and Amnesia: A Machine for Pigs (‘Pigs). I highly enjoyed both games, and although you do not need to have played ‘Pigs to read this text, I recommend doing so because it will add context. Save or Quit (SoQ) has graciously allowed me to share my essay, entitled ’Pigs: The Dehumanization of Industrial Capital with you. I hope you enjoy it!

This essay relies on two main assumptions. First, that the game takes place in a fictionalized industrial London operating under a capitalist mode of production. Second, that this imperial London is currently colonizing Mexico. Pigs’ is set during New Year’s Eve of 1899 in an alternate past of London. Even though Spain was the main imperial power behind Mexican colonization during the 16th century, Great Britain had its share of imperialist ventures to Mexico while it was not busy invading, colonizing, and occupying the rest of the world. For instance, Spain and Great Britain’s military invaded Mexico to help France establish a puppet emperor in Mexico in what is known as the Second French Intervention in Mexico. Thus, it is not unreasonable to assume this fictional London was colonizing Mexico during the game’s timeline.

Mandus is a wealthy industrialist who becomes deranged by capital. Pigs’ is likely a sequel to The Dark Descent set at the turn of the twentieth century, about 60-years later than its predecessor. This piece of context reveals that the industrial period serves as a foundation for the plot in ‘Pigs. Developer Pinchbeck describes it as a “mechanized world …[with] a bustling cityscape.” Later in the same interview, he states:

By catapulting the game into the industrial period…  instead of magicians, we have the early capitalists and empire builders. What would they make of this supernatural stuff if they got their hands on it? And that in itself is such an interesting thing to play around with.

Thus, we enter a Dickensian London in Pigs’. As we try to mitigate our amnesia, we traverse a poverty-stricken London filled with the sounds of sick citizenry, the smell of inefficient waste disposal, and the consequences of an overall terrible sanitation conditions. We see a sky is filled with thick, chemical smoke, and the roads are broken. All of this as a result of capital development. But there’s something more amiss. For instance, what does developer Dan Pincheck hint at by posing the question: “What would they [early capitalists and empire builders] make of this supernatural stuff if they got their hands on it?” 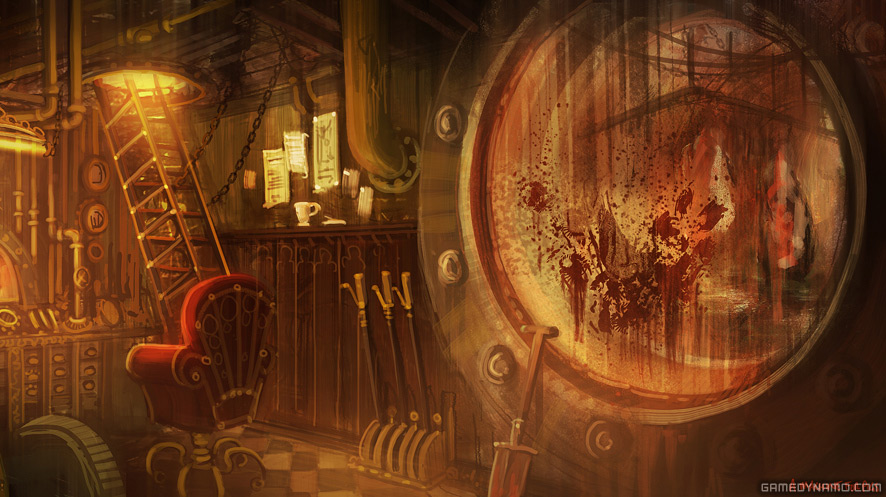 The narrative behind Mandus, Pigs’ protagonist, serves as a metaphor for Marx’s economic criticism of capital production and development. Firms will develop with the sole goal of increasing profits. However, as firms compete, each individual firm begins to employ tactics that reduce costs and increase profits. In other words, they employ supply-side economics. Firms cut wages, disregard health and safety concerns for workers, and fire employees to reduce the cost of production offset by a higher profit margin.

However, workers comprise society’s consumer base. Thus, if workers suffer enough poor conditions, such as lost wages, work-related accidents, and health hazards, there will be no consumer base left to purchase the firm’s products. In the end, this would result in a declining rate of profit for the capitalist. But alas, we are in ‘Pigs, a fictional industrial London with Magick. So, as Dan Pincbeck mentioned, what would the early capitalist do with such Magick?

The personal story of Mandus is representative of a firm operating under the capitalist supply and demand model. The goal of any firm is to make a profit, and the lower supply costs (i.e. lower wage), the more profit he can make per unit of capital invested. (Hint: that is why slavery was the economic foundation of the American agricultural South). As Mandus, operating as a wealthy capitalist under a competitive firm model, see his profit decline, he seeks a supernatural force that will reduce production costs to zero while still maintaining a steady output of products and an increasing rate of profit. That is why at the beginning of the game, Mandus wakes up from a severe fever that has lasted a few months.

Whether he fell trap to a Mexican poisoning, or whether he was cursed by the Aztecs, Mandus is beginning to suffer from his sins. He turned to unconventional ways of cutting costs, steals Magick from the Aztecs, and accepts the capitalist faustian bargain.

At first blush, the videogame relies upon the dehumanization inherent to industrialization as a foundation for its horror. Its backstory reinforces this point: a well-meaning industrialist, Oswald Mandus, spends the bulk of his fortune on livable wages and safe factories, only to find that his prices are no longer competitive, his profit margins are non-existent, and he is in danger of losing everything. After discovering more unconventional ways of cutting costs (i.e., magic), Mandus becomes consumed with creating a grand machine that will cure the world of its inherent suffering.

The Aztec Pessimism of A  Machine for Pigs, by Sam Zucchi

At one point the Engineer, a decoupled part of Mandus’ soul engraved in the machine, tries to persuade Mandus’ not to destroy his flesh-fueled apparatus by warning him of horrors to come:

I have stood knee-deep in mud and bone and filled my lungs with mustard gas. I have seen two brothers fall. I have lain with holy wars and copulated with the autumnal fallout. I have dug trenches for the refugees. I have murdered dissidents where the ground never thaws and starved the masses into faith.

Here, the game is doubling down on its display of the inhumanity of industrialization. As Sam Zucchi also points out, “mustard gas requires a chemical industry, while the autumnal fallout of Hiroshima [and Nagasaki] required a total war economy. Pigs’ avoids the optics of Western capitalist civilization by showing the horrors that industrial capital will do in its insatiable search for more, and more profit. Sam Zucchi continues, “The logic of industrial capitalism then becomes indistinguishable from driving sacrifices up the steps towards the stone altar.”

In the end, this supernatural power, stolen from a colonized society, drives Mandus to his grave. The society around him also crumbles – the workers turn into pigs, the infrastructure crumbles, and the people become ill. The Engineer’s quote is illustrative of Sam Zucchi’s point, in effect, that industrial capital inevitable leads to war, death, and deceit.

When asked “Why Pigs?” implying why he chose that animal for the title, Pinchbeck responded: “Well, A Machine for Sheep wouldn’t really work,” and after a while said “…it’s [pigs] a smart animal that we [humans] kill. In vast numbers. And that’s really a nice metaphor.”

The horror of sequels – the Chinese Room on Amnesia: A Machine for Pigs

I believe this is the single most important lesson from Pigs‘. Industry makes pigs out of us, and then kills us. Pigs are a victim of gross industrial capitalism. Pigs live in the darkest corners of Mandus’ industrial empire, serving as a metaphor for exploited labor (another metaphor for this is the fact that the machine requires human sacrifice to continue existing – do you see it?) Industry requires human exploitation to survive. Pinchbeck laughs, and Curry, a fellow developer at the Chinese Room replies: “[a] Machine for Cows sounds really unfrightening.” I suppose it does Curry, I suppose it does.