What do you get when you combine a simulator with a puzzle game and a text adventure, and then wrap it up in rogue-like clothing? Nauticrawl, a game that isn’t quite sure what it wants to be. It tries really hard to provide an entertaining experience to gamers in a market over-saturated with rogue-likes and rogue-lites, but can be frustrating and overly complex. 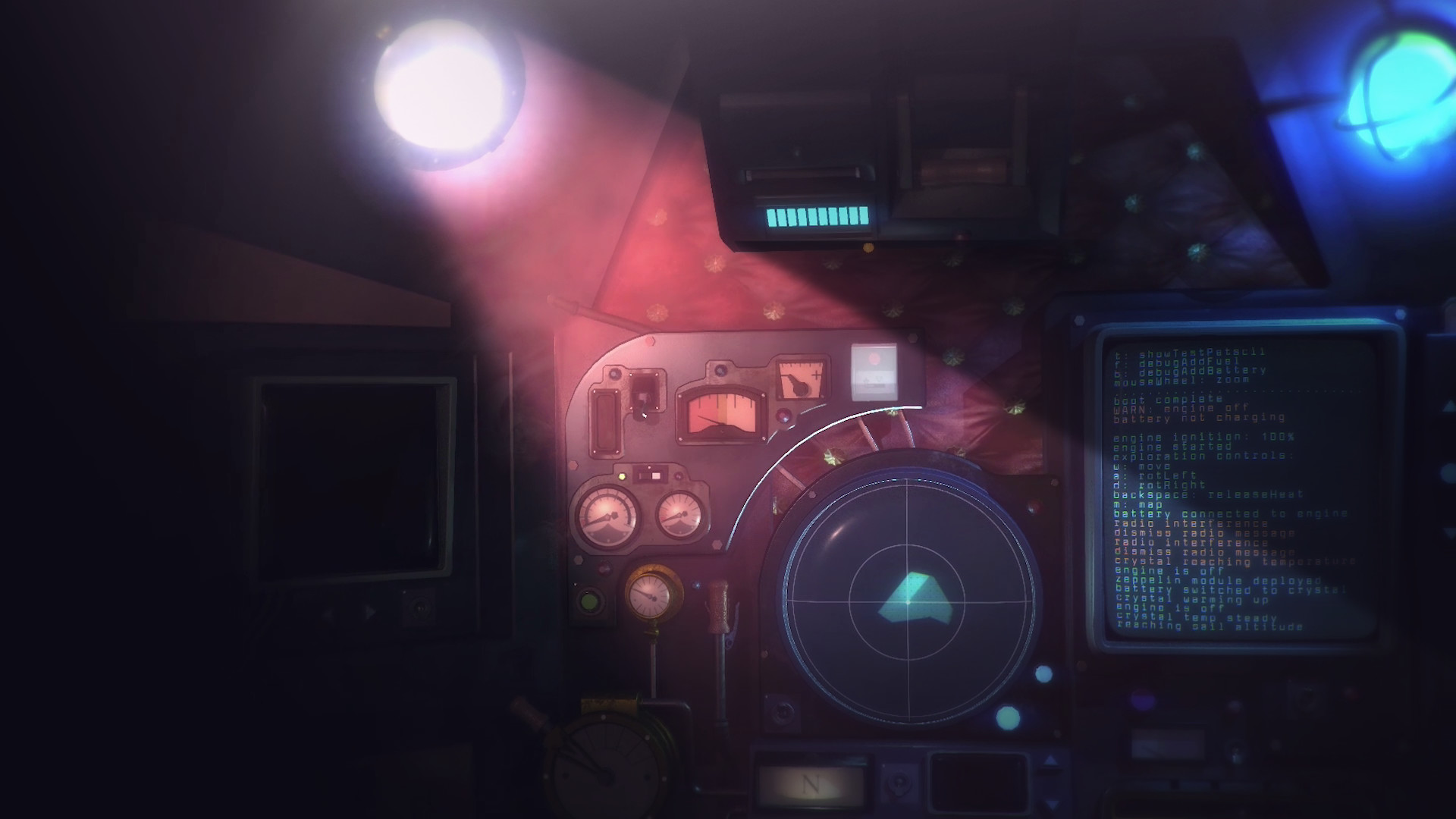 Nauticrawl doesn’t show much, but what it does show ends up looking pretty good. There’s a lot of detail in the cockpits, and although the video and RADAR displays are meant to be low-res, they still fit the theme well. The almost cartoon-like intro and title screen are nicely done, but seem a little out of place as they have a very different feel from the rest of the game.

Graphical settings are extremely limited. There’s a quality setting that features such nondescript terms as “good,” “balanced,” and “low” and an option to choose your screen resolution. There’s also a brightness setting (which I needed to turn up all the way).

Admittedly, a lackluster options menu isn’t entirely surprising for a game built on the Unity engine. However, I wish there had at least been an option to turn off the weird distortion effect, which made reading text somewhat difficult unless I zoomed all the way in. 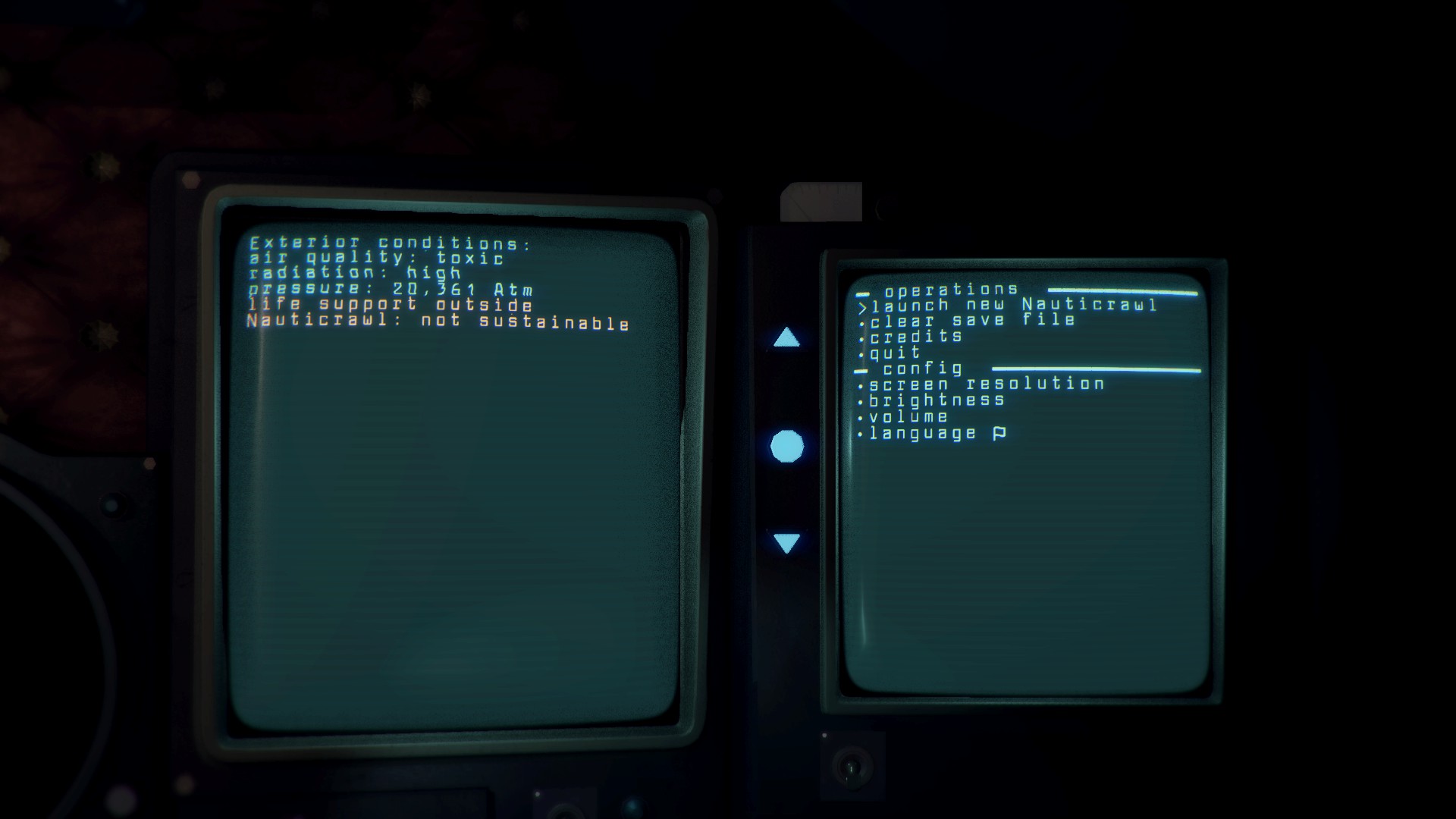 Sound was decent, but there’s not a whole lot of it. You mostly hear mechanical noises, which makes sense given the scope of the game. Overall, there was nothing unexpected or particularly noteworthy.

Music is rare, but does play every so often and when it does it fits the theme of the game. Personally, I’m okay with this as I usually turn off music in games because I find it distracting.

That said, it’s a good thing (in my case) that music is sparse because there’s one volume slider for both sound and music. I strongly dislike it when developers do this. I want the option to choose how loud sound effects and music are independently of each other, and a single slider means I either get everything or nothing. 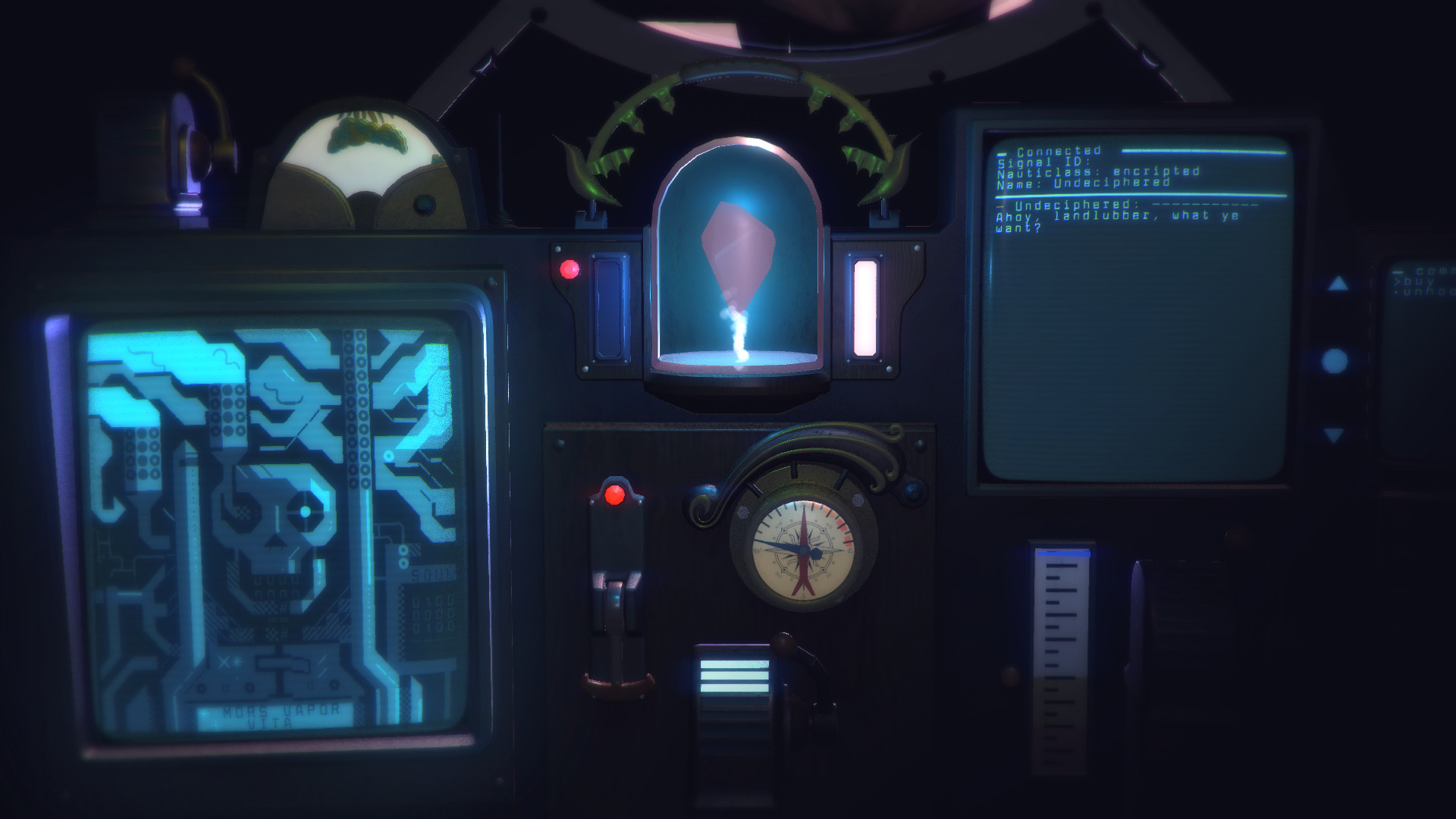 The bulk of Nauticrawl’s gameplay involves a combination of turn-based actions while constantly adjusting the settings of your vehicle.

Knowing what adjustments to make and which button to push or which lever to pull is extremely important. You can’t even begin the game until you’ve completed a laboriously complex multi-step start-up process, where failing requires you to eject and start over.

I’ve played literally hundreds of simulators over the years and no matter how complex, they all had one thing in common: they came with some sort of guide or reference material.

Anyone who’s played a vehicle simulator would likely recognize many of the functions and even some controls. This is what helped me figure out the nauticrawl’s control scheme quickly; but it’s a mistake to assume the player would have that background.

I feel that requiring players to engage in a trial and error process simply to start their game is a mistake. Sure, some people will love it, but I think it’s a good idea to at least include an option for tool tips when hovering the mouse over the controls. This would let new players know what everything does, but still require them to figure out how to run their nauticrawl on their own.

What’s really interesting about Nauticrawl is that even though everything is turn-based, the game gives the impression that it’s not. For instance, when an enemy tower locked onto me as I was attempting to pass it, I immediately saw a bright red line going from that tower to my vehicle on my RADAR. When this happened I quickly adjusted my nauticrawl to go into stealth mode (something I should have done ahead of time) thinking that I had to move fast or I’d be attacked.

I didn’t realize it at the time, but I could have sat there for hours and nothing would have happened unless performed an action. That would’ve given the tower a turn to act against me.

The only time I noticed anything important happening in real time was when I was hacking. A meter appeared on one of my monitors showing me how much time I had left until the enemy was alerted to my presence.

Get ready to read walls of text on the cockpit’s displays as well. In fact, there’s so much text that some people have compared Nauticrawl to a text adventure.

The text not only gives relevant vehicle data, but also cycles through inventory items, reads messages, and interacts with the outside world. The last point is important because nearly all interaction with anyone outside of your nauticrawl is through text.

I feel it’s worth noting the heavy emphasis on text-based interaction because most modern games don’t do this. I grew up on adventure games so reading lots of text was no big deal for me, but this facet of Nauticrawl might be off-putting for players with limited attention spans or who aren’t used to reading as much in games.

Just when I felt Nauticrawl was getting repetitive, I managed to acquire a modification that allowed my nauticrawl to become a zeppelin with a new control interface. Like the original nauticrawl control panel, there was no explanation of what anything did, but there were fewer levers, so it was much simpler to figure out and operate successfully.

At this point, the game really changed. I was able to contact other people in the world, such as traders, and set coordinates to fly to new areas. Once arriving at these new locations, I could descend and resume my progress in my nauticrawl.

I’d like to say that I’ve finished the game and seen the ending, but I haven’t. I keep dying and because this is a rogue-like, that means I have to start over at the beginning. At least Nauticrawl offers a “save and quit” function so I can stop playing whenever I want, so I may yet be able to beat this game. 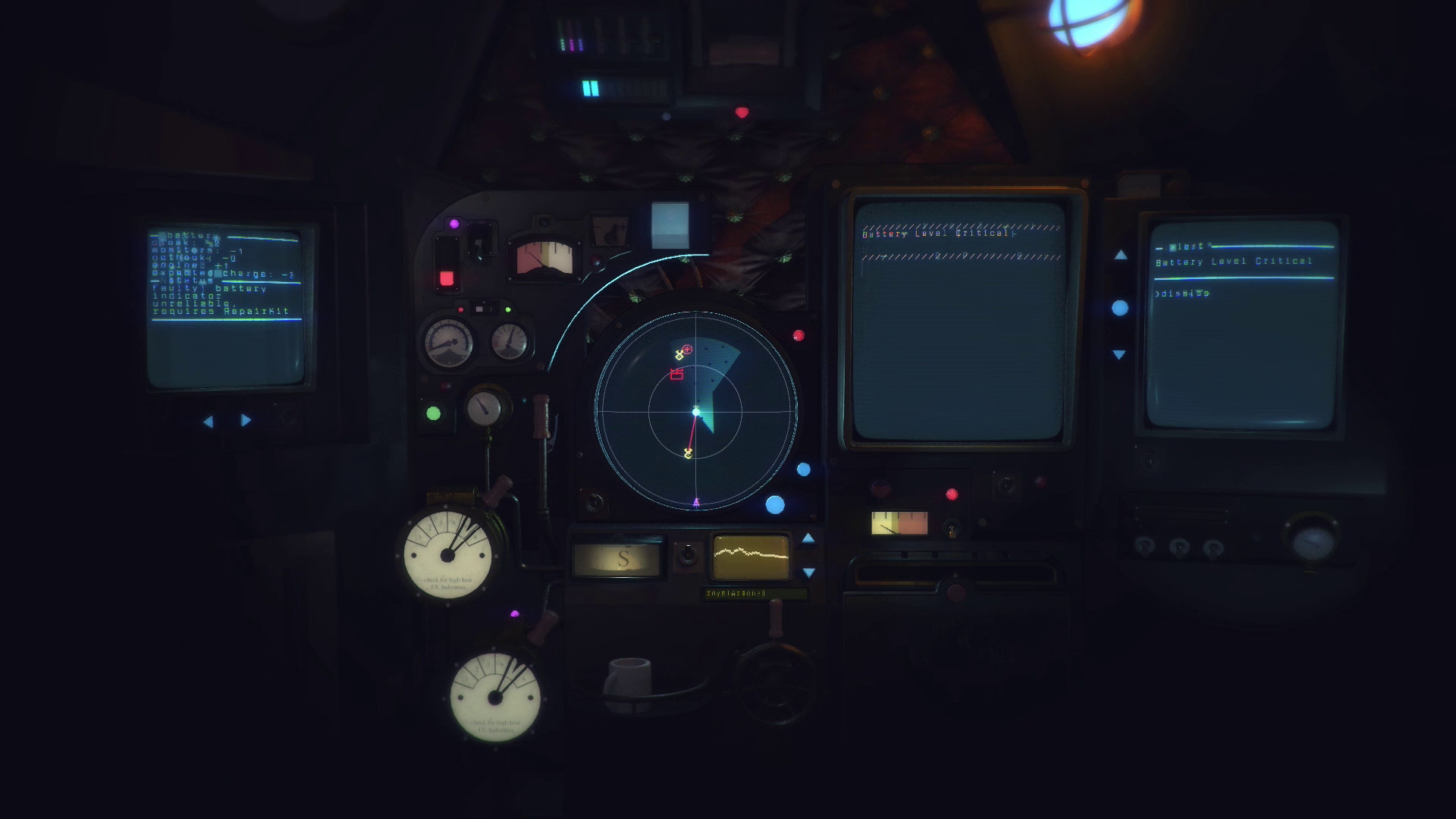 Nauticrawl does not have a well-developed story, but an interesting premise. It has us taking on the role of someone who’s stolen a nauticrawl. This is a major crime considering that nauticrawls are designed for the ruling elites.

This is also the game’s explanation for our character’s unfamiliarity with the controls of a nauticrawl, but I still think it’s a dubious explanation at best. Maybe nauticrawls are the only way to escape, but I wouldn’t knowingly steal a vehicle I had absolutely no idea how to operate.

In addition, the rogue-like game mechanics mean we play a new escapee every time we die, so while we — the player — learn from our mistakes, the character we’re playing technically hasn’t. I can’t help but feel that’s a form of meta-gaming, but maybe I’m overthinking the situation.

With a name like Nauticrawl, you’d assume this game takes place in or under the water, right? Well… maybe. The details are never fully explained, and much of the game is dependent on the player’s own interpretation.

As far as I can tell, the atmosphere is incredibly dense and shares qualities (such as extreme pressure) with deep sea environments on Earth. This is why getting out of our nauticrawl would crush us. That doesn’t mean we couldn’t be underwater at times, and indeed, the start screen is ambiguous in that the ground could be grassy hills or a wavy ocean.

The one issue I have with potentially being underwater is RADAR wouldn’t operate effectively underwater, but SONAR would, yet Nauticrawl uses RADAR. This could be a purposeful design choice or maybe RADAR works differently in Nauticrawl than in reality, but if we take technology at face value, RADAR doesn’t make sense underwater. 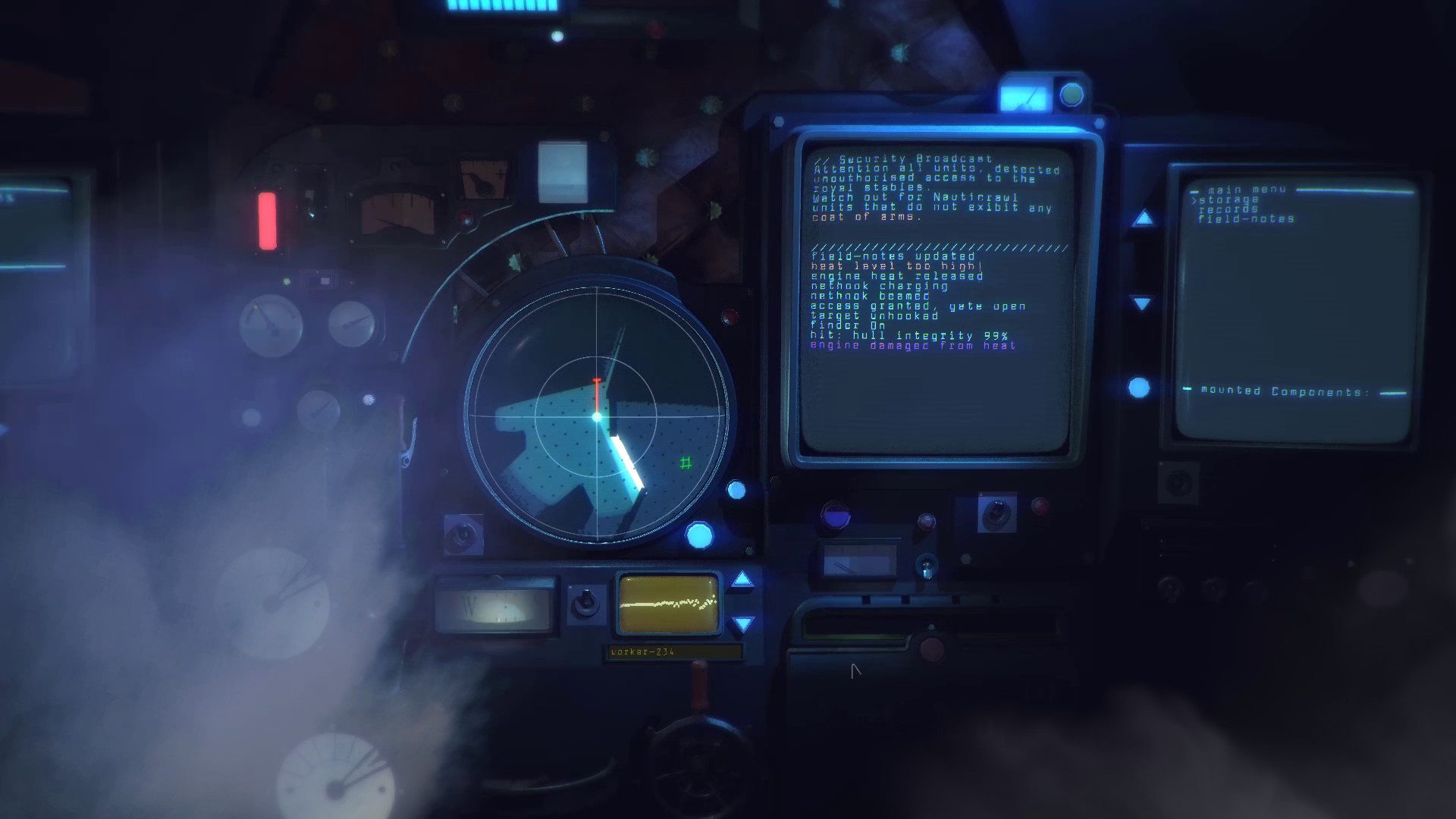 I like Nauticrawl. It’s an interesting and somewhat unusual game for a rogue-like. Most rogue-likes (in my experience) involve frenetic action, but Nauticrawl is much slower-paced and revolves around exploration and planning your moves before entering into a potentially hostile situation.

That said, Nauticrawl has many faults. Despite quickly figuring out what to do, I think the amount of trial-and-error when attempting to activate your nauticrawl is unnecessary. Not everyone has simulator experience or is good at puzzles. Perhaps difficulty options would alleviate this problem.

Limited interaction with the world outside the nauticrawl might be a sore point for some as well, although those usedto simulators likely wouldn’t see this as much of a problem.

Probably the major issue I have with Nauticrawl, however, is the lack of story. I don’t know why I’m doing this (apart from stealing the vehicle and trying to run away) or the background of the world this game takes place in.

I don’t expect to know the whole story right away, but I should have enough story when the game begins to give me a reason for my actions, and then perhaps gradually move the story along as I pick up new information along the way. Nauticrawl doesn’t have this and makes the experience feel somewhat hollow for me.

Overall, I think Nauticrawl is worth picking up, but strictly on a “Save For Later” basis. Having said that, if you love rogue-likes purely for the gameplay and story is a secondary consideration, then by all means, grab it immediately. However, if you’re on the fence about it, I’d recommend waiting for a good sale.