Combination of Enter the Gungeon and Stardew Valley? What? How does that even make sense?

Atomicrops came as a surprise to me. A friend of mine told me about it, and I have to say, I was moderately baffled at the idea. I imagine most players will be, upon first seeing it. He described it as a combination of Enter the Gungeon, and… Stardew Valley? What? How does that even make sense? I’ve seen so very many games that do their best to smash two unlikely genres together, but… twin-stick gameplay and FARMING? Seriously? I just had to see this for myself. And I gotta say, it’s been quite the trip so far. Atomicrops does a lot of interesting things, but also comes with a couple of rather nasty flaws. Let’s explore just how this all works a bit. 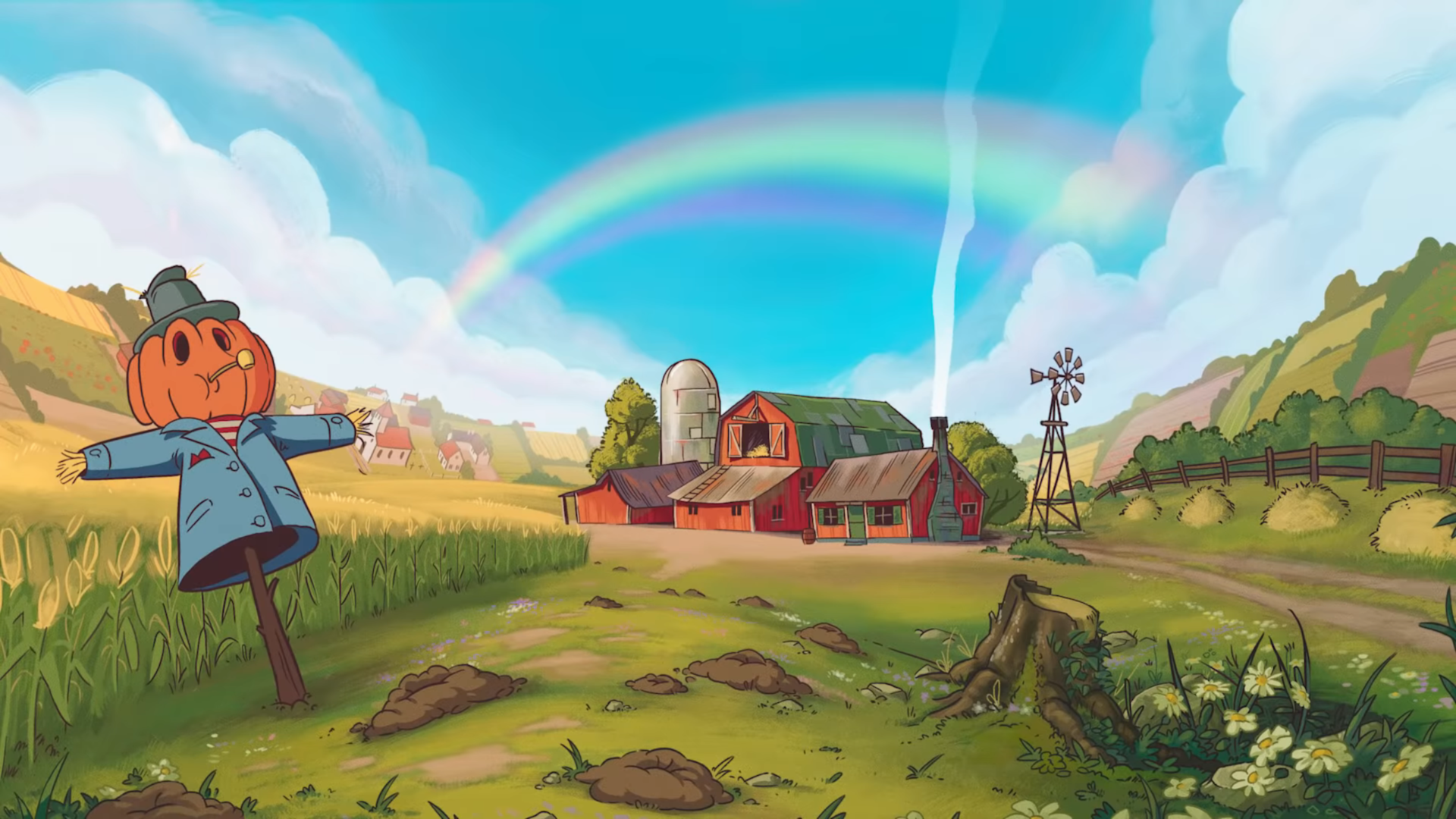 Now, firstly, a lot of people have a tendency to look at things like graphics and music before anything else. I prefer not to dwell on these subjects myself… you could hand me an ancient Atari 2600, producing pixels as big as cats, and I’d be happy. But fear not, modern gamers, as Atomicrops is lacking in primitive cat-pixels. Though it does use a pixel-art style… which some people will be put off by. For those that like pixel art though, you’re in for a treat, with the game’s bouncy, well-animated characters and flashy enemy attacks. And overly excitable crops.

Ah, yes. The crops. Here we come to the part that makes this game into the strange chimera that it is. Like many farming games, the game is split into a full year, consisting of all 4 traditional seasons. Nothing funky there. Each season consists of exactly three days, which is a bit unusual. And like any farming game, planting, watering, fertilizing, and harvesting crops is your real goal. Get the biggest yields, reap the biggest rewards. It works about as you’d expect. Until the bunnies come. This crazy world is inexplicably plagued by murderous pink rabbits and the many other strange beasts that work alongside them. They seem to think that your farming is some sort of horrible crime, and the punishment is lots and lots of bullets. At no point are you simply allowed to sit back and relax as you tend to your farm. No sir. You’ll have to tend the farm AND dodge and weave enemy projectiles at the very same time. Particularly at night, when the enemy waves start attacking your farm one by one with the intent of flattening the crops you worked so hard to grow. 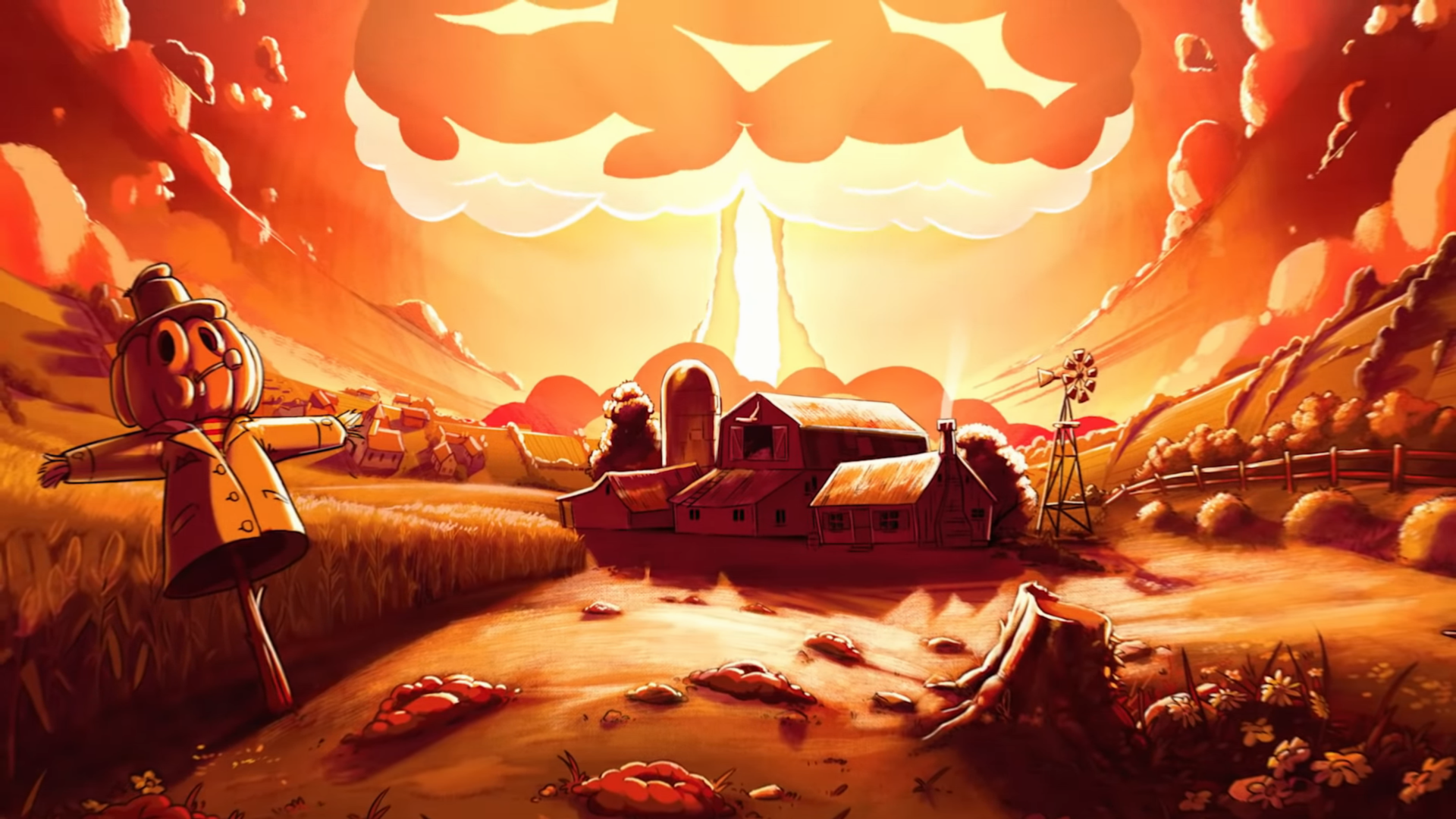 One way or another though, you still gotta get that farming done. The actual mechanics of farming are fairly simple. You can remove weeds, till the soil, plant seeds, water, fertilize… the usual. The controls for these things are all quite simple and context-sensitive. Watering, in particular, is easy… all you need to do is make sure your watering can or whatever it’s supposed to be has water in it, and it sorta just automatically sprays in the general direction of your crops, though it can only hit one at a time. Fertilizing, which seems to require meat blobs from dead enemies, is equally easy to do; stand near the crops and hold the button down to wildly fling fertilizer at them. Fertilizing is important if you want to make the big bucks, but again, lots of combat and rabbit blasting is required to get any. There are quite a number of different crops for you to plant, but most of them aren’t particularly special… just worth different amounts of money, and sometimes being a bit different in how long they take to grow or how much water they need. The big exception is roses, which I’ll get to in a moment. In addition, for all non-rose crops, if you plant a block of 4 of them and fertilize them properly, they sorta smash together to form a gigantic version of whatever plant they result in. These mega-crops are where the real money is, so going after those is a priority. However, this requires precise planting, and that can be a problem when dealing with random rabbit attacks. It doesn’t help that selecting a patch of ground to work with is… awkward, at best. All too often the game seems to decide to target a different dirt patch than the one I want to do something with.

So, what do you do with all of the money you earn, then? Well, at the end of the day, you are taken to a small town. Various vendors here sell a variety of things, like guns or more seeds, or piles of wood that allow you to explore different areas by repairing bridges. Once more of the town opens up, you can buy more advanced things like tractors, crazy giant gizmos that do all sorts of loopy things, but which are horribly expensive to buy, so it’s a much better idea to just explore the region and hope to find one. Some vendors only accept roses as payment though, which are much harder to get. This includes the guy that sells healing items. And you’ll probably need these often, as healing is incredibly rare outside of the town. Best to not get hit at all, eh? As you advance through the run, new sections of the town can open up and more stuff can be accessed. 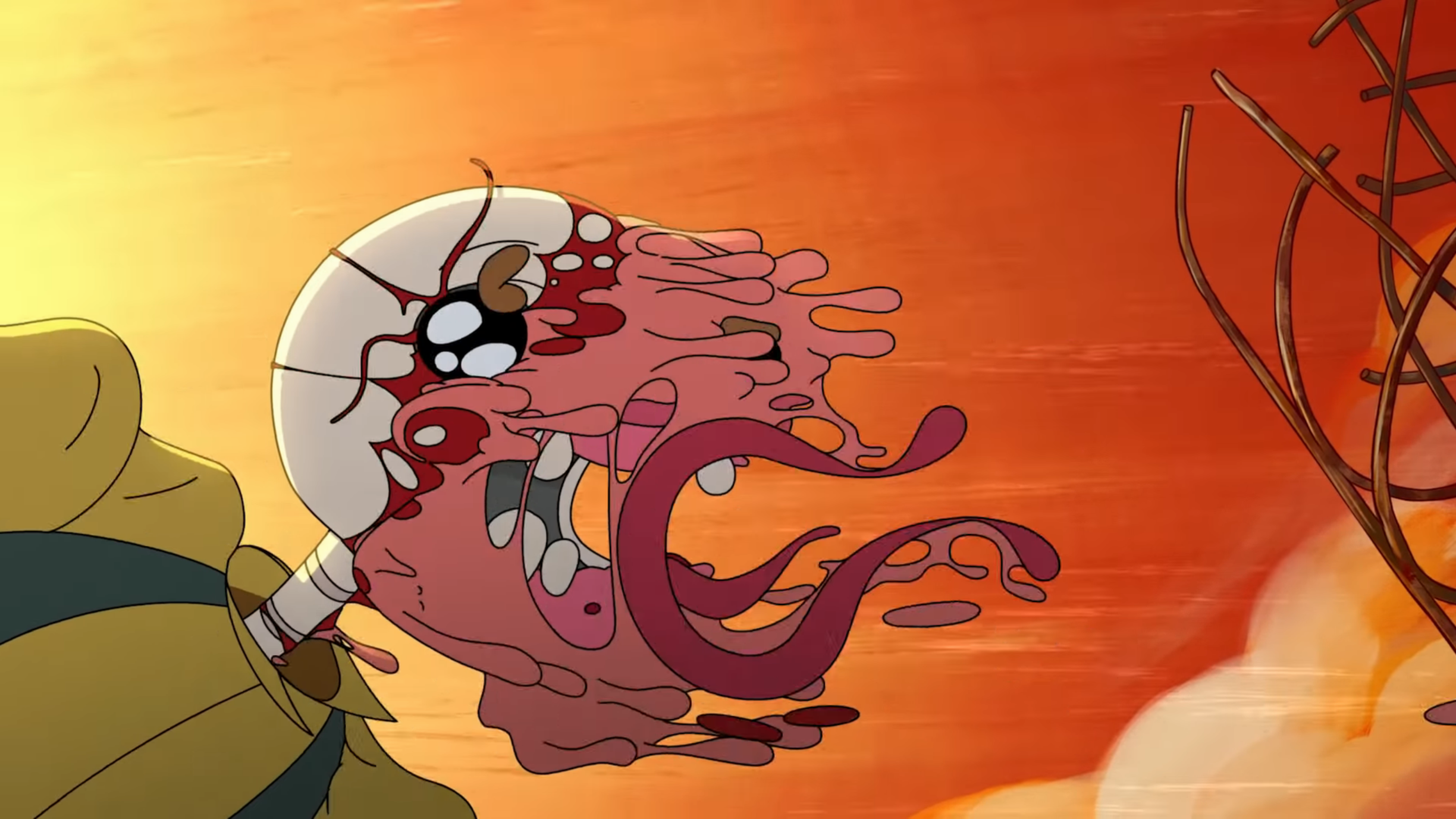 You can also find items in the big fields that are adjacent to your farm. These are where the horrible death-rabbits have set up their camps, and where associated other monsters roam. Attacking these camps is the primary way of getting seeds or items or whatever outside of the town. You can even find farm animals… which wander around performing various tasks for you… or scrolls, which produce powerful effects that are usually farm-related rather than being things like summoning boulders or whatever traditional magic scrolls do. In general, there’s a lot of stuff to find in these places. But… here’s where we come to the game’s first big problem: The time limit. The very STRICT time limit. See, each day, after a very short “dusk” period, you have exactly three minutes to do stuff. Sometimes that stuff is farming, but much of the time it is running out to those far-off fields to fight for seeds and things. Did I mention the bit where it’s only three minutes? Now, I hate time limits in games like this by default. The concept just never sits right with me, and I know plenty of other fans of this sort of game feel the same way. But this is one of the most strict time limits in a game like this that I can think of. I found that it often was more irritating than challenging, and it made it so that I often just did things at random rather than carefully considering the choices the game presented me with. Did I defeat a camp, and am now being presented with a choice of items or animals to grab as a reward? Sorry, don’t have time to choose, just grab whatever that is, gotta run, no idea if it was a good choice. Heck, often no idea of what it even was. I found myself often surprised to then find a cow or chicken back at the farm… I’d just spastically grabbed rewards as fast as possible without considering which to grab or even taking the time to see what they were. Super-strict time limits will do that. And you cant use that entire 3 minutes to fight and loot. An annoying amount of it is required simply to run back and forth between your farm and the enemy fields. But there’s one other thing that compounds this.

…it’s your gun. One of the most bloody irritating things that can happen with this genre is when a game hands you the equivalent of a pea-shooter and expects you to spend a lot of time with it. Enter the Gungeon did this a lot too… NOBODY likes playing that first floor in that game. It’s dull and it takes absolutely forever due to the starting guns being a special level of pathetic. It’s not that much different in Atomicrops, though enemies are far less tanky in this game. However, Atomicrops takes it one step further. The guns that you can buy in town, well… remember the disposable, short-lived weapons in the most recent Zelda game on the Switch? They aren’t THAT bad, but they still make me think of those every time. Any gun you buy, no matter which one, will last exactly one day. Just one. Then, without fail, it will shatter, and you’re back to the sadness shooter, unless of course you buy yet another one upon breaking. If there is a way to prevent guns from breaking, I haven’t found it. Which then makes battles with enemy camps take forever, and you sure don’t have “forever” to spend on them. Even worse if you happen to be stuck with that horrid thing during the boss wave that occurs on every third day. Now, perhaps expert players can keep constantly buying guns over and over… I don’t know. I never managed anything close to that. My playstyle in this genre is the direct opposite of the speedrun-esque style that this game demands of the player, so that didn’t exactly mesh too well. If you tend to have a similar playstyle in this genre, expect some frustration with this one, because it just doesn’t allow for any other playstyle. 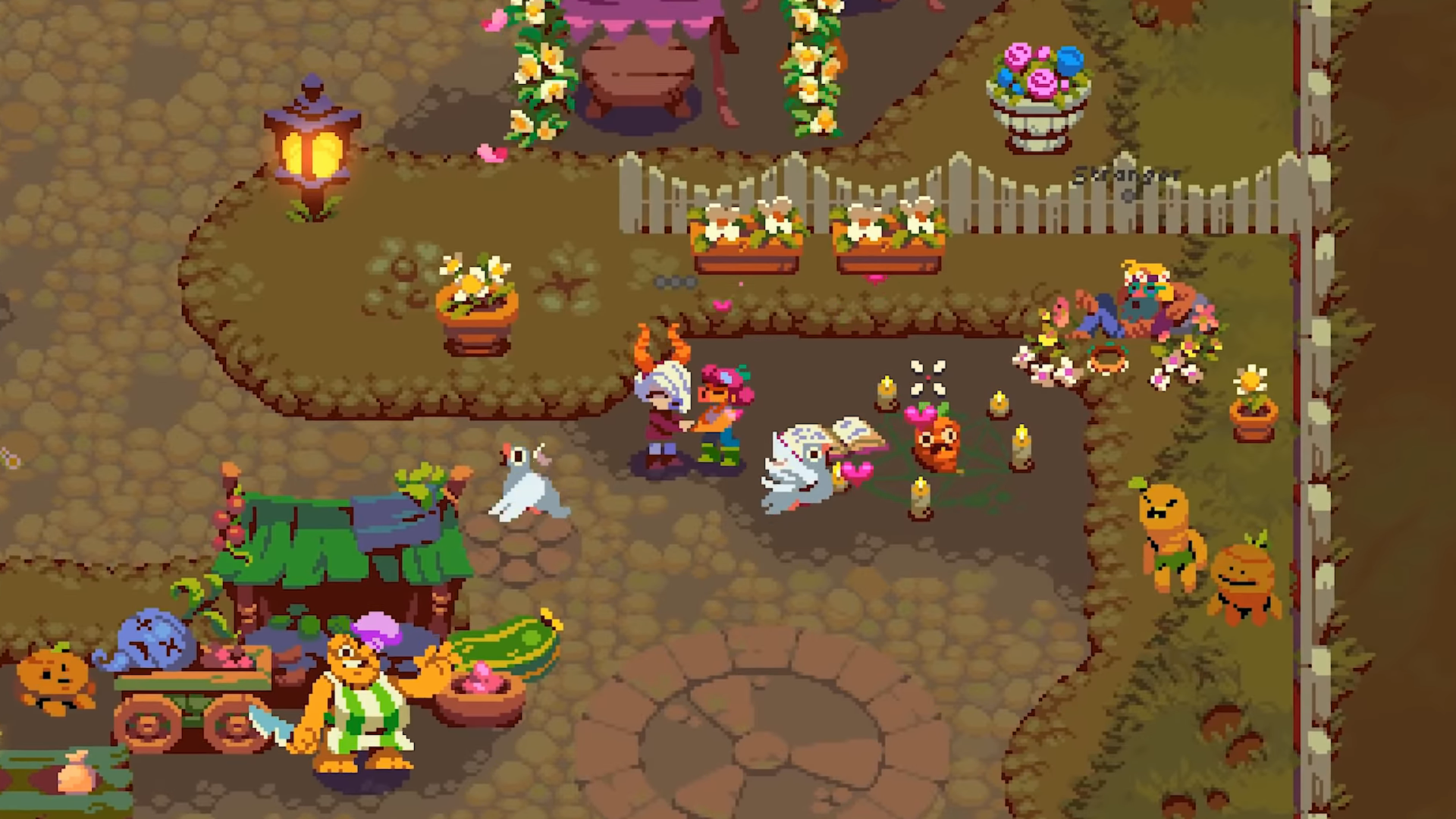 Overall, Atomicrops is an interesting beast. There’s quite a lot of good stuff going on here, and this is one of those games where… despite those problems… I keep ranting to friends about it. “You guys gotta try this”, I say. And even though my time playing this for the review is done, I do think I’ll be sticking with it as development continues. Problems aside, I’ve been having a darned good time with it, and hopefully, you will too. The game is quite a long while from done, but I think it has the potential to be something truly special.