Attack on Titan… in Greece

Zeus Begins is a basic Beat’em Up akin to classics like Streets of Rage, Final Fight, etc. with a few Shoot’em Up segments spiced on top of it. Boasting with Sprites and obligatory palette swaps.

The Story: I am the god of sky and thunder! 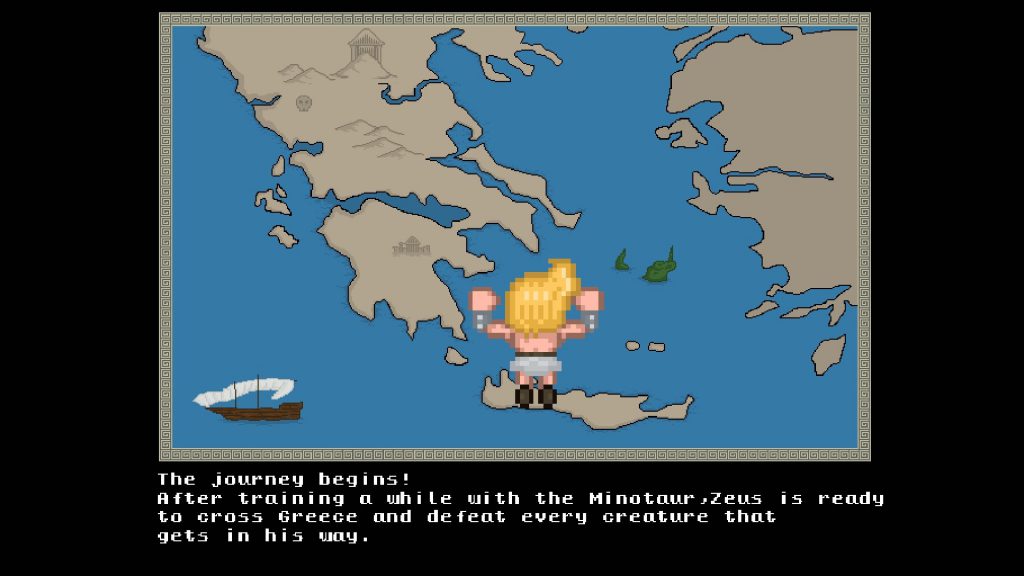 The Titan Chronos ate his brothers and sisters. Escaping from his clutches he trains on an island far away until the destined time arrives to save his siblings and that time is now. With an unlimited aggro, Zeus starts from the island and heads out to face the world. Beating up and shooting up soldiers, female domina soldiers, athletic domina soldiers, harpies and mythical Beasts it’s like whole Greece hates him. Yes, you even head to the infamous underworld.

Strap onto your controller. This is going to be a basic ride. 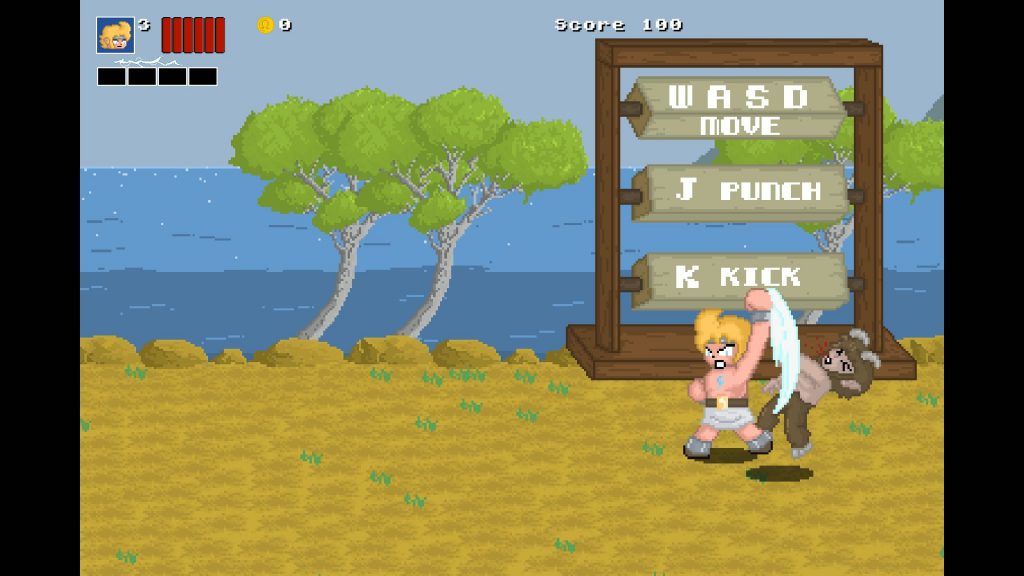 Just as basic as the story is, the gameplay isn’t much far apart from it. You can punch and activate with a well-timed second punch an automatic attack series ending with an uppercut that knocks most enemies down. The uppercut itself has a huge upward hitbox that is able to hit opponents, not on the same horizontal space.

Your second attack is a back-facing kick. The special attribute of it is a knockdown on hit that puts the enemy on the ground for a little bit like with the uppercut.
You can’t mix and match these attacks. They are completely separate.

To round things off, there’re special attacks. Hold on! You can’t use them at any time you want. A small Cyclops with a bag will sometimes walk around and drop Lightning power-ups. Up to four can be stacked, the more you have the stronger the move will be. You don’t have any control on which special attack you’ll use. 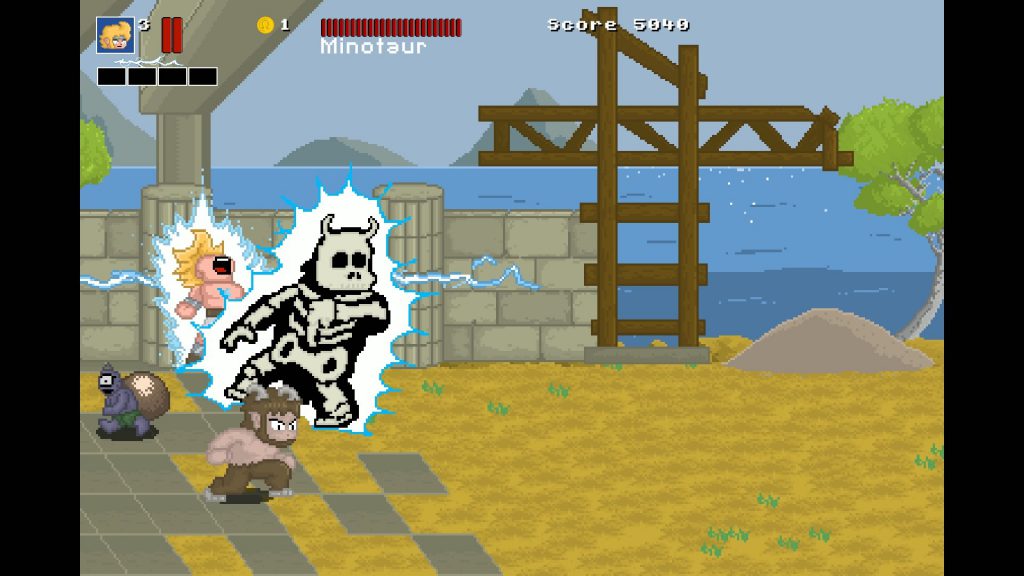 Enemies have only like 3 real archetypes outside of bosses. Mooks that want to get close to you, Domina Whips that attack outside of your immediate range and Sorcerers that attack from afar.

If there’s something to describe the whole Beat’em Up it’s the concept of Kiting. I.e. knowing how to maneuver your opponents into a position where you can easily finish them off.
Boss fights are a little bit more challenging but are pretty much the same with basic patterns. 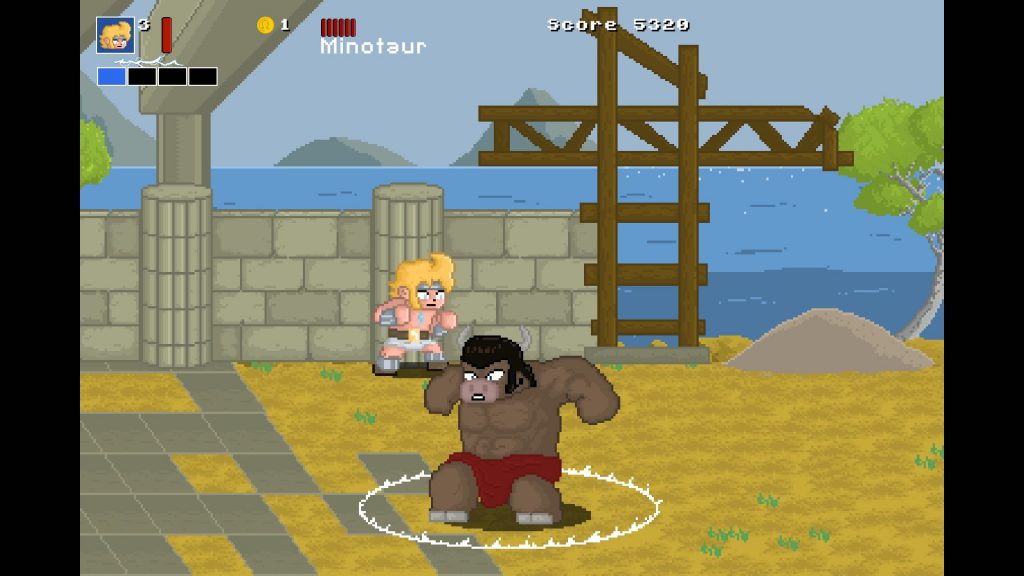 Next up on the platter is the Shoot’em Up segment. At some point, Zeus finds the right time to fly to the next spot and this is where you switch over to a classic 2D Top-Down-View Shoot’em Up. All you have are straightforward shots and nothing else. As to why he’s able to use his Lightning without collecting the Cyclops Power Ups? There’s an easy explanation for this… because he can.

Once again this is pretty standard fare and these segments are short with only a few different enemies. At a later point, there’ll be a twist but it’s not going to be a game-changer. 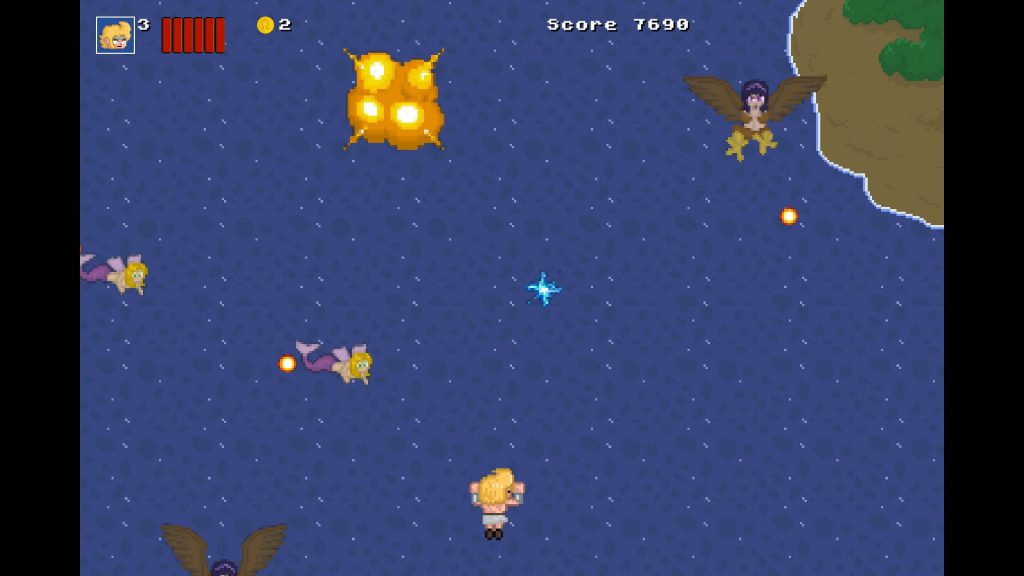 So here we are, this is it. This is the gameplay. I already said it’s going to be basic. Though I can’t say there aren’t any gripes, though there are more like small ones.
For example, the lightning special attacks stun the enemies far too short. Considering the strength and rarity of them they should at least have some stun capability. A full-screen attack at a full stock isn’t enough in my opinion.

All the other things are functional enough to not to fuss over it. Which is why I’ll leave that to the end after the Verdict.

The graphics of Zeus Begins look fine. You can see there has been put effort into the animations even if there aren’t that many of them but they can be quite detailed. Especially, when it comes to the K.O. animations of the grunts.

The music is absolutely my favorite part of the game. It got some really nice tunes that pumps you up for the action, while the Shoot’em Up segments have more of a stroll like music. The main theme makes a great impact and the other stages are very good too even if not as memorable.

Zeus Begins is a solid game with one big issue: The Price. I was able to finish it in under one hour on my first playthrough, granted I might be a little more apt in these type of games.
With many classics and competitors on the market, the asking price is just too much. And no, it’s not a bad game. I found it very enjoyable, but just not recommendable at the current price. Considering the still respectable effort and the solid gameplay a Save for Later sounds like a fitting verdict.

Disclaimer: I’m fully aware that game dev is no cakewalk and that Zeus Begins had most likely a very limited budget. These thoughts are just food for thought for future endeavors.

Here are some thoughts from the perspective of a Fighting Game player. For those who don’t know, the father of Street Fighter and Final Fight. Which is another classic Beat’em Up. For those who’re interested here are two translated interview parts by FGC Translated:

So with the connection of Fighting Games and Beat’em Ups established, let’s put out some ideas for Zeus Begins.

Attacks
Normal attacks don’t exactly exist here. You only have a choice between punch, wait, punch, wait, punch or punch, punch combo. Here’s the issue of the punch combo, it’s automated and once you’re in it, it can’t be stopped. Making you vulnerable to attacks. Which in turn reduces its usability. Giving control over specific attacks from within the combo might add some more variety into the gameplay. Like with special commands, for example, double-tap forward and punch for the uppercut.
The kicks have the same issue. I know it’s meant to be a back attack but isn’t it too much of a waste? How about something like Punch, Kick into knockdown to add some more options in how to approach a fight?

Control and Moveset play a major part when it comes to Beat’em Ups, which is also why Capcom is able to produce something like DMC3,4 and 5 with fighting game head Itsuno at the helm.

Special Attacks
The special attacks are far too limited and random to be fun. For example, one of the Streets of Rage games had a special bar that keeps loading and gives you a free special attack once it’s full. Special Attacks are meant to be fun to use, putting heavy restrictions on it can damper the fun factor.
Another issue is the lack of control. You can’t decide on how many bars you want to use. Sometimes you’d just want to use the lvl 1 projectile but it just isn’t possible because you have more than one gauge.

These are just some quick thoughts.

And as a little send off, here’s a good video that touches upon the basics of fighting games: