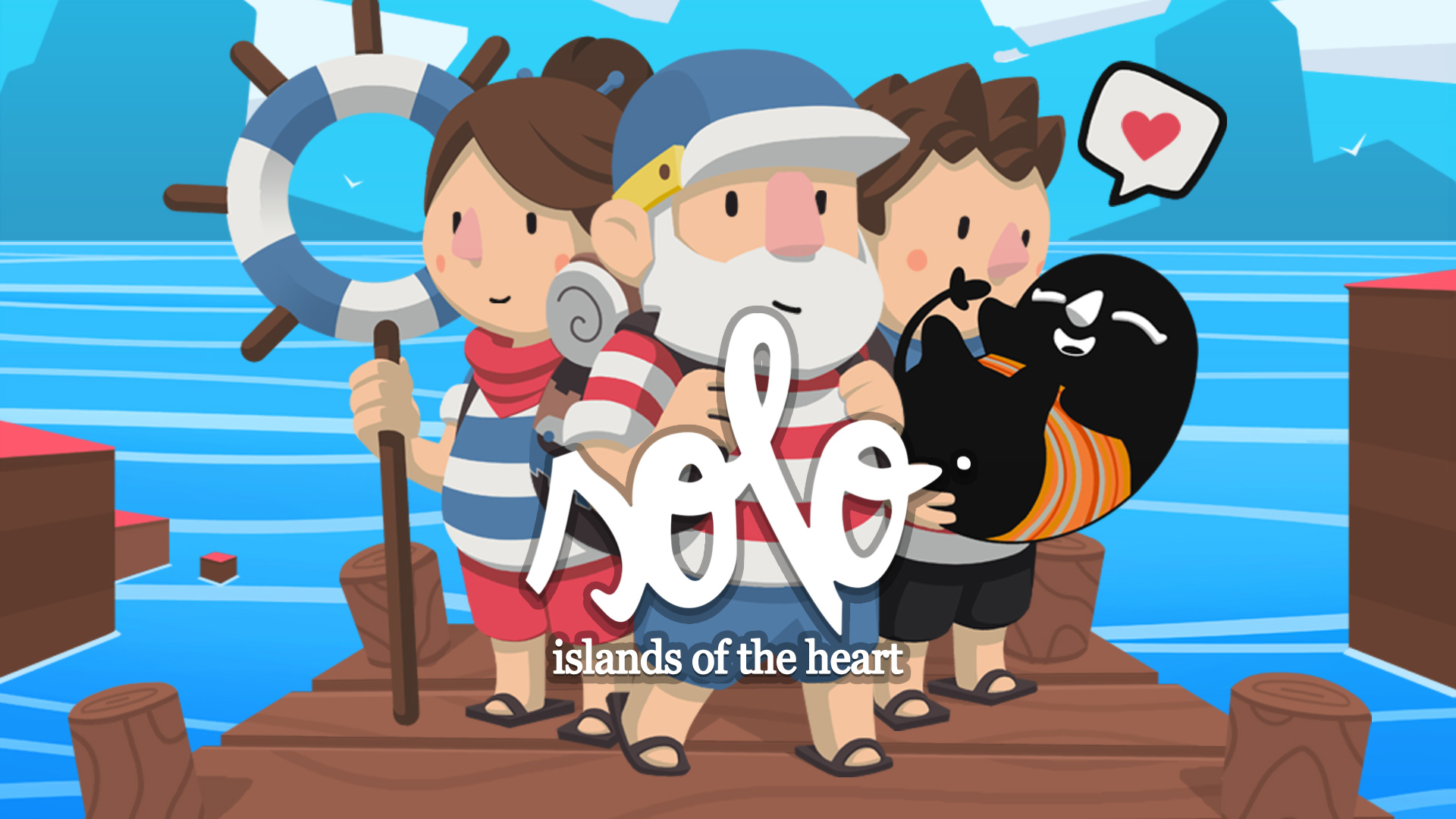 REVIEW: Solo: Islands of the Heart – Xbox One

Sailing somewhere between a game and a therapy session, Solo: Islands of the Heart asks a lot of you to enjoy a niche experience.

You know, with a name like Solo: Islands of the Heart, the title itself should have been my first clue to recognize how schmaltzy this game would be—and as someone with said word in my name, you would think this game would be perfect for me. Sadly, the overall experience felt like a game about the creators’ personal hardships at best and a game of romantic pretensions at worst, but that end result is likely due to the fact that the game’s purpose did not resonate with me. As a game, however, Solo: Islands of the Heart is a comforting journey, albeit a short and relatively simple one, that never really pushes you in terms of puzzle complexity. Instead, any source of challenge is focused on asking yourself to reflect on your life in order to better understand who you are, which is the result of the narrative’s themes rather than the product from the gameplay mechanics.

Seeing as how much of this game will be a matter of personal tastes, the best place to start talking about this game would be from the beginning. When you start, you will be asked what gender you want to be—female, male or non-binary—as well as what gender you would like to love; you will also be asked to share the name of your most beloved one. All these personal questions mainly serve to have you fool yourself into answering any future questions truthfully, but these starting questions have very little, if any, influence as the game makes liberal usage of the singular “they” pronoun.

After the introductory scrawl establishes the tone with phrases like, “I feel deaf, away from my own heartbeat. Is it love to find a matching tempo?,” you are placed on a lone island to get a feel of the controls. The only things you can do are to interact with a few chairs as well as to play around with a (Legend of Zelda) Wind Waker camera system, which also allows you to take selfies because trendy youthful narcissism. You then take the boat out towards a distant island, all of which is a scripted cut-scene in case you thought you might have some influence on the game. The island afterwards is the real tutorial as the game teaches you the fundamentals: You interact with lighthouses to connect to one another across the emerging islands; you answer personal questions with the totem pole along with a helpful spirit; and you raise up another island once hidden from you in the great blue sea. Subtle.

If all of this description sounds heavy-handed in symbolism, then you probably aren’t the intended audience. The type of questions you answer range from topics as inane as “Do you think you will ever be loved?” to more “mature” questions like “Do you think it’s possible to love more than one person?” or “Is love unlearned, or is it something we culturally inherit?” (Asking these types of questions is fine because this game is meant to be an introspective experience; I highlighted the maturity to help explain the ESRB rating as there are some mentions of physical love.) Some of the responses are a little more forced than others, but that issue is likely due to the three-option restriction. What is important about this aspect is that these sequences, as well as any random letters you find, make up a good portion of the two- to three-hour adventure.

To be fair, the game never comments on your responses, so you cannot argue that the game is beating any messages over your head. At the same time, these sequences also never challenge you to reexamine your stances nor provide any choices/consequences to change up a linear adventure, so the result feels quite limp. You might view this type of experience as therapeutic given the pleasant visuals, the calming soundtrack and the overall lax experience in terms of puzzles.

Now the rest of the gameplay, outside of these narrative sequences, mainly centers around using various boxes and items to navigate the islands to the next lighthouse or totem pole. Out of all the Legend of Zelda influences, this aspect is perhaps the most polished, but making that comparison would set far too high expectations. Every puzzle utilizes boxes in one form or another whether that is using a vent for your parachute or to place boxes with a magic wand. The latter of these two mechanics can be finicky on a controller as the targeting system will constantly snap and re-snap to the suggested spots. There is also a guitar you Some puzzles are a little more clever than they initially appear, although these situations are too few and too far between one another to prop up the core gameplay.

Besides these two gameplay systems, the rest of the experience is focused around collectables, trophy-hunting rewards and other little distractions to appreciate all the little details in the environments. In most games, this form of padding is usually worth calling out for what it really is, although here the intention feels more like an attempt to have the player appreciate the environments as much as the creators themselves, which is unfortunately not always the case.

Now before you think of me as a heartless, mechanics-driven cynic, there is one example in this game of how effective a mechanics-driven story can be: the ending. That sequence is so wonderfully simple and perfect in terms of gameplay and narrative choices that I cannot spoil it. However, the problem is the game really didn’t earn that kind of ending; more specifically, the narrative certainly experienced a complete journey whereas one half of the gameplay committed to it.

If you only view the series of questions and responses as the core gameplay loop, then you will probably appreciate the ending for what it is. Much like the lighthouses, the sea, the totem poles, the ghost of your beloved, and all the other dream-like objects, you might even attach some symbolism to excuse how unrelated it is to the adventure: Boxes are containers; you use them for storage and for support; ergo, the boxes represent the building blocks for your growth and enlightenment—but then you would be more pretentious than I.

The only reason I assume these gameplay elements exist is to make the game more engaging for young adults who I assume is the intended audience. You might look at the presentation and say, “No shit, Sherlock,” but these types of questions asked throughout are the egocentric concerns of most teenagers and young adults with a romanticized view of the world. Between making the game entirely a walking simulator with a series of questions and making the game as it is with simple puzzles throughout, the second choice disguises the game as a dating-advice test. Granted, much like the rest of the game, the fiction is transparent, and once you view the game this way it quickly wears away under scrutiny. So, if you view the game from that perspective, then a lot of these decisions make more sense even if the end result makes for a game that feels more like patronizing than questioning oneself.

The question that should be asked at this point is, “Why do people excuse games like Unravel, Journey, A Tale of Two Brothers or the dozens of other emotional-driven games with simple gameplay systems?” The answer is how the core gameplay works with the story rather than detract from it. In Unravel, while the “love is a thread that connects us all” message is gag-inducing, the message wasn’t repeated in written or spoken form; the message was conveyed through various visual storytelling as well as Yarny’s adventure to travel all across Sweden to return home. Journey also utilized mostly visual storytelling while also utilizing smart usage of gameplay set-pieces and soundtrack cues. A Tale of Two Brothers, however, focused exclusively on the gameplay systems of either having one player controlling two brothers with each analogue stick or having two people play as the two brothers. Any one of these formats would have made the simple gameplay of Solo: Islands of the Heart more tolerable, and it’s a shame the beloved ghost didn’t play that type of role for the adventure.

A Question is Never the End; It’s the Start of Another Question

In spite of what I have said, if you enjoy the game as it is or you think you can connect with it more meaningfully than I, then more power to you. Similar to the many questions throughout the experience, my purpose isn’t to present what I think would make a better game; my point is to present how and why the game did not engage me as well as to have you ask yourself if that journey is worth taking. Unlike the other games I have mentioned, none have tackled the same type of questions from Solo: Islands of the Heart, so if you view the game’s merits from that angle, then there is something special to experience—how much you value that experience is another question.