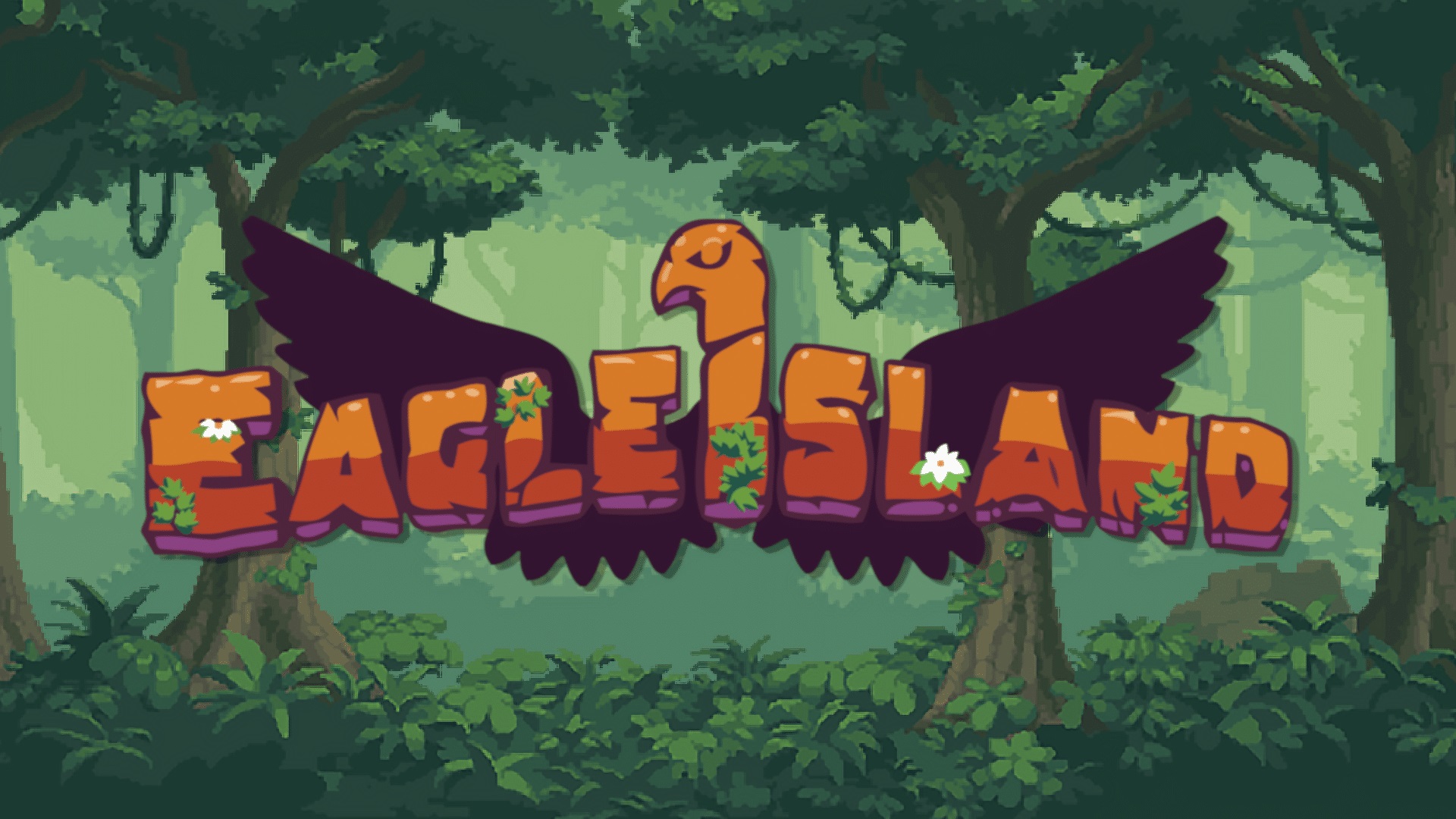 A nice mix of Metroivania and Rogue-lite. Plus, cute owls to throw at enemies!

Eagle Island invites you on a dangerously cute island, for a mix between rogue-lite and Metroidvania. This sentence just ticked all the right boxes for me, as I play a lot of action platformers, Metroidvanias and rogue-lites. Let’s see whether Eagle Island is a convincing blend of these popular genres!

Pretty action platformers are plentiful, there are so many that it’s hard for any of them to seduce players without a unique twist. Eagle Island’s unique spin on the formula is its combat system, putting us in the shoes of a falconer that does not attack directly but rather launches an owl named Koji at unsuspecting enemies. Holding the attack button can pause our falconer mid-air, letting us aim carefully in 8 directions. This doesn’t work with the mouse, so I strongly suggest that you use a gamepad, and it is even better if you are proficient with the D-Pad. (Edit: I was wrong, it is possible to aim at 360° if you dig under “Game tweaks” in the options menu, and the mouse can be activated under “Accessibility”). The bird doesn’t have a huge range, and it doesn’t come back instantly if you missed, so you need to be careful and deliberate. On the other hand, if you hit a target, then you can immediately reuse the owl and chain attack. While it’s not very complicated, it requires skill to combo effectively. Why would you want to combo? Because it’s a way to regenerate health. However, it is so hard to pull off that you won’t be able to do it all that often. 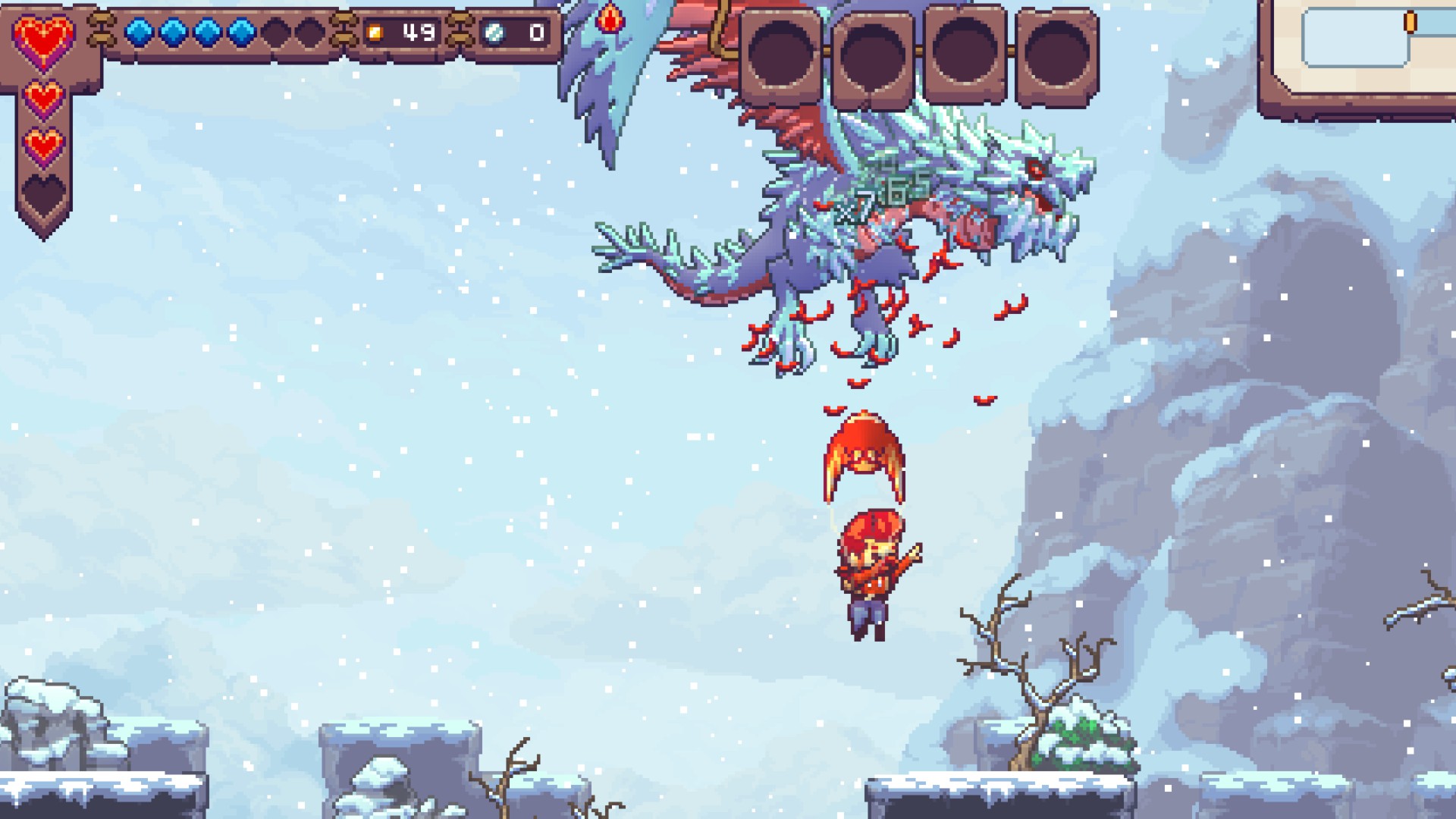 A challenge for everyone

As you get a feel of the first level of the game, if you don’t feel too confident that you can perform combos frequently, then I suggest that you restart the game and switch to easy mode, as this then allows you to collect more health during the levels (whether inside chests or by purchasing them at an itinerant toucan bird). As a platformer veteran, I have no shame to admit that I felt like easy was the right difficulty for me. Well, it’s also because there are rogue-lite elements to Eagle Island, and I wanted to make progress faster so that I could deliver this review. 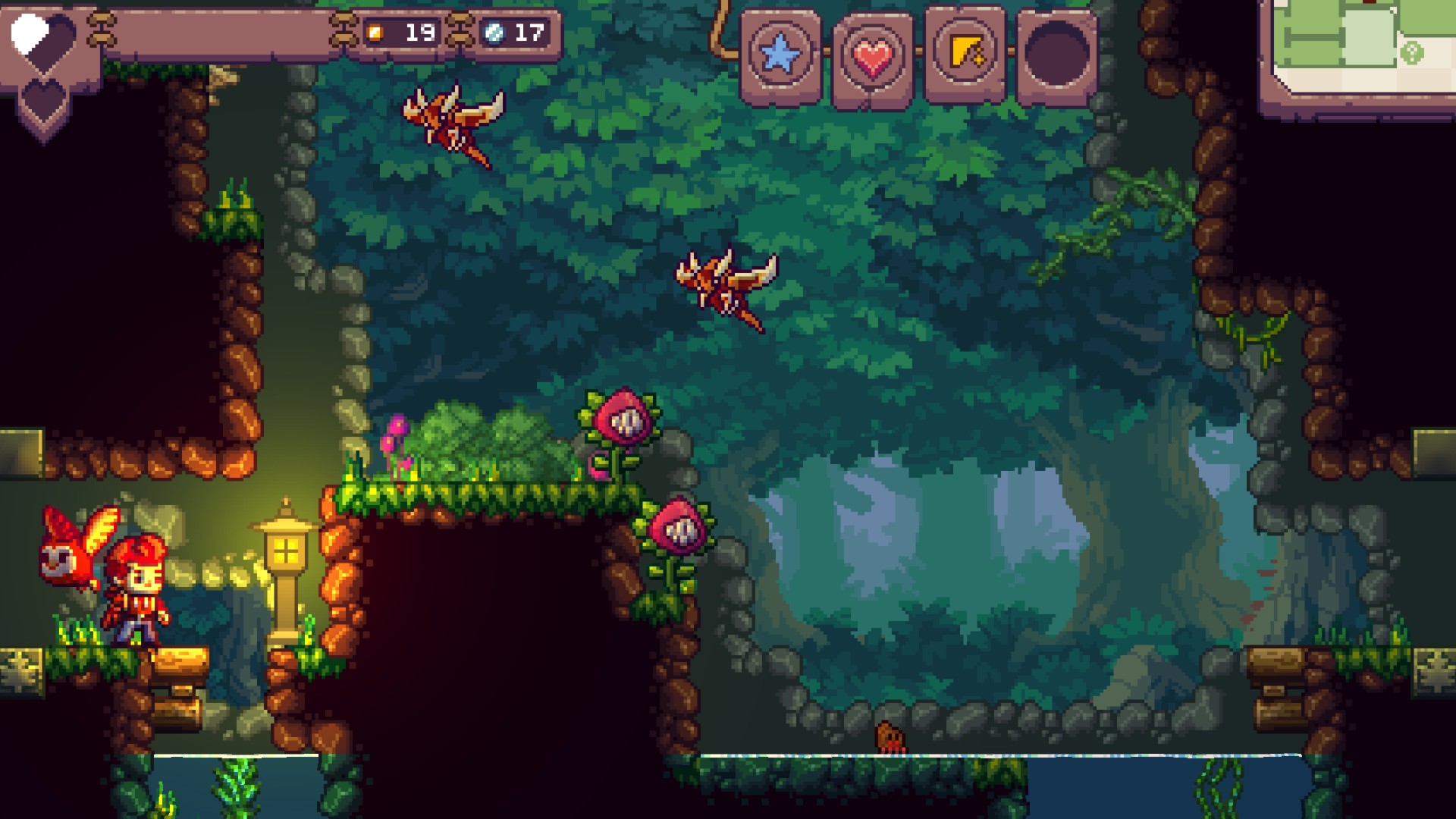 While a full-on rogue-lite mode with permadeath can be unlocked after the story mode (or right at the start if you insist), the main story mode lets you respawn at the beginning of a dungeon that you failed. At the start, if you didn’t specify anything then the dungeons are randomly generated each time, but if you picked “Official Seed” then you always replay the same “fixed” levels. Now, I will both commend and harshly criticize this aspect of Eagle Island. First, I will say that I am happy to see rogue-lite games being accessible like that, letting you reap the benefits of procedural generation without being sent back to the beginning each time that you fail. Mothergunship was also a bit like that, dying during a mission would only set you back a little and then you could have a go at a fresh new level. This is definitively the next logical step for mainstreaming the rogue-lite experience and integrating it into less frustrating games. Then, I will criticize Eagle Island for this because the procedural generation is basically pointless. I mean, from one run to the next, each dungeon has similar challenges, enemies, and power-ups. If it’s simple remixing the order of the rooms, then what’s the point of procedural generation? The Binding of Isaac was so fun because each run could be wildly different in terms of enemies encountered and power-ups gained, completely changing your experience with the game. If the only difference between each run is the layout of the rooms, then it’s not very exciting to replay. 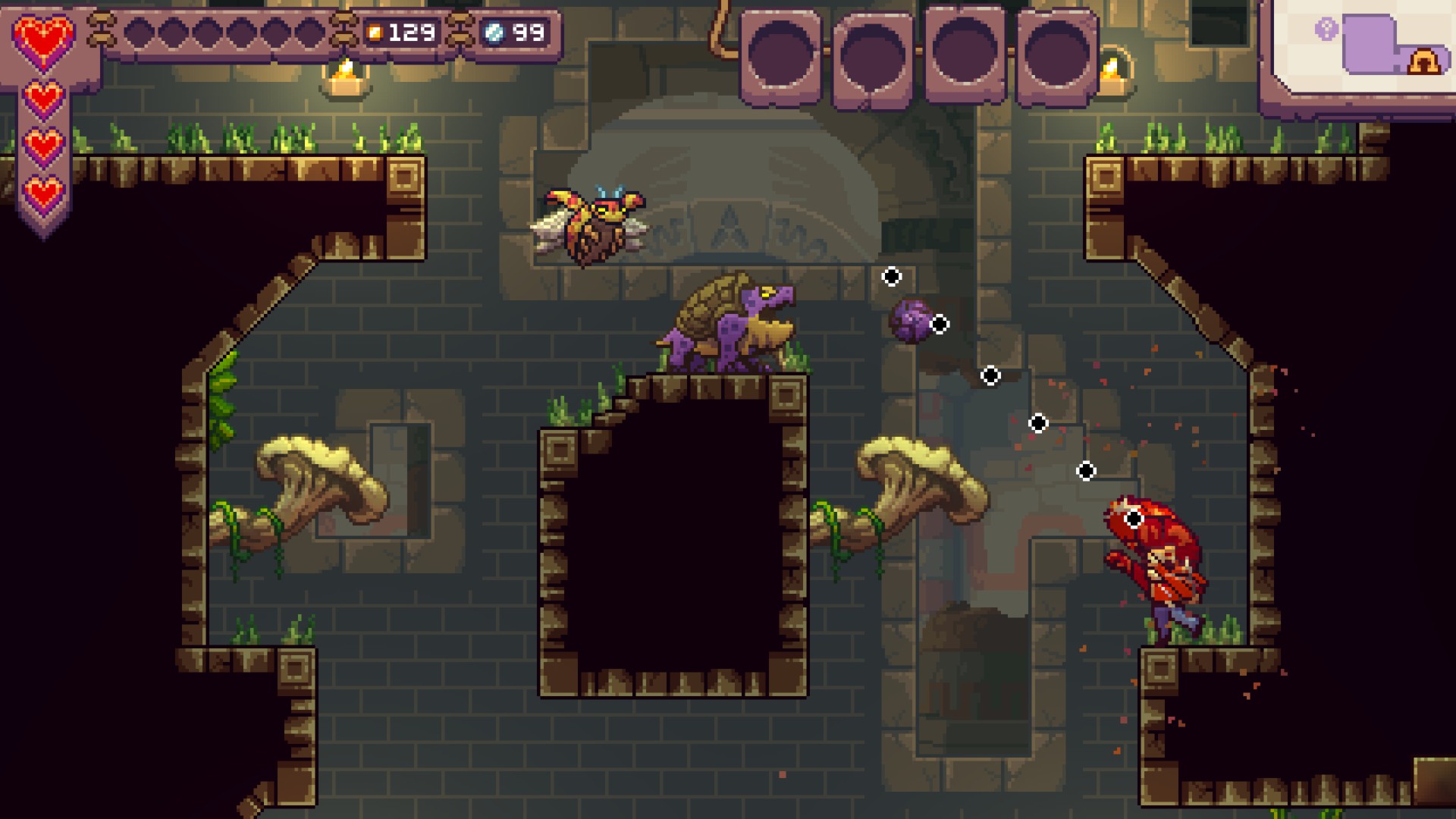 Even worse, Eagle Island completely mishandles its power-ups. There are two main categories of power-ups: obligatory powers earned by playing through the story, and temporary boosts. Before diving into their shortcomings, I must say that Eagle Island actually did something very right: every power-up adds something useful rather than being a simple stats boost as in far too many rogue-lite games. With that being said, temporary boosts are not exactly ideal, because right as your brain gets used to this new way to tackle situations then the power disappears as you leave the level. At least, it’s always very minor, and you can succeed without ever picking any of these up. I’m not saying that you should avoid them, what I am saying is that I would have preferred if they remained permanent. Then we have the story upgrades, which are usually feathers imbued with a specific power (electricity, ice, and fire) that can grant your owl Koji specific attacks. Electricity connects with enemies behind your target, ice freezes and fire explodes. While this is brilliant on paper, in practice it’s very inconvenient as these powers use mana, you don’t have a lot of mana, and it’s a hassle to have to scroll through the wheel of powers to pick the right one in the right situation. It’s all so circumstantial that most of the time I found myself sticking to the basic attack so that I would not have to bother with this system. A collateral victim of these limited power-ups is variety: there is only one attack pattern in this game, and if all of its slight variations are only temporary and circumstantial, then it really becomes way too repetitive after a while. It’s not a short game, you can count 6-10 hours until you see the end of the story. 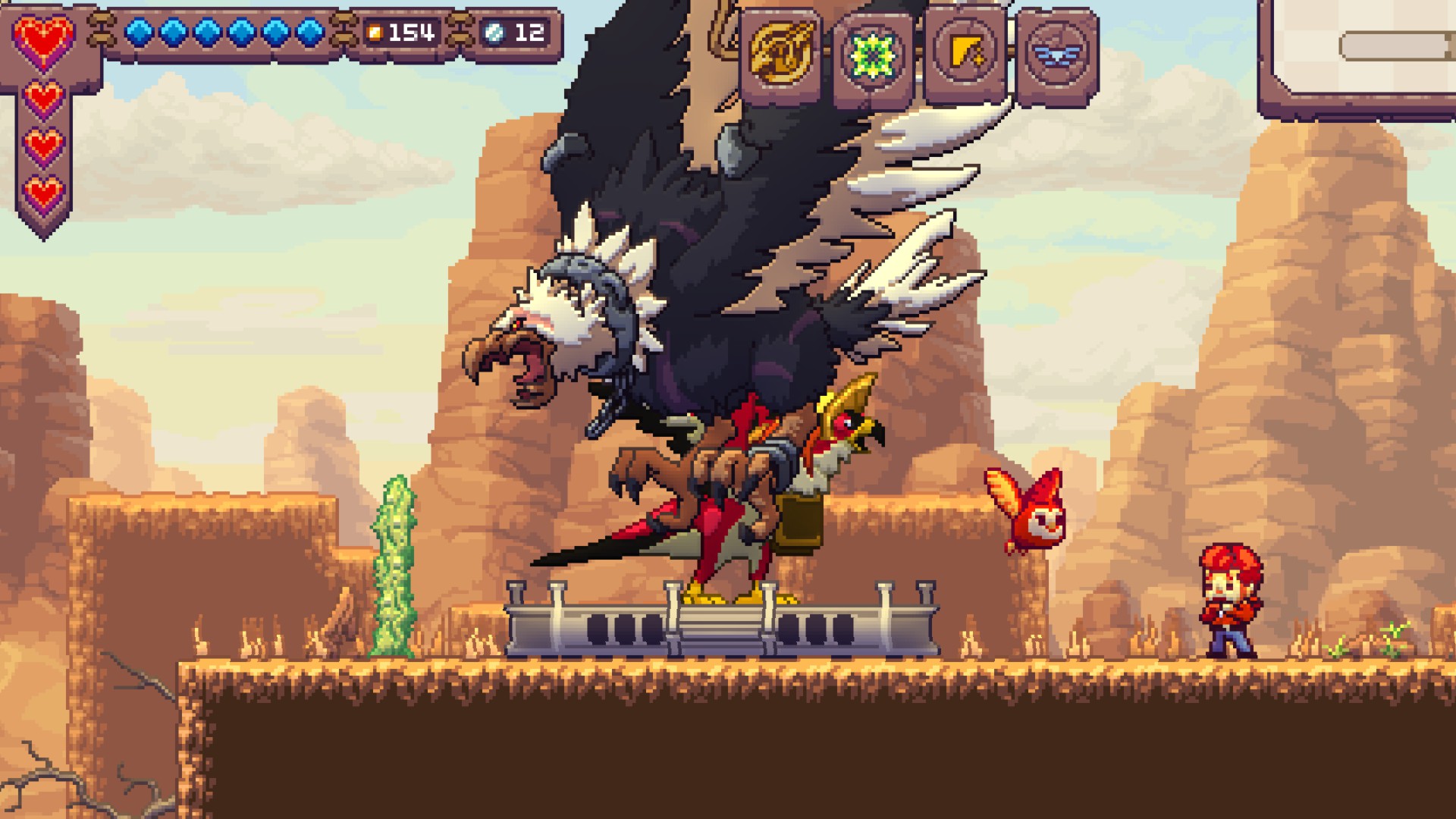 The story is about an eagle kidnapping our hero falconer’s second owl and terrorizing the population of an island, and we go on an adventure consisting of beating up the wildlife to protect it. The main area is some sort of small HUB, new powers and traversal abilities are required to access new areas in typical Metroidvania fashion. Once a new area has been uncovered, it shortly leads to one or more new dungeons, just enter the door to be transported to a randomly generated level, beat its boss and receive a new power. Boss fights are not a punishing affair, they are usually quite easy, which is a relief in games without save points. As I mentioned before, the light rogue-lite aspect is not necessary, but the light Metroidvania aspect is well integrated and a satisfying way to progress throughout the game. 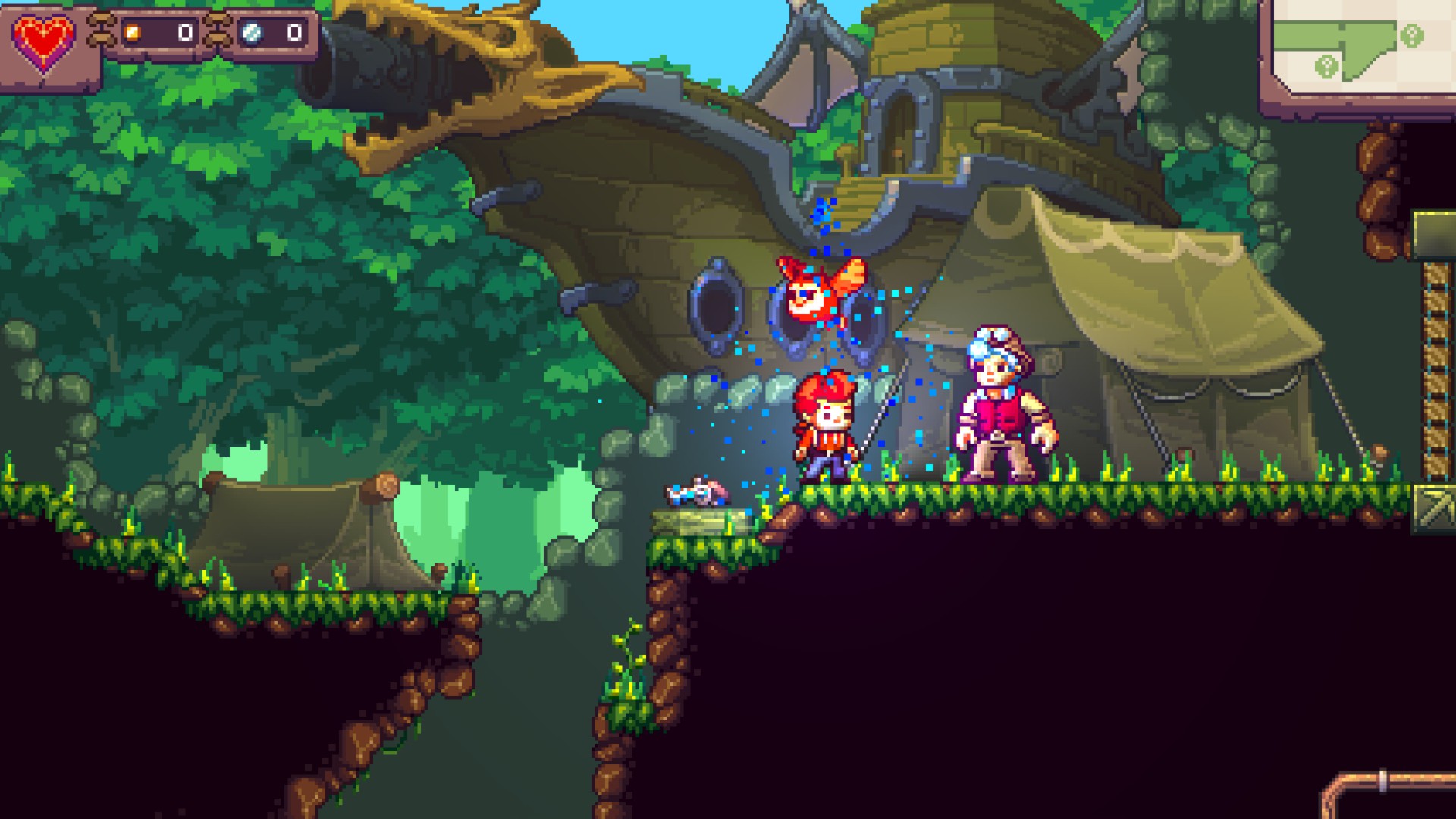 What I simply loved in Eagle Island are the graphics: the falconer bouncing around is a delight to see and control, and the owl Koji is cute as it swiftly moves into position. Their interaction is well worth a go at the game, and then you might be seduced by the varied landscapes, all bursting with colors and with life. A hostile life. I quite appreciated the variety in enemy types! 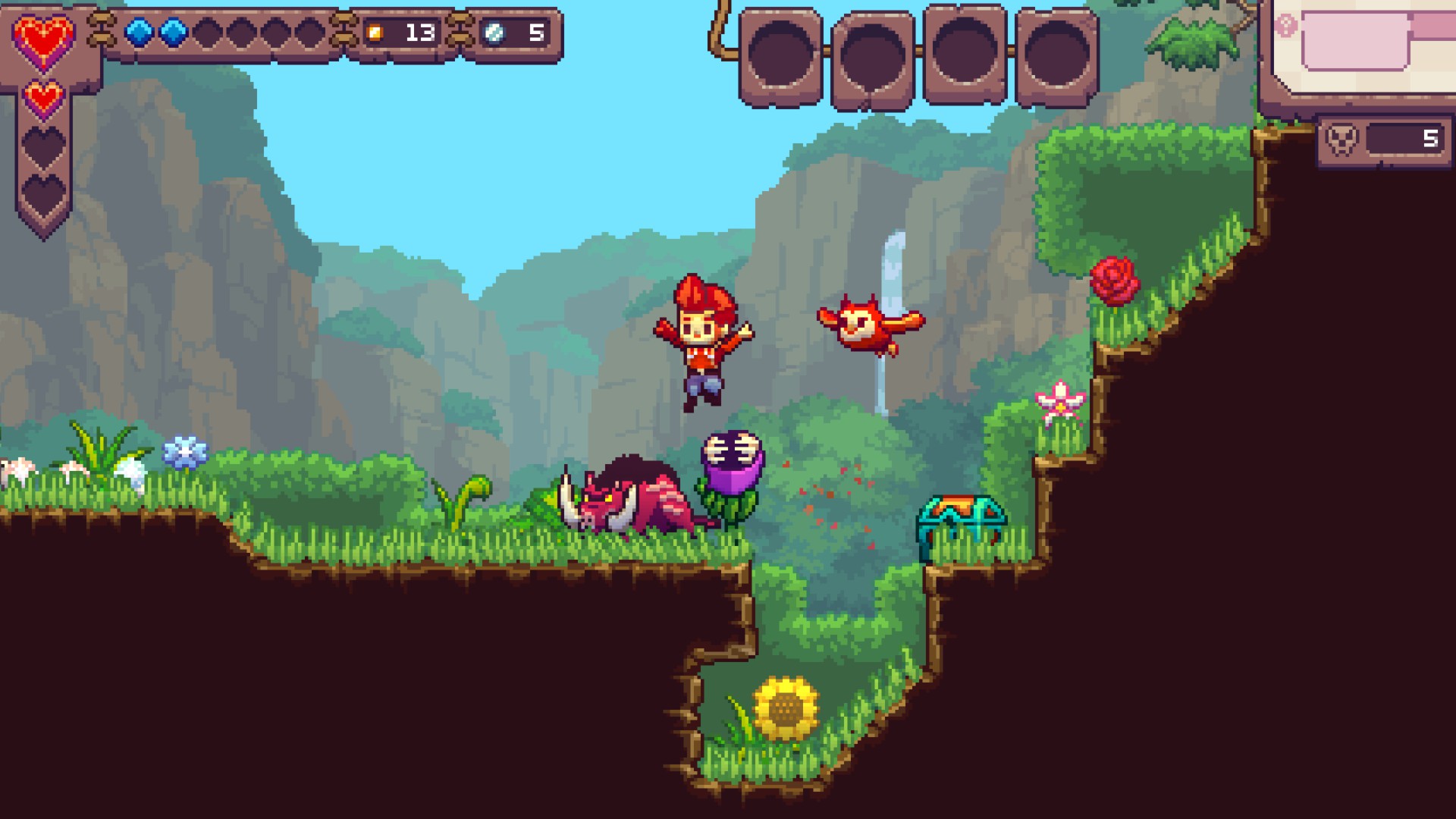 Eagle Island has challenges for all needs, whether you enjoy brutal permadeath with skilled gameplay or permissive and more classical progress through the story. It’s pretty and controls well once you get used to the controls or tweak them to your liking, but as unique as it is, Eagle Island’s attack system is repetitive and didn’t manage to keep me hooked into the game until its very end. Still, I was charmed for a couple of hours, and despite its shortcomings, I admire the interesting blend of ideas in Eagle Island and the solid execution.