Hitman Meets Hotline Miami in a noir underworld of crime, drugs and the undead where the only soul left is a contracted Reaper sent by the Flame to crash another party in style.

If any single track could describe the rhythm gameplay through sound, “Blood on the Dancefloor” is the beat of DEADBOLT, a stealth-action hitman game in the style of Hotline Miami. An experience that prefers to dwell in the shadows, contemplating the next ambush, slowly rising out of the stillness of a gasp before the matter becomes a chaotic scramble with only the dead-beating pulse of the Reaper left alone in silence. Then hitting the elevator button with a smoke-break to take off the nerves before continuing the job.

This is the soul of DEADBOLT that makes the distress of failure and improvising solutions in advance a fleeting concern from another contract that you don’t know why you accepted it other than the habit at showing up to parties when everyone is dead.

Although the two experiences are very similar, DEADBOLT and Hotline Miami cater to different tastes. Whereas the Hotline Miami series imitate snuff films, the psychedelic disillusion of reality, and the type of entertainment that glorifies violence as much as examines its lasting effects, DEADBOLT offers a film noir underworld ruled by a crime syndicate within its purgatory of the undead with an even greater lack of purpose behind the Reaper’s motives. It is from the presentations as well as in the core gameplay that show DEADBOLT is perhaps the more Hitman approach, rewarding usage of opportunities and inventiveness rather than twitchiness of Hotline Miami.

As a game and as a story, DEADBOLT chooses its style and simplicity over being convoluted, choosing to revel in the methodology of a hit-and-run. This is indicative through the small gameplay refinements from the delays between raising their weapons between the alert phases; from the player’s own delay in aiming their weapon; from the versatility of tools, environmental distractions and alternative routes within each level; and the missions never being as simple as they initially appear when the situation is compromised. It is also apparent through the narrative that focuses on Death as a contract-killer sent to disenfranchise the infrastructure of zombie gangs upon vampire mafias upon skeleton mercenaries seeking to dominate the land of the living. Neither the gameplay nor the story become any more complicated than the deceptively puzzle-like contracts.

Instead of adding more elements to the gameplay or adding more depth to motives and backstory, the storyline prefers to use poetic fragments of details from your victims in an already undead world. The city is referred to as the Place, the main character as The Reaper and the Reaper’s contractor as the Fire, Details of the plot remain vague with little to no dialogue to the point where the game feels like the style was done for the sake of its art rather than for a purpose. As a result, the game’s greatest value is its consistent pace of challenge and variety, something missing from the Hotline Miami games that shifted its focus from allowing various playstyles into reflex challenges and where DEADBOLT rewards the more perceptive players who know their enemies and tools greater than themselves. 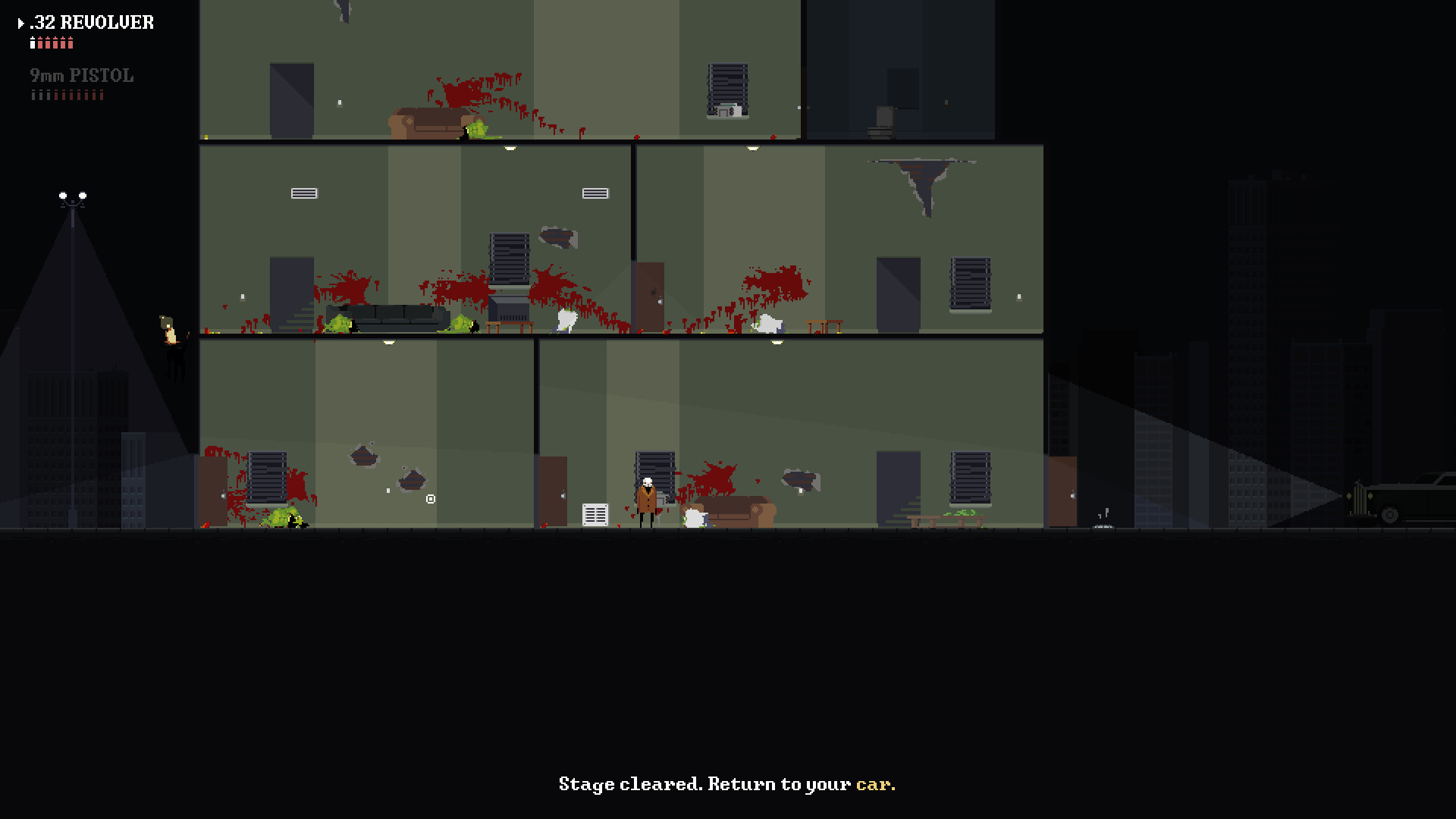 Clubbing At the Monster Mash

Although what I truly love about DEADBOLT that sets it apart from other stealth-action hybrid games isthat the enemies can be more creative as a result of having supernatural enemies. One type of zombies can use their severed heads as a spotter while their body is detached; some vampires can have phylacteries that prevent them from truly dying the first time; one type of skeleton is able to cast magic that can make them vanish as well as revive fallen allies. Even the variants for these categories differentiate their weaponry and toughness, which offers a surprising amount of variety to a game that couldn’t be possible in more grounded worlds.

The structure of the game, as previously mentioned, is a three-act progression of hits on three levels of corruption within the Place: The Zombies, The Vampires and the Skeletons. Only the first Act is limited in using one category of enemies, which never feels tiring because the threats are diverse. The other two acts begin with introducing new enemies before combining them with the previous variety to not only benefit the overall challenge of the game but also the narrative of disrupting the power-play from the bottom-up. Rewards come in the form of ratings on the success of the job, which earns you more souls only earned by completing achievements to unlock more tools for the Reaper, and the additional content provided by the level-editor as well as the hard mode that reworks the original twenty-seven levels truly explores the limits of its appeal.

Perhaps the one example of a level that never seizes its idea for future levels on being inventive is The Tinkerer. Instead of another target amongst a crowd of other hostiles, The Tinkerer is a challenge of navigating the death-traps to eliminate the security personnel of a crazed technician trapped within his home knowing the Reaper is coming for him. The ending is simple irony of triggering the technician’s own defenses against him without the satisfaction of taking the Reaper. It’s this kind of playfulness with the level-design and environment that shines the player-freedom of its greater levels that the game never seems to capitalize on as much as the Hitman games. 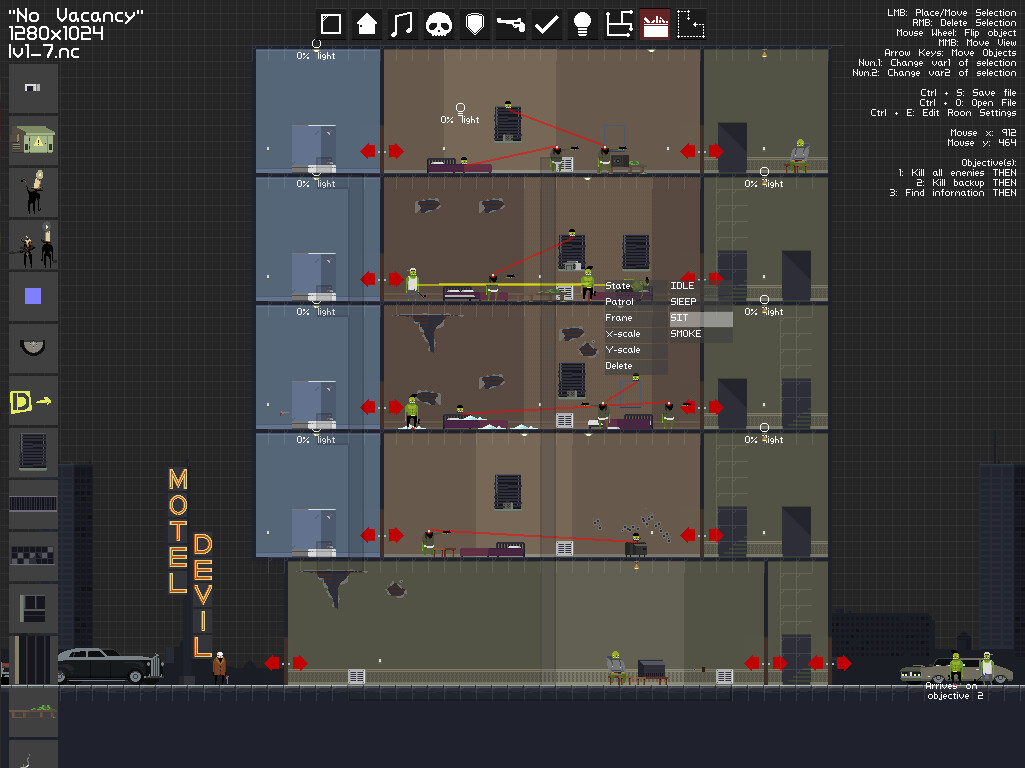 One Button to Doom Them All

If Volume was only guilty of creating a simplified Metal Gear game that would benefit from adding more player-agency to its mechanics, then DEADBOLT is guilty of not creating more of these Hitman level designs of poetic irony and playfulness within environments to enhance the core gameplay. The spirit captures the essence of Hitman but not the replayability and mastery from playing with its mechanics. It’s perhaps easier to design for this goal in mind with a 3D environment rather than a 2D design; however, there are many mechanics like the ventilation systems, sound positioning, and distractions that are more tied to individual levels for one opportunity than across all of them.

One notable oversight in the game’s controls is the interact button. It is responsible for picking-up weapons, interacting with distractions, turning off/on lights, opening and closing doors, crouching, entering and leaving vents—it simply is doing too much for one button. This wouldn’t be as bad as it’s implemented where the mouse does not affect the context of that action, rather it’s the proximity with the player. This one button could literally be the death of you simply because your character picked-up a hammer when you meant to hide behind a couch. It’s strange that the game doesn’t map the cover-button to R as reloading weapons is not a mechanic whereas the game does set knocking to a separate button exclusively for knocking on doors. It makes no sense why the control-scheme was designed the way it is.

More importantly, however, the limitation of one interactable button prevents the game from capitalizing on using it more often for traps, distractions and escapes more often in levels because the levels designed here mostly account for this problem. Had the developers tweaked the control-scheme, the open-nature of its game would have most likely pushed the game to the next level in earning its caliber as an unofficial Hitman experience. 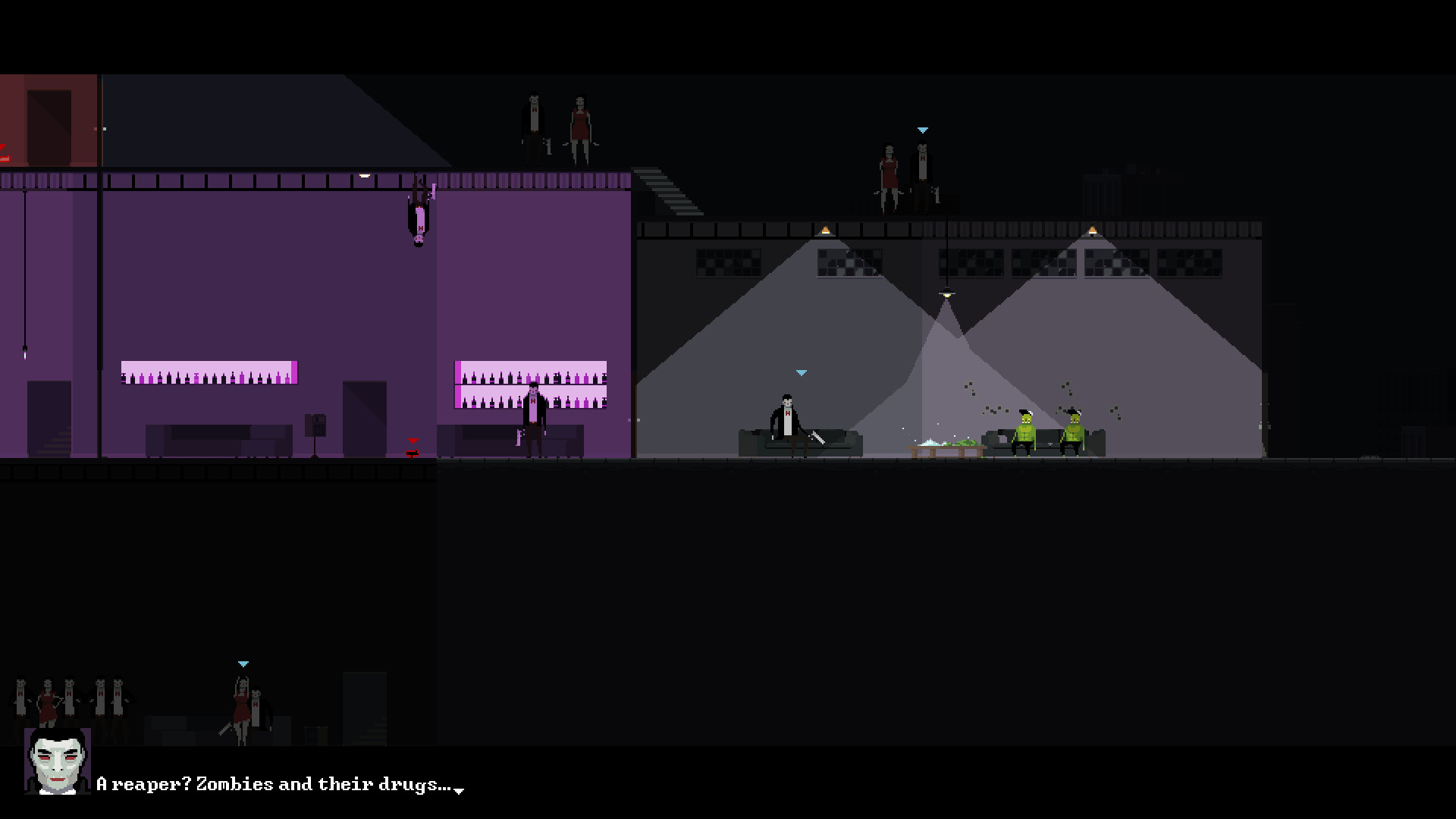 Verdict: Reap What You Have Sown

While shy of a new standard for stealth-action games, DEADBOLT manages to communicate the hunter and the hunted tension behind its exuberant style and refined simplicity of its gameplay. In the Place where only one soul can feel the fleeting fires of the Flame, the quiet mutterings of reflection simmer into nothing.

“Thus the living, lone and sobbing, In the throes of anguish throbbing, With the loathsome Furies robbing, Night and noon of peace and rest. But beyond the groans and grating Of abhorrent Life, is waiting, Sweet Oblivion, culminating All the years of fruitless quest.”—H.P. Lovecraft, “Despair.”