A very fun game whose biggest flaw is the price

Warhammer Chaosbane ends up being one of the funnest experiences I’ve had this year so far, but it can get pretty repetitive by the end, despite the fact its skill system brings a welcome freshness to the genre as a whole. The price is too steep for a recommendation and this is ignoring the Season Pass, which makes this game not even remotely worth its current Magnus Edition price of 69,99€.

This is a pretty basic affair. It starts with a victory for humans, lead by Magnus, over the Chaos. Rejoicing the win, Magnus is elected Emperor but is quickly captured by a spell when chaospawn manage to infiltrate the castle during the night, not long after the war victory. The sewers are filled with Chaos and it’s your job to quickly “clean” them and try to find the origin of the spell and the Chaos’ unusual tactical maneuvers (which hint at something far more dangerous lurking in the dark) to get Magnus back from his ill state before the rest of the human population notices and chaos (literally this time) sets in the lands.

It’s a decent premise that serves as the purpose for the game’s fetch-quest oriented mission design, which I’ll get to in more detail in the Gameplay section. The story is serviceable and is by no means a proper reason to get this game. Much like all ARPG’s, the gameplay is what you should be focused on. 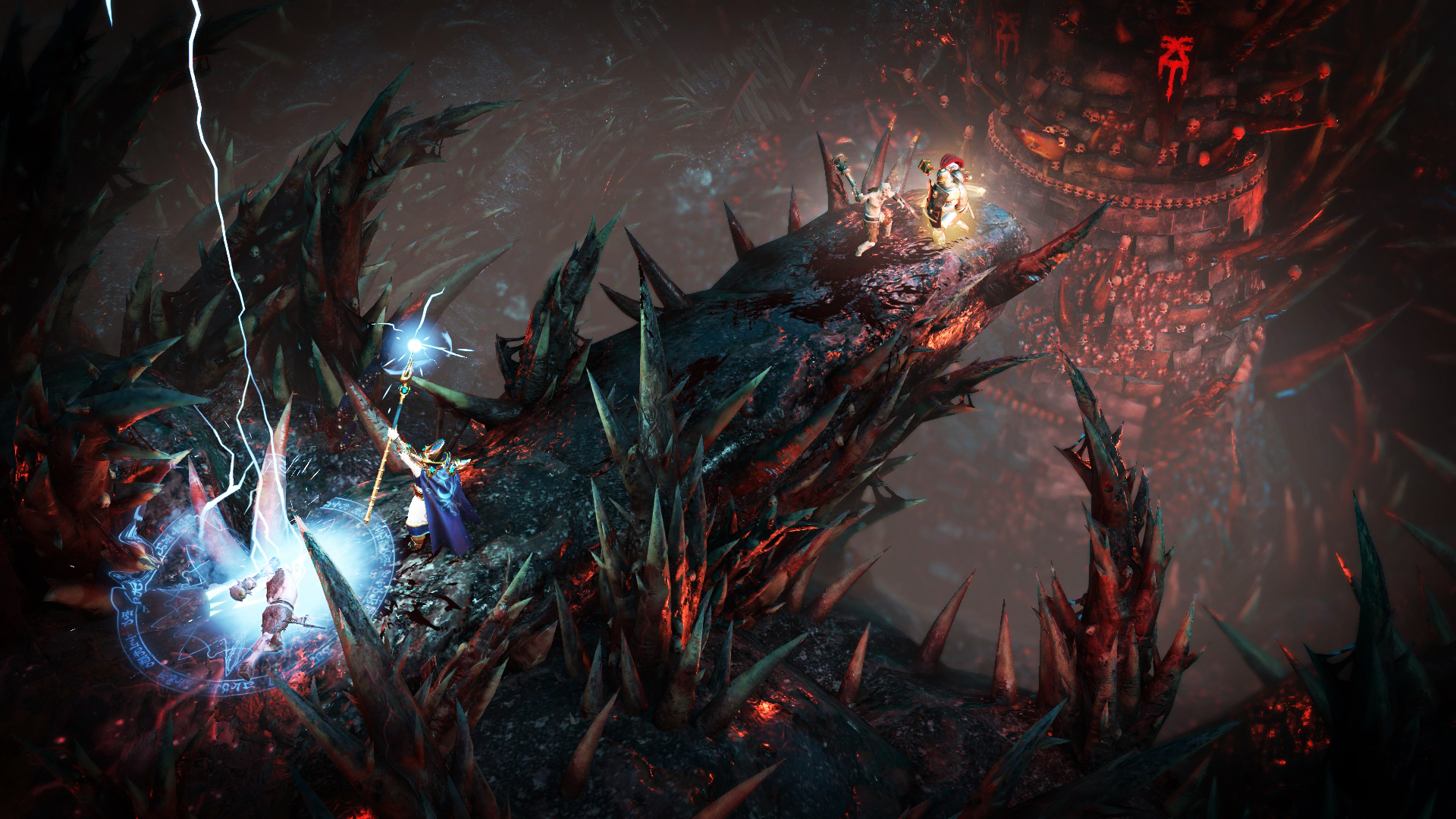 Overall, it’s fresh and very fun but has a few unfortunate problems due to the pacing and quest design. It plays like a pretty typical ARPG such as Torchlight and Diablo, taking their control scheme (with movement being mouse oriented) instead of the more common hack and slash style ARPG’s like Victor Vran or Bombshell (which used WASD). You can customize your character through a skill wheel: a wheel of slots that include passives, actives and a few buffs (such as extra gold/XP and more interesting buffs). This wheel is capped, so you can only put in four active skills for example. The same cap is for the remaining slots for each type of ability you want to customize.

The great thing about the skill system is that it’s not limited as you may think from the wheel system. The skills are unlocked automatically as you level up and you can’t hand pick which ones to unlock as you play and level up. Now, while sounding weird or dumbed down this actually comes off the other way around. In my opinion, as you level up you gain skill points which works as a pseudo-currency for the skills you can carry. This means once you reach the max level of 50 you can put any combination of skills you want, provided you do not exceed that skill point cap you have. All skills and buffs cost a certain amount of skill points (upgraded versions of said skills obviously cost more). I personally recommend always equipping the level 3 basic attack as it’s the one you’ll be using the most.

Taking the cue about the basic attacks, I should explain their usefulness: some attacks (basic attacks being the most obvious example) will allow you to gradually build energy for each successful hit. Energy is the equivalent of mana in other typical ARPG’s: all remaining abilities (with very few exceptions) will cost energy to be used. This helps the gameplay immensely as it promotes a very nice berserk style of play: attack in order to be able to deliver stronger attacks. It actively encourages a very aggressive playstyle, helping the game feel faster paced than many of its peers from the genre.

The quest design is severely lacking and is partially hurt by the world design. The way the game works is through hubs which have levels attached to them. Quests send you to those levels repeatedly to kill the enemies and do some objective: save five guys, turn two valves, buy some milk…

…okay maybe not the last one.

But it’s boring after a while! The first act is literally four hours of going through the same looking sewers with very similar designs and killing the same enemies except for a few minibosses to add some variation to everything.

And this goes on and on…

Now, the gameplay is really solid and the way it allows for builds is really, really cool and unique but there’s a limit to how many levels you can repeat in order keep me playing. Sometimes I pretty much felt I was playing the exact same level/mission two hours prior to where I was at the time, and that’s just not what I should be feeling in any game, ever. This isn’t helped by the fact the game has its world designed like this throughout the whole campaign and, sadly, it is not an open world ARPG as I think it should be. It instead plays like Gauntlet, where you take a mission and go to a dungeon and complete the mission. Rinse and repeat. 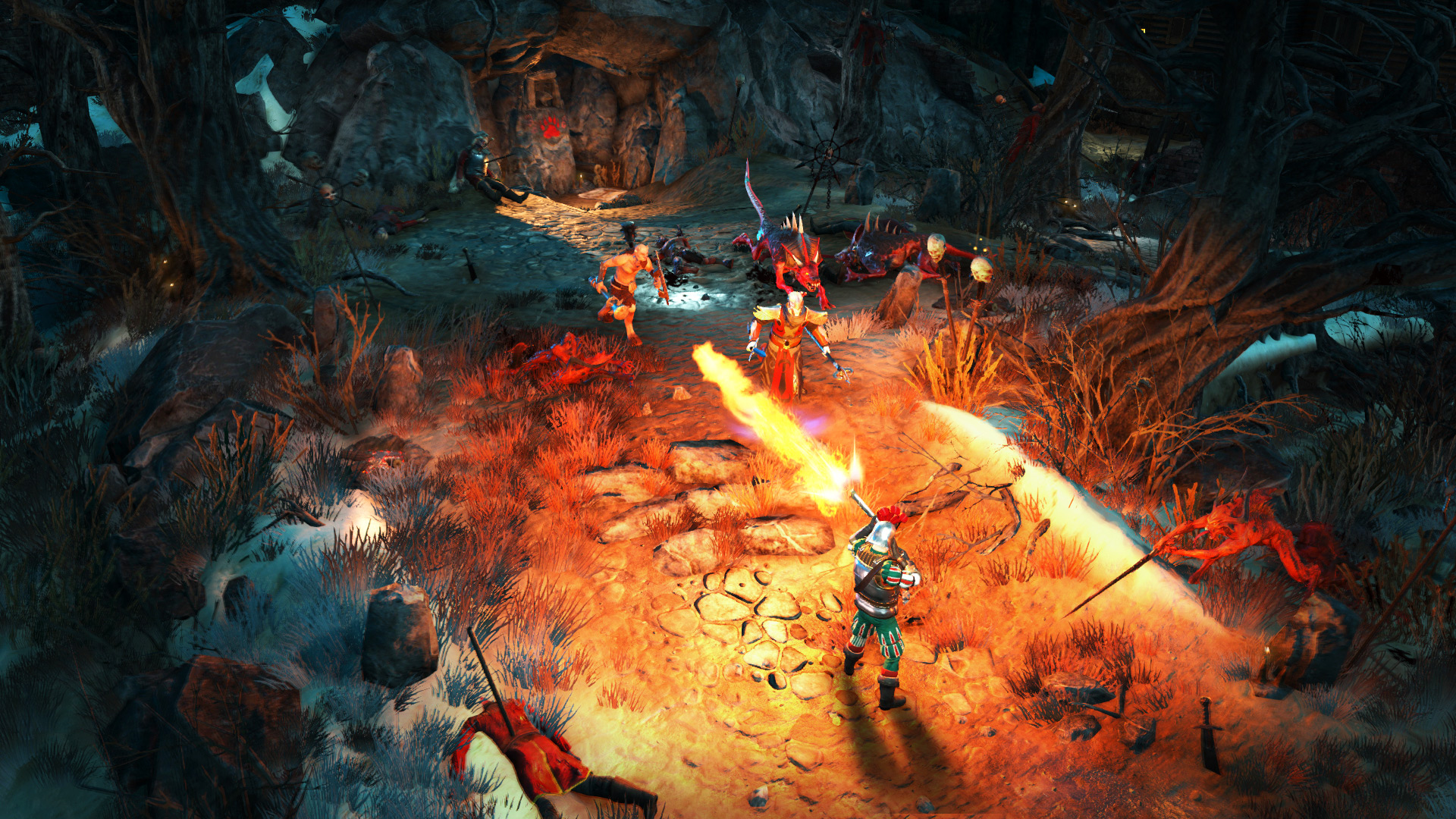 The endgame is, however, quite interesting. Players must use collected gold (so it actually has some purpose) throughout the game where you buy “contracts” to play relic hunts. Then just farm from the game’s highest-rated gear to get all the buffs (and even more so if you get the full set, which is the highest reward of the endgame farming, think of it like The Division‘s endgame farm).

To me, the gameplay is extremely fun and responsive, from the controls to the sound effects. The environment and world design are lacking and that may end up hurting the replay value of the game for many people as it depends on the quality of its many dungeons (since it doesn’t have an open world) which isn’t that great either. The fact that the game is priced at 50 euros and lasts 15 hours (not counting the endgame farming) is a real bummer for fans of the ARPG genre and the Warhammer franchise as there’s little value when taking the price tag into account. 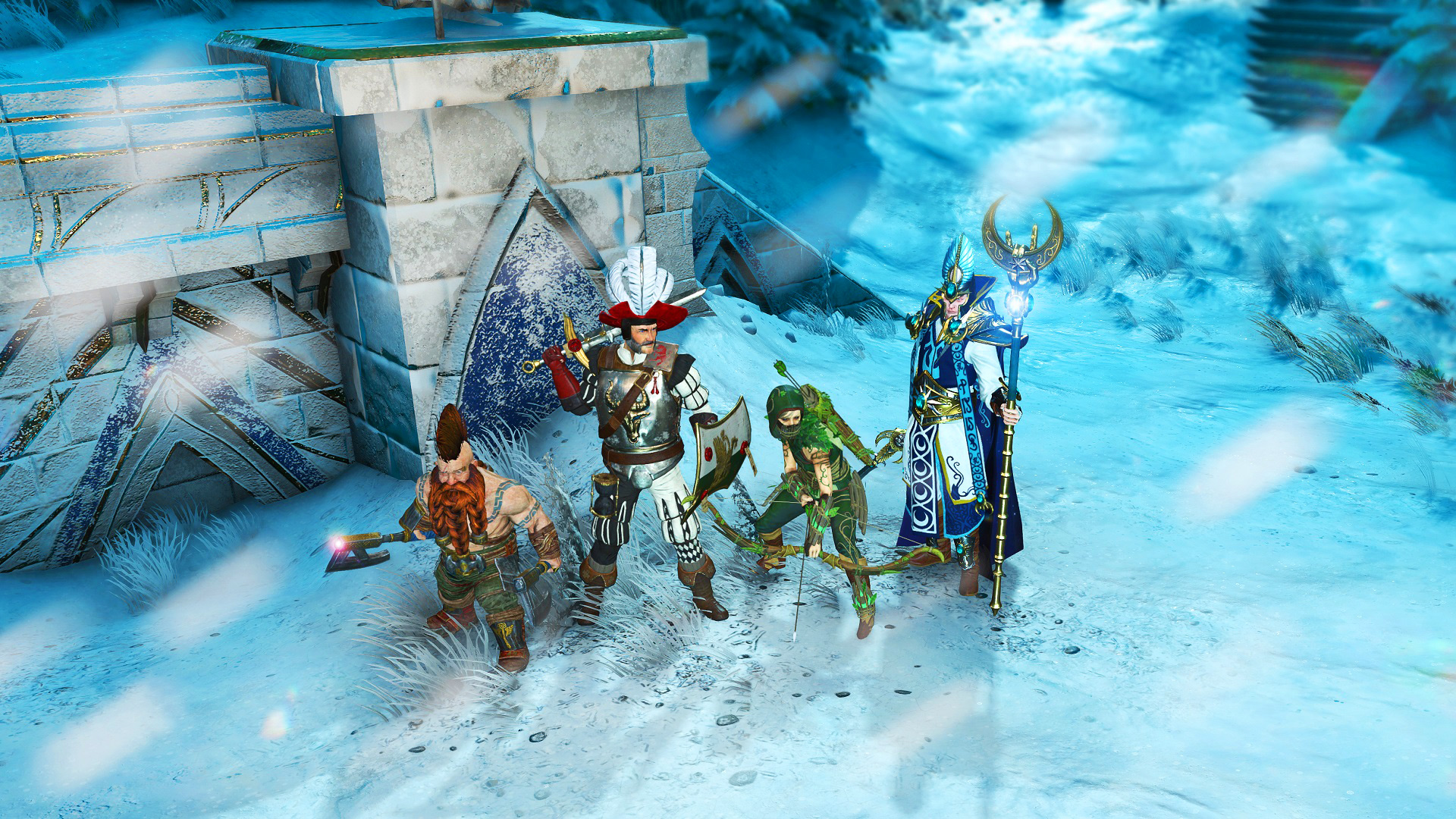 The sound design here, in general, is pretty solid. Sound effects during combat are great and so is the voice acting for the most part… Elessa’s voice-acting sucks, though, which is unfortunate as she was my “main” pick. The soundtrack is pretty great and fits the game, whether you’re adventuring or in combat or simply listening to the story bits.

Graphicswise, however, there is a big issue for the PC crowd. While the game looks good in general (despite some weak anti-aliasing), with good texture work, great art-style and solid use of effects that help enhance the fantasy atmosphere (fog, depth of field, etc.), the PC graphics options are an embarrassment: V-Sync and Resolution.

Oh, you can also change between full-screen and windowed mode. And no, it doesn’t make it any less of an insult.

Overall, Chaosbane is a pretty good game if you want an ARPG that plays really well and is fun. It is hurt, however, by very some repetitive level and quest designs, a shameful set of graphics options for the PC platform and an abysmally high price-tag that is nowhere near worth the game’s current content, let alone the special edition that includes a Season Pass.

In the end, I recommend you add this to your wishlist/follow list and keep an eye out for future content/updates but skip it for now when comparing the ratio of the cost/content to other ARPG’s that have way more to give with fewer issues at less than half this game’s price. There are also other games under the Warhammer franchise that have better value for your money, like Vermintide 2 (which on release cost nearly half this game’s price for substantially more content).

The developers seem very attentive to community feedback and are fast to announce new content and updates, so that’s an excellent starting point; this is a must buy on a hefty sale for now though.