This unique platformer stars a ball, but unfortunately rolls downhill as a result.

And you thought your lab job was a pain

Variety tends to be strong with platformers, and in the genre there’s a sub-genre I’d call the ‘ball platformer’, where you’re controlling a sphere of some kind more beholden to physics than other protagonists. Among the first of these would be Marble Madness on the NES, and of course there are a few games of this kind on team. Technosphere Reload is one I’ve taken a look at, and found it to have more than a few rough edges.

You play as an unnamed engineer operating the Technosphere, piloting it into a facility built around an asteroid, which has suffered enough errors to knock the thing clean out of its orbit. You have ten hours to fix things or else it will crash into the Earth. It is a pretty heavy plot, and the underground area you explore in the game does lend itself well to it, with countless elevators, guard-rails, and a sense of the player feeling fairly small in the grand scheme of things. The time limit isn’t a joke, either. From the first level, you’re presented with a timer counting down to when the Earth is doomed. I imagine most players would probably finish the game before they were at risk of losing thanks to the timer, but it’s a nice touch. 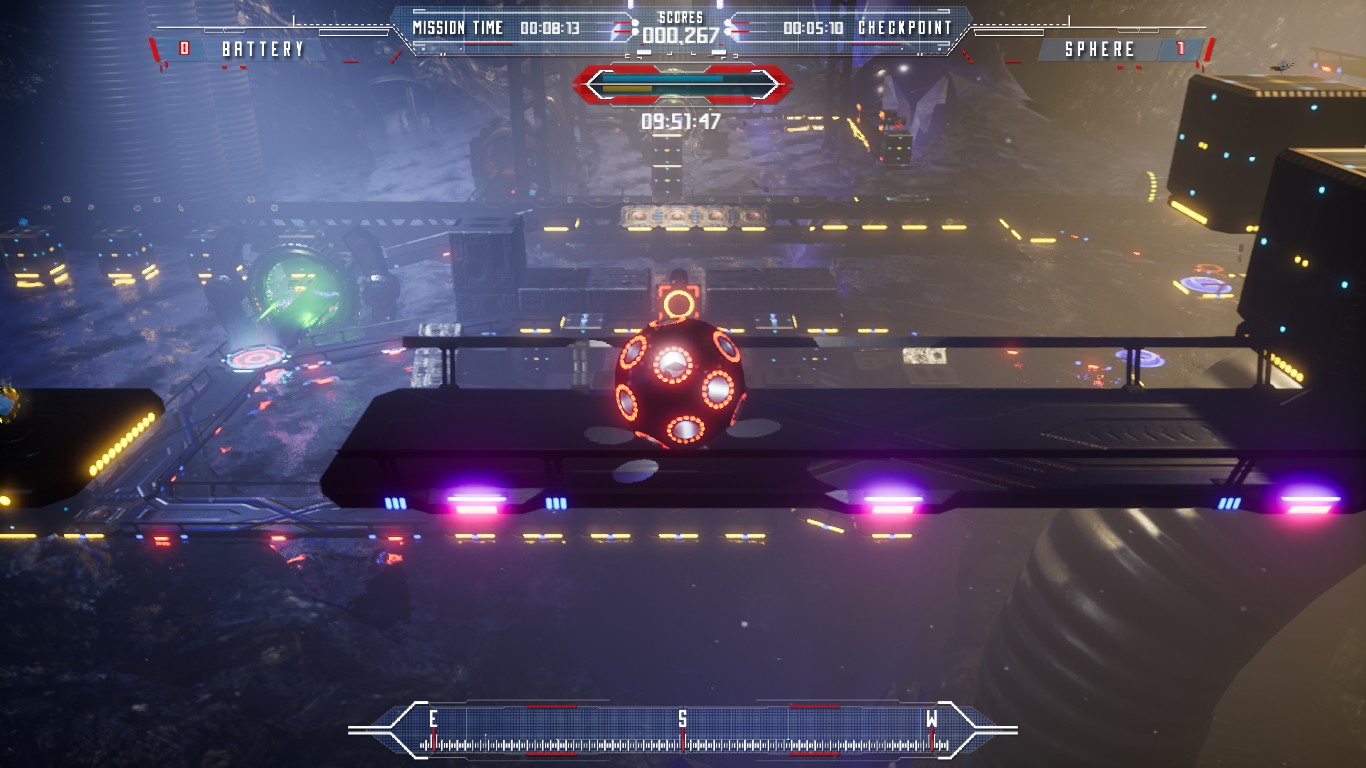 As for the actual gameplay, I unfortunately have less nice things to say than about the presentation. The controls are fairly self-explanatory: you can move the ball in any direction, jump, and flip the camera around in quarter angles, which is useful for approaching an obstacle at the most convenient one. You’ll need to take whatever advantage you can get while playing, as the Technosphere is quite a fragile tool. Any fall off solid ground is typically fatal for it, and even if you land on another platform below, it’ll shatter anyway, presumably to avoid sequence breaking.

I don’t mind a challenge of course, but here it feels like the obstacles you run into were designed just with what would be difficult for the sphere to traverse, rather than what would be interesting for it. In the first few levels I encountered some tricky jumps and moving platforms, but nothing that felt purposely included to get the most out of the gimmick. There are some minor puzzle elements like needing to push blocks and switches to progress (necessitated by sections where you can’t jump), but for the most part it’s just going along making jumps and trying your best to stay on platforms. 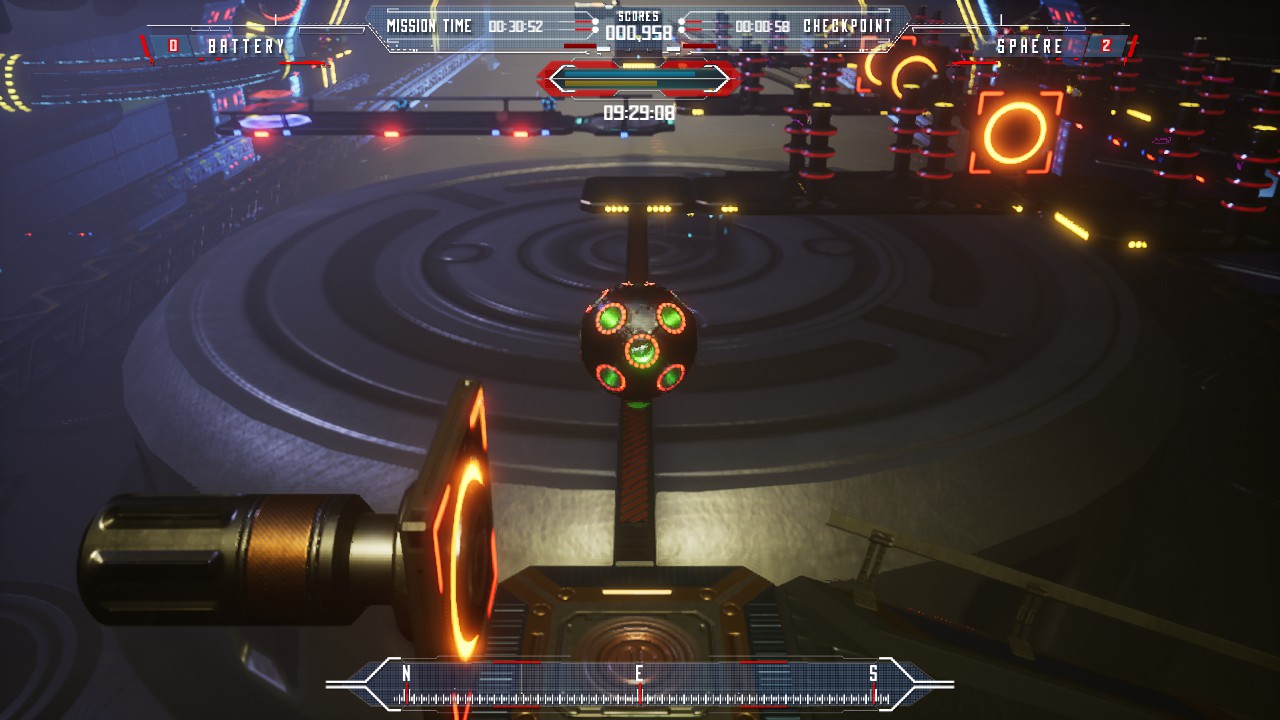 This all leads into a problem I have, as after dying a few times in the first level I noticed a warning in the upper-left that read ‘Last Sphere’. Yeah, the game has a lives system, and while I don’t necessarily think that’s outdated these days it doesn’t seem like they added it for any reason othe than to make things more difficult, which is antiquated when you’re not renting the game in question. You get five before you’re booted back to the start of the level, and since any minor screw-up costs you one that incentivizes playing as carefully as possible.

But you can’t be too careful, actually, because the Technosphere is on a limited source of power that ticks down pretty quickly, forcing you to speed up to grab energy for it. It turns the game into kind of a juggling act where you can’t go too fast, or too slow, and one I didn’t find too compelling. It also seems to clash with the idea of a constant time limit, since you’re getting time back every time you game over; having infinite lives but limited time to beat the game feels like it would be a bit more interesting. 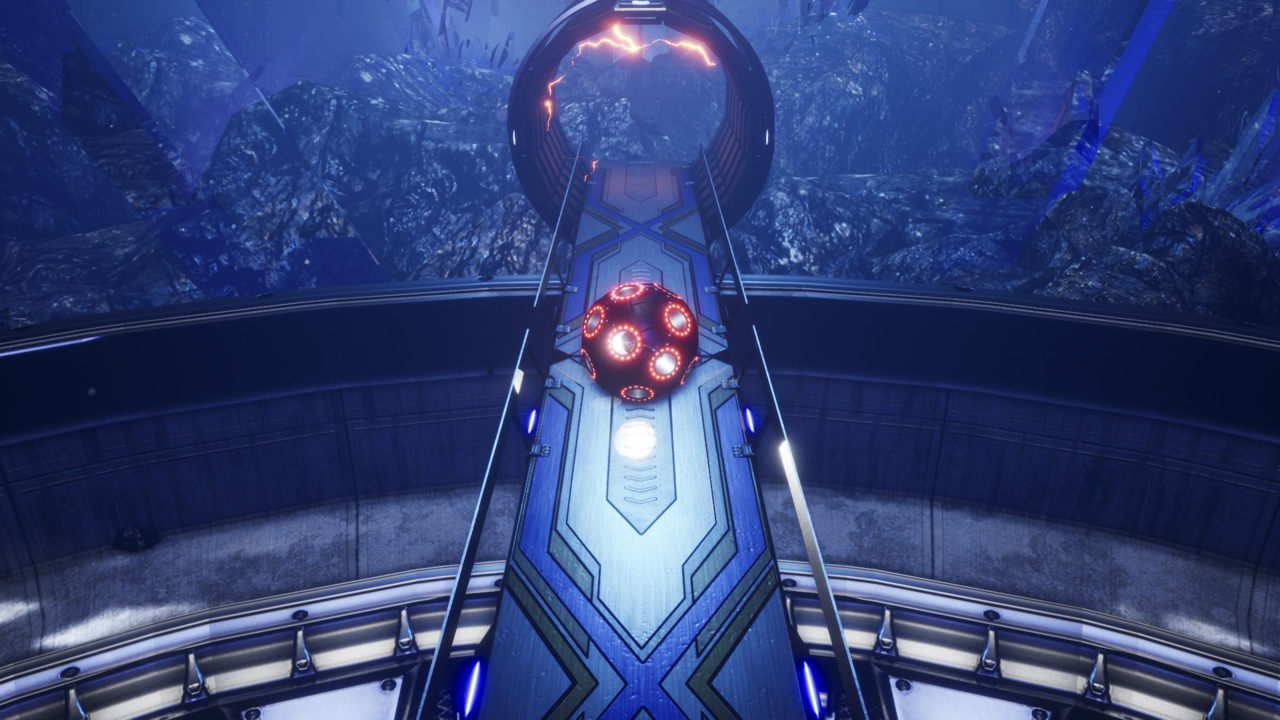 Overall, that’s my main gripe with Technosphere: it seems to equate being difficult with being interesting. The obstacle above is a pretty good example. Would it feel satisfying if I got across that narrow gap and between the bumpers? I’ll say yes, but mostly because then I’d have a higher chance of not having to do it and all the stuff before again. Which, to me, is a failing grade for a game, and unless you really like this style of gameplay or just want something hard for whatever reason, I’d say to stay away from Technosphere Reloaded. I give it a Quit.

We have received the following feedback:

I will be glad if you can add information about updates. Based on the results of the reviews and on the experience of player reviews, I corrected the main problems and simplified the gameplay. Now it’s much more fun to play, easier and there is no need to go back too far. After the update, reviews have become much more positive.

Here is a list of what has changed in the game: