The story of Unruly Heroes is pretty simple. The sacred parchment that maintained balanced was undone. The fragments darkened and scattered throughout the lands as demons came out to play. Guanyin, our narrator and Goddess of Mercy, has enlisted four unruly heroes to bring the fragments back and restore order. Of course, the demons won’t let you through without a fight. 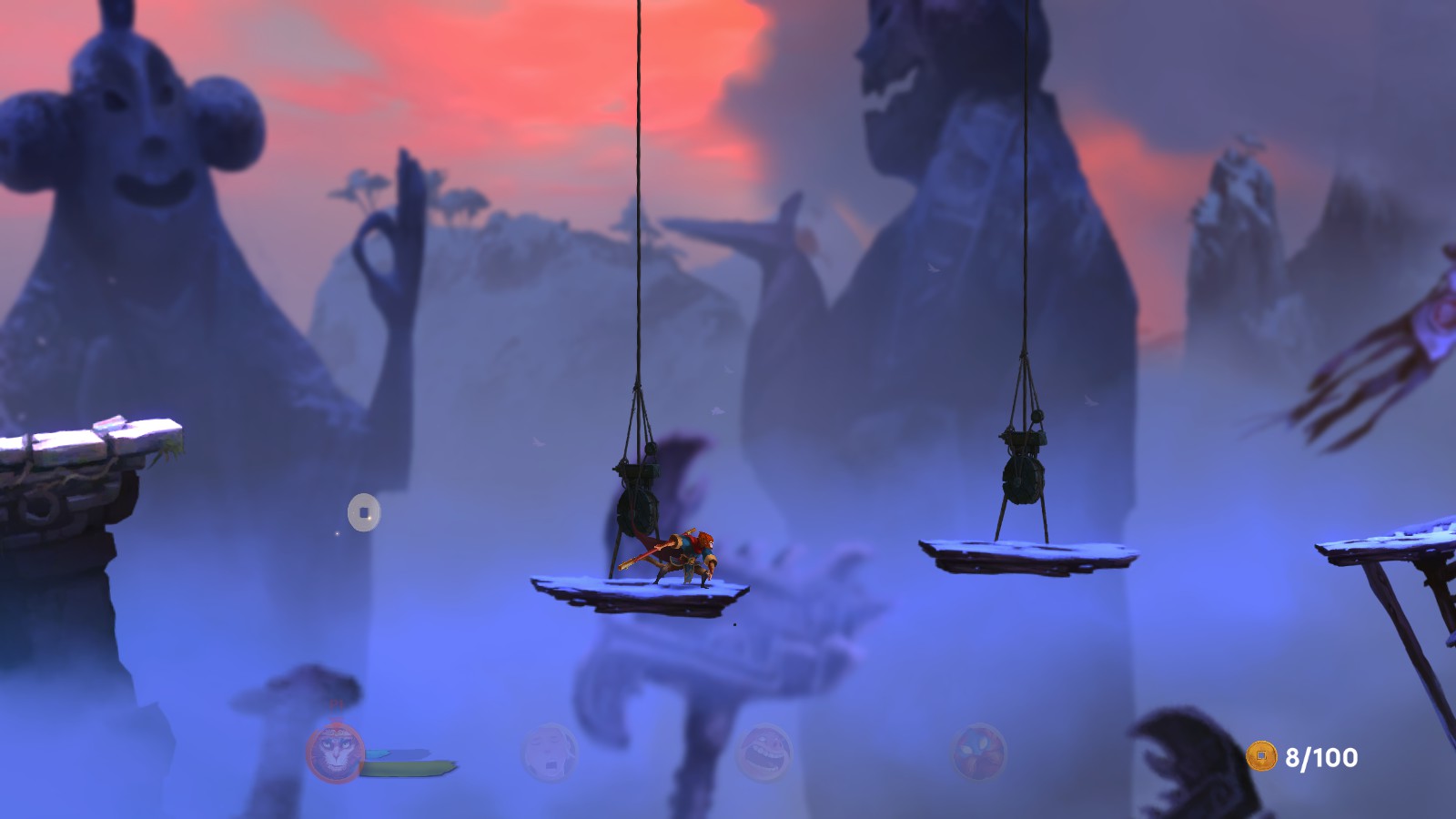 These unruly heroes that you take control of are Wukong, Sanzang, Sandmonk, and Kihong. Each of them has their own role that both helps you with traversing the lands and in combat. Depending on the platforming situation, only two heroes can double jump or glide across platforms to avoid falls or spikes. Most of the heroes also have their own statues that’ll help out. Wukong’s lets him create a staff bridge (but will disappear if you attack with him), Sanzang’s will create an energy sphere you can aim to activate or destroy objects, and Kihong’s will inflate him so he can float upwards. Sandmonk doesn’t have a statue, but there are certain rocks that only he can break. Each level presents it’s own platforming challenge and puzzles, which gets harder with each world (if you thought the first world was hard, oh boy). Each manages to bring something new to the table like letting you possess a mini-boss or having you make split-second decisions.

You also have the challenge of finding collectibles, which can provide some replayability. Each level will have coins scattered around and one hidden scroll. The coins factor into your level rank (along with how fast you were and how many times you died) and you can use them to buy character skins. The scrolls provide you with some extra artwork for various enemies or characters for that world. 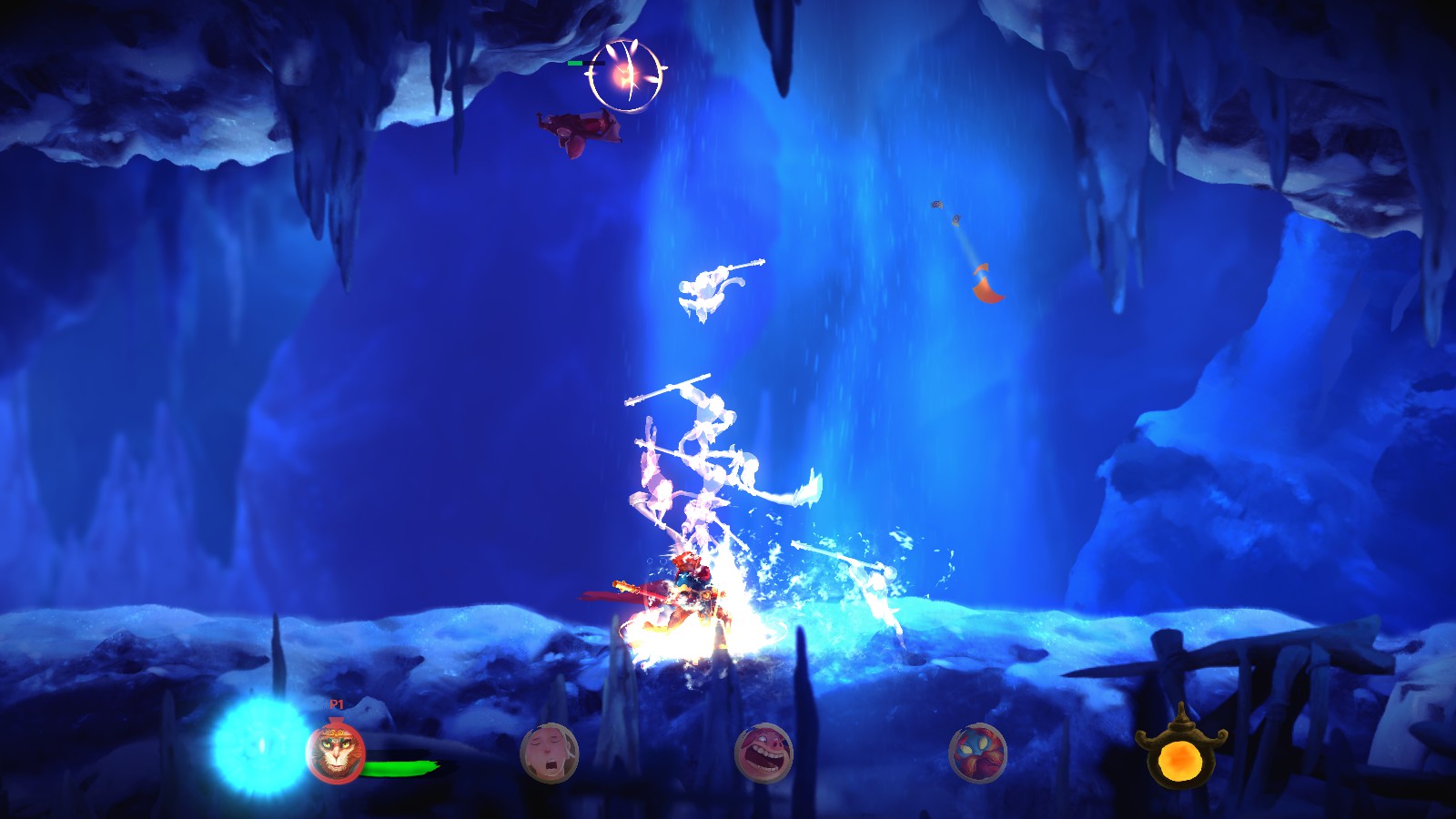 For combat, the heroes have their own weight. You have the usual fast, lightweight characters (which I normally lean towards) and then you have the more slow, heavyweight characters. Apart from their choice of weapon, their combos are alike but some do have a move that will push them forward (like Kihong will roll forward during an aerial combo). Other than this, they also differ with their special ability once you fill up their meter. Wukong and Sanzang both have an area attack with duplicates and light orbs respectively, but Sanzang can do his special while airborne. While both Sandmonk and Kihong are more focused on having you hit enemies, Kihong allows you to jump. It all depends on what the situation calls for. 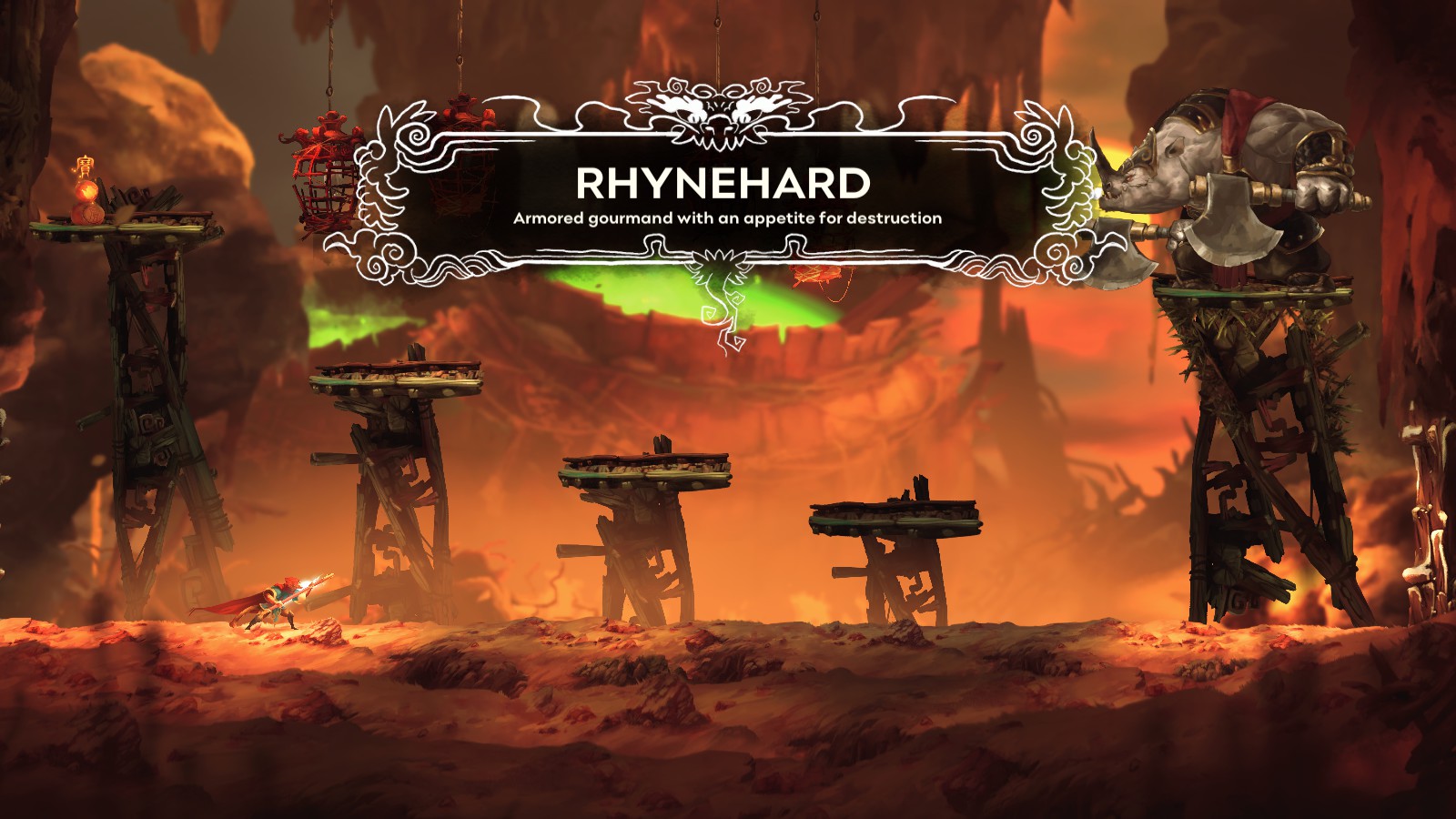 If one of your heroes die, don’t worry too much. Once they die, they’ll slowly come back as a spirit bubble and will have to be popped. However, they’ll come back with around a third of their health and an empty special meter. While you can just leave the spirit bubbles floating if you want to quickly get back into the platforming section, don’t get too comfy with it. Going into a boss battle situation is a different story. If one of the boss’ attacks hits a fully formed spirit bubble, that hero won’t be available for the rest of the battle. This can be a big hit, especially if you meshed really well with that hero or their special was the best for that situation. While I do like this aspect since you’d want to quickly get them back and have more chances, there are some unfair situations. I had my fair share of spirit bubbles forming below the ground, out of range, or a second before an attack would have passed right through. 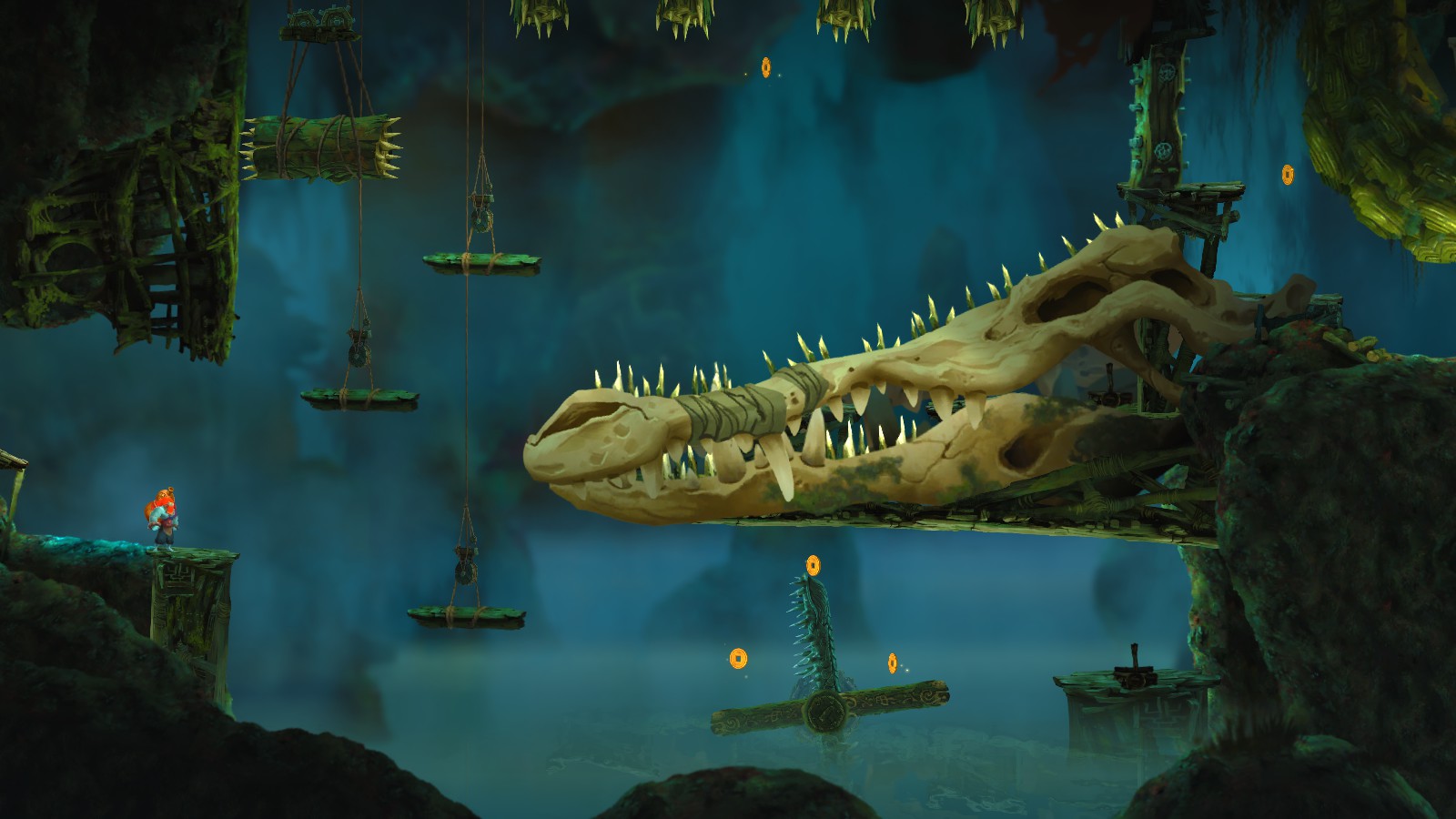 If all of your heroes die, you’ll either have to start from the beginning or start from a lantern. These lanterns will periodically pop up and the only way to light them is to defeat enemies (which you’ll mostly defeat enough anyway, so keep it in the back of your mind). This also has an added bonus of healing all the heroes once you pass it.

Unruly Heroes also lets you play story mode in local co-op if you want to bring some friends over. I wasn’t able to play co-op, but I can see this being even more enjoyable with friends. There is also a Player vs Player where you can fight against others (local or online) or the CPU, but sadly online is dead. There are four maps for Deathmatch, one map for Harvest (where you harvest the most peaches of immortality), and you can even opt for having an enemy counterpart. 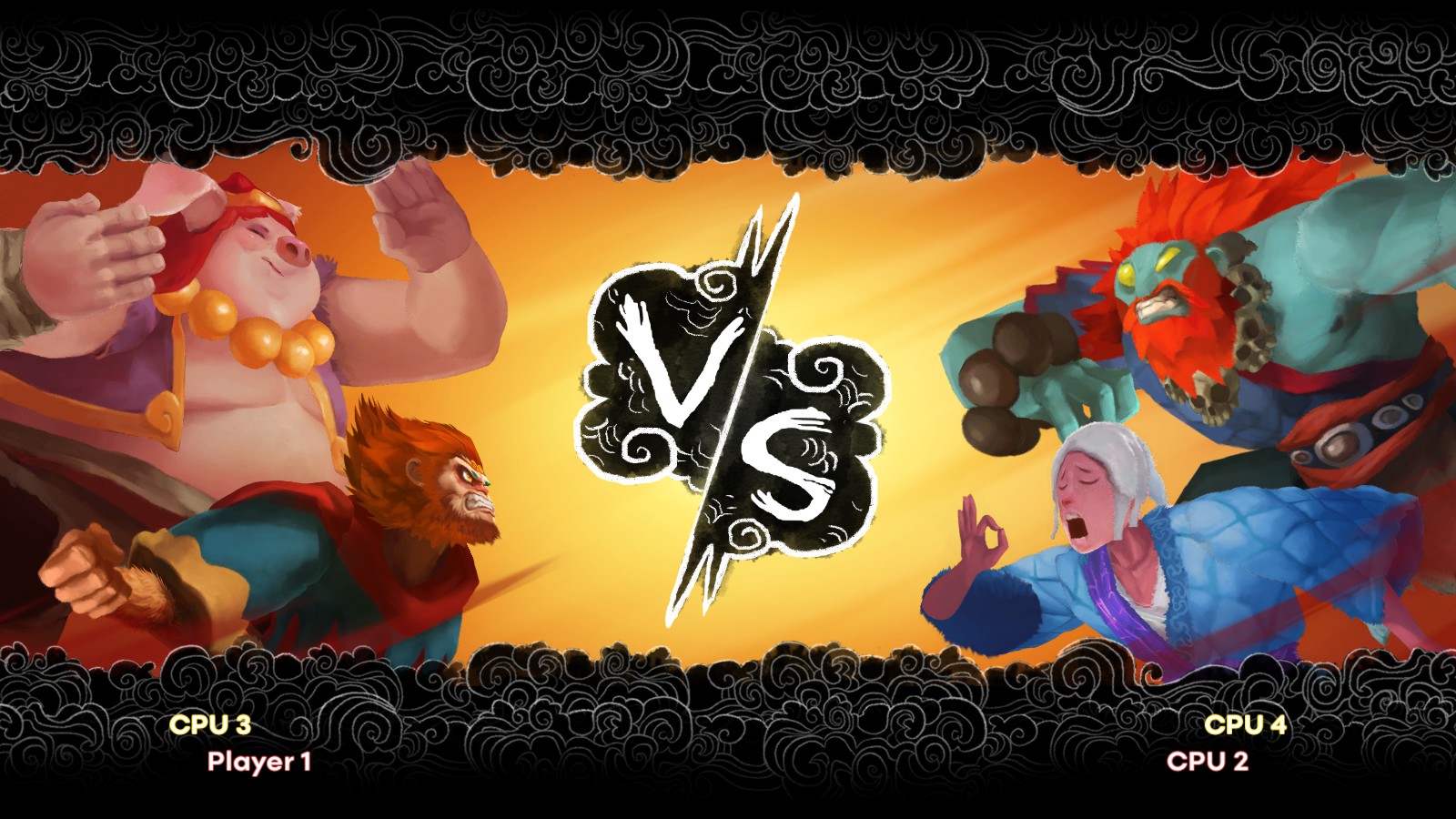 It goes without saying that the artwork and music are absolutely beautiful, and more importantly, wears its Chinese influence proudly. The characters look great, even putting in the small detail of Wukong’s circlet that can give him headaches if Xuanzang sees it fit, and fluid when moving or attacking. At times, I couldn’t help but admire the background. The sound design is also great, bringing along crisp sounds of your landings hitting just right or simply the sound of you hitting the platform. It even almost made me feel bad for picking up and killing the wolf enemies. Almost. The weakest part is the voice acting, but it is honestly charming here. 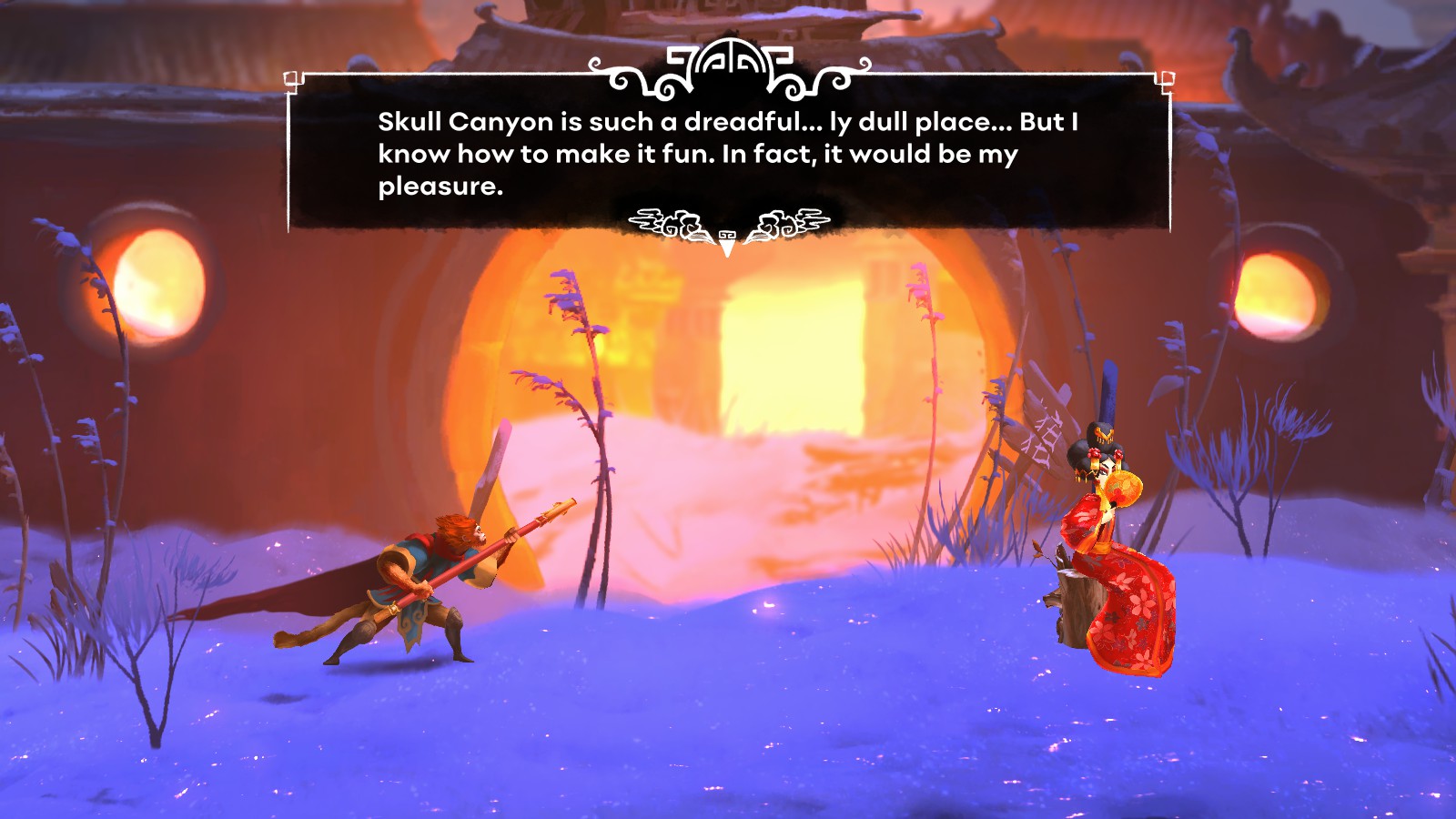 While Unruly Heroes puts more focus on combat and platforming, there’s no reason not to look into the inspiration. If you don’t already know, Unruly Heroes was inspired by a Chinese novel called A Journey to the West. The characters here are the more direct references: Wukong is, well, Sun Wukong, the quadruple immortal Monkey King wielding a roughly 8,000 kilogram staff; Kihong is Zhu Bajie (Pigsy), a pig demon wielding an iron rake; Sandmonk is Sha Wujing (Sandy), a river spirit with a magic staff; and finally Sanzang is Tang Xuanzang (Tripitaka), a monk who’s the reincarnation of the Golden Cicada. Guanyin also shows up in both, but she has more to do in the novel. Unruly Heroes takes place shortly after everyone is together and when new enemies routinely come around to cause some trouble, which Unruly Heroes roughly based their enemies on as well. For example, you’ll run into the first main boss, The White Lady, in the first level. I believe she is supposed to be Baigujing (or White Bone Spirit) since they have the same real form, but here she’s more forward in being devious. Focusing on this part was smart for the type of game they were going for, even though I do wish the story was a bit more focused. 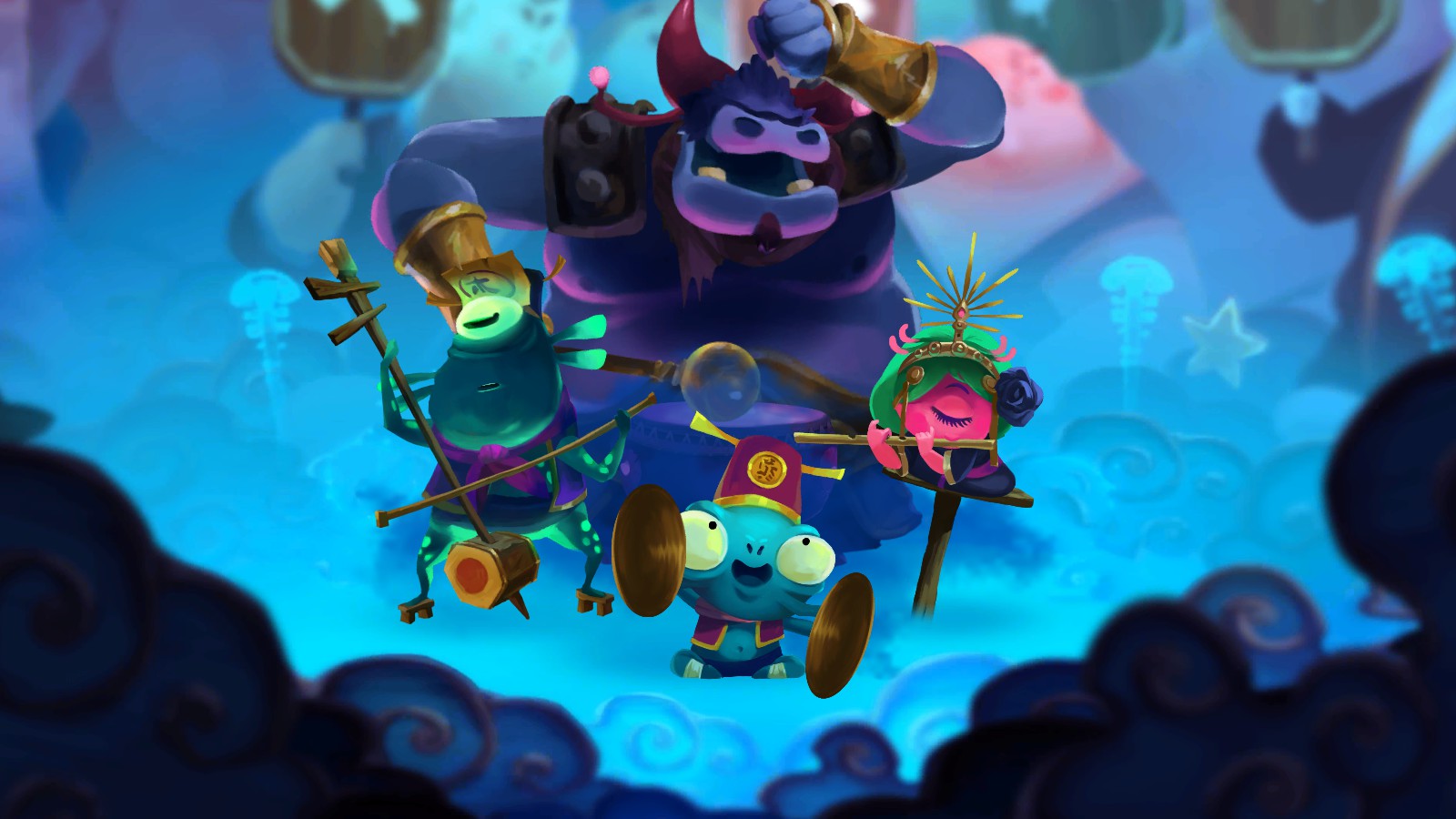 Despite the fact that I wanted the story to be a bit better and a few minor small flaws, Unruly Heroes was really fun to play. It manages to bring something new to each level as you admire the beautiful artwork and music that goes along with it. Heck, there’s even a cute, small band during the loading screen that will play when you hit the action buttons. Even when I was at a particularly frustrating platforming bit (where I may have… died 51 times) or just can’t get past a boss phase, the frustration didn’t linger at all. If you love platformer fighting games like this or loved the Rayman series, Unruly Heroes will be right up your alley, especially if you can get a couple of friends that can tag along.

If you’re interested in learning more about what happens in Journey to the West, but don’t have the time to read the books (or the money to buy them), I highly suggest Overly Sarcastic Productions video series over at Youtube. There are also a lot of adaptations that you can watch if you’d rather go down that route as well.