Get ready to return to the mystical realm known as Tangledeep. Uncover the lore behind “Shara’s Story” in this gripping new DLC. The Premium roguelike just got even better. Read on..

Legend of Shara is a full expansion to Tangledeep, adding breadth and depth to every aspect of the game for players of all skill and experience levels! From new early game floors and monsters to wild new post-game content and everything in between…

A new tale in the world of Tangledeep with a unique story, boss encounters, and new gameplay

Increased level cap: from 15 to 20! With this new level cap comes even more powerful items and challenges to discover.

Dozens of new monsters with new powers! You can capture and tame them, too!

I previewed Tangledeep way back in July 2017. Since then the game has come along way. The full Steam 1.0 build was released in February 2018, along with a very successful launch on the Nintendo Switch. Now the first DLC has arrived, bringing with it, a new story campaign, new gameplay mode and a brand new job(class) to play around with.

Before I dive deep into the new content I’d like to highlight my preview, it may prove useful for folks new to the game and roguelikes in general. I’d also highly recommend a read of my fellow SoQ colleague RGK’s excellent article on the misconceptions around the roguelike genre name and other games based on its systems. 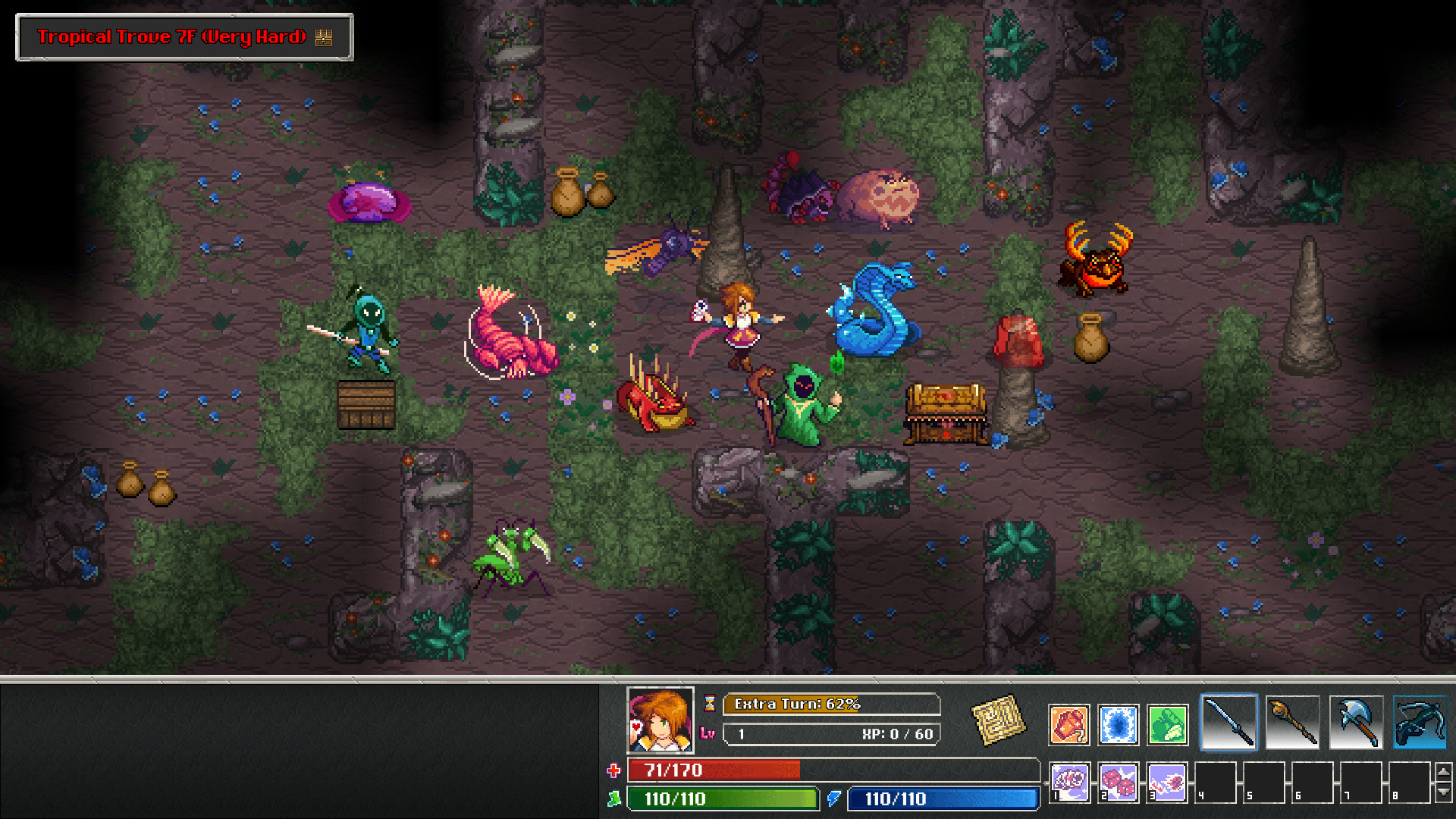 The new DLC quest “Shara’s Story”, fundamentally changes core mechanics and offers a very different and challenging experience. First off, there is no start town/hub area. Initially, you cannot teleport back to this safe haven. So the last resort of warping back to a neutral zone is not an option. The job system has been removed and replaced by a much more creative random skill system. These can be unlocked by opening Pandora’s Boxes. You can pick one from the choice of three skills, these are randomly selected from a pool of regular job abilities. Choose wisely as the two abilities not selected will not be shown again. Resting at a campfire gives you the option of several random Shara-only abilities, of which you can pick one each time you rest at these peaceful glades.

Shara doesn’t gain levels. Instead, JP points can be spent to level up your main stats such as Strength, Swiftness, Spirit, Discipline and Guile. JP points are rewarded in the usual way by defeating foes, the bigger the baddie, the better the payout. Tweaks in the way monsters appear in levels has also changed. There’s appears to be a finite number of creatures that inhabit every area. So farming /grinding easy critters to boost your stats only works for a while until the resources dry up. This is a clever system and pushes the player further into the adventure and adds to the challenge.

All these systems combine to make every run new and exciting. By adding random skills and tweaking the gameplay, players are forced to adapt and evolve their usual style. This is both rewarding and compelling. By discovering new skills and combos, fresh tactics emerge. Not knowing what your next ability is negates any kind of forward planning. This uncertainty is thrilling and invigorating. It kicks out the hope of building the usual roguelike archetypes like Tanks, Range specialists and Spellcasters. Every new hard-fought ability earned has to be well thought out and pondered on. 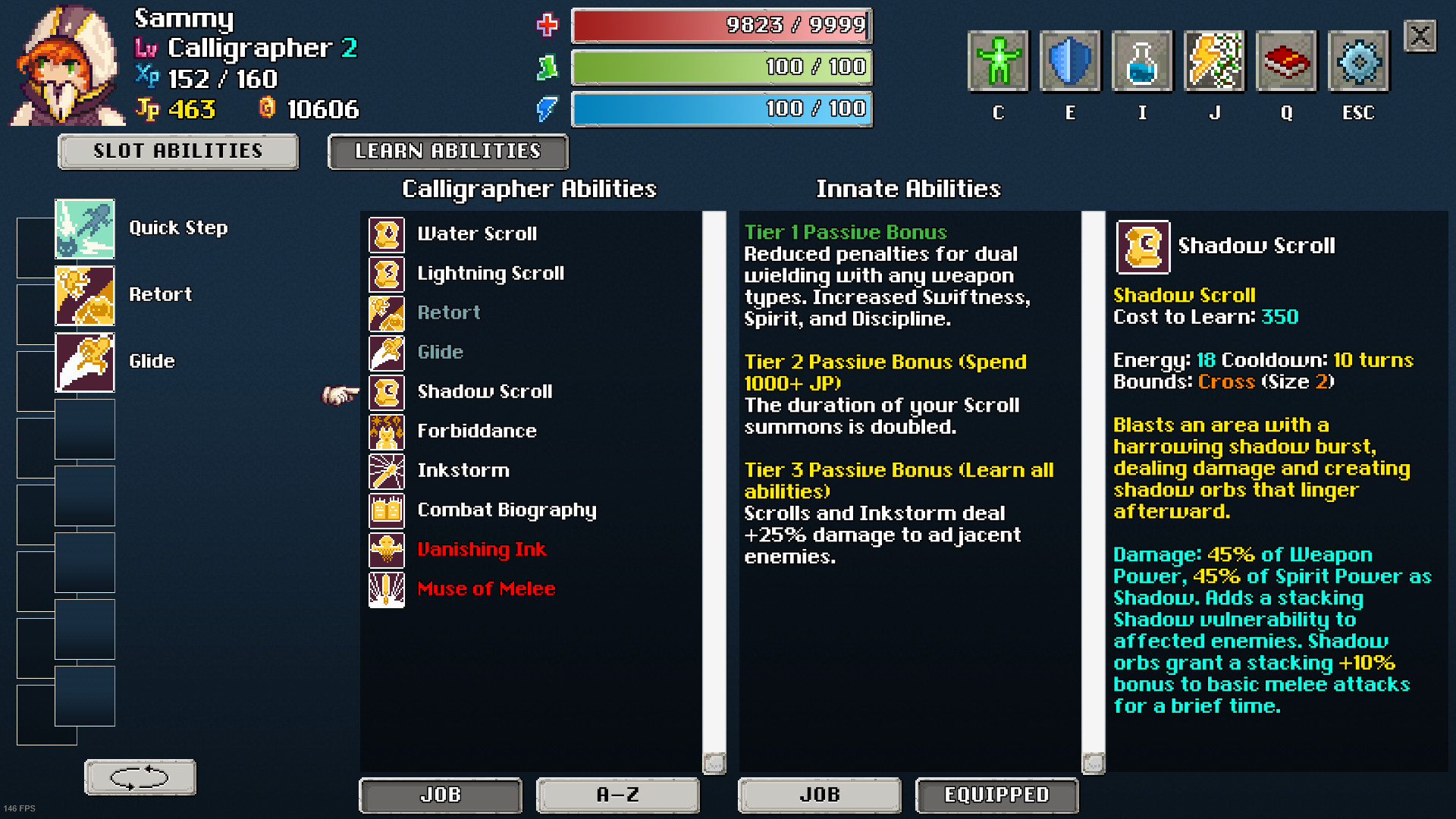 Shara’s story acts a prequel to the main narrative. During this new adventure, you will bump into many of the old characters from the previous game. It’s fun to meet up with these folk again find how their past escapades have moulded their current situation. The campaign is based in the same locations but new cutscenes have been added along with lots of witty banter.

Another new addition that has been added is the “Wanderer’s Journeys”. This takes the form of a randomly-generated adventure that ranges from 10 to 50 floors. Each “Journey” has an entirely unique dungeon layout. The one I tried was based in an idyllic open meadow environment. According to the press blurb, other settings can be generated, such as tight corridors and interconnecting rooms (classic mystery dungeon format). Diverse biomes add a fresh feel to every session.

The initial game shipped with nine Jobs(classes). Updates over time have added a further unlockable three. With this DLC the total now comes to thirteen. That’s a massive amount of variations in character customisation. The ability to change jobs and keep your old abilities really doubles down on the options for the player. By cherry picking your favourite skills you can create a truly hybrid class. What a hunter/mag/stealth build. You got it!

All in all, Tangledeep is chock full of content. Looking at my steam stats I’ve currently sunk 100+ hours into the main game. I’d venture there is at least a further 100 hours of gameplay in this new DLC. I’ve stuck mainly to the pure dungeoneering and haven’t touched some of the other features in the game, such as capturing and breeding pets. 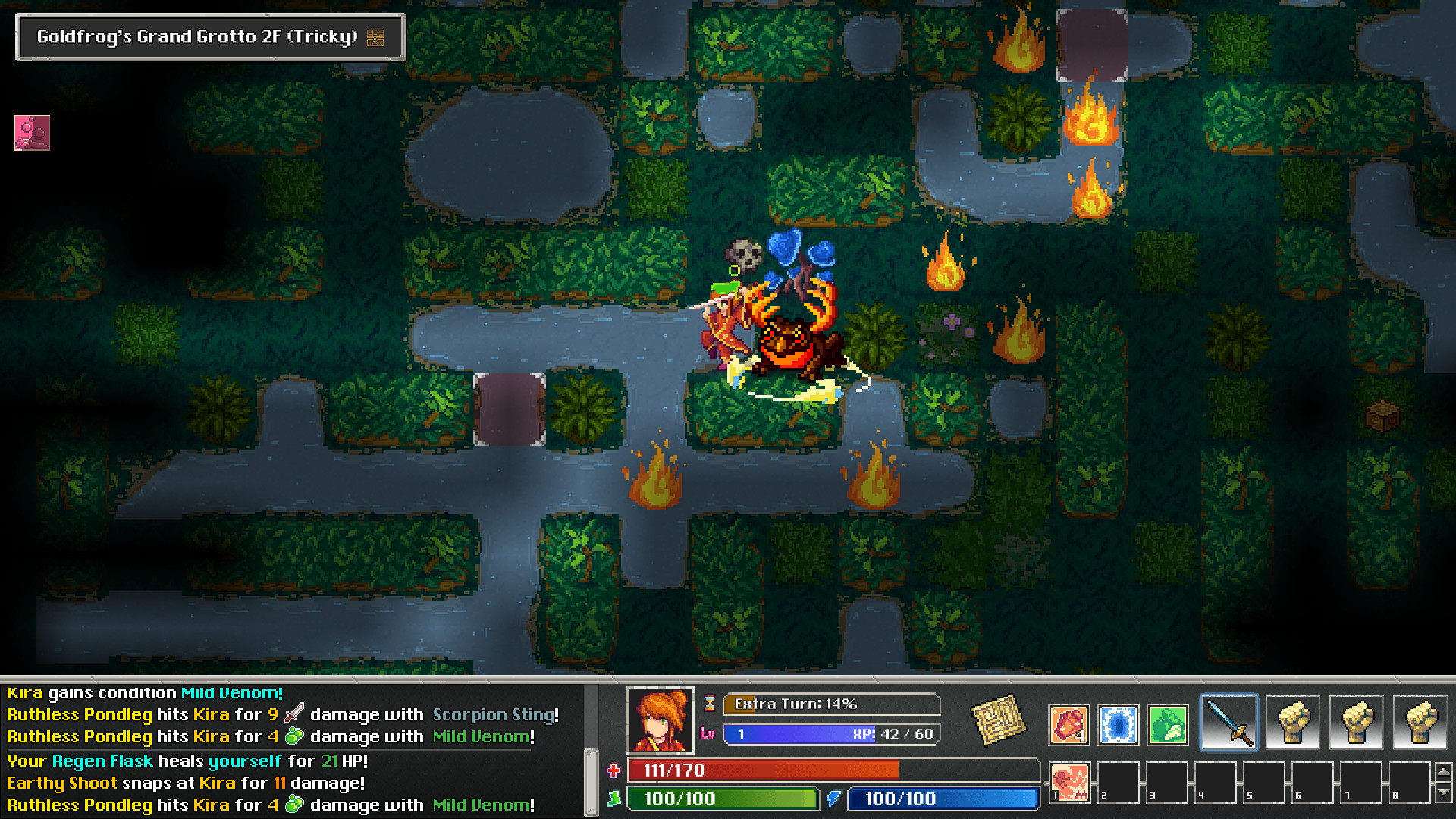 During my play session for the DLC, yet another update was uploaded to the Steam store. This cures my only minor quibble with the game. Due to the sheer scope of the title, I was feeling limited by the old allowance of four save slots. This has now been addressed by increasing them to fifteen! You can now have a separate slot for every Job and still have wiggle room. In addition, a new post-game mode has been introduced. “Savage World”, provides the ultimate challenge for Tangledeep vets. Even harder than the newgame+ mode, this allows players to forge 4th tier mods to their weapons via the dreamcatcher and duke it out with “uber” tough foes.

This patch highlights the continuing support for the game. Two years after it’s initial release in early access, the developer is still providing new content, squashing bugs and tweaking gameplay systems. This is no 6-month Unity vanity project. The transparency of the process is fantastic, Twitch videos of real-time coding sessions, a vibrant discord server and easy access to the team, have generated a really passionate fanbase. This is what indie gaming is all about. 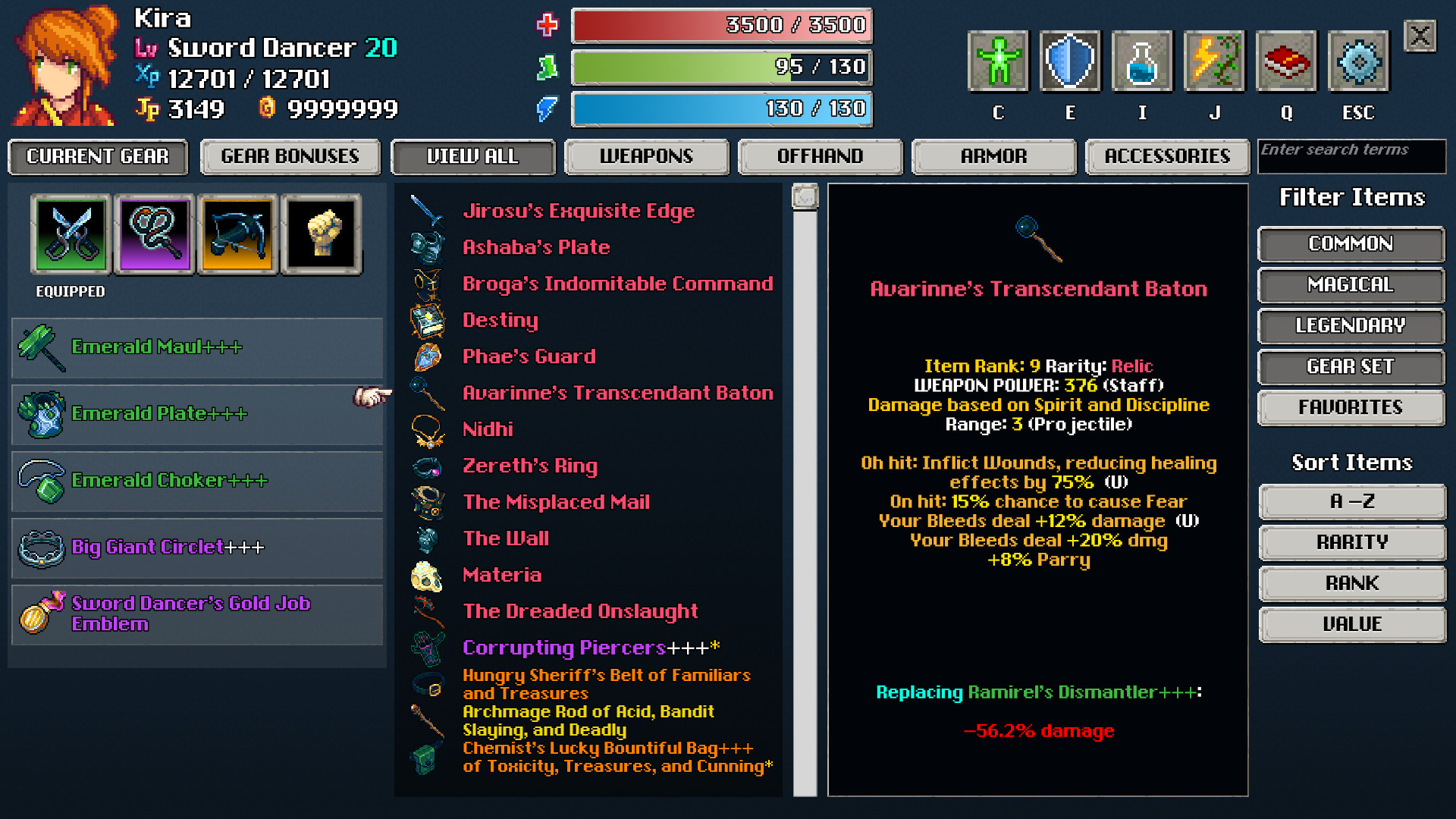 I don’t normally comment on the writing in games, especially in dungeon crawlers and roguelikes, they are usually flimsy affairs, low on plot, poor on character development and complete with pretty rote scripts. Whilst the main story arc is a fairly standard story, the flavour text for items and NPC interactions is exceptional. The back and forth retorts before a boss battle and side missions are hilarious. Internet memes, characters who are criminally lacking in self-awareness and a heavy dose of dry acerbic wit are the order of the day. I believe Jim Shepard is the author of all these snippets of buffoonery. They add a light-hearted tone to the whole proceedings. Roguelikes tend to be quiet dry and without much personality. This is definitely not the case here. It’s a proper chuckle-fest. 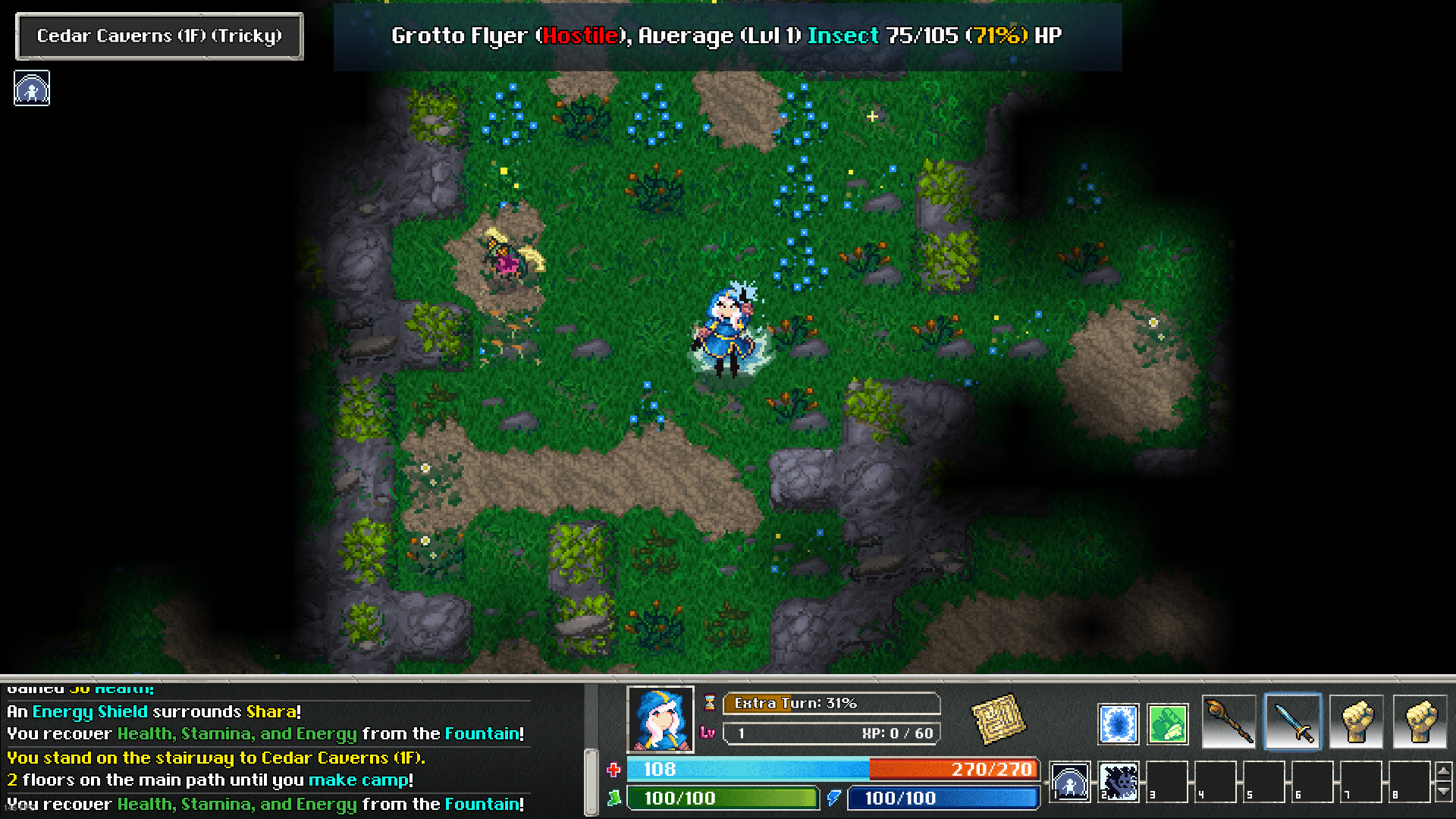 The same classic SNES era pixel art remains. Any crusty gamers who have fond memories of playing the likes of Chrono Trigger will feel right at home. The DLC art is in keeping with the main game. Tweaks and polish to the tilesets have been added, giving the whole experience a quality sheen. The GUI has been amended in some areas to make it more readable and easy to navigate. 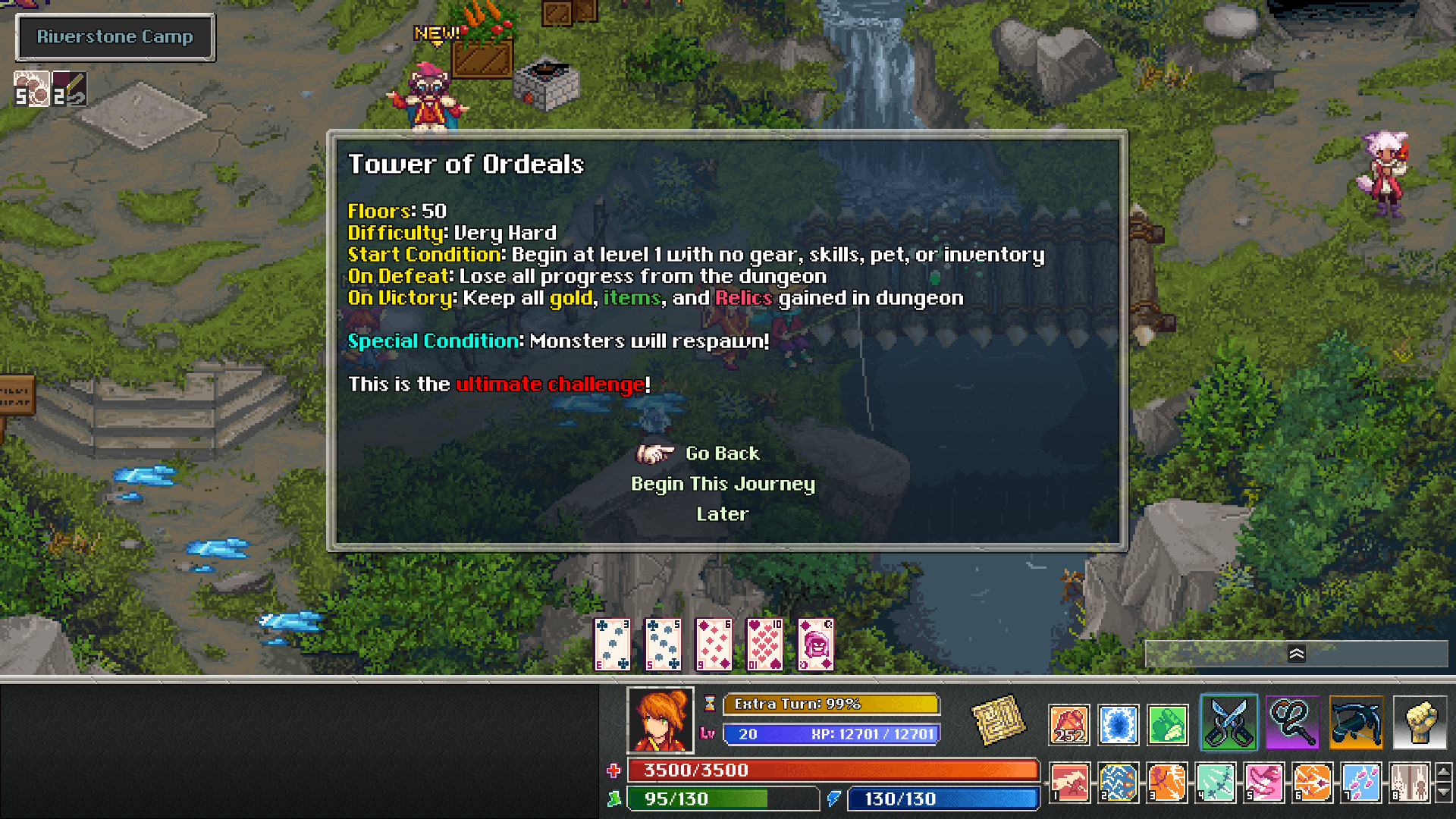 The soundtrack that accompanies the retro visuals is stellar. Given the dev’s history and expertise in compositional and audio software, it comes as no surprise. A veteran of the ocremix scene and a proper bona fide professional game soundtrack composer, Andrews’s tunes are superbly crafted pieces, that would not be out of place in any classic 16-bit era Square-Enix, Chunsoft or Capcom title.

A fantastic surprise for me was the inclusion of the DLC soundtrack in FLAC and MP3 format. This should be a standard in all games. Now you can play the songs anywhere, anytime and on any device. This is an awesome free addition and is a great token of goodwill from Zircon to the fans of the series. 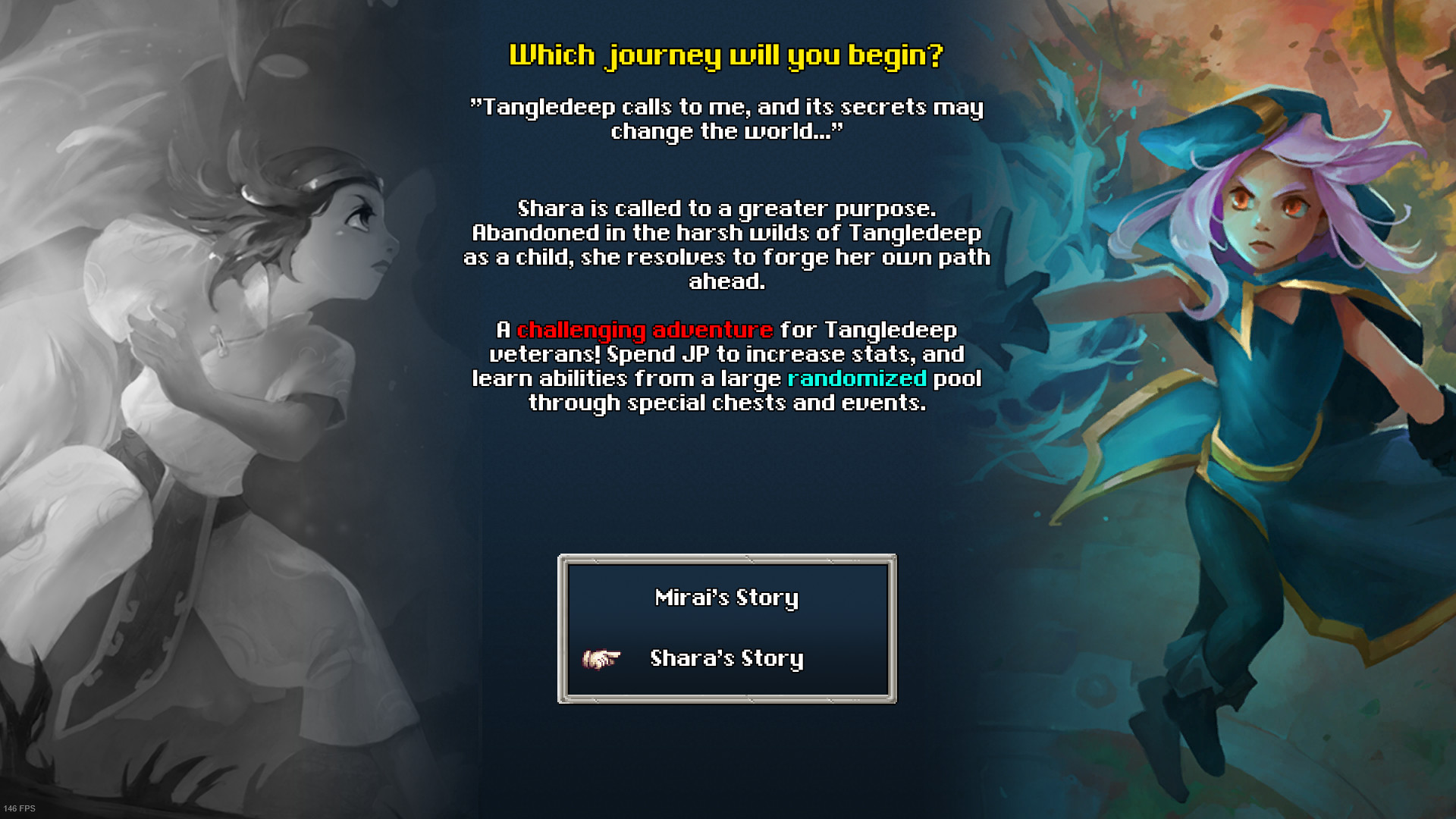 Tangledeep has set the best of class for ease of use. It is replete with so many features to make your adventures as painless as possible. All control schemes are supported and highly customisable. All functions can be rebound regardless of the input method. This includes keys, gamepads and mouse buttons. Even features like cursor repeat delay and button deadzone can be fine-tuned.

Item and inventory management has been streamlined and automated, allowing players to concentrate on game strategy rather than spend time fiddling and fussing with backpack busy work. A prime example is an auto-equip on the pickup of weapons. This is great in the early part of the game for new gamers. Bows slot into their allotted “pocket” allow you to seamlessly use them as a ranged weapon whilst still using a sword as a primary melee device.
Offhand items auto pair with the appropriate weapons, Bows with magic quivers, One-handed Scimitar with shields. This is a great help in high-pressure moments, Once set you can forget about having the right item combo and just focus on the skirmishes.

Tooltips abound on every part of the interface. Mouse roll over a stat, item or weapon and a handy dandy context sensitive snippet of text pop up getting you up to speed without taking you out of the game. For more information, a built-in help guide breaks down all the gameplay systems and fundamentals in a very legible manner. 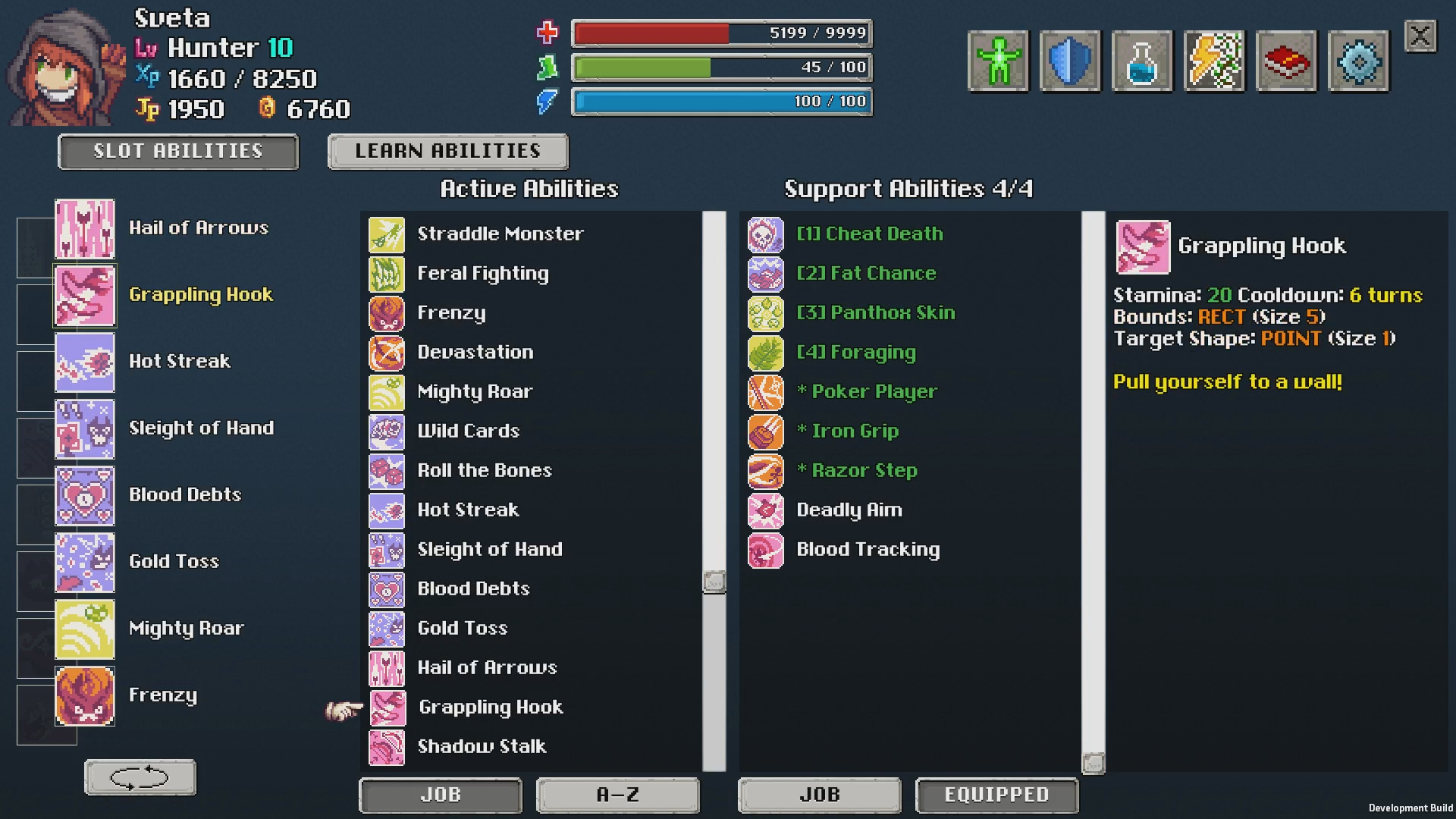 I’ve played many many roguelikes over the years. Each has its strengths and weaknesses. I’m scratching my head if there’s anything I could knock about Tangledeep in its current state. The user interface, content, graphics and audio presentation are all top notch. For folks new to the genre there are so many clever design choices that will make any player feel at home and in control of their first adventure. For grizzled veterans, there’s plenty of rock hard challenges with the end game content and so much great loot to search out and equip. Tangledeep is a testament to dedicated indie development. It is the gold standard roguelike, except no substitutes.