REVIEW: Nelke & the Legendary Alchemists: Ateliers of the New World

It’s been 20 long years since the first Atelier opened for business in the far off mythical and wonderful land of Salburg. Since then, many more Ateliers have made an appearance spreading their alchemy across the impatiently waiting world.

Everything Old is New Again

With this game being a celebration of the 20th anniversary of the series, I’d love to say I’ve been there every step of the way, but unfortunately the early titles were only released in Japan. I originally started playing with Atelier Firis, the second of the Mysterious arc, and then jumped back to Atelier Sophie, the first of the Mysterious arc. From there I happily branched out and played almost every English Atelier series game I could get my hands on. Nelke & the Legendary Alchemists: Ateliers of the New World is the latest entry in that most enjoyable series and serves as a grand gathering of alchemists and other characters of the past allowing you the privilege of revisiting some old friends while also introducing you to some new acquaintances.

Nelke & the Legendary Alchemists is quite divergent from the more recent Atelier titles in that it is almost an entirely different style of game. Your standard Atelier title usually has you playing as a would-be alchemist who slowly hones their skills into a respected expert status over the course of the game. The game typically features a visual novel style story delivery with characters on the screen delivering dialogue in a fairly static way on a static background. You are given tasks to complete which invariably requires you to either make something with alchemy or go out adventuring to collect much needed synthesis components for alchemy. While you are out adventuring you will collect goods scattered around and fight off some monsters along the way giving it more Action-Adventure feel. When it comes to Nelke & the Legendary Alchemists the visual novel elements are still very present, but the core gameplay is considerably different. 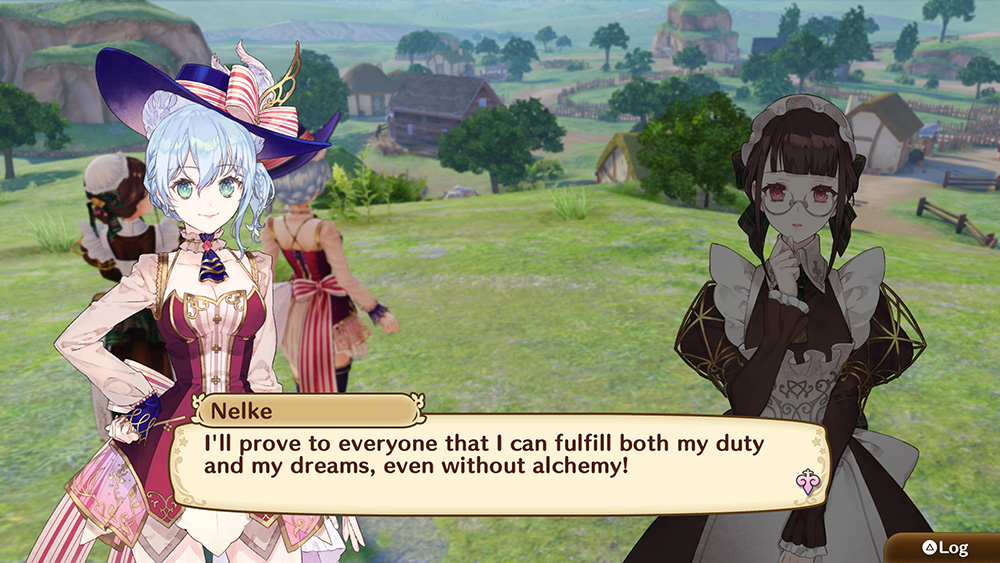 Nelke & the Legendary Alchemists: Ateliers of the New World is mostly a City Builder and Management Simulator. The namesake, Nelke, isn’t even an Alchemist this time around. She is an Administrator for the town, tasked by her father to take it from next to nothing and develop it into a bustling, thriving town. You have two phases to play around in and each one is handled differently. There are the Weekdays and the Holidays (Weekend). The Weekdays allow you to instruct your Ateliers, Stores and Adventurers what they should do as well as gives you time to build new infrastructure. Only Alchemists and Fairies can be assigned to Ateliers, but for any other job pretty much anything goes. You will get a steady supply of characters joining your town so it can sometimes be a challenge to use everyone effectively. Most buildings take at least one turn to build so typically the first thing I make any newcomer do is go out and collect materials. After that I assign them to a more permanent task better suited to their skills. On Holidays, Nelke visits some of her new friends, orders research done and also can leave the town to go on investigation adventurers of her own. The adventure element isn’t exactly what I was expecting going in, but it isn’t so bad once you get used to the idea of never actually properly controlling your characters. You see, it’s kind of on a rail. The characters walk forward automatically, harvest things automatically and will, if you let them, battle enemies automatically. In combat, you can choose between manual control, semi and full auto control. Manual has you tell the characters what to do, semi-auto has it do its best guess at what it should do and also lets you still tell them what to do if you want to, and full-auto basically lets you sit back and watch the action unfold. Successfully completing the investigation will unlock at least one new area for you to explore next time. 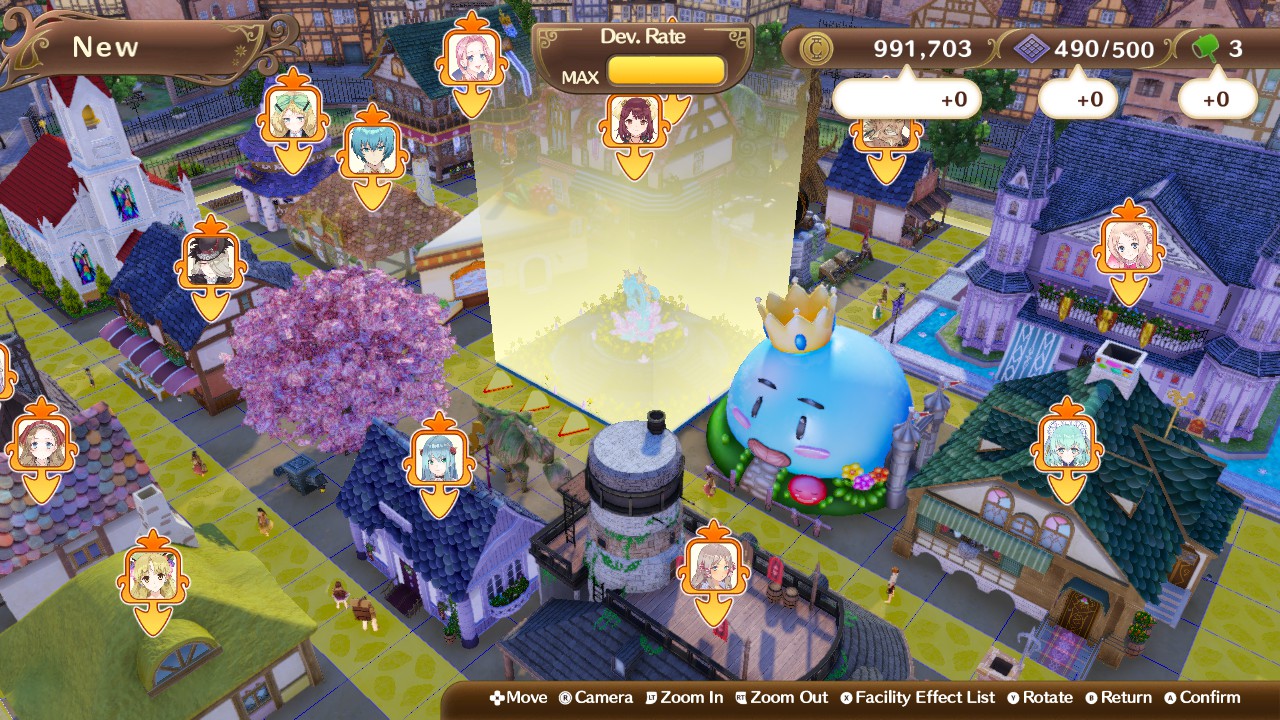 The real gameplay here is the town management element. It isn’t the most in-depth town management game I have ever played, but considering it isn’t the style of game the series is used to, it actually is pretty good for what it is. There is enough going on to keep it interesting even if the days do sort of blur together as you go. You can’t just spend freely as you are only able to build a couple of things each turn and you have to be cognizant of your budgetary spending. If you spend more than you earn, you will eventually upset your residents which will lead to a lowering of their support of you. Keeping the people happy and growing your treasury will help lead your fledgling town into a city that will make your father proud of you. As you progress, new buildings will be unlocked allowing you to further expand what your city has to offer. While you may be tempted to start out building efficiently with minimal wasted space and gaps, when the next tier of building is released you will quickly find that you are needing to bulldoze the old to make way for the new, rather than just upgrading the existing infrastructure. 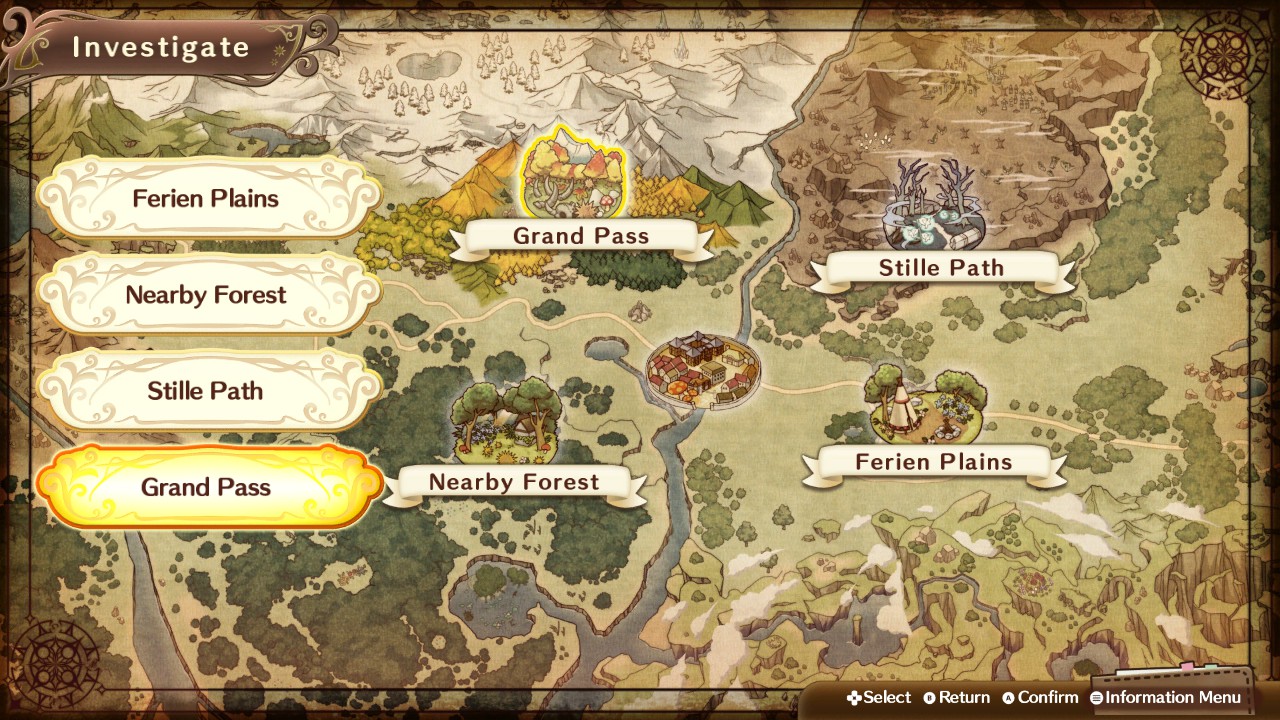 The tasks and request system help drive the game by somewhat guiding your hand in how you develop your town. The requests are all pretty random but the tasks are consistent. For example, the primary task may be to have positive income for three rounds in a row. Something that sounds relatively simple, but actually cost me my first game. I had two days in a row that were good, followed by a disastrous day that for some reason I couldn’t recover from in time. The next few days were also in the red and then I failed to meet the deadline. Luckily if you fail, you do get some perks that carry over to help you out a little bit. While I can’t say I really felt those perks help me, it likely was due to the fact that the game over occurred so very early on in the game. Overall most of the tasks and requests are not too challenging to do, but you will likely miss quite a few of the requests simply because of how short of time they give you to complete them and having too little time/infrastructure to do all of them simultaneously. 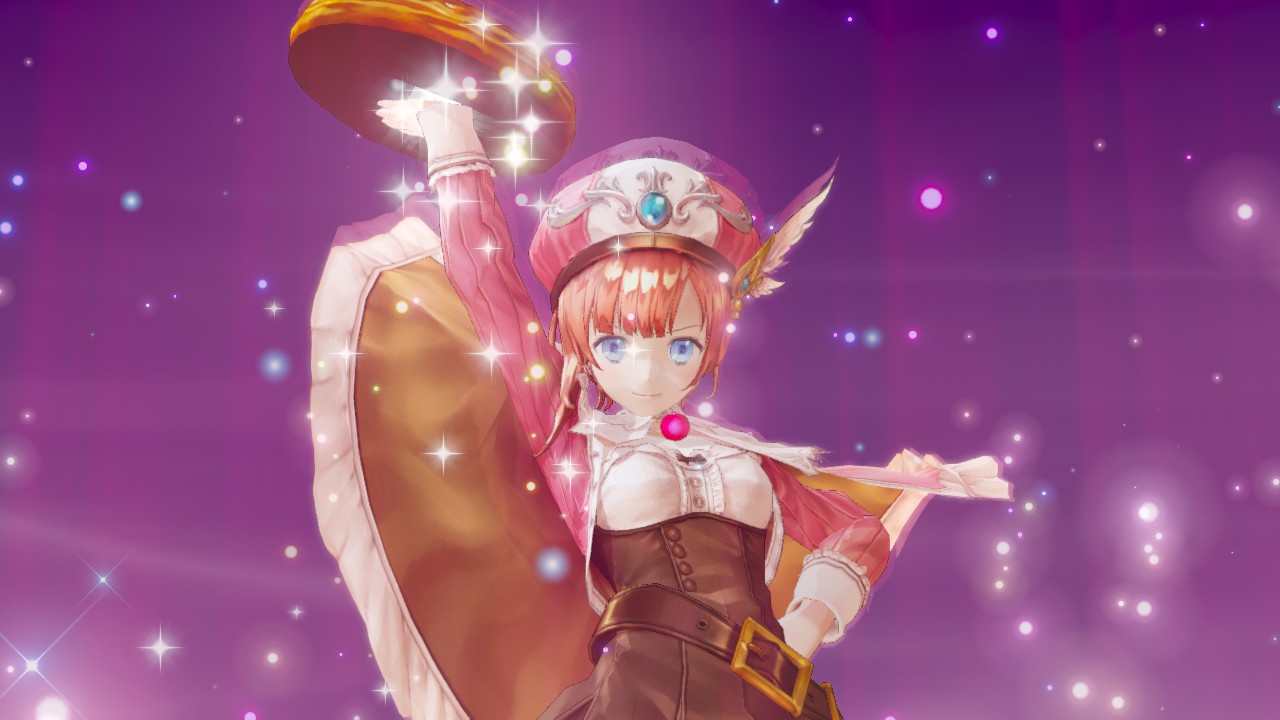 Graphically, the game looks similar to most modern Atelier games when it comes to the Visual Novel sections. The characters are all fairly highly detailed and quite interesting to look at in both their 2D and 3D forms. Each one looks unique enough that it is easy to tell them apart. While many of the older titles had to have their art-style tweaked a bit to match the modern Atelier characters, they all look true to their root games. The buildings come with a few different colour schemes to choose from, with even more available from DLC, so you are able to customize your town how you want it to look. If you originally built it with a green roof, but your new colour scheme would be better suited for a red one, you can easily remodel it without having to bulldoze. Lastly, when you are doing the march down the road, the monsters you encounter look decent in their 2D form, many of which are easily recognizable from the previous games. 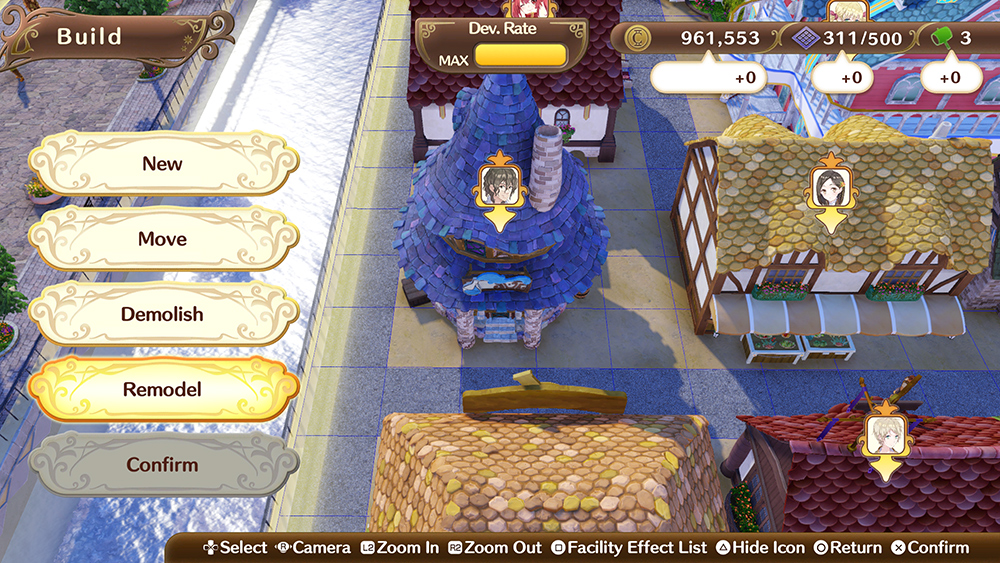 The sounds in this game are a bit mixed for me. The music and sound effects all work quite well and do help with the enjoyment of the game. One thing that in my book is always a detractor, and in my friend’s book always a positive, is the fact the game is only available with Japanese voices. There is nothing wrong with that, and it is actually something I am getting used to due to my eclectic tastes in games, but I would still rather understand clearly what they are saying rather than relying on subtitles. The fact that pretty much every character interaction is voiced is quite impressive. I’d be even more impressed if it was English, but I will take what I can get. When you are walking along the road, the characters tend to repeat themselves quite a bit, so on a positive note, maybe I will learn a little Japanese just from playing this game! 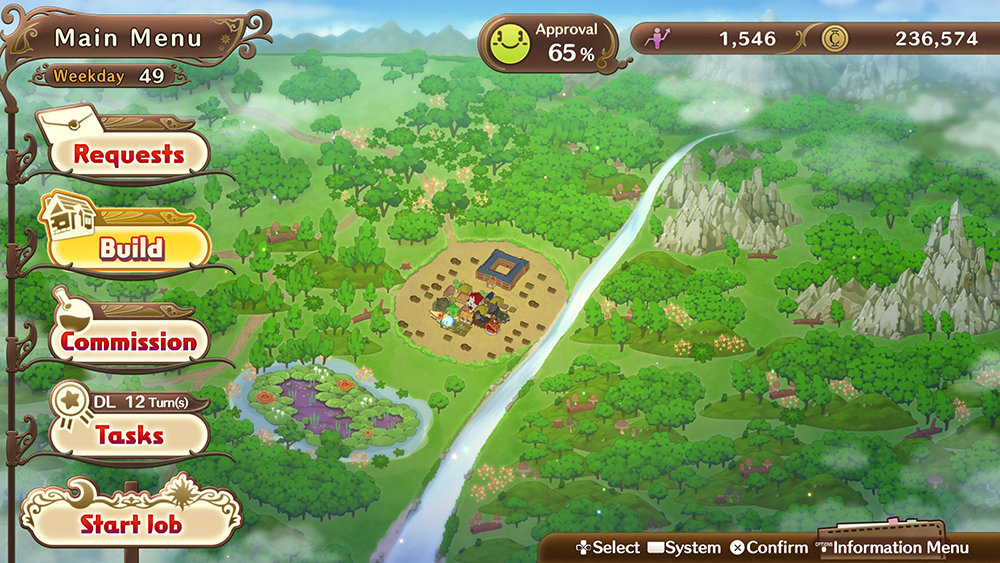 The controls and user interface in this game are all pretty basic. There are quite a few subset menus but for the most part it is pretty straight forward. You don’t even get to practice alchemy in this game… at least not on your own. Sure, you can tell the Alchemist what you want, and make sure they have the materials to do it, but that is as far as your foray into the realm of alchemy goes. The fact that the game is pretty much exclusively menu driven without giving you the ability to manually walk your character at all, is a bit different than what I am used to from an Atelier title. However, this is a spin-off after all and was meant as a way to bring all the prominent characters of the past into a celebration of the series. Taking the game as that, and not a true Atelier title definitely makes it easier to enjoy. 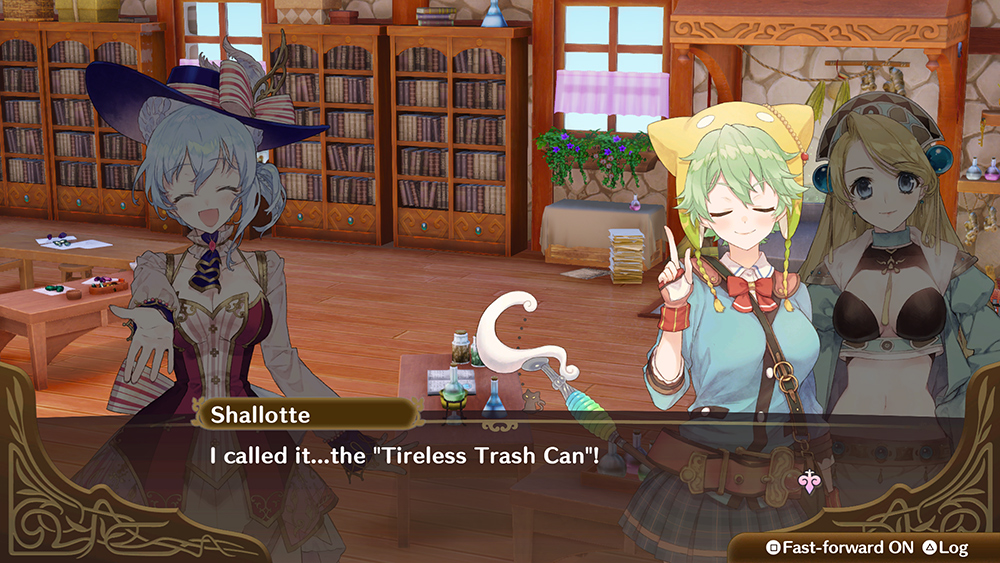 So, should you pick up Nelke & the Legendary Alchemists: Ateliers of the New World? If you are already a fan of the Atelier series, and would love more content for your favourite historical Alchemist and can accept a spin-off that is basically not a standard Atelier game, then you might enjoy this title. If this is going to be your first Atelier game and you intend to judge the series by it, then I will say a resounding no! There is no way this title should be used as an entry point into the proper series. It is a great transition though for people who enjoy city management games and visual novels to get a taste for the Atelier series. If you set aside the expectations of what a modern Atelier title should be and accept the game for what it is, Nelke & the Legendary Alchemists: Ateliers of the New World isn’t actually all that bad like some of the reviewers are saying. Games can have spin-offs and those spin-offs don’t necessarily have to be clones of the main series. Look at Final Fantasy Tactics for example, it’s quite different from the main series game Final Fantasy VII which was also released that year, but its success spawned its own sub-series due to the fact the Developer took a chance and it worked well. Do I see Nelke getting the sequel Gust-Chan hinted at? Maybe, if people are willing to accept this game for what it is rather than what it is not. If you are expecting a tried and true proper Atelier game, then you are likely better off waiting for Atelier Lulua: The Scion of Arland. A title, by the way, that I am really looking forward to. In the meantime, to keep myself gamefully occupied while I wait, I will continue to hunt for a very elusive magical tree while surrounded by all my Alchemist friends. 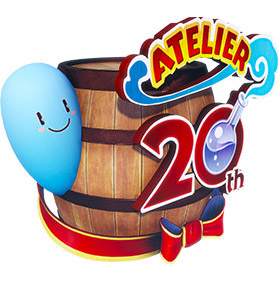