Man, this makes me want to go to an arcade.

Arcade Spirits takes place in an alternate timeline where the video game crash of 1983 simply didn’t happen. I’m sure that many people out there know about the famously horrible E.T. game developed for the Atari and how millions of copies were buried in a landfill (which in 2014 was discovered to be true and not just an urban legend). Well, in Arcade Spirits, instead of giving the E.T. development team only 6 weeks to work on the game before shipping it out, they actually delayed it. Leaving what could have happened (the crash) in theory and making our universe the darkest timeline. Now in the year 20XX, everything is pretty much the same except arcades are still in business and occasionally popping up (and as you’ll later find out, has a pretty active indie scene). 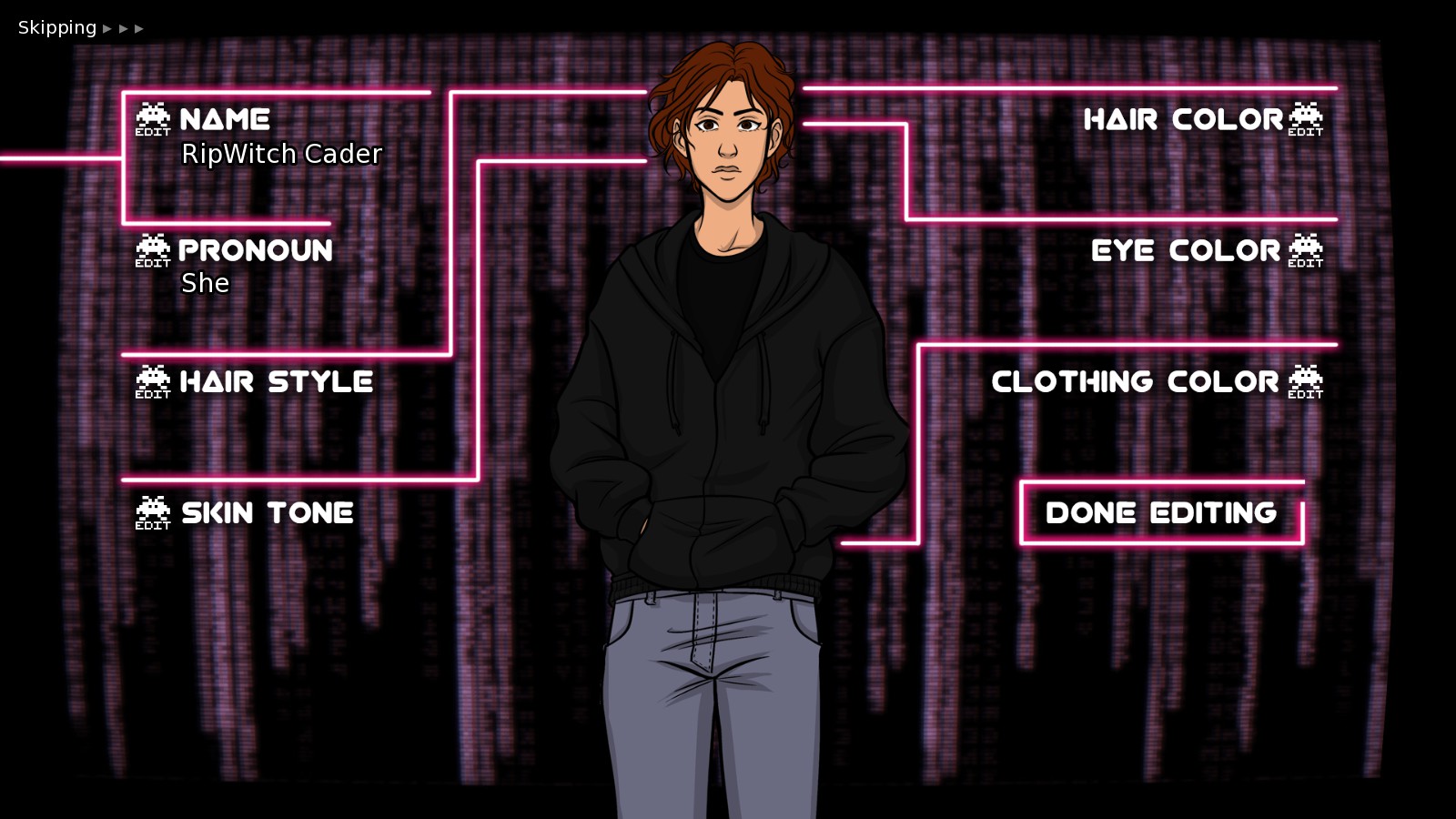 With that out of the way, it’s time to get into the nitty-gritty; bringing you into the universe. Arcade Spirits does feature character customization, but it is sadly limited. You can change the character’s skin tone, hair color, eye color, clothing color, hairstyle (you can choose between three), and the pronoun they’ll go by. I do wish there were more options here, but I understand why, especially considering that it does appear in various scenes. Apart from one specific scene that made the player character look weird, this didn’t really bother me too much. 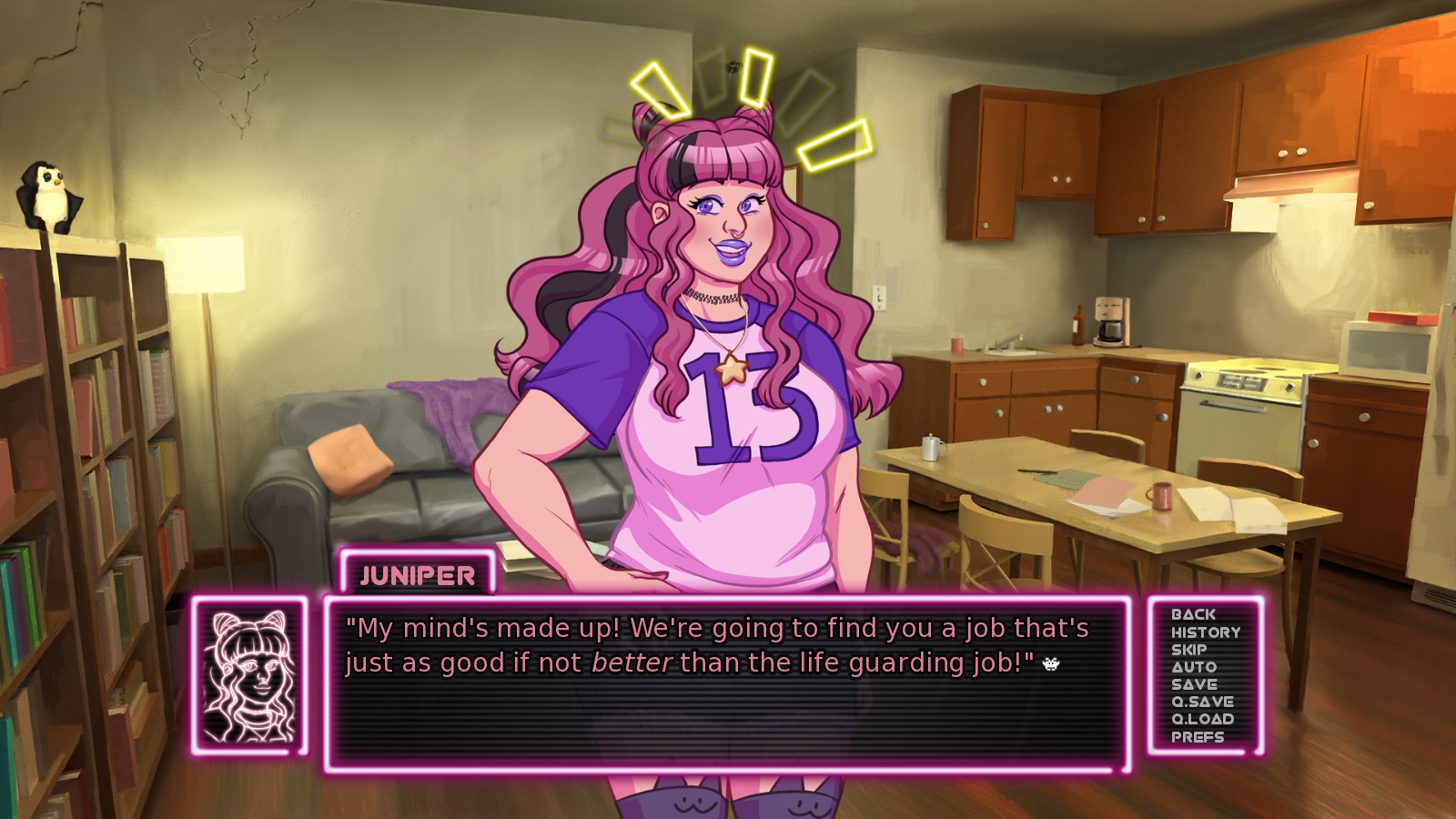 After finishing up your character, it turns out that you’ve had a lot of bad luck in the Arcade Spirits universe. You were just fired from your lifeguard job that you actually liked going to, which couldn’t be said about the other jobs you had and lost. Wanting you to be happy and find your dream job, your roommate Juniper urges you to download IRIS. IRIS turns out to be a life coach app that tasks itself with making you happy, and the first thing on her list is finding you a job that you’ll love. The job that she set you up with turns out to be at a local arcade called Funplex. 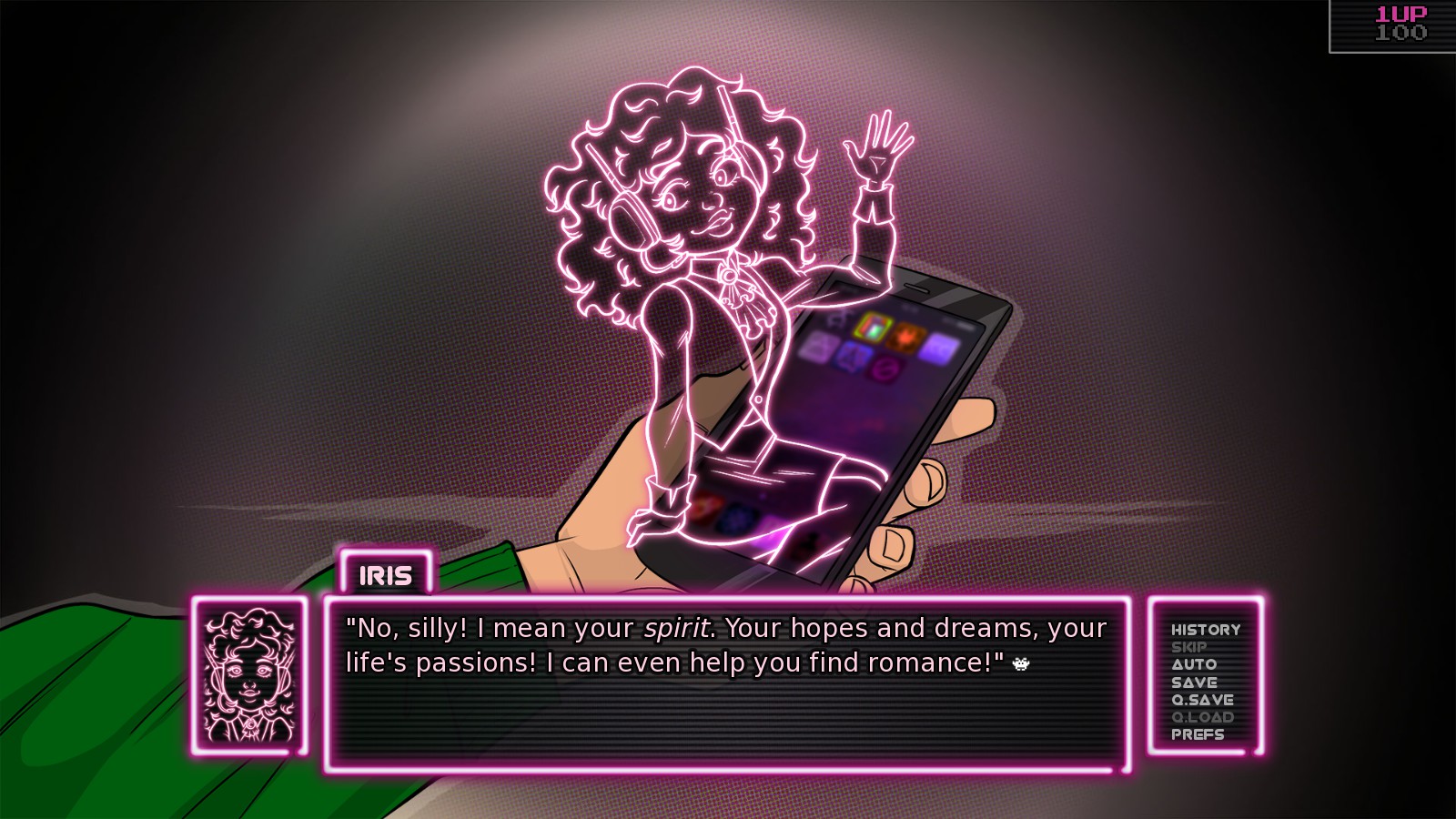 While finding you a job was the first step towards a happier future, it’s not the last. To further help you out in your journey, IRIS needs to know you better. How else will an AI do that other than analysis your interactions with others? To do this, IRIS uses her Identity Identifier System to analyze your responses to certain identity identifiers to figure out your personality. There are five identifiers that any response can be under: Quirky, Steady, Kindly, Gutsy, and Basically. Quirky is more focused on making jokes or being sarcastic, Steady is being honest and logical, Kindly is being compassionate and gentle, Gutsy is being bold and, well gutsy, while Basically is just neutral. Each of these identifiers is represented with a symbol that will appear on possible choices when talking to others. However, if you’re someone that would want at least their first playthrough to be blind, you can hide these symbols. 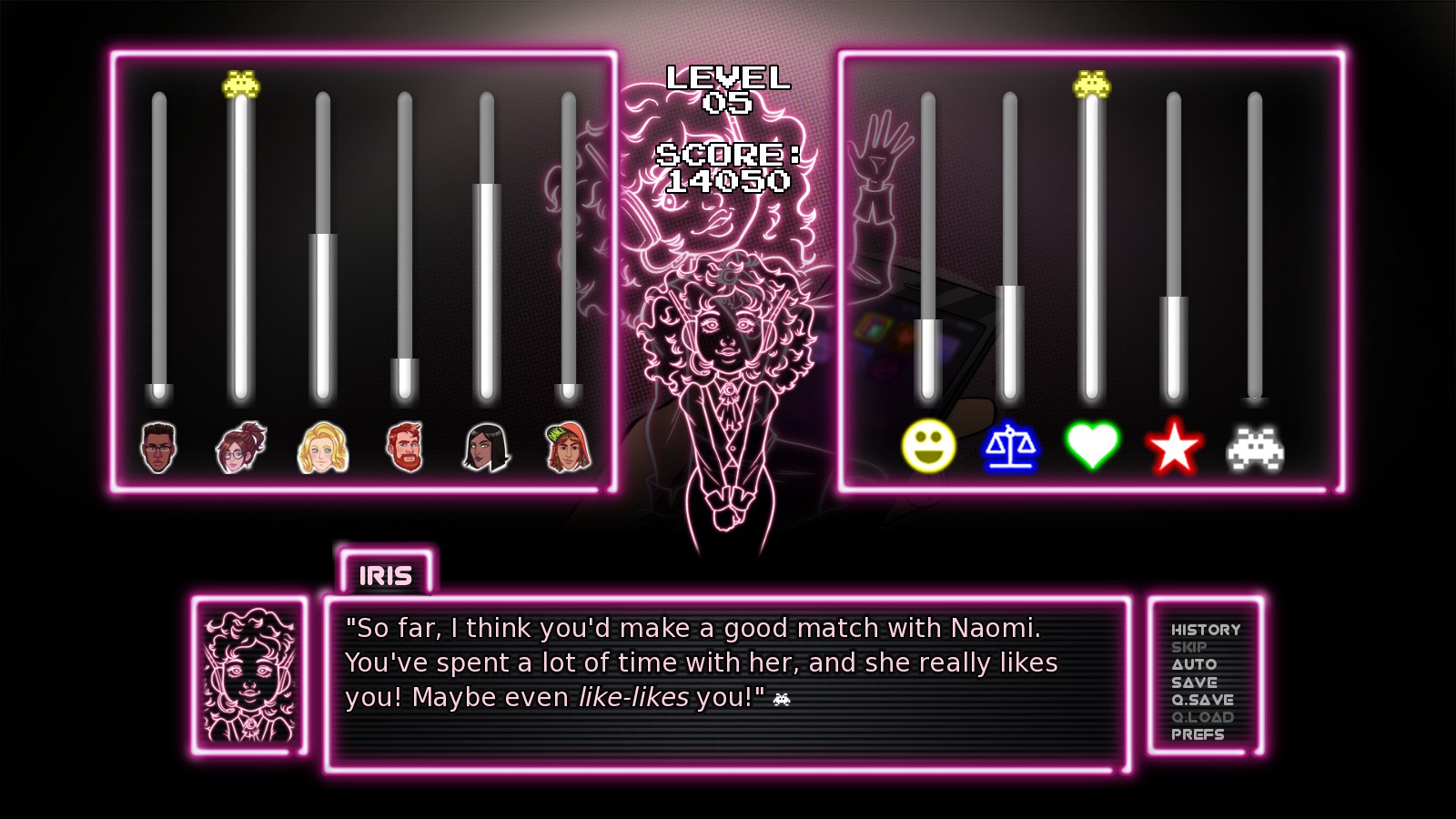 In addition, IRIS also pays attention to your relationship with others. Before you meet your possible love interests, you can decide if you want to romance anyone and if you do, how you want your first impressions to be. Of course, picking the friends-only route will lock you out of romancing anyone. For romancing, you have two choices to pick from: play it cool or be flirty on day one. Both of them are similar, but being flirty on day one gives you an extra flirty choice when you decide your first impressions on a character and picking that will get you some extra dialogue down the road. Either way, IRIS will also keep track of how much you interact and hang out with each datable character. 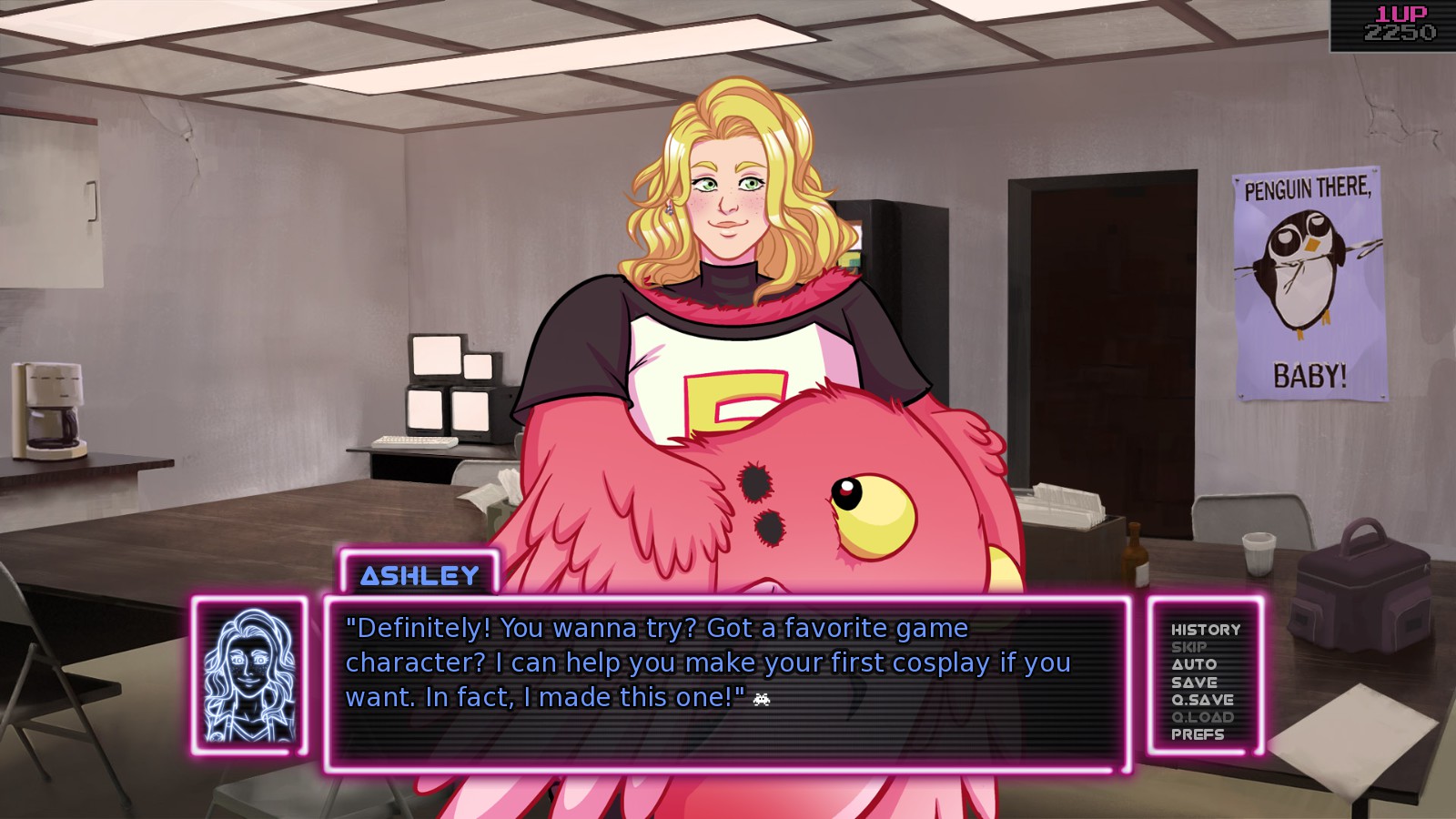 While Arcade Spirits is focused on the events surrounding your employment at Funplex and trying to make it a permanent job, it’s also focused on the various characters there. Apart from the lovely owner Francine, this makes up our main cast and possible romances. There’s Naomi, the shy technician who’s a nerd for everything arcade; Ashley, the upbeat cosplayer; Queenbee, a fierce eSports player for Fist of Discomfort; Percy, the Moopy world score chaser; Teo, the flirty dancer and leader of the local Spotlight Stage community; and finally Gavin, the sharp manager that is strictly business. With these six (or should I say seven) possible romances, there’s bound to be someone who appeals to you (for me it was Naomi). 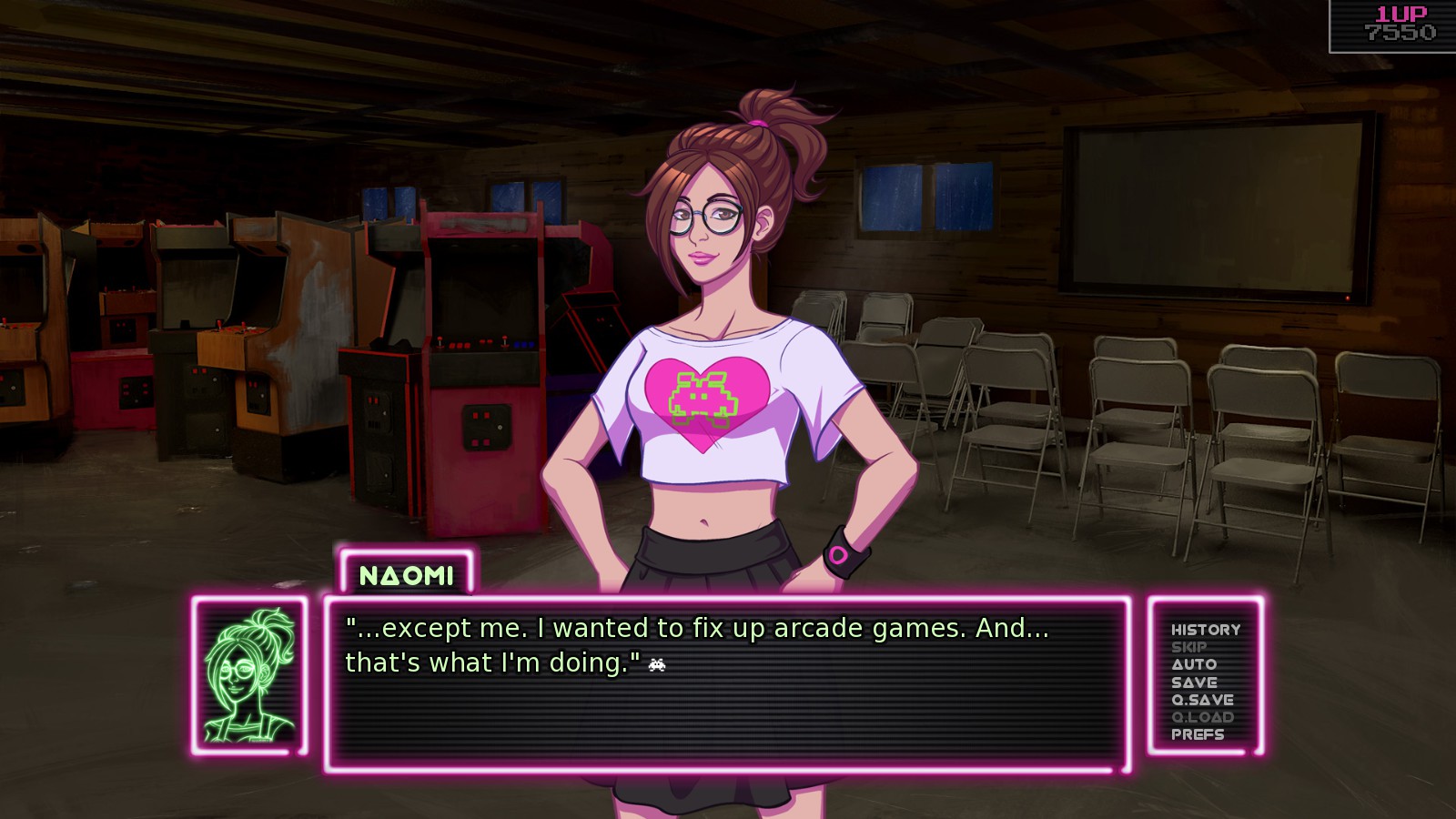 While I don’t want to spoil anything, the writing here is well done. Yeah, some of the jokes just don’t land and some of the gaming references can be a bit annoying, but I didn’t find myself bored or just wanting a scene to end already. I also liked how the dating aspect isn’t so much going for someone, but getting to know them by hanging out. Every character is interesting one way or another, even the characters that you might not have liked at first.

Just be warned that if you’re intending to use the auto-forward feature, mess with the speed after saving. Rolling back to see the previous text isn’t available until you finish your first playthrough or manage to figure out the DIP switch code on the Prize menu. 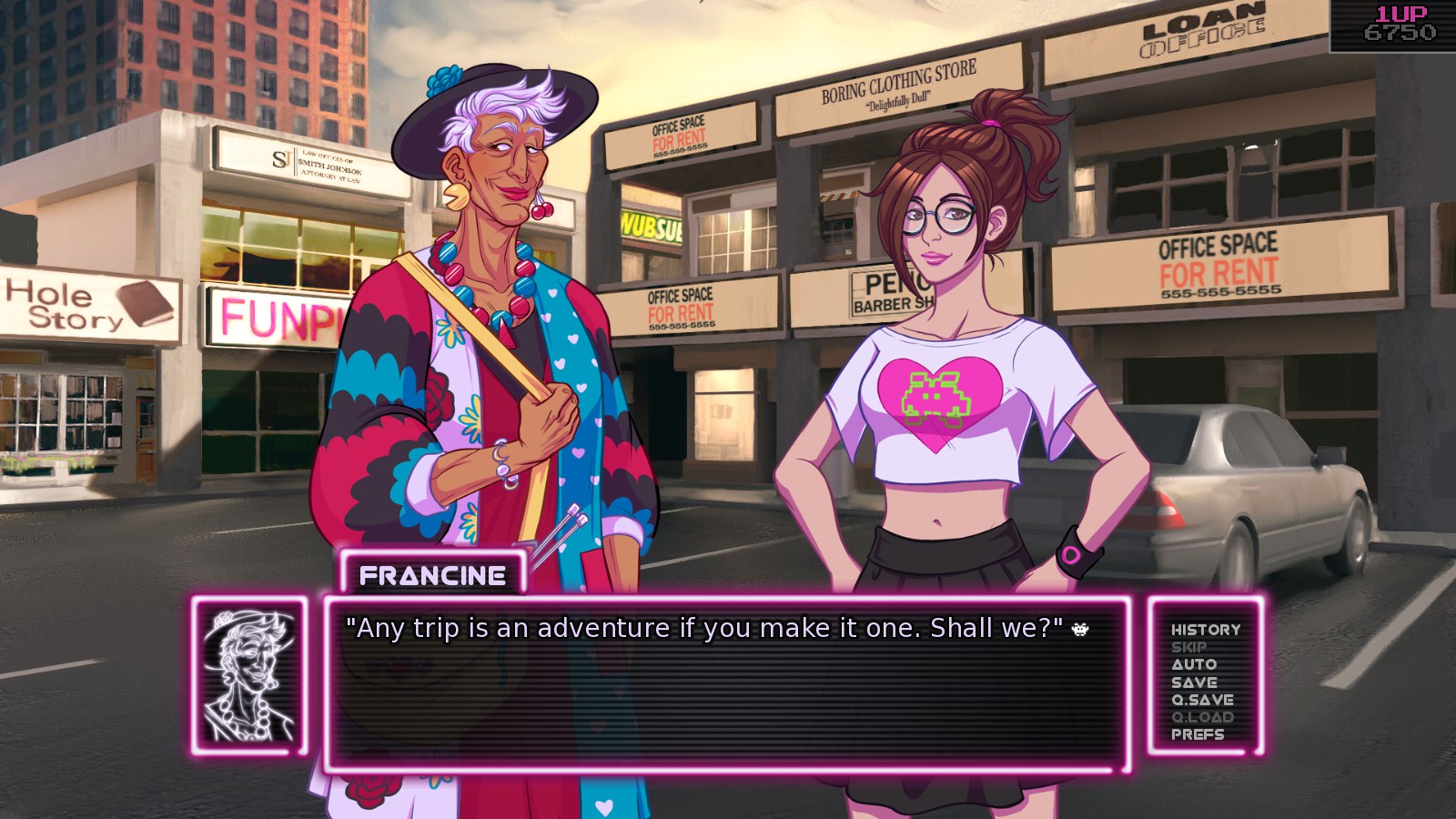 While I did play the demo many months ago and was already looking forward to Arcade Spirits, I ended up loving it more than I expected. I just couldn’t help going back and romancing everyone, as well do the friendships-only route, and changing up my character’s personality to see how the ending differed and the dialogue that I initially missed. Of course, not all the jokes or references will connect and the art style can be inconsistent in some places, but the great voice acting, nice retro style music, beautiful art style, and storyline brings it to the top. Definitely think about picking up Arcade Spirits especially if you’re looking for a visual novel game and don’t mind that the dating sim aspect is focused on much or how the player character will look.