ISLANDERS is made by GrizzlyGames, the folks behind the sweet procedurally generated SUPERFLIGHT. SUPERFLIGHT was about gliding through surrealist landscapes, and the color palette mixed with random shapes made it a moody and appealing experience. Now, what if instead of falling from mountain to mountain, you had to build civilizations from island to island? ISLANDERS sports a soothing low-poly art style, with idyllic islands of different biomes that you can explore at your leisure without the pressure of a timer. It’s casual and relaxed as you assemble cute little cities.

From GrizzlyGames, I don’t expect a complex simulation: they focus on minimalistic systems. There are plenty of other management games and city builders for that, as this genre is currently blooming with all sorts of experiences. ISLANDERS is on the contemplative end of the spectrum, without resources to carefully manage. And yet, it has very involving systems. 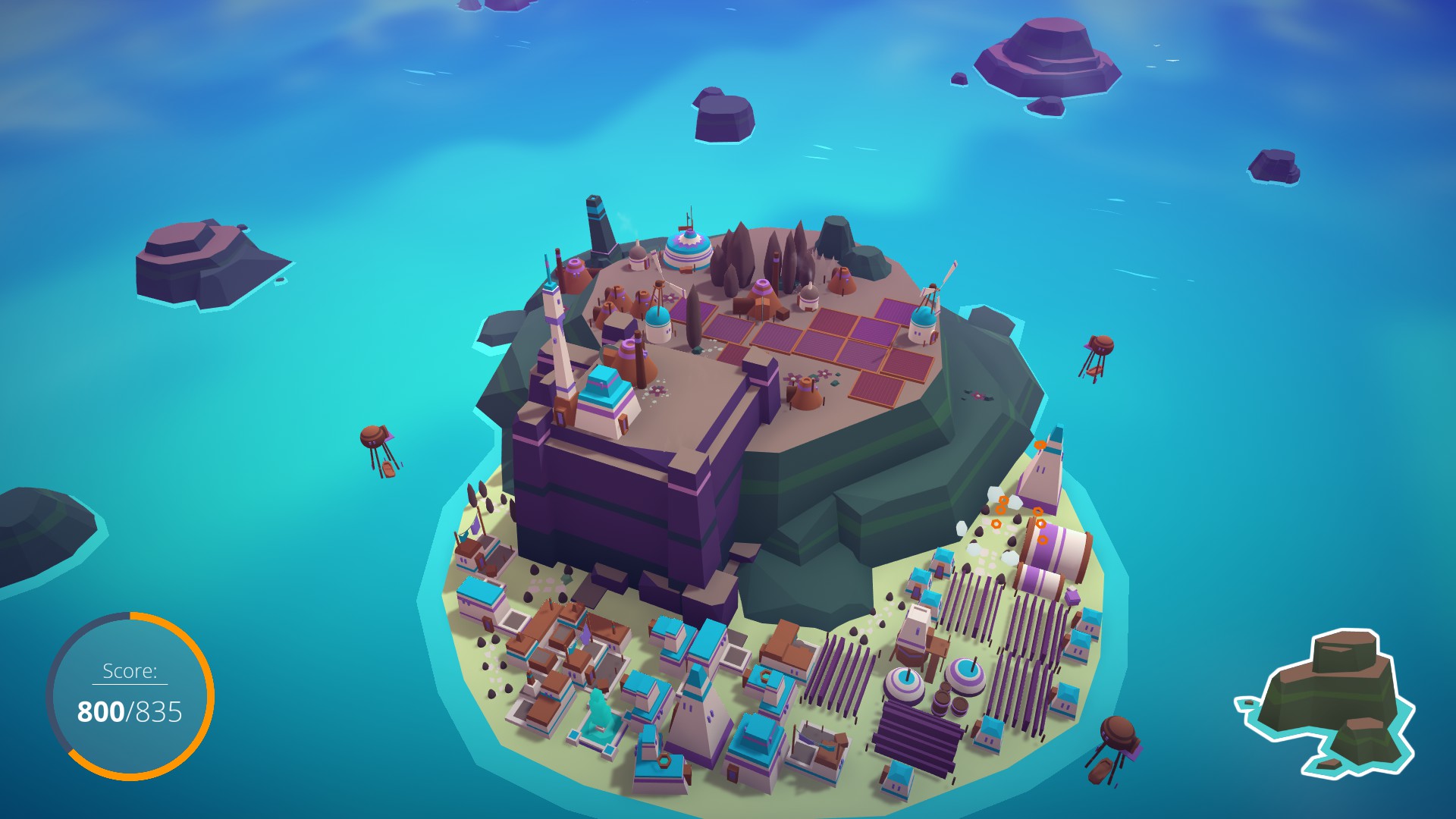 As is often the case in city builders, each building has a specific sphere of influence. Except that here, it’s not about providing services after you built it, but rather it’s about being in range of specific constructions right when you place your new factory or house. And trying not to be in range of building with a negative influence. I might have lost you here, so I will give you some concrete examples: The lumberjack wants to be near a sawmill and trees, but it does not want to be near another lumberjack. The right way to build would be to position lumberjacks around your forest, without them being in range of each other, and then dropping a sawmill right in the middle. The sawmill will get lots of points from being in range of all the lumberjacks. Now that you have tallied your points, your lumberjacks aren’t going to get out of their little huts to cut down trees: if you build on top of the trees from then on, it makes no difference. It’s not about a well-functioning society with a supply chain, it’s about playing Scrabble or Tetris with your buildings and scoring more or fewer points according to what’s in their vicinity on the very moment that you drop them. A mansion will give you extra points for being near some sort of town hall, a mansion will make you lose points if you place it next to a circus. According to the space available, it might be quite difficult to optimize good placements! All of this makes you handle the game like a puzzle game rather than the usual city builder. 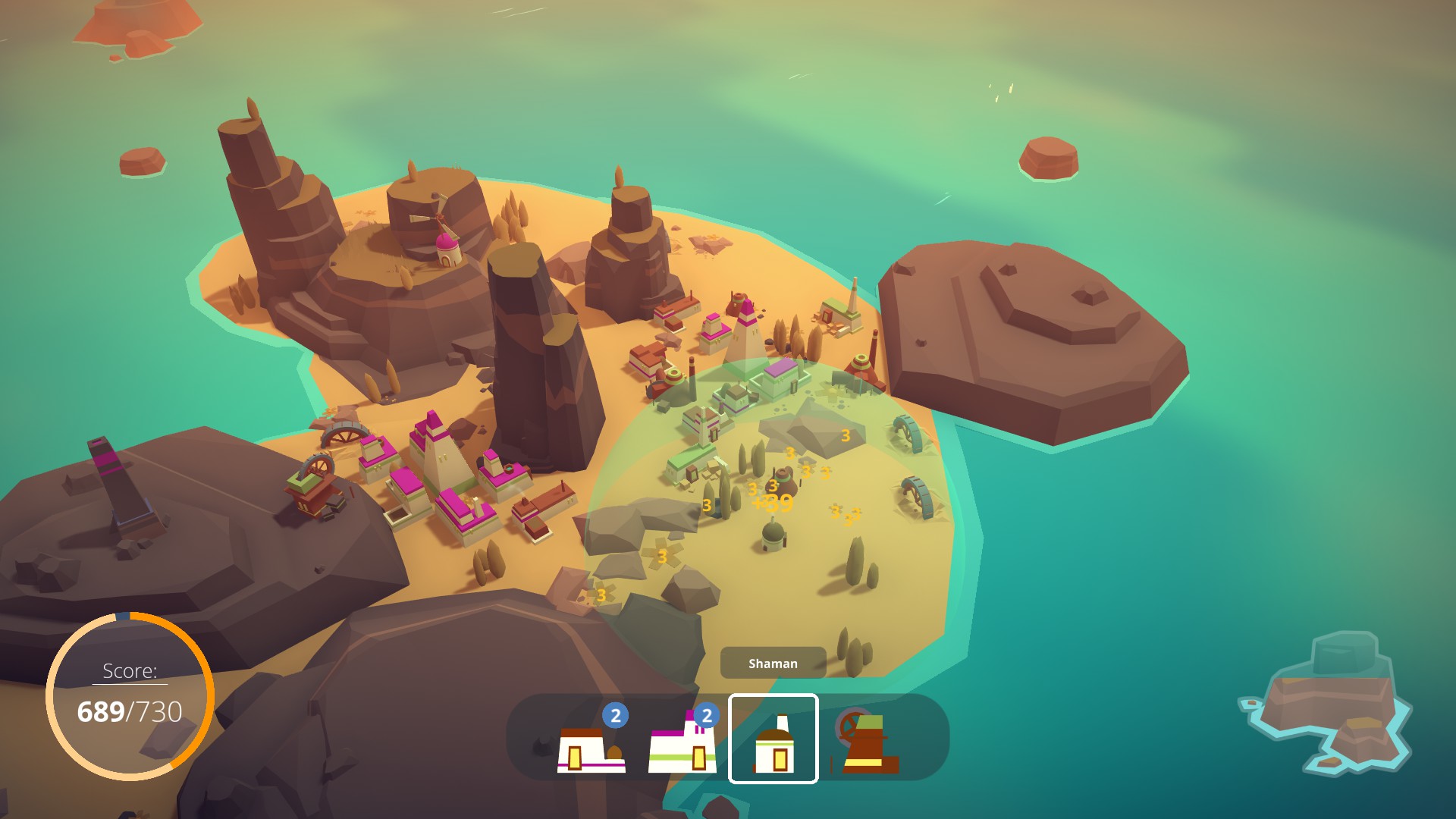 Garnering points gives you the choice between two building packs, as you gradually unlock more industry or prestige constructions. If you score sufficient points with the hand you were dealt, you can buy the next until you can finally move to a bigger island, with more possibilities available right from the start. If you get yourself in a corner and can’t score enough to unlock anything new: game over, back to square one on a fresh new island. It works sort of like a rogue-lite, even though there does not seem to be any end in sight (besides achievements that reward your progress); consider it more like SUPERFLIGHT, an infinite game of doing the same thing over and over. 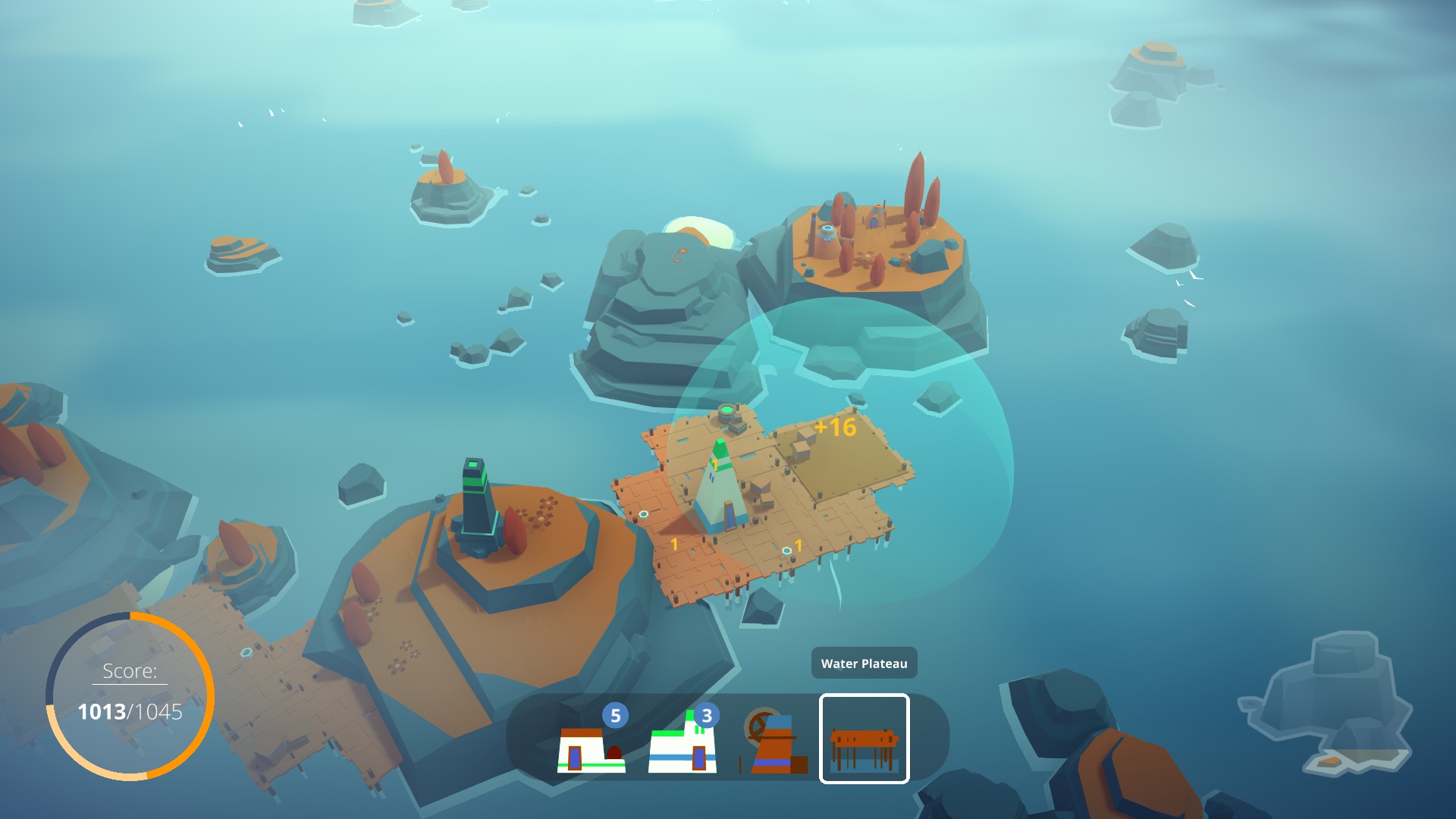 ISLANDERS is repetitive. There is no going around that. Each island can be completed quickly. Although the next one might look different and the procedural generation will force you to plan your architecture differently, it quickly feels like you are running in circles and following the same steps every time. The only difficulty comes from learning the interactions, so that you can plan ahead to score better and not waste any point. Being a quick game is a curse and a blessing. A blessing because you can enjoy short sessions; a curse because you soon feel like you got everything out of the game; and also, everything is so fast because there are no little builders and peons making your world feel like a beehive. It’s pretty, but a little bit empty. 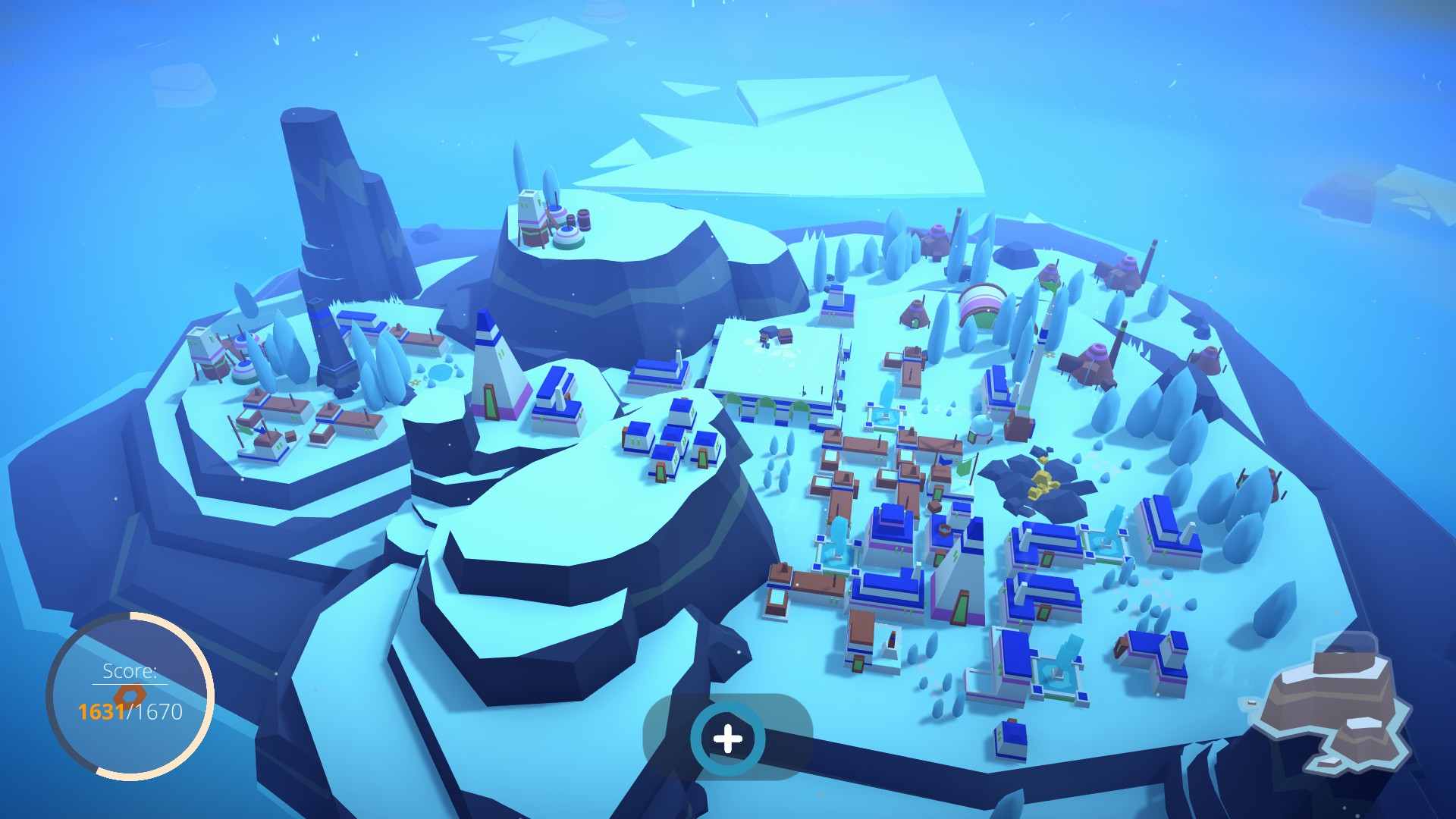 Where are all the islanders?

There is something missing. Maybe different tribes with their own architecture and industry, maybe each island could be a specific biome with its unique resources, maybe there could be fantasy industries, and most importantly maybe a busier and more involved world to behold. Perhaps the area of influence mechanism should not have been the rule for each placement, and there could have been other mechanisms for specific industries. I wish that this game could have been elevated from being an infinite simplistic puzzle game. I am not even sure whether it can be classified as relaxing: focusing on numbers is not sweet; moreover, even though the game is not time-sensitive, there is little point in sitting back and watching your colony live its busy life, as there is not a single soul in sight. An additional gripe in my list is that it’s not possible to zoom in and out or angle the camera in a unique way for beautiful screenshots. 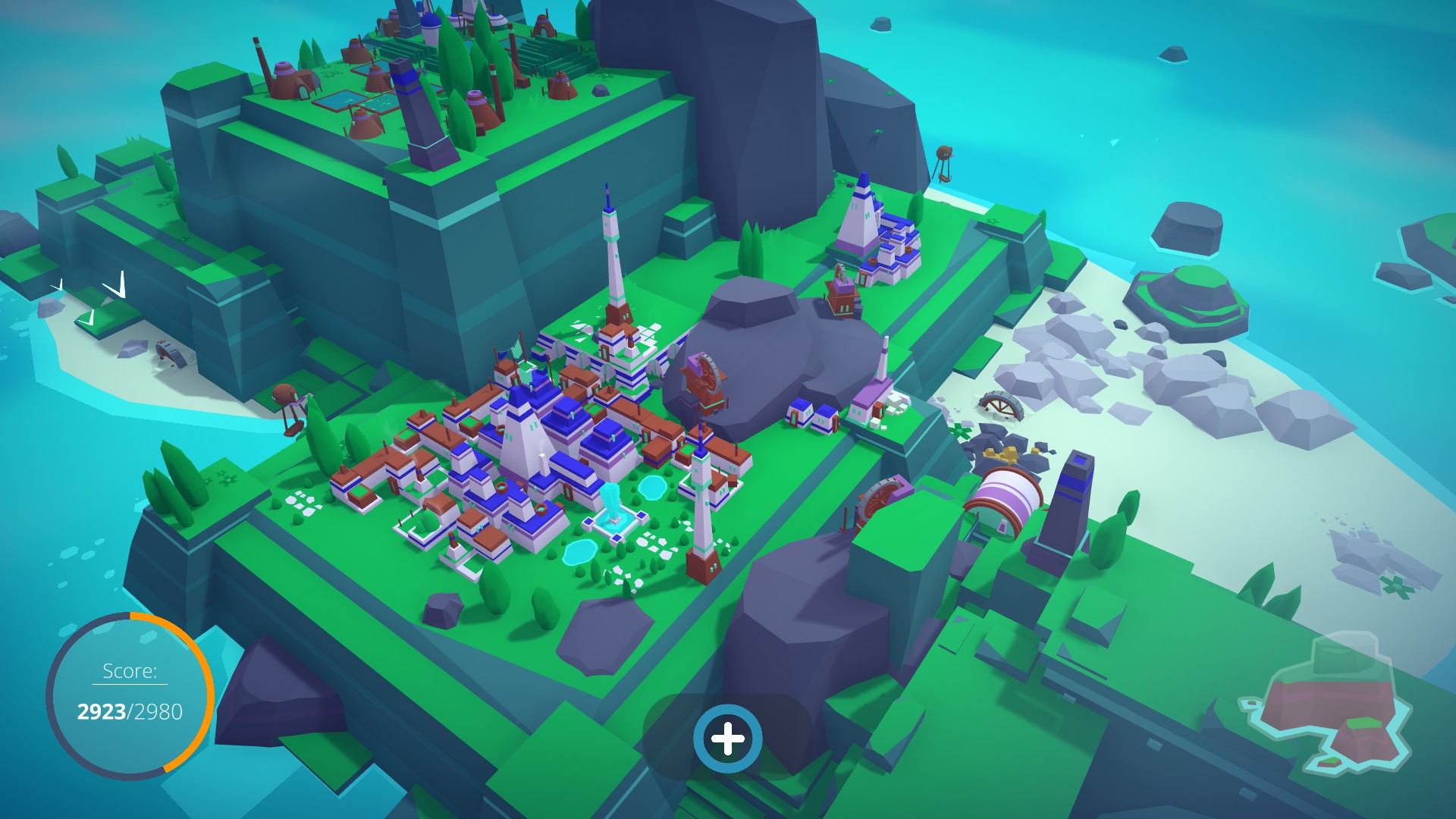 ISLANDERS is perfect for quick sessions: get the keys to a new island, and casually grow a colony by satisfying the needs of each new building. Basically, this is an infinite light puzzle game, with pretty sights to enjoy as your empty parcel of land becomes a full-fledged city. It’s perfect for those who do not want to launch an overcomplicated city builder that requires hours upon hours of involvement in order to develop a sizeable civilization. Sadly, there is no artificial life to sit back and enjoy watching, and the repetitive placement of buildings in a familiar order eventually feels empty. Nonetheless, I feel happy just by looking at screenshots of this game. Since ISLANDERS is a very cheap game, I guess that you can certainly get your money’s worth.