REVIEW: AWAY: Journey to the Unexpected
Add comment
Share:TwitterFacebookRedditPinterestWhatsAppEmail

REVIEW: AWAY: Journey to the Unexpected

Don’t judge a book by its cover…

I think it’s pretty safe to say that AWAY had a lot of people excited when it was first announced. Not only it sounded and looked great, but it actually seemed like it would be a fun time. Furthermore, it’s not every day that you get an anime inspired first-person roguelite. Still, fast forward a few months until the game’s release, and the game receives pretty much universal negative impressions. But is there any actual foundation to all of these? Well, sadly, for the most part, there is. 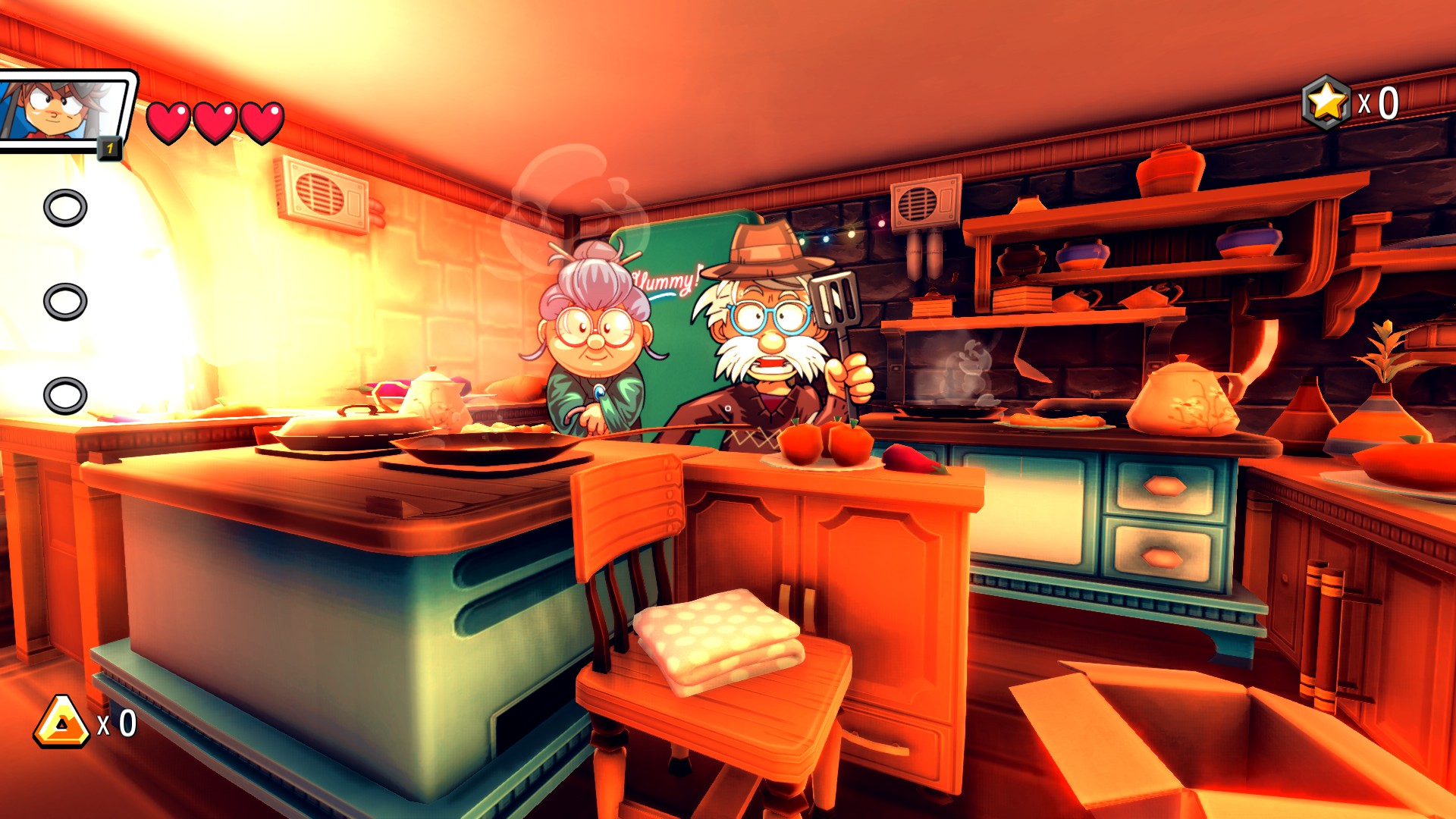 The game was developed by only two people, one of which had previously released The Next Penelope, and another who worked on Monster Boy and the Cursed Kingdom, which I’m sure a lot of people will draw parallels between the art style of both this game and AWAY. I’ve decided to mention the team size because some people might look at the game differently after knowing that there were only two people after reading my thoughts about the game. Still, there are numerous examples of excellent games with small teams such as this, so I still don’t think that could be an excuse for what AWAY turned out to be.

For starters, my first impression of the game wasn’t a positive one. For some reason, the graphics settings menu is displayed in a mixture of English, Chinese, and a tiny bit of Spanish. The game also does that thing where it defaults to your Windows language setting, but fortunately, that is easily overridden. However, one thing that really always bothers me is the lack of key binding options. On top of that, you can only change mouse sensitivity between a few fixed values, which doesn’t help the fact that mouse movement in the game feels really weird. I’m not sure if it’s mouse acceleration or mouse smoothing, but something definitely feels amiss as far as using a mouse goes. 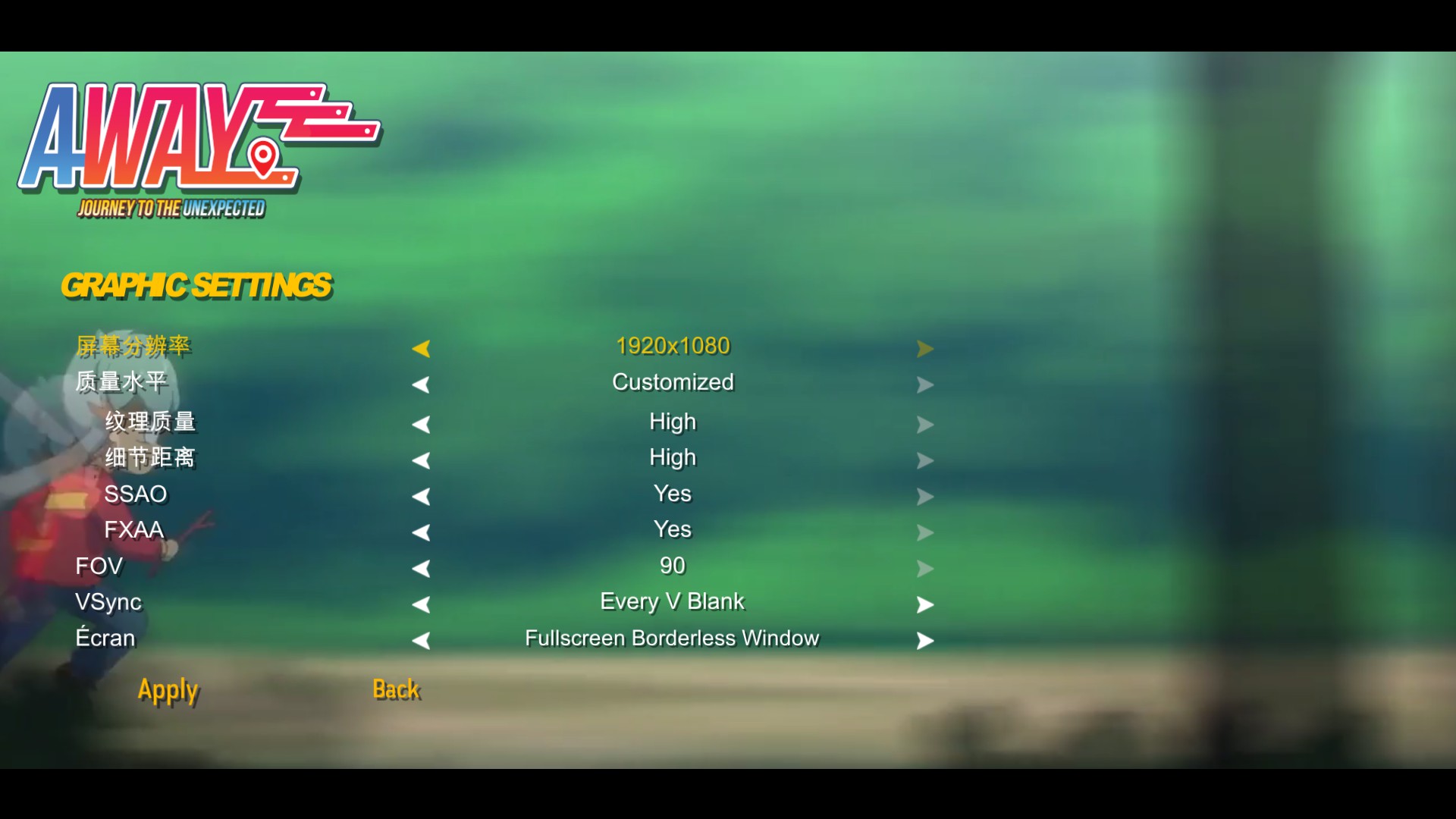 Nevertheless, I’m sure people are not here to read only about the game’s technical problems, so let’s get down to the nitty-gritty. AWAY is a first-person action game, that despite having a few moments of shooting is not a shooter, but more of a hack and slash, in the sense that melee combat is extremely simplistic.

You play as a kid who sets out to take the fight to an evil corporation that is apparently mining some weird fuel source all across the land, while also looking to find his missing parents that have allegedly gone on a secret mission. Soon enough you realize that not everything is what it seems and that there is another force in play, one which you’ll have to face. The story isn’t really the focus here, as there are very few dialogue sections, and the from the few that do exist, the most part have a role to play as far as game progression goes. 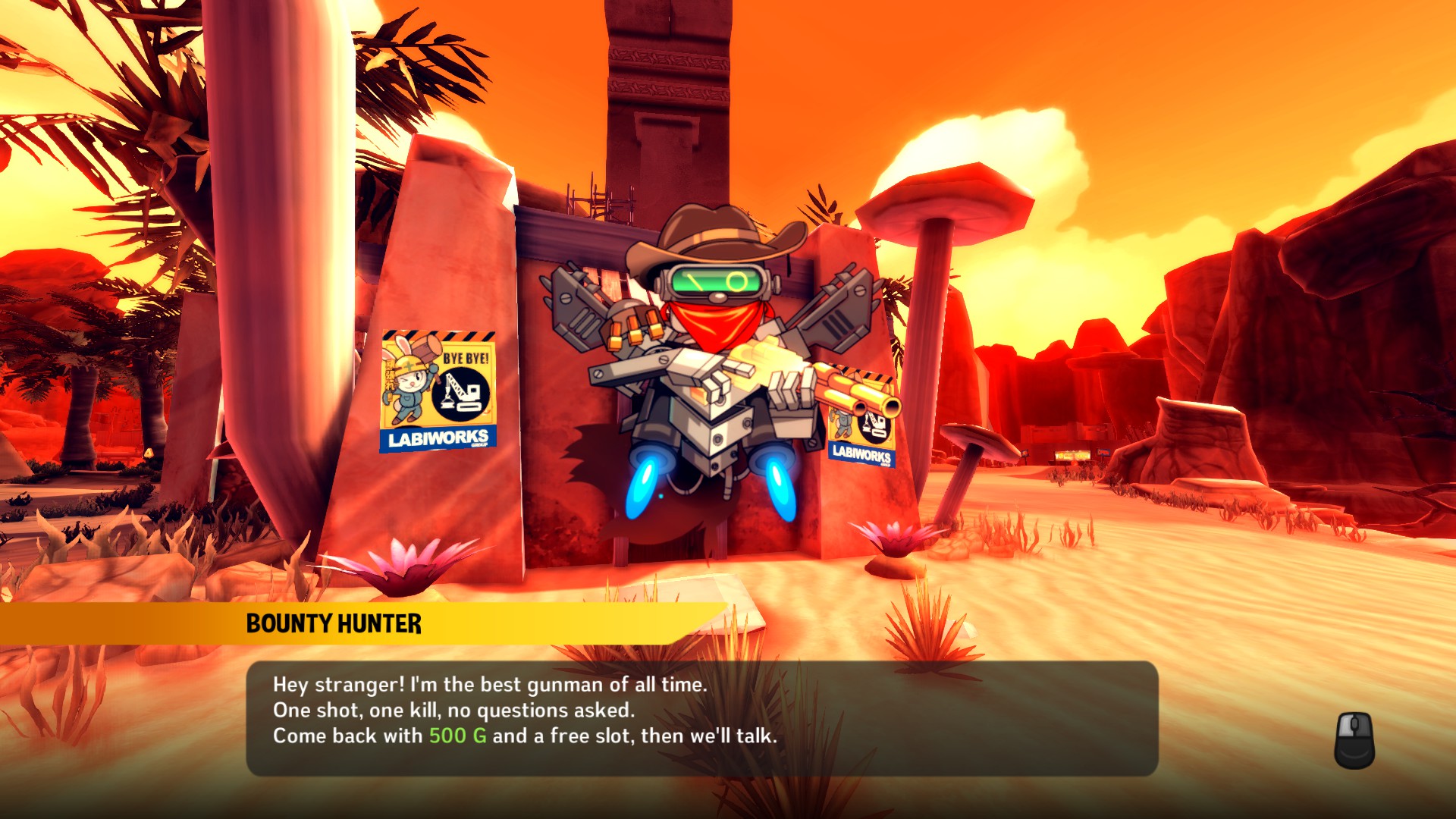 If you were expecting something crazy as far as level variety goes, well, it’s more of the same, which isn’t really a bad thing. There’s a forest area, a desert, an arctic zone, a tropical island, and a space castle. In each of these areas, you either have to make your way through enemies and activate levers to open the door to the boss level, or, once inside the boss level, you have to find the boss room key and open it. There’s really not much else to it.

Now, one of the big issues that this game has is the fact that areas are locked until you’ve acquired a certain number of stars. These stars can only be obtained by getting new people to join your party, which relies on persuading them via dialogue. If you fail to get them to tag along with you, you can only try again on your next run. It seems like a complete waste of time, and it only makes the entire process of repeating the same levels much more tedious. 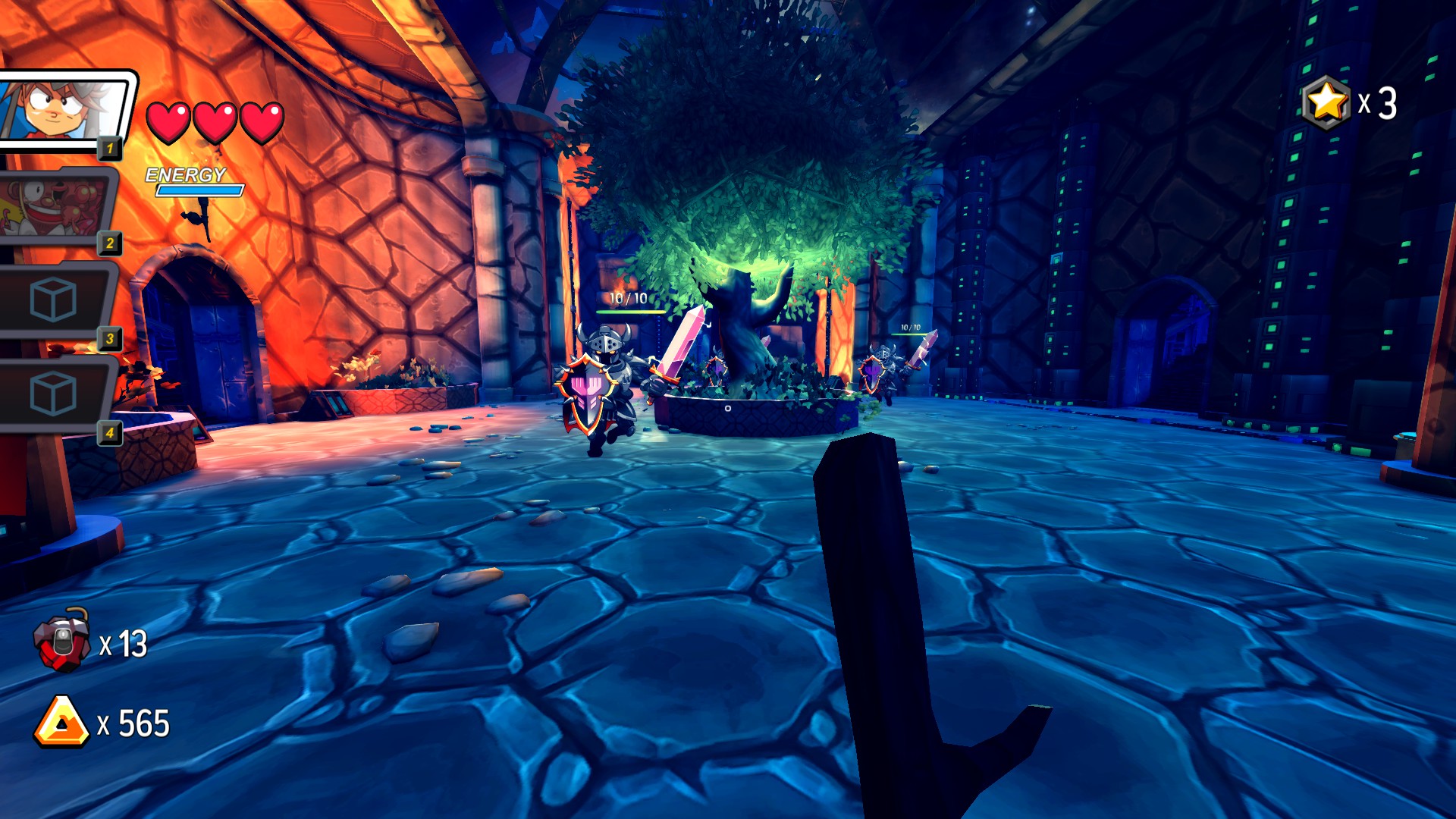 Simply put, combat is overly simplistic. It’s extremely easy to avoid getting hit, to the point where the game doesn’t provide any challenge at all. The fact that spamming the attack button is all you can do, other than throwing some fireworks, also does not help in making the combat more engaging. There is a block ability and a charged attack, but I honestly never really used them because running back and forth and spamming the attack button proved to be much more effective.

On the other hand, I find the party system to be somewhat unique. Instead of having all party members active at once fighting alongside you, instead, as the game describes them, they act like powerups, since you can instantly switch between characters in order to use their unique attacks. However, teammates attacks use energy, which can only be replenished by buying burgers at the shop located on each of the areas. While each character is unique in their own peculiar way, like the robot with a rocket launcher that assumes you to be a superior type of robot, and a talking ice cream that is slowly melting away, they never truly achieve their true potential. This is simply due to the fact that the game is extremely easy to beat even without teammates, and the only reason I found to use some of them was to just defeat bosses quicker. 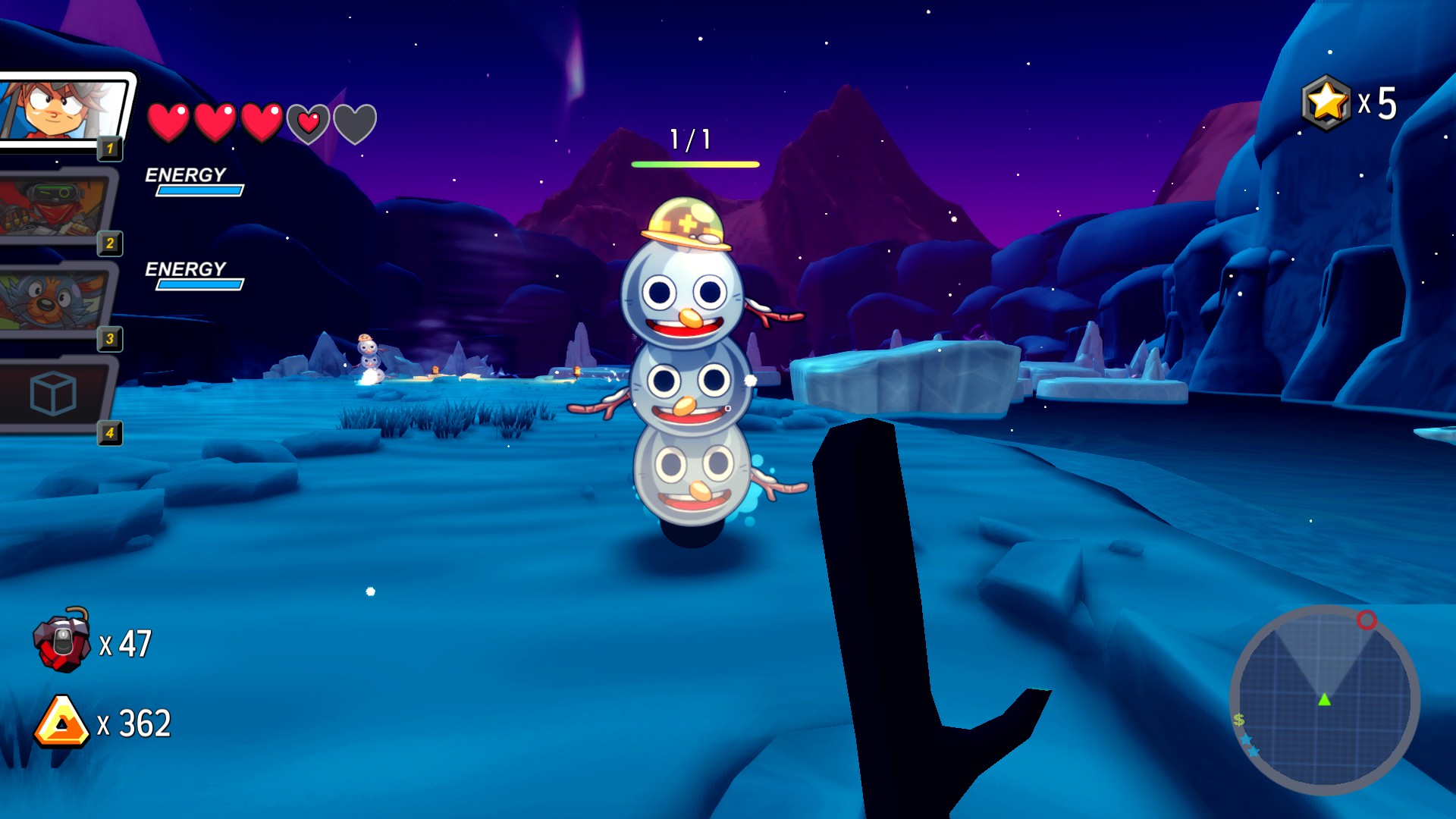 Also, I have no idea why there is a sprint button, since there’s no advantage to walking, nor there is a stamina bar. It’s just an annoyance having to press the sprint key at all times to move faster. It would’ve made much more sense to make the sprint speed the default movement speed.

I beat the game in little more than three hours, and I can safely say that it has no replayability. So, when taking that into account, and all the issues that I’ve mentioned previously, I honestly don’t think that AWAY is worth its price. I wouldn’t call it a bad game, but I don’t think I’d even call it mediocre, as it really pushes the limits. No matter if you like the absolutely stellar art style and soundtrack, or if you really want to give it a shot, I’d highly recommend you wait for a heavy discount before picking it up.