REVIEW: The spy who shot me
Add comment
Share:TwitterFacebookRedditPinterestWhatsAppEmail

REVIEW: The spy who shot me

Agent 7 is back in GoofyEye.

The Spy Who Shot Me features agent 7 in the secret service of Her Majesty the Queen of England, an obvious spoof on 007. A couple of nukes were stolen from the intelligence agency MI-69, tasking our elite spy to retrieve them across the globe in this first-person shooter.

In Her Majesty’s Unruly Service

First and foremost, the comedy is rather well done. Visiting the MI-69 headquarters is a treat: the game clearly expects the player to shoot everything on sight, and even NPCs seem to be aware of it. Their hat flies off, their pants fall down as you shoot them, and in turn they throw humorous quips at you. Agent 7 entertains us with the occasional one-liner, and the retro James Bond atmosphere turned parody got a few smiles out of me. 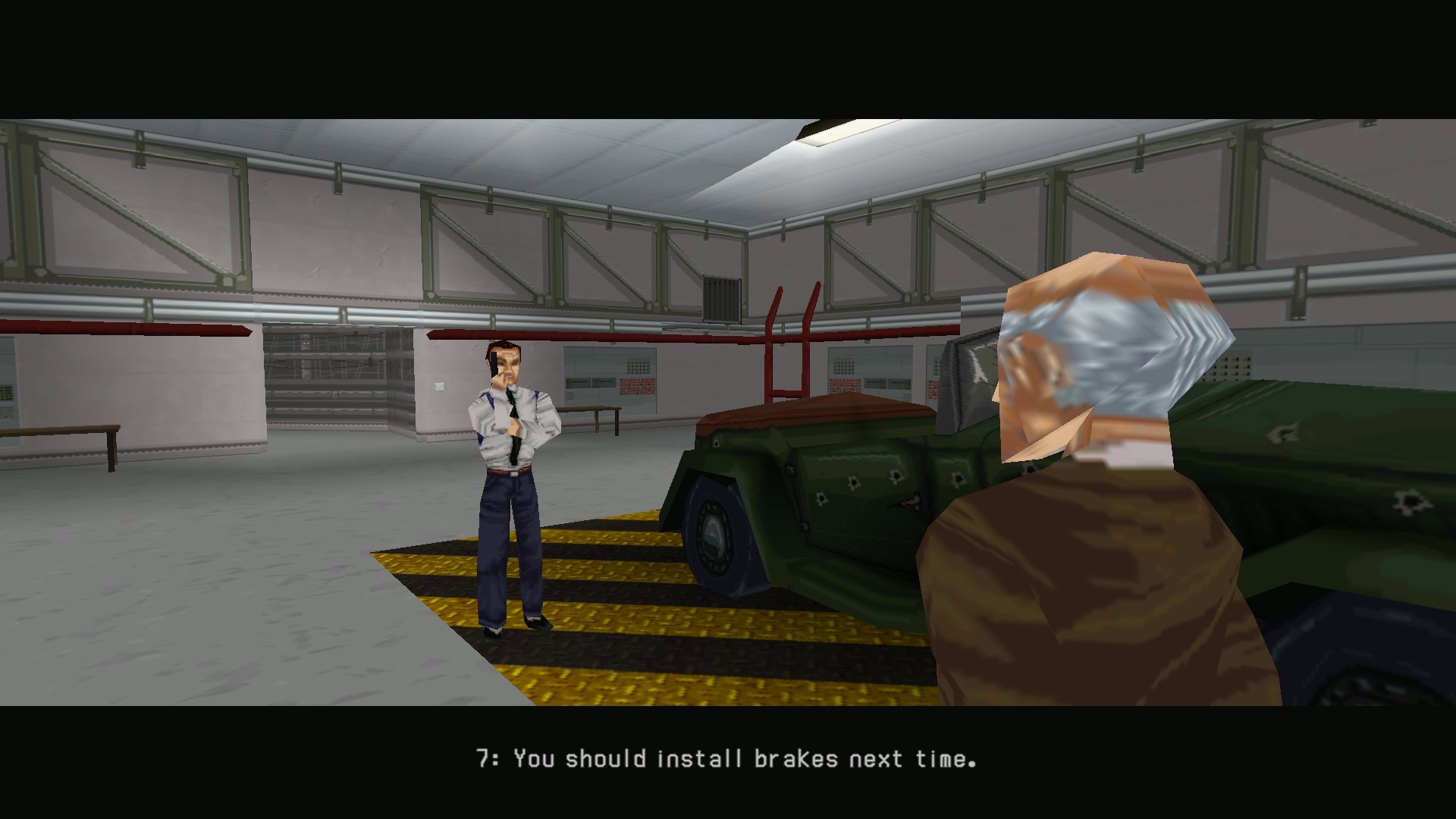 Sadly, while the James Bond parody is spot-on, this is clearly not GoldenEye, nor even a competent FPS. The game was made with unity, but its shooting mechanics are as bad as any FPS creator game. If you were not familiar with that era of awful games made with a software possessed by the evil spirit of a radioactive turd, let’s just say that it’s poorly animated, with stiff AI and clunky movements. The second mission unlocks the ability to jump, and it took me many tries in order to simply climb on a crate right next to me. 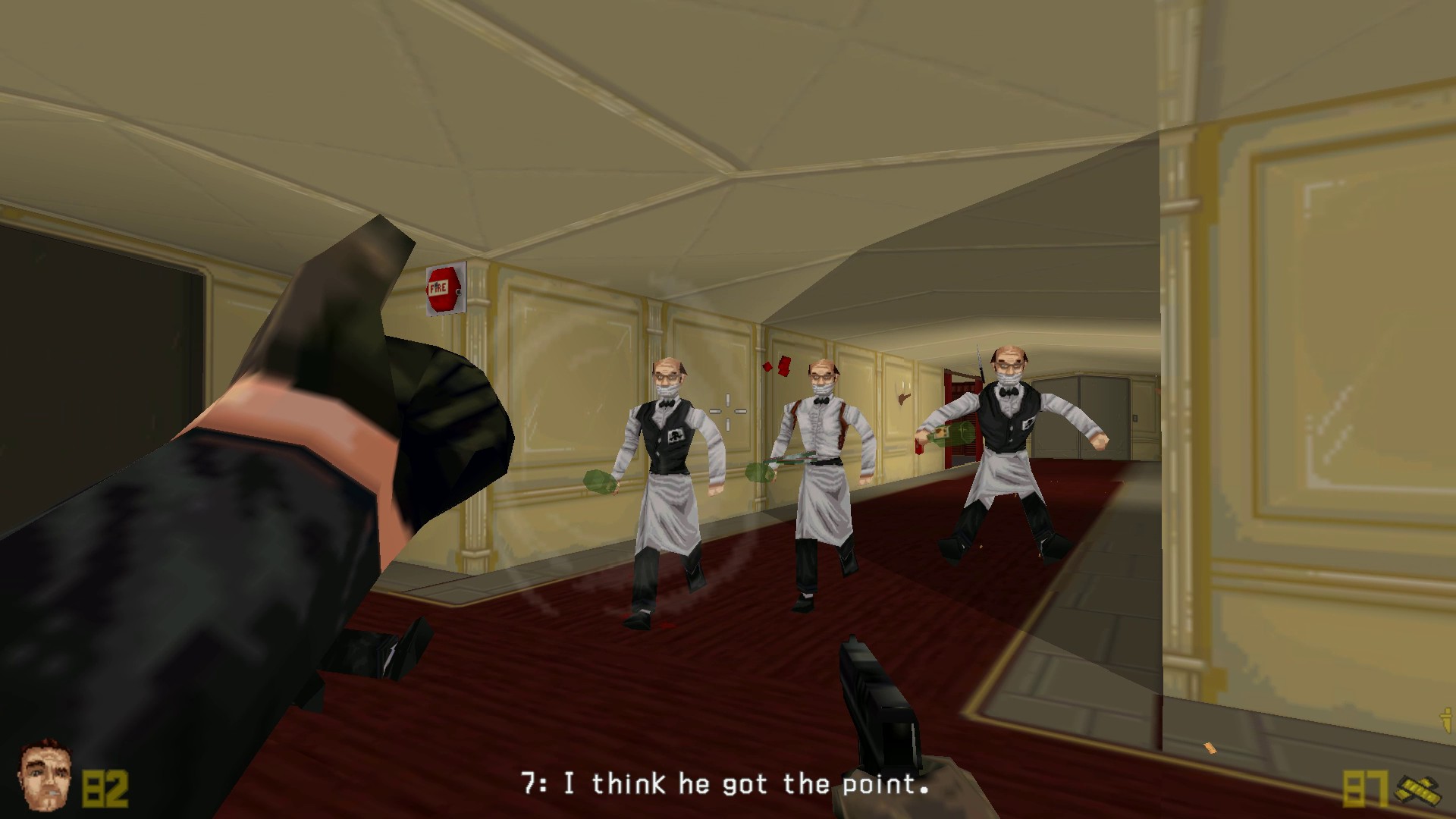 If the movements were not dreadful enough, know that you can’t even rebind the keys. And even though the game displays Q for melee, that key is for throwing grenades. Melee is on E. F is for throwing knives, and RMB is to use a weapon’s alt function (silencer on the pistol). Shift to run, Ctrl to crouch – cool detail, the character’s head on the HUD reacts accordingly. At least the game can be pretty fast if you rush through the rooms all guns blazing, and you don’t have to waste any time reloading! 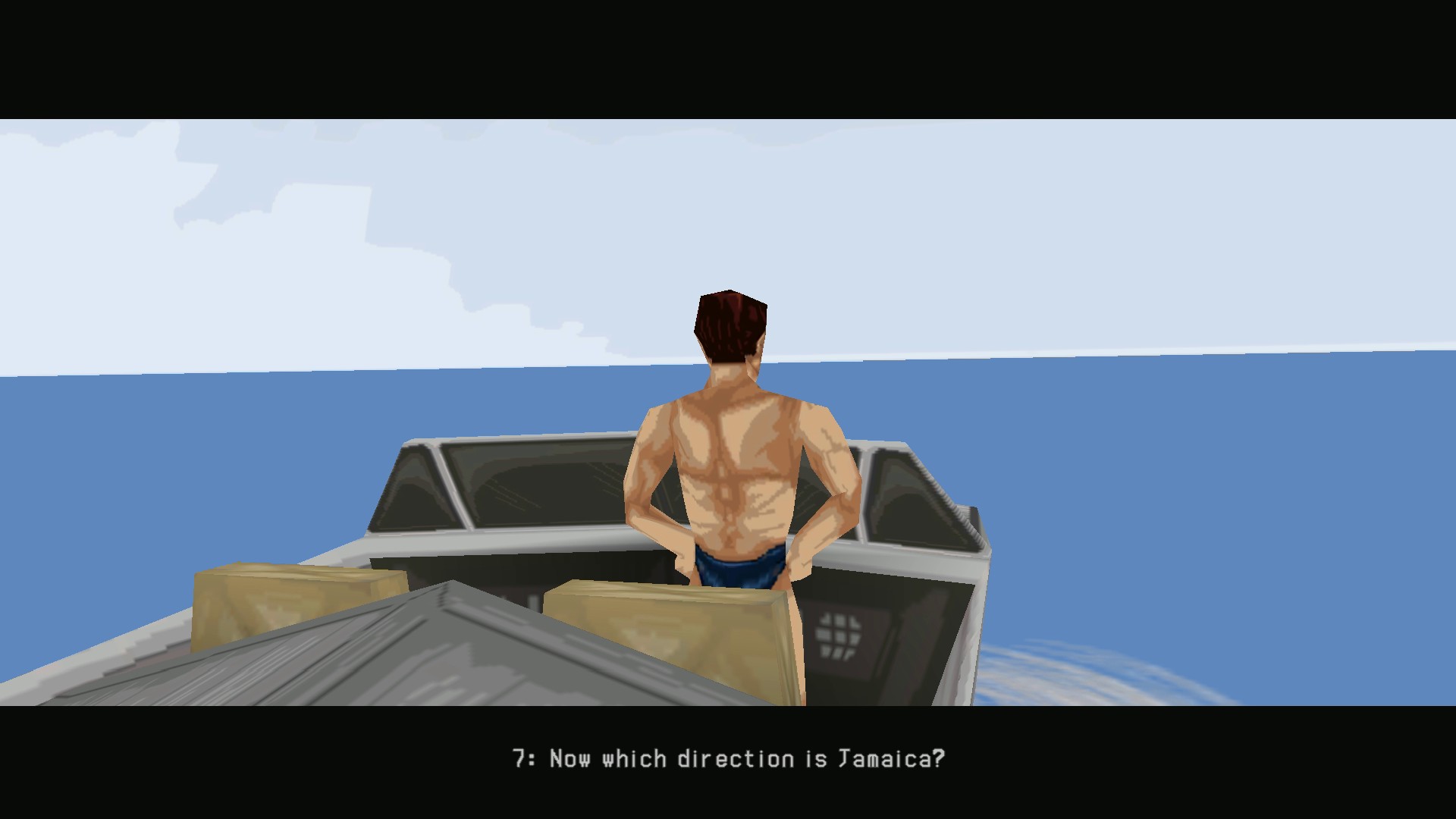 These small inconveniences are a shame because the game tries really hard to be enjoyable. It’s possible to use the environment to kill enemies (such as dropping a chandelier on their head) and there are various different phases before and during a mission (boat, free falling without a parachute, and so on). Each level has a few secrets to find, which are often hostages hidden behind locked doors or destructible obstacles. Despite the poor shooting mechanics, there seems to be a really fun game hidden in there. Sadly, the outer shell is too much of a pain to let us appreciate what’s on offer. 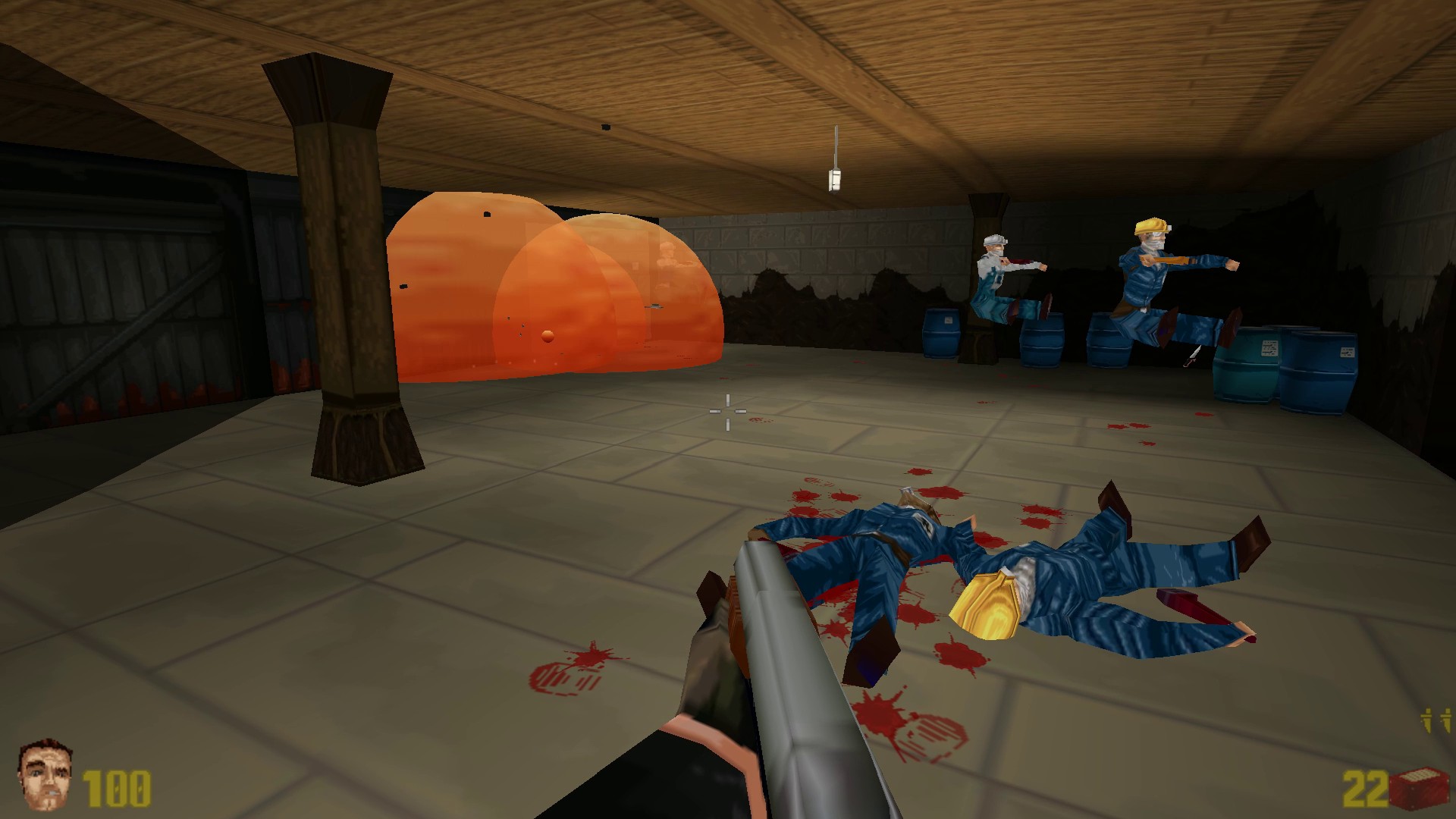 Saving your progress is the worst culprit here. If you almost complete mission 1 but quit the game for some reason, once you come back you see your % completion and think that you can resume where you left off you will frown. Wrong, you fool. You must start over. You clear the White House again, reach the basement and retrieve the nuke. While you fend off waves of incoming mooks, you experience a lapse in your attention as you witness an NPC sliding on the floor like a jet-propelled caterpillar. That’s agent 6 that you just freed, and while this was or wasn’t an intentional animation (there is room for doubt when enemy knives can hit you through walls), the result is that you die because you were too busy laughing to see an enemy hitting you from behind. There are no manual saves, but the game brings you to an early checkpoint not too far. And then you check your mission status and notice that any secondary mission markers have been reset. All secret hostages found have been unfound. You have to go back to the beginning of the mission and clear everything again. Once you are done (maybe after you died and restarted a few times), you come back to the tunnel leading to the nuke, only to realize that the door is irremediably closed. You try again a few times, still no luck. Until you realize that… the door trigger now closes the door instead of opening it, with no way to reverse it. Why? Because the checkpoint reset the whole level except for that door which is understandably opened, but walking on its initial trigger now has the opposite effect of closing it, making any progress impossible. Once you know it you can avoid the trigger, but as soon as you think about all the time that you wasted to finally wrap your mind around understanding this bugged save system, you reconsider your life choices and probably decide to quit this game and open a bar in Antarctica. 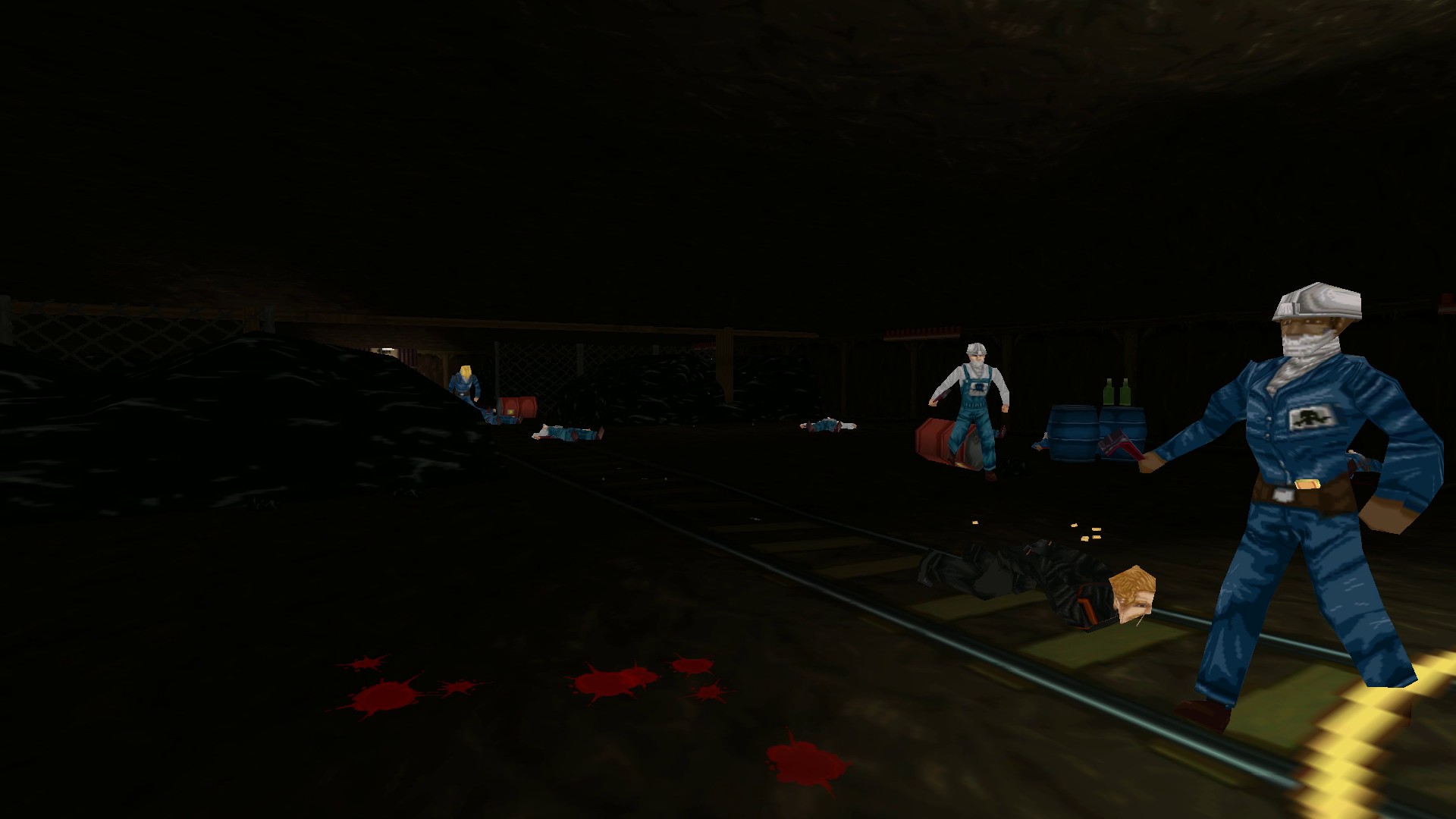 Survive this, and a boat sequence greets you with its horrible level design, mines that kill you (but you can somehow still stir your boat in the afterlife) and nuclear-powered sand that explodes your boat whenever you land on a beach. 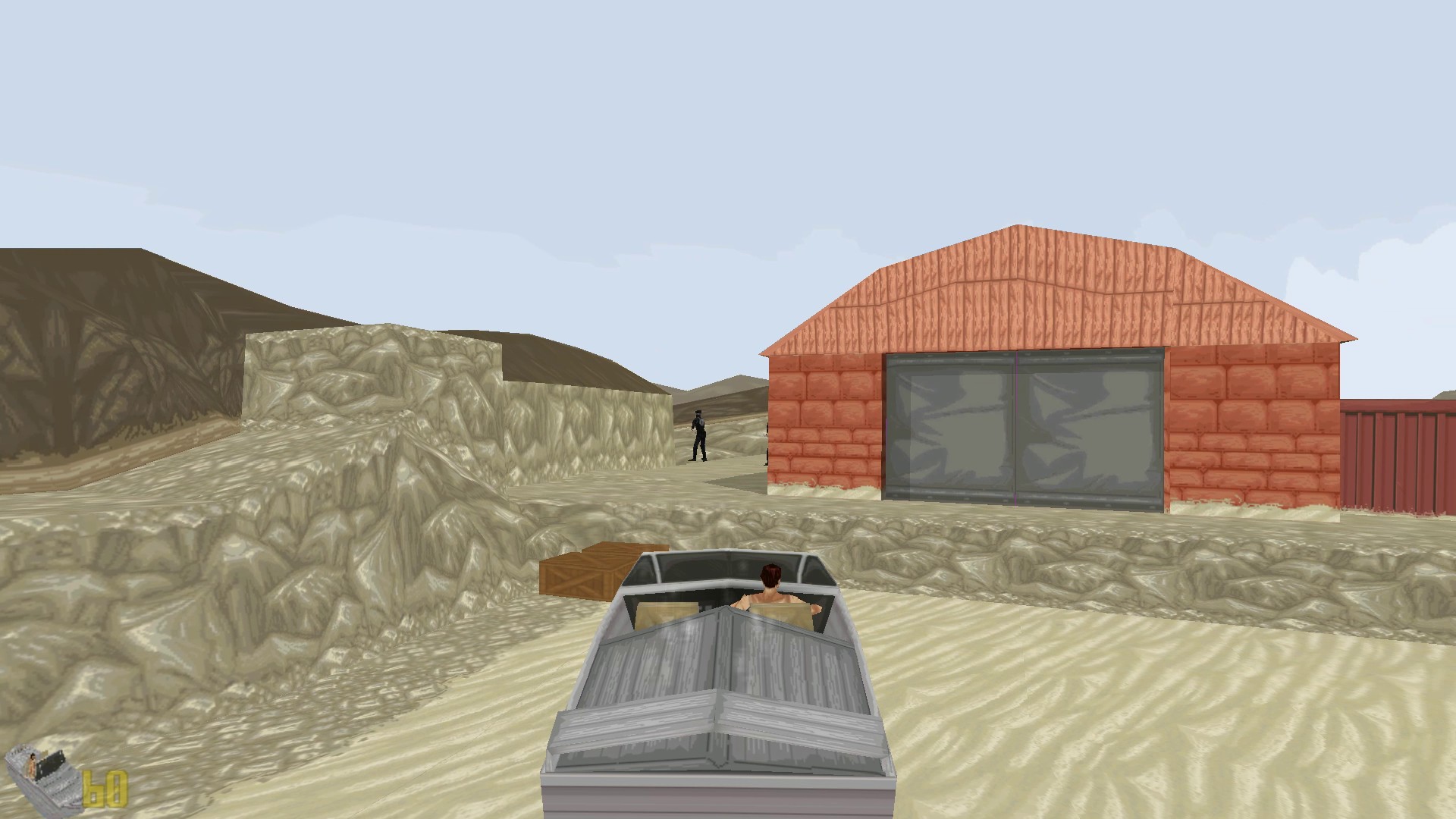 It’s clear that some effort went into this game. There are many secrets to find, variety in the situations encountered, and the 007 parody hits home. But it’s an awful shooter, and an even worse game with a completely broken save system. It would be disingenuous to recommend it in its current state.