This all-you-can-eat buffet will keep your turn-based and pixel-art needs well satiated.

If you already knew the Advance Wars series, Wargroove is basically the same, except that it takes place in a medieval fantasy universe rather than a modern military world. If you didn’t know about it, don’t worry, I will explain the basics of this mix between turn-based tactics and strategy.

First and foremost, I would like to point out that this game is huge. It took me more than a dozen hours just to unlock all that’s on offer. Just the campaign alone takes roughly 18 hours, and to that you can add an arcade mode in which you have to win several maps in a row, a puzzle mode with situations to resolve in a single turn, a skirmish mode to fight the AI or up to 4 local players on the same computer (hotseat), an online mode, and finally you can create and share your own levels and campaigns. If you get this game, it’s well worth the asking price. 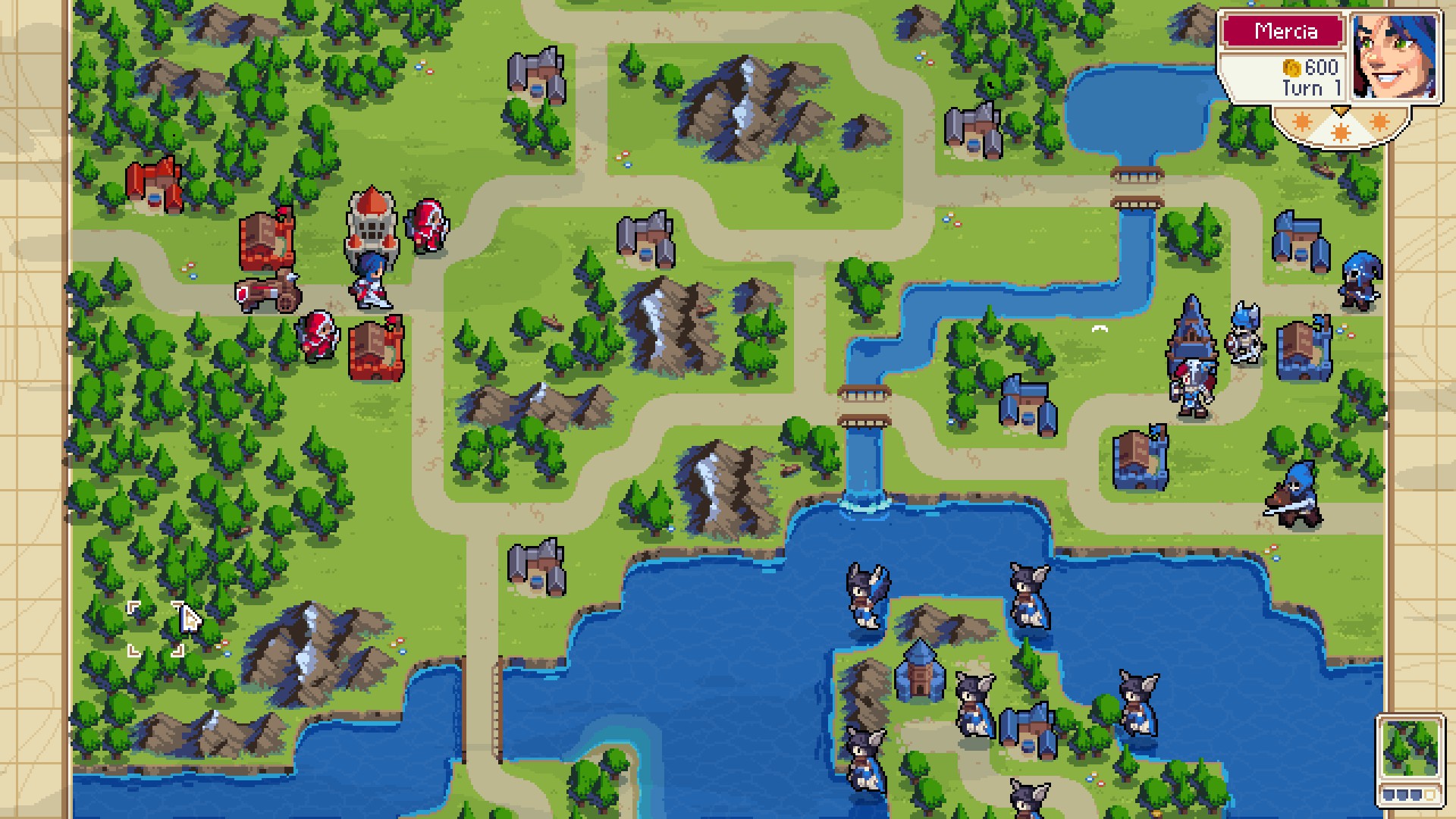 Now let’s talk game mechanics. It’s simple turn-based warfare, one player accomplishes all they can do during their turn, then the next player can play. You select a unit, then with one stroke you move it and trigger an action, such as attacking or capturing. The map is filled with little villages to capture, which yield gold at every turn. Gold is used to buy troops in specific buildings, that need to be captured on the map as well. Imagine some sort of turn-based WarCraft, except that you must capture buildings instead of building them. To win, you must either destroy the enemy fortress, or kill the enemy commander. The commander is some sort of hero, a very powerful unit that can charge a power, a so-called groove. These powers can be something like healing or teleportation, and they are unique to each character. 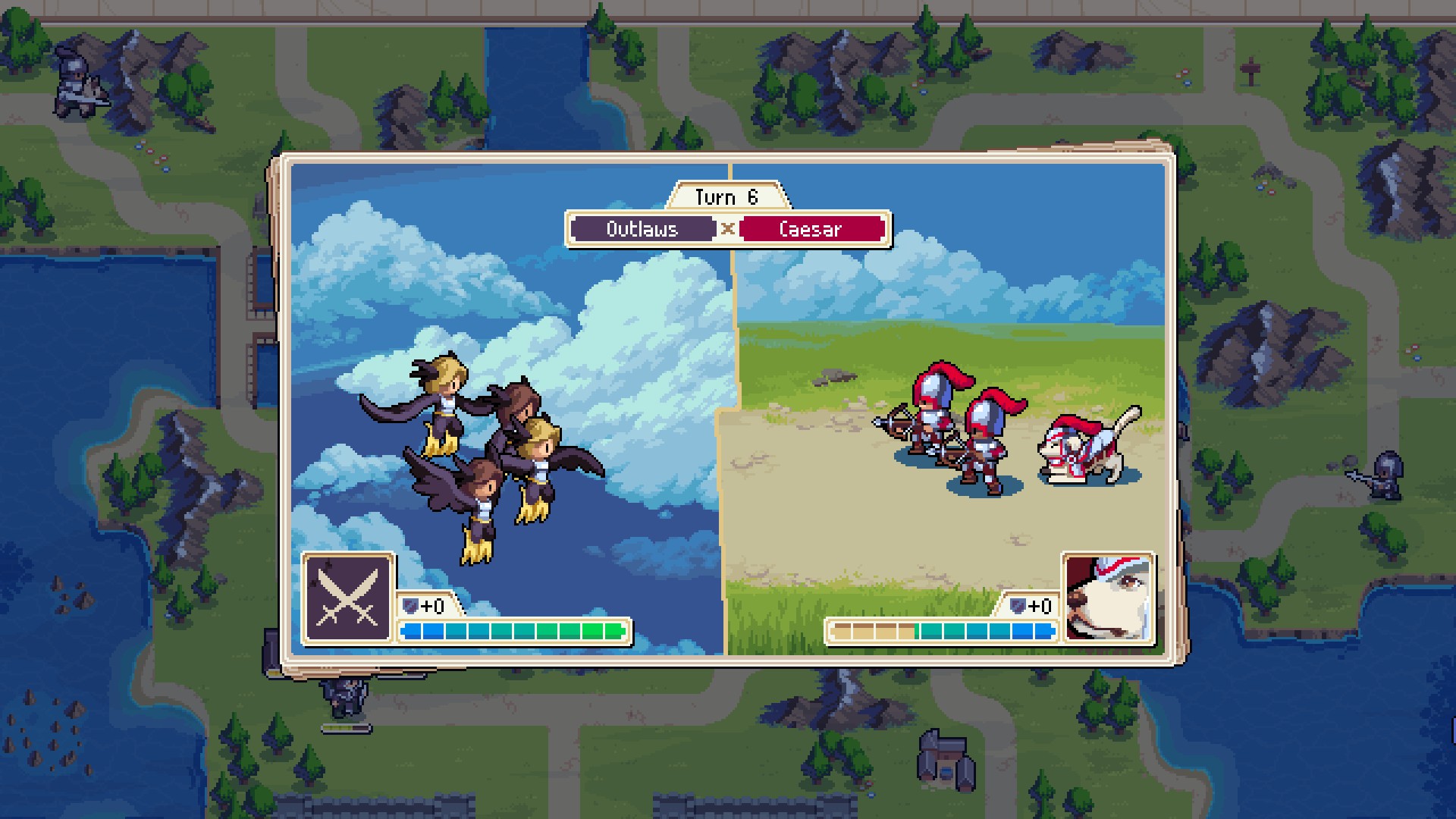 Commanders are the only difference between armies, and they even share the same stats, with those that have a crossbow somehow unable to shoot aerial troops. There are four factions: knights, the undead, desert samurais and plant people. But overall these are just reskins, each faction is exactly the same, only the visual style is different. It’s a shame, and the game’s biggest disappointment. 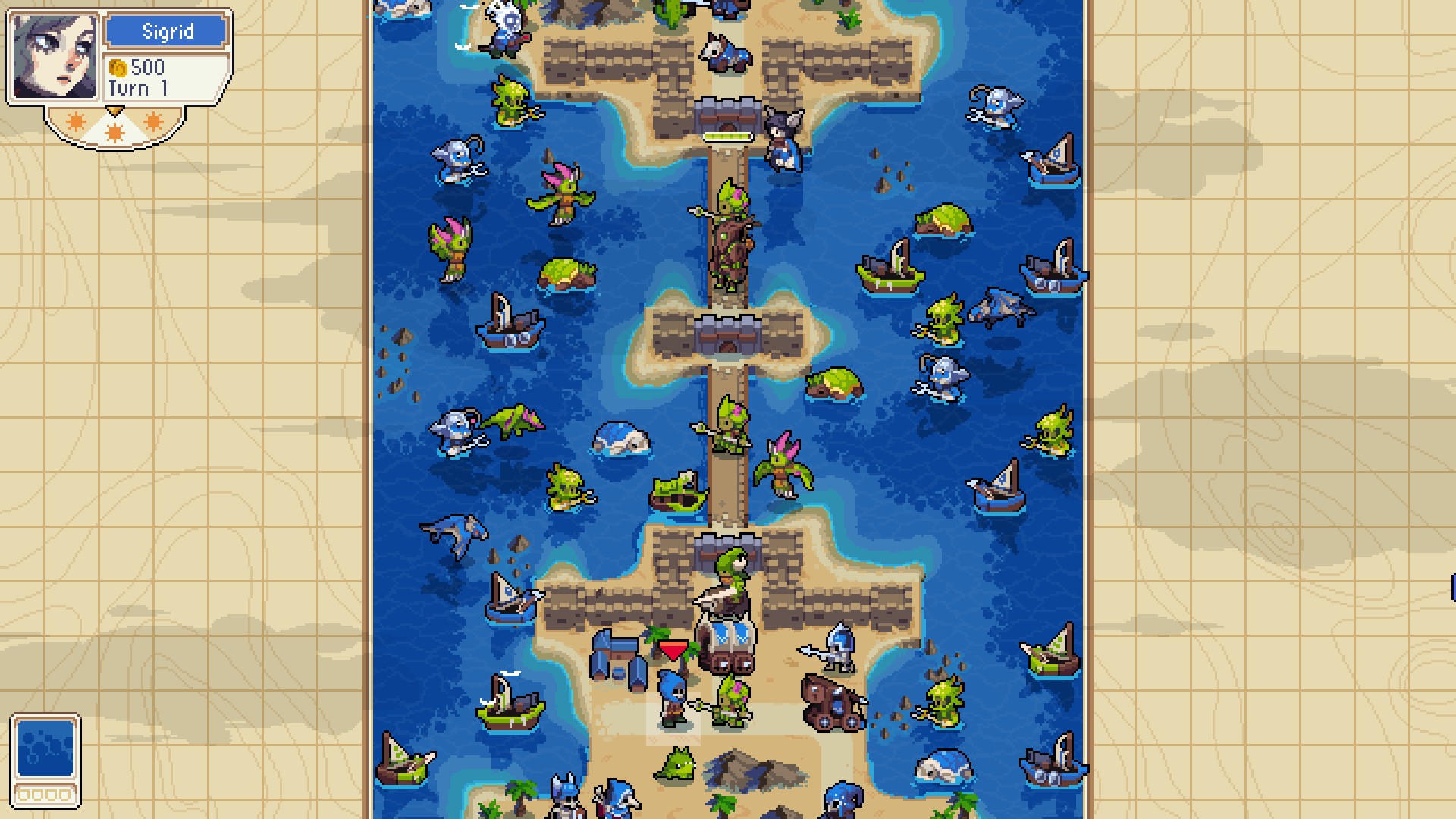 No pixel is out of place

The game is technically sound, I never ran into bugs or issues. The graphics are certainly the highlight of this game: superb pixel art and animations, every fight triggers an exquisitely cute back and forth combat. Small adorable detail, dogs are the only units that do not disappear when they die: they only leave the battlefield. It would be too cruel to murder them, wouldn’t it? Horses don’t have such luck. 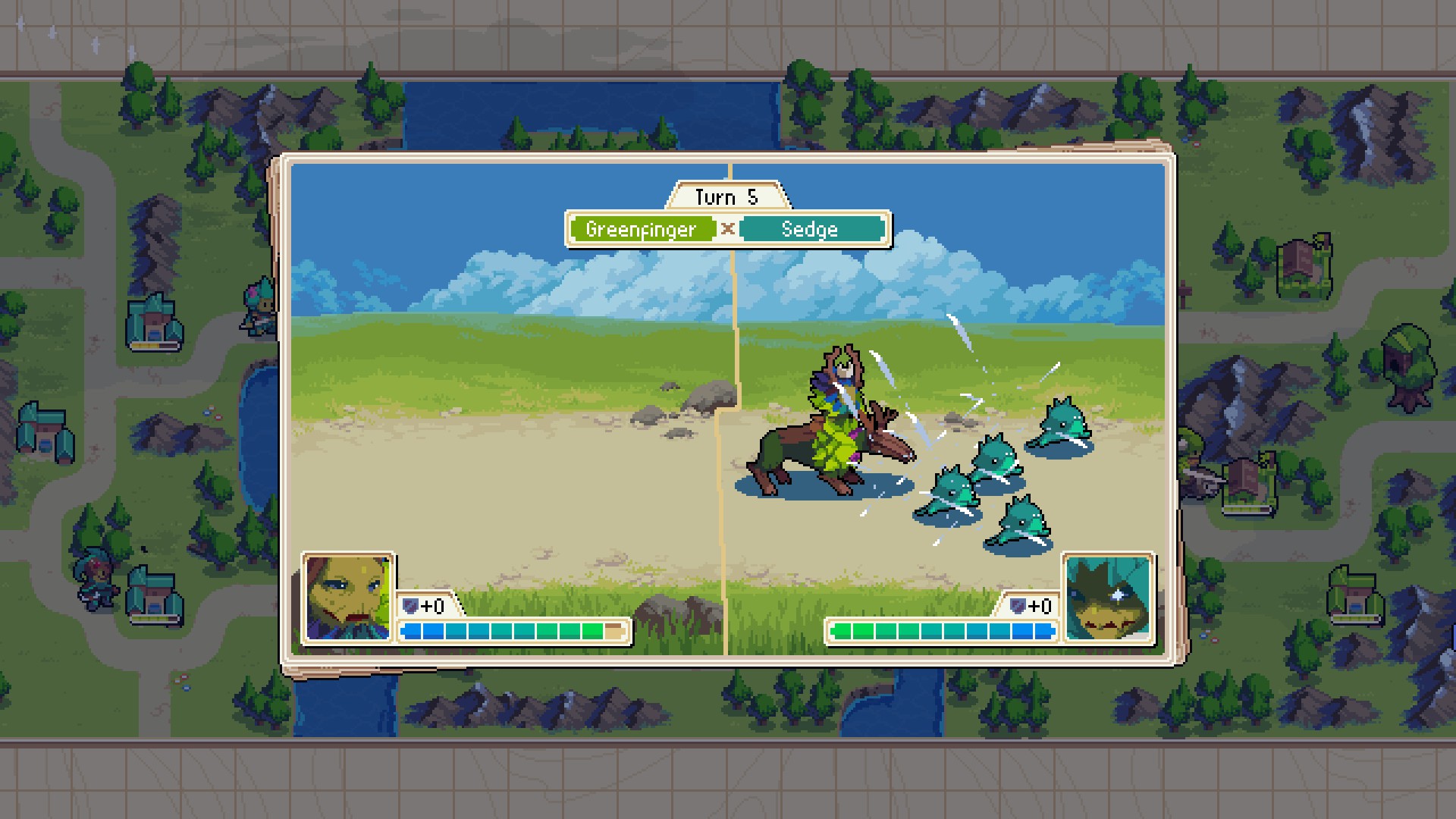 While the fighting animations are pretty, they are nothing more than eye-candy. After a while, I deactivated them in the options menu, and I was shocked. After removing what made most of the charm of the game, the base gameplay suddenly felt very simplistic and limited, not very exciting. Problem is, we live in an era when Into The Breach exists, and in the world of turn-based tactical games, there are a before and an after Into The Breach. This epic game was very smooth with its sequence of 1 move and then 1 action, perfectly legible, ultra-dynamic with unique attacks that can displace the player or the opponent, and most importantly each move had dramatic consequences. 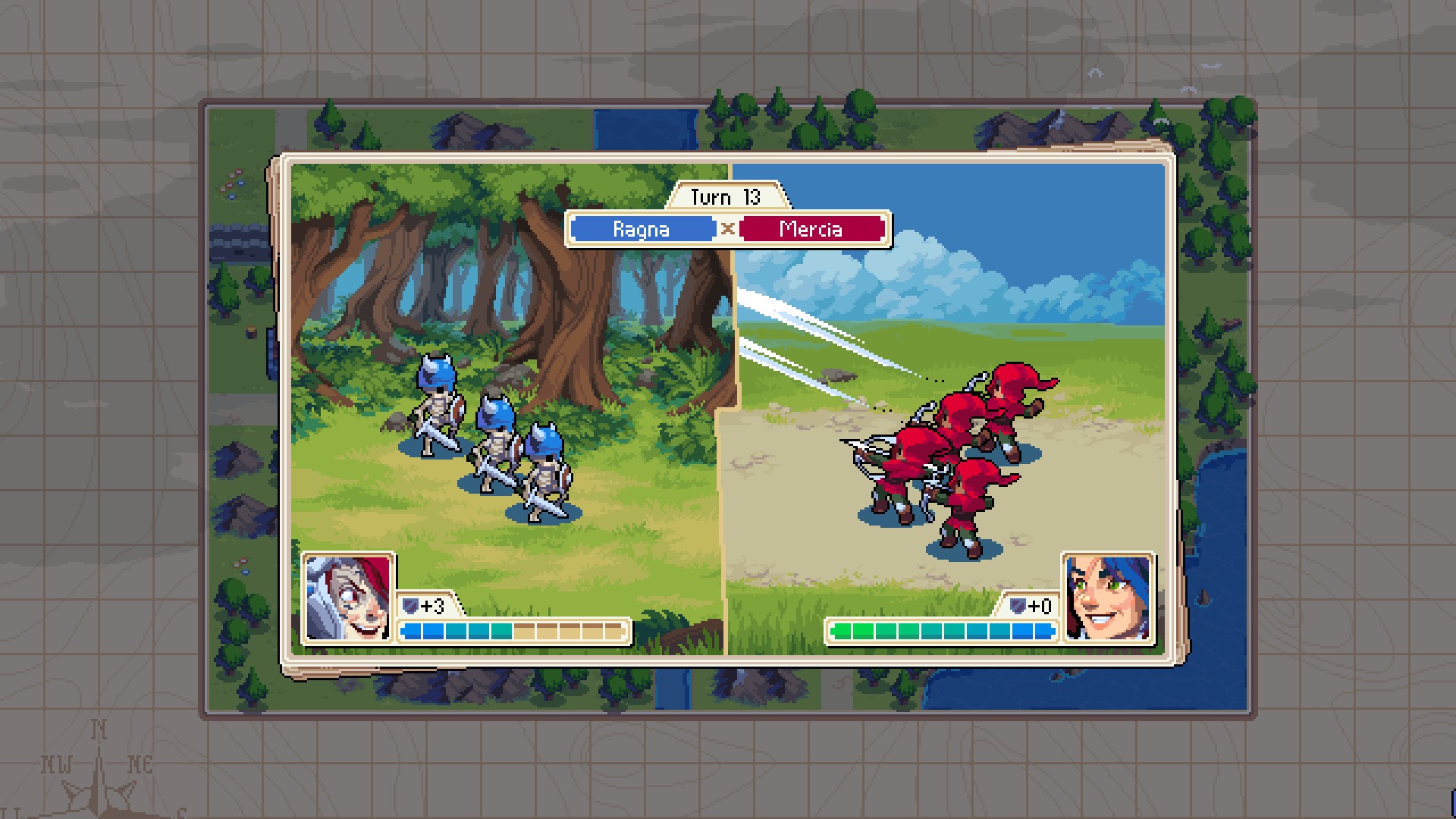 It’s not all fun and cute

Wargroove is not as good in terms of quality of life. This means that you sometimes male small positioning mistakes due to the interface, and you can’t even cancel a mistake. And then, there are lots of small moves that are simply not very interesting in terms of consequences. Since it plays on large maps, lots of turns can be required to move around your troops. Even worse, once you are in a dominating position with troops everywhere, it’s a nightmare to manage them all one by one. Actually, I would sometimes stop producing new units just because bringing them to the front was too boring. Furthermore, there are missions suffering from a fog of war that the AI completely ignores, and it does not feel right at all. 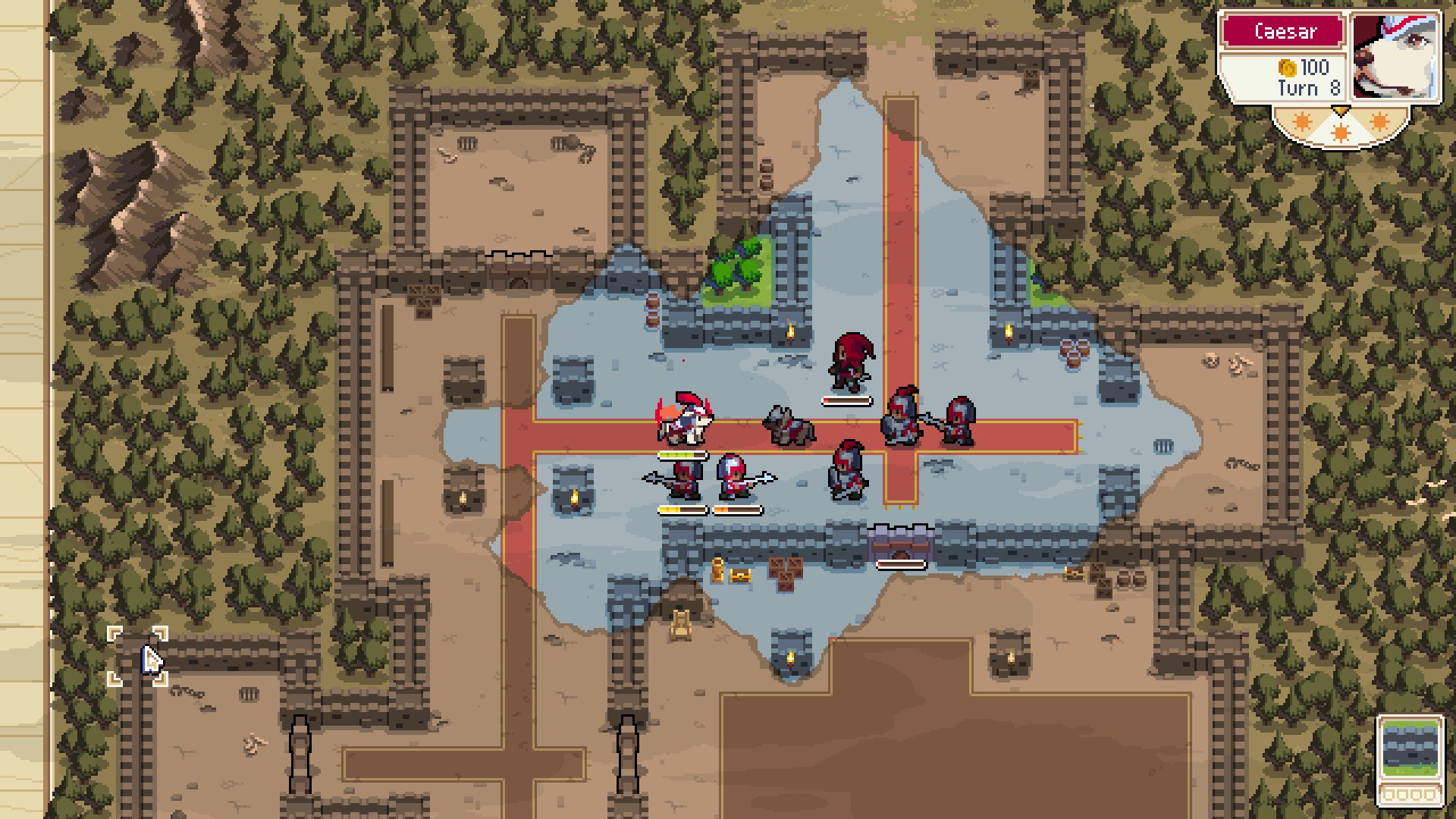 Basic units such as footmen and pikemen are important in order to capture buildings, but apart from that, along with other basic units they are slow, weak and not very interesting to use. Each unit has a special condition that allows it to deal critical damage, and also each unit has a damage multiplier against other troops that it counters. This shines when playing with advanced units that are able to one-shot the troops that they counter, but this is not the case with basic units. They can’t do much more than gradually decrease the life of their target, and injured units deal less damage. Damage dealt is proportional to a unit’s health. This means that basic units turn fights into tedious wars of attrition, decreasing the enemy’s life chunk by chunk rather than making each action a decisive one. 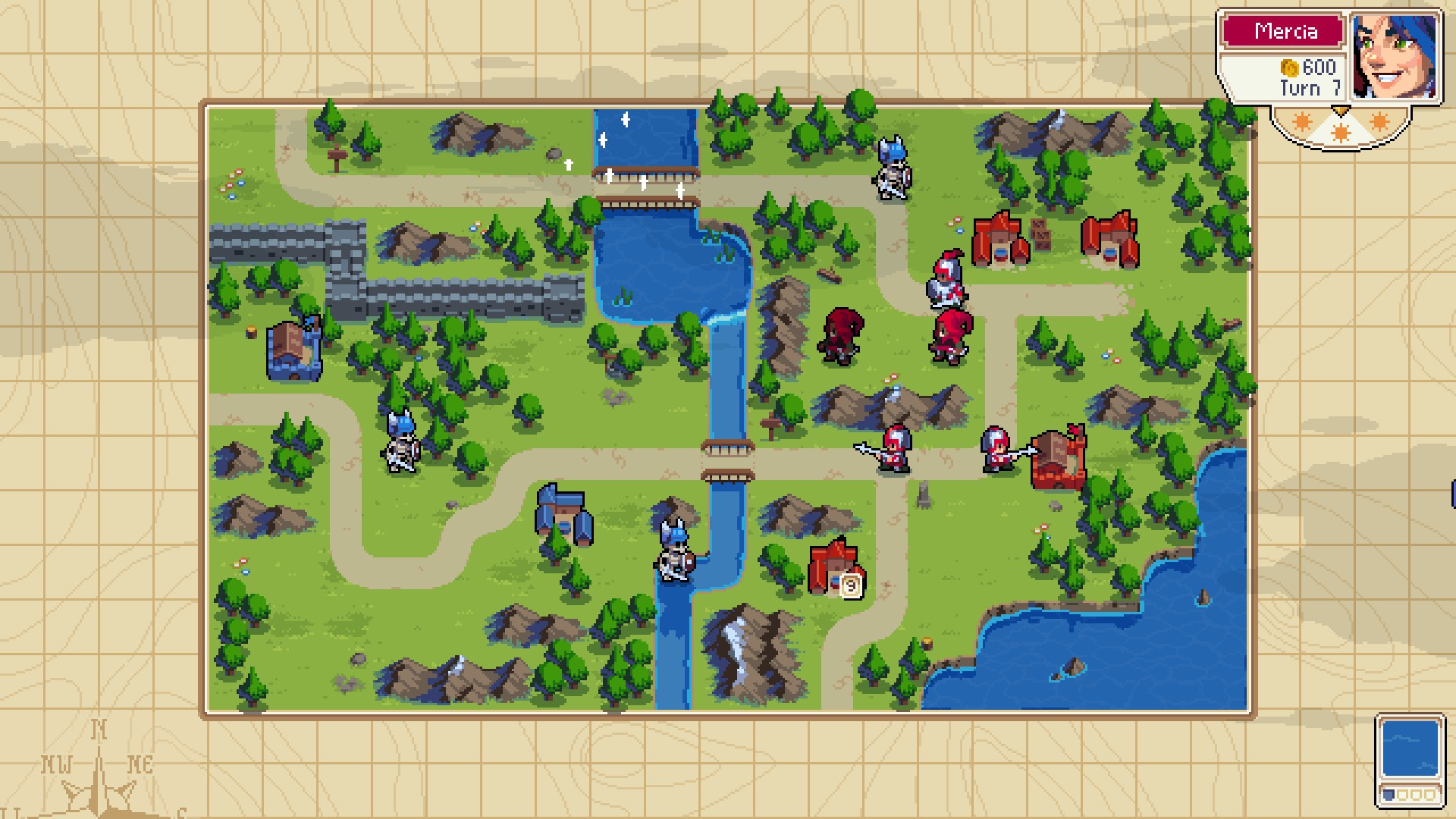 As is natural, you will only want to produce advanced units. And these heavy units really get all the advantages. Lots of health, massive damage, and they can move farther than basic units. It’s pointless to buy base units, except to waste time. That’s something that the AI really enjoys doing, and soon you have to manage a ton of small weak units in a war of attrition based on numbers. That’s honestly not what I enjoy in tactical games, and having to always go through that eventually made the campaign feel repetitive. 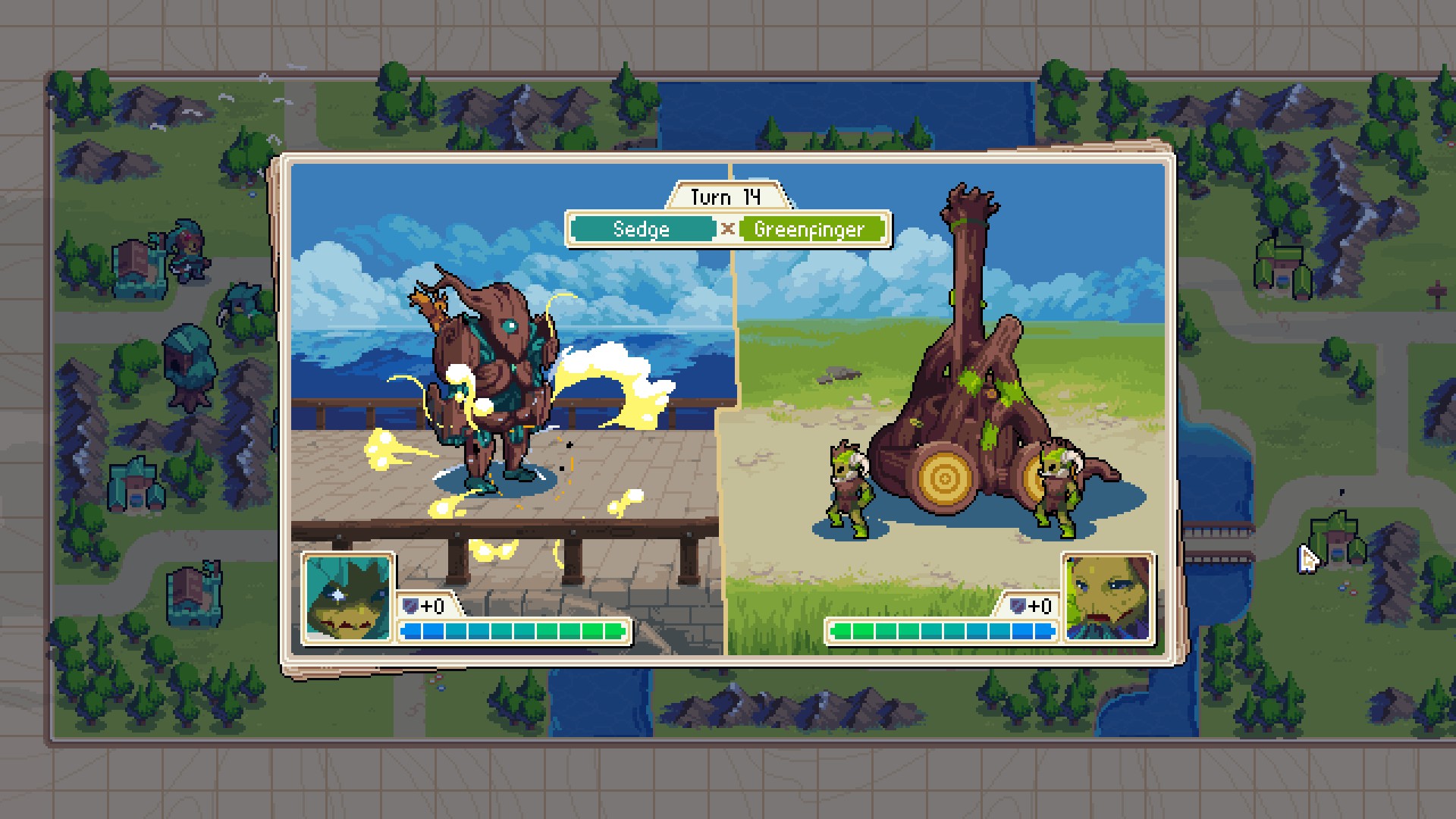 Your grey matter will turn to ashes

Each map can take from half an hour to an hour to finish, and the game doesn’t pull any punches. It’s not possible to save a game in progress, but that should come in an update. Then, there are often scripted events that will have the AI take you by surprise by arbitrarily bringing in fresh reinforcements to make your life a living hell. I have seen a lot of journalists and players complaining about the difficulty, and the weird discrepancy between these cute graphics and the extreme difficulty of the missions. The game lets you cheat a bit and modify some parameters, but it feels like a cop out, and most people are too proud to touch that. On my end, I actually felt proud that I managed to make progress without too many hurdles or restarts, and I even finished some tough mission with S rank. It reminded me of the difficulty of strategy games from the 90s, when it was mandatory to know how the mission was going to play out so that you could anticipate everything. In any case, there will soon be an update that lets you select difficulty in the usual manner, and the game is currently under what will soon be called “Hard”. 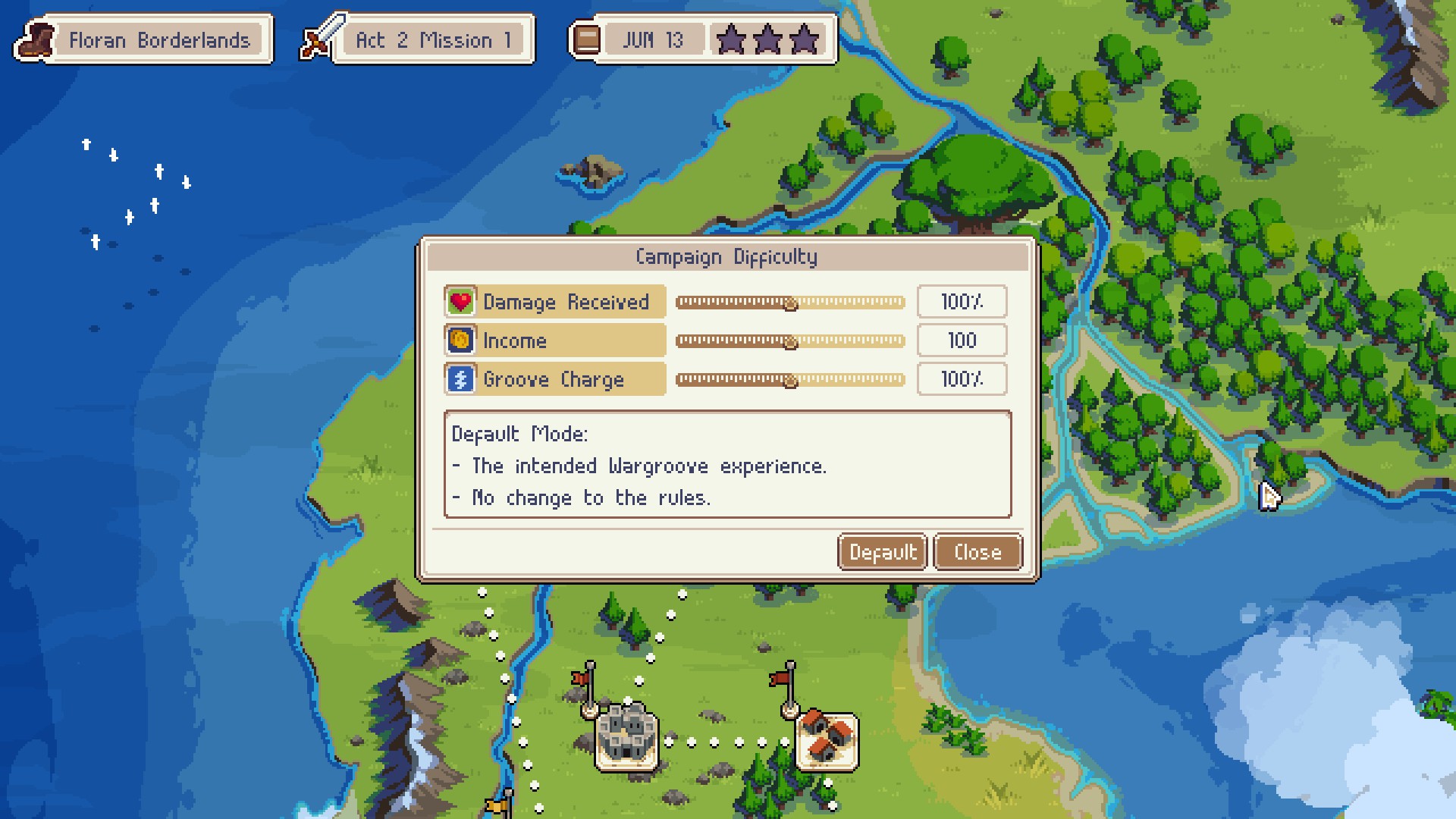 Even though I enjoyed the challenge, I eventually ran out of patience with the single-player content. I then played online, and everything changed. Whereas the AI had been drowning me under small fry, the human players I fought against were picking their troops in a much more interesting manner. For example, if I launched an aerial unit, my opponent would instantly produce an anti-air unit. So now I had to be very careful with my positioning, and find a counter. We were not playing with useless basic units, we were waging fabulous aerial battles as we shifted around our rock paper scissors, and each move was a determining factor in the tide of the battle. It’s against other human players that Wargroove reveals its potential, and becomes a subtle strategy game. Against the AI I found the game to be tedious and by-the-numbers, but against another player it truly is captivating. 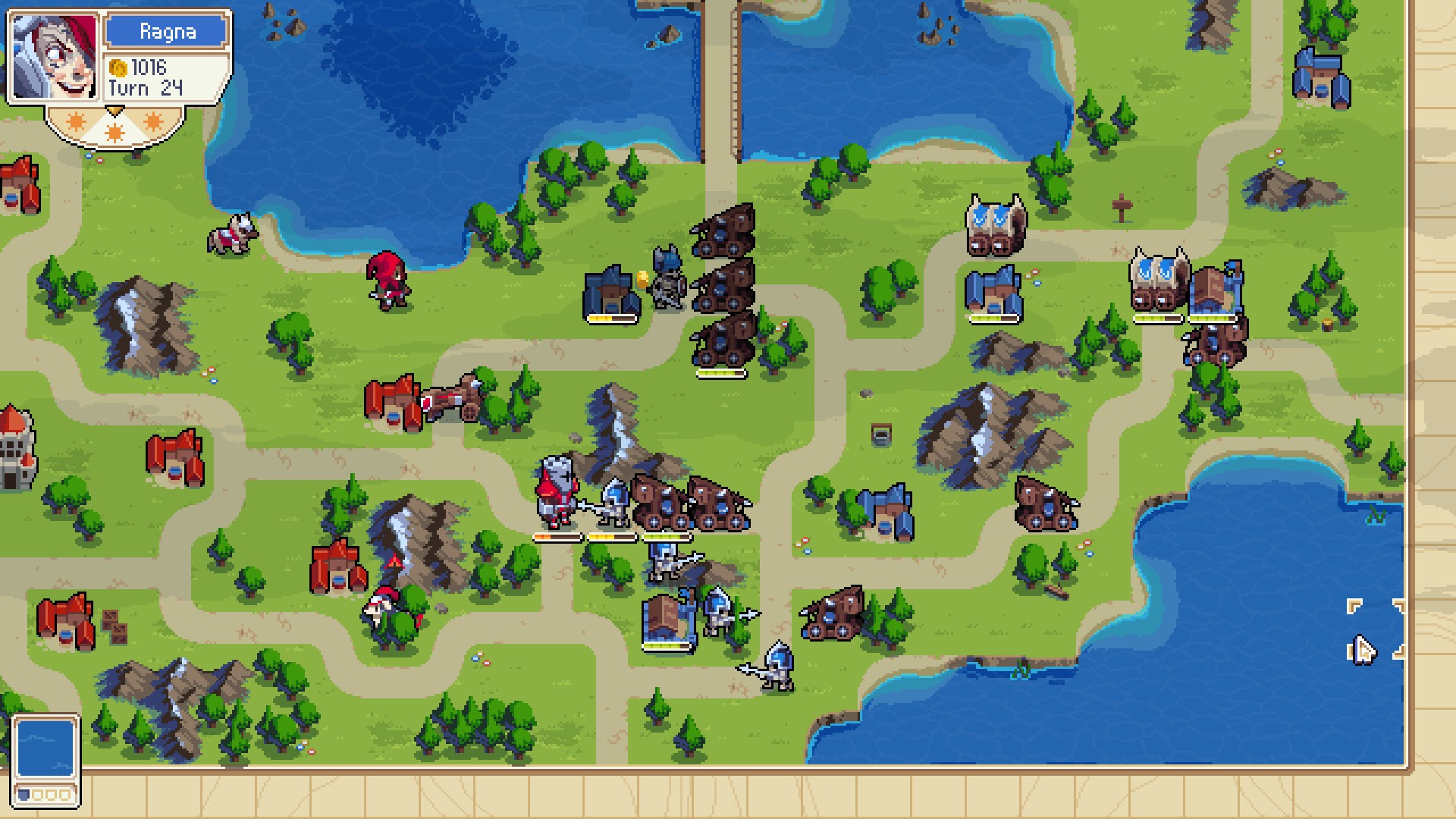 Just a small warning, even though it’s nice to have the hotseat for local play, those that have not played the single-player campaign might be overwhelmed when facing a large number of units to learn, so I will focus on online play. At the moment, I never had to wait for more than a few seconds before finding a match. The game was released recently and was quite successful, including on Nintendo Switch, and there is crossplay between all platforms except for the PS4 that is utterly alone. Another nice thing is the possibility to play the game asynchronously, meaning that you can close the game and come back later to play your turn. There are even Steam notifications to let you know. 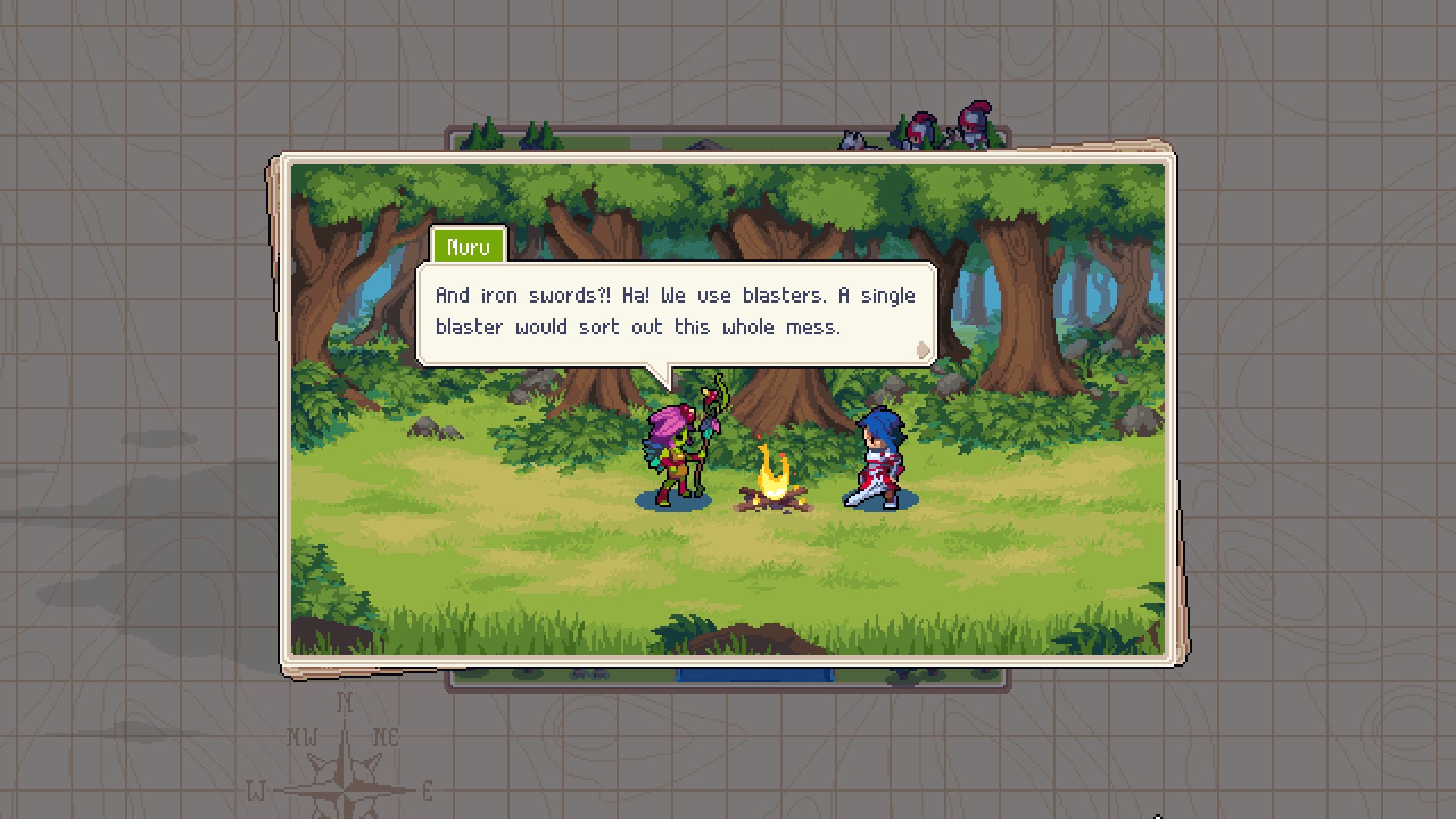 To conclude, Wargroove is not ground-breaking, but it’s still a great game on its own merits, and clearly a labor of love. It will please Advance Wars fans, but it might seem very clunky and dated to those who played Into The Breach. Nonetheless, Wargroove is very generous in terms of content, there is a lot to do, and considering the spicy difficulty, you can keep yourself busy for a long time to come and the game brilliantly finds a new life with custom content. I was eventually tired with the lengthy fights demanding a lot of redundant micro-actions that became a war of attrition against the AI, but I renewed the pleasure when I battled against other players: every single decision mattered, managing positioning and counters had an important strategic reach. Besides the small things that bothered me, I would say that the only big flaw is that the four factions are identical, it would have been better to provide less content, but content that feels more unique.