Burden was only in Steam’s Early Access for a relatively short time, which is a shame. It could have been so much better!

In Burden you play a minimally realised protagonist in a minimally realised post-apocalyptic world. You’ve somehow managed to find yourself at only source of fresh water in the desert that surrounds you — a well — and it’s your goal to build up a base around it and survive. I don’t know if there’s any end-game content or if the game continues on in the same way that it begins.

At least initially, anyway, the game provides no background or motivation for anything that you do beyond surviving, but if what I’ve seen so far is indicative of life in the world of Burden, I’m afraid I have to say that I don’t see much point in the struggle. You’d be better off dead.

Burden‘s developers seem to be going for a desolate-looking post-apocalyptic setting and they’ve achieved that in two ways: the world is big, but almost entirely empty; and the view distance is very short, with your vision blocked after only a few metres by thick dust churned up by the winds of the endless storm that blows across the world.

At first it’s sort-of interesting, such a bleak view of the future. But after an hour of staring at drab browns and too-bright reds, and trying to peer through the fog-like dust that doesn’t quite look right, it all becomes a bit frustrating. The limited visibility does provide a sense of abandonment, but ultimately it feels like a gimmick, or an excuse for poor graphics and an empty world. There’s also a weird clipping issue that’s exacerbated by the short view distance: objects are clipped earlier the closer they are to the centre of the screen, so if you run straight towards something you’ll see it later than if you had approached it an angle.

Objects in the world are few and far between, ranging from miserable-looking flora through to some very weird — and often aggressive — fauna, and human NPCs, of course. While the fauna is interesting in appearance, it behaves strangely — thanks to the rudimentary AI and oft-janky animations — and often races about completely unnaturally. NPCs often stand about doing absolutely nothing until you trigger some behavioural condition. There are relics of the world past littered about the desolate landscape, too, but most of these seem to be non-interactive, and there aren’t enough different assets to offer more than a passing interest when you first encounter them. 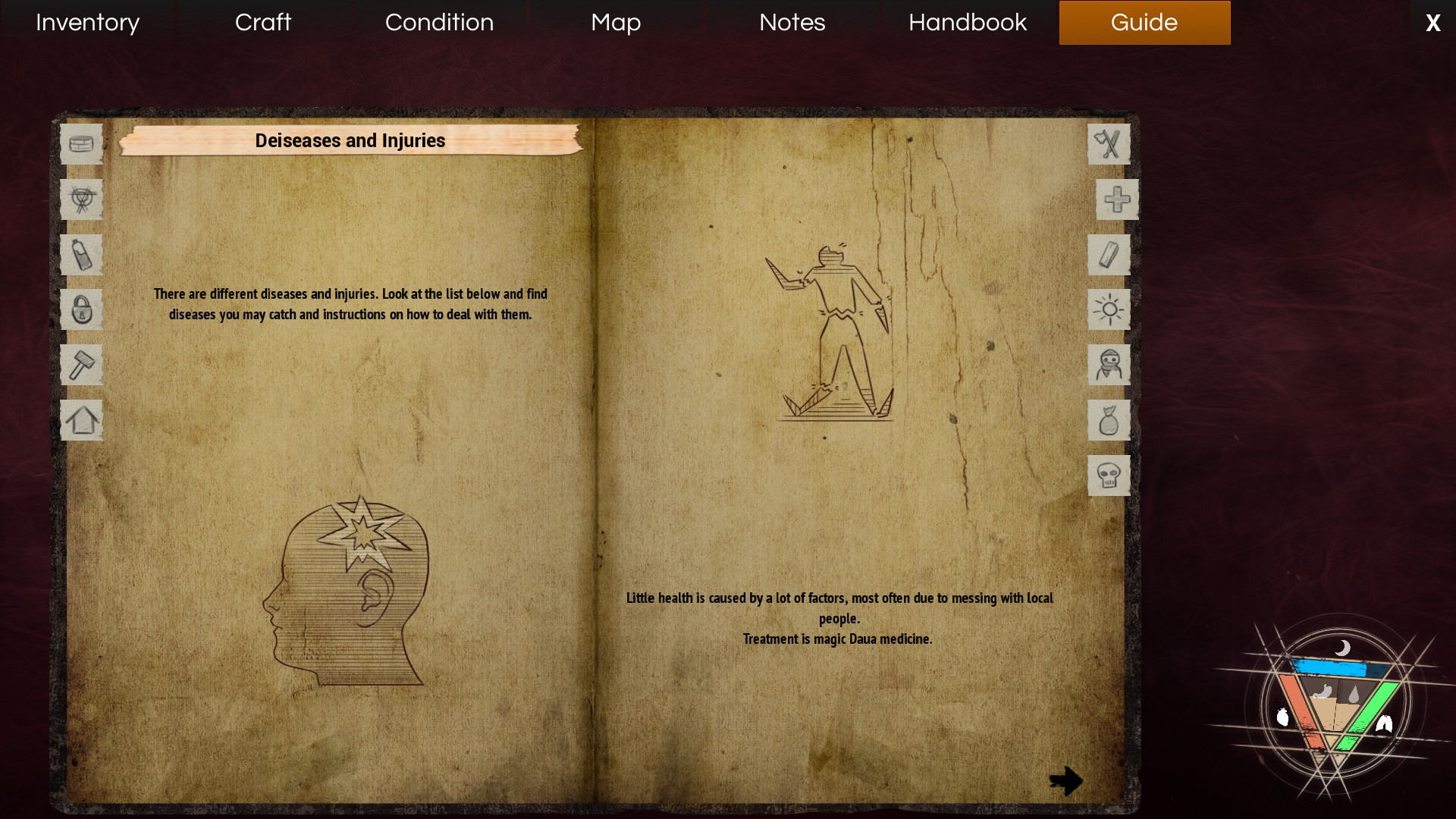 The interface looks a lot like a placeholder; from the full screen crafting / building / sleeping dialog to the many near-empty tabs and poorly categorised guidebook, the whole lot complete with countless grammar errors (“Fractions” and “Builing”, anyone?), it all feels like an early EA indie game.

Music is minimal, but mostly fits the tone; the sort-of rock / metal combat track doesn’t quite fit, though. Sound effects are basically okay, but seem to be poorly normalised and localised; you’ll hear distant creatures as if they’re on top of you, while NPCs can sneak up on you from across your home clearing in complete silence. The soundtrack basically works, I suppose, but could definitely use some improvement.

Performance was mostly good on my GTX1070-based laptop, but I did encounter a few short freezes and stutters, mainly when looting bodies. 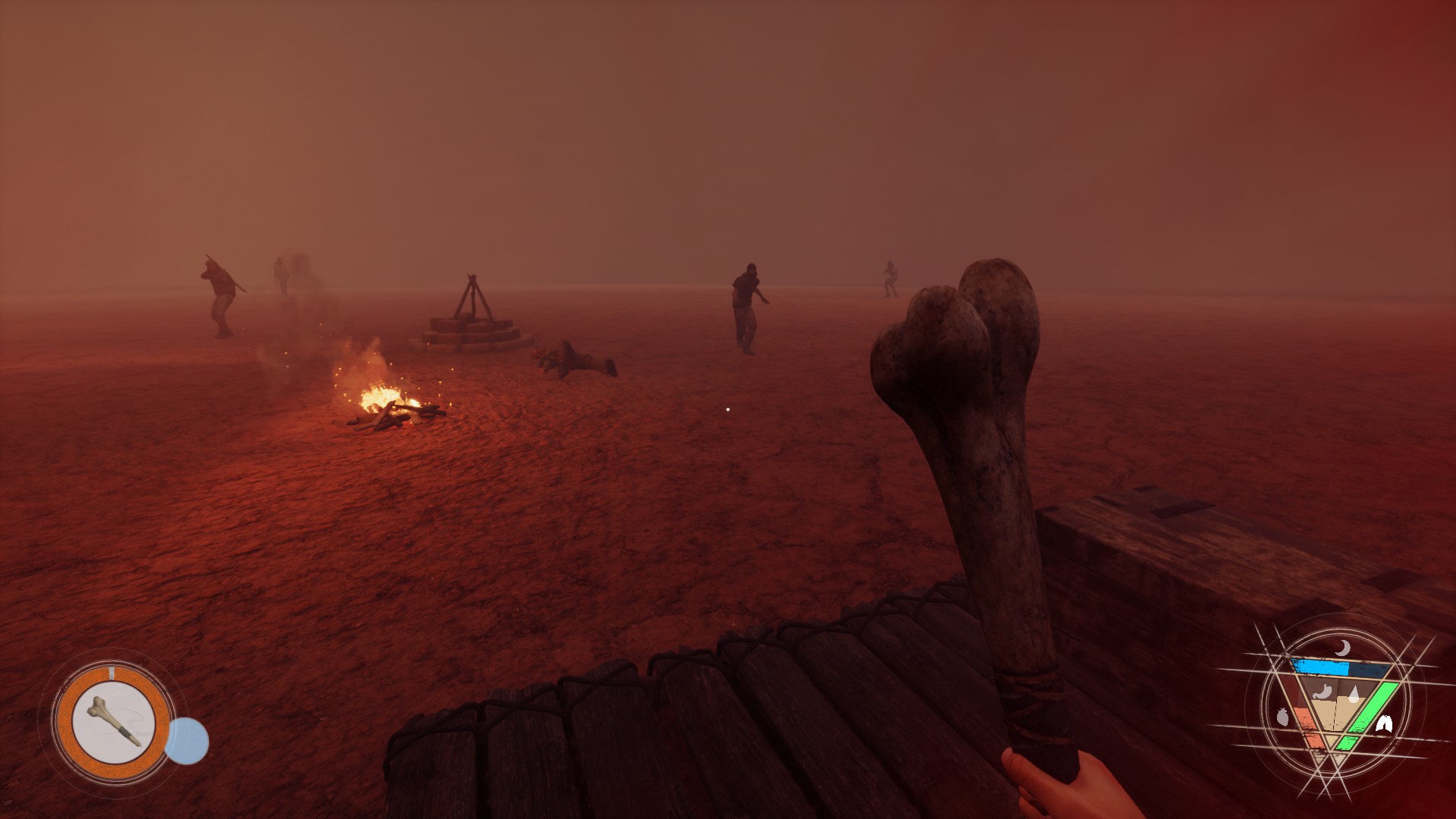 Burden is a first-person survival-crafting game. While on the surface it’s very similar to most others in the genre, with limited inventory slots, material-based crafting, basic base building, and the like, it plays more like The Long Dark than it does Rust or Conan: Exiles. There’s no running about hacking away with a home-made stone axe, or building convoluted architecture. Instead, harvesting requires no tools and is time based, simply showing a dialog counting down until you’re done, then popping up the inventory window to grab your loot. And building is very limited, indeed; assuming you can even live long enough to find enough wood from the randomly spawned flora to build anything at all!

I believe the world’s terrain is static, but the objects and creatures that spawn upon it appear to be procedurally generated each time you leave your base camp (or after travelling a certain distance away from them, perhaps), making it normally impossible to revisit a promising area. Though I’m a fan of procedural generation, here it makes the world feel even more empty, and exploration pointless. When inventory capacity is so small that harvesting one rock fills it, it’s extremely frustrating to finally find a source of material and only be able to carry a fraction, knowing that the rest will simply disappear after you leave. Coupled with the weird compass that doesn’t seem to work right — perhaps on purpose; I haven’t yet discerned a pattern to its failure — this design decision further sucks the enjoyment out of exploring the map, which is usually a big part of a survival-crafting game’s appeal. 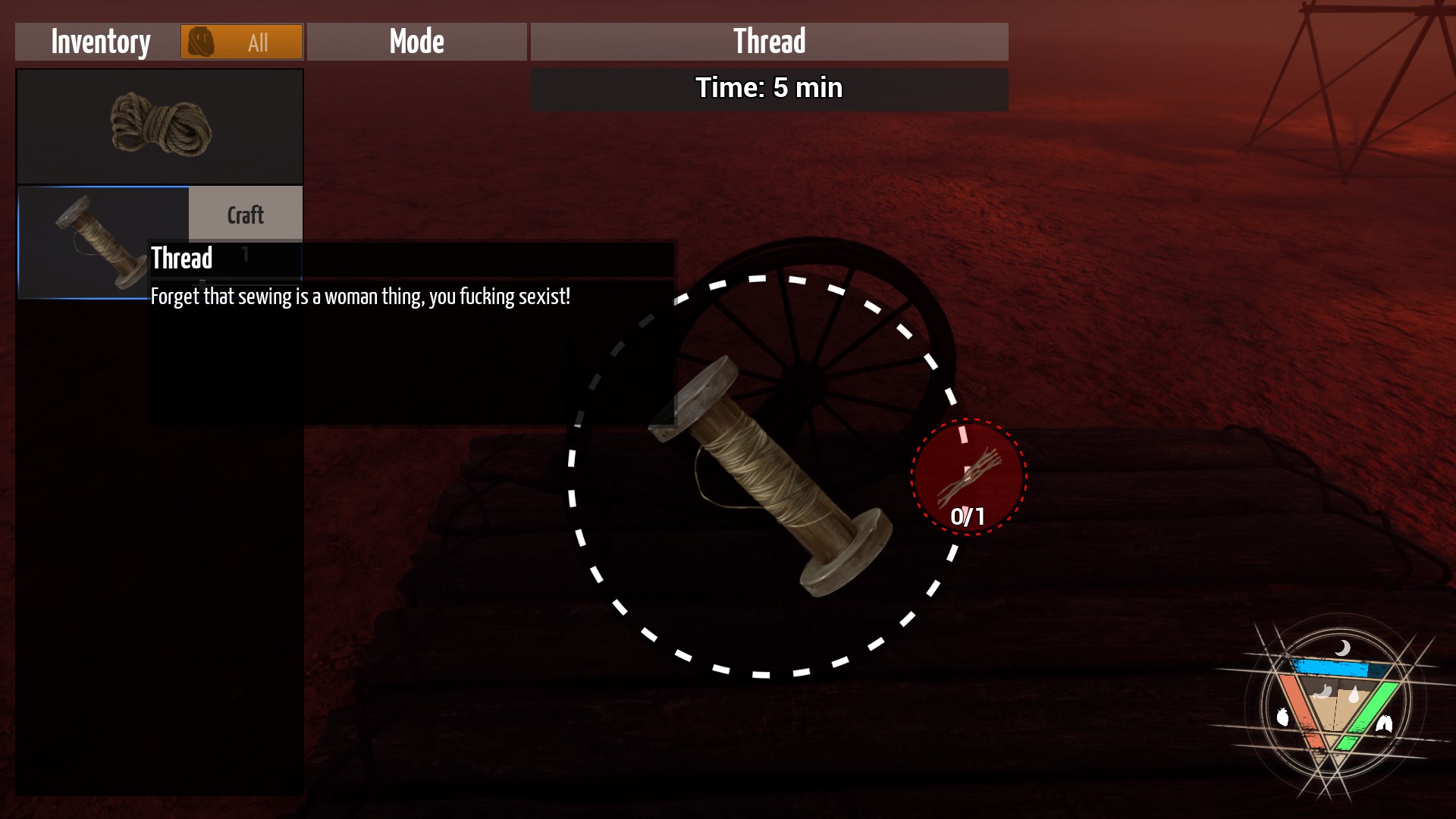 Survival elements are limited to food, water, and sleep. I haven’t had any real issues maintaining these so far, but I’ve also not lasted more than a couple of in-game days in any of my attempts, so it’s possible they’ll become much more important as the game goes on. Harvesting of resources is inconsistent, with the most likely looking sources — old cars, skeletons, etc. — being non-interactive and thus not providing any resources, but occasional lone street signs and fresh corpses being the most common sources of metal and bone. It simply doesn’t make sense.

The main game loop is ill defined, too; I can’t work out how the developers actually want me to play. After a few frustrating hours I found that saving and reloading seems to cause some change to creature and object spawns, and appears to occasionally be the only way to survive a RNG-induced meltdown. Given the game’s predilection for throwing ridiculously over-powered enemies at you, it seems that the way you’re supposed to play is to save often and reload if things don’t go your way, which breaks the sense of immersion entirely! 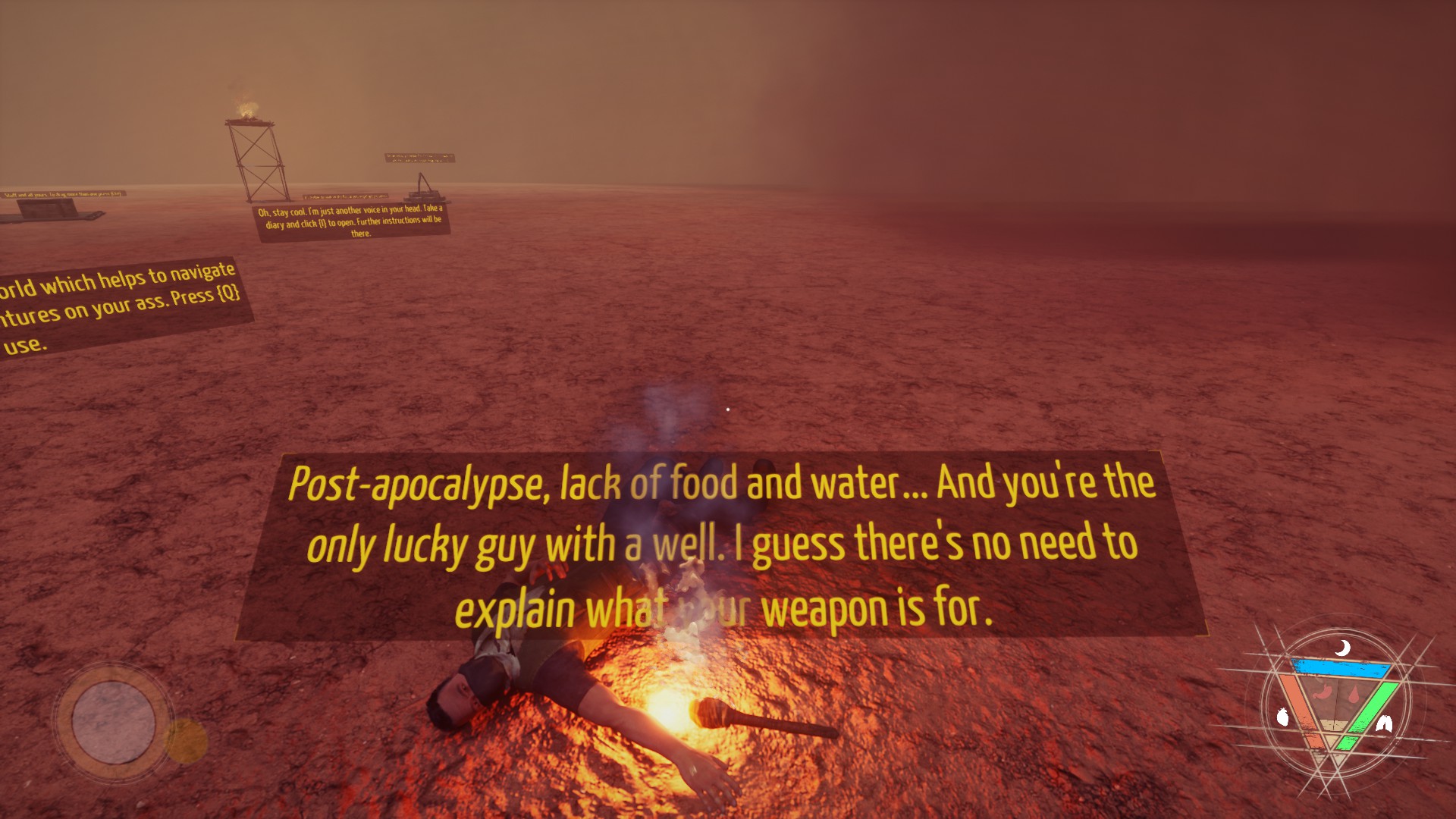 There’s no tutorial, though some pre-release gameplay videos show an option on the main menu that seems to have been removed, and the game introduces you to gameplay through a handful of in-game messages and the afore-mentioned poorly explained text guide. Though the gameplay itself seems simple and familiar enough to make me feel that I should know what I’m doing, I keep being overrun within a couple of days by packs of raiders with far-better equipment than I can find. In my best effort I killed five of them with my crappy bone club, but the three that were left picked me off with guns before I could even get close. Maybe I’m doing something wrong, but if so the game isn’t helping me to learn what, and sitting through half-a-dozen hours of that happening has not been a fun experience.

Ultimately, I’ve found the game very, very hard to get into. And I love this genre! It’s possible that there’s some sort of over-arching story that I simply haven’t seen; I haven’t managed to even last long enough to see the game’s gimmick: a sort of backwards character development where you accrue penalties rather than benefits as you advance. 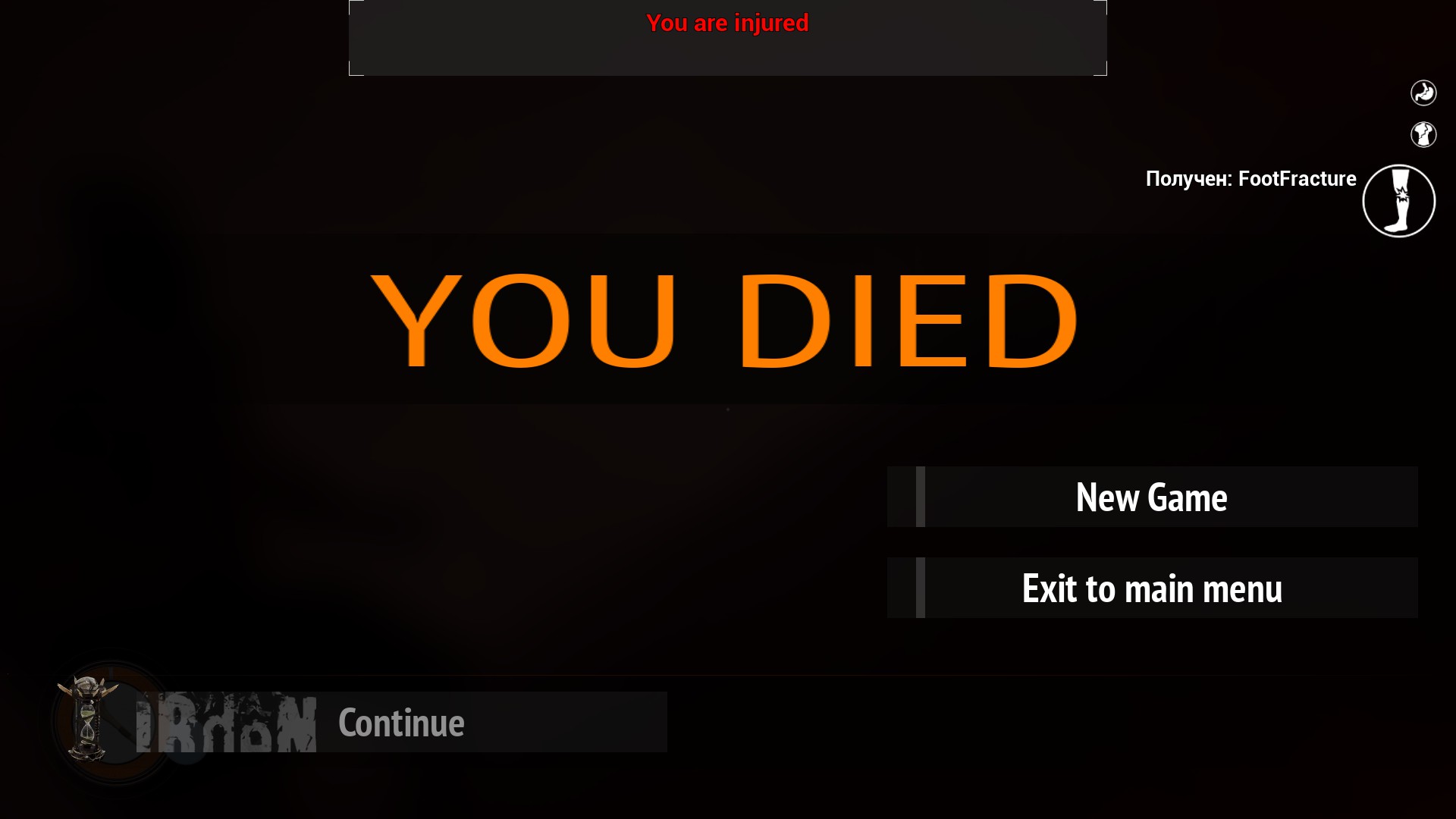 When I receive a game to review I try to make sure to give it a fair go. Burden makes that pretty difficult.

The game is extremely rough around the edges; it should still have been in Early Access for months yet. It has some good ideas, but those ideas are hidden behind hours of barely understandable drudgery and frustration, making the game very hard to like. There might be a worthwhile game in here somewhere, but I’m afraid I gave up looking for it.