This weirdly named visual novel ticks all the right boxes; it’s just a shame there’s not more of it — yet!

9-nine-:Episode 1 is an anime visual novel from PALETTE, published by Sekai Project. I think it’s also the most weirdly named visual novel I’ve played, but the plot is no weirder than most!

The game is the first in a series of mystery stories centred around the small town of Shiromitsugawa in Japan. Shiromitsugawa is known mainly for an anime that was written and set there as a revitalisation project, to try to attract attention and tourists. The anime is based on the town’s folklore, and focuses on a group of Artefact Users who wield supernatural powers given to them by objects from a different world. Though Episode 1 is told from the point of view of a young man in school, Kakeru Niimi, the story mainly focuses on a young woman he knows from his class, Miyako Kujo. Miyako also happens to be the daughter of the president of the huge Corona Beverages Corporation, based in the town.

The story begins with Kakeru and Miyako, among others, working at the town’s annual anime-themed festival, which is held at the local shrine. There’s an earthquake that shakes every one up, prompting the early end of the festival, and smashing a precious relic.

Note: while the current tags on the game’s Steam store page include “sexual content” and “nudity”, the Steam release doesn’t feature either. Sexual content is limited to some very tame jokes and innuendo, and the protagonist’s habit of starting an examination of a female character by staring at her chest, and the most erotic image in the whole game is a slightly racy image of one of the main characters in cosplay in the first scene. There is, however, a free R18+ patch available from an external website (Denpasoft), which adds a sex scene to the game’s second ending. In what seems like exceptional respect for a commitment made to Valve to not have the DLC available on Steam, the developers have taken some care to disable the patch during streaming or when taking Steam screenshots, but it is otherwise fully functional.

Visual Novels are mainly about writing and art, and 9-Nine has commendable quality in both. 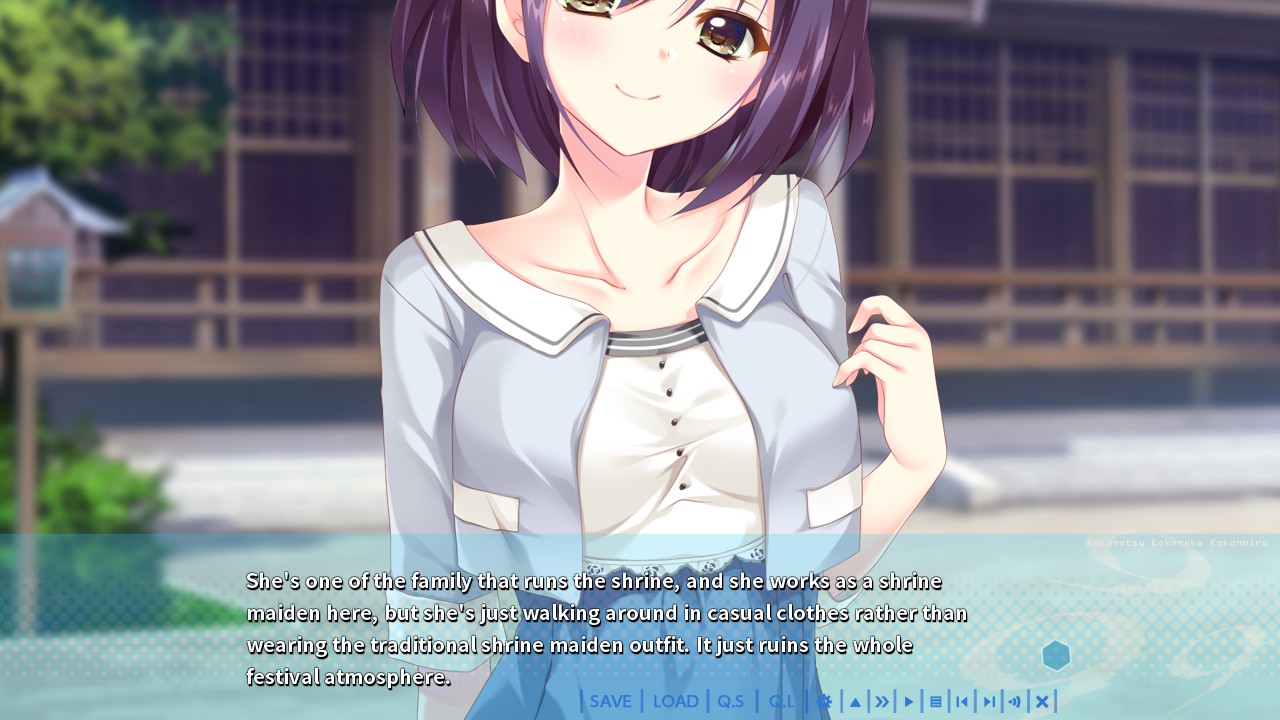 The large paper-doll character sprites are beautifully drawn and merge seamlessly into the occasional CG image. While there’s no Nekopara-Volume-0-style complex facial and body animations, the use of big, bright animated comic-book style emotion indicators, such as large exclamation or question marks, is good fun and works well, and the other large-scale sprite animations are scripted well. Character expressions occasionally change between a few different presets and the character artist has done a great job of matching the characters to their personalities and voices. (Or is it the other way around?) The R18+ patch includes an animated scene, which is actually rather well animated for a VN. Be aware, though, that it is mosaic censored.

Backgrounds are nicely drawn, but as in keeping with what is typical for the genre, they’re always devoid of people. Given the localised area in which the story takes place you’ll see them repeated a number of times, too.

I haven’t looked into the question of which VN engine is used in 9-Nine, but it is full-featured and works perfectly, offering a large number of text and audio customisation options, and everything you’d expect from a modern visual novel, including fast skip, text history, quick saves, etc. There’s also a gallery section including CG images and videos, which are unlocked as you play. 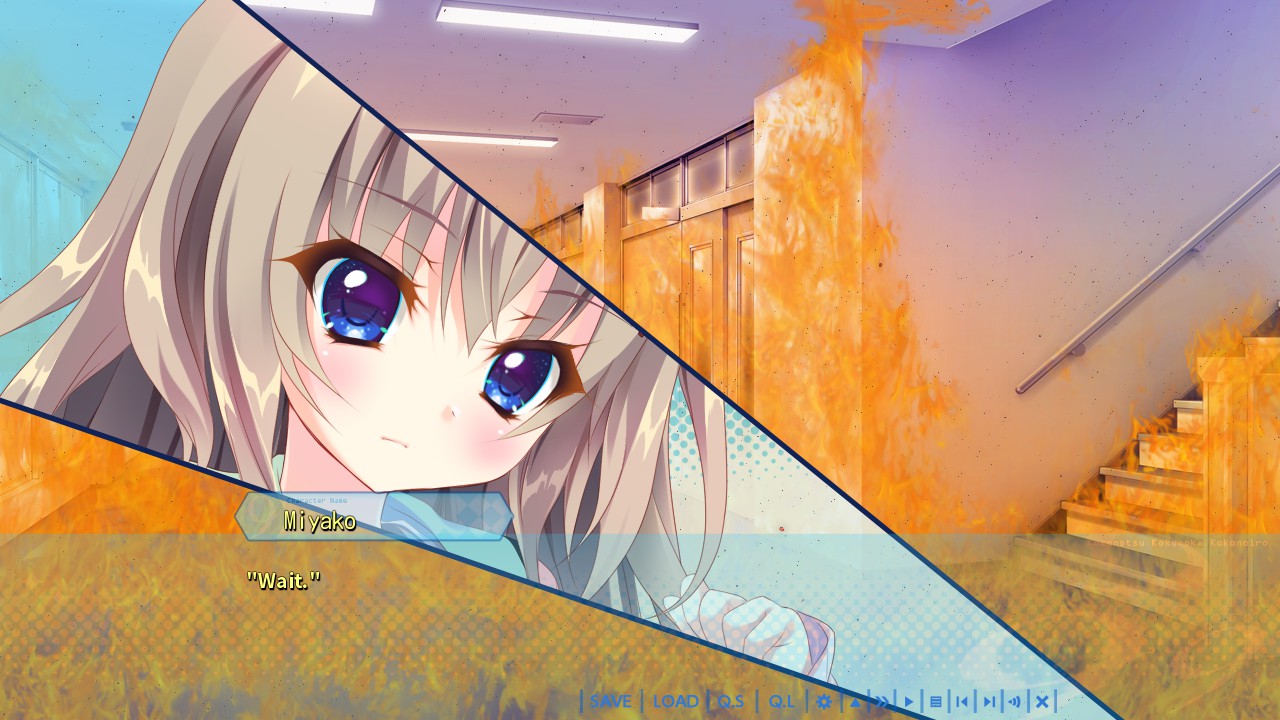 The game’s primary characters are fully spoken in Japanese — I’ve no idea of the accuracy of the script when compared to the spoken words — and in a departure from the norm, this includes the protagonist, Kakeru. Most (all?) of the game’s menu options are voiced as well, which is a nice touch.

There are few sound effects and a typical anime VN-style musical score, which I found a bit repetitive at times; though there seems to be a reasonably large number of tracks, they tend to transition suddenly based on the text, and many are repeated over and over. 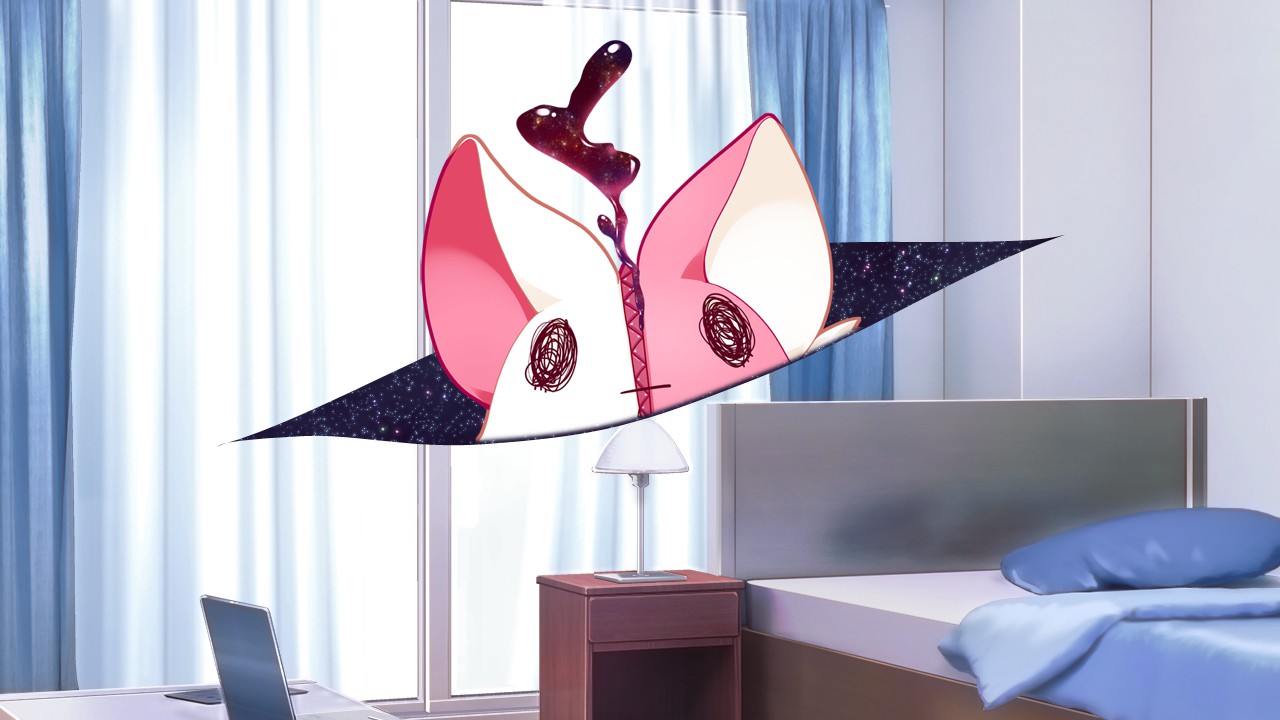 There’s nothing different about 9-Nine’s core gameplay when compared to basically any other visual novel. You’re presented with the story a line or two a time and you click or press a key to advance, or use the auto-play feature. The game includes some choices, though you won’t encounter any for the first couple of hours of reading, leading to two different resolutions: a Good Ending and a Bad Ending. The game’s use of multiple endings is interesting, but I don’t want to say anything more for fear of spoiling it.

Even with multiple endings, however, the game’s play/read time is quite short for the price. I reached the first ending in about three hours and had fully completed the game, including all achievements and the optional R18+ patch’s extra scene, in about double that. The story is interesting enough to keep the pace going throughout, though I imagine most players will use the fast skip feature heavily after playing through the first time. 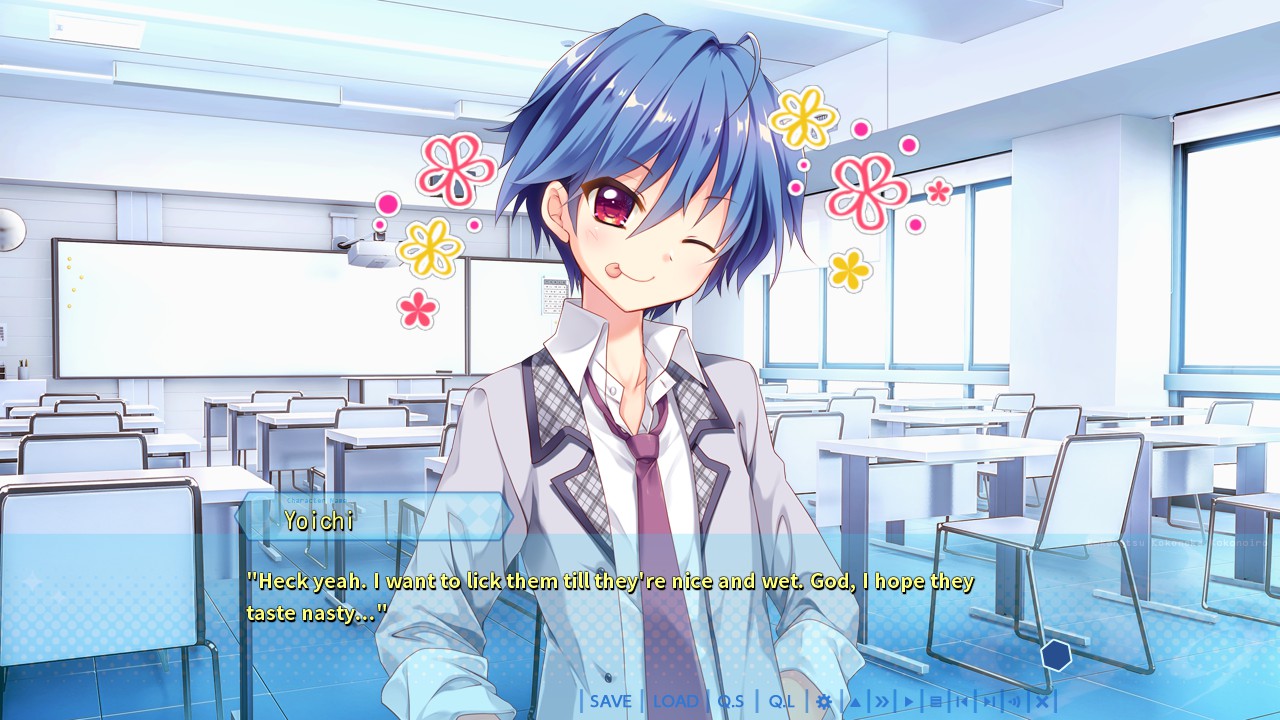 The script is exceptionally well written and translated, as one might expect for a Sekai Project – published game these days, and the writers have a good sense of humour. I laughed out loud a few times, mainly in the scenes with Kakeru’s somewhat sexually obsessed friend, though Sophitia the talking plushie was good fun, too. The R18+ patch’s extra scene is … let’s just say, typical of the genre. While the grammar is fine, it’s a bit crass; certainly not as thoughtfully written as Highway Blossoms’ sex scenes, for example. Then again, this is written from Kakeru’s point of view, so maybe it’s appropriate.

There’s nothing much to complain about with 9-Nine. I did get a bit annoyed at Kakeru, particularly in my first read through, and I can’t imagine ever meeting anyone quite as perfect as Miyako in real life, but that’s fine; that’s one reason to read/play these things after all, right? 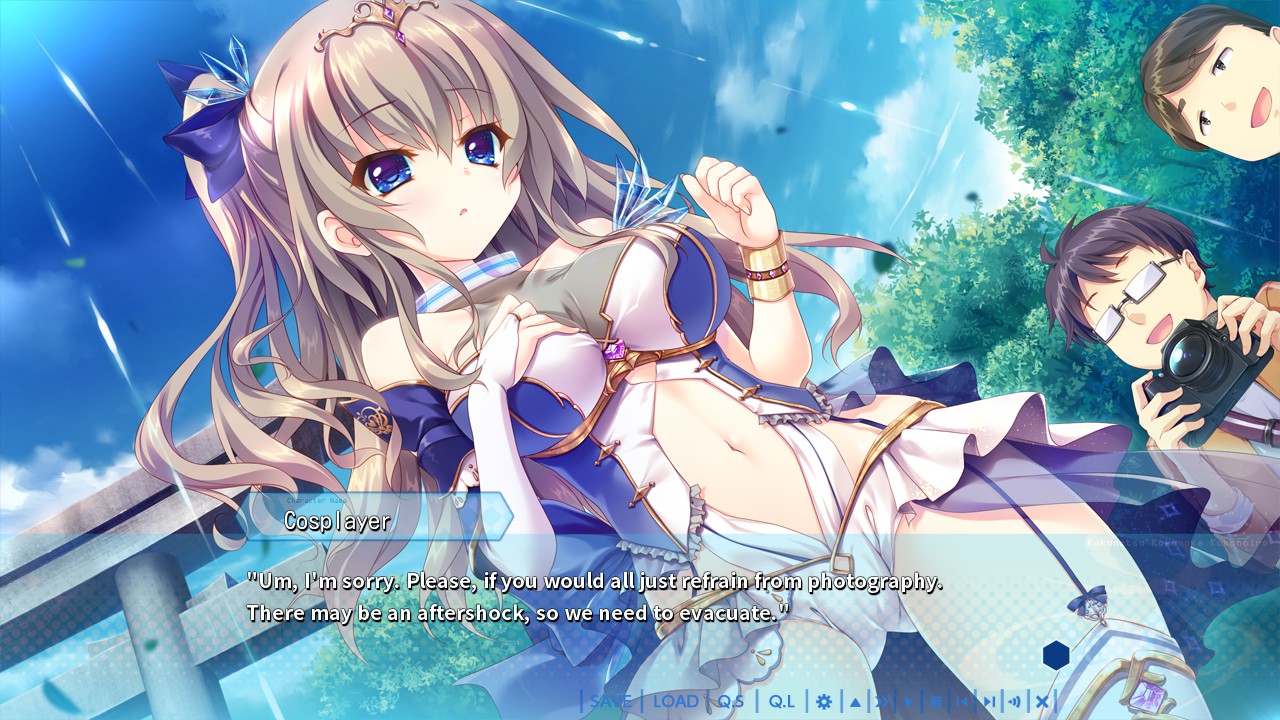 9-Nine: Episode 1 is another great visual novel from the folks at Sekai Project. It’s a bit short for the asking price, but the story is interesting, the art is beautiful, and the script is excellent.

I’m not intimately familiar with PALETTE’s other work, but I’ll keep an eye out for it now, along with the rest of the 9-Nine series. I hope we see more of Miyako Kujo!