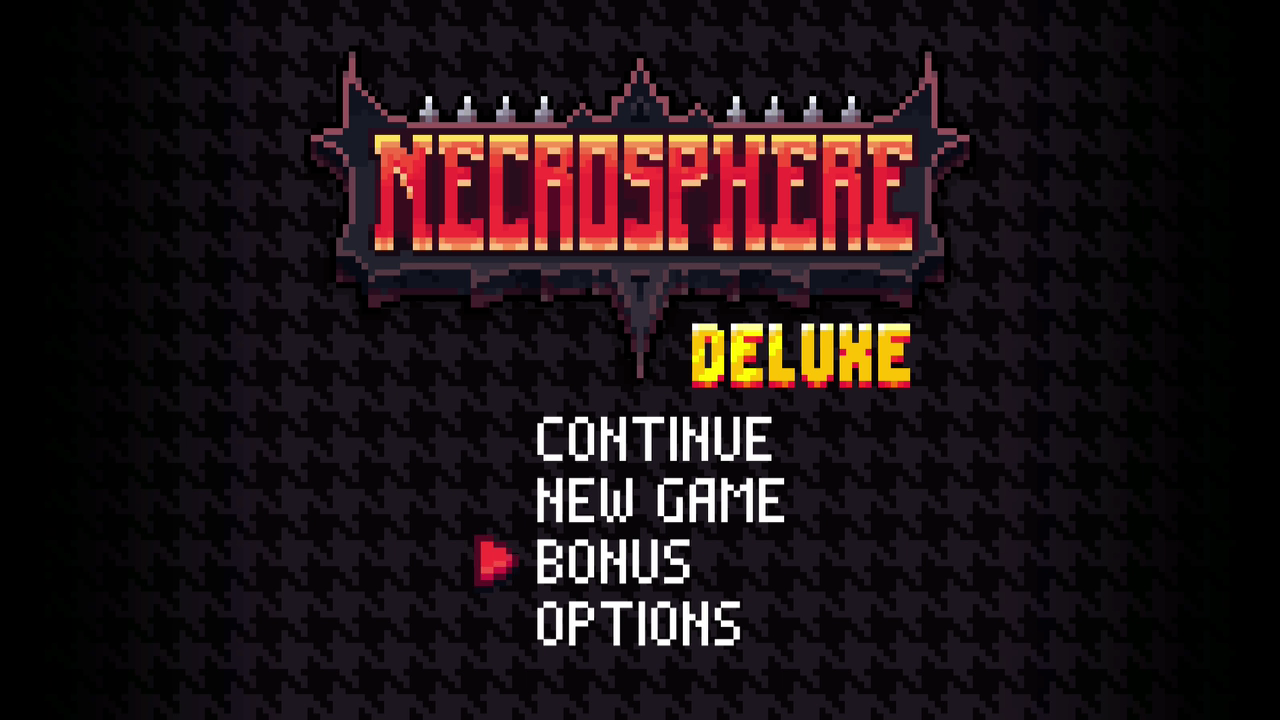 Yes, it’s real. There are only two buttons in this game. On paper it sounds easy but don’t be fooled, this game is a real finger twister. Coming hot off the other compact Metroidvania JackQuest, this one is turning the heat up even more.

Disclaimer: The Terry Cooper in this review is a work of fiction upon the fictional character from the game for entertainment purposes.

The first Hour of Necrosphere Deluxe:

Story: You Died. Welcome to the Necrosphere. 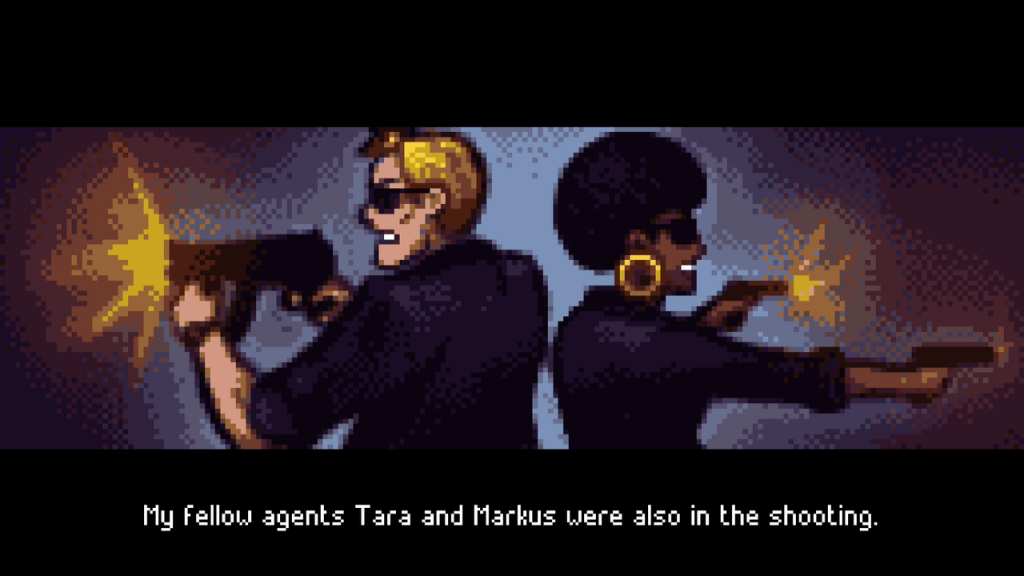 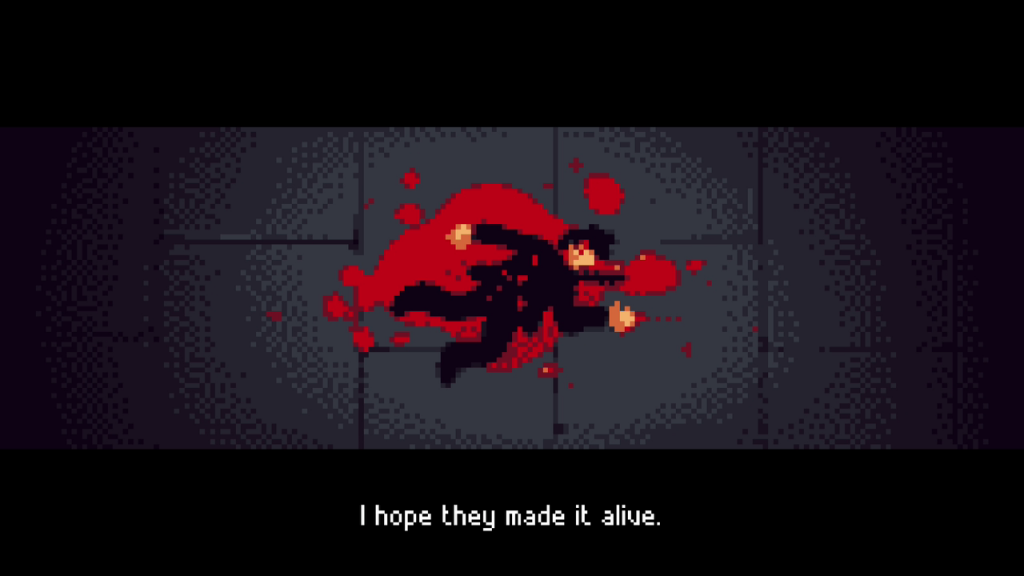 Blood. The pungent smell of death. I feel cold, can’t move, can’t see, feel tired. How did it come to this?
My name is Terry Cooper and I’m an Agent.
The only thing I know is… I got shot in the face and I’m on my way to the afterlife. Hopefully, M and T are ok. *faints*
I died and this is where my journey begins. A personal hell of moving left and right to find my way back to the living, the Normalsphere.

All I see right now, though, is the Necrosphere: a desolate maze the size of earth. Scattered through it are four portals. Three of them return me to my starting point and a single one is my ticket back home. I know I can’t make it like this. Luckily, my buddies are ok and have got me covered. They’ve left me with some memos that help me jog my memory and some secret gadgets to get out of here. A Sp *acho*, a Ga*acho* and a J*cough*. Yes, that’s should be more than enough to escape this rotten place.

The Necrosphere thinks it has me in it’s Cat Nigiri paws. What it doesn’t know is that I’m not trapped in it. It is trapped in here with me… 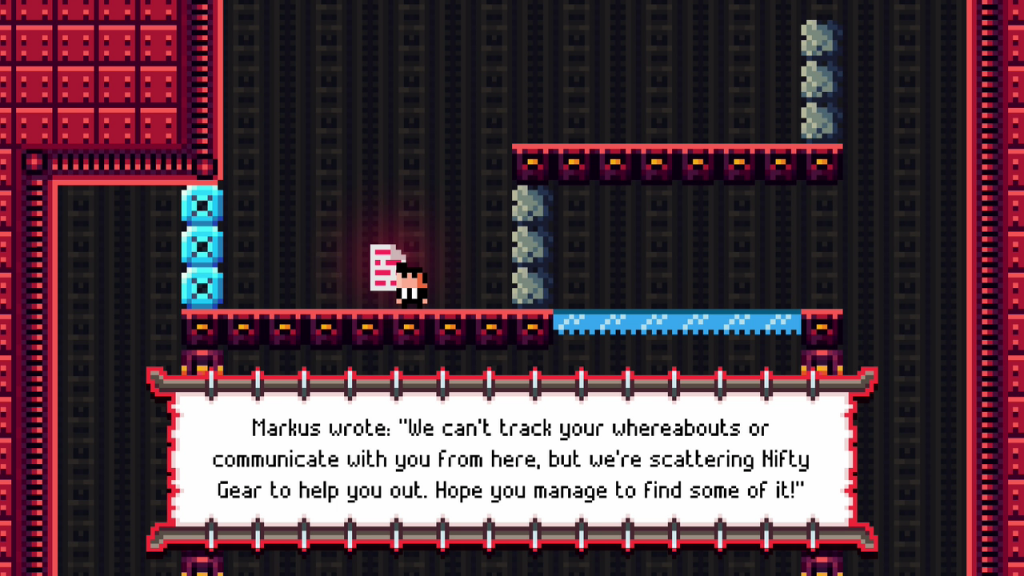 Which fool told them to spread out the gadgets? It makes no sense! Now I have to walk my way through this whole cursed place/maze while trying to find and collect everything to return. I can’t even jump! All I can do move left or right. At least my favorite suit has accompanied me to this dance.

Whoever designed this place is someone who should never design a house. There are so many doors hindering my righteous quest to the Normalsphere.

Normal automatic blue doors, annoying red doors tied to a switch. My absolute top contender for rage inducement is no other than the yellow doors that are only open for a limited time. First, you’re impeding my progress and now you expect me to be quick? What is this? A Game Show?
Another one evades my photographic memory. 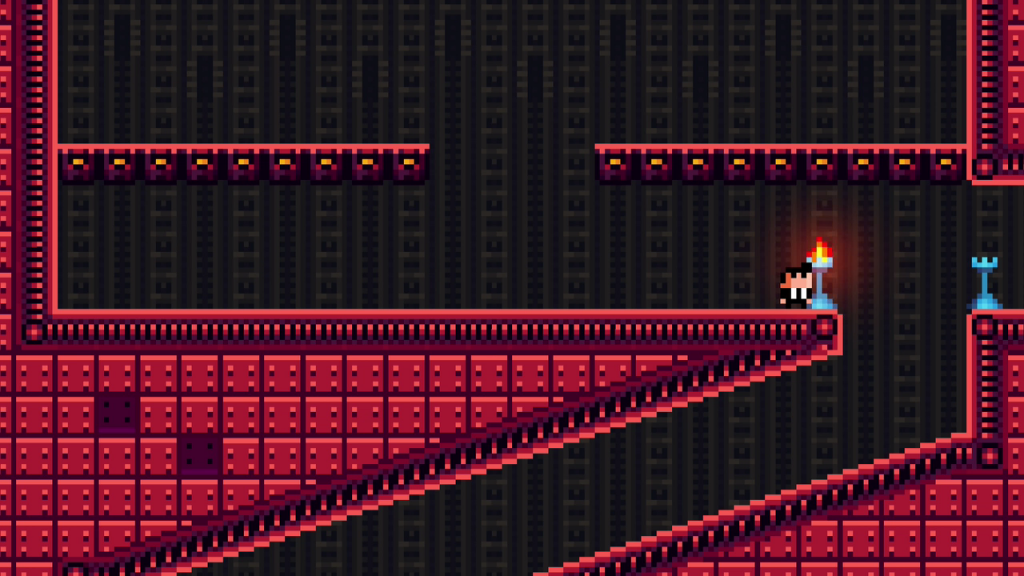 It’s a confusing maze. As Lady Luck has wanted there are torches along the way that can be lit up to show that I Came, I Saw and Conquered. There’s also a little bit of order here because each area has its own color scheme.

The brochure wasn’t lying when it said that this is no ordinary maze. It’s filled with loads of traps. Spikes, burning balls, moving burning balls, a burning ball that is chasing me and did I mention already… Spikes? Oh? What’s that?
That guy there looks handsome, like me. On second thought, he looks exactly like me but with an unhealthy tint of green. Time to greet him. Hey, what’s your…. *You are Dead*

I have just scientifically proven that they are indeed hostile. Time to ruuuuuuun! *Dodges Trap*

Look at that! It died by falling into the spikes. Ha! They’re not only as good looking as me, but they are also as vulnerable as yours truly! Phew!
I wish dodging them would be easy. My journey is ending up more difficult than I expected. 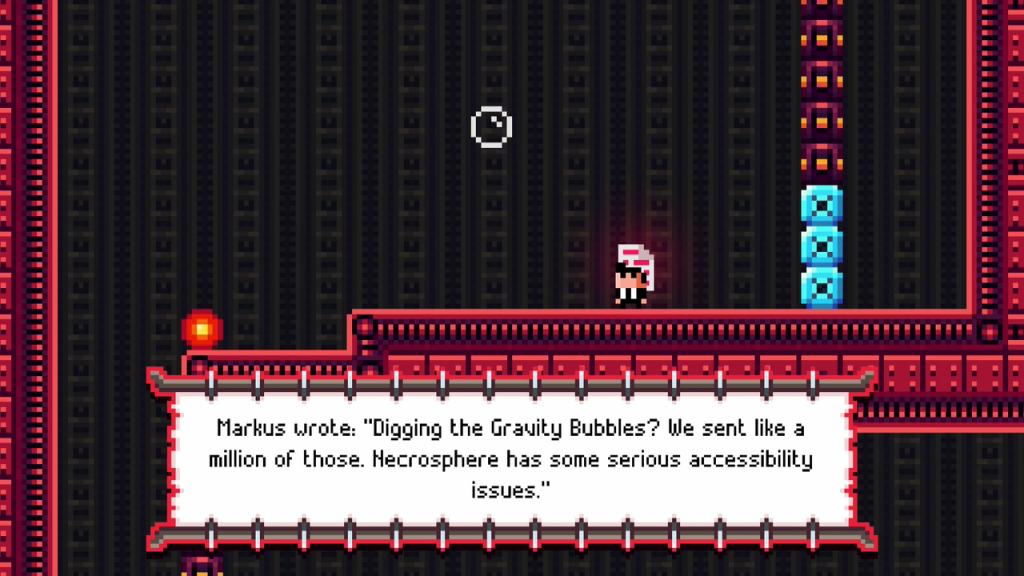 Gravity Bubbles! Small little helpers to get me across the Necrosphere. Stepping on them shoots me up in the air akin to jumping and I have to make sure that my control is impeccable otherwise a painful death awaits me with all those traps, a necessary evil due to the complex design of the Necrosphere. At first, it was a breeze. Now, one after another they come layered like a cake. I feel it. The closer I am to the Exit, the worse it gets.

Death is like a sadistic mistress here. Every step into a lethal trap sends me back to a checkpoint. I get stabbed, burned, touched over and over again. Am I in the wrong Movie? Is this Groundhog Day? It’s like an endless loop of dying and trying until I manage to pass the devilish traps. I will persevere. I will SURVIVE!

Too bad for you vile Necrosphere. You might stab me, burn me, humiliate me with each of my failures but you will never manage to touch my DIGNI… What did I do to deserve this? A PINK SPANDEX Ballet Suit?! Gotta take a deep breath and… wear it. *censored*

This thing is incredible. If it weren’t for that questionable design *sigh*. A power way beyond human capabilities, it lets me take a fast and long jump forward by stepping in the direction twice. I can even do it in the air! Moonwalking was yesterday. This thing is overpowered. *smirks* *sigh*
It’s now possible to get to places that were denied entrance. I wonder what else is awaiting me?

Oh wait, one of my buddies told me to collect his lost secret stash of 20 DVDs while I’m here. Geez, how can somebody lose AND scramble them all over the place?

*wheeze* Look there’s the fifth one. Ugh, getting tired… 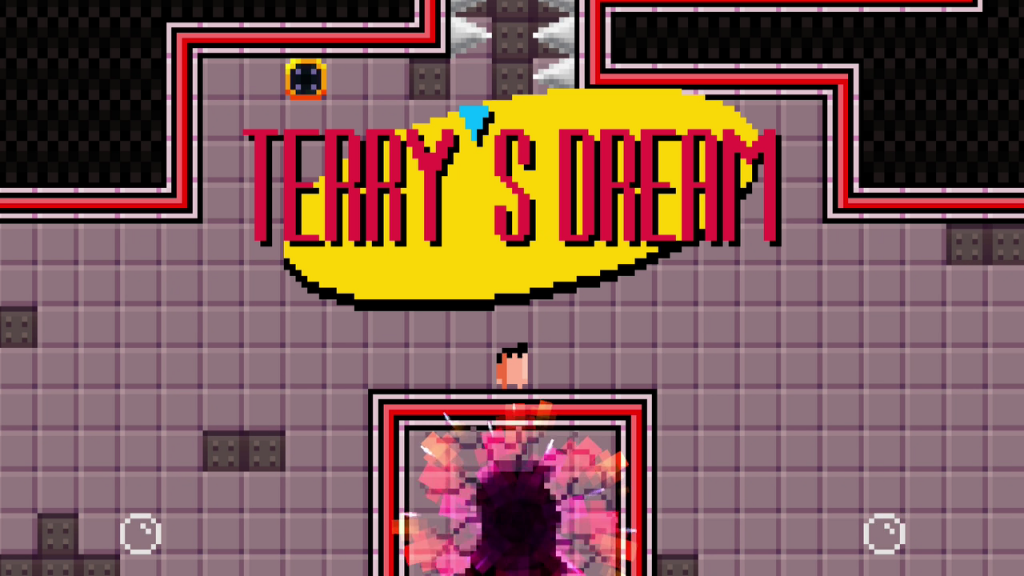 Wait, after five DVD’s something is unlocking!

I had a dream. A dream where I was naked. It’s a nightmare of disastrous proportions. More difficult than anything I have seen before. Not only do I have to get my gadgets back, but I also have to escape this dream.

Terry: Hey who’re you?
Reviewer: I’m the guy who controls you.

T: What? You’re the one responsible for all my deaths? What were you thinking?
R: Sorry, the controls were a little bit strange.

Terry: It’s just two buttons! Don’t you dare to come at me with excuses!
R: That’s true but instead of the typical left or right configuration it’s this: 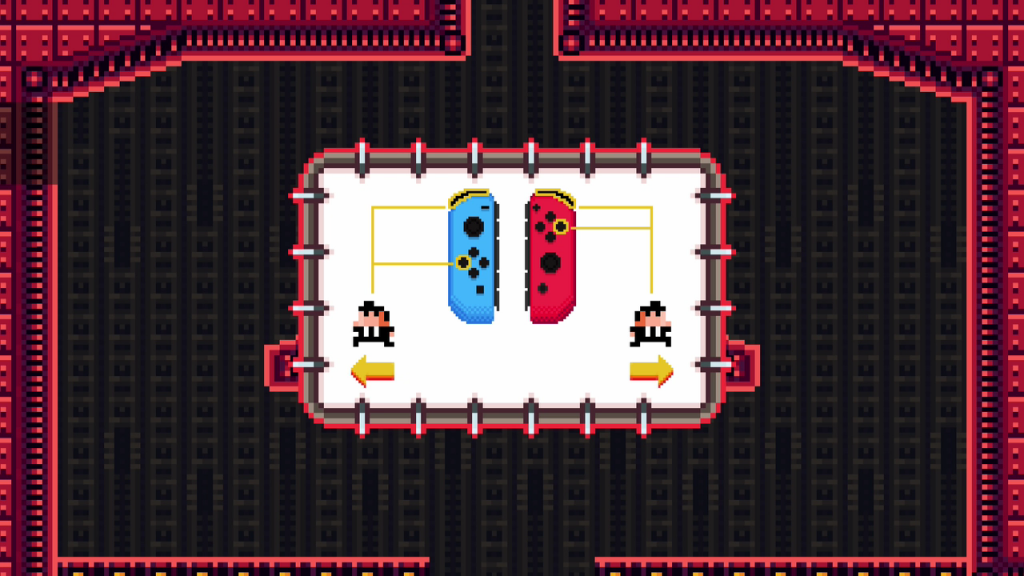 R: Double tapping and pushing/holding both buttons with precision is a huge challenge. I would even say it increases the difficulty of the game by design.
Terry: So are you saying it’s too difficult, despite me being the Main Character *glare intensifies and puts chin on hands*. Is this why I have to respawn so many times in each segment at the latter part of my journey?

R: *sweats* Indeed, at the beginning it was relatively smooth sailing. Then we got to the later part that was close to the end, it started to fall apart.
The narrow margin of error impeded the progress speed by a lot. Dare I even say it felt more frustrating than challenging due to feeling a lack of responsive controls (or scheme), turning it into a lucky draw of timing.

Terry: So what was your biggest problem with the controls?
R: The fact that this is a two-button game. Both buttons are double and triple assigned due to the extra moves. It becomes a real finger-twister by having to alternate double tapping with holding both buttons and so on.
If you want an example of how controls can impede your fun, this is a prime example of how it can make things more difficult and less intuitive. Add to that the multilayered traps with checkpoints that get further away and you begin to feel the frustration settling in.

Terry: I understand. You’re dismissed.
R: Thank you for understanding. By the way, why do you look like a pixelated sprite? *leaves*

Now that he mentioned it. If Pitfall and Mega Man had a baby I’m sure my current looks would be it. Just a looking at my hands give me pure nostalgia. Feels like I’m back in the 1980s where beautifully blocky pixels and a dash of low-resolution sprites allows imagination to do the majority of the work.

What’s that I’m hearing? Not only does it look nostalgic but also sounds like it. The sound of Chiptunes beeping and blooping in a good way. Though, some areas here have a subdued beat borderlining on boring. I wish there were lively ones that make my blood boil but that’s just me.

That’s all from me. The guy I grilled told me to leave you with his Verdict. Without further ado here it is. See ya!

Necrosphere is an attempt at a bite-sized Metroidvania with a high difficulty to compensate for the reduced size. The checkpoints are mostly fair and the game is designed around perfecting each trap. The Metroidvania isn’t much of a factor. Instead, Necrosphere Deluxe is more about being a challenging platformer over everything else.

My biggest gripe are the controls. I know it’s by design but that doesn’t mean I can’t criticize it. Just like how Tank controls take away fun for me.
It’s an enjoyable experience until I hit the later parts. The challenging and fun adventure turned sour and frustrating at about 80% progress. You could call it the final stretch. There were times I was stuck for like close to an hour at A SINGLE segment of platforming. This greatly bloated the playtime.

After heavy consideration, I’m still giving Necrosphere Deluxe a SAVE as long as you know what you’re getting into and you have no excuses since the game even mentions the difficulty in the description.