It’s a struggle to find a compelling reason to play Meeple Station in its current state.

Meeple Station is the second Steam game from Vox Games, developers of Regions of Ruin. It’s just released into Early Access on Steam; this review is based on recent pre-alpha and alpha versions made available in the days before the public release.

At the moment, Meeple Station is a simple colony simulation in which you manage a space station inhabited by meeples: basically human-looking pixel-graphic people. You build a simple space station from a very small collection of components, choose an area of the galaxy to begin, and start your game with four randomly assigned meeples under your influence. There’s no stated goal; like many colony sims I assume it’s simply to survive and grow.

The game is played from a 3/4 top-down isometric viewpoint and features some reasonably nice pixel graphics, which are lacking in detail in some cases. Colours are used well for different materials and selectors, and the background starscape during normal play looks lovely. In earlier builds the camera was pretty zippy with a good zoom range, too, but it seems like the latest build at the time of writing this review has killed mouse wheel zoom; I hope it will return soon. 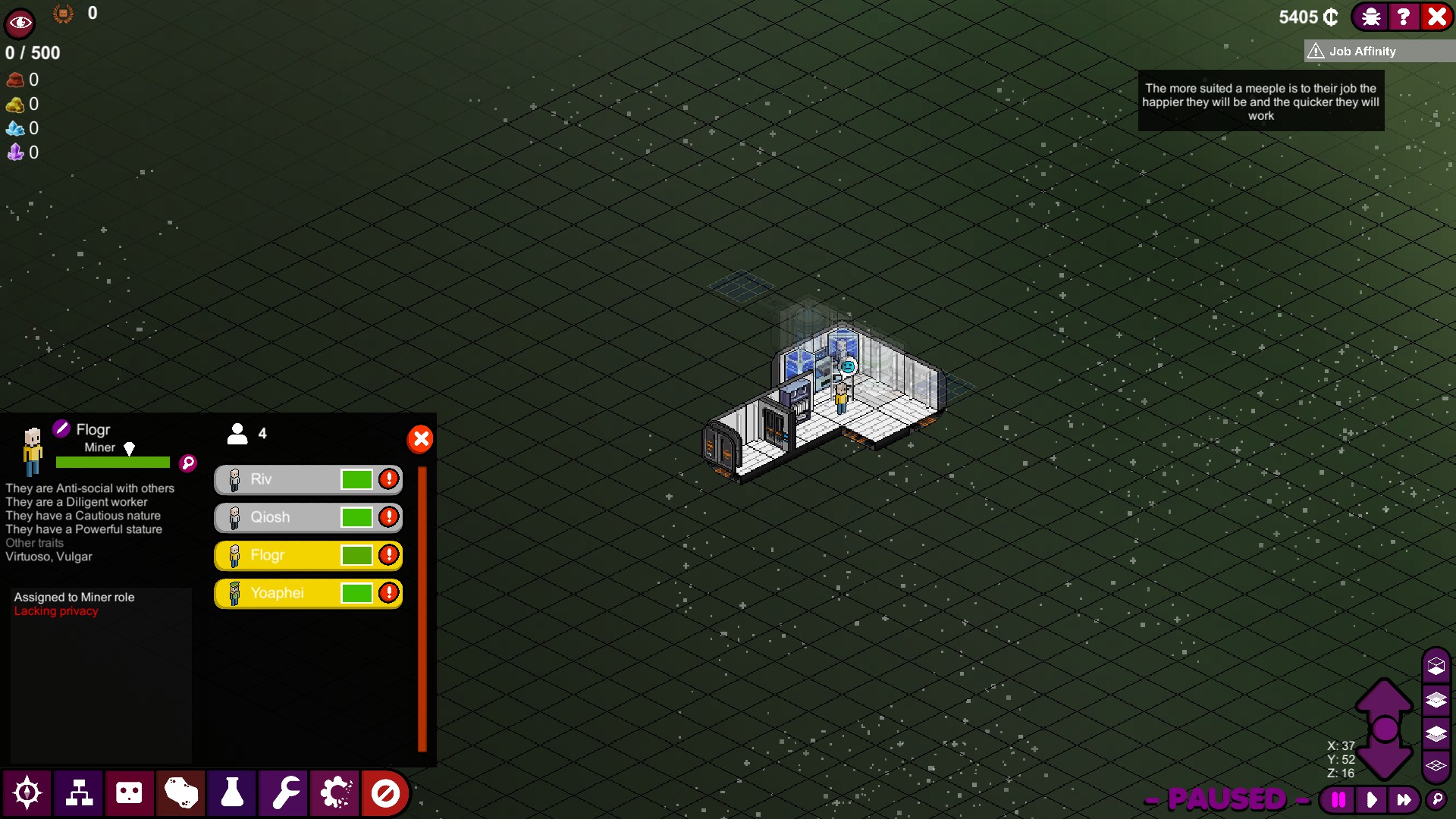 The interface provides very little in the way of useful direction or information, however, with few tooltips, some ugly icons, and the main play area being represented by a large number of X-COM-like layers, with which I became very frustrated. To make matters worse, the default key mapping for moving through these layers seems to me like it’s inverted, though you can at least change it. And to make them even worse still, there’s no way to rotate the view! This becomes a big issue once you have anything more than the most rudimentary station, as you’ll have to place or select items behind others. It’s also very easy to do something you didn’t mean to do, wasting precious resources and time.

There’s no tutorial; no introduction; a pitiful in-game help “wiki” (it’s not actually a wiki); some not-very helpful, but very repetitive alerts; and very little of use to get you started in working out what you’re supposed to do. There’s also some “attitude” in the UI, which is moderately funny to begin with, but quickly becomes grating when things aren’t working properly; and some poor grammar, which is moderately funny, but probably isn’t supposed to be.

Music is beautiful and fits the game perfectly. It’s melodic and “spacey” and just … excellent! Sound effects are much more basic, but they do the job. Meeples seem to speak a sort of Simish, but there’s little variation in their voices, which quickly become boring.

Performance is surprisingly bad considering the relatively simple graphics. I’ve encountered several short freezes on a laptop that far exceeds the recommended specifications for the game. 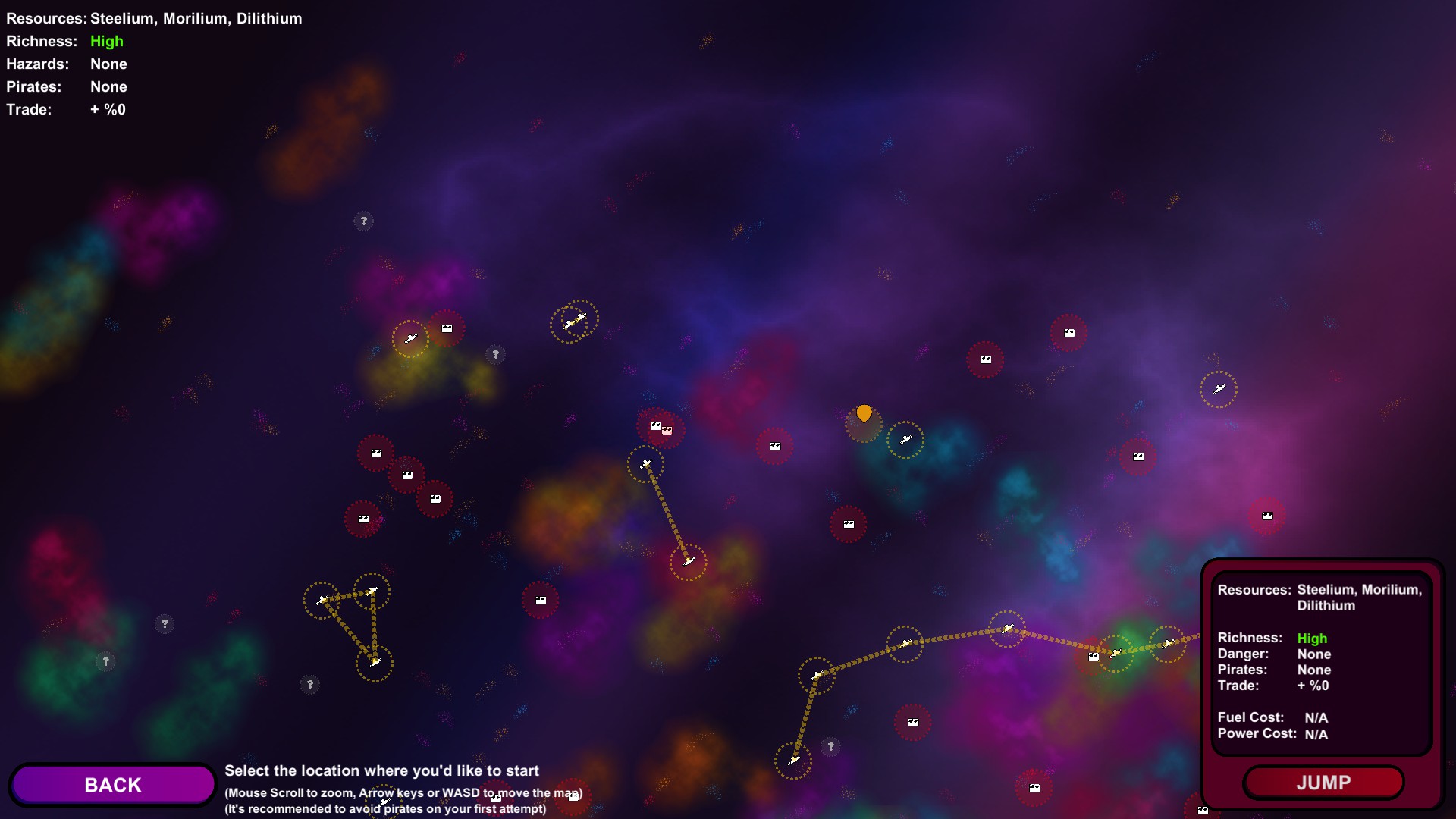 Not knowing exactly what I was supposed to be doing, but having played a number of similar sorts of games, I first started with one of the five pre-made stations (available through two different interface buttons, for some reason). Then I was prompted to choose a starting location from a very colourful galactic map with an overlay showing various unexplained icons; I picked somewhere purple that said it had some resources. This spawned my station in what I assume was a procedurally generated small section of space, complete with a couple of nearby asteroids of different colours.

Following the brief alert-style instructions provided, I assigned a captain and gave jobs to my other meeples. My janitor immediately started wandering about chatting to other meeples, while my refiner sat down to eat at a nearby table and my miner donned his space suit and zig-zagged in his weird way to start mining the asteroid that I’d nominated. As the raw materials started flowing I created some refinery tickets and my refiner started work. Life seemed good. 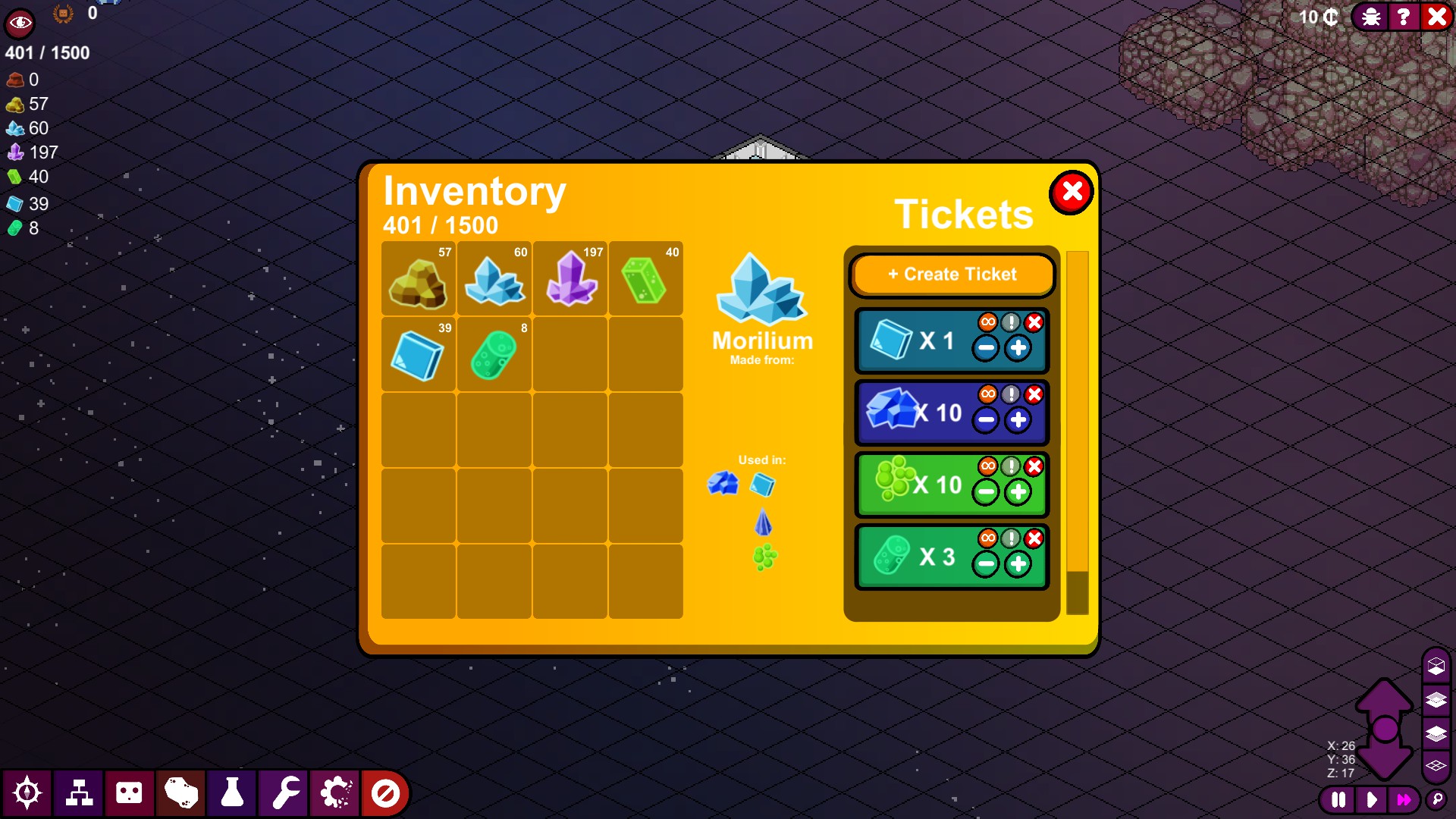 As with most games of this type, you don’t directly control your people (er, meeples); you allocate them to roles and they go about their business. There’s an interesting social interaction system that seems similar to RimWorld’s on the surface, but as with most of the game’s current functionality, it’s a bit wonky. The game alerts you (through two different interface elements, again) about abnormal situations, such as pathing, resourcing, or social interaction issue, for example, and it’s your job to fix these things. Only, in the game’s current state many of them are unfixable.

Pathing is fairly broken, for example. “Such-and-such dropped task” is a common message, but the reason for the task being dropped is often invalid. Miners might refuse to use an airlock, but deselecting and reselecting asteroids might trigger a re-evaluation. I often see alerts about no seats being available for eating when I have half a dozen of the bloody things sitting there vacant. Refiners often stop refining even with high-priority tickets sitting there, and won’t start again until you reassign them or clear the refining queue entirely. And what is with the ticket ordering — it seems to be random! The endless alerts about social interaction and depression — inevitable if you have a depressive meeple — are annoying. And what is the relevance of “BlahBlah issued an order”; should I be worried? 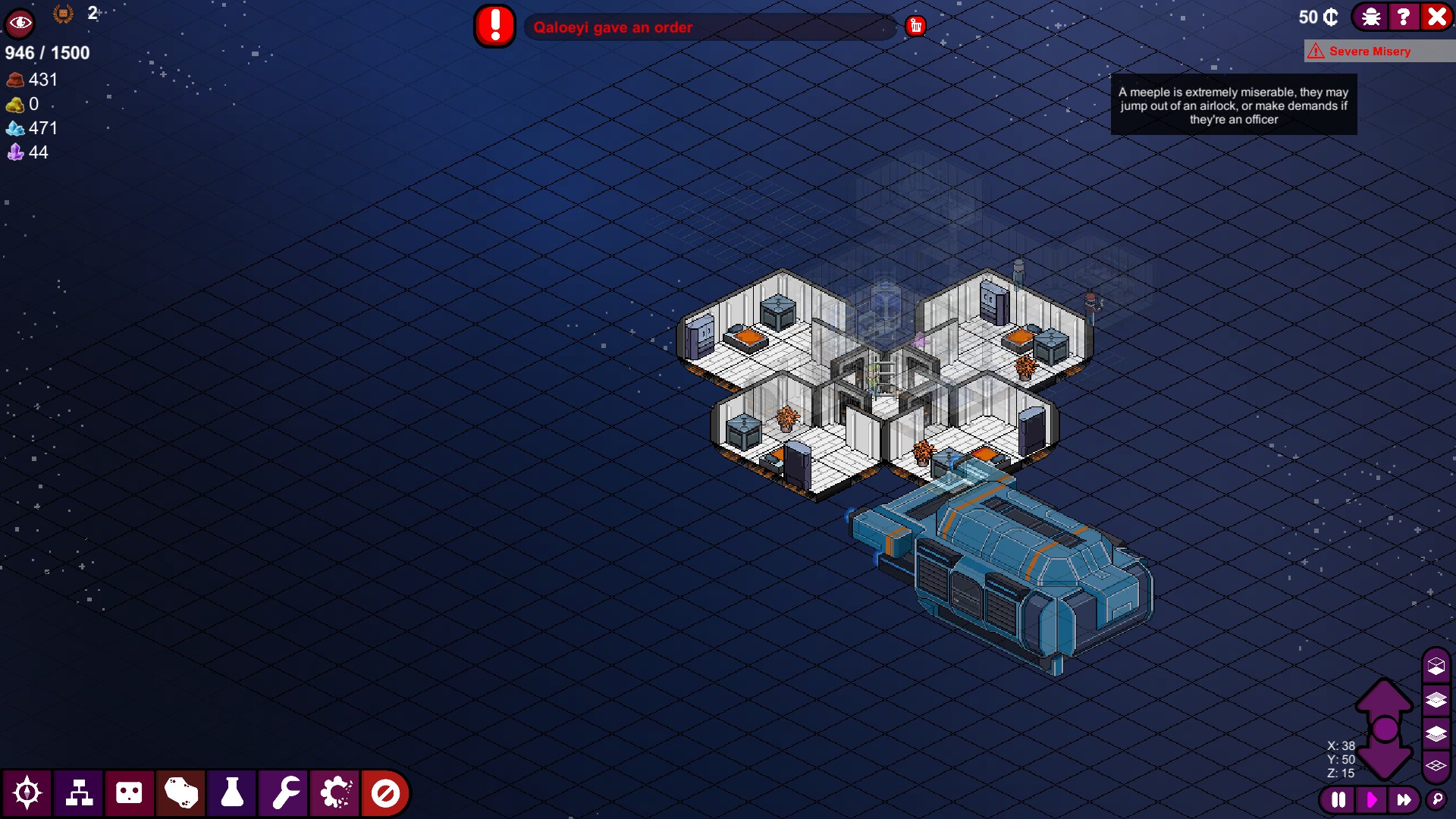 Anyway, after playing with the starting station for a bit, for various reasons I had to start again a few times and tried making my own station. The station builder provides a basic sort of checklist for this — you need things like power and oxygen, for example — but the interface issues already mentioned and the general lack of information means that you’ll probably go through a few iterations before you hit on a starting design that you can afford and with which you’re moderately happy. This has the side effect of letting you see a few more procedurally generated meeples, each of which comes with a number of traits that can have lasting effects on your game. I’d recommend restarting any game in which you get a clumsy meeple; they can all but destroy your station before you can get started! 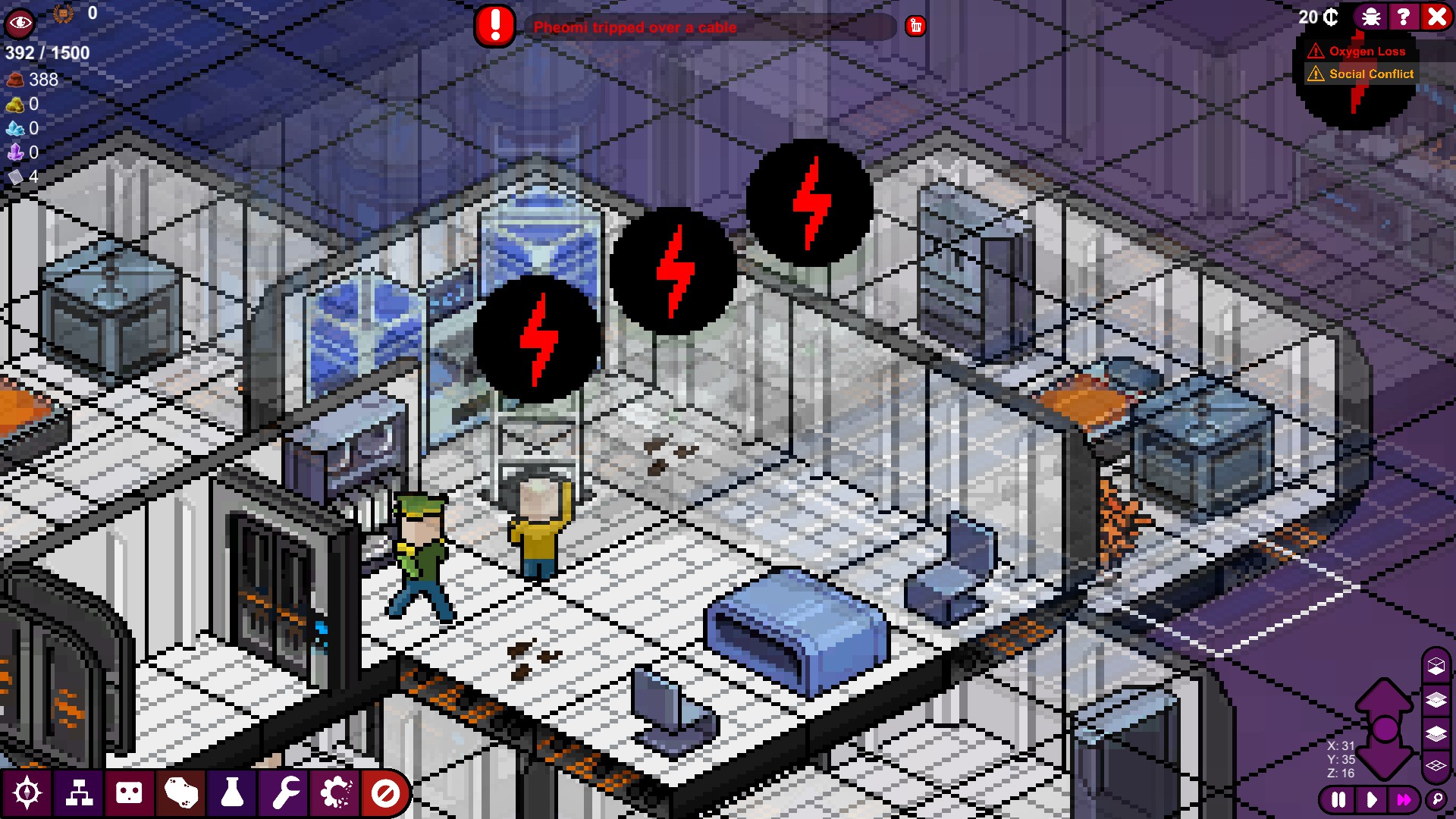 What I discovered during this whole iterative process is that there’s actually not much to do yet. You can mine and trade and build more of the starting components — and if you can work out how, then you can research some new technologies — but it’s all fairly limited in scope so far. A lot of options aren’t yet implemented, with some greyed-out or unselectable options and TBA-style messages. That’s fine for a game just entering EA, for sure, but it’s something to consider when deciding whether the game is a worthwhile purchase right now.

Other issues I encountered were many and varied and there’s probably not much point listing them all here; given the developers aren’t some fly-by-night mob, I have faith that they’ll keep at it. But it’s probably worth fixing the bug reporter sooner rather than later! 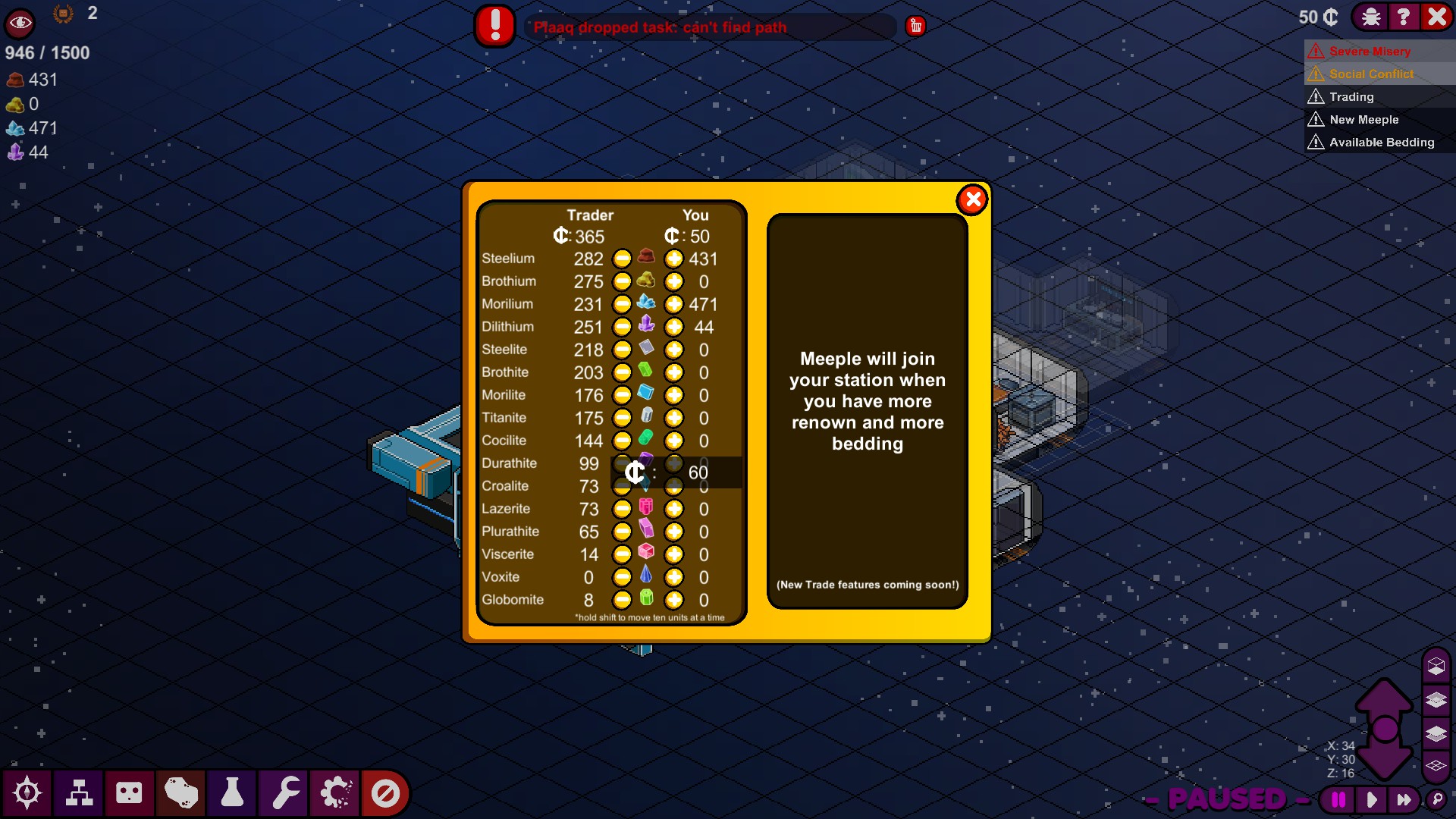 While Meeple Station shows promise and I’d love to be able to recommend it, in its current state I just can’t. I think it’s been released into Early Access too early, with myriad bugs both large and small, a terribly wonky interface, little content, and nowhere near enough information provided to understand the game.

I’m sure it will get a lot better, but for now it’s probably best to hold off until it’s a lot more stable, less finicky, and more flush with stuff to do. With the developers stating influences from RimWorld and Dwarf Fortress, I assume the game will become more compelling as it moves through EA, but at the moment there’s not a lot here for the asking price, and I’ve simply not found it much fun to play.