Gungrave has risen again after a decade of resting and this time it’s in VR. However, will it leave a mark in VR space?

Gungrave was a cross media project that has gotten an anime and two PS2 games: Gungrave and Gungrave OD. The last game was a budget release and came with three characters. After a decade of dormancy, Gungrave is back in VR and split into two budget priced games. Let’s find out what both are bringing to the plate. 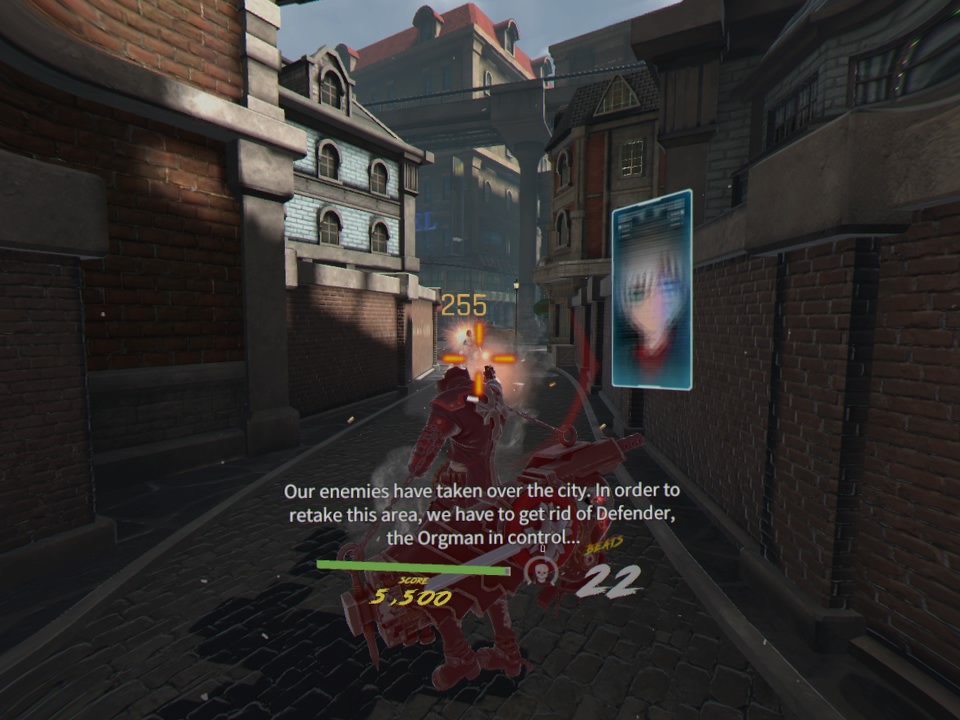 SEED is a drug that turns the dead and the living into supernatural monsters. The fight against this drug never stopped and continues to this day.

Gungrave VR is really light on story content and I have seen no story snippets within the whole game. It’s more like an Arcade game where you go from one stage to another without any story sequences to glue each stage together. 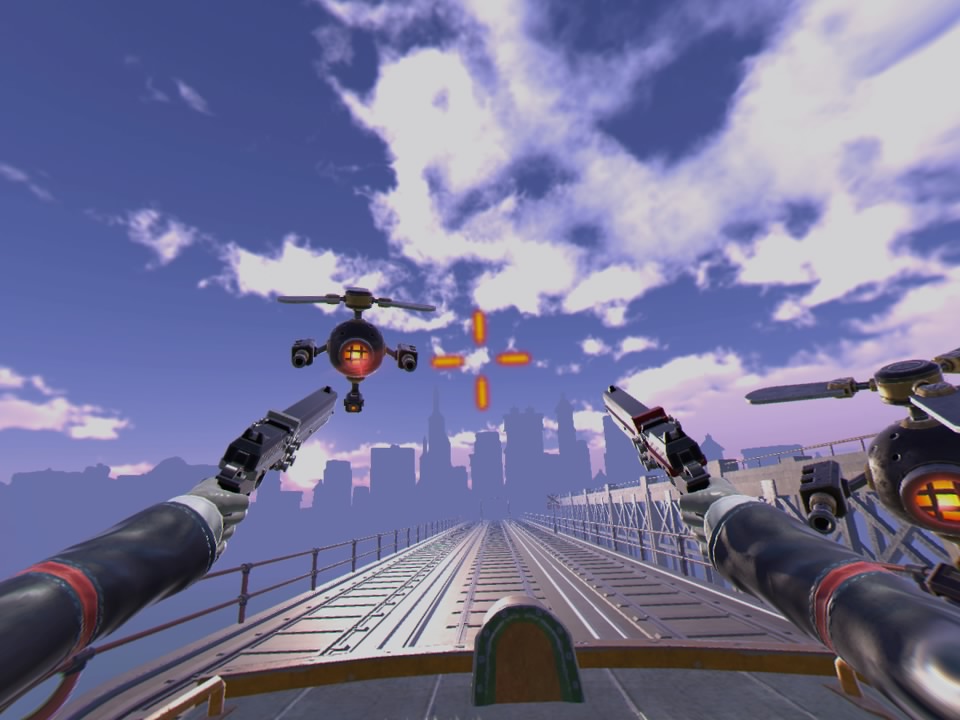 There are two gameplay styles. The first one is more akin to the original games. You can move around normally and dodge with sideway jumps in a third person view. There is no verticality involved. You play the game with the standard DS4 Controller and the aiming is utilizing your head movement. Camera movement is done in steps rather than a fluid movement to reduce the chances of nausea.

Shooting is your main attack and you have unlimited ammo, also, while it’s possible to move and attack, your movement speed becomes slower. Beware though, as your guns can overheat and it’s a good idea to cool them down partially at the push of a button. When things get too fast or messy you can activate Reaper Time and slow everything down for up to 3 seconds. You are able to use it quite freely because it recharges fast.

Shooting and dodging might be your focus but you’re not that vulnerable up close either. Grave can swing his coffin for a small AoE attack that can also send projectiles such as rockets back to their senders.

To bring a little bit of a change of pace, there are also stages in First Person View where it’s basically the same but you don’t need to move at all, just like an On-Rails Shooter.

By attacking enemies, you will rack up so-called beats that can stack up to 300. Once you have built up 100, two devastating moves become available at the price of 100 beats. One is a strong stationary machine gun attack that can be interfered by strong attacks; the other is an invincible move with an AoE around himself kind of like a super version of his melee attack.

In comparison, fans of the classic games will find here a lighter experience. The movement feels somewhat slow and the evasion movements have either no invincibility or only do for a short time. The shooting itself feels fine and aiming is really easy and effective using the VR Headset.

The maps are mostly open places like plazas or rooftops, making it a tad bland and lacking in variety. Enemy variety is better in that regard. The game likes to throw diverse cocktails of enemies at you the further you go. To nobody’s surprise, there are also boss battles. Unfortunately, I didn’t feel them. Most of them are big, husky and damage sponges. It’s also, where the limiting factors of the game’s VR inclusion comes the most into play. In the normal stages, it’s easy to just keep looking forward and occasionally fixing the camera angle so it becomes more like a shooting gallery. The full range of movement is required. The most tedious task is to make a 180 turn because there is no quick option for that and you have to make the turn step by step.

My first Gungrave VR playthrough on normal took me about 1-2 hours, including the tutorial. Unfortunately, after finishing the last available mission, the game greeted me with a simple text box on the bottom side that told me that it was the end of the game and that it continues with Gungrave VR U.N.. Yes, there was no special story sequence, nor a special picture or anything at all to wet your appetite for the follow up part.

Not much has changed from the formula of Gungrave VR. The biggest change is the introduction of 2D sidescroller action. The aiming utilizes VR Headset just like always, but it can be a little bit chaotic because neither sides are safe from enemies. They pop up at will and it’s your job to fend them off. Movement is the same as TPS while you are only able to move to the left or right. The majority of enemies are brand new and have their own pattern of attacks, and bosses are of course also sparkling new. 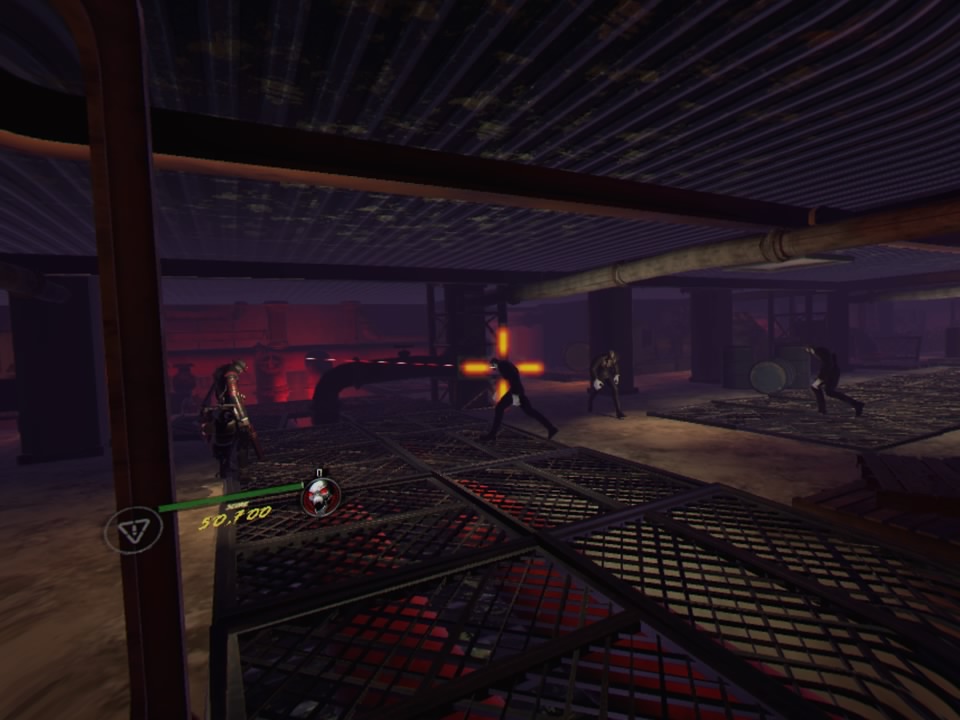 The TPS gameplay is the same as in Gungrave VR. The difference is that the location is limited to a factory and offers more destructibility. There were also some strange parts in terms of design. For one, there is one stage where opponents spawn behind you at the final part, resulting in an awkward situation that didn’t happen before. Either forcing you to reposition, looking behind frequently or changing your view in a slow way.

Another strange part was a small elevator where movement is extremely limited. There’s also this occasion where invincible enemies would be jumping off the aircraft until the actual drop of its passengers. The place is so limited that it feels like they are in your face in 1 or 2 steps. Both occurrences only happen once though.

The new 2D sidescroller segments do not offer that much because it’s kept extremely simple. There is no verticality or anything to disrupt the standard flow. You move to the right and destroy everything in your way. At some points, you don’t even have to move along the stage and just have to fend them off. A small caveat I have with the 2D part is that enemies can appear from the fore or background and are invincible up to a certain point. Your bullets can hit them but they don’t do anything until that invincibility wears off. It comes to me as a very strange design decision.

Boss fights are again part of the mission package and also come in TPS or 2D. Instead of drawn pictures after finishing a mission, we get run-the-mill Grave posing depending on the grade.

Spoiler Length: Gungrave VR U.N is even shorter than the prior part. My playthrough in normal difficulty only took less than an hour, excluding the tutorial.

It becomes very clear that Gungrave VR and U.N. are Arcade like score based shooters where you are going to focus on playing through different difficulties to score higher ranks. Both games can be considered short if you are only interested in finishing the game.

Gungrave VR doesn’t look like a game that pushes the graphical envelope but that doesn’t really mean it looks bad either. It looks serviceable with just the right amount of details. The areas are relatively limited so there isn’t that much to see. The flashy finishing moves against bosses that were in the prior games sadly didn’t make the cut. It’s also strange that they removed drawn artworks in Gungrave VR U.N. Those who are looking for some slick story sequences will have to search elsewhere, as the only time you will see something close to that is at the end of Gungrave VR U.N..

The music falls in line with the graphics. It’s unremarkable but serves the action well enough and doesn’t take the main stage.

Gungrave VR feels like a very low budget game and the presentation is even worse than its PS2 predecessors outside of graphics. If anything, it feels like a failed attempt to jump on the VR train. While there are many games that have shown that VR can bring something new and fun, it does not manage to fulfill those criteria or even fill the relatively modest footsteps left behind by its predecessors. It turned a Gung-ho shooting frenzy game into a shooting gallery instead, or a lackluster 2D sidescroller, thus missing quite a bit of the original IPs established gameplay identity. It’s an interesting attempt, but one that sadly falls flat. At this moment, I would recommend waiting for a price drop first, before taking the jump.