A beautiful, but rather short, anime visual novel about grief and love. The writing is superb.

I’ve been very gradually working my way through my ever-growing and ridiculous Steam backlog and Highway Blossoms caught my eye. It’s an anime-style kinetic visual novel from a couple of years ago by newcomers, AlienWorks, published by the legendary Sekai Project.

Highway Blossoms tells the story of Amber, a young woman taking a trip in an old campervan through the American Midwest after her only loved one, her grandfather, recently passed away. She’s sad and a little lonely, listening to his old favourite cassette tapes (does anyone even remember what they are these days?) as she drives relatively aimlessly across the country, her only destination a music festival in California in a couple of weeks’ time.

By chance she meets Marina, a somewhat ditzy, but very sweet and undeniably cute girl of similar age whose car has broken down on the side of the highway. Not wanting to leave Marina to the whims of the area’s unknown inhabitants, Amber offers to help her, and in so doing learns about a treasure hunt that has the public searching the region in droves for a gold miner’s long-lost wealth. The girls set off together in search of treasure and find more than they bargained for. 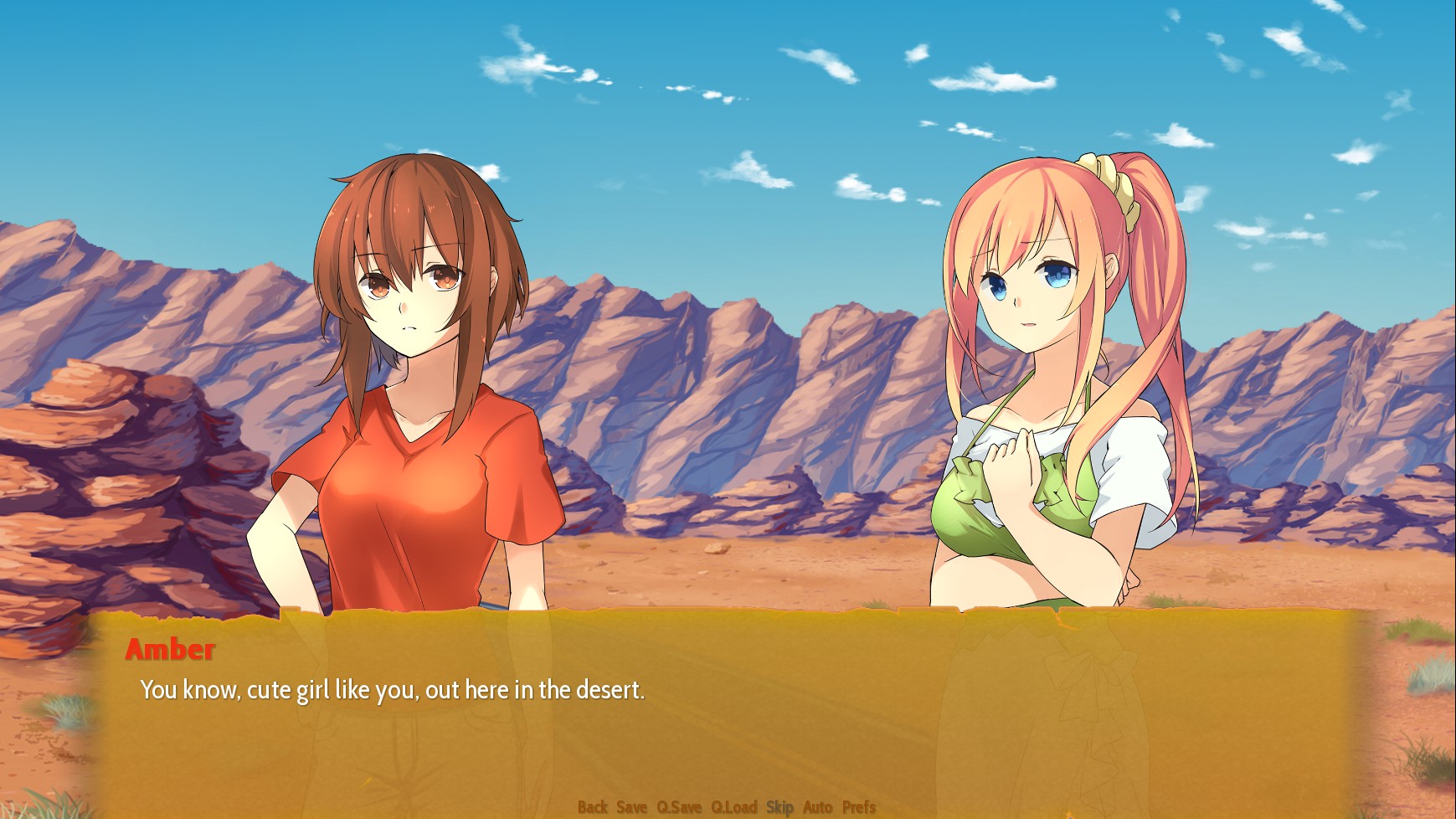 The game begins with a wonderfully animated introduction with an art style, ‘camera’ positioning, and imagery that caught my attention right from the start. Not much actually happens in it, simply showing the game’s short credits run over Amber cruising along the highway in a world of her own listening to her grandpa’s tapes, but it’s very well produced and it sets the scene perfectly.

I’m not sure what engine is used, though I believe it’s the common Ren’Py engine in some form. For the most part presentation is exactly what you’d expect from a visual novel: a semi-transparent text box that presents the story overlaid on a scene represented by a (normally still) background image and large 2D paper-doll style sprites for the main characters. The interface is pretty standard, though a bit lacking in some options; I couldn’t find a text history, for example, and wasn’t sure how to hide the text box.

Backgrounds are beautiful; some of the best I’ve seen in any visual novel. There’s a great range of interiors and impressive exteriors showing some of the wilderness in which the story is set. Character art is attractive and consistent, with multiple poses and expressions that aren’t over the top at all. Character animations are relatively limited, as is common for the genre, but still very nice. The engine is used to good effect to make the game feel more dynamic than many other visual novels. 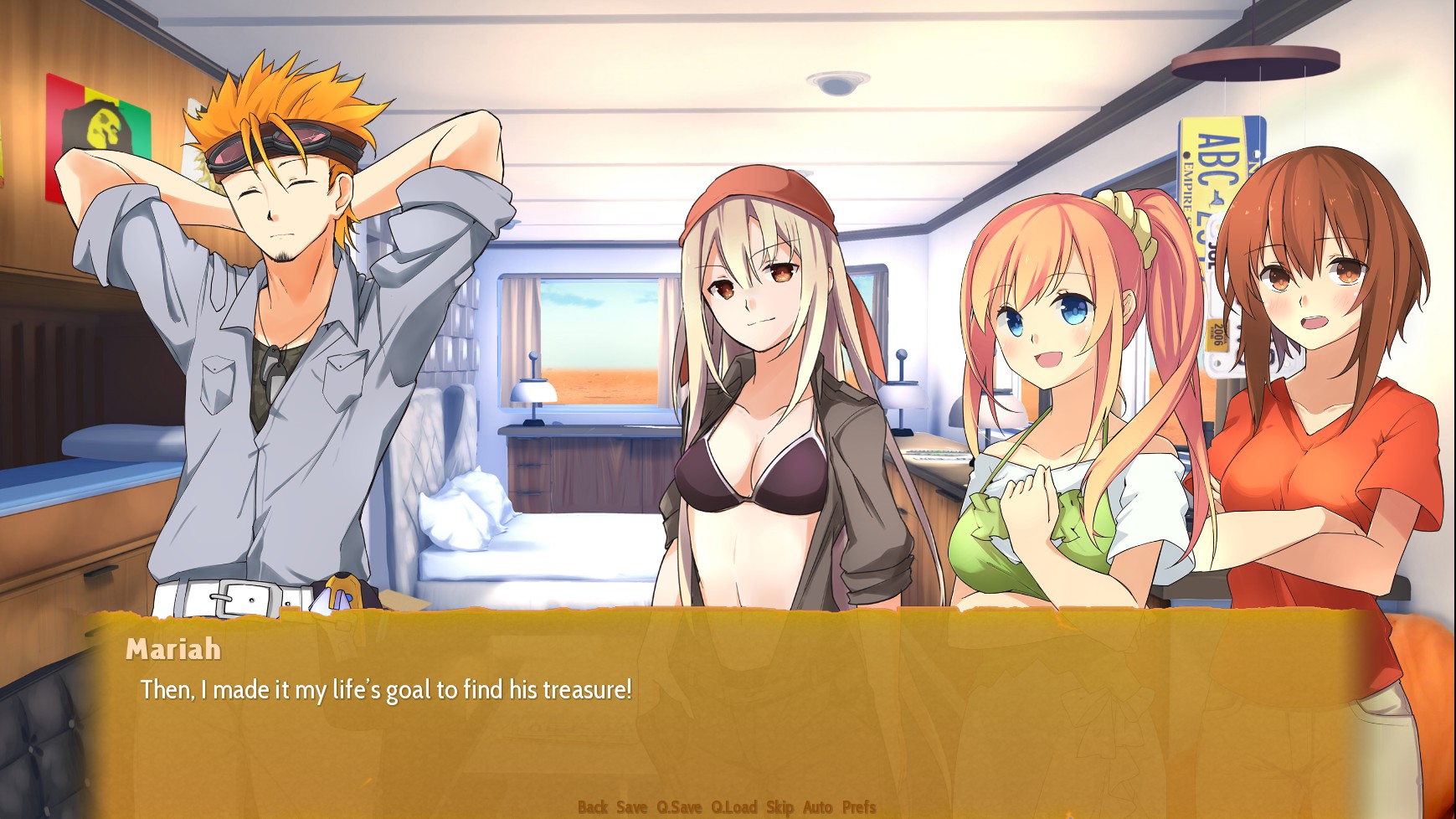 Sound effects tend to be a fairly limited medium in visual novels, and though there are some sound effects in various scenes in Highway Blossoms, they’re not really the focus here either. The music soundtrack is excellent, though, and actually one focus of the story. All of the dialogue is fully spoken in English, too, and it matches the written script exceedingly well. Quality is very good, though I thought a couple of the voices didn’t really seem to suit the characters with whom they were associated. Amber and Maria were particularly good, though, so anything else is secondary.

There are no graphics options to speak of, but none are required; this sort of game is unlikely to stress even the mouldiest potato.

Highway Blossoms is a kinetic visual novel, meaning that it tells a story with no player interaction or influence; there are no choices and only a single linear path through. You won’t see multiple endings and if you don’t like the way something plays out then that’s too bad; you can’t change it. You read through the story a line of dialogue or a short paragraph of text at a time by clicking the mouse or pressing a key — or setting the auto text advance feature, though I found that a bit wonky at times.

The story itself is emotional and heart warming. Though it includes a couple of sex scenes — made more explicit by the free adult DLC available from the store page — it’s not a “boobie game”. It’s a story of grief, exploration, and, above all, love. I found myself really caring for Amber and Marina, frustrated by the obstacles in their way and relieved beyond all expectation when they overcame them. The sex scenes add to the experience, but they don’t define it. 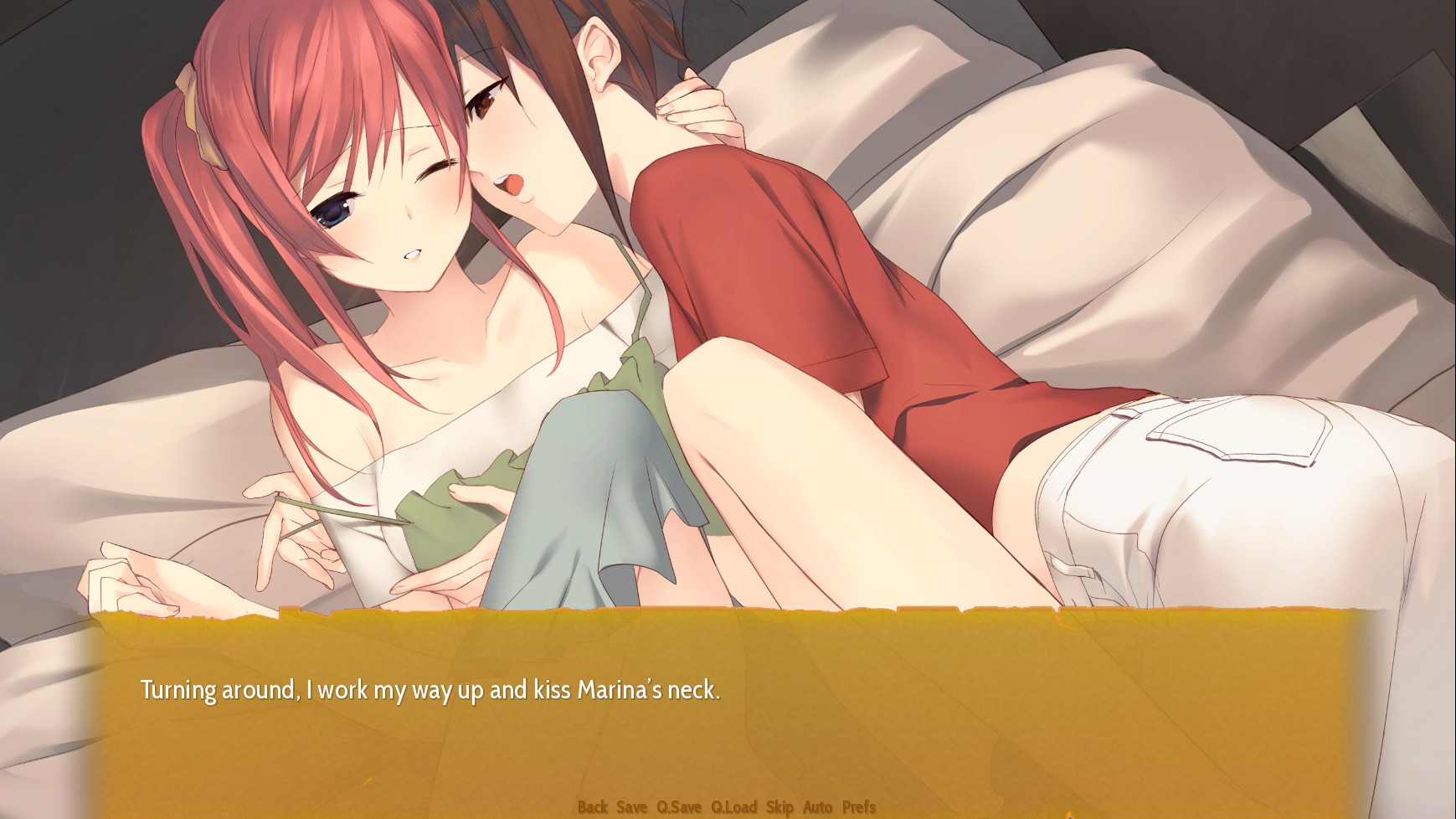 In any visual novel, the writing is a big part of the game. Poor writing can make for a poor experience, but that’s definitely not the case here. The writing is exceptional and many other visual novel writers could learn a lot from Highway Blossoms. Characters are believable, settings are realistic (for the most part), and the emotions evoked by the story are real. Even the sex scenes — most often the domain of crass writing that has a tendency to lower the class of the story entirely — are well written here. They’re meant to be arousing, sure, but they’re also beautiful and even innocent. I was genuinely moved by them.

My one complaint with Highway Blossoms is that it’s too darn short! You can expect only half a dozen or so hours for a complete play through, and that’s just not enough. The developers have done such a great job that I want more! *sigh* 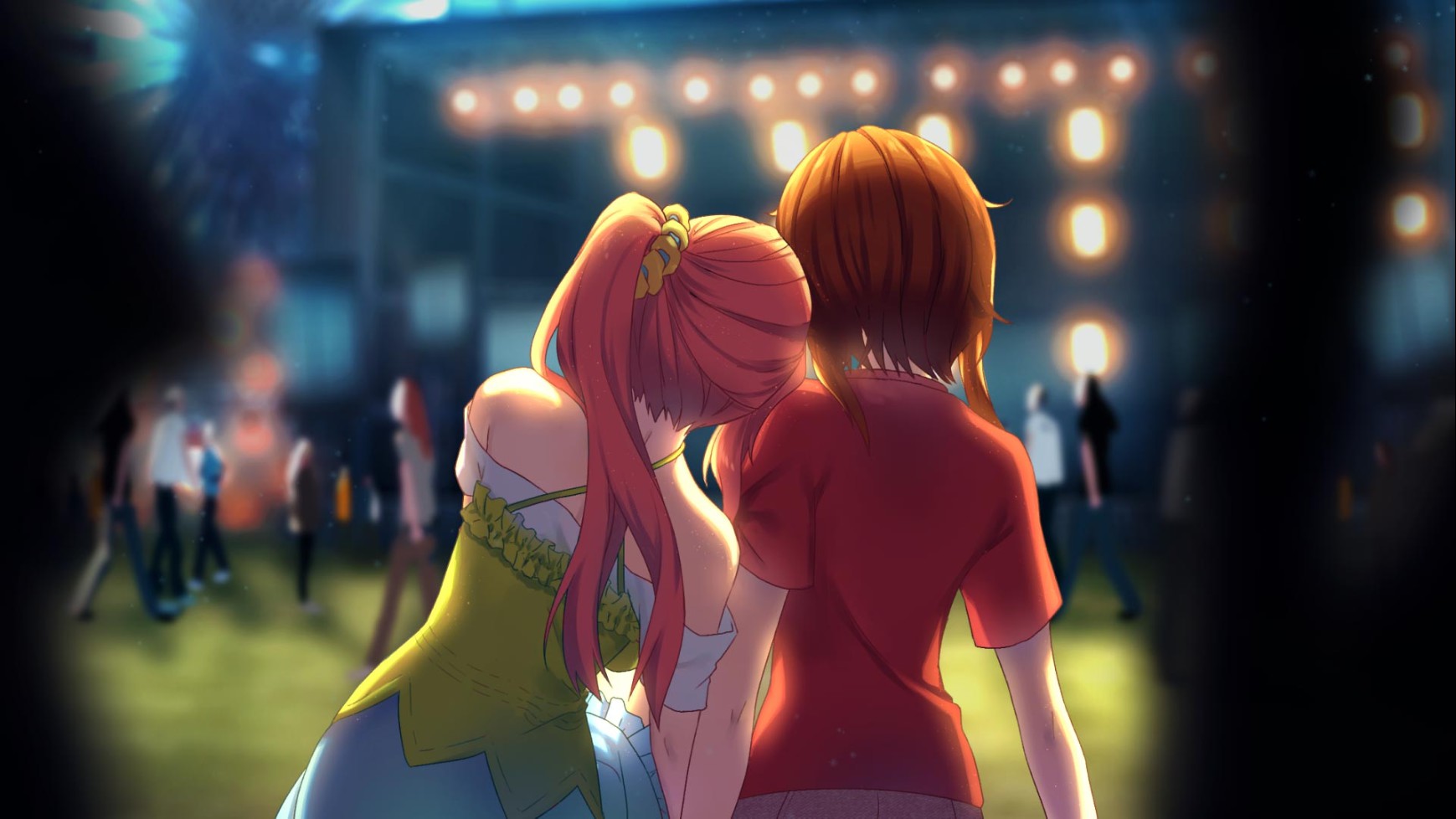 The game does include a weird “Goof Ball” mode that is unlocked after you’ve completed it once, to try to add a bit of replayability. This tells the story in a slightly different way — made decidedly stranger if you choose the [DUWANG] translation option — but ultimately it’s only really worthwhile as a bit of an interesting diversion. The EZ Mode, too, is hilarious! But the game’s main appeal is its core story, and it is wonderful. 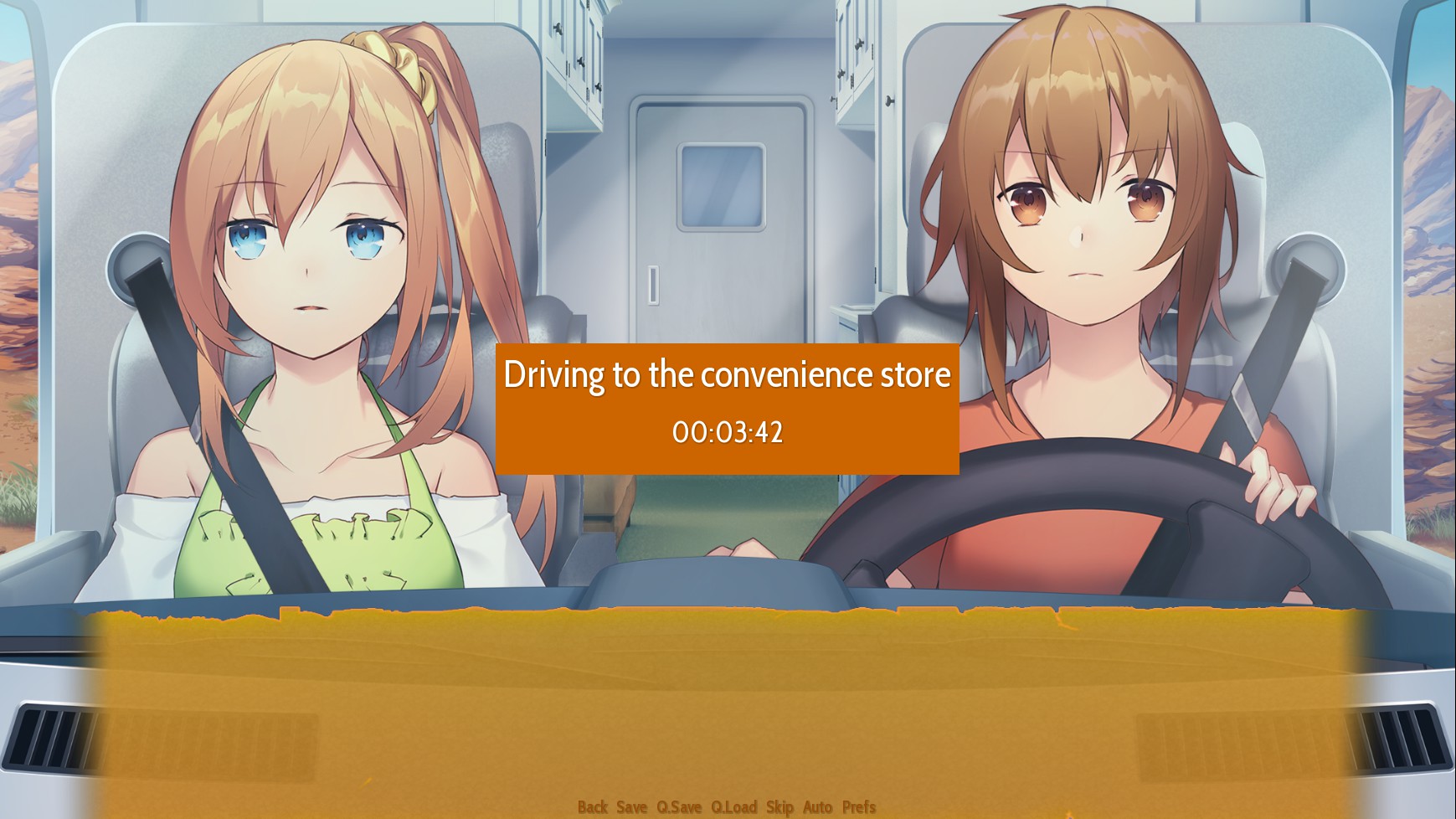 Highway Blossoms is an amazing first entry into the crowded anime VN market by a new development studio. It’s a couple of years old now, but I am so glad I went back to play it. It’s one of the most emotionally rewarding VN’s I’ve played; right up there with Fatal Twelve, though much shorter. Initially I felt that the asking price was slightly on the high side for the game’s length, but after finishing it I no longer feel that way at all. This is an excellent visual novel.