An expedition into the wilderness to investigate a primal tribe goes horribly wrong. Can the player survive the dangers of the jungle: infections, animals, natives and still keep their sanity?.

I read a bit about this game before deciding to look into it. I mainly got interested about the comments that said it tries to be very realistic with setting and dangers involved. Among all the usual apocalyptic end-of-the-world scenarios that usually feature zombies, a dense jungle with an all natural threats seemed very interesting and different. It reminded me of Just Cause 3, and I loved that game’s world with its sense of color how it was and not grim and dark at all. It’s so different than most others games in it’s genre.

But is this jungle dangerous? Can I just chill in my hut on top of a cliff admiring the scenery, or will I constantly have to battle against the animals, fever, starvation and other dangers lurking in the jungle?

This is an interesting setting. I haven’t come across another game that features a proper large jungle with great vegetation that actually feels like a jungle because it’s so dense. On the downside, it’s easy to lose your way in the vegetation and I actually did lose countless logs after chopping them down and carrying one of them back to my soon-to-be-hut. But it is a jungle, things get lost, this is most likely how it would go in a real life as well.

I have been roaming back and forth the survival area now and haven’t yet encountered anything else other than the jungle itself along with some natives and their camps, but it’s only version 0.2.1 so there is a lot to come, or at least I hope so. The roadmap didn’t offer many clues about this, to be honest. I’ll be damned if the developers won’t put in some ancient temple somewhere or a proper cave system. There’s a lot of potential to create great places hidden within the jungle off the beaten path for players, and this could really reward the player for exploring on their own. I did find some great looking spots though, like a tree fallen over a canyon that I could cross to the other side while a massive open jungle opened up right next to me, and beneath me. 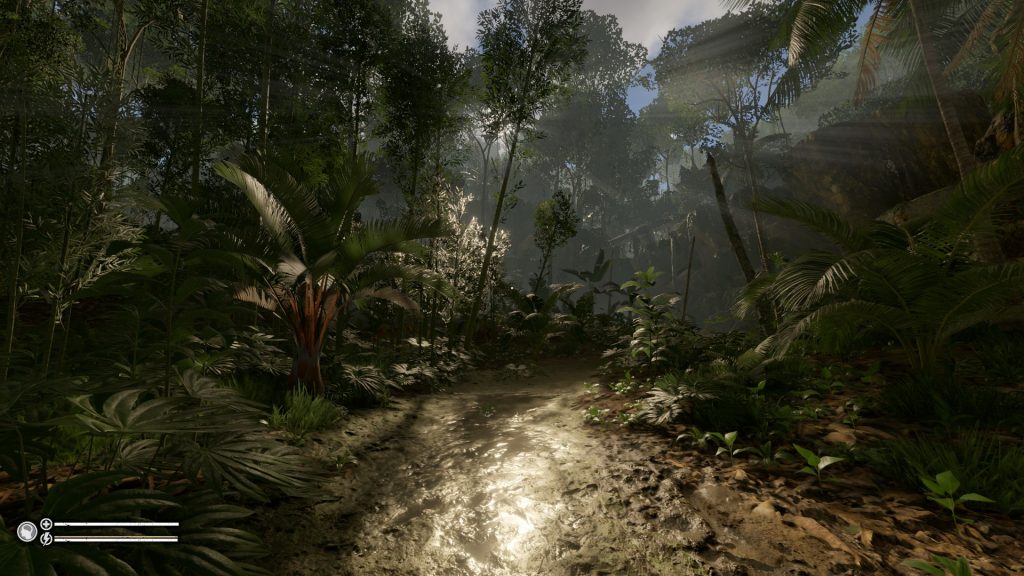 The short tutorial that’s at the beginning of the survival mode teaches the very basics, and I felt that it wasn’t enough when it was finished. After a while of fooling around in the survival mode I realized that the tutorial really was enough, it taught the mechanics but not nearly anything about where and how to use them. There’s was a lot to figure out by myself and apply the tutorial tips in different situations.

The tutorial also works as 20-minute preview of what’s to come in the story mode. It was my task to set up a camp and learn the basic mechanics in crafting, moving around the jungle, and dealing with wounds before the other expedition member signaled for help. Something had gone wrong but there wasn’t enough time to tell what.

Dangers of the jungle

Even with version 0.2.1 there’s a lot to fear in the jungle. Small wounds can escalate to infection which can bring fever and eventually death without proper treatment. Sanity is easy to lose amidst the thick jungle without access to anything else than a small hut built from sticks and leaves. Snakes that hide among the vegetation deal deadly bites and natives seem to hunt for sport. Tiny spiders and masses of ants leave a nasty rash that escalates into a serious threat if left unattended. 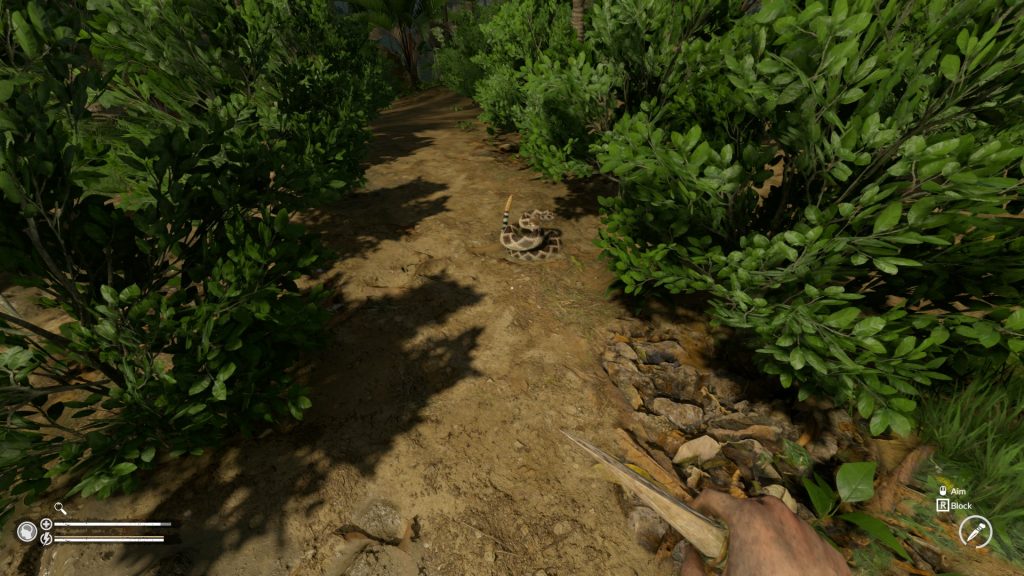 I was interested after the tutorial since the tutorial/story mode gave a great impression, but I felt I didn’t really progress anywhere in the survival mode at first. I built a simple hut, but was unable to find materials for good tools. Small stones that I could craft into a stone blade or a stone axe were far and between, and when I managed to craft either one it broke almost instantly. I then decided to start honing my crafting skills. Sticks and the lianas that I used as a rope we’re plenty, so I crafted a torch after torch to gain more experience in crafting in order to eventually make more durable items. Occasionally, I was ambushed by natives without any means to defend myself, well except for trying to hit them with weak torches. I learned my lesson quickly and always had one spare stone ax with me, ready to bust some skulls. 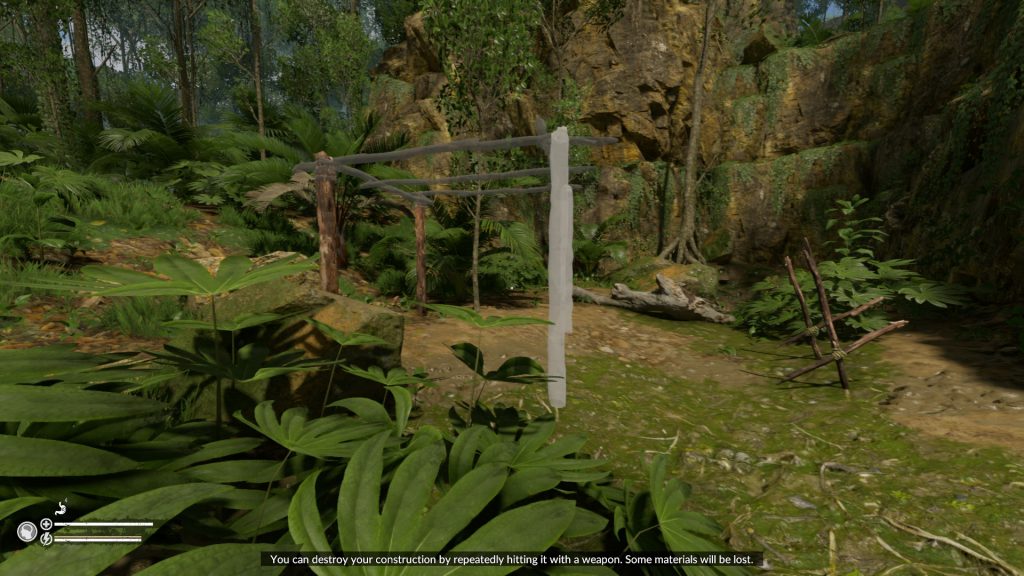 Once I had failed multiple times, but always learned something new, the tutorial really opened up and I started enjoying it. It’s rewarding in the end when the game won’t hold your hand. My only complaint is how fast my sanity was decreasing. It felt unrealistic since the main character should be accustomed to harsh conditions and the story mode preview said this isn’t their first time to the jungle. He should be able to endure much more stress.

This is a version 0.2.1, so it is expected to have some balancing issues, and after the writing, version 0.2.2 was released with a tweak to the native’s behavior. The balancing issues are being looked into. Based on the forums, I wasn’t the only one who had an issue with the loss of sanity, I’d presume the developers will look into that also. 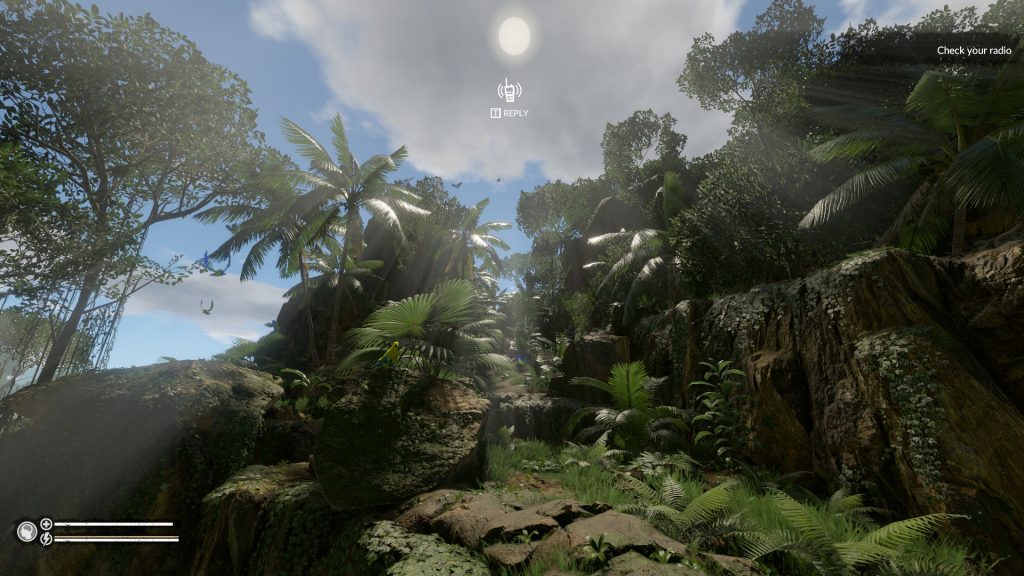 It’s version 0.2.1 so I wouldn’t rush off to go buy this yet, only because it is in a very early phase. The game is interesting and the setting is beautiful to look at while offering many possibilities. The difficulty is challenging with all the dangers lurking in the jungle. There are many things to consider in order to survive, with lots of items to craft and a great looking world to explore. This game is one of the most promising and deep Early Access games I’ve played in a while. The jungle is an extremely dangerous place, as it should be, creating a sense of tension throughout. Even though my stone knife would suddenly break after a few hits, becoming useless, or I would go completely mad within few days, I still felt interested in seeing how this game evolves and what all it will offer. Hopefully, we will see an entire story mode one day soon as well.

I would keep this under close watch and buy it later when it’s nearing completion. I have no direct reason towards this developer to suspect that it wouldn’t be finished, it’s just that so many promising early access games never finish development. Better to be safe than sorry. There’s nothing to lose to keep this on your radar while it cooks in EA a while longer.