Why You Should Play Robot Roller-Derby Disco Dodgeball.

Every now and then I come across a game that is out of my comfort zones yet the name alone interests me to give it a shot, and Robot Roller-Derby Disco Dodgeball (RRDDR) is perhaps the most earnest name on Steam. Aside from having an acronym that sounds like an order of DDR moves, this is a multiplayer/bot-match focused game centered around robots on wheels playing a game of dodgeball in arenas with disco lights. Honestly, as redundant as the description sounds, it would be difficult to explain the game beyond its name, yet it doesn’t fully give you all the details about why it is such a compelling game. 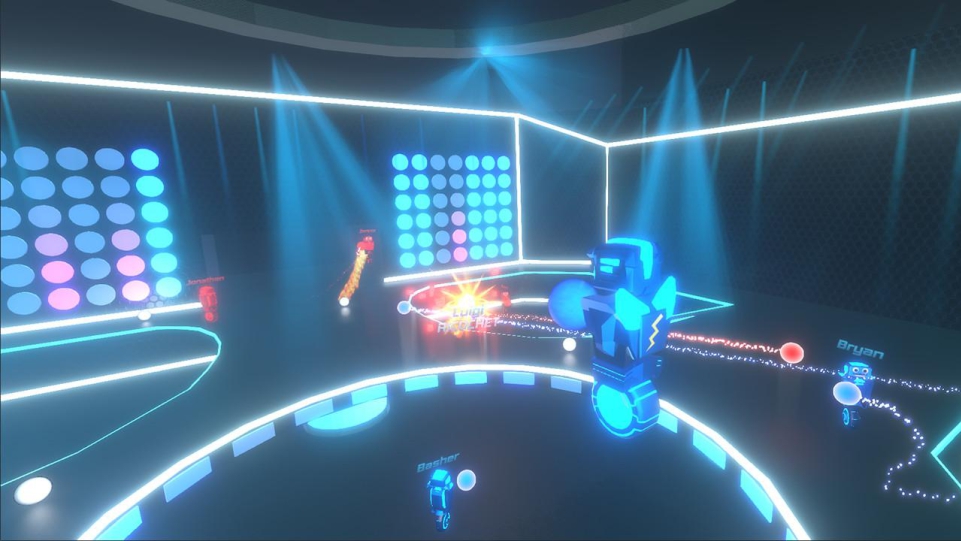 The keyword behind that description that keeps this game on my radar whenever I am in a mood for a multiplayer-focused game is the word bot-matches. Like Quake 3 and other titles, the importance of a bot-match system mitigates many concerns of low player numbers when there is a dedicated community to be found within the Workshop and community servers/Discord. (There is also a split screen option for local play.) An arcade (campaign) mode, a variety of 20+ game types, a plethora of modifiers for each mode, a selection of arcade-like bonuses for combat, a dozen or more maps, and hundreds of in-game cosmetics are all icing on top of the main course of a good bot-match. Whether you want to casually enjoy a simplistic game with a small group of friends or you are a social troglodyte like myself who wants friends to be nothing more than targets there is great value behind the game solely because of its bots.

Which Came First? The Bots or the Game?

Aside from the obvious benefits of the bot-system, there is another major reason why the ones in RRDDR deserved to be praised because they raise a good question of whether the game was designed around their implementation or was the bots designed around the game. 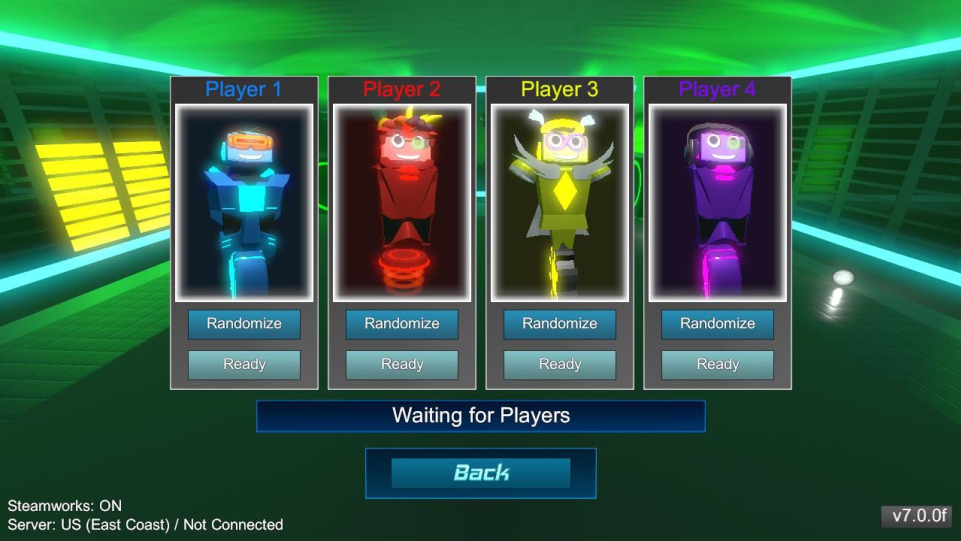 One of the many reasons why bots fell out of fashion aside from development costs, internet access and the future of online multiplayer gaming was the simple problem that making good bots is difficult. The earliest of bots within Quake where simple compared to the amount of time and effort spent to make bots mimic actual players in notable games like Unreal, Arma and Perfect Dark Zero. In the simplest of terms, these bots relied on pathfinding nodes and creating AI behavior with enough scripts and “intelligence” to create the illusion of human competition. With the steady progression of multiplayer games shifting towards verticality, destructible physics, massive maps and more technical hurdlers, it’s little to no wonder that bots fell out of fashion.

The bots in RRDDR, however, feel more than believable from their implementation not only because the mechanics of dodgeball are easier for an AI to imitate a human player but also the game rolls with the blatant fact that these are robots. Lanes, ramps, constant motion for both players and the AI, and many other design limitations meant to cater to the bots don’t feel as restrictive today when they have an appropriate theme and gameplay applied to them. The AI itself is aggressive enough and competent that you will find them comparable to human intelligence, and the core rules based on dodgeball (i.e. you can throw or catch a ball to knock someone out or use one to block a shot) makes the gameplay always feel fair. The result creates a game where it doesn’t matter whether the bots or the game came first they feel integral to the game, and the player is simply another vessel in the never-ending party.

Similar to the problem of not writing a redundant description for the game, describing RRDDR beyond it being a robot-roller derby version of dodgeball seems inevitable. However, the best mental image I can think of that details how the game looks and feels to play would be to imagine a gladiator match of muted CL4P-TRPS from Borderlands playing dodgeball. There is more to say on the gameplay than that description alone as the robots here are more charming in their simplicity, but that image provides an idea of how awkward the controls can be on first impressions.

Players move without stopping as soon as the player initiates movement, but the players’ course can be corrected in stiff changes or given a boost to evade danger. As previously mentioned, this aspect feels designed more so around bots than players, yet it is not a deal-breaker but something you should expect before you try it out. Meters for the Boost and the Jump recharge frequently to prevent them from being spammed as well as ramps and vertical level design to allow these maneuvers to be more viable. Destroying opponents offers a lot of little touches from the momentary slowdown to revel in your success as well as to chain kill-streaks/retrieve the ball as well as hundreds of pop-up rewards like skill-shots or announcer calls. All these elements compliment one another as well as the core rules of dodgeball applying to robots, eventually becoming comfortable despite always feeling like the training wheels are always left on the player.

In addition to the controls, there are many complex elements added to the core gameplay of dodgeball without taking away from its simplicity. Ball-Upgrades from Boomerang to Fire to Robot Upgrades like Jetpack and Pogo-Stick add quirky elements to the gameplay without ruining its balance. Maps feel open arenas and symmetrical for easy navigation with little downtime and with full compatibility with all game types such as King of the Hill, Basketball, Juggernaut, Capture the Flag, etc. Along with these aspects geared towards the multiplayer, RRDRR isn’t afraid to alter the game differently for the single-player audiences as the Arcade Mode utilizes scores to purchase upgrades that will alter the “campaign” such as recharge timers, extra lives, score bonuses and more. This mode also includes boss enemies, mini-challenges and its own progression system to make up for its limited value. 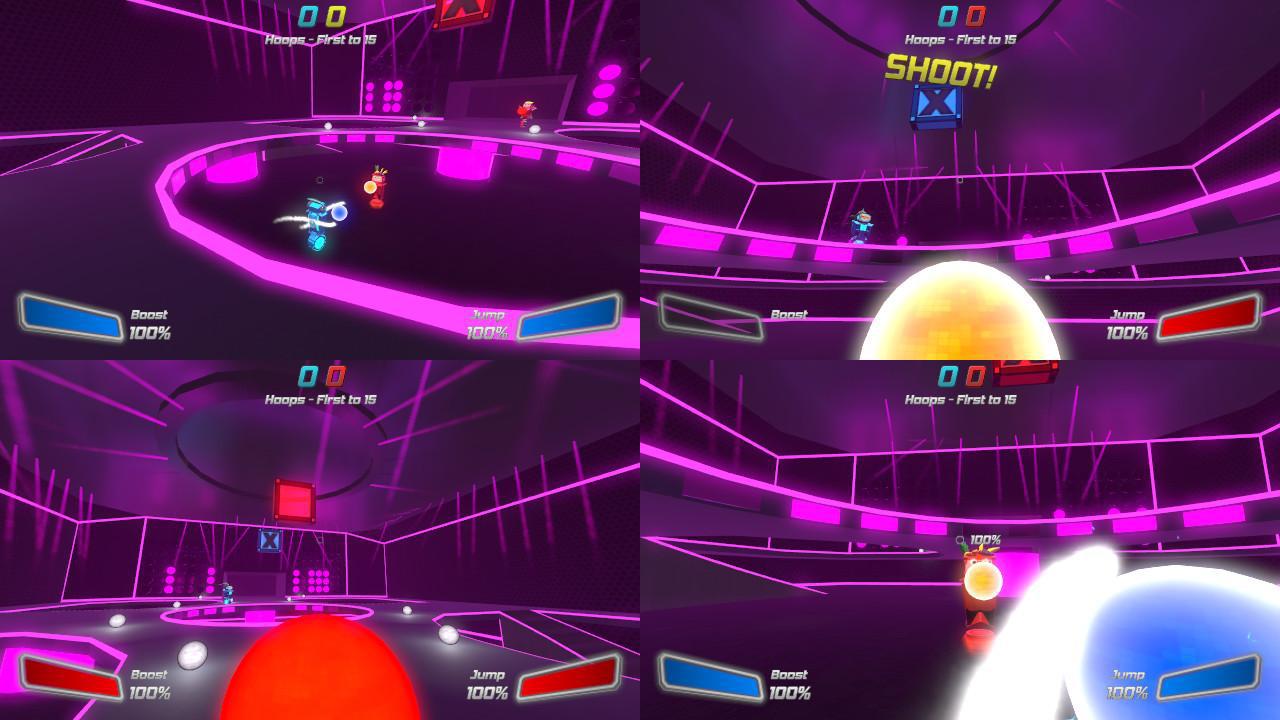 These elements and the foundation of controls prevents newcomers from needing to have high skill to succeed as the rules are simple while also rewarding experienced players more know-how for map-control as well as familiarity with its systems to catch newcomers off-guard. There are relatively few problems to complain about aside from the visuals which can be tweaked to be less grating on the eyes that it would be difficult to describe this game anything less than perfect.

Good, Bad—I’m the Bot with the Ball

At the end of the day whether it involves bots or disco, dodgeball is dodgeball. If a first-person game of the sport doesn’t interest you, then one featuring robots will do little to change your mind. If you ever wished to enjoy a game in the style of Quake—then there is always Quake 3/Quake Live, and if you go into this game with that mindset you are not going to find it. However, if you have ever wish to enjoy something like Quake with friends or alone and with perhaps not as much complexity, then Robot Roller-Derby Disco Dodgeball may be the kind of gig best suited for you.

This game deserves a rating of a SAVE.

The Good:
Simple yet in-depth gameplay whether you want a casual or dedicated game
The single-player is entertaining enough if you don’t care for multiplayer.
Online and local multiplayer support
Despite the gimmicky name, there is plenty of variety
Dedicated communities and workshop support
Whether you have only few friends or none, the bot-matches will keep the game alive
Options to tone down the graphics if the colors are too much or to add your own music

The Bad:
Controls take some getting used to at first, but they may not be for everyone
If dodgeball turns you away, then a niche game on dodgeball will likely not be persuasive
The “campaign” mode is only limited to an Arcade one