If you are into violent sports games where murdering your opponents is a valid tactic, there isn’t much on offer. The Blood Bowl series is quite successful, but it’s turn-based. Laser League is great, but there is a noticeable lack of blood and violence. If you need to take out your frustration on another meatbag in a more direct way, Graveball pits bloodthirsty goblins against each other in some sort of rugby or American football, and you can play it with four people locally or up to six people online.

(recording made the framerate tank here and then, which did not happen to me under normal conditions)

The matches are played as 3 versus 3, with bots of varying difficulties filling the remaining spots. There is a ball, and for it to be scored it has to stand still for two seconds at the end zone, behind the goal line. Alternatively, now and then rings appear above the end of the pitch and sending the ball through one of them can be worth extra points according to the distance. 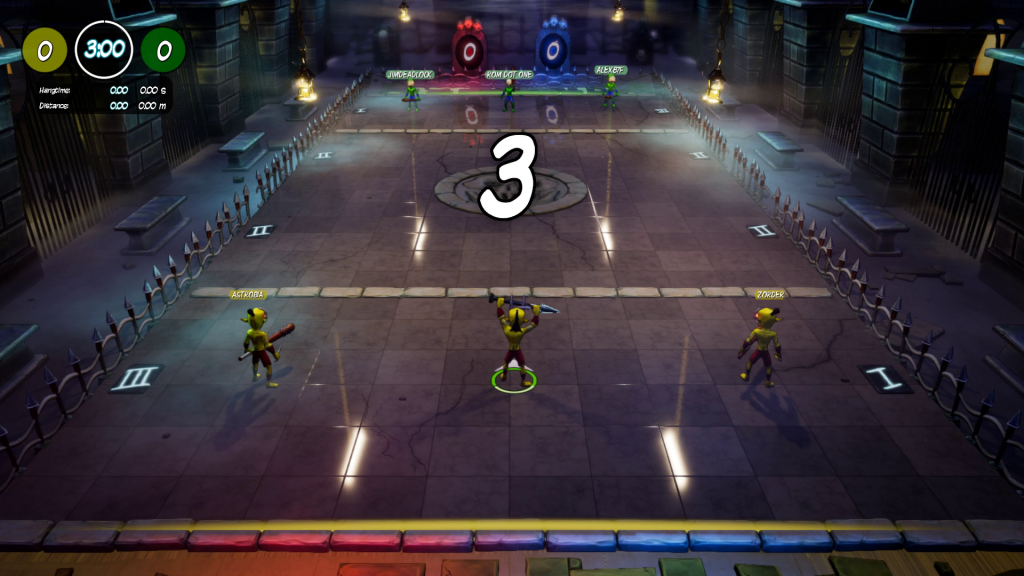 There are no rules

Don’t you dare think that the enemy team will let you score peacefully. They have spiked bats, spears, bones and other friendly reminders that they don’t want you on their turf. All goblins also have a knife, but they won’t dirty it with the blood of their enemies. It’s solely for private use, so they can kill themselves in the middle of the field. 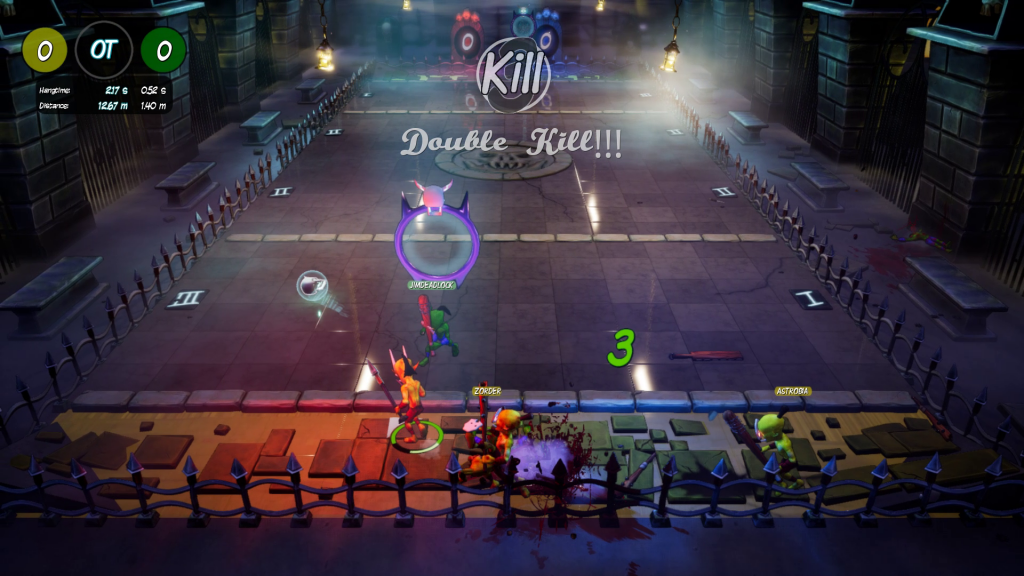 Some kind of suicide squad

Wait, what? Kill yourself? Yup, and that’s the original gameplay mechanic of Graveball. Dead goblins become ghosts that can quickly soar through the field, and thus it’s a valid strategy to commit suicide to run faster across the field for attack or defense, then suddenly materialize out of nowhere, ready to strike. Hence the sacrificial knives to quickly get the deed done. However, if a goblin gets killed aside from their own hand, they will be stuck for a few seconds before they can move as a ghost. Live players cannot see ghosts, but pass away and the veil will be lifted. It will feel like you are playing the game on a second level, seeing ghosts moving about the place. Respawn in the flesh and you will only see other meatbags. 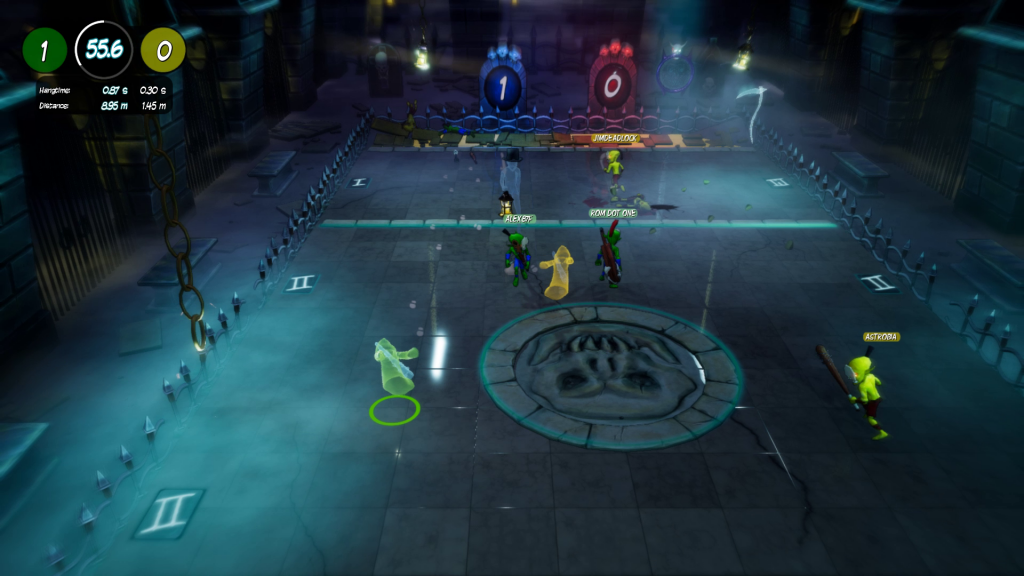 Now imagine a situation where you are alone near the end zone, the ball under your shoulder. A wild enemy goblin appears out of thin air and tries to murder you, but you jump and dodge the scythe. A teammate appears behind the enemy goblin and surprises him by arranging a meeting between his bat and the tender back of the victim’s neck. Then another opponent shows up, you throw your ball behind the goal line. Your ball touches and the countdown music starts. The enemy goblin dives and touches the ball, just enough to offset the timer. You reward that pesky annoyer by murdering it with your spear. The first enemy to die has now respawned and killed your teammate, and one of his friends finally showed up. One of them hits the ball to offset the timer, the other one kills you. While dead, you witness the ghost of the third player of your team. He is wearing the deadly scythe, that’s why he was so late. He appears to the world of the living and sends two opponents back to the other side that he just left. However, they just had enough time to kick the ball to your side, and one of their ghosts is rushing for the ball. You have to go back to your side of the field, quick!

The fights are completely chaotic in a good way. In a bad way would mean that you can’t make sense of the action, while here it’s easy to follow. It’s just that the situation keeps changing rapidly as the goblins murder each other and respawn, and one hit is enough to kill someone. 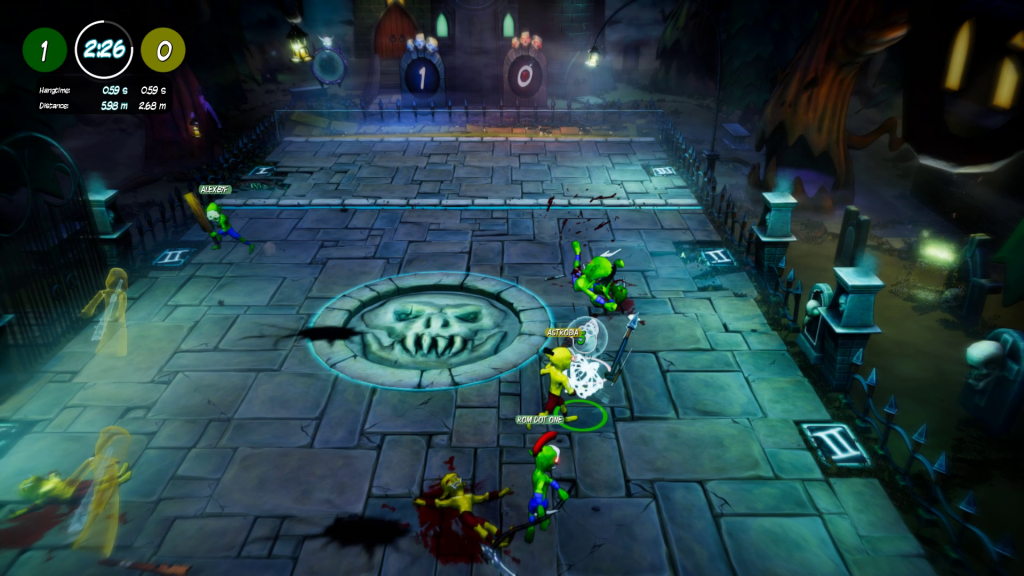 There are so many buttons for the controls, that I had some trouble adjusting (feeling like an octopus while grabbing my gamepad) and I felt better with keyboard and mouse. All the buttons can be remapped (thank you for that! It’s super rare in these sort of games). There was a slight issue with one of them (taunt) that does not display the new key but it still works. Anyway, you can taunt, throw or drop the ball, throw your weapon, attack, jump, dive, and commit suicide. Perhaps I even forgot something, but in any case, it’s a lot, and these activities consume stamina so the pacing does not become completely out of control.

My biggest gripe with this control scheme is that throwing the ball and throwing the weapon are on separate buttons, but there is no point since the goblin does not hold the weapon while it carries the ball. One of my friends remarked that it would have been nice to have a button dedicated to dropping the ball without throwing it to avoid mistakes behind the goal line, and we pestered against the fact that sometimes a goblin would automatically pick up a ball he has just dropped on purpose. 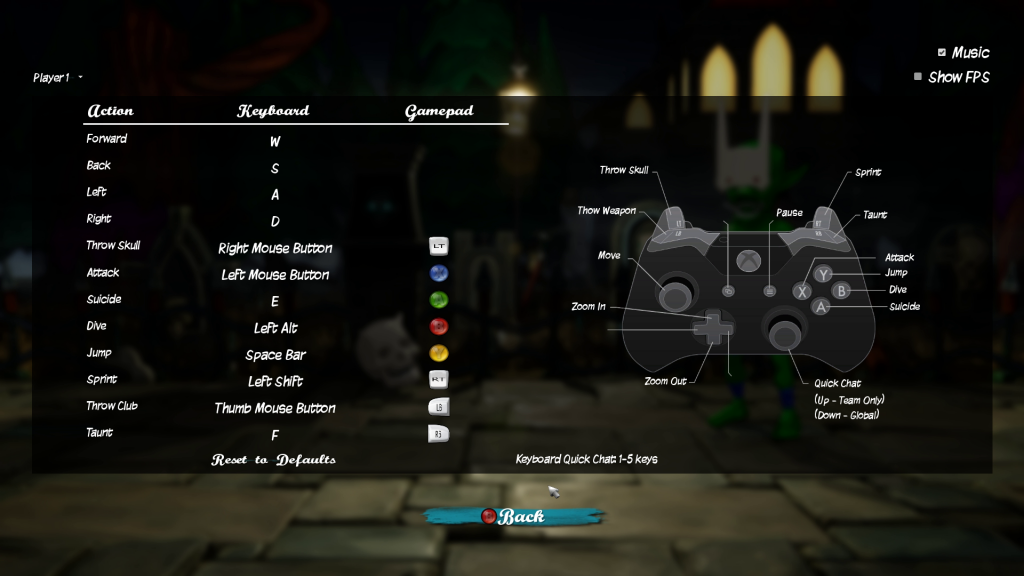 Something that I can’t wrap my head around whether it’s good or bad is that when a goblin throws their weapon, they will respawn without it. The only way is to find a weapon lying on the field (or the scythe), but since many weapons get thrown out of the area along with the fact that the ones lying on the ground disappear, it’s not rare to see a clueless goblin walking around without a weapon, unable to harm anyone. While it sounds bad, it’s still good in the sense that it prevents people from exploiting the throwing mechanic, it has to be a very deliberate choice or the only solution in a desperate situation. When playing online we experienced more or less lag depending on our geographical positions, but it could also have been the fact that attacks are a slow swing and a club needs to connect to a body before registering a kill. 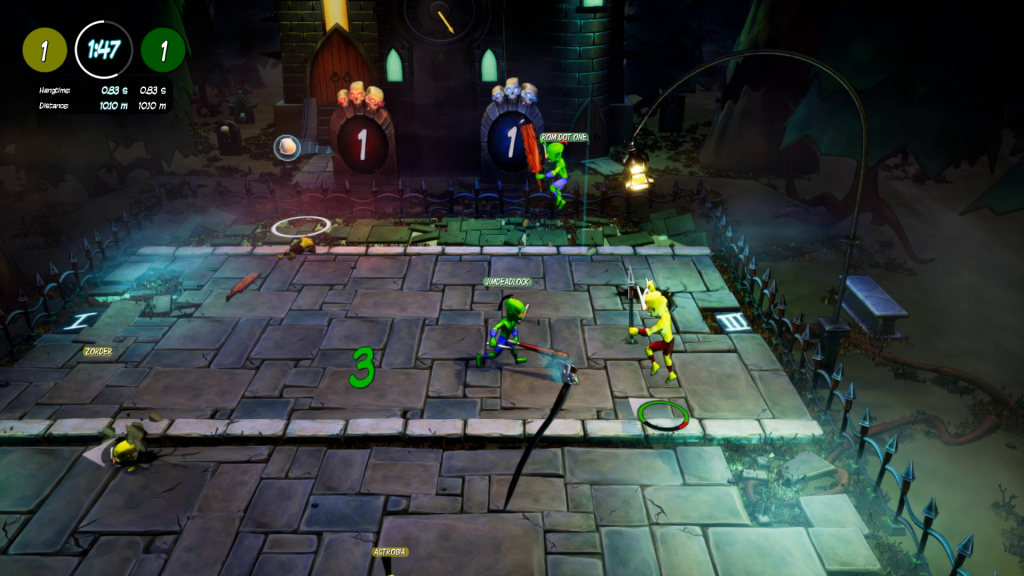 One last thing that I did not enjoy was the customization. Well, it’s good that it’s possible to customize goblins, but it costs a lot of in-game gold to unlock stuff, and it’s unlocked randomly rather than what you want which is super annoying. Also, private matches did not yield any gold, and I don’t see myself playing against bots all day long to unlock new hair for my goblin. 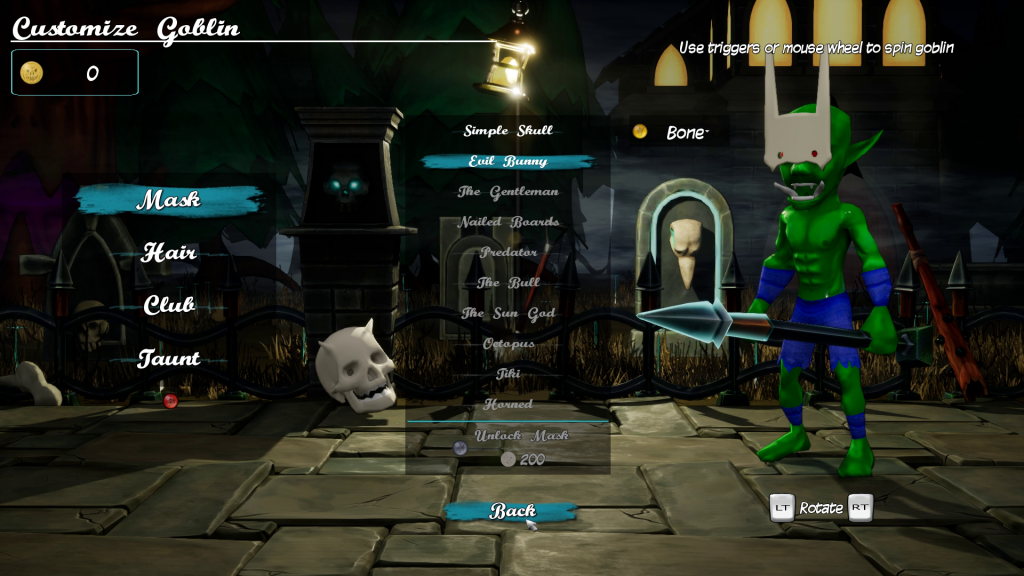 It’s always hard to review an indie multi-player game, as your enjoyment invariably depends on who you are playing with. Well, for Graveball prepare yourself to play with bots a lot. The online multi-player is empty (as often with indie games), and it’s really difficult to organize an evening with 6 people. It took us a long time to finally record the video accompanying this review! If you want to play with local friends, you will need bots because 2v2 does not work that well as there is a rule to prevent ghost movements when all players from a team are dead. Otherwise, the last possibility is to join the game’s Discord server (available with the game) and see there if there are people up for a game. 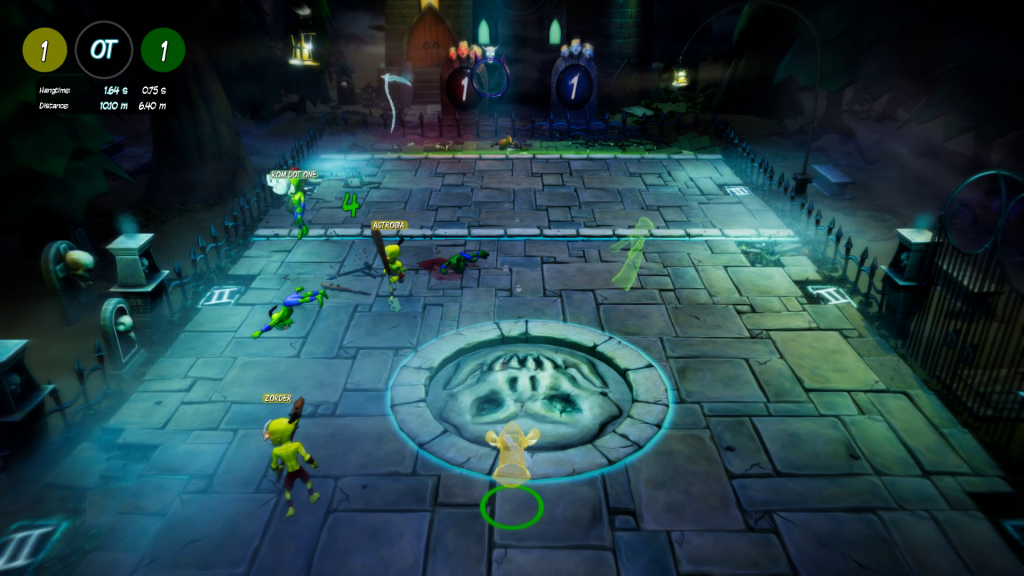 The game lacks a tiny little bit of polish. I would have loved to see power-ups to spice up the action, or practical differences between the maps, or that the NPC ghosts occasionally crossing the field would somehow take part in the battle. When we played, we laughed, we had rivalries, we had fun, we reveled in killing each other. No one said “I hate this, can we play something else?” as happens often when I force my friends to play indie games with me. We spent several hours on this without feeling bored. It’s not a mind-blowing game, but it’s very enjoyable for a cozy evening with friends.

How come this game is not more popular? What’s on offer is good but a bit bare-bones. There is no career mode, no power-ups, no fighters from different orcish races or else. It’s simple and it works, without a little something to make it stand out. Well, actually what’s missing to make it stand out is also a lot of marketing, because the indie market is pretty cutthroat at the moment. 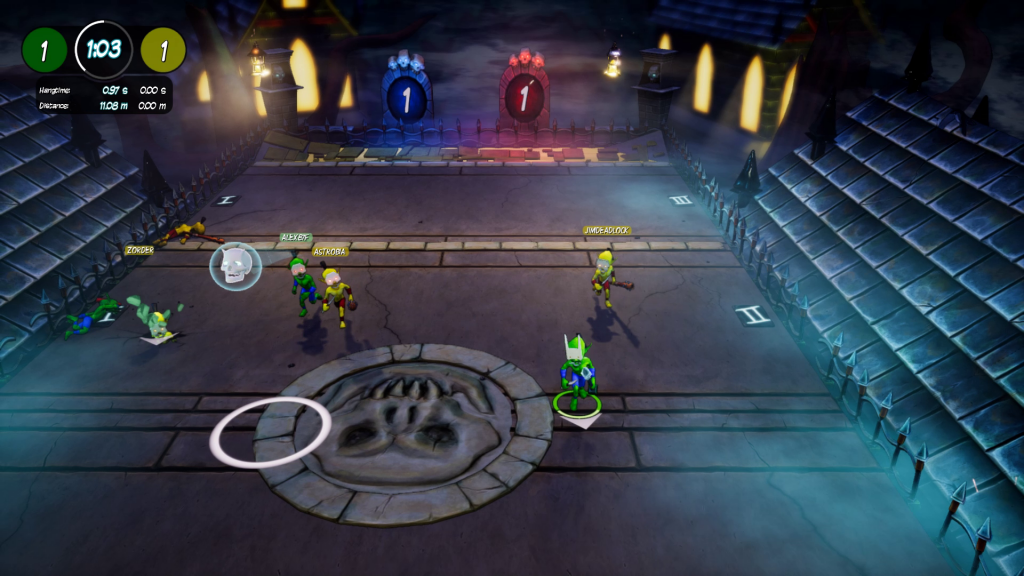 All in all, we have a fun violent sports game that leans more towards murder than towards technical play. The field is busy with both the living and the dead who rush to regain their positions, and if all the stars align and there are enough players it gets fun and addictive for the time of an evening. On the downside, online servers are not populated and the content is not particularly enticing towards repeated sessions.

Thanks to Jim, Zorder, Astrobia, Rom1, and Alex for playing this game with me and helping me record the video!