A Battle Royale inspired by STALKER.

The Battle Royale genre is exceedingly popular these days, with Fortnite and PUBG showing off their millions of users. This started a trend in the industry, with many games trying to do the same and subsequently ending up dead on arrival (Islands of Nyne, Radical Heights, The Culling 2, and so on). In that context, Fear The Wolves shows up on our radar. It’s another Battle Royale game, but with elements inspired from the STALKER series as the game is made by Vostok Games, a studio founded by GSC Game World veterans. Let’s see how it fares. 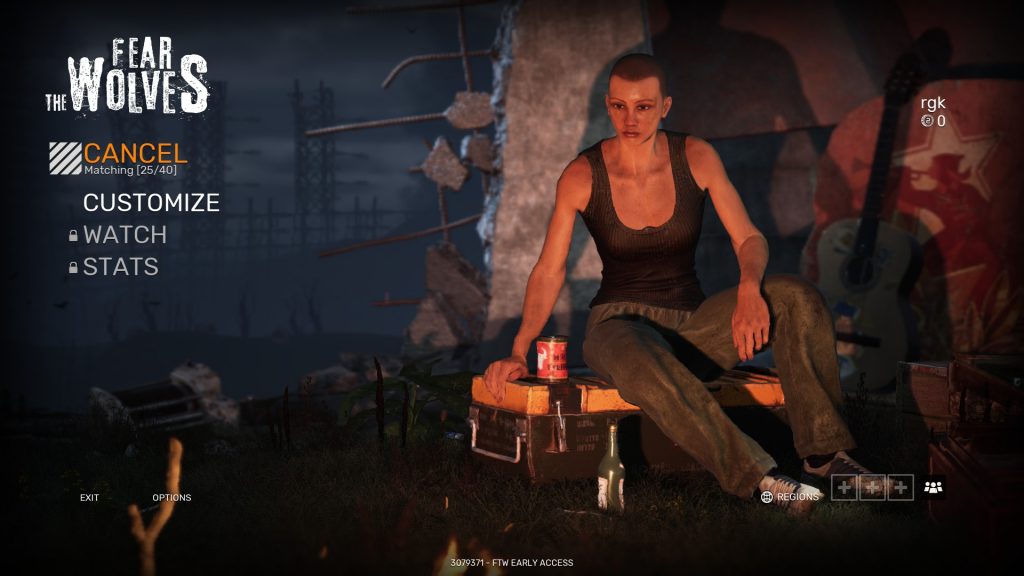 Once in the game, you can customize your character, male or female. So far, they are all bald, but let’s not forget that the game just appeared on Early Access. There are clothes or camouflage to unlock with points that you earn by playing the game, so far there are no micro-transactions with real currencies. Then once you are happy with your egghead, you can start a game. There are solo queues for 30 to 40 players, so it’s much less than PUBG or Fortnite. I only played solo, but it’s possible to form squads with up to 4 players in the hope of filling those 100 player servers. 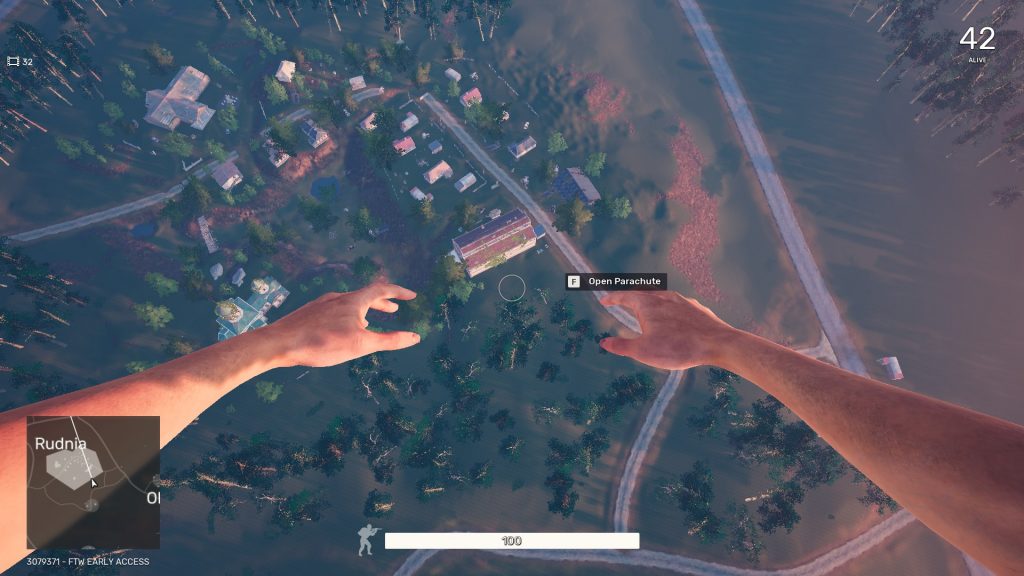 My waiting time was generally from 5 to 15 minutes, followed by a few minutes waiting in camp with nothing to do. Then the usual plane took us to a 25 km square Pripyat environment, with more or less parts of the map already in the red according to the player count. So, fewer players and a less safe surface to land on. The terrain and places have much more character and charm than the generic assets in PUBG; there are the usual ruined villages, but also beautiful autumn forests, sunflower fields, derelict factories and abandoned military camps to complete the picture. It would be lovely to hike through this countryside, minus the need for a hazmat suit. Weather effects such as rain, fog or bright sun appear regularly, slightly affecting gameplay conditions. 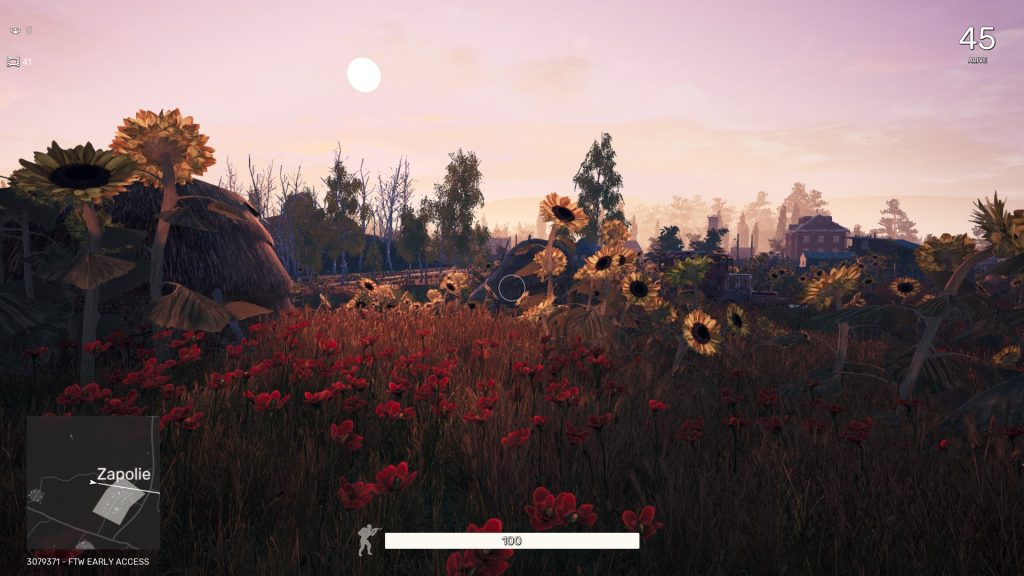 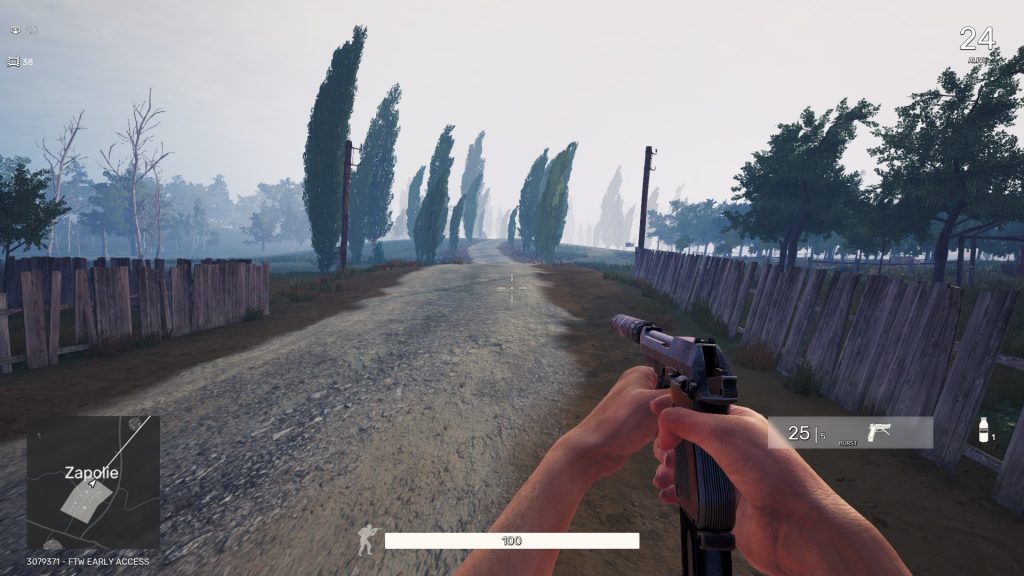 While the game is more colorful than STALKER, the overall atmosphere is chilling, with a thick sense of dread backed up by the horror music, and the howling of wolves in the not so far distance… As Battle Royale games have realized that doing the same as PUBG will not be enough to claim their slice of the pie, the most recent ones are evolving towards PvE implementation, such as in Hunt: Showdown, Last Tide, and Call of Duty Black Ops 4. Fear of the Wolves adds the titular four-legged beasts who are decidedly not good boys this time, stalking nearby players in a pack. My first encounter with the fearsome beasts was actually quite funny, as I almost did not notice them until I ran them over under my soviet wheels. Indeed, as long as I was in a vehicle they did not attack me. But whenever I was on the ground they were quickly all over me. They are not too difficult to dispatch, but the danger comes in alerting other players to the sound of gunshots and revealing your position. Other dangers come in the form of local anomalies, or the usual storm circle closing in on the map that is now some sort of radiation blocking off area after area. Sometimes it can even reach squares towards the center of the map before the sides were completely finished, so it behaves differently from the storm. Also, as long as you are sprinting you are safe (and there is no stamina bar like in all those games with weak characters that get exhausted after running for five seconds). This means that it’s important that you keep an eye on your map or indications on the screen to follow the progress of radiation, but if you are taken by surprise it’s not a death sentence. In any case, radioactivity is very nice to see, with particle effects reminding me of rose petals falling from the sky. 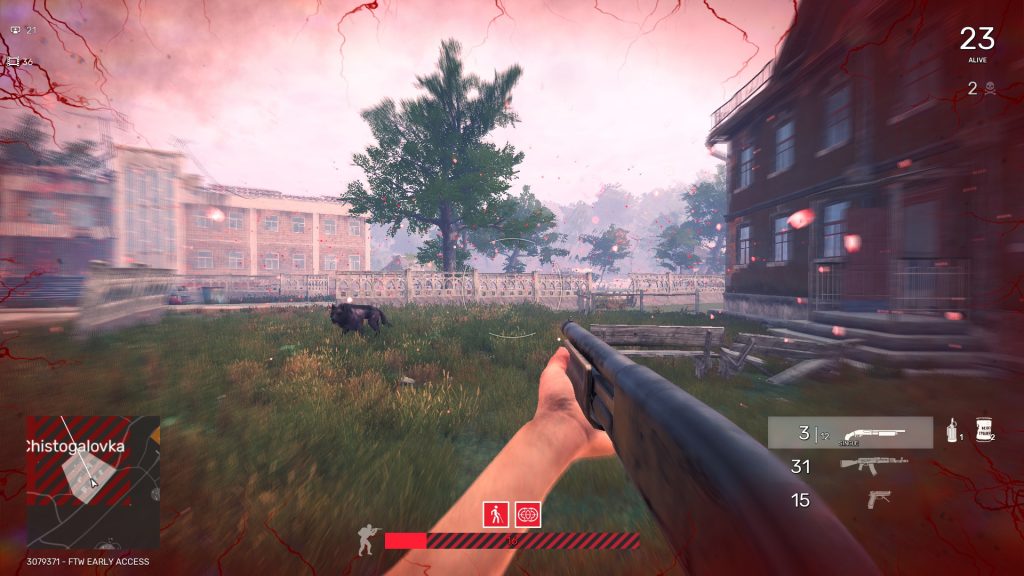 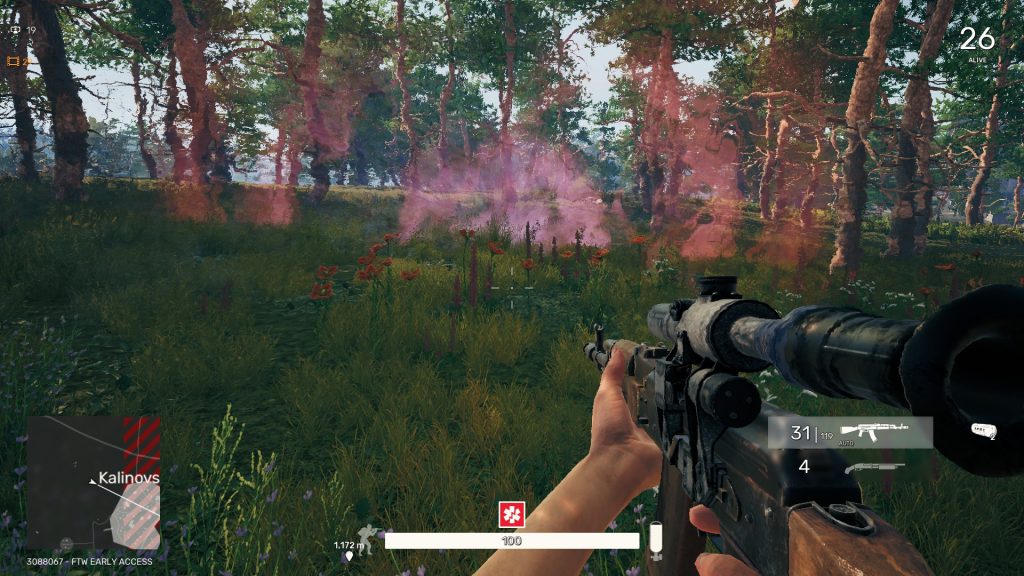 Towards the end, a helicopter arrives to save only one person. Anyone can grab the cord and slowly climb to safety, even if there are other survivors left. This means that the end dynamic of this game is completely different from what we see usually, as it transforms into a very tense King of the Hill with all the remaining survivors in the area. While someone might try to take advantage of the thick red smoke to sneak towards the exit, once a player starts to climb, everyone is alerted. Do you prefer to rush the cord, wait for other players to be busy killing each other, or wait to be the only one left while risking to let someone escape first? This moment is clearly the climax of any battle, and it feels much more intense and interesting than any other Battle Royale game that I played. 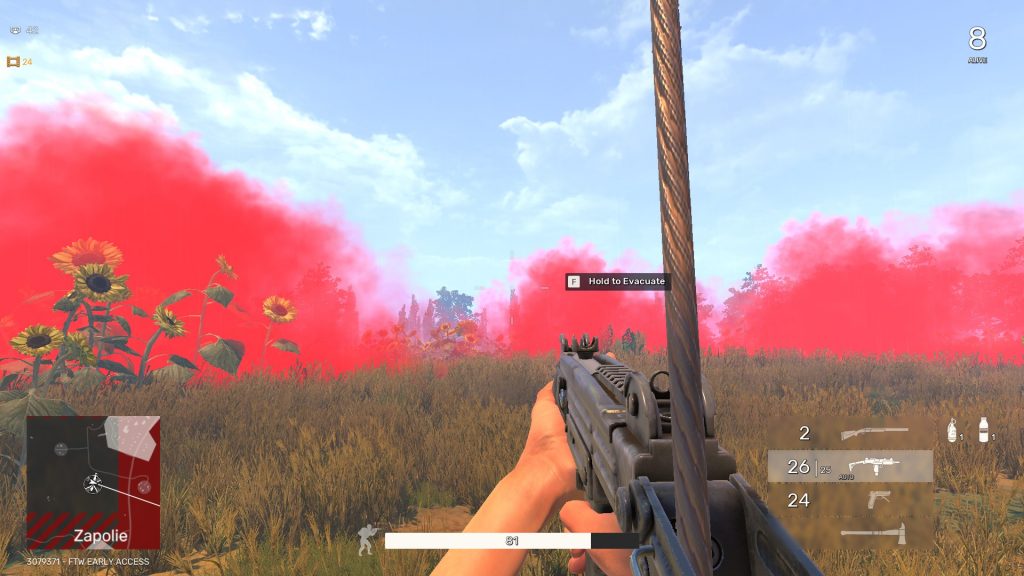 There are not many weapons in the game yet, so you can quickly recognize and try them. As usual, there are attachments such as scopes or extended magazines, and I liked the real-time interface that allowed me to perform this process quickly at the bottom of the screen without having to cover the action with a loadout menu. The controls and interface were surprisingly smooth, I got the hang of the game much faster than other Battle Royale games. Surprisingly, shooting was not as realistic and demanding than PUBG (still much more realistic than Fortnite, though), as hitting targets was relatively easy. It takes a few bullets to down someone, so I would situate the time to kill someone in approximately that order: Call of Duty < PUBG < Fear The Wolves < Fortnite. I must admit that I don’t like PUBG much, and I much preferred the arcade fights in Fear The Wolves. It’s not even possible to lean or prone, so the fights are more dynamic and not the static camping snipers type. Although, as a fellow reviewer noted, it’s weird that there are realistic elements on top of that such as weather affecting the gameplay and the possibility to hold your breath. 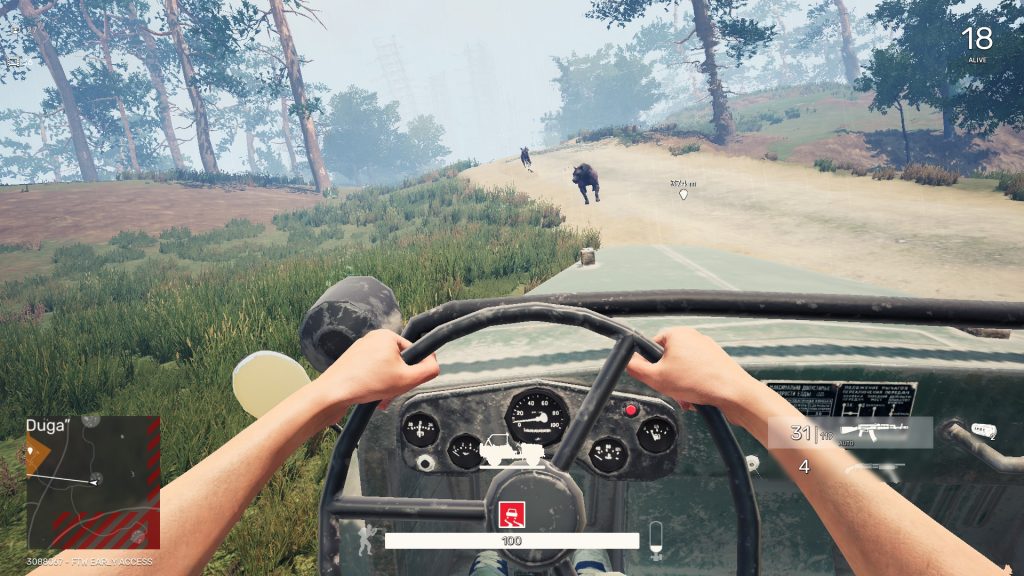 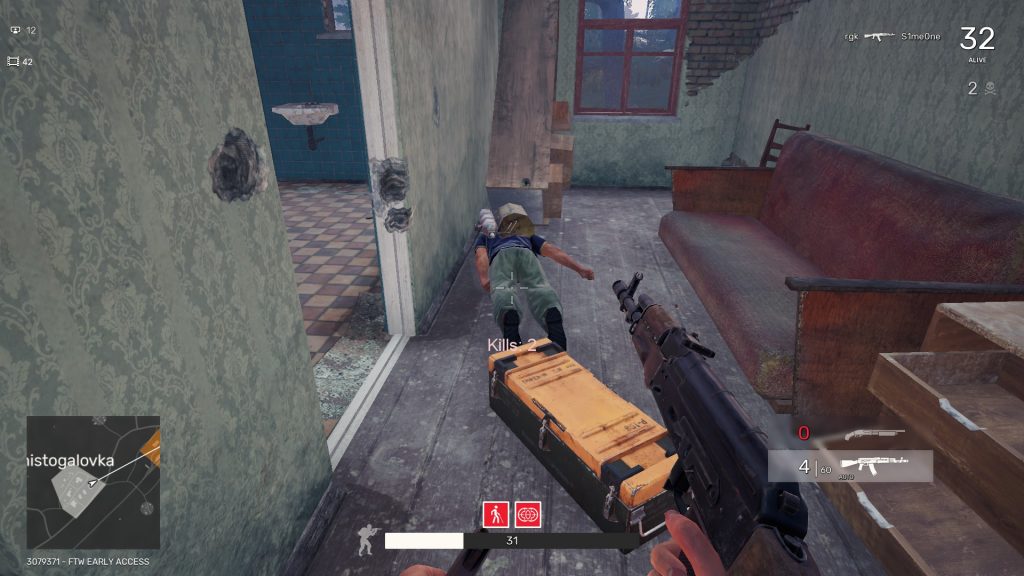 Weather effects and vehicles were occasionally lowering my framerate, and I had to play in low for a smooth experience. The game looks ok at medium, and it’s not mind-blowing at high. This is clearly not quite as displayed on the Steam store page. In any case, I don’t find the visuals to be an issue but a lot more optimization needs to be done. As of now, the game does not run well on most machines. Likewise, sounds do not sound finished yet, or at least their balancing is not yet optimal. 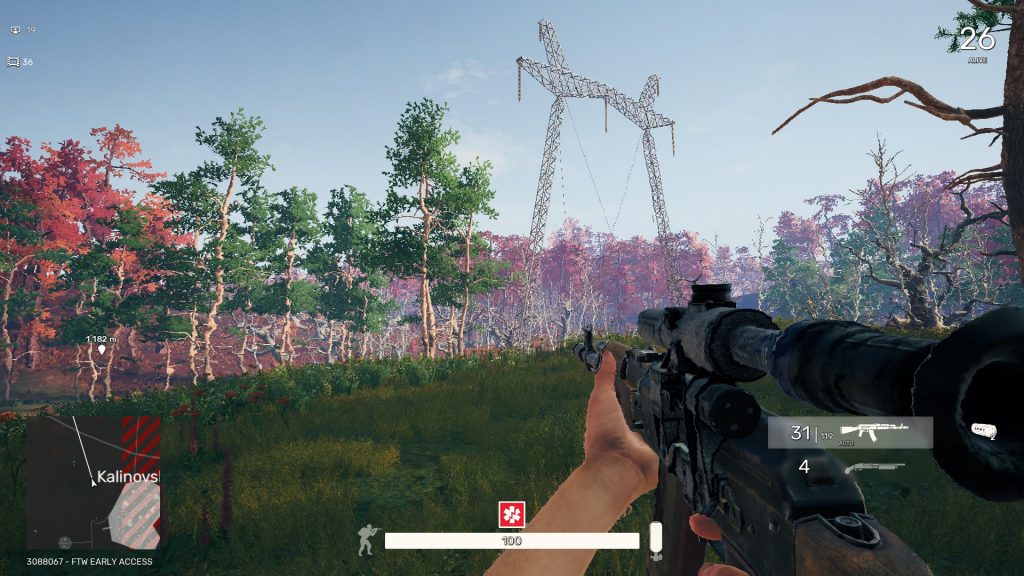 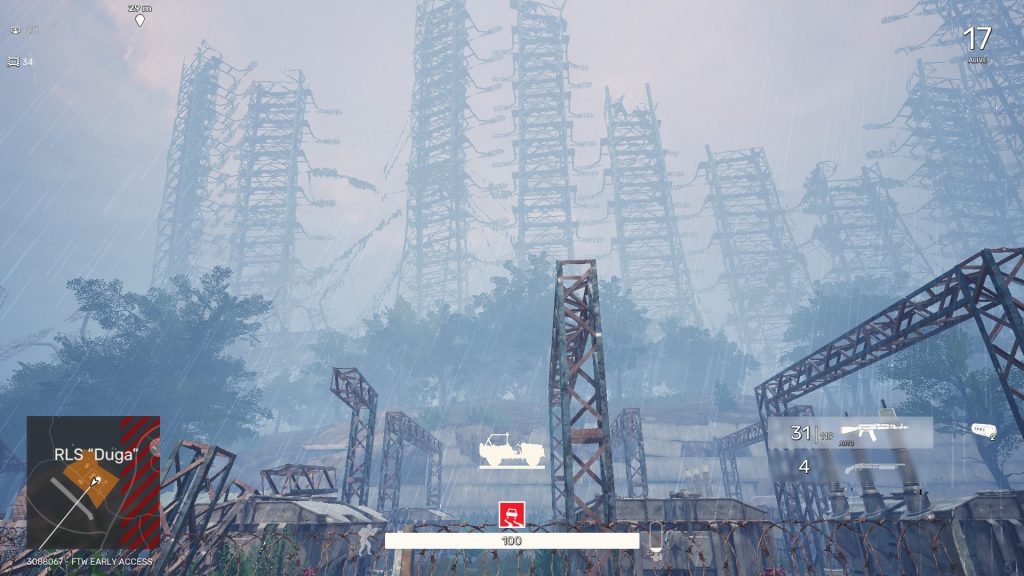 To be honest I enjoyed my time with Fear The Wolves. I am not a Battle Royale aficionado so I might not be the best judge, but besides its optimization and a few details here and there, it’s quite good. The pacing was very satisfying, and each player had enough room to breathe without being too far apart. I find it more fun than PUBG because it has arcade gunfights, a pretty environment, and the wolves. Problem is, the market of Battle Royale games is now saturated, a few doggos here and there might not be enough to mark the experience as something completely different from PUBG and convert its fanbase, especially considering that PUBG had much more time to mature and provides a depth in its combat that many people are seeking. So far, Fear The Wolves seems to struggle to convince a playerbase in other areas than Europe.