Outpost Zero is yet another Early Access survival-crafting game. It looks lovely, but unfortunately doesn’t (yet) play that well.

Outpost Zero is the latest in the seemingly endless stream of multi-player survival-crafting games in Early Access on Steam.

It begins with a little CG video that doesn’t really tell you much, but looks quite nice. The game proper starts with you falling out of the sky of a strange, mostly barren-looking planet in a little drop pod. This hits the ground with a bang, depositing you — a fully autonomous AI humanoid — on the ground and promptly exploding. A sarcastic-sounding software module briefly explains your role, and then you’re left to your own devices to harvest, craft, build, and fight the indigenous creatures and roving pirates that turn up to steal your resources — as well as other players, if you’re playing PVP.

The story so far is interesting and entertainingly presented, but minimal. It feels like an excuse for the game rather than a framework for it, and I have no idea if there’s any sort of end goal. It is only early days, yet, though.

By default the game is played in first-person view, but you can see your robot from a third-person camera if you’d prefer. Given that there’s no customisation I ended up staying in first-person most of the time. The game runs on the Unreal Engine 4 and looks rather nice. The game world is nicely modelled and streamed with no noticeable lag or stuttering, characters and enemies look and move well, and special effects are pretty awesome, along with the great day/night cycle and special weather events. I have to say I’m disappointed at the lack of dynamic lighting from some effects, though, such as the ‘handy’ beam that really should light up the surroundings more. A proper ongoing weather cycle would be good, too. 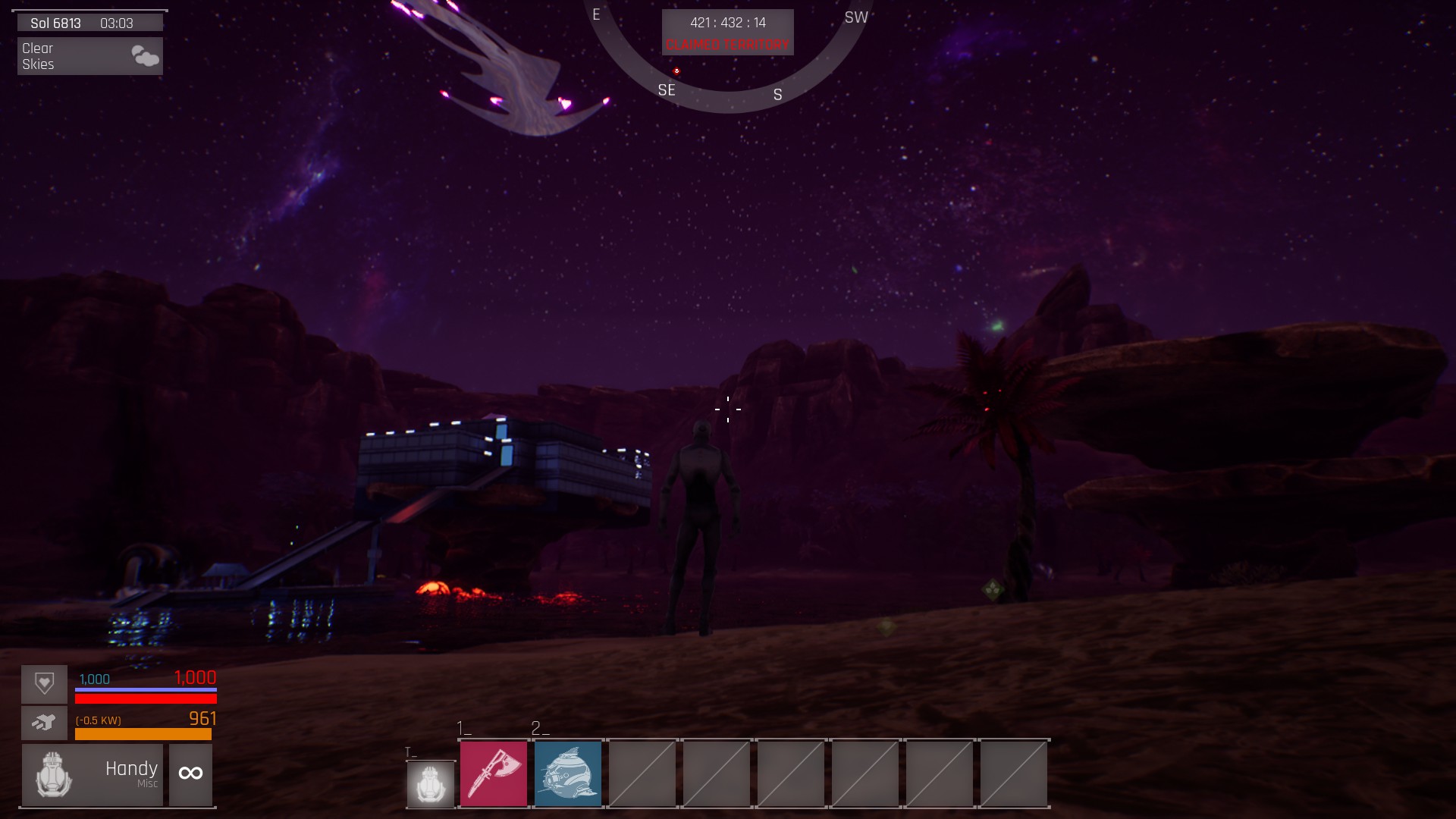 The game world looks beautiful and interesting for the first hour or so, with weird plants and creatures, but I quickly became bored with it. Everything looks the same and there’s not enough variation. The world is pretty small, too, when you compare it games such as 7 Days to Die or Conan: Exiles, though I’d guess it’s about the same as Memories of Mars. When you couple that with the small number of enemy types, it all just feels rather lacking, at least in the current build. 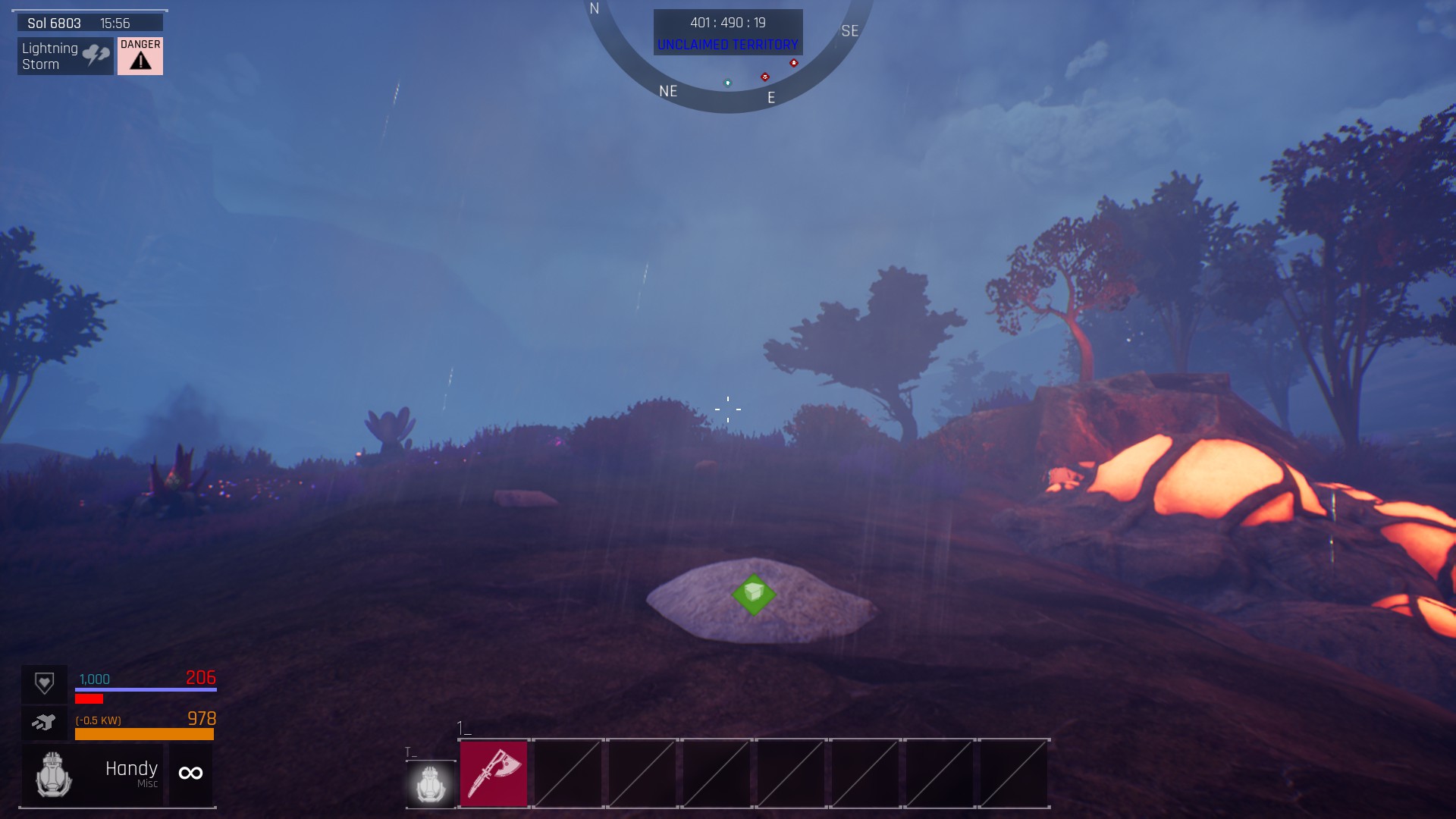 The UI is, frankly, terrible. It’s a mix of ugly, unskinned semi-transparent windows that open over backgrounds that make it impossible to see what they’re saying, and hard-to-use lists of items that can’t be searched and are in who-knows-what order. Have fun trying to find the pistol in that mess of a crafting list! It also doesn’t always function properly either, with some button presses being ignored. The auto/manual selection on crafting stations isn’t explained and doesn’t make obvious sense, and the game doesn’t tell you when your inventory is full; it just stops working properly and leaves you to guess why. The map flickers and waypoints move about when you zoom in and out. I’m hoping all of this is a placeholder, or will at least be revamped. 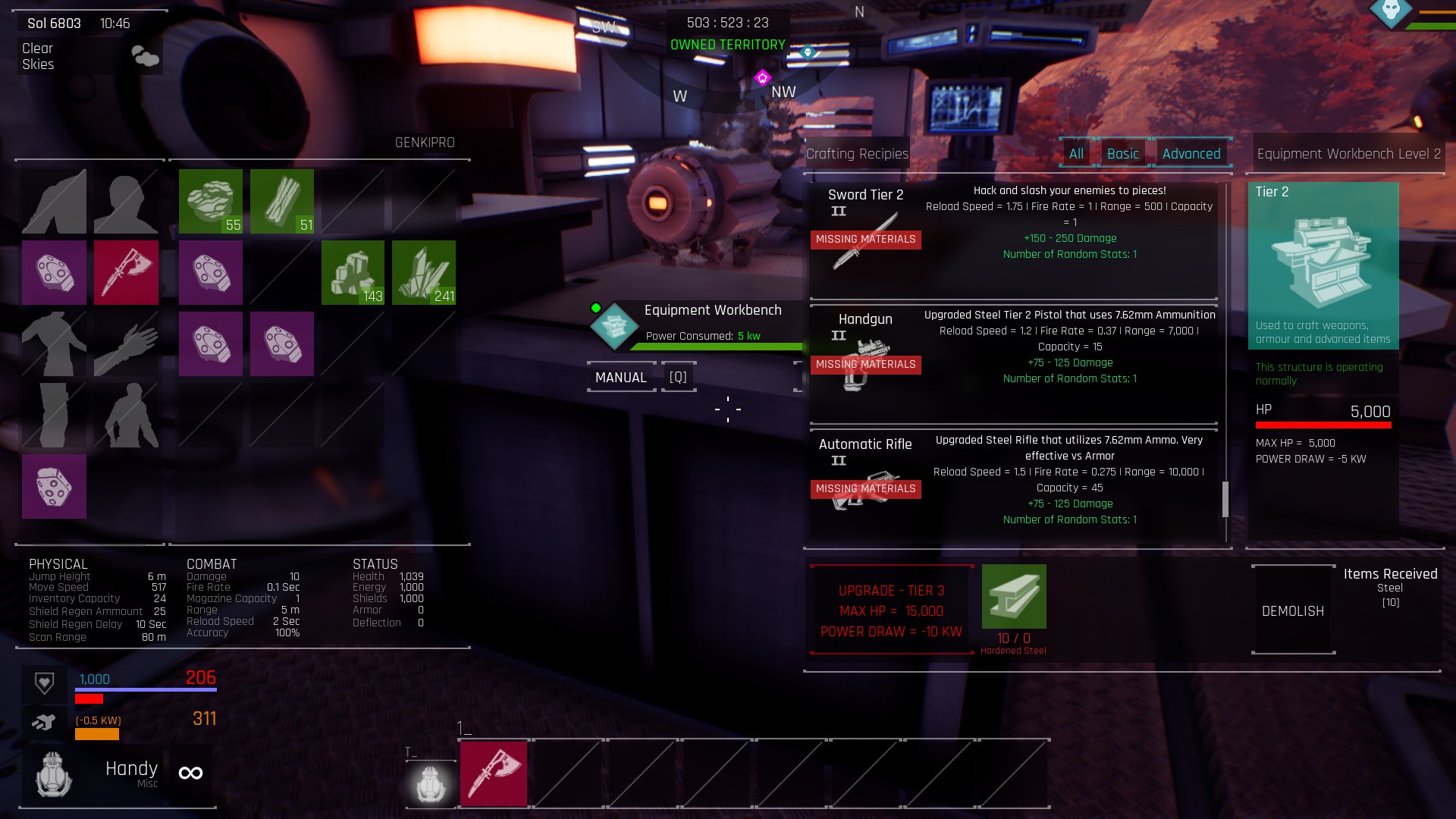 Performance is good most of the time running with everything at maximum on my GTX1070-based laptop, but it occasionally takes a severe nose dive and turns into a slideshow. Quitting the game and restarting seems to fix the problem; I have no idea why.

Sound effects are mostly good, but seem poorly normalised: some are unexpectedly louder than others. The small amount of voice work that’s included is good, if a little overdone at times; the pirates are hilarious! I can’t remember the music at all, so it can’t have been exceptional, but also can’t have been too annoying. 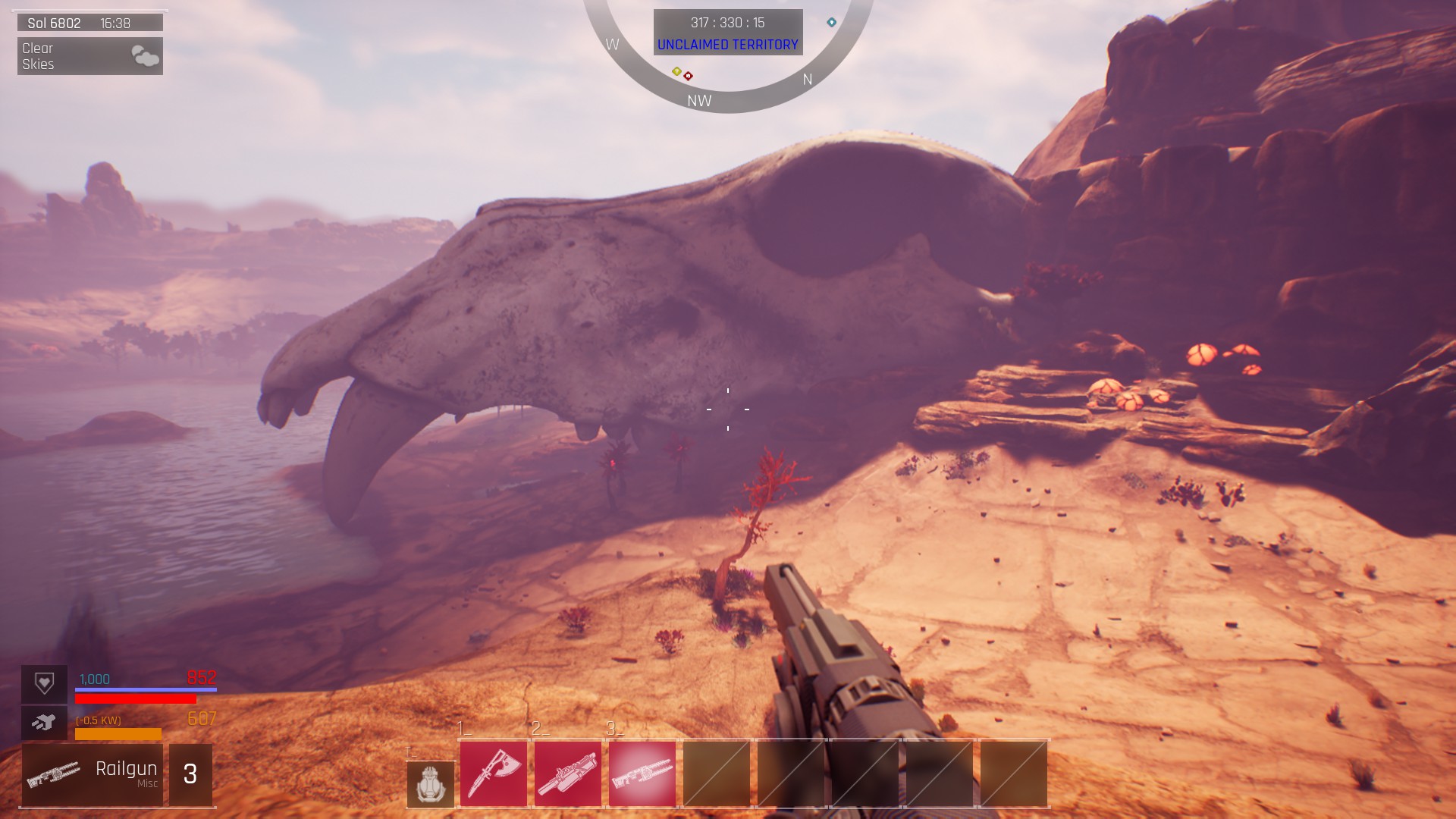 If you’ve played any recent 3D survival-crafting game then you’ll be familiar with the basic gameplay: wander about harvesting different resources, build a base and various crafting stations, and craft tools and weapons to make harvesting, building, and protecting your stuff more efficient. Enemies are indigenous life forms — mostly, but not always aggressive — and random pirates intent on killing you and stealing your stuff. Resources are weird-looking nodes on the ground, which you can either manually harvest or install automated machines to harvest them for you. 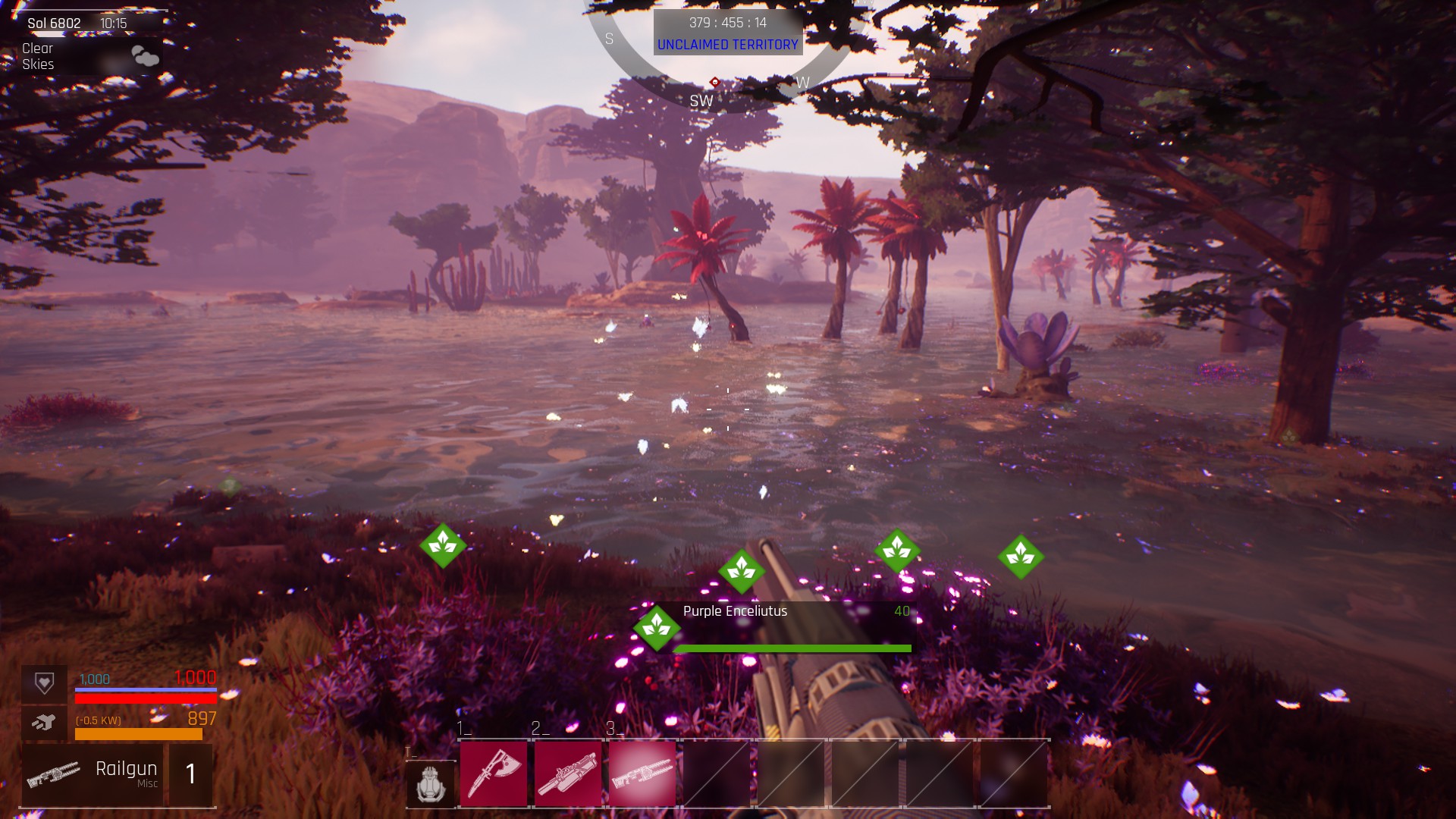 Outpost Zero adds some interesting mechanics, not all of which are very compelling. First are the drones. You start with one and enough materials to manufacture a second. The idea is that these AI units do your work for you. You tell them to build, craft, patrol, etc, and they are supposed to go away and do it. Only they don’t. More often they sit there whingeing about something that doesn’t make sense or simply ignoring your orders. Want a drone to craft your queue of 20 steel for you? No way! If you’re lucky it’ll finish the first one, then complain until you start the second one yourself. Want a drone to patrol? Don’t! It’ll do something stupid and die. About all they do correctly is follow you around, and sometimes (only sometimes) build stuff.

The smallish game world is divided into nine sectors and occasionally you’ll receive a message that there’s a certain type of weather event affecting one or more of these sectors: lightning storms, solar flares, acid rain, …, they’re all pretty cool, but ultimately they all give you only a few moments to try to find cover, and hope your stupid drones are doing the same. 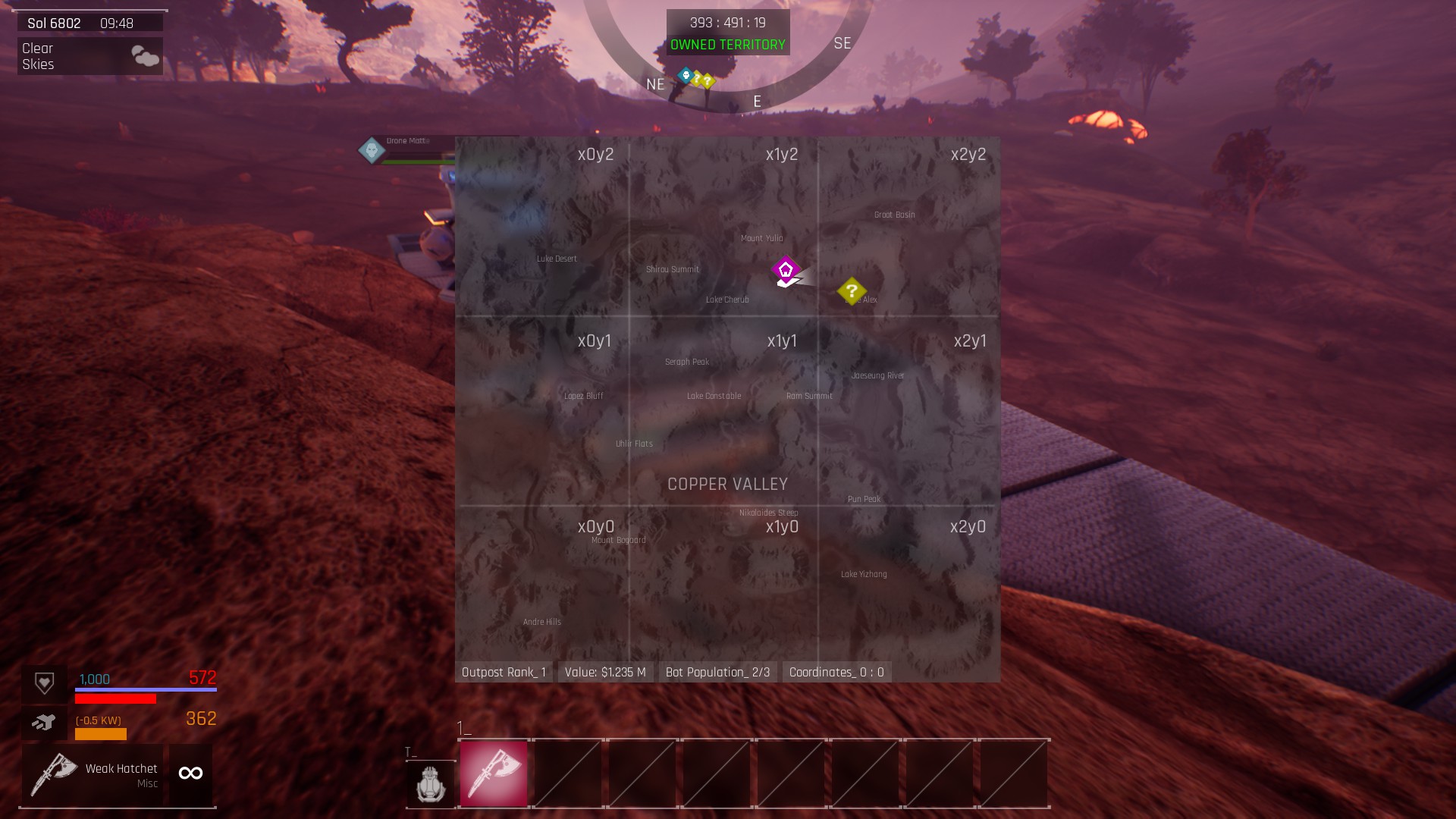 Crafting itself deserves special mention: it’s random! Not entirely, of course, but many designs include bonus ranges. Each crafted item is randomly assigned a bonus within the range, with no way for you to affect the result. So if you want the best bonus, the only way to get it is to craft the same item over and over, which artificially increases the grind loop. 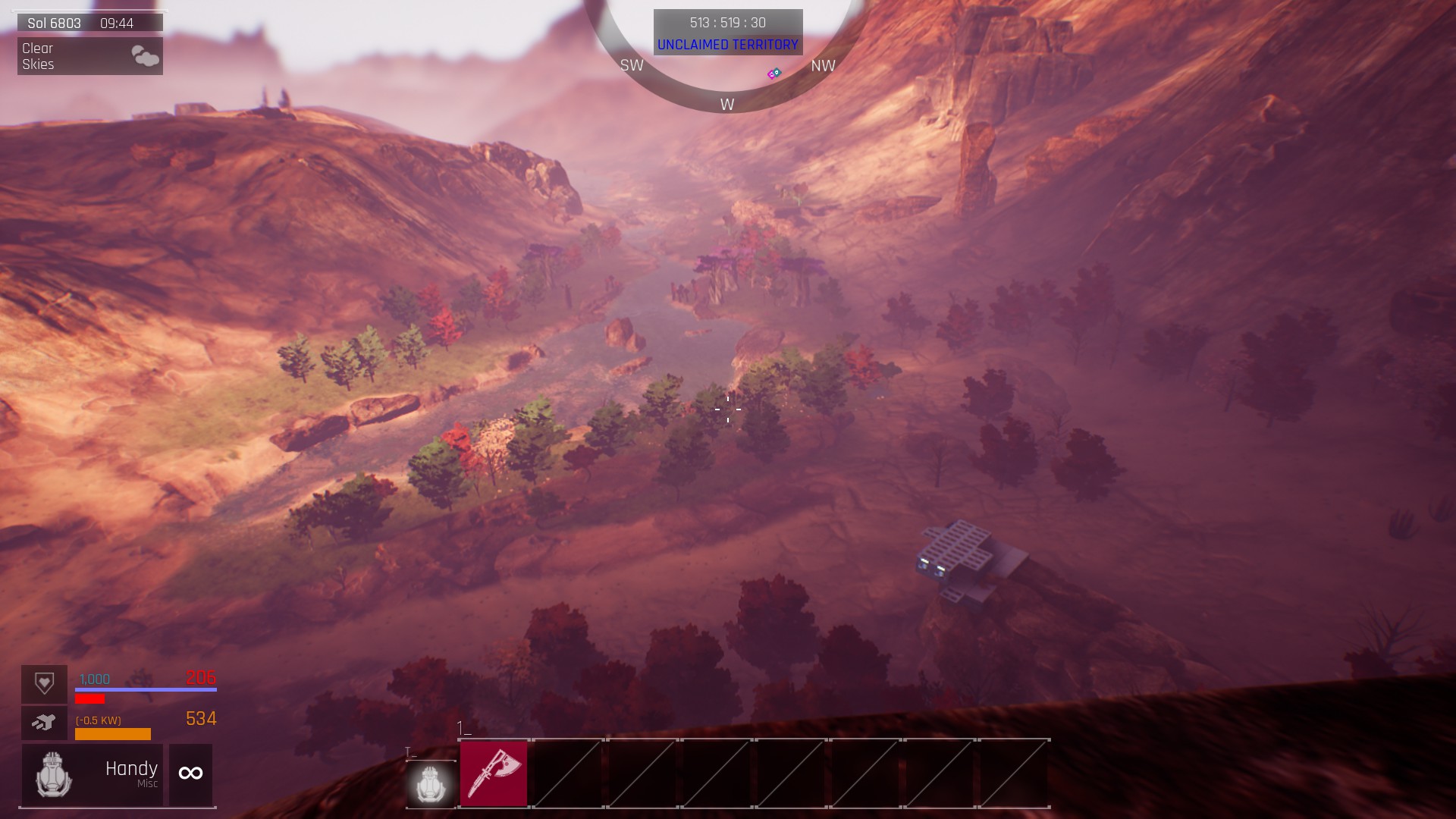 The game takes a tiered approach to crafting and building. You advance by upgrading your control centre and then any associated crafting stations, so for example, a Tier 1 workshop can make a Tier 1 pistol, while a Tier 2 workshop can make a Tier 2 pistol, with slightly better damage and a (random, of course) bonus. What this means is that there’s not actually many different things to make, and that’s a questionable design decision for a survival-crafting game. I’m sorry to say that after making a Tier 2 railgun and finding it was much the same as a Tier 1 railgun, my drive to go on evaporated. Each tier only brings a very small number of new craftable items.

The game is exceptionally buggy, but given that it’s only recently entered Early Access I don’t think it’s useful to list all the bugs I encountered here. Instead I’ll just say that anyone playing it should expect to have relatively frequent CTDs as well as a huge number of less severe issues. So far, at least, I haven’t encountered anything game breaking, though. Oh, apart from the AI. It is woeful. Terrible. Simply appalling. 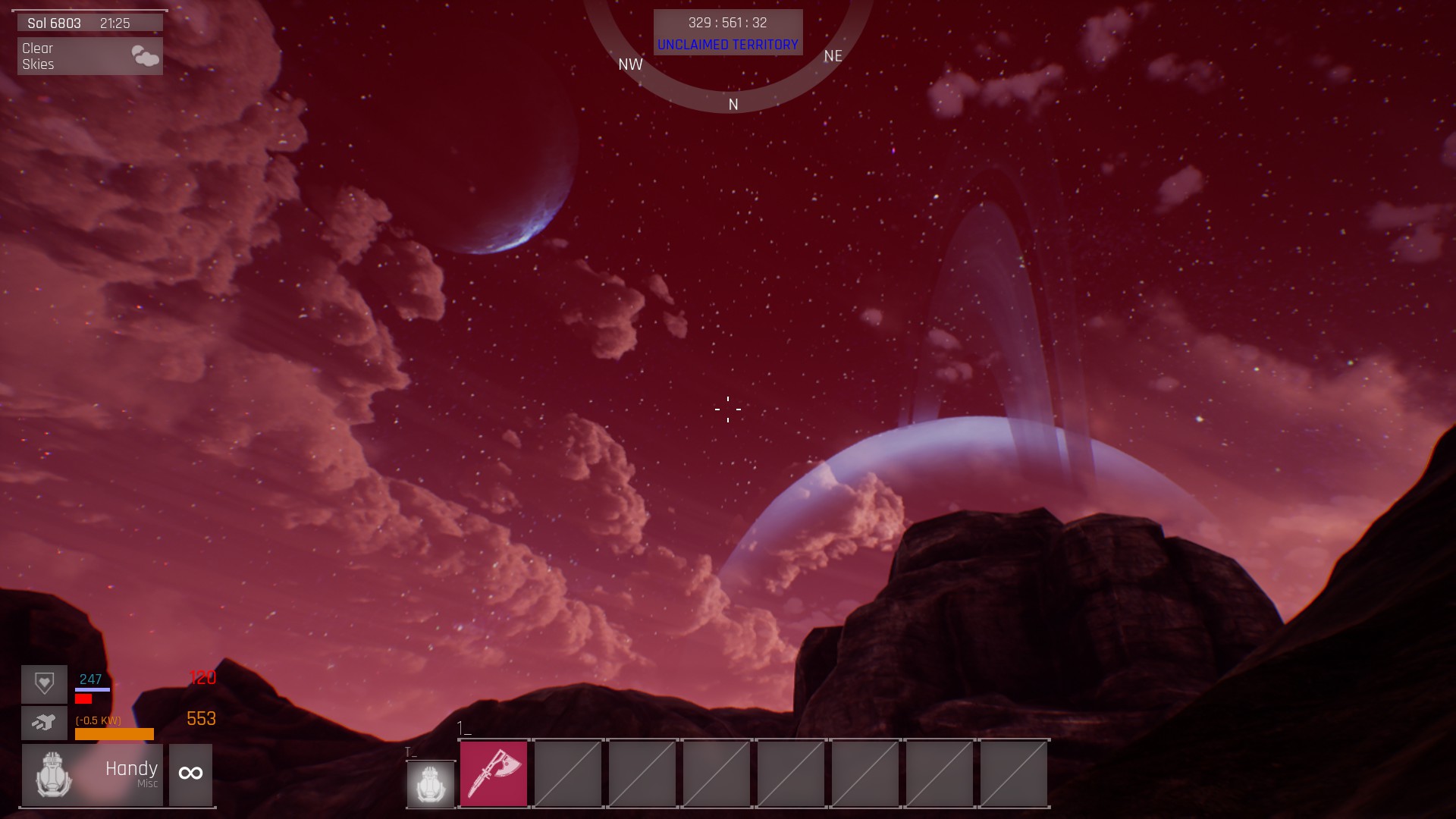 Outpost Zero should be great: survival crafting with single- and multi-player, and the option to host your own server. The setting is interesting, though not yet hashed out, and the graphics help to bring the world to life, at least to start.

It’s plagued with typical Early Access issues, but I’d expect these to be addressed in due course, so they’re not the reason I’m not recommending it at the moment. To me the most important issue is inherent in the game’s design: the core game loop is simply not compelling. The small number of buildings and craftable items are repeated over and over with each tier, which doesn’t make for very interesting advancement, and the random bonuses on crafted equipment further increase the grind. Other issues compound these problems — particularly the astoundingly bad AI — but until there’s more to strive for I don’t think I’ll be playing Outpost Zero again.