Ever wonder what it would be like to defend classmates from monsters, distract your teacher, and play Megaman on a handheld you can’t be seen with at the same time? Look no further!

Dark Souls remaster got you down? Need a quick bump of the old Nostalgic platforming gold to get you feeling like a REAL gamer again? I know! Lets hop into the body of a 6-year-old girl and kick some 8bit pixelated tail!

What!? haven’t hooked you yet? Well if multitasking is your thing, how does juggling several iPhone X’s (I’m looking at both sides of your suspiciously not gorilla glass ass… Apple), trying to keep kittens from wandering into traffic, all while simultaneously avoiding a nosy teacher sound…

WONDERFUL! That’s more your speed… Step right up and grab your preferred VR Strap on (Head Mounted Display) Boi’s and Gurl’s and lets find out what I’m ramblin’ on about!

Gameplay – you acquired the gremlin stick!

ARVORE describes the game as Multi-dimentional, that’s actually quite poignant. The game asks you, the player, to step out of your comfort zone and constantly shift perspectives from a little girl in “real life” to a game character in a 3D world, and then to a pixel on a flat classic game console played in a virtual environment that eventually evolves into a 2.5D action sequence somewhere in between on your desk. Heck, at one point you use the handheld gaming console to play augmented reality Duck Hunt within the Virtual Reality environment. Kplo0bm!

Pixel Ripped 1989 at its heart is a two dimensional platforming game, with some VR environmental & time management mixed in. Let’s break them down into their constituents to better analyze each on their own merits, and then combin them to see if they work as a whole… Epik Wap Battows of Histowy… Two Dee VERSES Three Dee… BEGIN!
(goes to get link, 3 hours gone… Sigh)

• The Third Dimension
In the beginning you are teleported into the body of a 6-year-old girl with a empowered NES powerglove, 2D monochrome (green) handheld gaming console, and a spitball tube in a elementary/primary school. The teacher is always trying to learn you something important and strives to make you pay attention to your studies.

To assist you in the prevention of paying attention are a variety of objects hidden around the room you can interact with to create distractions that will pull the teachers focus off you and on to the object, temporarily. if you repeatedly abuse them, they start to lock out for longer periods of time. This is the “Time and environmental management” aspect of the game. on top of the time management several of the environments and students in them have neat little Easter eggs or interesting quirks to discover further pulling you out of the 2D platforming part of the gameplay.

• The Second Dimension
The 2D side-scrolling game on the handheld feels and plays like a collection of classic games, most notably Megaman/Rockman, with a pinch of Gargoyles Quest. You run or dash through the world with a single arm cannon, jumping and blasting enemies, while avoiding obstacles and using leap pads to collect “bits” that power you up, giving you a less pixelated body. Occasionally you will run into timing puzzles and simple rpg elements, with the obligatory Boss fight at the end of the level.

• Putting it all together
It is your job to both play the game on the handheld, but not get busted by the teacher with it. This means constantly shifting your focus from the game to the room to check the teachers position and focus, or using the ol’ spit wad blaster to get some much needed time to get further along in the Side-scroller. The Console game is refined and fun, and is constantly adding new things often enough to stay fresh. Like Celeste, there are optional “extra difficult” locations that will award you with game cartridges that will unlock secrets, and all the while you have to manage your in game time or be caught, and reset. This makes for a challenging, if not frustrating experience, depending on whether you made it to a checkpoint recently. 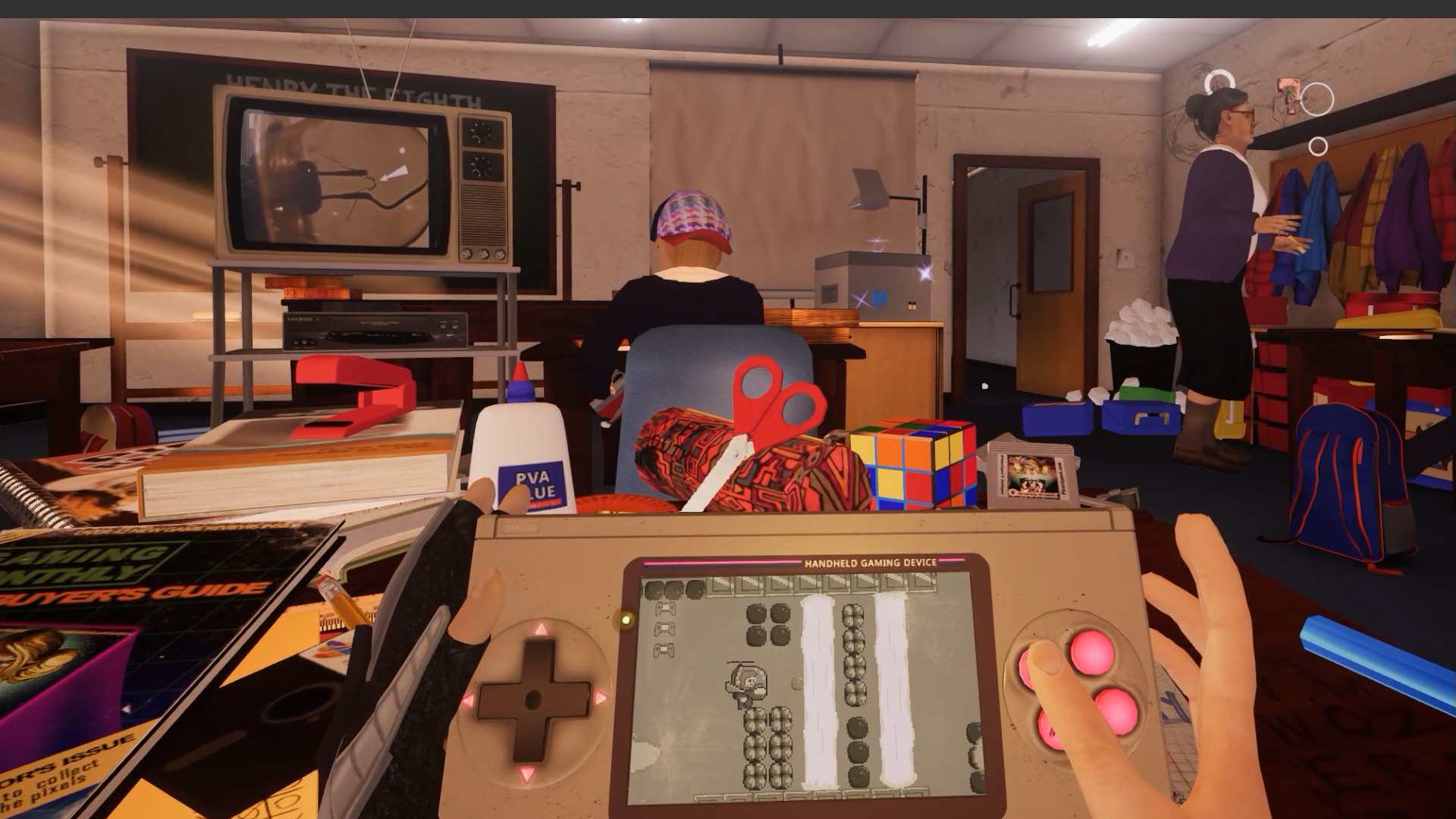 VR, Graphics & Framerate – you should have studied the blueprints closer!

While the games 3D environments and graphics are not amazing by today’s standards, they are fun and for the most part enjoyable; Close attention was paid to the retro look. Every last detail is a reminder of a better, simpler time in gaming. Every last easter egg and a little nod to great games of the past are all visual treat, more than making up for the games less than polished bits. Like… The Animations and models. They are often rudimentary, sometimes just plain bad. But, everything feels appropriate and crafted specifically for this title, nothing feels particularly out of place or grifted from another games assets.

The special effects and retro shader will make old-schoolers feel at home, the nostalgia is real. It’s what the game’s Developers are banking on, and is delivered in spades. This is a double edged sword though, as old-timers and those that enjoy a good throwback will be mesmerized and charmed, I feel the snowflakes and millennials might not get as much out of the experience.

The game runs well and the framerate should not be an issue on the majority of hardware. An issue with the detection of your gamepad may arise, should you try and use something other than an xbox 360/one controller or the vive wands/oculus touch controls.

This title is strictly VR, not VR capable, so you will need an HMD of some kind to play, although a large variety are supported. 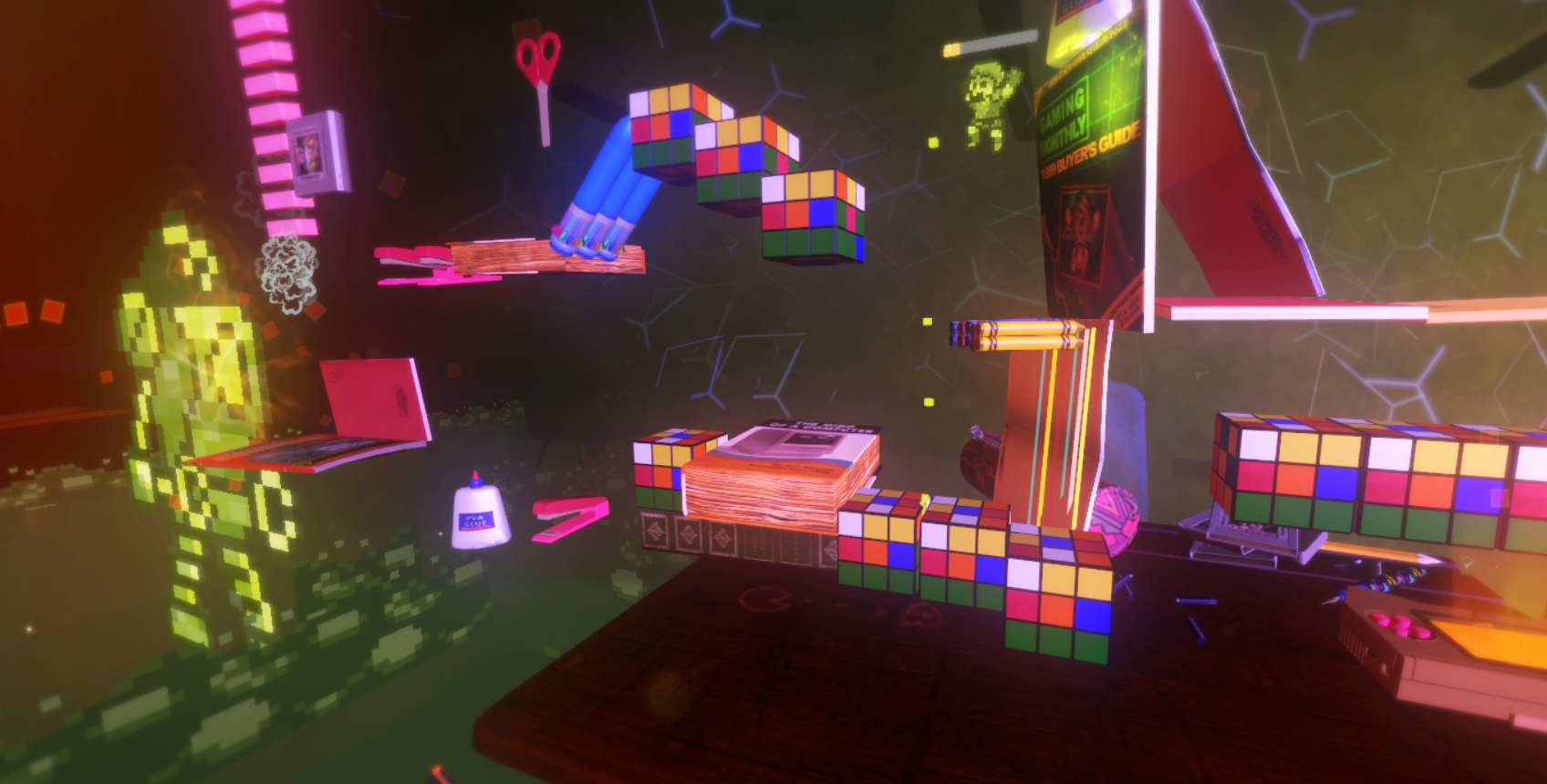 The oculus touch controllers are going to give the best experience, as you can adjust the position of the handheld console in the VR environment.

The Vive wands are also supported and allow for the adjusting of the virtual handheld, but the lack of physical buttons and directional sticks means you are in for a less than ideal experience.
Most players will prefer using an Xbox One controller as the best alternative to the touch controllers, but be aware that this locks the virtual handheld to a fixed position, often requiring an awkward and uncomfortable angle to be used by the neck.

Responsiveness and feel during gameplay are spot on, you shouldn’t feel the lack of proper control lead to a death. 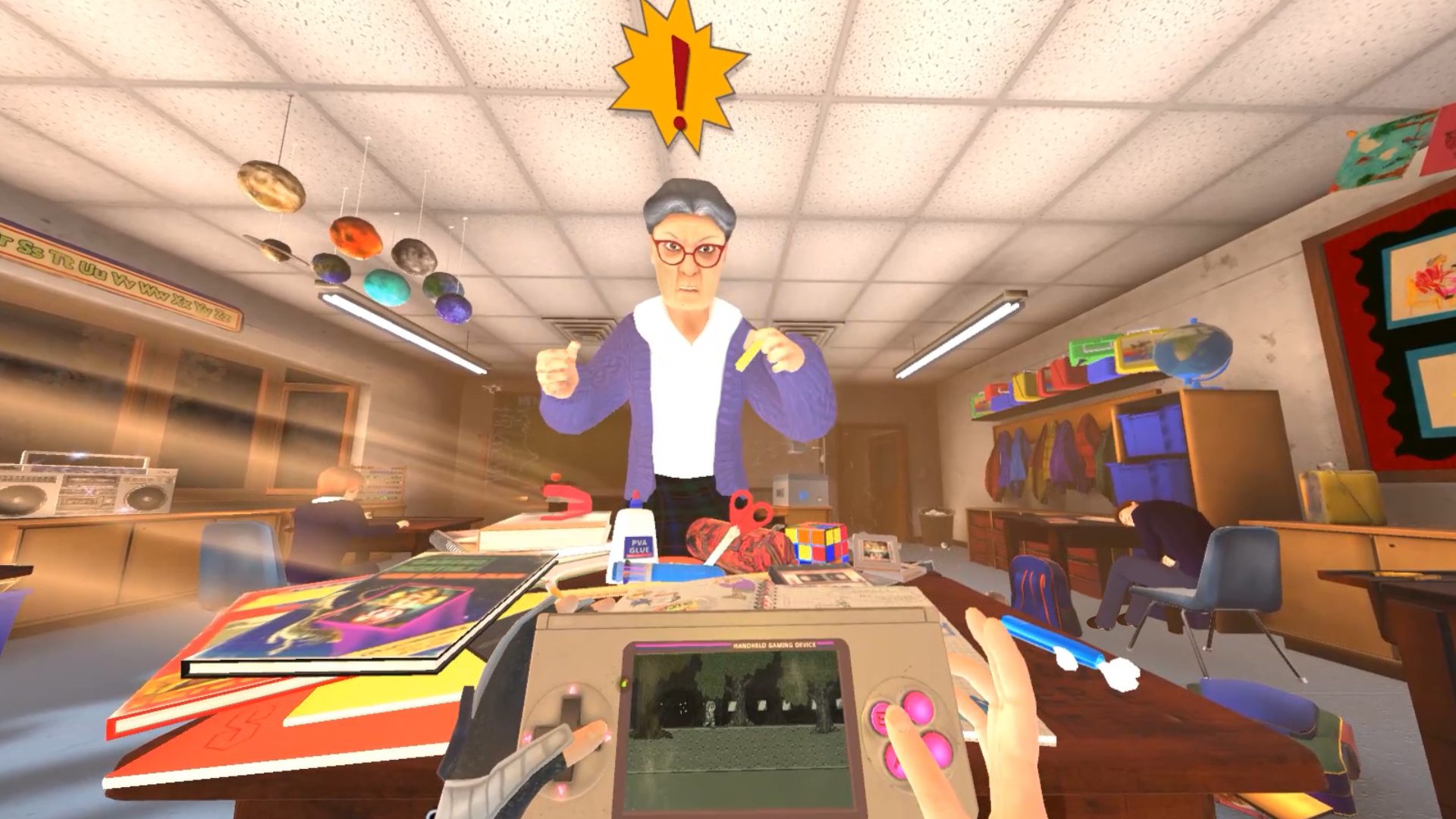 The music, sound effects, and prerecorded dialog are some of the weaker elements in Pixel Ripped 1989. The soundtrack is comprised entirely of 8 bit chiptunes, none of which are memorable or stand out.

This is particularly frustrating, as I am an avid Chiptune and videogame OST fanatic. Games like VVVVVV, FTL – Faster Than Light, Shovel Knight, Overload, and Celeste are all proof a small indie Dev can make amazing soundtracks, if enough resources are allocated.

Lately Music and sound effects have been some of the stronger areas in indie titles so its a little disappointing that ARVORE put so little focus on them. The games music is not bad and does not detract from the overall experience, but had more time been spent on the sound effects and voice-overs Pixel Ripped 1989 would have felt a lot more polished. 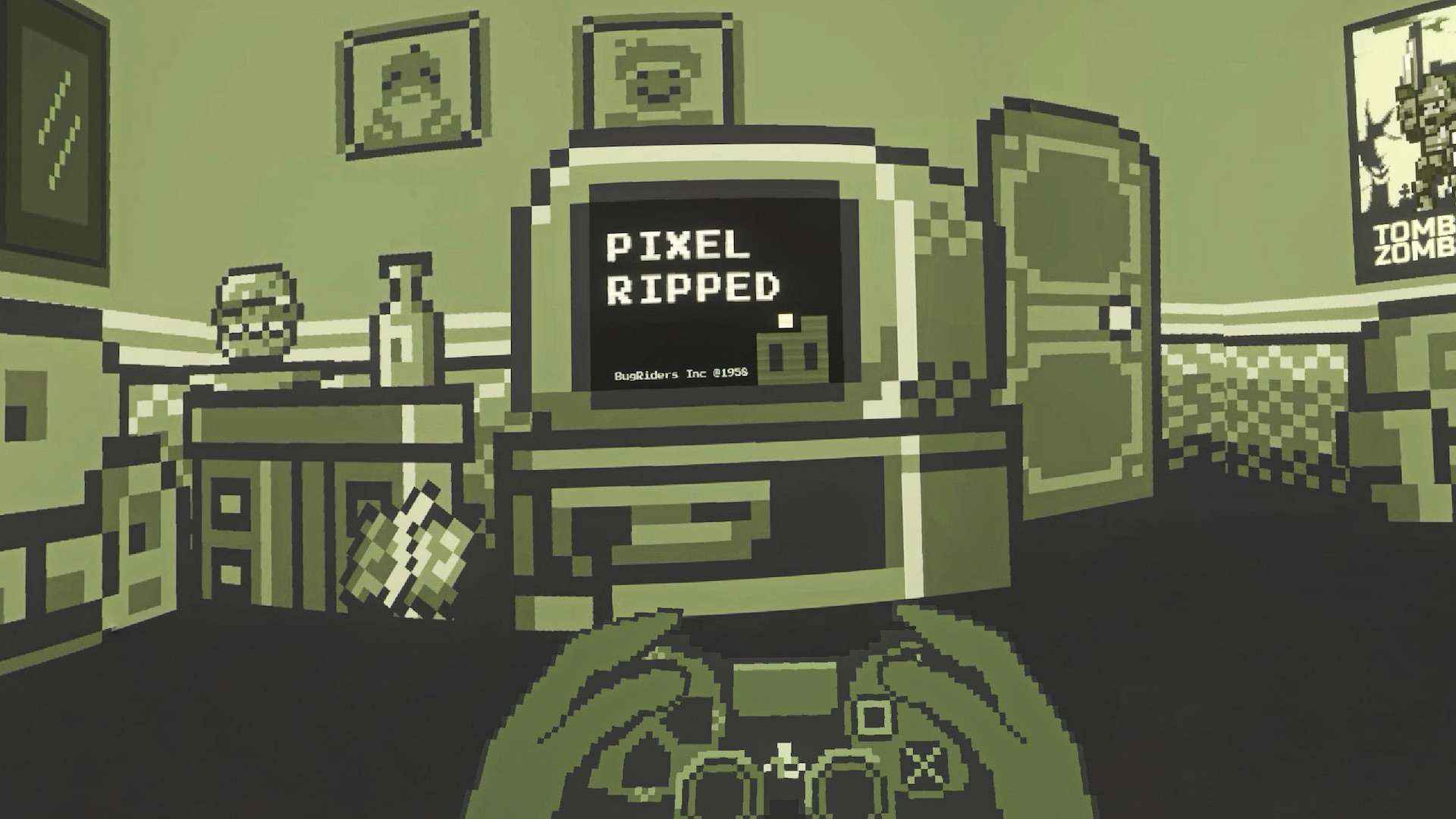 Verdict – The last Metroid is in captivity. The galaxy is at peace…

The Good:
• Art Direction & Retro feel
• Originality of the concept
• Difficulty ramps up just right
• Many VR HMD’s are supported
• Controls options are varied and are responsive
• Consistent Framerate
• Many Easter eggs and nods to great older games
• Oozes nostalgia

The Bad:
• Audio Effects & Sound Track are mediocre and forgettable
• Use of a Gamepad forces you to look down to bring up the virtual handheld

The Ugly:
• The Voiceovers
• most of the 3D Character Models
• majority of the 3D Animations

Pixel Ripped 1989 is an original idea in a sea of copycats, clones, and remasters and this alone is a reason to buy it. It also has a ton of secrets, Easter eggs, and nods to the games of old, this replayability adds a great deal of value. For gamers who have played the old school classics the nostalgia alone makes this worth a buy.

Did you know all the Classic Videogame titles for the quotes referenced in the headers?