Putting the “form” into platformer

It was just a normal day, with the various creatures inhabiting this soft world hanging out together, until a strange green blob came into the picture. However, when that green blob jumped into one of the world trees it began to infect everything. Sharp green and pink crystals started to form over the world trees and, in turn, the areas inside of them. Was it on purpose? We may never know unless all the essences return to the trees and the crystals holding up the vines break away. 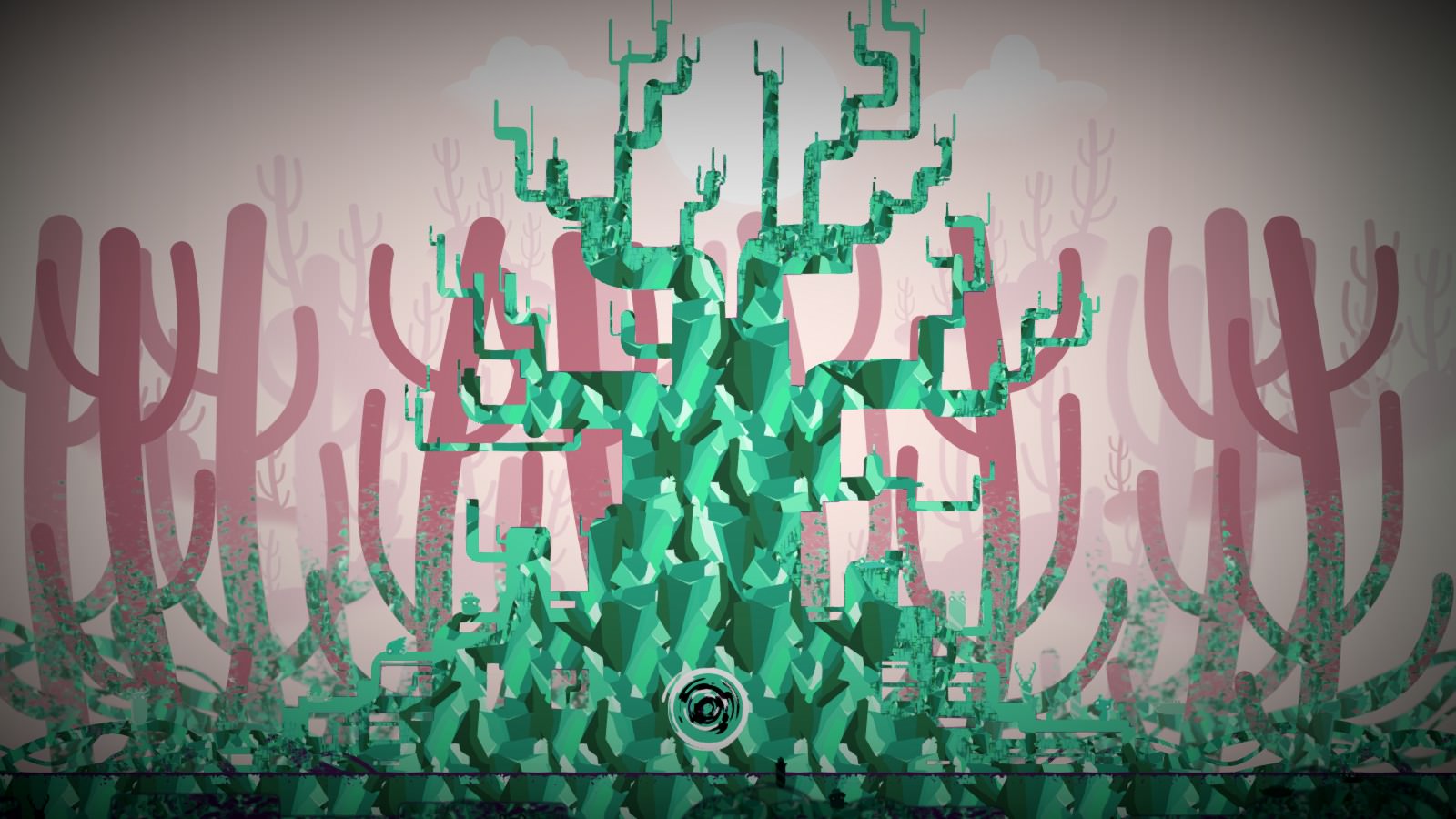 This is where you come in. Seemingly being born just to fix this infection, you play as a small blob named Squish who can jump and dash. That’s not all, the dash can also deform any platform or wall that has one uniform color. You say you can’t reach an essence or another platform? No worries, just find a platform or wall you can deform to get up there! You can also reset the platform or wall just in case since you can only deform them in one way.

No matter how cute and soft everything in this world is, there are hazards around. Sharp crystals and lasers are a constant threat to Squish and if you land on any of them you will die and be put back at the beginning of the puzzle. You’ll have to deform the platforms so you can get around the spiked crystals and block the lasers. Luckily, dying doesn’t reset the platforms so you can quickly get back to solving the puzzle and get to that essence. Don’t assume you can make it a one way trip, though. If you die in the middle of the puzzle with the essence, it will be taken away and placed back where it was. Only when you return to the beginning will it properly be kept and returned to the tree you entered in.

As you progress through, the puzzles will become more complicated. At first, you will just have to deal with deforming the platforms just right. As you get to the other worlds, you’ll soon find yourself dealing with particles which take away your ability to dash, lights that are hell bent on keeping whatever it touches in its original form, and walls that are made up of solid crystal. Each of these have their own work-around and the game does a good job in allowing you to figure it out. For example, some lights that will reset the platform can turn them into trampolines if you deform it down into the light.

I wouldn’t say that Semblance gets harder though, as it holds a lot of easy puzzles once you know the mechanics of everything there. There are a couple that are hard to figure out how, and make you feel dumb when you do figure it out, but most are pretty easy to get through. In fact, the most I had trouble with was being precise. You need to deform the walls and platforms enough so you can land on them, but not land on the crystals or lasers. If you have to use the platforms as trampolines, you have to have a good sized dip in it to propel yourself far enough and in the right place to be close enough to dash to the essence or to another platform. This in particular can be get hard if the reset light is being controlled by a creature and you weren’t fast enough to deform the platform below (or above) you.

If you get stuck or become too frustrated, you’re not barred from continuing on to the next puzzle. You can easily go to the next one in that level or go to a different level to solve those. Interestingly enough, you’re not even barred from the different world trees. I didn’t notice till after I finished a playthrough, but the only thing stopping you is knowing what was introduced so far. You will still have to get all the essences, but you can do it in any order you wish. Players just need to look for the tree that is missing an essence to find the level you need to go back to.

There are a couple of collectibles you can find while doing these puzzles as well. You can find wall paintings hidden around, though some are in your path which vaguely hint towards the story. Shrines, which are shown on the world trees, are the well hidden collectibles that, when found, will light up to reveal its pattern. Lastly, there are green crystal flies that are pretty easy to find, but hard to get. These serve as constant challenges as you can’t just touch them, but break them by dashing. I’m not sure if the game counts how many flies you destroyed (though there has been a discussion about adding an achievement for killing all of them), but what ending you get is dependent on whether you get all the collectibles or not. 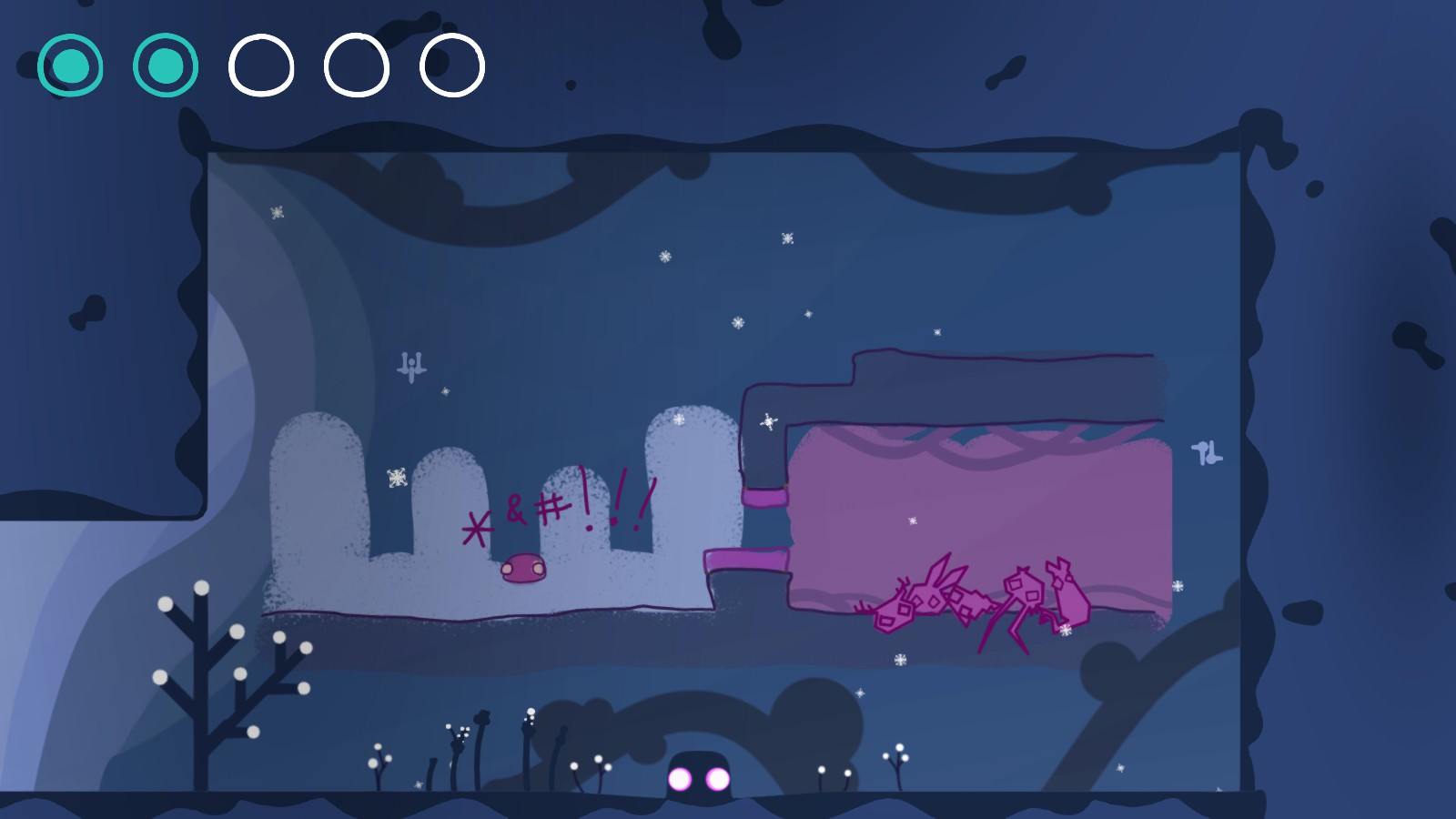 Right after finishing my playthrough, a patch was released to fix a couple of problems that players were experiencing. The main bug that I ran into was getting stuck inside walls when trying to deform them, with the only way out being to either reset the wall or trying to wiggle out (luckily I was never stuck so bad that I needed to restart the whole game). After the update, I didn’t run into that problem as frequently, but it still somewhat feels like it wants to get stuck. For the achievement hunters out there, the Polymorphic achievement was also fixed.

Semblance is an adorable puzzle platformer that ultimately made me wish there was more to work through. Most of the puzzles are easy, yes, but that’s not an entirely bad thing. There’s always a time where you just need something to relax to and Semblance is the perfect game for that. From the calming music, to the cute creatures, to the soft look of everything, and the easy to learn mechanics, it’s hard not to take a liking to it.