Moss is like a fantasy storybook come to life and turned into an action/puzzle platformer. It’s also exceedingly beautiful.

Moss is a 3D platformer with action and puzzle elements, designed for, and only playable in, Virtual Reality.

In Moss you play Quill, an energetic field mouse who’s rather fast on her feet and handy with a sword. One day Quill finds a magical glass that summons a “Reader”, a much larger being with the ability to control the world around Quill. You also play the Reader.

Guiding Quill home, you meet Uncle Argus, an old mouse warrior, who is surprised and scared when she reveals you. He tells her that the magical glass that summoned you is very dangerous. Setting off into the night with nary a word, Uncle Argus only tells Quill that she can’t leave the house until he returns.

I was a little disappointed with Moss to begin with. The game started in a sort of church-like building, with a book on a stand waiting for me to read it. Using the controllers I reached out and turned the page, and the story began, with a voice actor introducing the background of the world. It was all a bit ho-hum.

Once the introduction was finished, though, I found myself floating in the beautiful, lush forest of the Clearing, watching Quill as she foraged about and uncovered her magical treasure. Then she looked up and saw me, and waited for me to do something, and I looked down and saw myself reflected in the gently flowing stream. It was at this point that I realised that this was the best-looking VR game I’d played. Screenshots don’t do it justice. 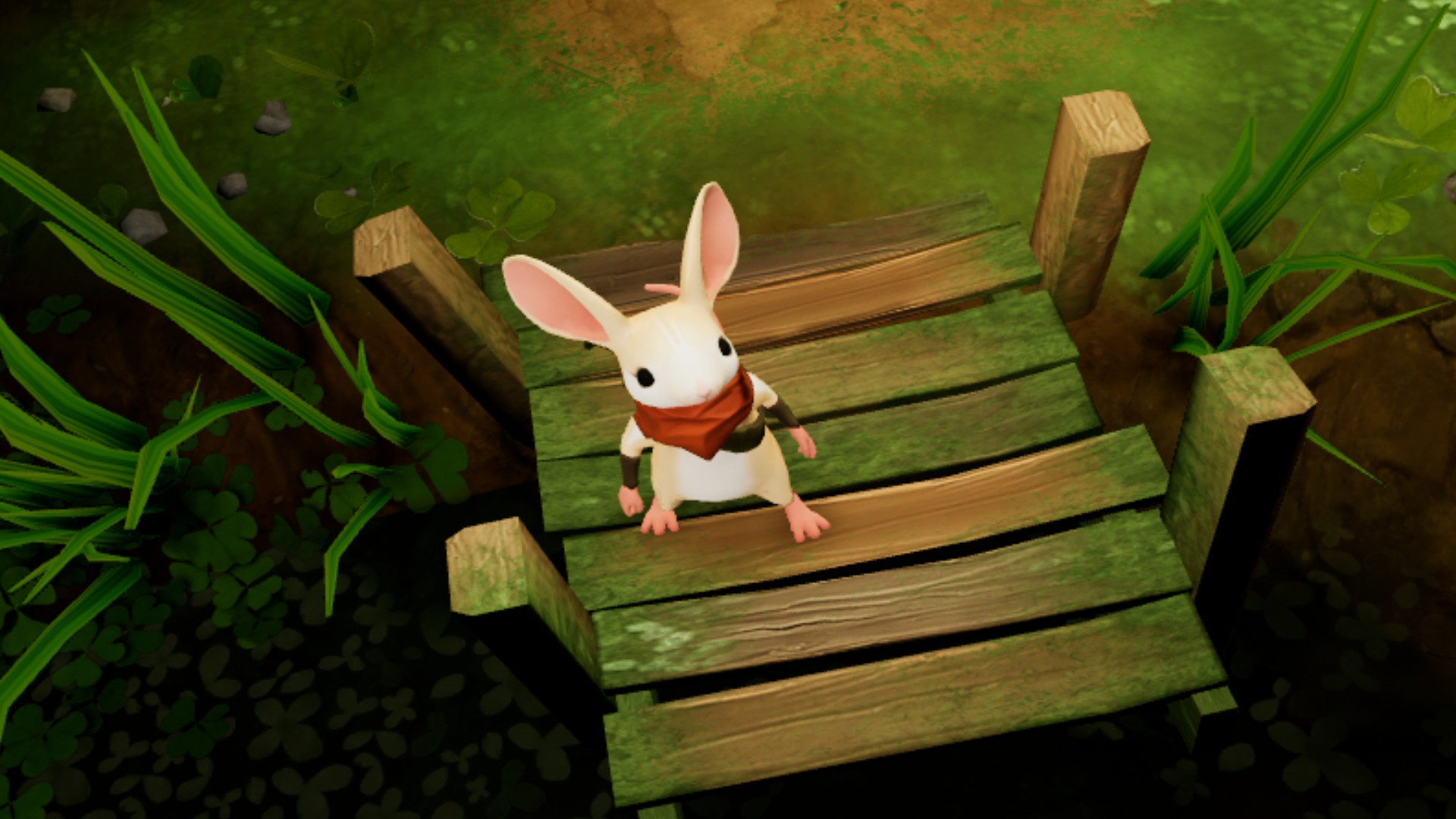 While the game is made up of a number of somewhat-disconnected screens, the world they create is wonderfully realised. So much detail has gone into each area, I still find myself simply wanting to look around and watch the world go by — something which makes the lack of manual save points even more frustrating. Quill and the other mice in her community look simply amazing, with detailed models, beautiful textures, and realistic, but also fantastic animations. The game perfectly presents the feeling of watching a living, breathing world inhabited by tiny creatures. 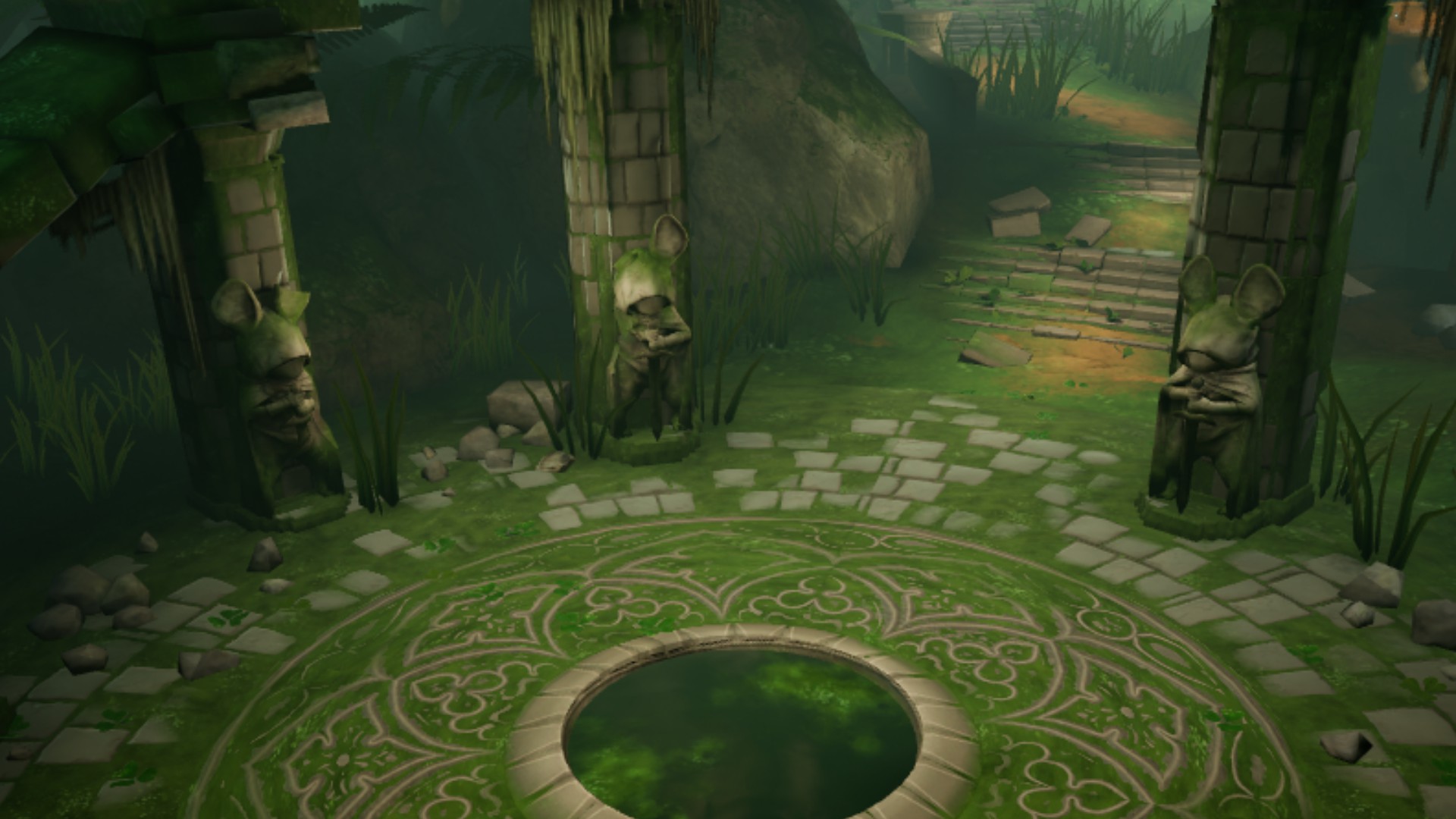 Music, too, is wonderful, and sound effects are vibrant and suit the game perfectly. Voice work is limited to the book-reading sections between each major area change, and I have to say that the voice actor didn’t do a great job. While the feeling of someone reading a children’s book was well realised, I found the voices annoying enough that I wanted to skip through these sections quickly, for the most part.

Performance was fine on my GTX1070-based gaming laptop. 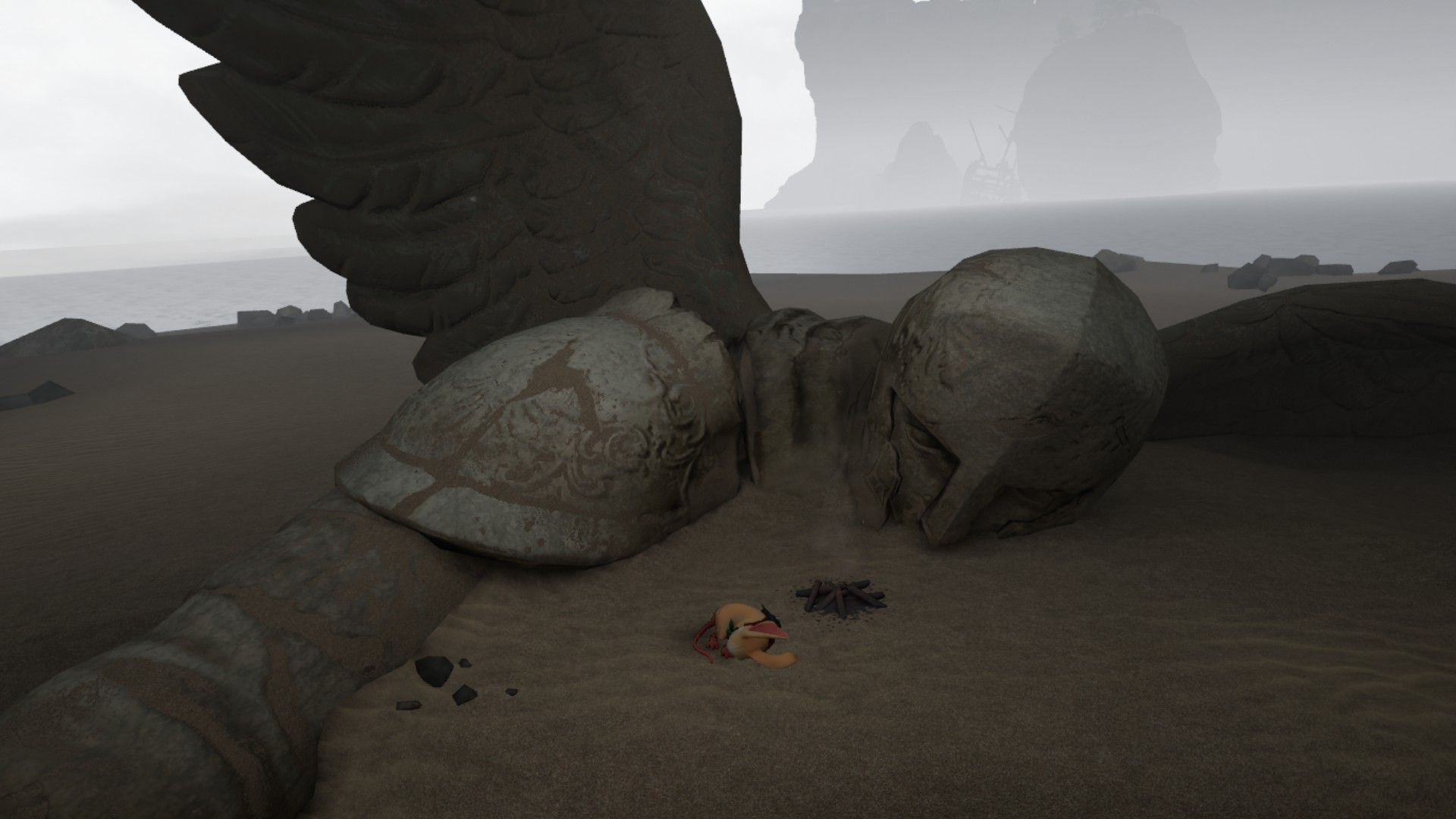 Moss is essentially a 3D action platformer with some basic puzzles, most of which are related to moving or rotating special glowing platforms. You play both the protagonist, Quill, and the Reader, yourself, and I thought this dichotomy ruined the otherwise fantastic sense of immersion that the game provides. I would have been much happier with more to do as the Reader, indirectly signalling for Quill to proceed, rather than having direct control over her. I also think that would have removed some of the game’s frustrations. 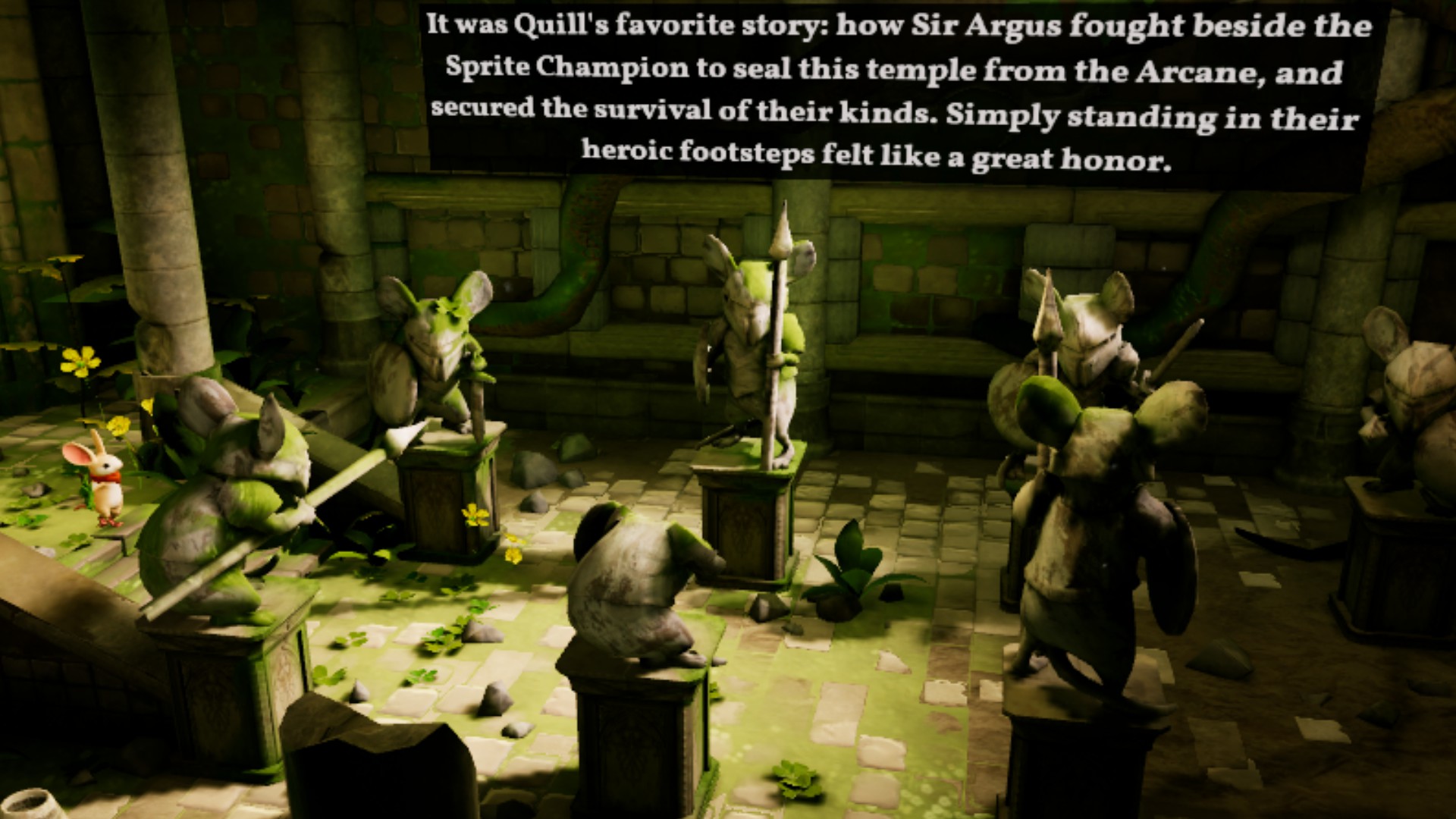 The game is fairly short. I’ve taken my time with it, mainly because of control issues, but I’ve seen others have completed it a handful of hours. It’s made up of a number of small set-piece style levels or screens, each of which typically has a platforming puzzle to solve, enemies to kill, or both. Puzzles tend to be mostly the same — drag this or rotate that — while also controlling Quill in typical third-person platformer fashion, and combat is fairly repetitive, though the use of the Reader’s glowy hand powers to help is a nice touch. There’s a reasonable sense of progression as your make your way through the game, but after the first couple of hours I found it a bit of a hard slog, fighting more with the game itself than Quill’s enemies. 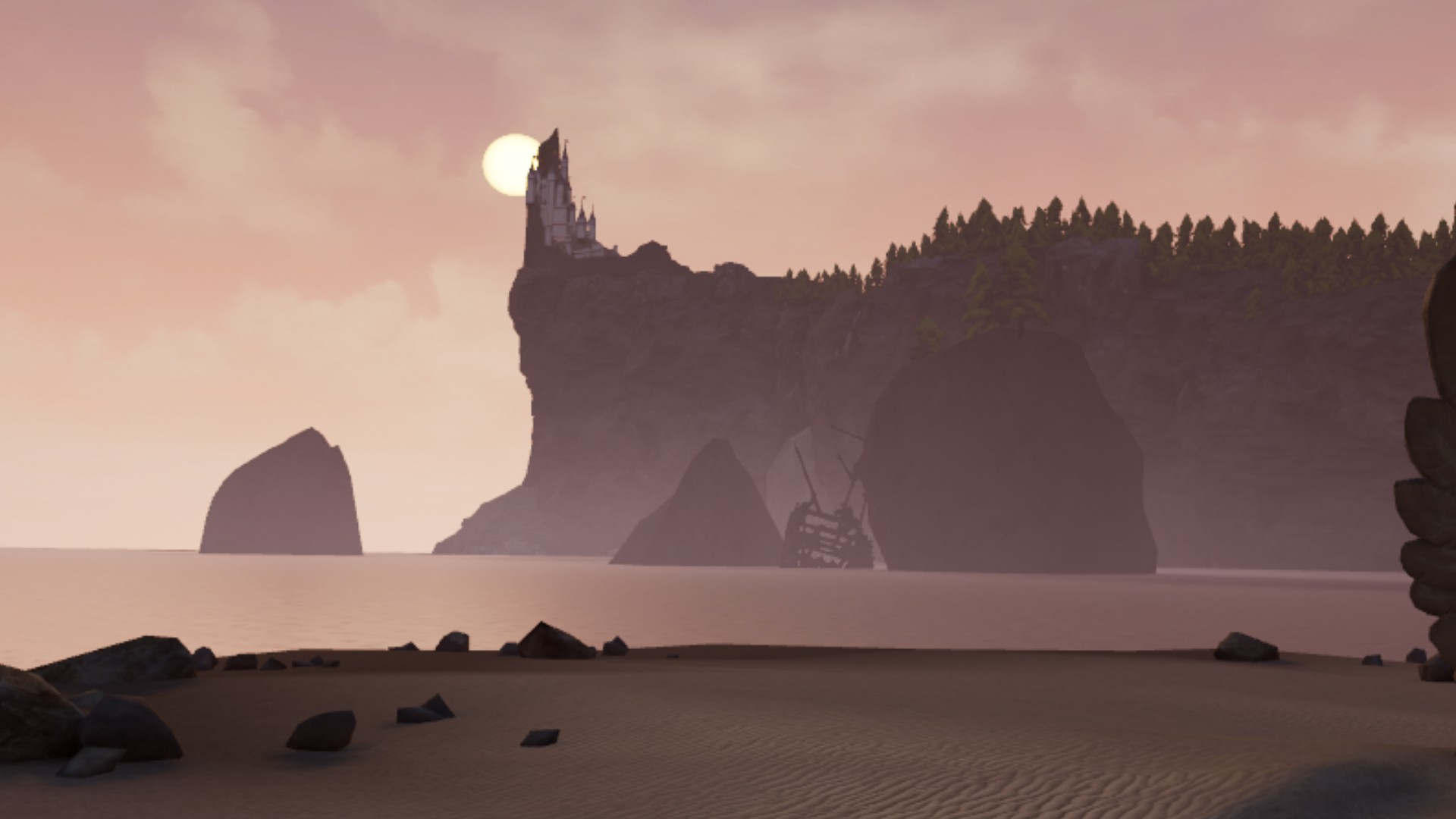 Beyond some occasional technical weirdness, the game’s limitations become evident after only a relatively short time. First, there are no manual saves; it’s all checkpoint-based. If you want to go back and try to get a scroll or even just look at the pretty graphics a couple of screens before your current location, generally it’s just bad luck. You can’t! You can only restart each ‘chapter’ or resume from your previous position. Some of the puzzles aren’t great, either. On one screen shortly after the first boss I found myself trying to jump onto a ledge that was right in front of me. Quill could jump on one right next to it fine because it had the ‘magic’ scratchy-looking texture, but not this one, even though it was the exact same height, distance, etc. It ruined the immersion a bit; there’s no logical reason why she could only jump on the ledge the developers chose and not the one that I did.

Controls are wonky, too, and were the main reason I still haven’t finished the game. I thought it was my hacked-together VR rig — and I’m still convinced it’s much harder than it should be because of this — but seeing reviews from HTC Vive owners, I suspect there are actually problems with the core control scheme, too. Quill will sometimes move of her own accord, and camera angles, while changeable by looking around, do also tend to make jumps a bit hard to judge. I also found Quill’s inertia and friction a bit off; why is the ground so slippery!?

Let me say straight up that Moss is the most impressive looking VR game I’ve played so far. It’s worth checking out simply because of that.

Okay, now that’s out of the way, let me tell you why I didn’t enjoy it as much as I thought I would.

Moss is a perfect example of style over substance. It’s short and its gameplay, while interesting because of the interface, is actually fairly simplistic, even bland in places. The game’s premise is immersion: it draws you in right from the start, when Quill looks at you with wonder, and you glance down and see yourself — a floating mask — reflected in a stream. But then it takes that sense of immersion and shatters it. Why am I controlling Quill AND myself? I kept wondering. Here are my glowing hand-thingies, which I can move around to change Quill’s world and allow her to progress, but why, then, do I also control her? For me the wonderful sense of immersion that the game produced was all but destroyed by this. Why is Quill prompting me for a high five after solving a puzzle when I both controlled the world and her to do it? The realisation that I was giving myself a high-five was too much.

But the game looks and feels SO darn good. The set pieces are phenomenal, like a sprawling fantasy doll’s house come to life. Quill is amazing, too; her animations and reactions are so lifelike.

So I heartily recommend Moss as a VR experience. As a game, well, if you like 3D platformers and you don’t mind fiddly controls and nonsensical platforming restrictions then it’s probably worth a look from that point of view, too. Just bear in mind that it is very short for the price.