Blood Waves is an uninspired TPS and tower defense mix which lacks content and feels rushed. It gets stale faster than leftover bread in summer, and is just an overall repetitive game that I would not recommend in any way.

Blood Waves is a third-person shooter and tower defense mix that will have you survive progressively more difficult waves of enemies. Your character, who I will refer to as Cara Loft due her striking resemblance to Tomb Raider’s heroine, will have to slaughter wave after wave of zombies coming from all directions, upgrade her arsenal and abilities, and purchase new defensive structures such as barricades or turrets to help her in this endeavor. The game doesn’t have even a hint of story, you are just thrown inside this gothic-ish ancient temple without reason and forced to fight zombies, and while a story is not always necessary for this type of gam, just a hint about it would be appreciated for sure. Overall, I have the impression that Blood Waves starts off with a good concept, wave defense with structure building, a bit like the old Fortnite (much less complex tho), but then lacks in many fields as we will see further in the review.

General Gameplay
Your objective in Blood Waves is only to survive the zombie invasion, with gameplay structured in progressively more difficult waves. Between each of them you will have the chance to replenish ammo, repair defenses, buy new weapons and towers, upgrade your perks and get better structures in a shop conveniently placed behind a moving statue. The shop contains all you need to face the invasion: choose from eight different weapons, ranging from SMGs to assault rifles to sniper rifles. Then there are perks, passive upgrades to improve dear Cara, such as more HP, better health regen, less damage from a specific enemies and so on. There are around 20 of them with multiple levels each. Perks cost Perk points while weapon upgrades cost upgrade points (you get 1 of each every completed wave), and not money, that are used solely for ammo, new weapons and new structures.

What you actually have to do outside of the shop is build your defense, using barricades to slow zombies down, turrets to help you kill them, and static traps to kill large numbers of them if placed strategically. Of course you can ditch building and just invest in weapons and perks, but that will involve a lot of running and kiting around and frankly, that would take away half of the small amount of content offered by this title. The building system works well enough, it’s a simple select-and-place system a bit like Rust or other similar games. One thing that is absolutely hideous is the fact you actually cannot jump over your own barricades, making it very difficult to reach the frontlines if you need to do repairs or build other stuff and barricades are in the way.

Buildings cannot be moved or sold, so if you place something the wrong way, you will need to wait for it to get destroyed to position it again…after BUYING it again! Money will be a bit of a problem in the first five or so waves, then the zombie numbers increase a lot and you will make more than enough money from them. I had in fact a surplus of money at wave 16 or so, since there is a limit to how many turrets and buildings per type you can build at any time in total.

Overall, the gameplay of Blood Waves (barely) works, but is very basic, lacks a lot of content you would expect, has several quality of life problems, and feels unfinished and clunky. This is also confirmed by the game being in version 0.6 when it’s OUT of early access and there is stuff coming soon for it in the shop… something was a bit rushed maybe? It just gets repetitive and stale after only a few hours.

Combat System
Combat here is a generic third person shooter experience, but is impaired by several defects. First off, the aiming suffers from some sort of “acceleration” that cannot be disabled, and this makes aiming more inaccurate for no reason, then some weapons such as Assault Rifle have a completely ridiculous recoil pattern that makes them borderline unfeasible, while others barely have some. Flamethrower Turrets spit out immense torrents of flame that not only damage YOUR turrets, but obstruct visibility and will make you fail to notice dangerous enemies, such as Suicide Bombers, that will turn your defenses to pieces in seconds.

The enemy types are a few: normal zombie, greater zombie, acid zombie, electric zombie, explosive zombie. That’s it. The only real threat is the explosive type, since it instakills any defense in an area. You have to systematically watch for these and take them down personally, the rest can be handled by towers quite effectively. Weapon balance is more or less okay with the exception of the M134 Minigun which is the definitive weapon and outclasses any other miles away. Static traps such as Pillar with Chainsaws and Rolling Spikes (i don’t remember the actual names), are expensive but basically useless since exploding zombies will instakill them and since you can’t see those half of the time because of FLAMETHROWER FLAMES, well, it’s wasted money.

Content
The game content is very limited with just a few enemies, weapons, and perks. In about 2 hours of gameplay I already had all the weapons, most perks, most upgrades, and basically was repeating the same “explosive overwatch” every wave.

Balancing
Balacing is fair, the gun turrets could use a bit of a buff, explosive zombies should not 1-shot everything but maybe 2-shot, some weapons are completely useless because of how recoil is done, and the M134 is overpowered especially if upgraded.

Challenge
If you build a decent defense with barricades forward, turrets behind and get the right perks and upgrades, the game is not very challenging and is just a matter if killing exploding zombies before they reach defenses. 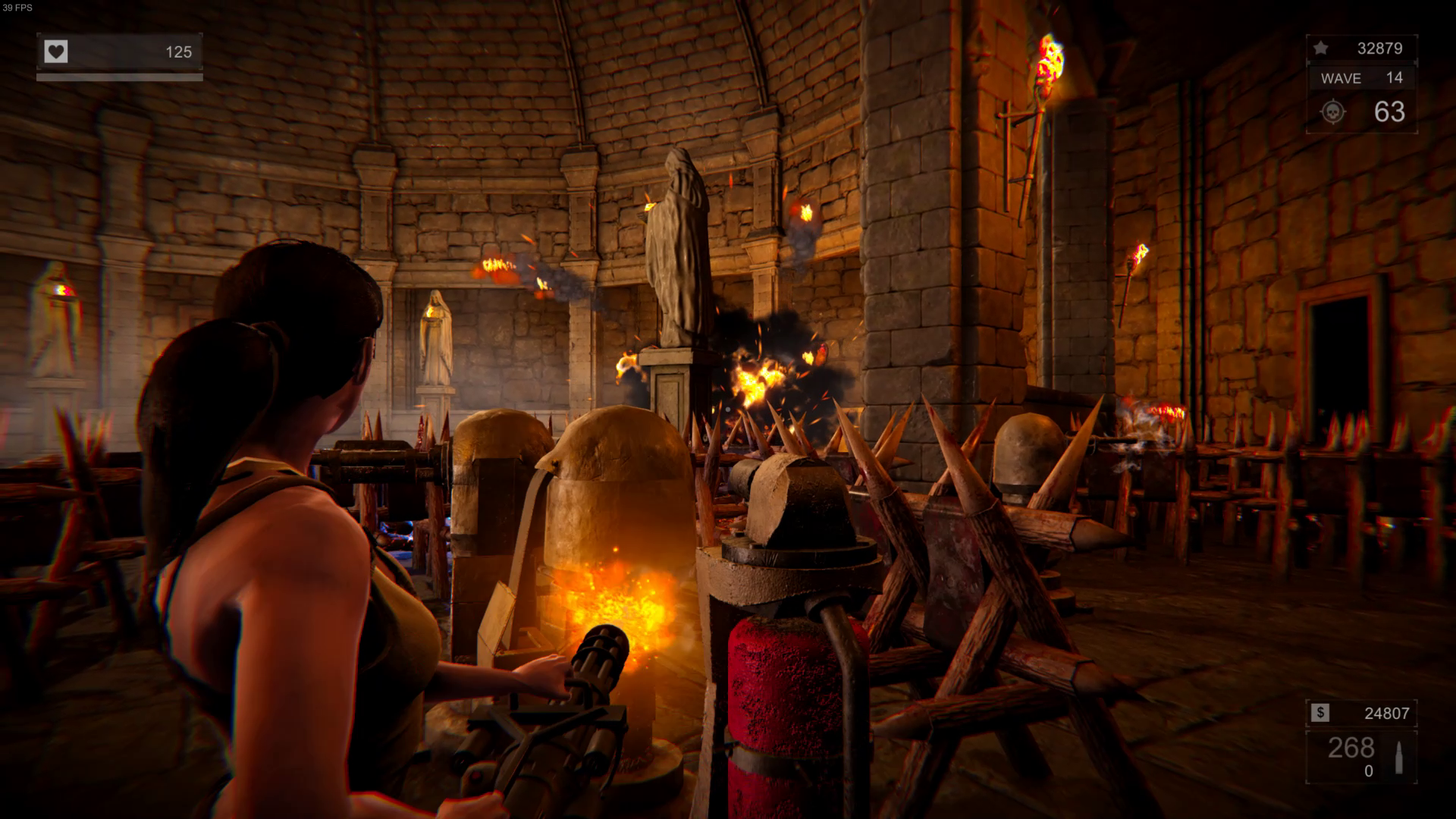 Graphics
The graphics are quite dated for 2018 standards. Animations are clunky, textures and models are of mediocre quality, the environment looks like a generic Unity asset with a bit of editing, and overall it feels like a game that perhaps came out 4-5 years ago. Also, it needs more dismemberment and gore.

Sound
The soundtrack is one generic heavy metal track repeating over and over, united with the average quality sound effects of battle, it becomes an infernal cacophony that will result in an headache before long.

Performance
I had to tweak the game with external tools to have a 60FPS cap, since VSYNC does not work I got 200+ FPS and this brought my GPU to be 100% all the time, which is not good at all. Other than this, runs well enough

Quality of Life
Several issues here. Flamethrowers impede visuals, you cannot move buildings once placed, or sell them even, some weapons are unusable due to weird recoil patterns, aiming feels weird and not precise at all. 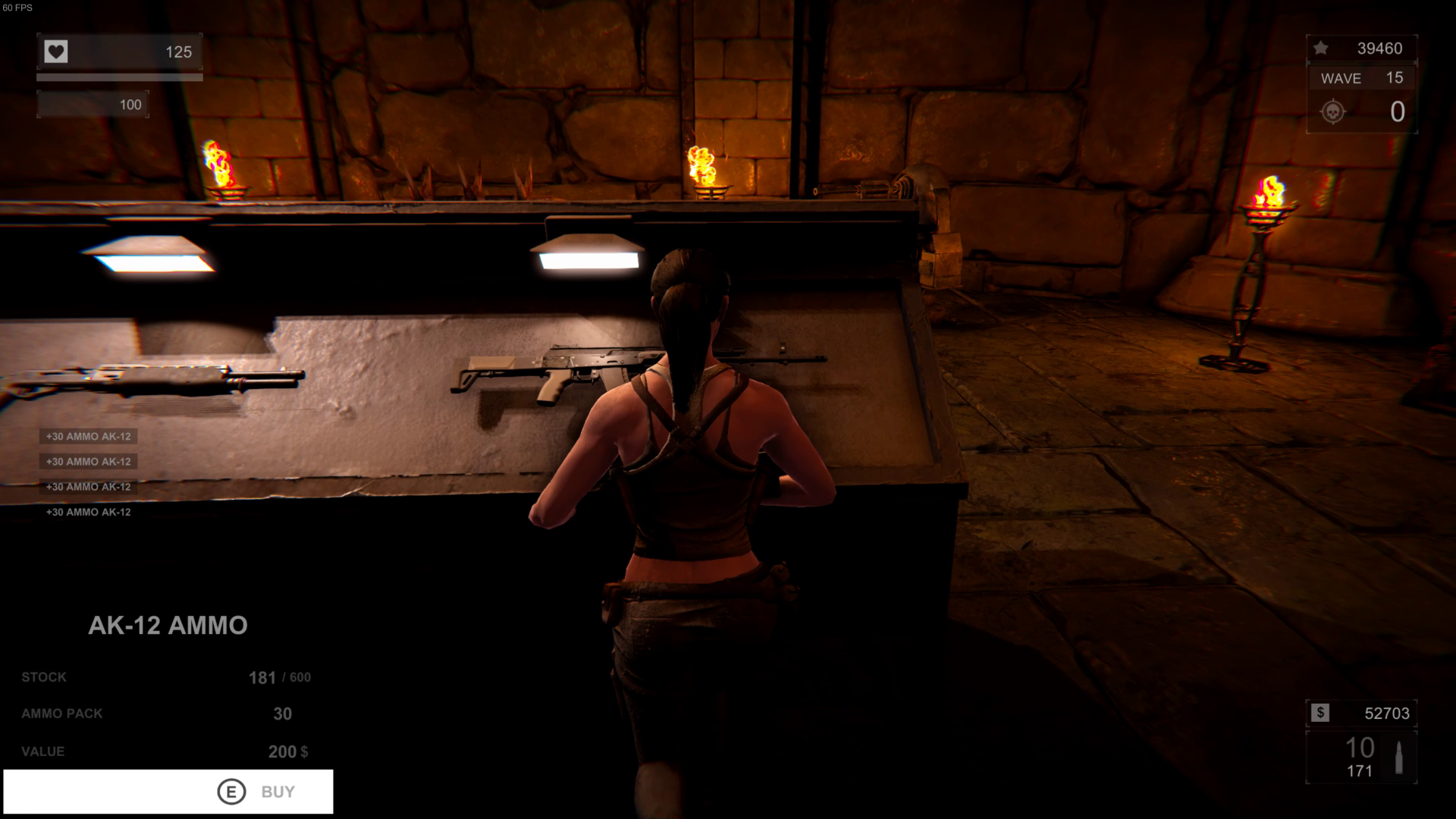 Blood Waves is a disappointing survival TPS that offers very limited content, and not very good quality content at that. Even if the base mechanics kind of work, it still is not recommended to get a game that becomes stale after only a few hours. It’s simply not enjoyable.